The grand staircase inside the new BOSS.architecture build featured in our current issue is a case study in patience, flexibility, and teamwork.

What’s in a staircase? In the case of the Whalen house designed by BOSS.architecture featured in our current issue, quite a lot. More specifically, a five trade collaborative effort, a heavy load of logistical precision, and about two months of creative problem-solving.

Featured in our current fall issue, the Whalen house in a new Cherry Creek neighborhood called Cedar Estates was designed be focused inward, creating a sanctuary for the Whalen family. To that effect, there are no windows visible on the front facade. “That’s super unusual,” BOSS cofounder Kevin Stephenson says, “but you don’t feel confined by the move. In fact, once you are inside, it feels like a very open, light-filled home. Creating moments when you can look across the courtyard into another room and beyond allows you to focus on internally and on the living condition.” 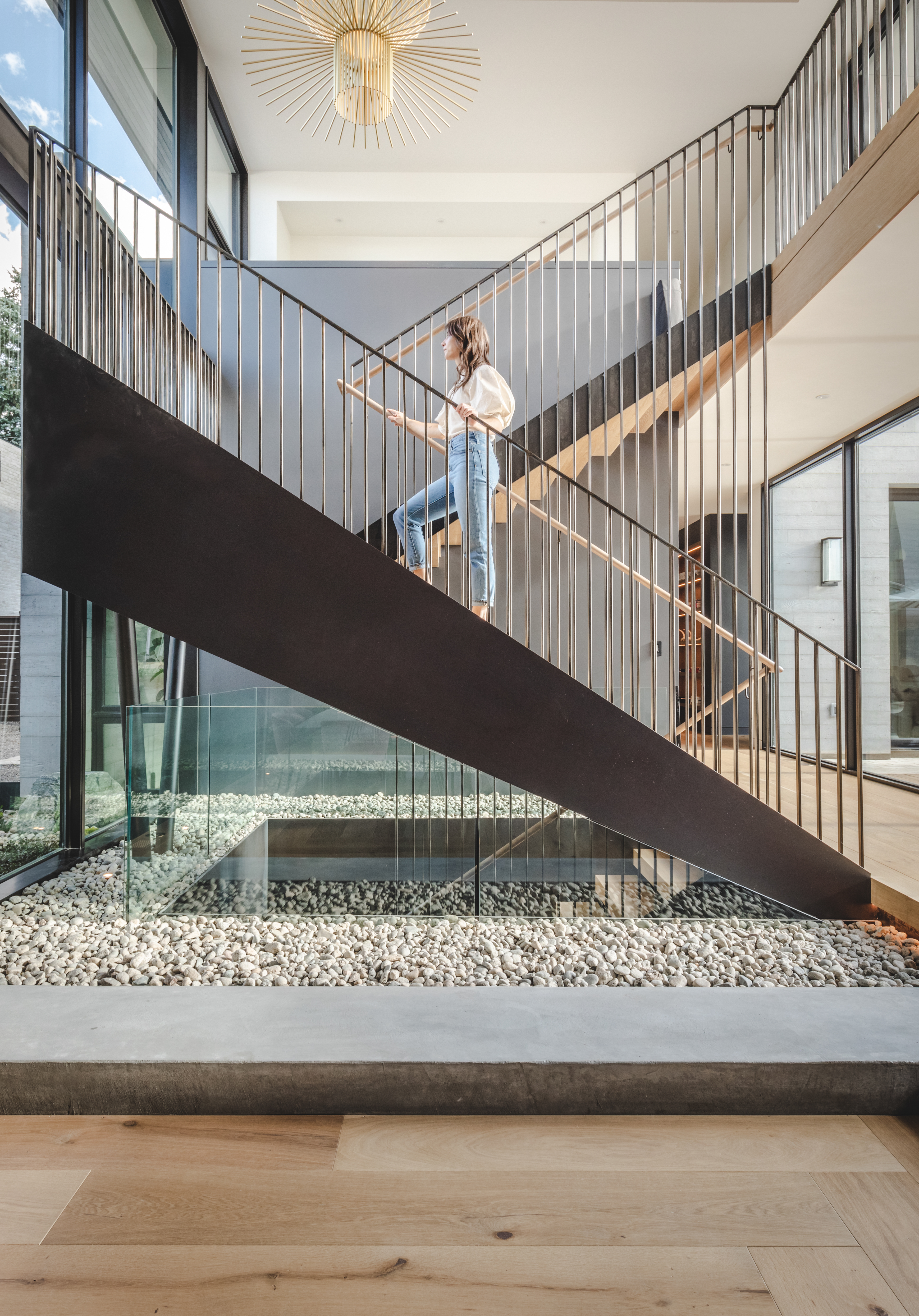 Inside the BOSS team wanted the staircase, a feature that’s often overlooked, to make a statement. “We wanted the stairway to feel like a piece of sculpture versus just a set of stairs,” says Chris Davis, cofounder of BOSS.architecture. “The idea was to have a stringer (the structural support for the stair treads) that looked like a big steel wedge, almost like a piece of art inspired by Alexander Calder or Richard Serra.” The ensuing design was a staircase suspended from the ceiling with a wedge-shaped steel stringer, 27 interior posts spanning all three stories, and encircled by a glass-framed water feature that, in later stages, was filled instead with stones.

With this grand vision as its guiding light, Montare Builders and its owner Jeremy Larson set out to bring the staircase to life, but there were several challenges along the way. First, there was difficulty finding a local company to cut a single piece of half-inch plate steel to achieve the “big steel wedge effect.” After briefly considering shipping the peice to Seattle to be cut, the team finally found Omnicut, who used its water jet technology to trim the piece to its final size—around 1500 lbs. Then, instead of suspending the stairs from the ceiling like in the original plan, the team felt that any swaying of the staircase might be an issue for the Whalen’s 2 year-old daughter Lennon and opted instead to anchor the piece to the walls. It was also due to safety concerns that the water feature was ultimately abandoned for stone (although the owners briefly entertained the idea of putting plastic balls from a ball pit in the basement). Then there was trouble installing the railings. To accommodate the longest railing that runs the full length of all three floors (about 22-23ft), a hole had to be cut in the ceiling to be able to get the rail into place. But ultimately, the team overcame every setback and Montare was able to skillfully bring together all of the pieces and players to get the job done right. 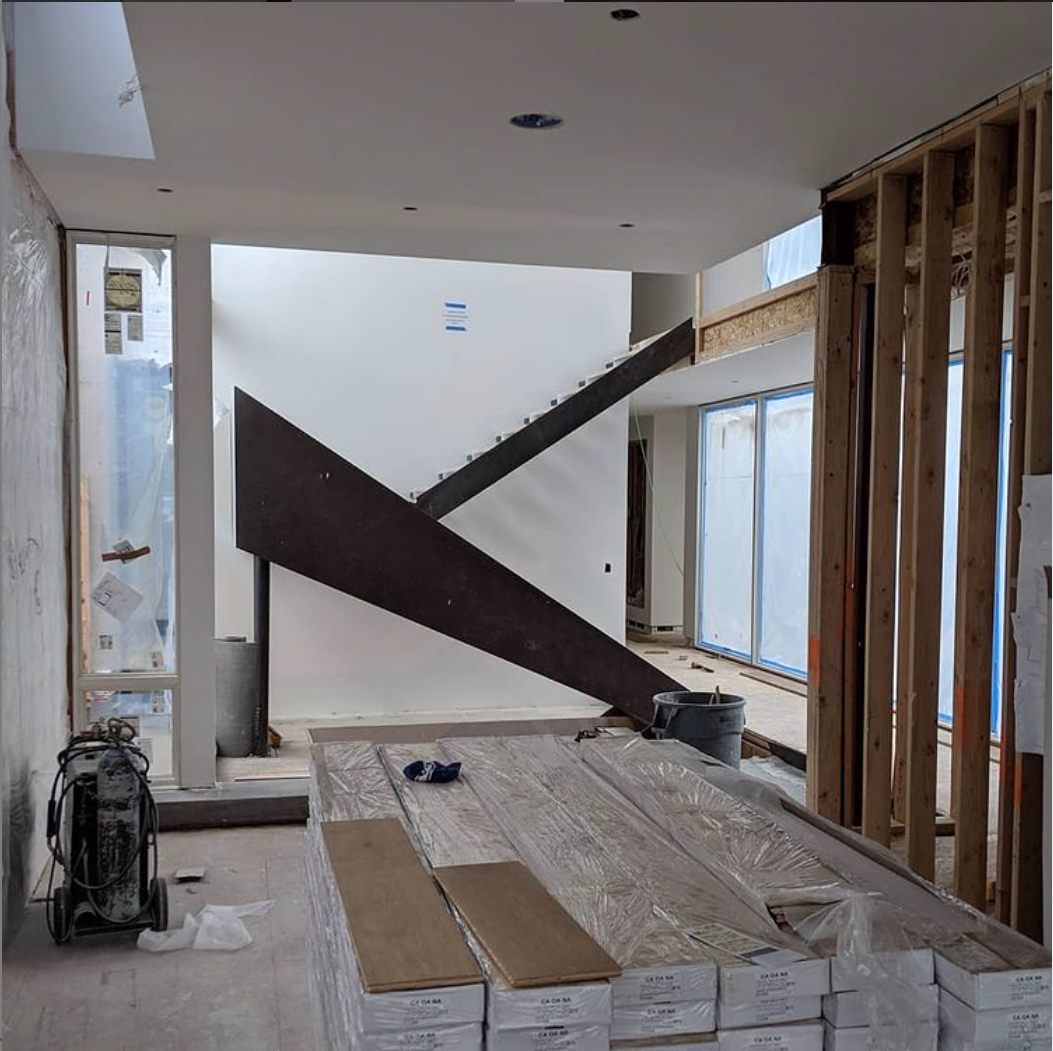 “It was definitely the most difficult staircase I’ve built,” says Larson who has about 15 years in the industry, “but it was truly a team effort.” Just the staircase project involved six different trade companies from around town: Omnicut, SJS Construction, Rock Solid Hardwoods, Baron Glass, Taylored Iron, and Fineline Painting, with Montare Builders overseeing each step to ensure the architectural vision was being manifested at each stage. All in, Larson estimates that from the shop drawings to finishing touches, it took about 1.5-2 months to execute the design of the staircase.

But the finished product was worth all the extra effort. “It’s really a piece of art,” says Larson. “The BOSS team was so meticulous in its design that the staircase has become a focal point of the home.” 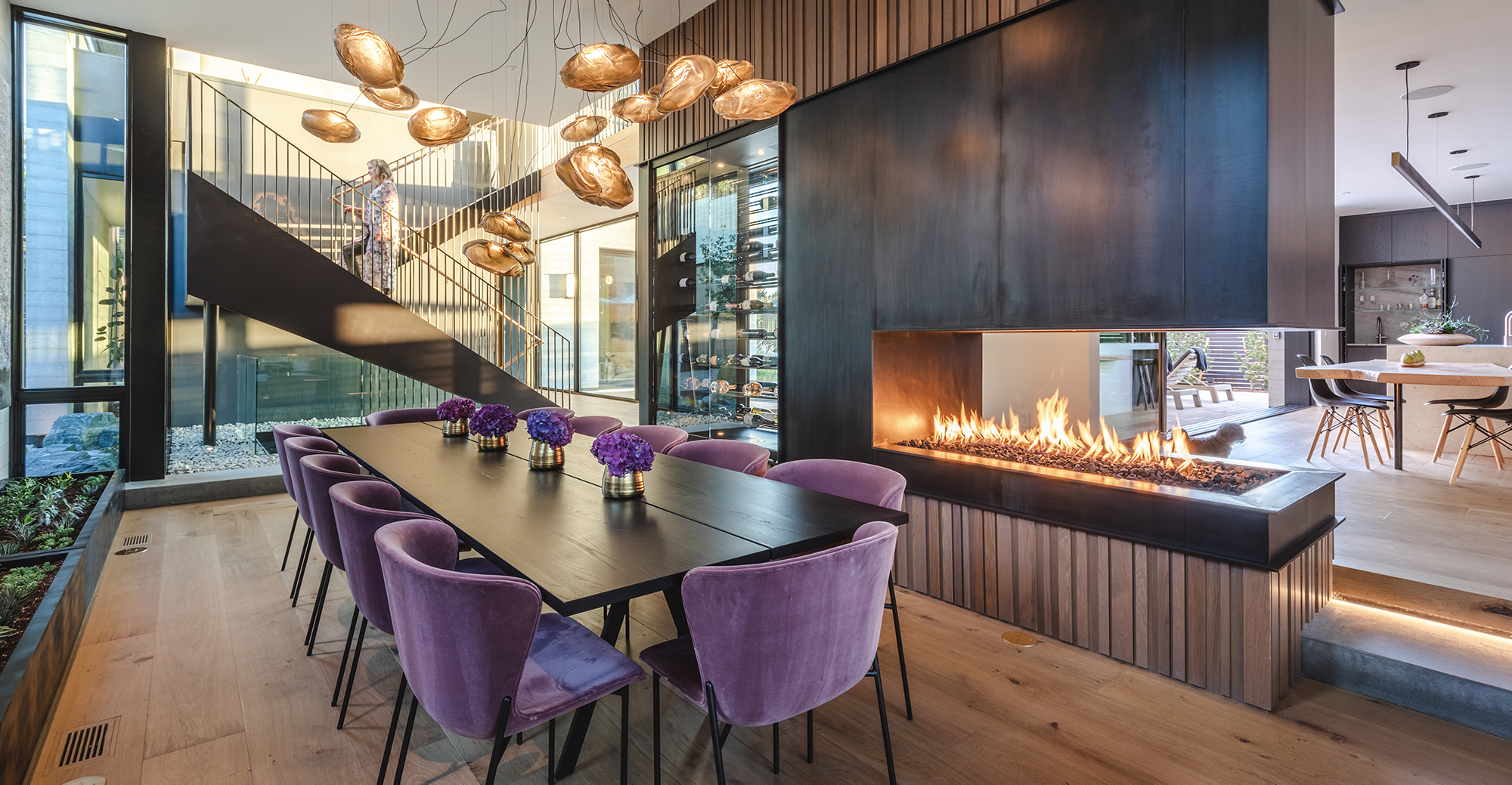