Acquilano has turned the traditional notion of a workspace upside down with its innovative designs for the new CiviCO and Rallyday Partners spaces.

ACQUILANO THREW OUT THAT PART OF THE DICTIONARY WHEN IT DESIGNED THE NEW OFFICES OF CIVICO AND ITS OFFSHOOT, RALLYDAY PARTNERS.

Instead, the Acquilano team focused on words like these: Inspiring. Flexible. Unpredictable. Synergistic. Welcoming. 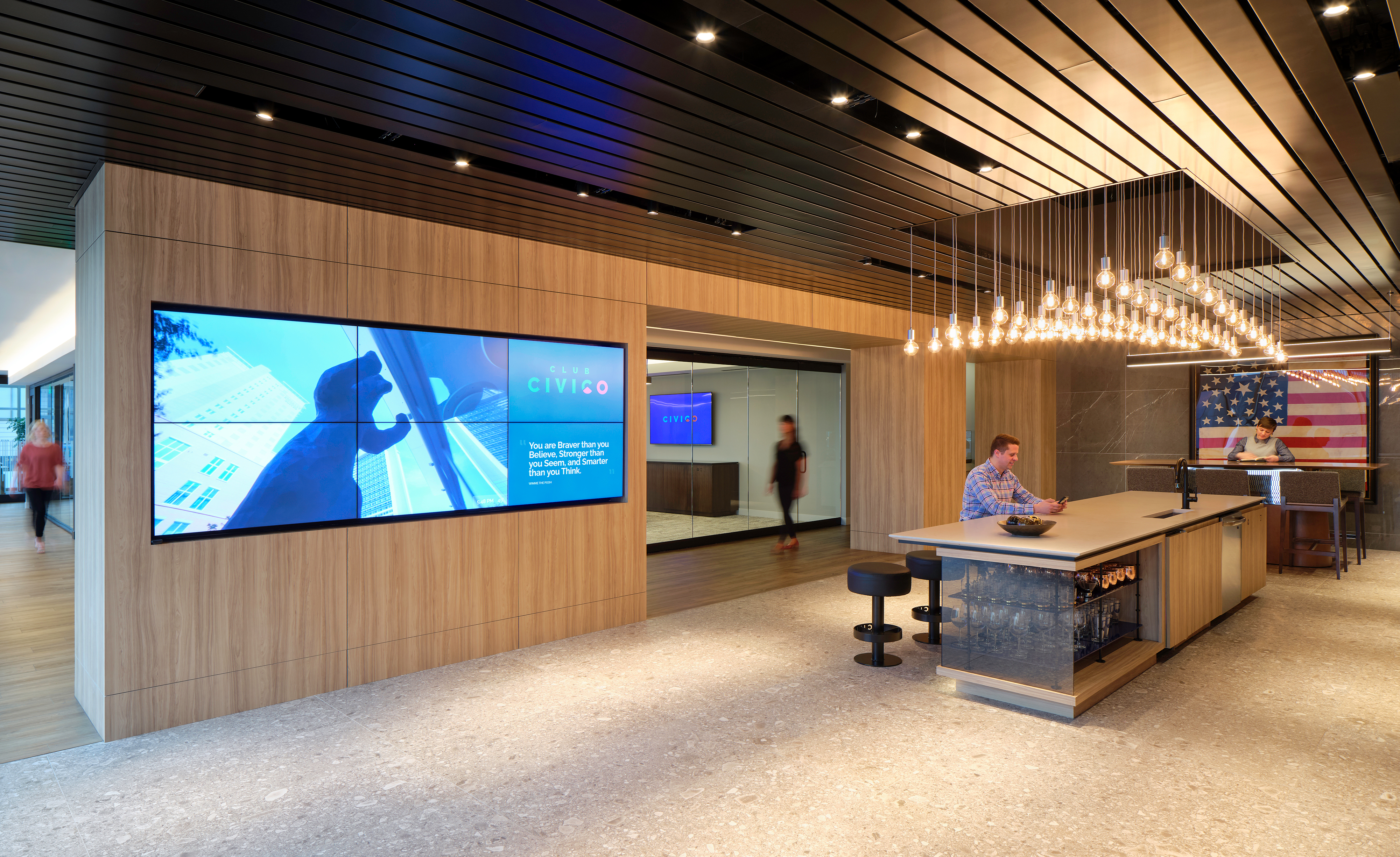 This is definitely not your usual office entryway. At CiviCO, visitors are greeted not with a reception desk but with a huge digital wall by Four Winds Interactive showing images of Colorado and a bar space (complete with swiveling bar stools and a unique wave-patterned light fixture). Image: Cooperthwaite Productions

Both are bold, out-of-the-box organizations—and that’s the vibe they wanted in their offices. The CiviCO space includes a unique entry that eschews the typical reception desk for a bar and includes a central learning center, as well as conference rooms that can expand and contract via movable glass walls to accommodate leadership training programs and other large events. “Flexibility is the key to it all,” says Marcus Appleby, the Acquilano project architect who oversaw the designs.

“I didn’t want the spaces to feel snooty,” says Ryan Heckman, chairman of CiviCO and a co-founder of Rallyday Partners. “I wanted them to be accessible and inclusive. We want people to come in feeling one way and to leave feeling happy and inspired. That was really the emotion we were going for.”

When CiviCO hired Acquilano, a Denver interior architecture firm, known for its notable headquarter projects for companies including DaVita, Janus Henderson Investors, and RE/MAX, it offered one directive: Go for it. It was an architect’s dream assignment. “Ryan’s the first client who has ever said at the first meeting, ‘I hired you for a reason. I trust you. You know what this organization is about. Do what you think is right,’” says Appleby. “He is a former Olympian (Heckman competed in the Nordic combined event in the 1992 Winter Games in Albertville, Canada), and he has an Olympian’s personality: He wanted to go fast and go big. He wanted the space to feel exciting. He wanted someone who stepped into the CiviCO office to immediately get that impression.”

That feeling starts with the entry. Walk in and you instantly face a huge digital wall from Four Winds Interactive that has a video loop of inspiring images of Colorado. “There’s no obstruction when you walk into the space, so the video wall almost invites you in,” says Heckman. “It’s a lot of motion, showing people playing, leading, and learning in our state.” 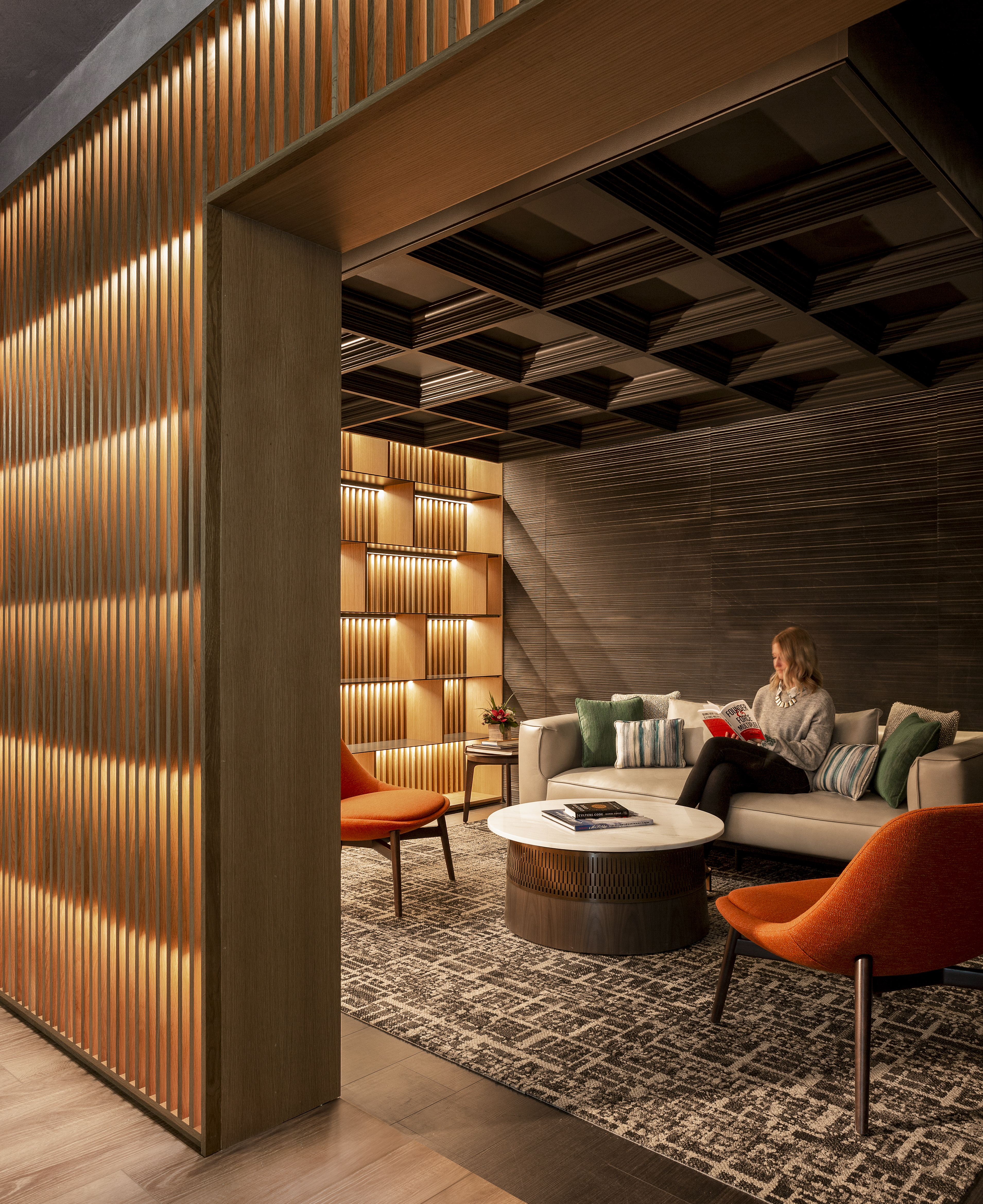 The next thing visitors see: instead of a reception desk, a bar space. “The bar was a fixation of mine,” says Heckman. “I wanted it to have authentic bar stools, bolted to the ground. I have a theory that people talk differently when they’re on chairlifts or when they’re at a bar. Somehow sitting side by side and sharing an experience together creates a certain intimacy. And as you sit at the bar, you look up at the ‘We and Me’ art fixture. It inspires a different mindset: not to be focused on yourself but to be focused on what you can do in Colorado for Colorado. And then to the side is the state flag that hung over the Capitol when we became a state in 1876. The idea was that no matter where you looked, you couldn’t hide from inspiration. The whole space is playfully classic—and authentically Colorado.”

Above the bar is a light fixture hung in the shape of a wave. “Every component of the space is intentional,” says Acquilano project designer Sydney Madison. “The island is highly customized, and the light fixture grounds the whole space. It is sculptural in form so not only is it providing light, but it’s almost like artwork.”

Those entryway pieces are emblematic of the art throughout the offices. “A huge component of the project was CiviCO’s partnership with local artists, as well as the History of Colorado Museum,” says Appleby. Throughout the space are commissioned pieces, as well as artifacts like vintage photos of the Tenth Mountain Division in the hallway. 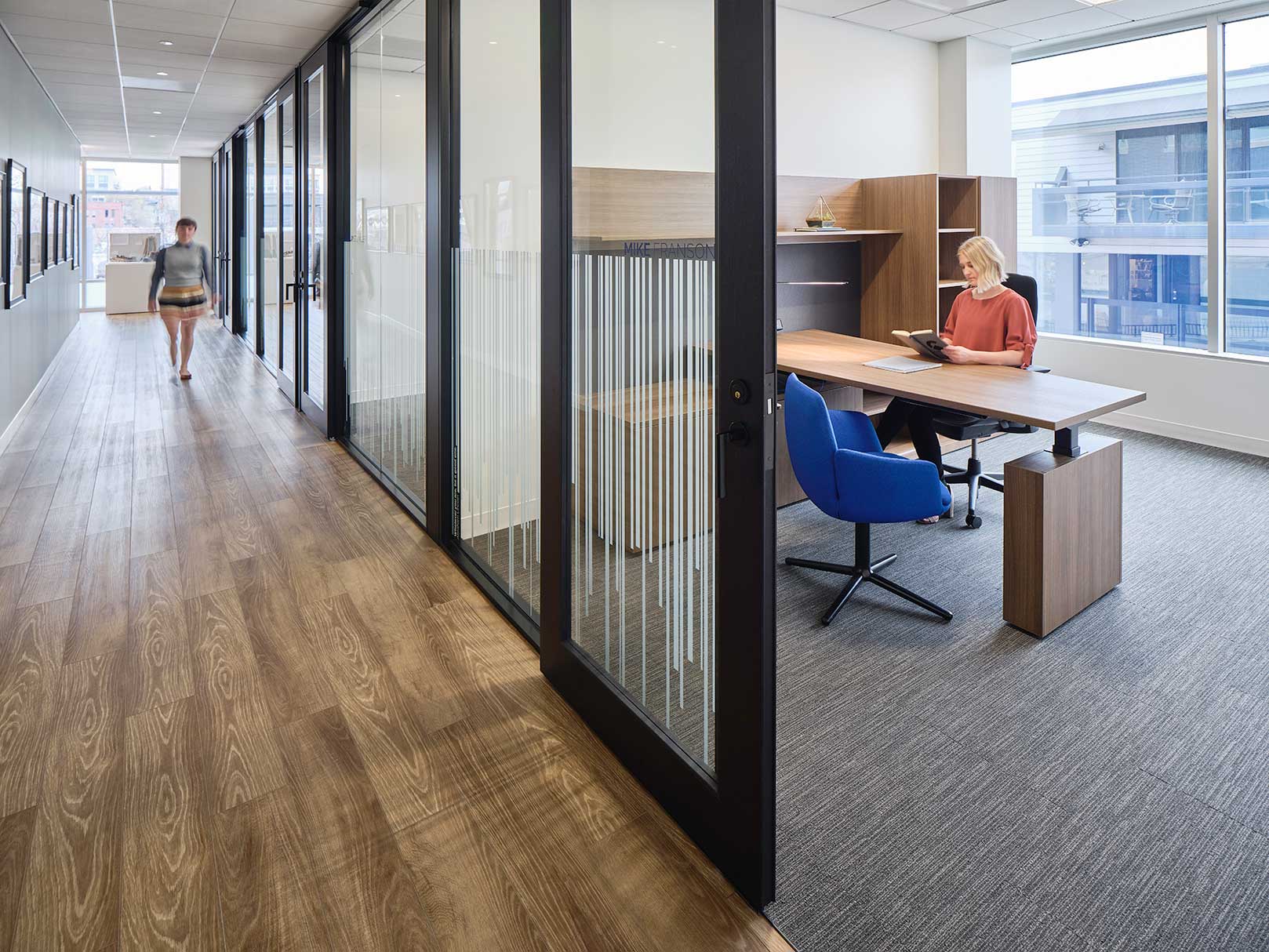 The art includes what Heckman refers to as an “architectural tattoo” for the space. “We hired an artist named Anthony Garcia, who has spent the last 20 years covering up gang-related graffiti with inspiring graffiti. The notion is to replace something very negative with art that is very positive. We just gave him a massive wall and said, ‘Make this. Do your thing. And make it about Colorado.’ ”

Throughout both spaces, Madison says, there are also subtler nods to CiviCO’s and Rallyday’s energies. “We wanted the finishes and textures to excite a whole breadth of generations of diverse individuals. We wanted it to feel fresh for younger, up-and-coming leaders but also to have a sense of sophistication for those who are more established. So while the textures all feel modern and fresh, the stone and woods really bring out a warm character to compliment the timeless feel.”

Indeed, the guests and events in the space have been wide-ranging, from Mayor Hancock to former Gov. John Hickenlooper, a co-founder in 1999 of CiviCO’s predecessor, Quarterly Forum. “We held over 260 events for nonprofits and other civic organizations in our space last year,” says Heckman, including Hickenlooper’s announcement of his 2020 presidential run and a mayoral debate. “We wanted a place where community leaders could host events that would elevate their sense of possibility, their sense of impact, their connectedness to Colorado values.”

Custom touches throughout include lighting that changes color from cool to warm and custom graphics on the glass office fronts (about 20 former CEOs and community leaders have permanent offices in the CiviCO space) that depict Colorado’s unique topography. “The abstracted linear pattern could be interpreted in multiple ways such as Colorado city skylines to mountain formations. They represent the entire state from the eastern planes to the western slope,” says Appleby. “We also wanted to personalize each office, so every person was asked to provide a quote they found powerful and motivational, to provide a bit more identity and context to who they are as a person.” 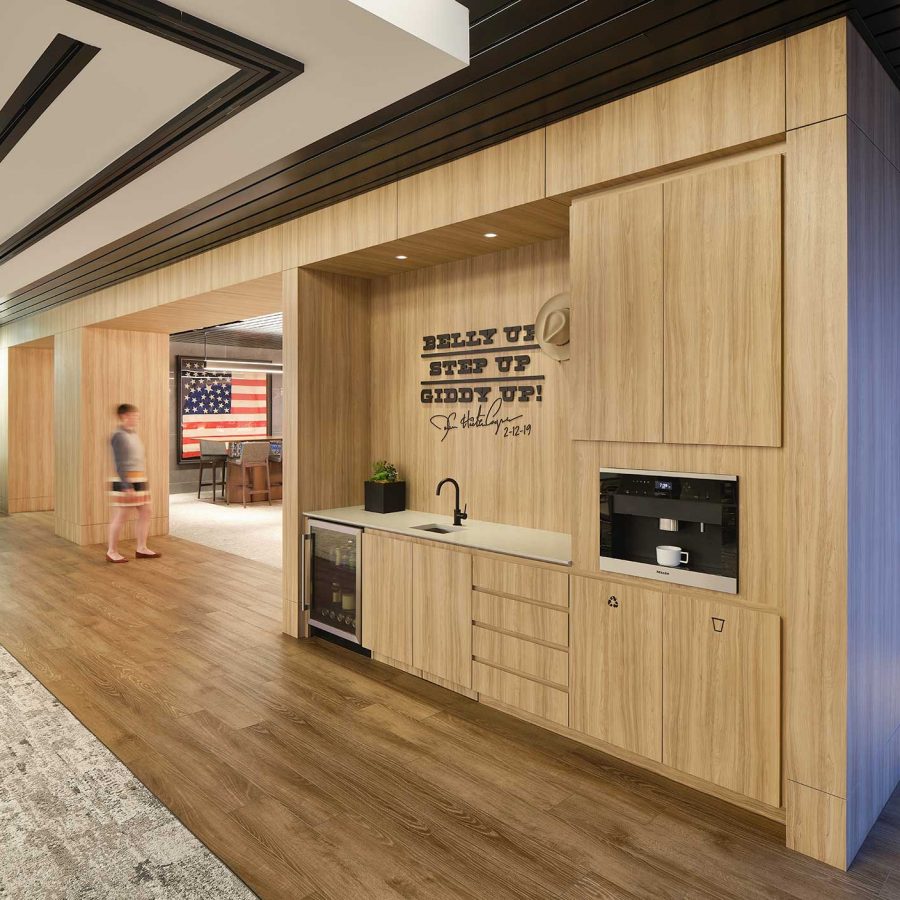 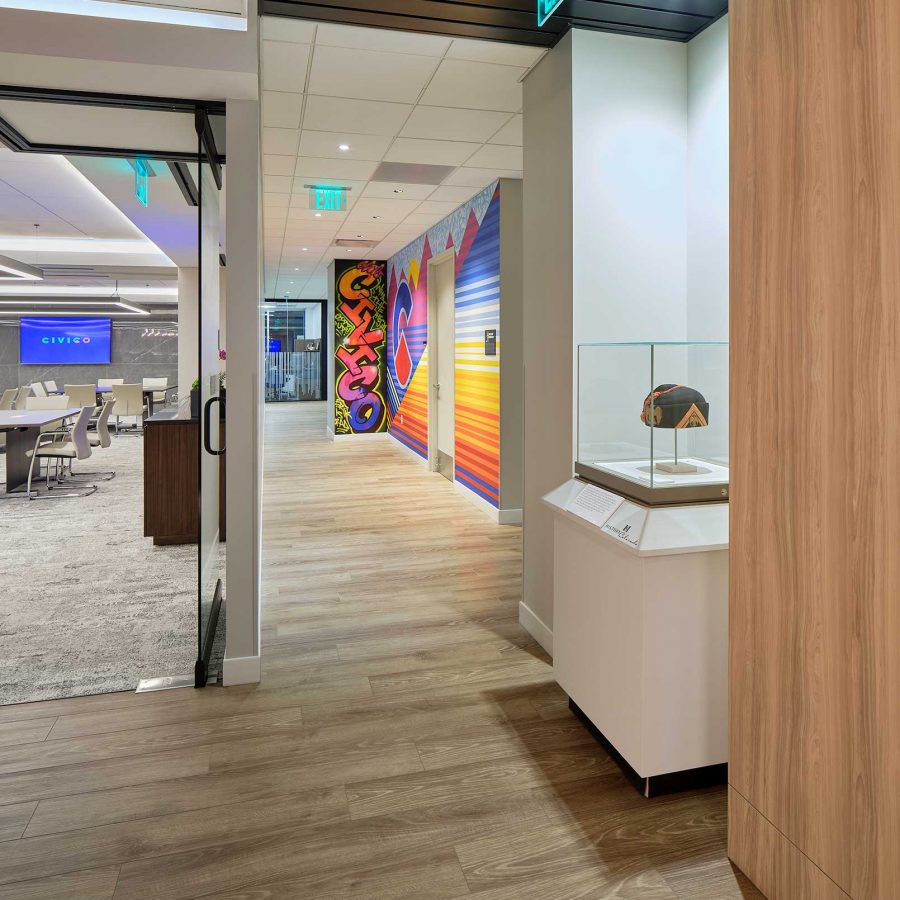 In addition to offices and conference rooms, says Heckman, “We have a lot of lingering spaces—places for people to be on their phones or just hang out. We wanted our tenants to feel like this was their hideaway. A lot of them, as former CEOs, have a lot of demands on their lives. We wanted to create a space that was designed for their wellbeing and care.”

After the groundbreaking CiviCO offices were complete, Acquilano was given a new assignment: “About a year after building that space, Ryan said, ‘Let’s play off what we’ve created here with this organization full of leaders and create a for-profit venture capital firm. And let’s connect the two spaces.”

The initial challenge, says Heckman, “was that the potential Rallyday space was fairly small, but because we had such a great entry/exit to the CiviCO bar and common area, we thought, ‘How cool would it be if we actually embedded Rallyday into the CiviCO space?’ We realized that there’s some cool symmetr —and some nice symbolism, too—to having a for-profit entity under the same roof as a nonprofit entity.”

Using many of the same wood tones and coloration as in CiviCO, Acquilano designed the Rallyday space “to be inviting to other entrepreneurs who wanted to build great businesses,” says Heckman. “We wanted it to be different from typical financial services organizations, which can be formal, stuffy, and opulent. We wanted this space to give people a sense of possibility, to make them feel at once elevated, comfortable, and excited about the future. I even wanted to get a couple of disco balls in there because business at its highest level should be as much about your right brain as your left brain—but I was overruled. But when you are really at the peak of your game in business, you should enjoy coming to work, and work should enjoy you being there.”

Despite the symbiosis between the two organizations, Rallyday’s purpose was fundamentally different from CiviCO’s and Acquilano wanted to ref lect those differences. “Ryan wanted the Rallday office to metaphorically express the sequence of forming a business relationship. It is a long and narrow space, and we wanted the sequential layout of elements to reflect how this relationship is built.” 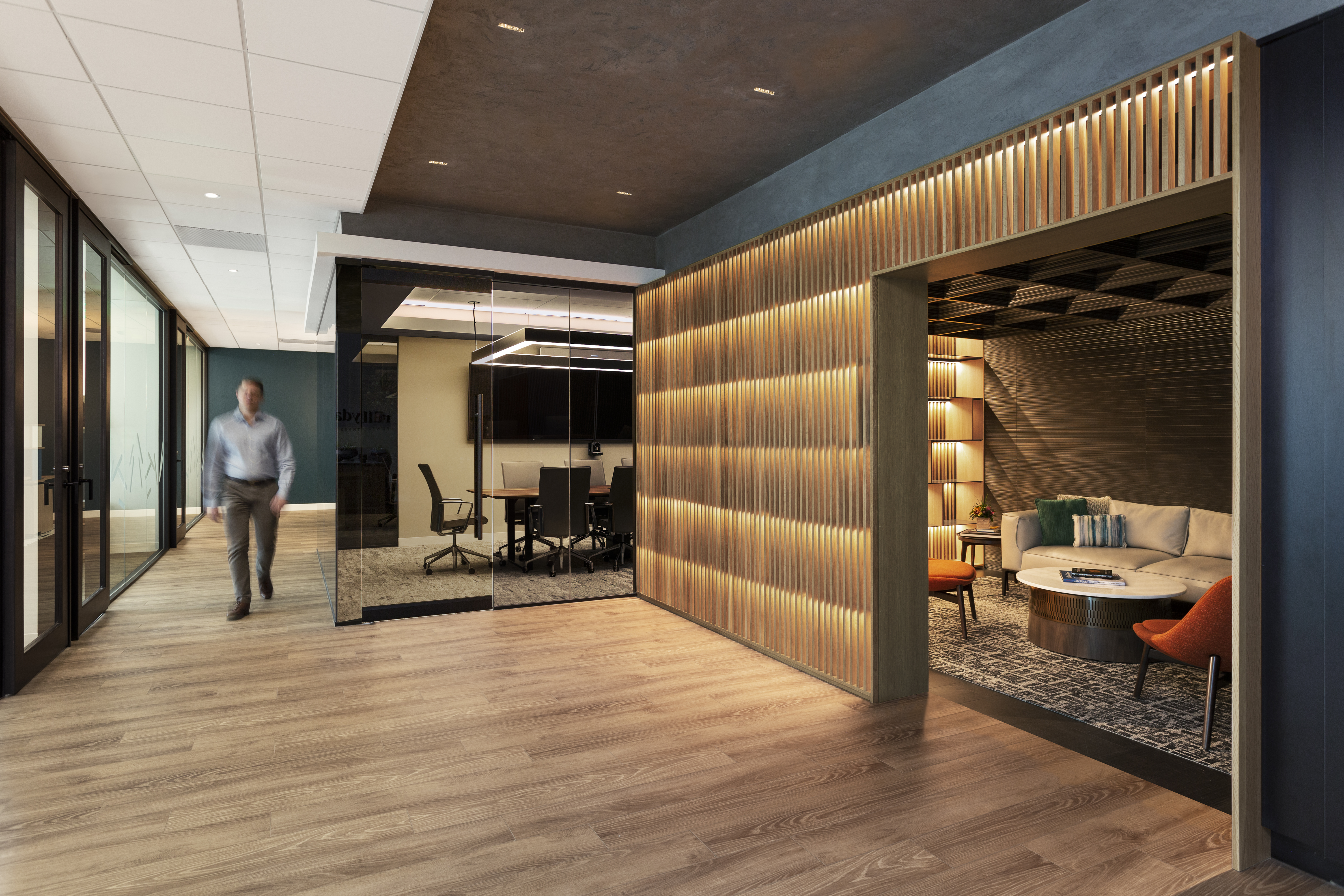 The Rallyday offices are entered through the CiviCO offices. Instead of a formal reception desk, visitors quickly come upon the leadership library (seen in all three photos). It has no door and the outer walls are made of vertical slats to telegraph the notion of transparency; the inside feels intimate and protected, to encourage close conversations. Photo: Jess Blackwell

So when you walk into the Rallyday space, which you access through the CiviCO offices, you find a self-serve island where you can get yourself coffee and casually talk to someone, like an informal introduction.

Next to that is the leadership library, which is really the heart of the space. “It represents the second part of a business relationship: sitting down and having an intimate conversation with someone,” says Appleby. “Ryan felt like one of the most important parts is just getting to know someone on a real level, so we wanted this space to feel somewhat open. There is no door, and the outer walls are made of slats, which provide a sense of transparency. If you are standing straight on, you can see into the space, but if you are down the hall, there is a perception of privacy. There are no down lights; the sources of light are all concealed. We wanted the lounge to feel protected for intimate conversations.”

On one side of the lounge is a wall of custom slatted bookshelves, which physically intersect with the conference room. “That represents the third part of the business relationship, the traditional idea of ‘let’s get this deal done,’ ” says Appleby. “We wanted to continue the theme of celebrating local artists and craftsmen, so the table is custom made by Art Builders Guild, a local furniture fabricator.” The conference room is used not only for meetings but also as a “touchdown space” where employees have an extra place to work. There are also eight permanent offices for employees of the firm, including the founders.

“In both of these spaces, I wanted a sense of wow,” says Heckman. “It’s all about being uplifting and being a little different. There’s a lot of gray out there. I wanted to speak to people’s souls first, then their hearts, and then their brains, in that order. Architecture is a funny thing. A space can either take or give, and these spaces give.”

SEE THIS STORY IN PRINT 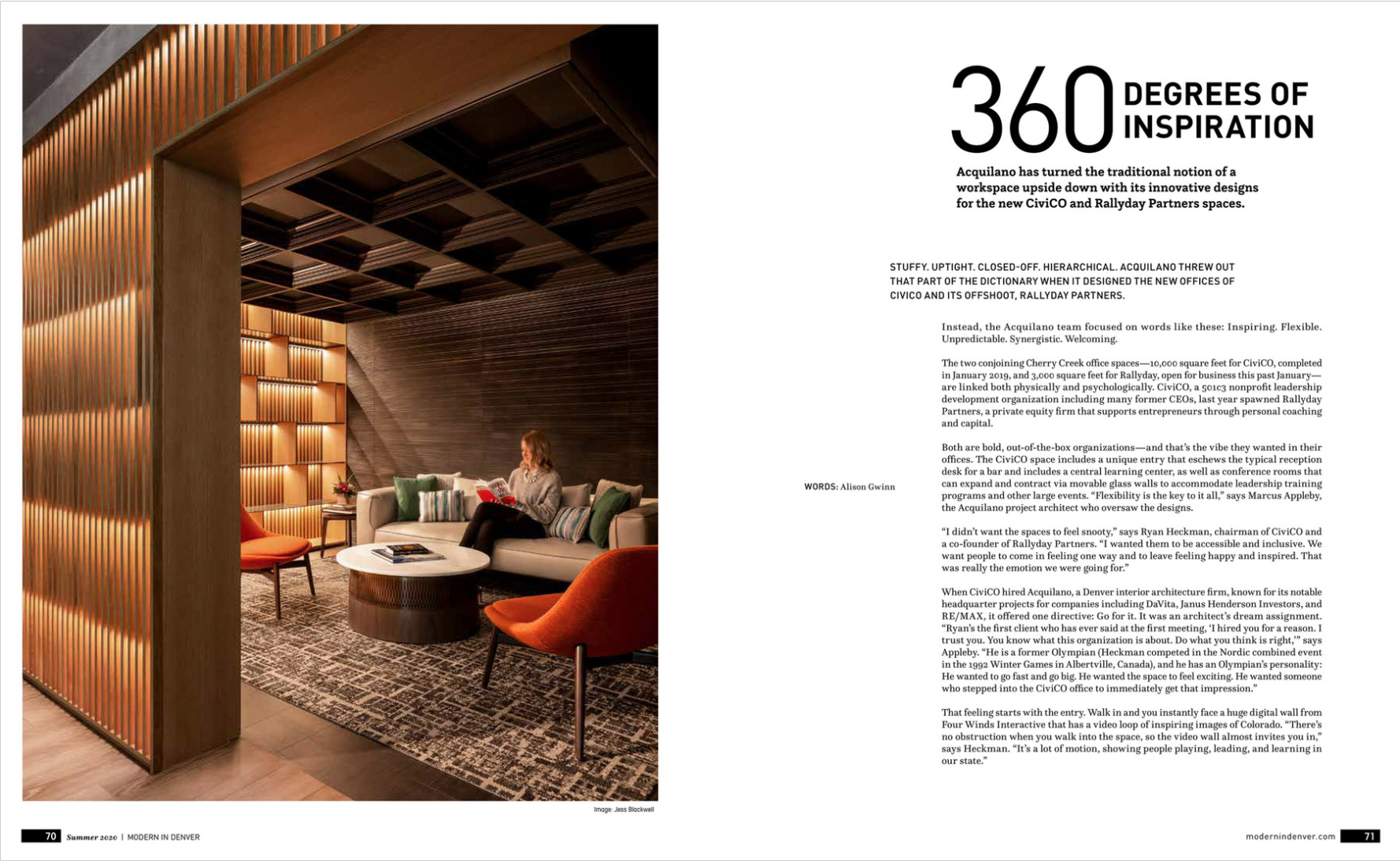