the chef + the recipe + the tools + our camera

Sinking our teeth into more than the food.

Chef Mark Fischer is a self-described “reluctant restaurateur.” A native Pennsylvanian (where he grew up and received his culinary training), Fischer relocated to Aspen in 1991. He opened the first of his restaurants, Carbondale’s Six89, in 1998. He never planned on the barrage of opportunities that would come with his success at Six89, but when opportunity knocked Fischer answered. In 2002 he opened the original Phat Thai in Carbondale, followed by The Pullman in Glenwood Springs in early 2011 and Denver’s Phat Thai in late 2011. Business partners of the Denver Phat Thai include Graham Hardy, David Mosteller and Lari Goode.

With his unanticipated expansion and his subsequent transformation into entrepreneur, Fischer has found it important as ever to make sure he spends time in the kitchen. “I like to think of myself as a cook at heart,” he says. “I get frustrated because as we grow it means I get to spend less and less time in the kitchen.” 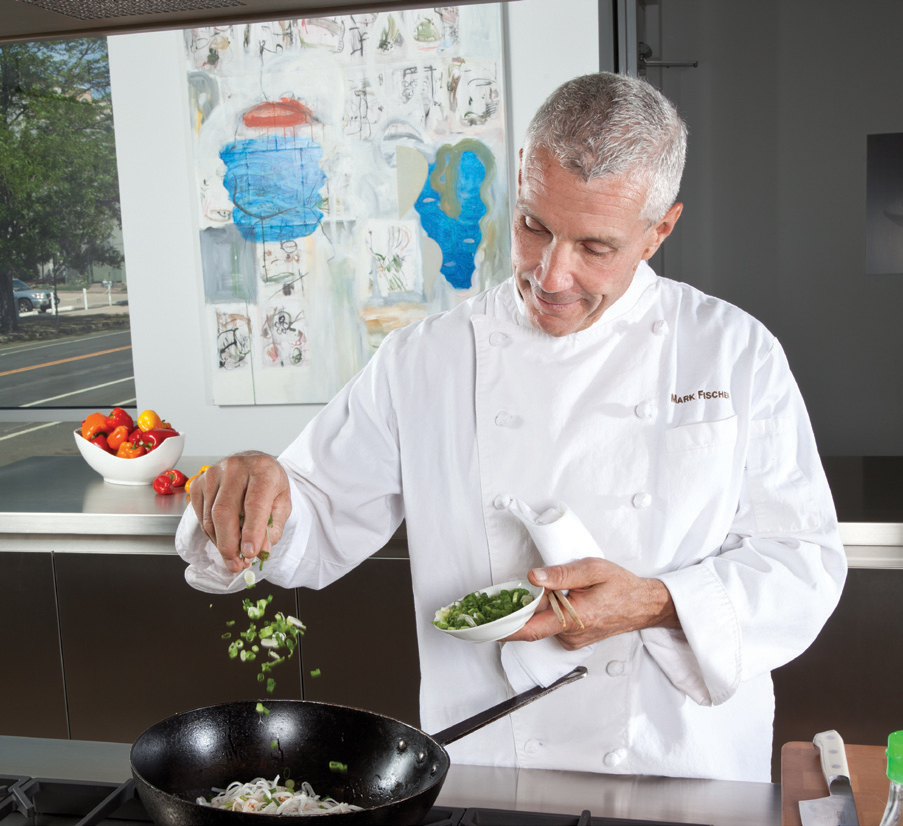 If 2012 finds Fischer away from the kitchen more than he’d prefer, rewind 10 years to 2002 we’d find Fischer being forced to spend a LOT of time in the kitchen mastering a whole new set of techniques and ingredients. Six89 was flourishing, and when a restaurant space became available just down the street Fischer was approached about embarking on a new project. “Suddenly we found ourselves with this new restaurant space, but not really sure what we were going to do with it. We knew we didn’t want to do anything that competed with Six89,” he recalls. “My wife had always been incredibly fond of Thai food, which in our estimation was a concept that was really being underserved on the Western Slope. So we thought that might be a good place to start.”

With the direction of the new project decided, Fischer began an unexpected second phase of his culinary education. “My being classically trained, I literally knew nothing about it. So I embarked on this journey to understand how Malaysian cooking works, how Thai cooking works, how Vietnamese cooking works.”

He called upon the unofficial fraternity of the chef to get started. “The restaurant community’s really cool in as much as you can pick up the phone and call pretty much anyone and say ‘Can I come hang out?’ As long as you can get them on the phone they’re almost always like ‘Yeah, show up.’ So that’s what I did with this Australian chef, David Thompson. It really helped me get a grip.”

A demand at Carbondale’s Phat Thai that far exceeded his initial expectations also helped Fischer get a grip. “When the equation goes from the expected 20 diners a night to 200 diners a night the learning curve is pretty steep,” says the chef. “You spend six weeks elbow to elbow with a guy from Laos, sharing the same cutting board, the learning curve is pretty steep.”

Fischer spent six months traveling and cooking in Southeast Asia. From that experience he acquired an understanding not just of the ingredients and techniques he encountered, but the cultural and geographical significance behind the food he was preparing. “It’s as much religious as it is geographic. In the south of Thailand you see tons of coconut milk, in the north of Thailand there’s none. It’s just based on what grows there. But then, on the religious side, you’ll see a lot more lamb where people won’t eat beef. It’s fascinating.”

As it turns out, this approach to cooking israther complimentary to Fischer’s search for balance between business and kitchen. “In most Southeast Asian cooking it’s all about balancing,” he says. “It’s typically – for lack of a better term – a one-dish meal. So you’ve got this bowl of stuff that needs to achieve a balance between spicy and sweet, sour and bitter.”

In the spirit of allowing each diner to find a perfect balance of flavors, the condiments at Phat Thai are a little more involved than your standard issue salt and pepper. “The condiments allow you to balance dishes in a way that suits your palate best – salty, sour, spicy or sweet. We serve a dish the way that we think presents it in the best light, but you may have a palate that’s slightly saltier. So please, customize your dish in a way that tastes best to you.” 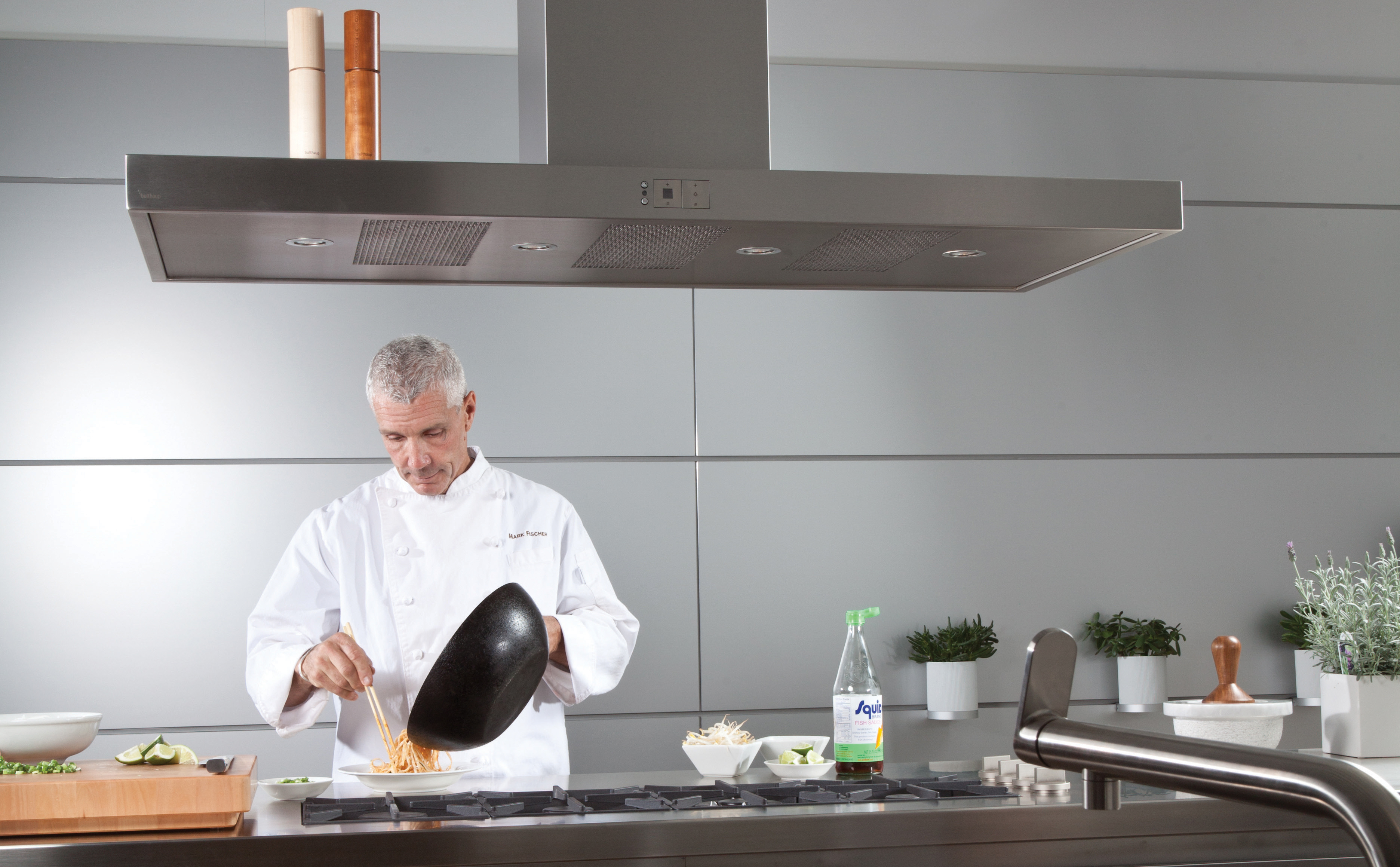 As we sit on the balcony that Friday afternoon Fischer reflects on the journey that has brought him to this moment. He admits that there’s been a bit of a struggle with the acceptance of Phat Thai’s identity as a restaurant with dishes prepared in the Southeast Asian tradition, but not all exact reproductions of what you’d find in Thailand. “In spite of our name, we’re not a Thai restaurant,” he states in his defense. “Some of our dishes are totally legit. The Pad (Phat) Thai, the Papaya Salad, our curries are all totally legit. It’s really been a challenge for me to try to impress upon people that while the foundation of our philosophy is based on the idea of balancing flavors and using the ingredients found in Thai and Vietnamese pantries, but ultimately the goal here is just to serve really tasty food.”

So, Chef Fischer, would you do it all again – struggles and all?

“You go to a classical cooking school and they don’t teach you about galangal, shrimp paste, dried scallops. Doing this project was awesome in the sense that it tripled my repertoire of ingredients and flavors. When you cook classically – from the western perspective – to have learned the eastern approach to things…That was one of the best things that happened to me as a chef.”

Denver’s bulthaup showroom is a dream come true for home cooks with an eye for modern elegance.

When it comes to kitchens, bulthaup has long been among companies setting the industry standard in both quality and design. Founded by Martin Bulthaup in 1949 as a furniture factory in the German Alps, the company quickly established a reputation for quality and innovation. Martin’s son, Gerd assumed leadership of the company in 1976, applying his passion for architecture and Bauhaus design principles, propelling bulthaup to the forefront of contemporary kitchen architecture. The company has since received countless design awards worldwide.

“Bulthaup – Architecture for Living Spaces.” This is the company’s motto. The heart of the home is where life happens and bulthaup prides itself on creating those spaces in the most effective, simple and elegant way possible. The company’s current CEO, grandson of Martin, Mark O. Eckert, says “bulthaup provides answers to the challenges of a changing society. We create new spaces where people feel at ease and can communicate with each other.”

Bulthaup, with showrooms all over the world, is represented in Denver and a handful of other showrooms in the United States. As beautiful as they look in photographs, there really is no comparison to experiencing a bulthaup kitchen firsthand. Touch and feel the exquisite surfaces and marvel at the precision and attention to detail. Everywhere you look there is a another perfect solution – whether it’s ventilation in a storage closet so that your mop will dry after being used, or a modular backsplash (called function boxes) that conceals everything from a sponge cubby next to your sink, to knife storage with a foldout cutting board, and even a great solution for spices – all with built-in lighting.

Chef Fischer was photographed in bulthaup Denver’s newest b3 showroom kitchen, b3 – the kitchen living space. This is like the Audi of kitchens. The layout is built around two massive stainless steel monoblock islands that run the full width of the kitchen. This design allows home cooks to work from both sides comfortably (which you’ll appreciate if you’ve ever tried to share counter space preparing a meal with a friend).

These islands are not only functional, they’re works of art. “They’re very sculptural, but at the same time they embody the definition of minimalism. Each one is a pure form, stripped down to the bare essentials,” says Jed MacKenzie, a project designer with bulthaup. Though they’re called monoblock islands, the level of detail carries down to the smallest detail – the steel was hand-soldered and finished to absolute perfection. 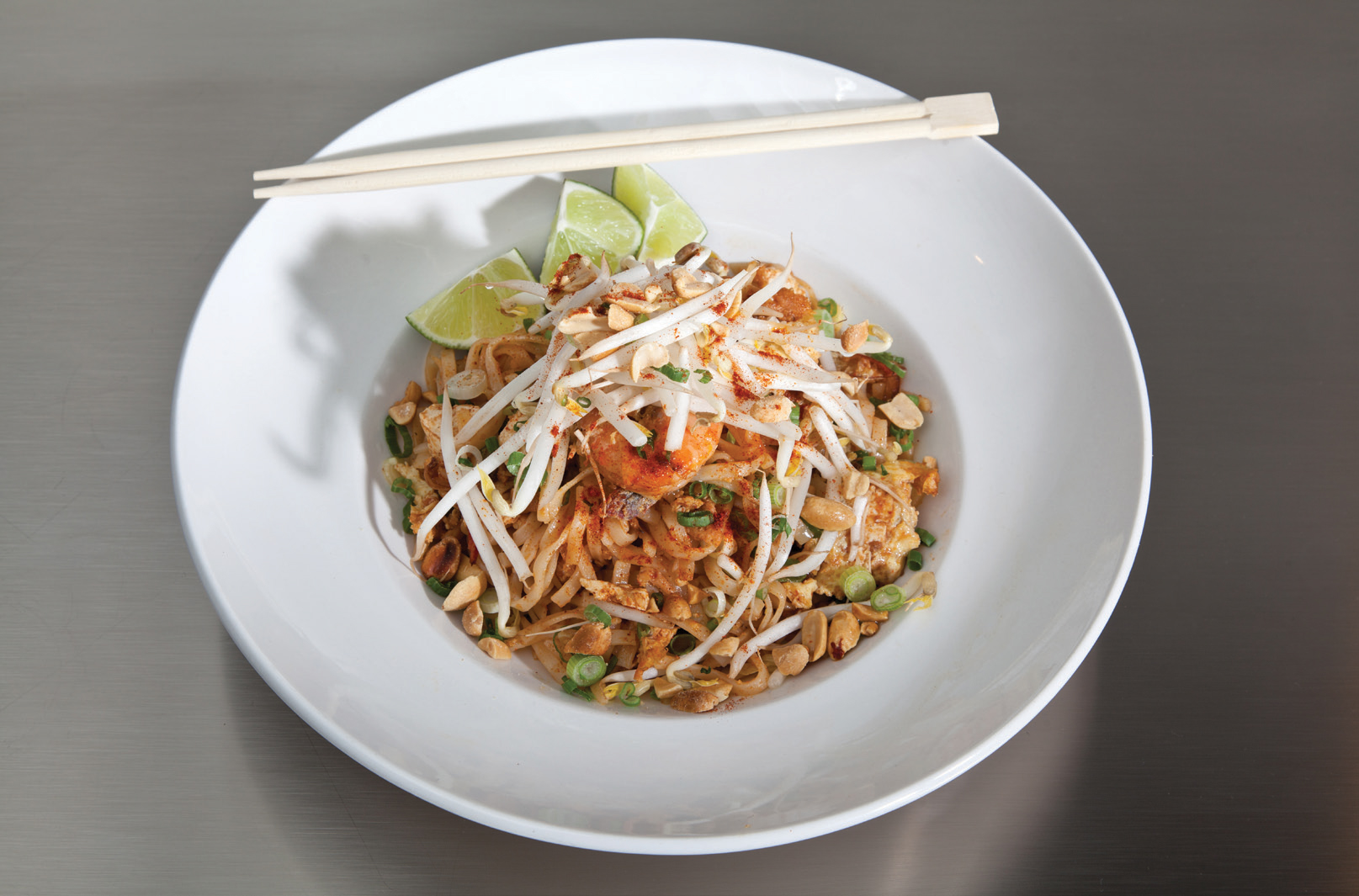 The side elevation of cabinetry features a fully-integrated Miele refrigerator blending seamlessly with the adjoining cabinets shown in Oak “structure” one of the newest bulthaup finishes. Certified by the ForestStewardship Council, this finish features the appearance of rough sawn lumber. “It adds an organic, textural element to what is otherwise very slick and streamlined,” says MacKenzie.

Between the charcoal color Oak “structure” tall cabinets an oven housing unit and wall panels are shown finished in an alpine white laminate – one of b3’s most economical specifications. The laminate and Oak “structure” contrasts beautifully with the stainless monoblock; a juxtaposition not only of materiality but also of high/low price points within the b3 line. The laminate finish looks and feels like a smooth lacquer finish, but is actually a very durable product with completely seamless edges thermally fused without the use of glue; a technology bulthaup has perfected.

The aluminum internal drawers with linoleum mats operate with electronic closures – touch to open, soft close – a feature that speaks to the level of detail within a b3 kitchen. Within some of these drawers you’ll find a walnut grid with adjustable leather pegsplaceholders for plates, bowls, cookware.

A tall pantry pullout features a soft closure – not uncommon for a cabinet drawer, but very unique on a tall pullout. Next to the pullout is a service area – completely concealed when the doors are closed, but once the pocket doors are opened and tucked away a “breakfast nook” featuring integrated outlets for small appliances (in this case an espresso machine) is revealed.

The clean lines, emphasis on proportion, functionality and aesthetics are the elements of a bulthaup kitchen that you’ll appreciate immediately, whether in a picture or in person. To really appreciate all that these kitchens have to offer would require hours exploring the nooks and crannies. Every square inch has been designed. Be prepared for two things: to be amazed and to dream about having such a kitchen every night after. 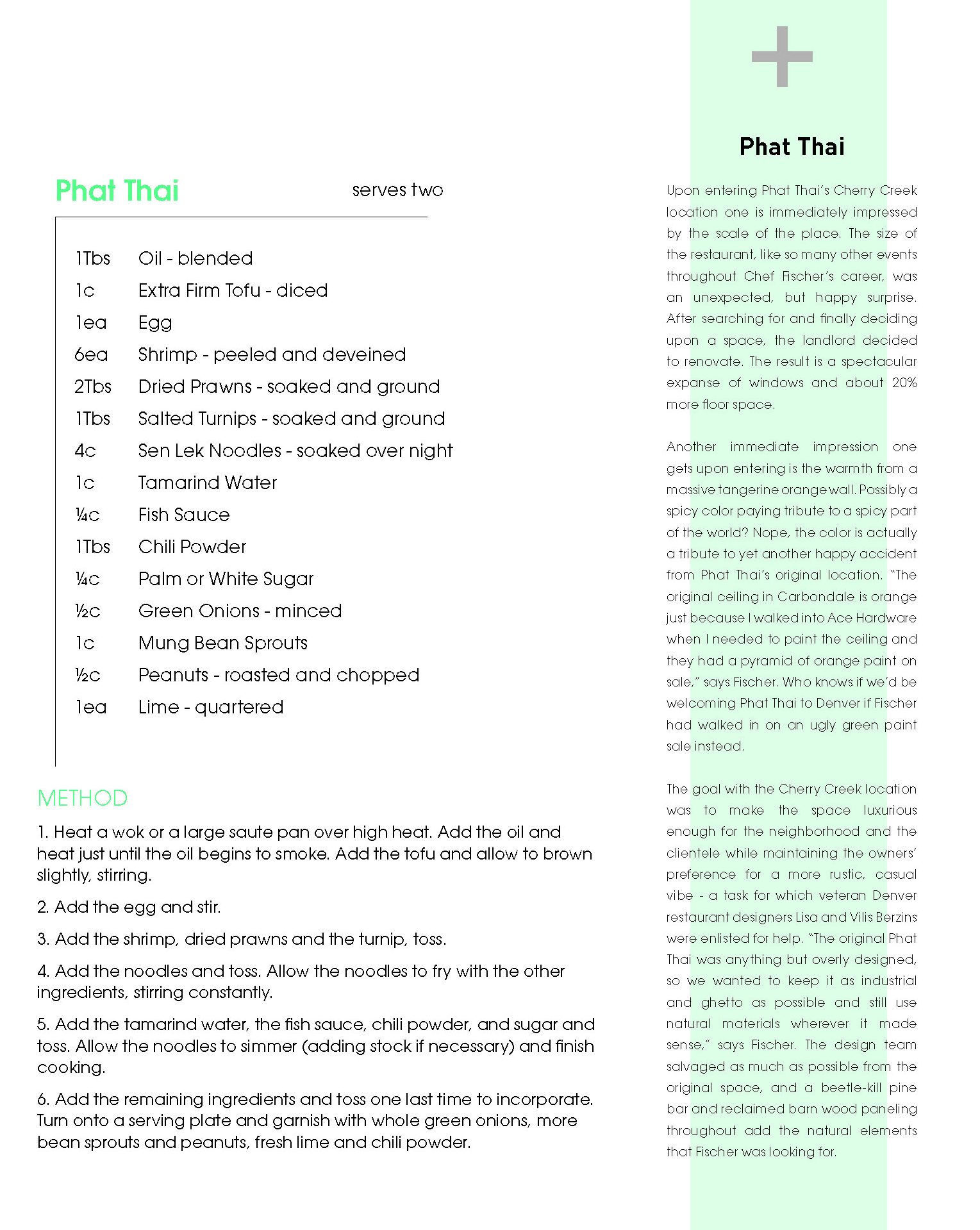