Check out more modern lighting on our Pinterest board here!

If the word chandelier conjures up images of gleaming concentric rows draped in twinkling droplets of crystal, fear not. The chandelier known to haunt old-world castles, only to crash down on unsuspecting victims, is dead.

But a new chandelier is alive and well. Today’s chandelier is less ornate, less glaring, less troubled. It is not an ordered layer cake of lights but rather a study in suspension. It can contain many parts— or simply one. Some might say that the term chandelier no longer applies, and there is some truth to that. Whatever the word, we’re talking about great hanging light forms.

Today’s chandelier takes advantage of LED technology and its benefits— less heat, less glare, and less space. Sometimes, lights disappear into the very fabric of the chandelier. And suspension is key. Today’s chandelier hovers in space. Some double as mobiles. Others feature parts that drape or melt. Whatever the incarnation—edgy, organic, cosmic—today’s chandelier has one rule: It’s got to hang.

Ever since Plumen developed its distinctive lightbulb nearly a decade ago, the design community has stepped up to figure out new ways to showcase the bulbs. The latest effort comes from designer Luke Deering, tapped by Plumen to be more thoughtful about the future of light. Deering builds on the bespoke model of 3D printing, using materials made of 90 percent recycled plastic—and the shade is completely biodegradable. Like a mesh casing full of honeycomb-inspired hexagons, the Hive shade focuses the beam downward but still allows glimmers of light—and bulb—to shine through. 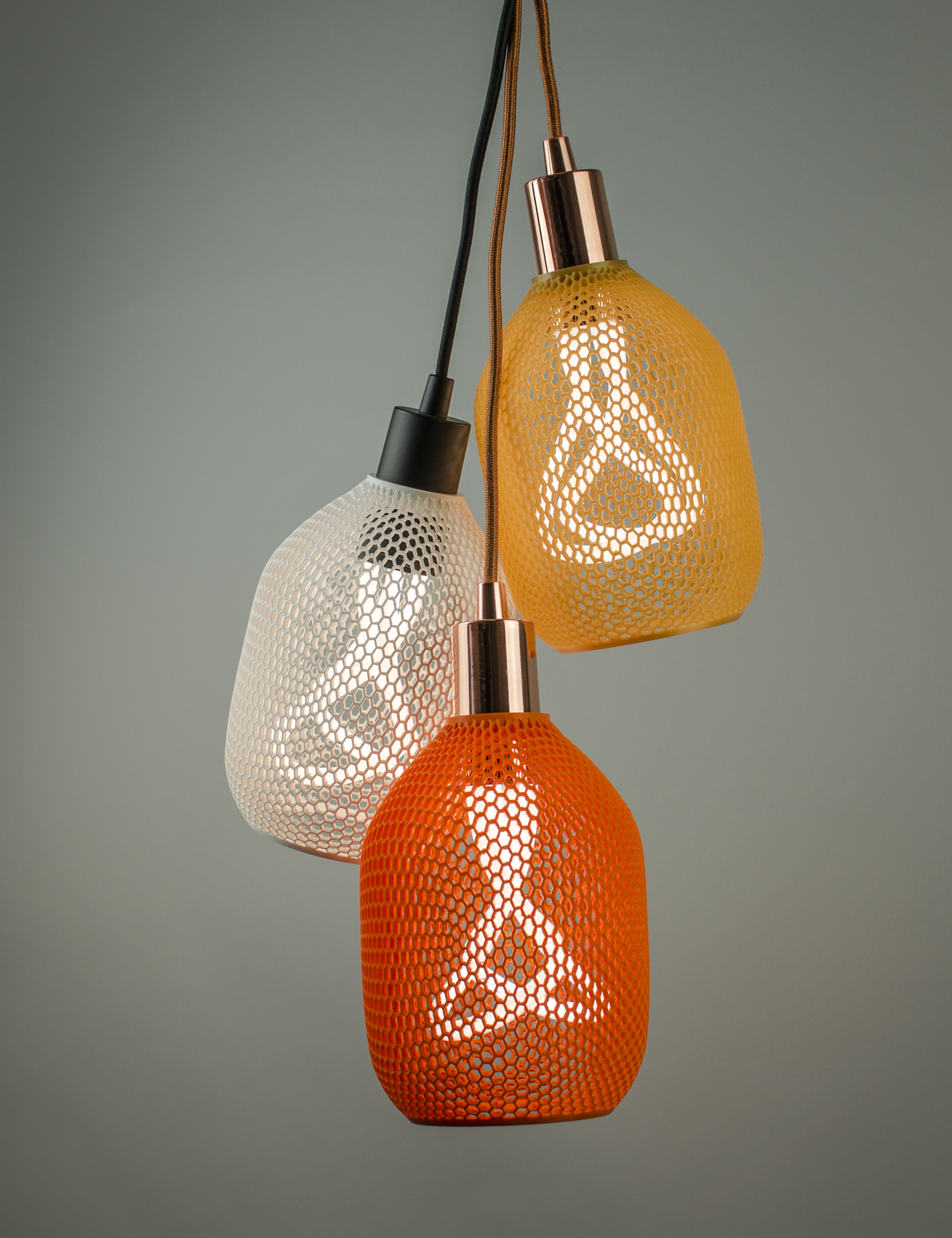 Winner of Best in Show at this year’s NYCxDESIGN Awards, Chime continues Stickbulb’s focus on reclaimed materials. The 10-foot tall undulating swirl of tubular lights is built of redwood taken from the demolished water tower atop 32 Court Street, the address of Brooklyn’s first skyscraper. 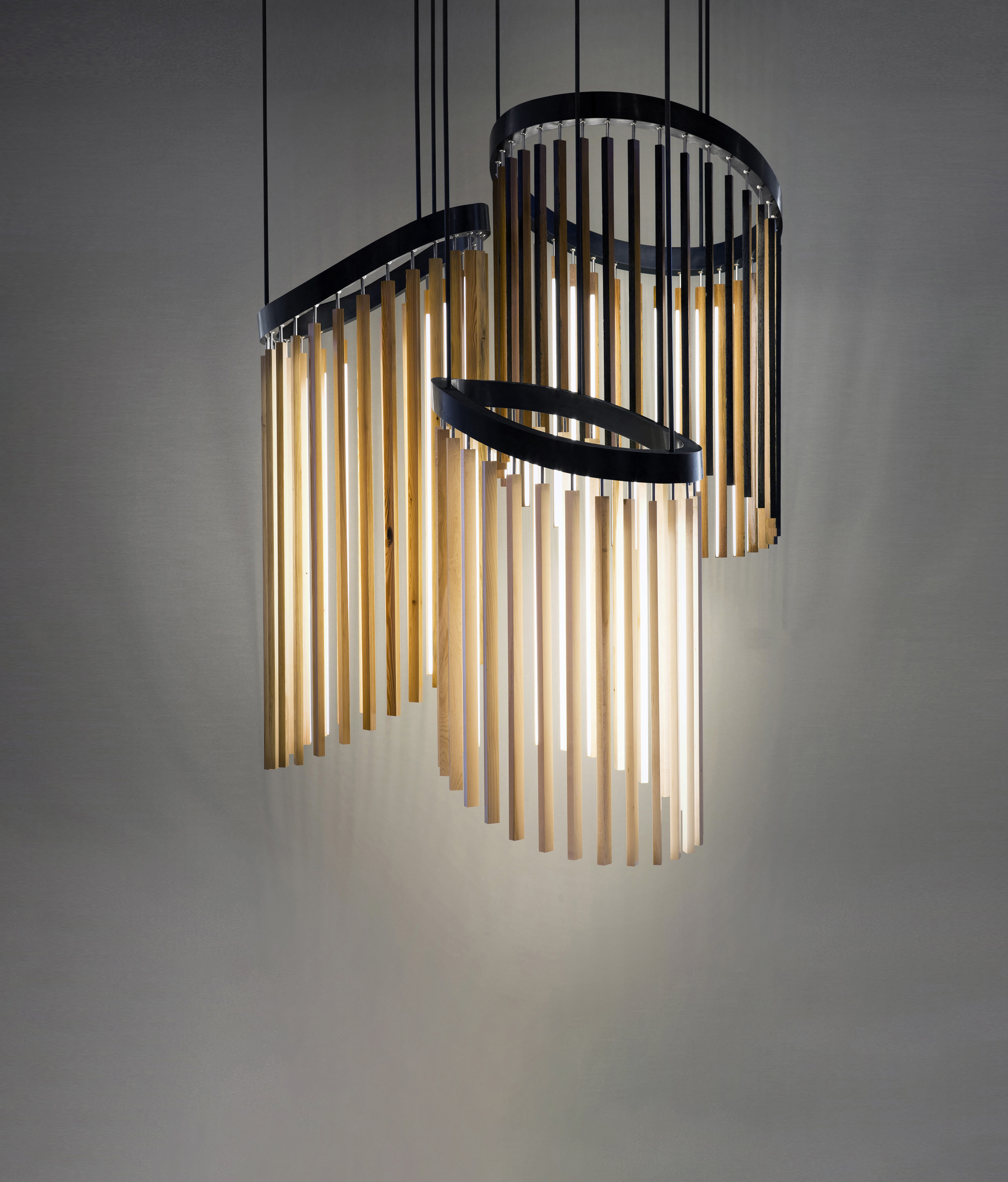 More light sculpture than chandelier, 87 takes full advantage of technology. The draping twists of light and glass are created by using soda water “to trap air in a super-heated glass matrix.” The cooling process converts the entrapped air into opalescent microfilaments, which getilluminated by a low-voltage xenon or LED light source introduced at the end of the loop. 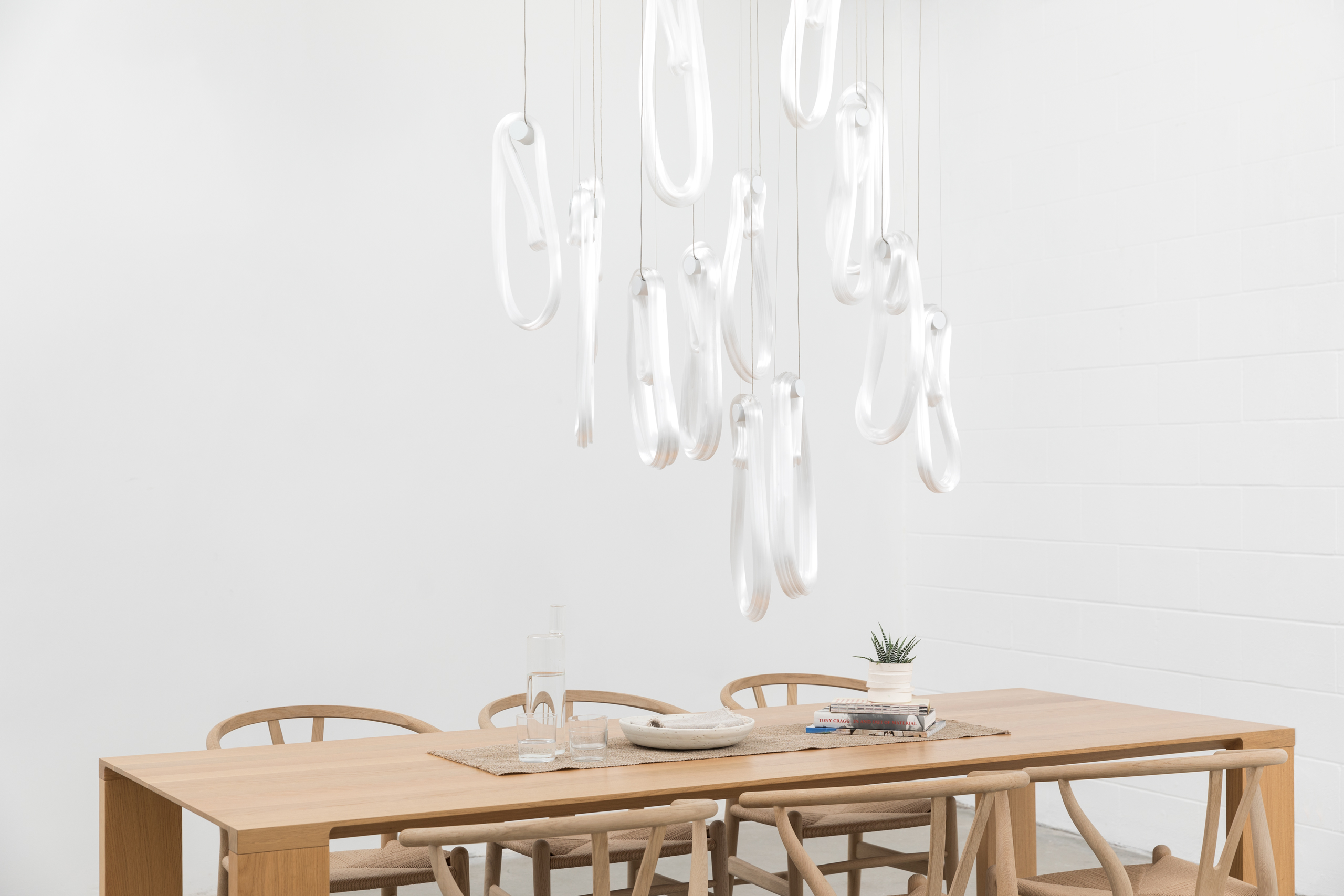 Super-planetary and enchantingly mathematical, Copernico was ahead of its time. Released in 2010 by Artemide, arguably one of the three Italian lighting greats, Copernico integrates a circuit of 384 tiny LEDs. These nestle inside nine concentric mobile ellipses created from one aluminum plate. The ellipses operate independently on two different axes, so Copernico can change shape. 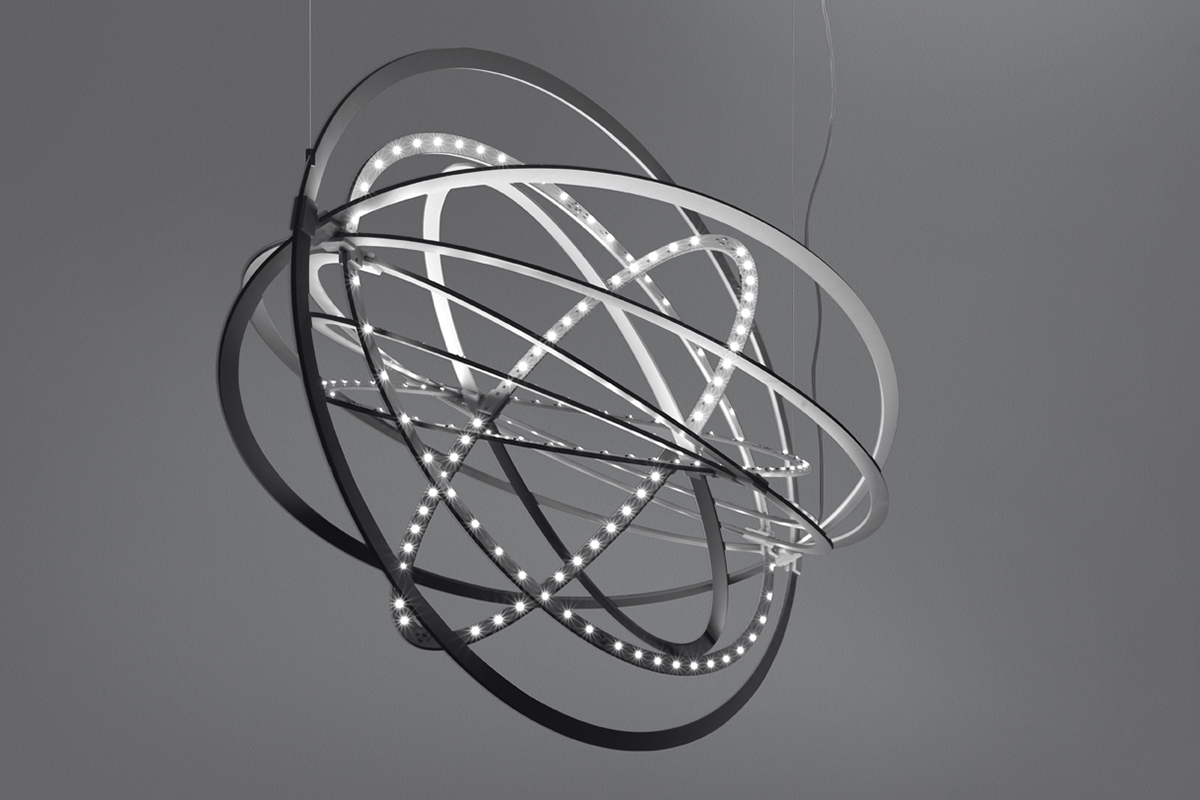 Self-taught British designer Tom Dixon and women-led Swedish design studio FRONT created the Melt series to highlight organic imperfection. The metallic blobs are so imperfect, in fact, that they seem to be alive and in the process of morphing. Now available in a Mega Pendant System with 11 warped orbs of varying sizes, Melt is luminous on a grand scale. 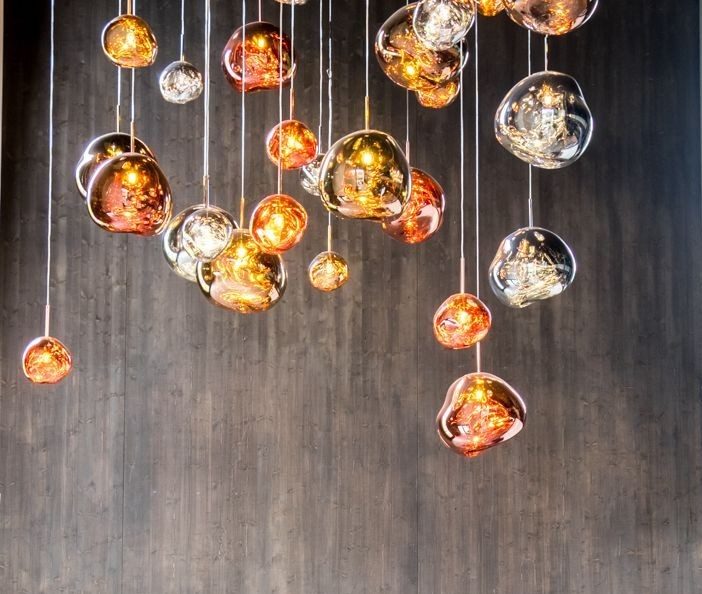 Designed by Tina Leung, Buckle is a perfectly sliced ribbon of stainless steel. An LED source bounces light from internal surfaces, producing a unique ambient illumination. “The feeling it creates has often been linked to light bouncing off water,” according to Innermost. 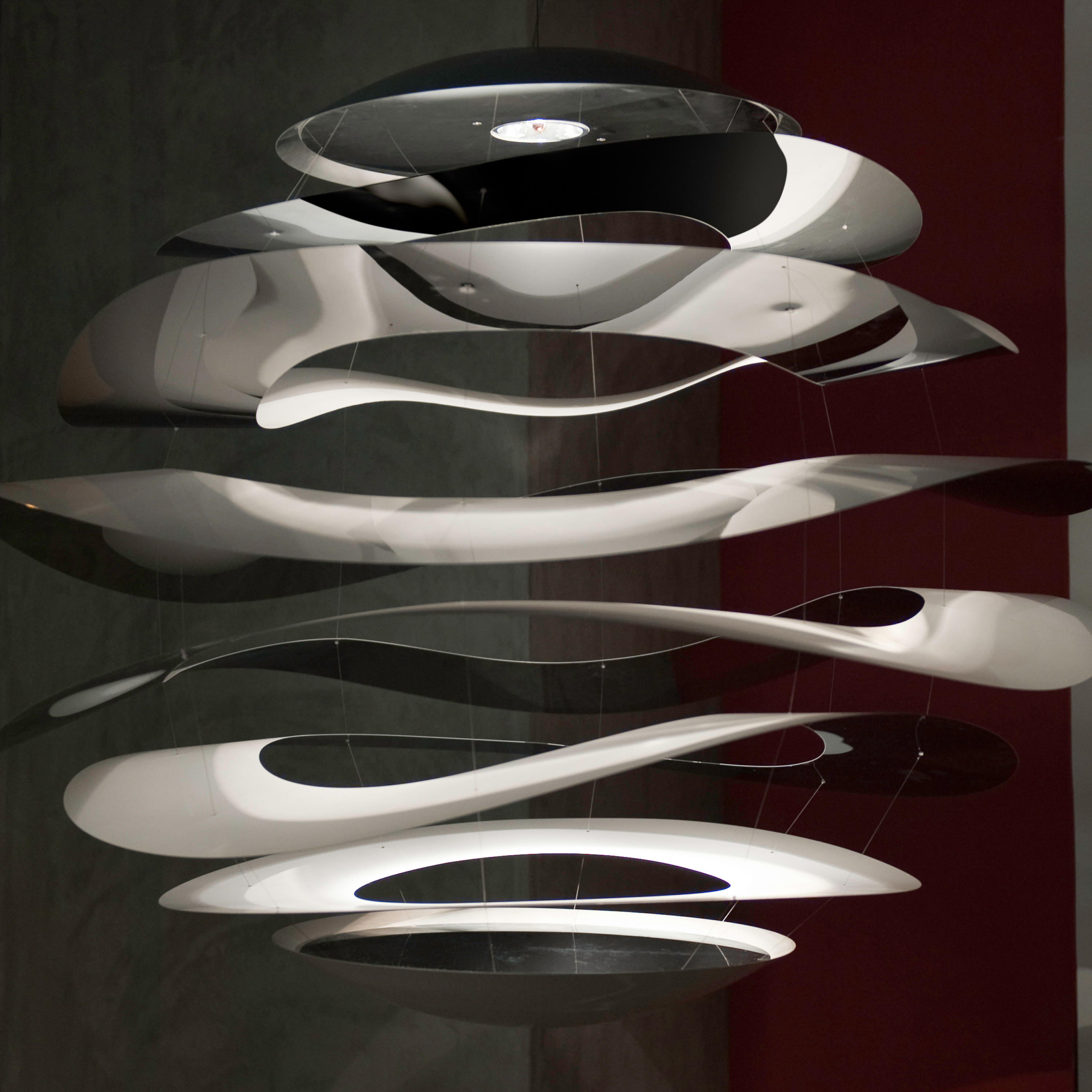 A contemporary version of the midcentury atomic chandelier, Cosma Chandelier features smooth white globes, five up and five down, radiating from a central disc resembling a flying saucer. It also calls to mind high school chemistry, since the glass balls look like molecules. 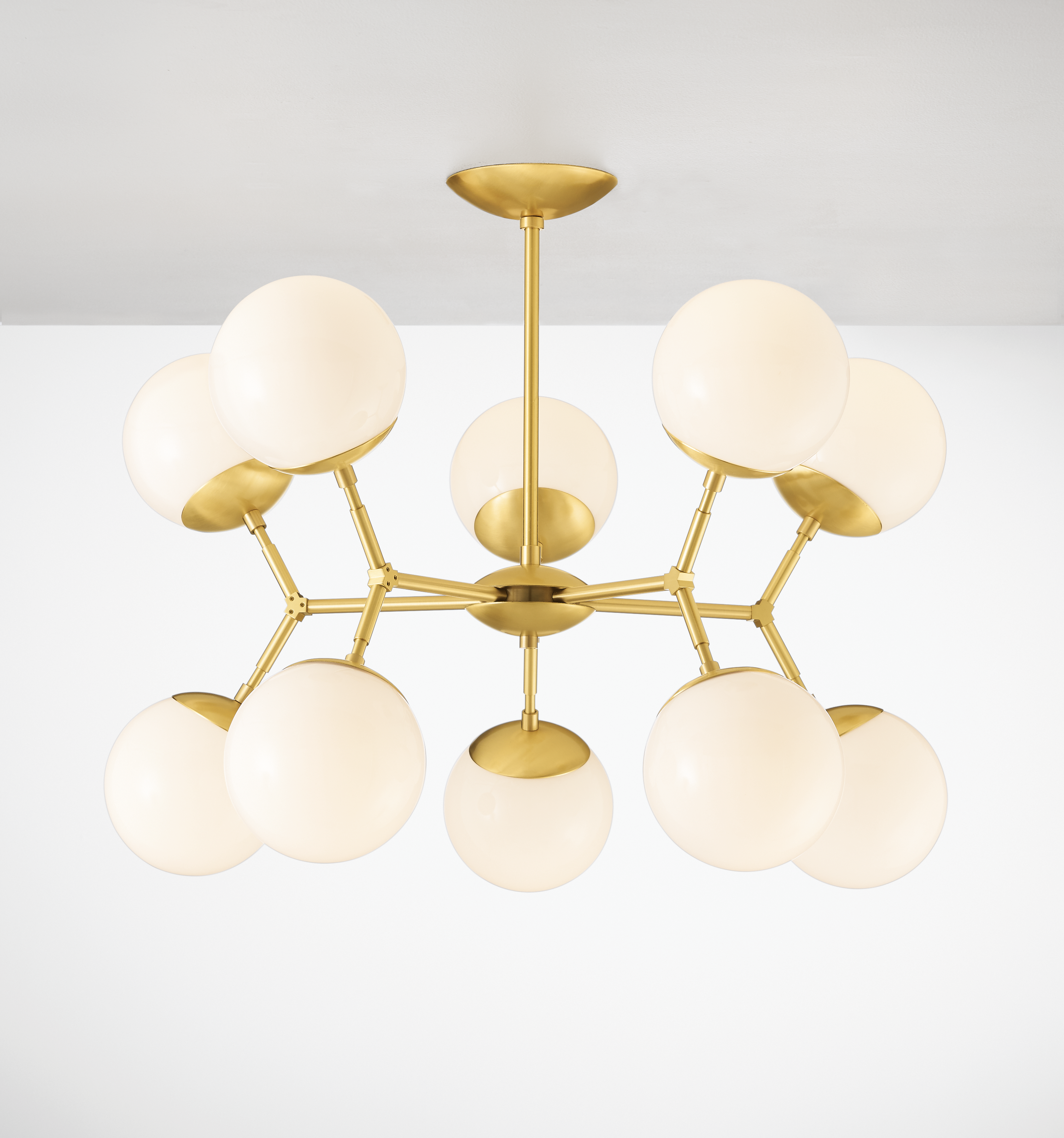 Like a fireworks flower bursting in incandescence, Cannonball Suspension captures the dynamics of an explosion. Rods of varying length emanate from a central cannonball. Some of the rods end in pinpricks of light. This nod to the 20th-century atomic lamp is from Delightfull, a Portuguese company known for outlandish design. 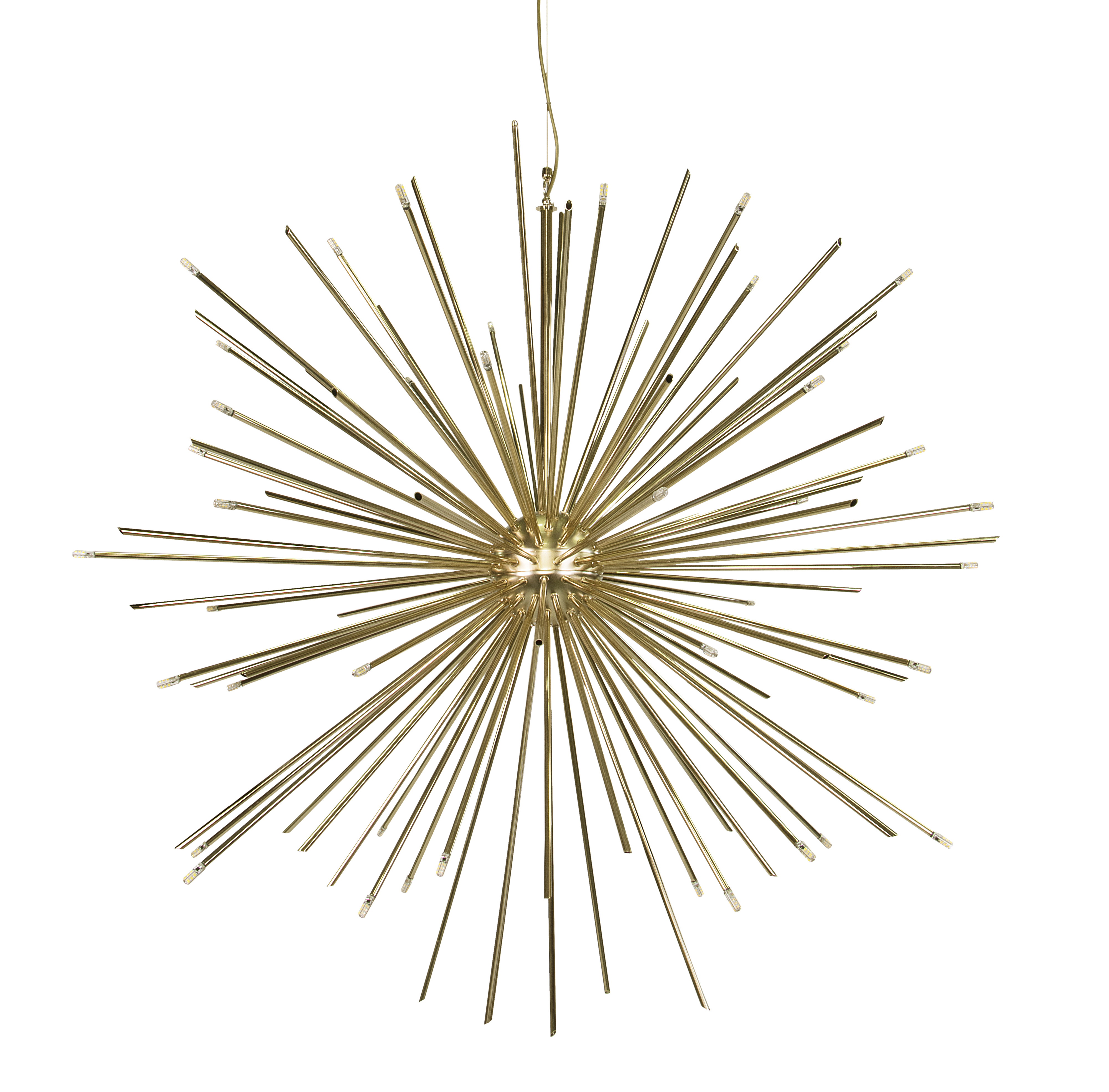 With Boa, bulbs hide inside tubes of chainmail. The chainmail, which comes in brass, nickel, steel, and hematite, can also be gathered on top of the bulbs. Either way, it looks as if a snake is eating light. The draped chainmail makes it seem like the boa is opening its mouth to devour the bulb. Once ingested, the light sits inside the snake’s body. The use of chainmail gives a wink to the historical origins of chandeliers too. 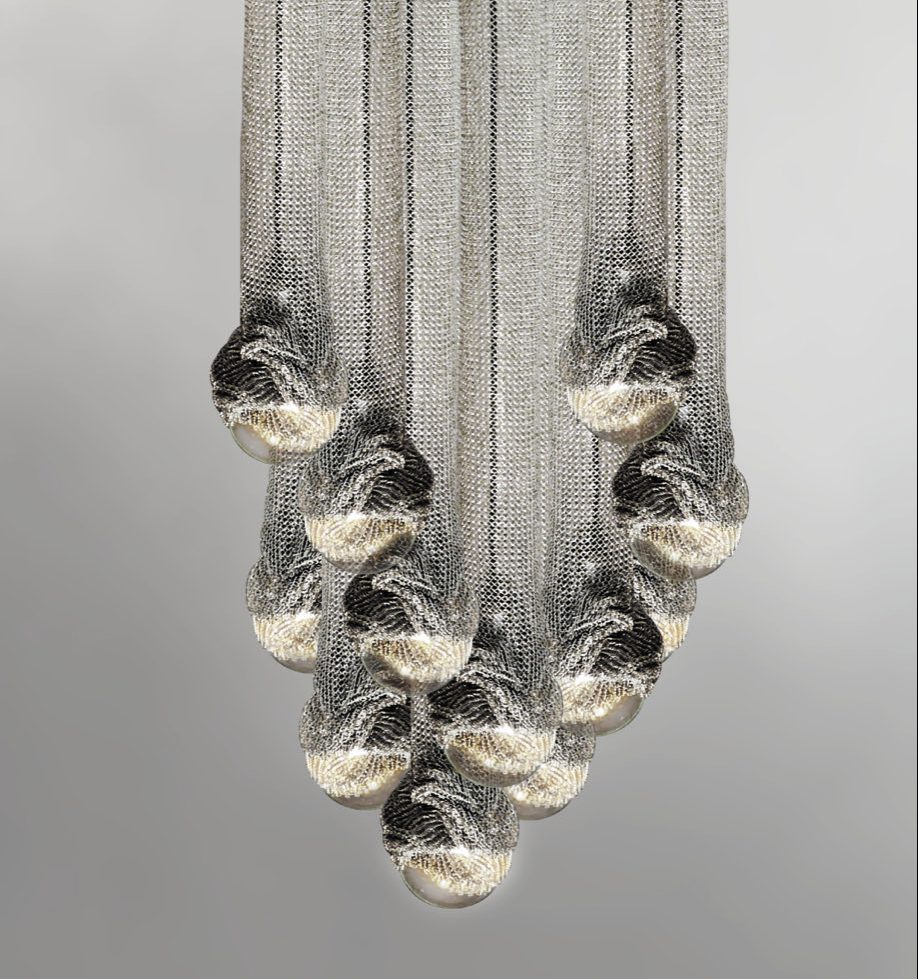 While the original single pendant is an ode to simplicity, with the black base and small light resembling Mount Fuji, Fuji P12 is a lot more complex. The 12 pendants hang from cables attached to a central disc. Hooks in the ceiling allow for nearly endless configurations, and the black cables create their own linear art. Fuji P12 is less majestic and a lot more arachnid-esque. 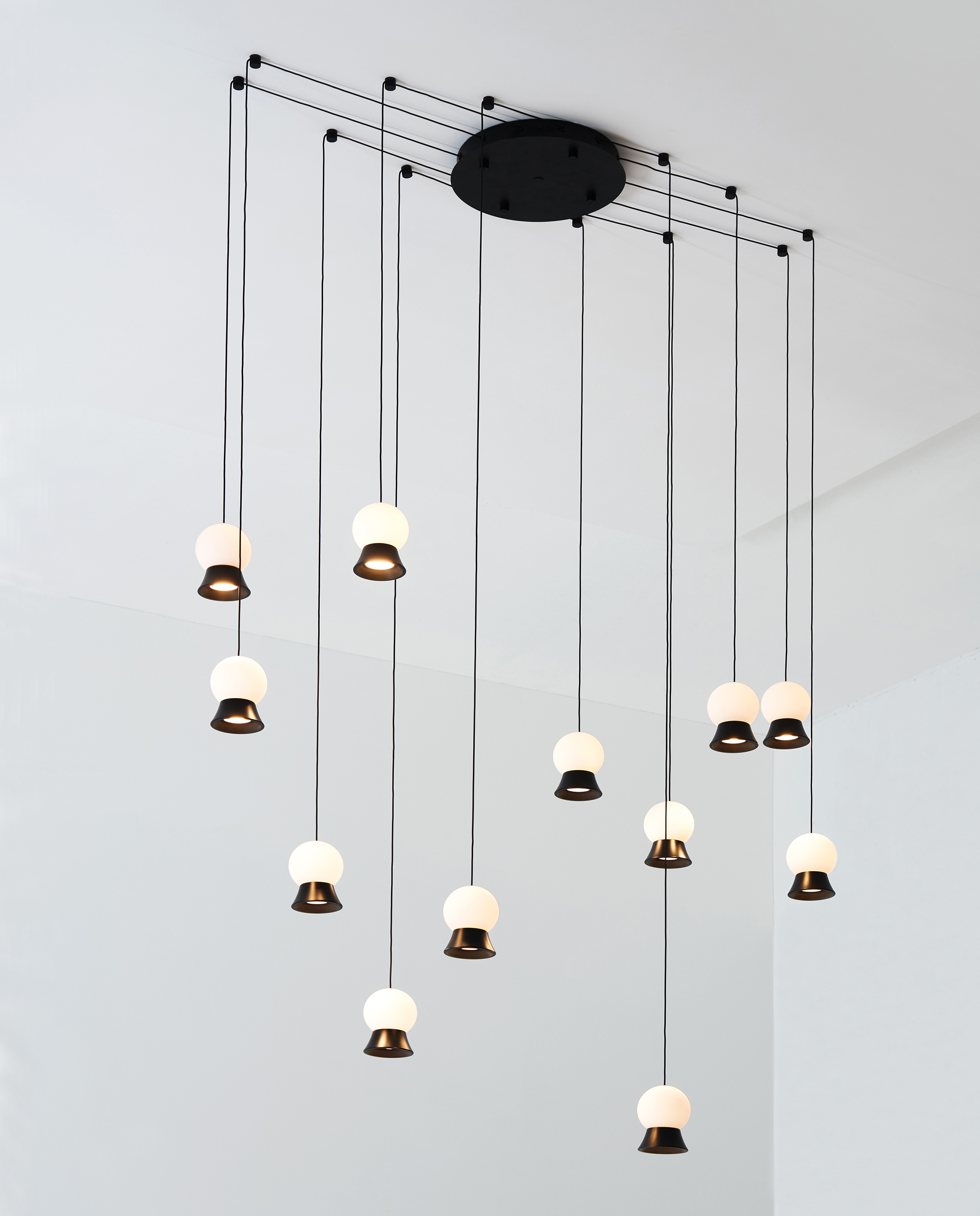 It’s no surprise that Raimond comesfrom Moooi, the daring Dutch furniture and lighting company known for its playful aesthetic. A tribute to Buckminster Fuller and his geodesic dome, Raimond is a mathematical,spherical grid punctuated by tiny LED lights. The result is quite like looking into a starry night. Raimond is named for its creator, Raimond Puts, a mechanical engineer and selftaught designer. 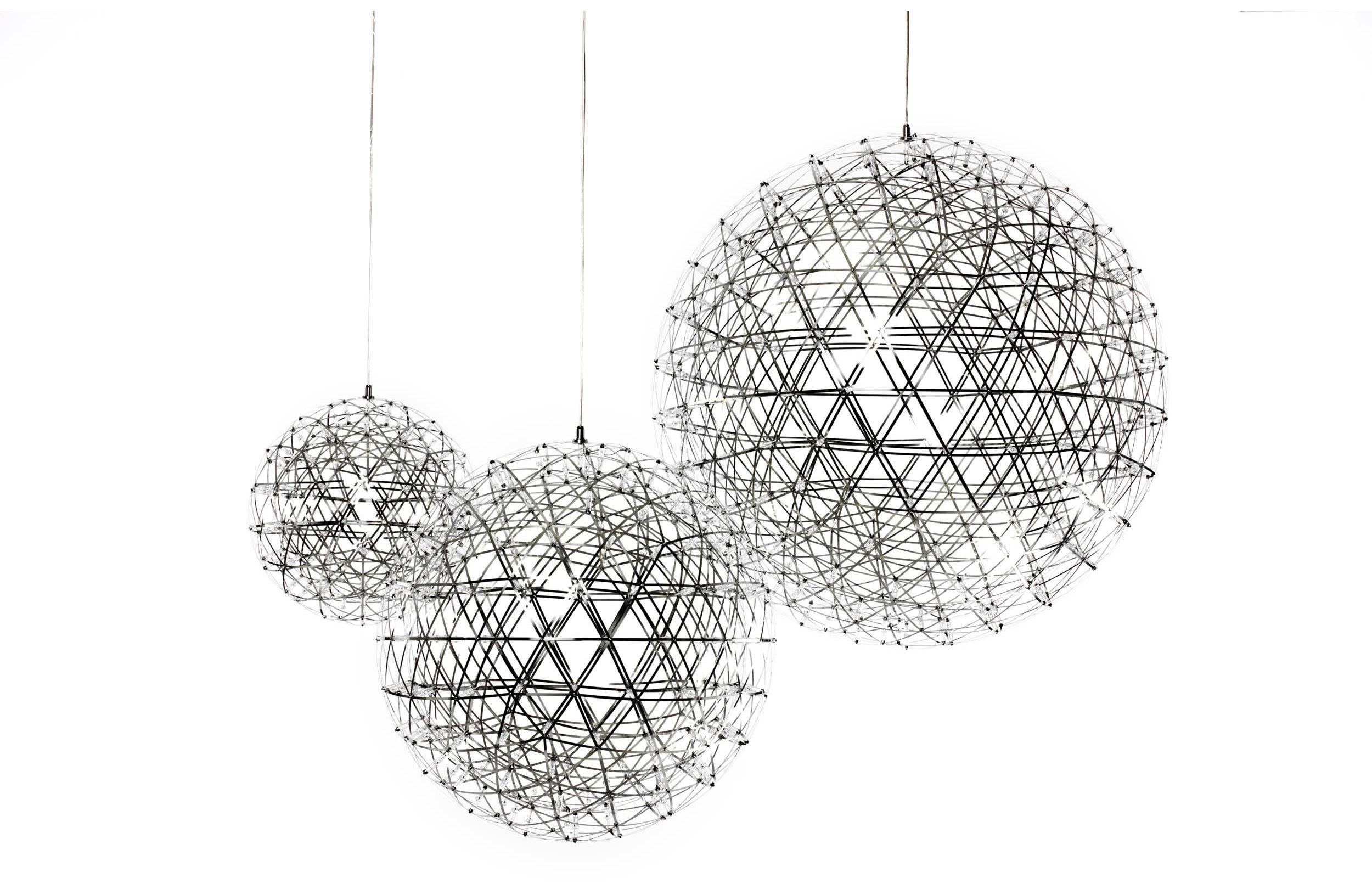 With their glass tips, the rods in Rousseau Grande resemble magician’s wands. This articulating chandelier doubles as a mobile, which only adds to its magical quality. Simple and organic, Rousseau Grande also recalls a pile of sticks. 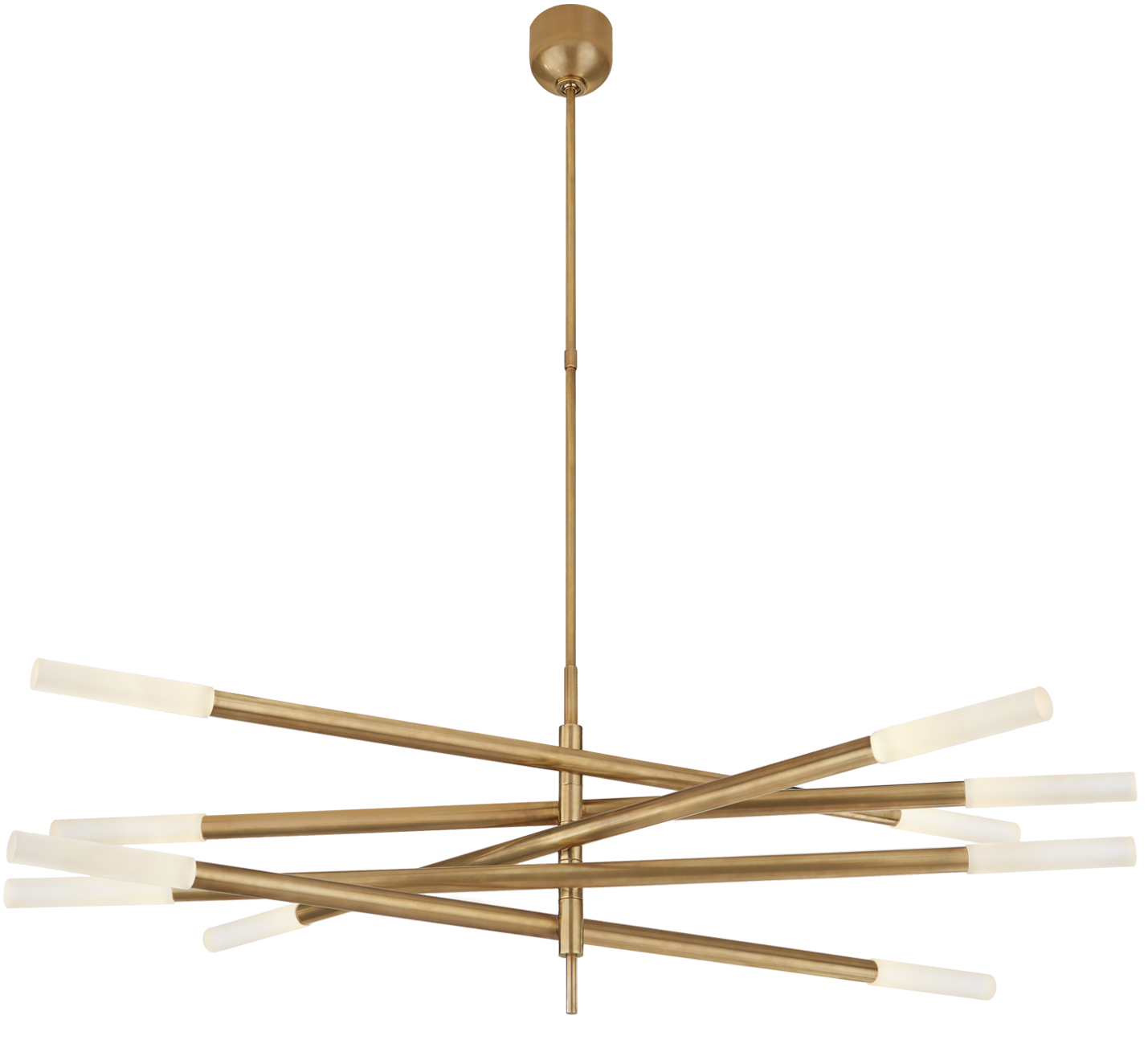 Sleek and minimalistic, Tubular Light comes in multiple incarnations, but each features the simple tube. The geometric designvocabulary lets the materials—burnished brass, steel suspension cables, and red silk-covered braided cords—speak for themselves. For Tubular, less is more. 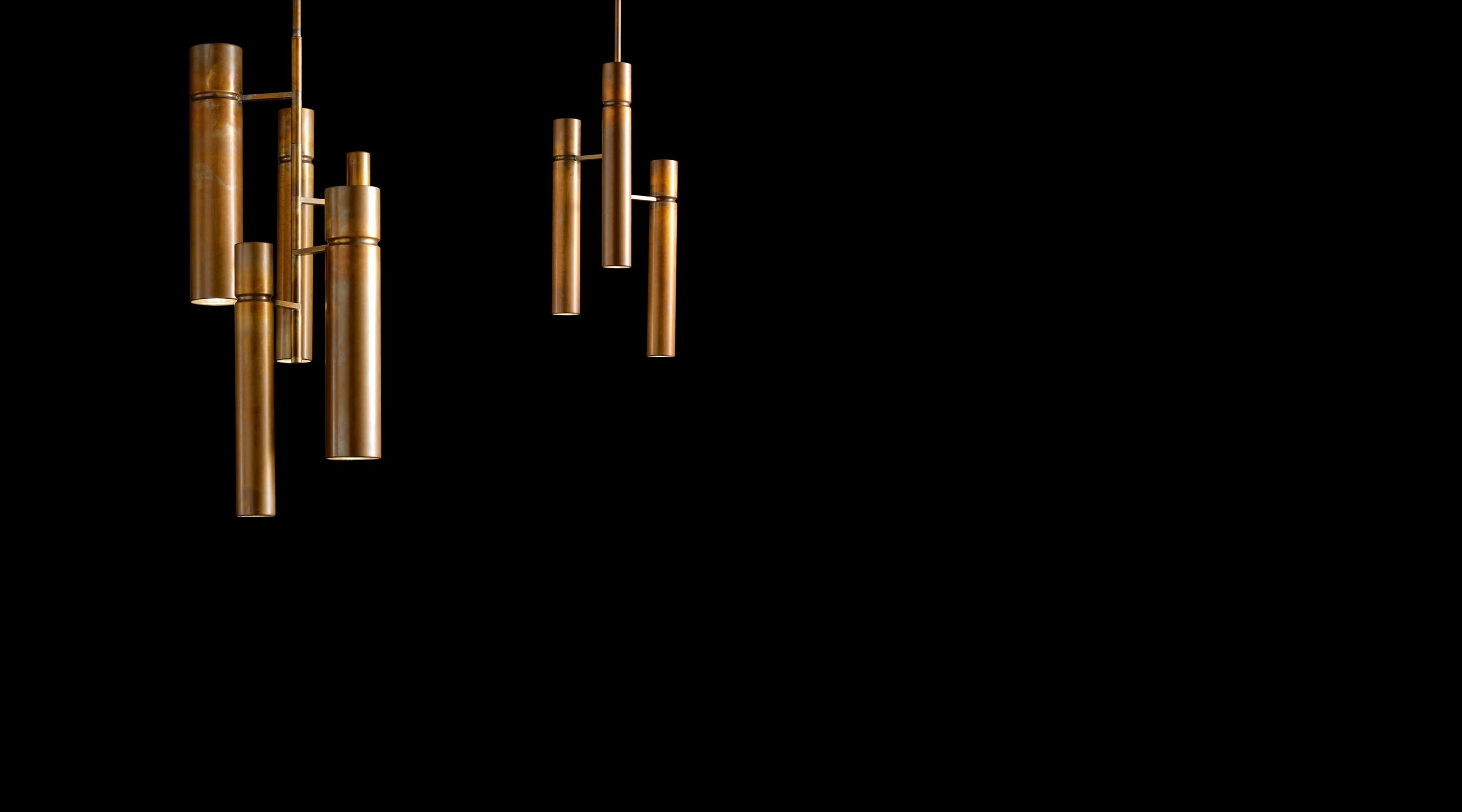 Brooklyn-based Roll & Hill is all about American craftsmanship. Every piece the company produces is constructed on demand, allowing for true customization. Astral Agnes relies on “symmetrical forms that channel galactic phenomena and space travel.” The LED chandelier has the flavor of a Stars Wars lightsaber, especially in black. In polished nickel and brushed brass, Astral Agnes is more like avant-garde jewelry. 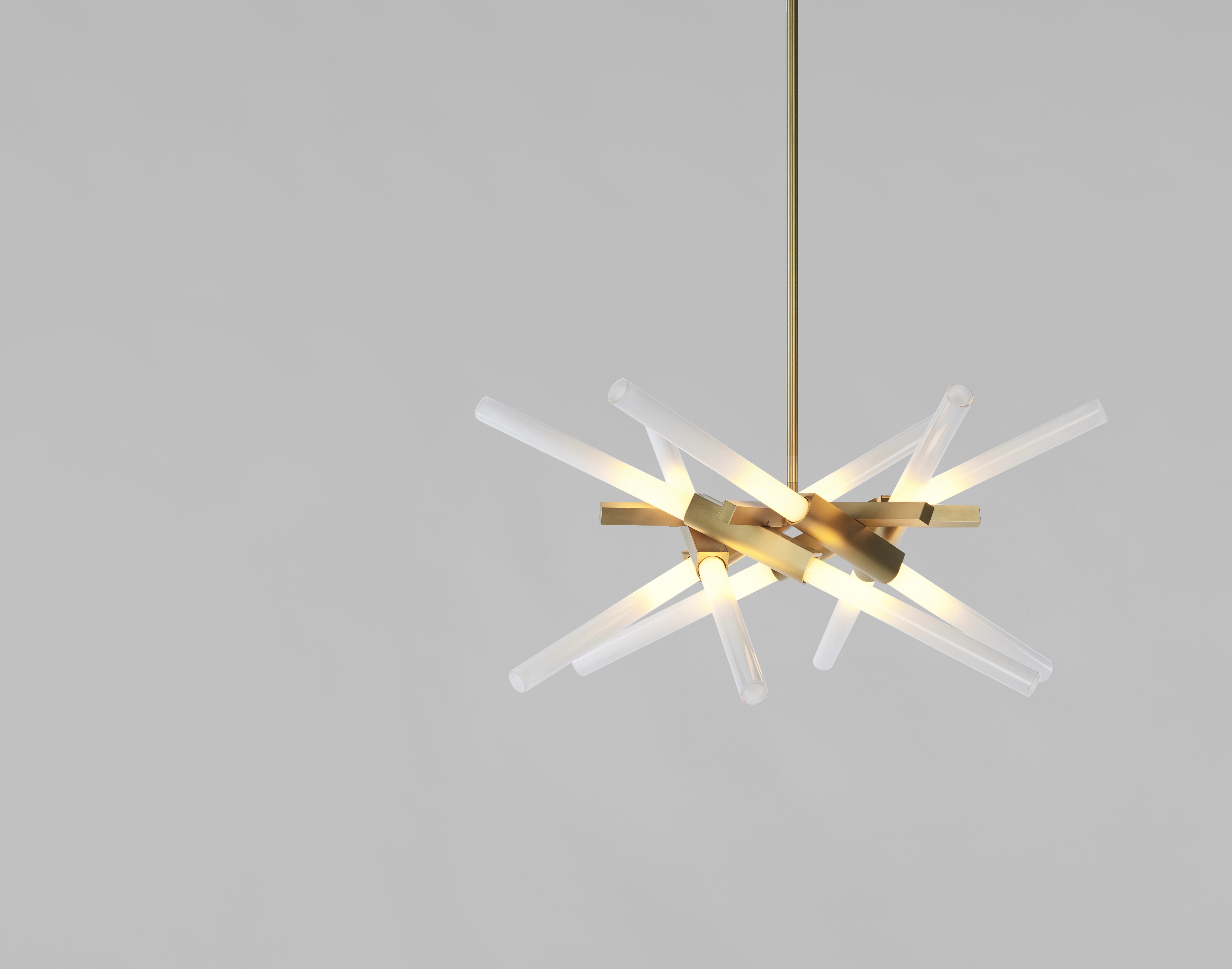 One of a new breed of acoustic lighting, Trypta highlights the design power of the trio. Its three sound-absorbing panels, available in different sizes, attach to a central cylindrical aluminum frame fitted with two LED sources that provide direct and diffused light. It looks like an abstract bird in flight. 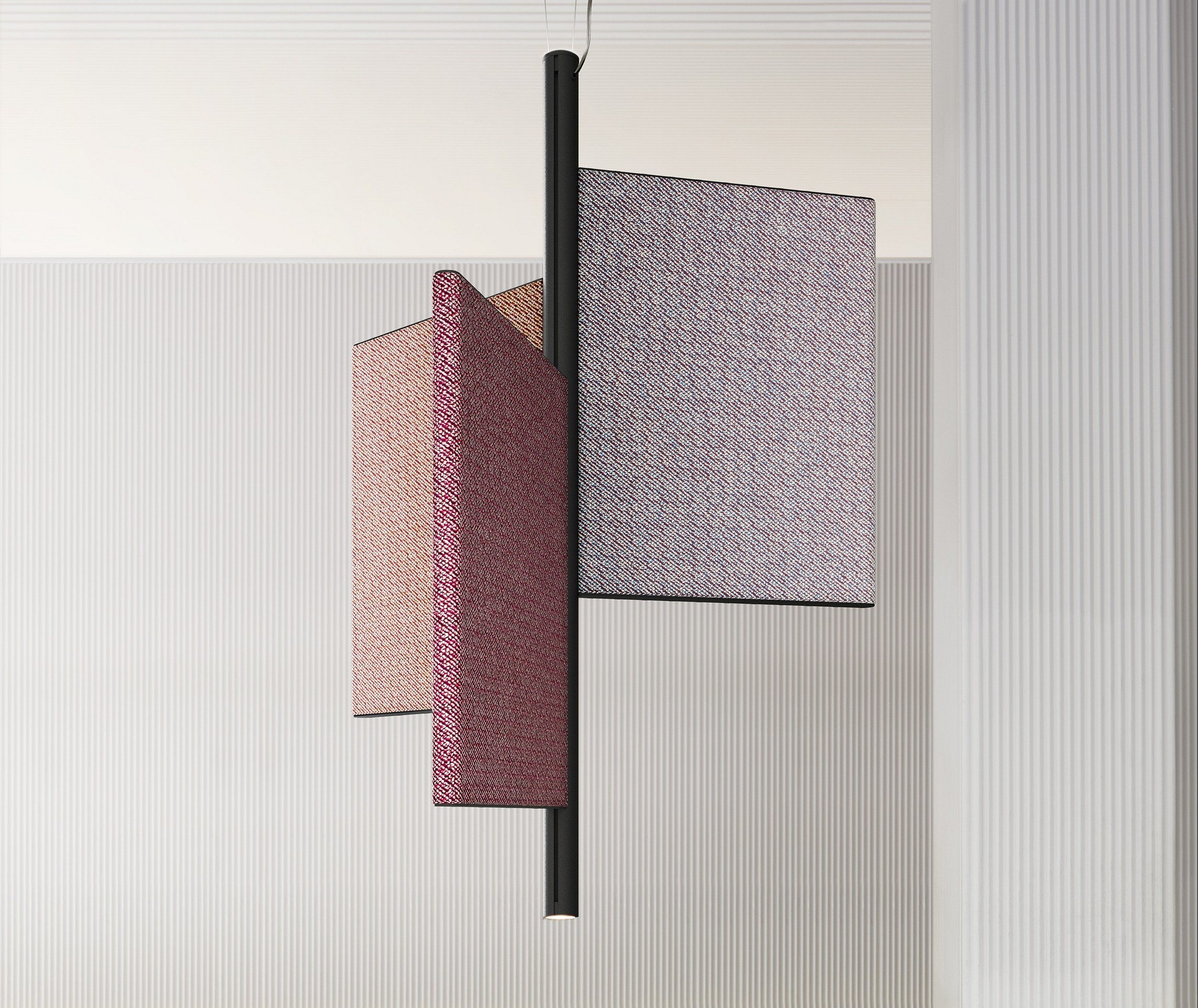