The Mountain Is Why We Are Here

What does the antithesis of resort mountain architecture look like? MacKay-Lyons Sweetapple Architects designs a neighborhood on Powder Mountain favoring community and sustainability over mountain kitsch.

When the co-founders of the Summit Series acquired the ski resort Powder Mountain in Eden, Utah as a home base for their speaker program and 25,000+ person global community comprised of “today’s brightest creators,” the design of their first master-planned development became a seminal moment in translating Summit’s brand into built form.  Jeff Rosenthal, co-founder of Summit, explains; “[We came up with the concept] ‘heritage modernism’—how do we build things that are inspiring, modern and warm but livable, and most importantly, subservient to the land? We are conservationists.  The mountain is why we are here—to look out.  We aren’t interested in expressing wealth, we are interested in expressing a real understanding of place while utilizing what architecture can do; provide a physical home that will yield the community we [the Summit community] are passionate about.”

After creating mood boards, holding charrettes, and tapping their vast creative community for architecture firms demonstrating community building, climate responsiveness, and land stewardship, MacKay-Lyons Sweetapple Architects quickly rose to the top of the list.  With a prolific portfolio including village-making projects such as Shobac, a series of vacation cottages on MacKay-Lyons’ farm in Nova Scotia, the firm’s work immediately resonated with Summit’s stakeholders.  “When we met Brian [MacKay-Lyons] and understood his design process, it seemed the firm’s work was exactly what we were talking about,” explains Rosenthal.

Based in Halifax, Nova Scotia and, as of 2018, Denver, Colorado, MacKay-Lyons Sweetapple Architects (named for its co-founders Brian MacKay-Lyons and Talbot Sweetapple,) first garnered fame for their quiet yet powerful home designs perched along the coast of Nova Scotia.  Over the past 30+ years, the firm has built an international reputation for creating cultural, academic, and residential projects that draw inspiration from regional building practices, material culture, and local climate constraints.  MacKay-Lyons Sweetapple Architects’ buildings are easily recognizable given their consistent reinterpretation of local vernacular forms into concise, solid and void buildings composed in response to their immediate landscape, cultural context, and climate. 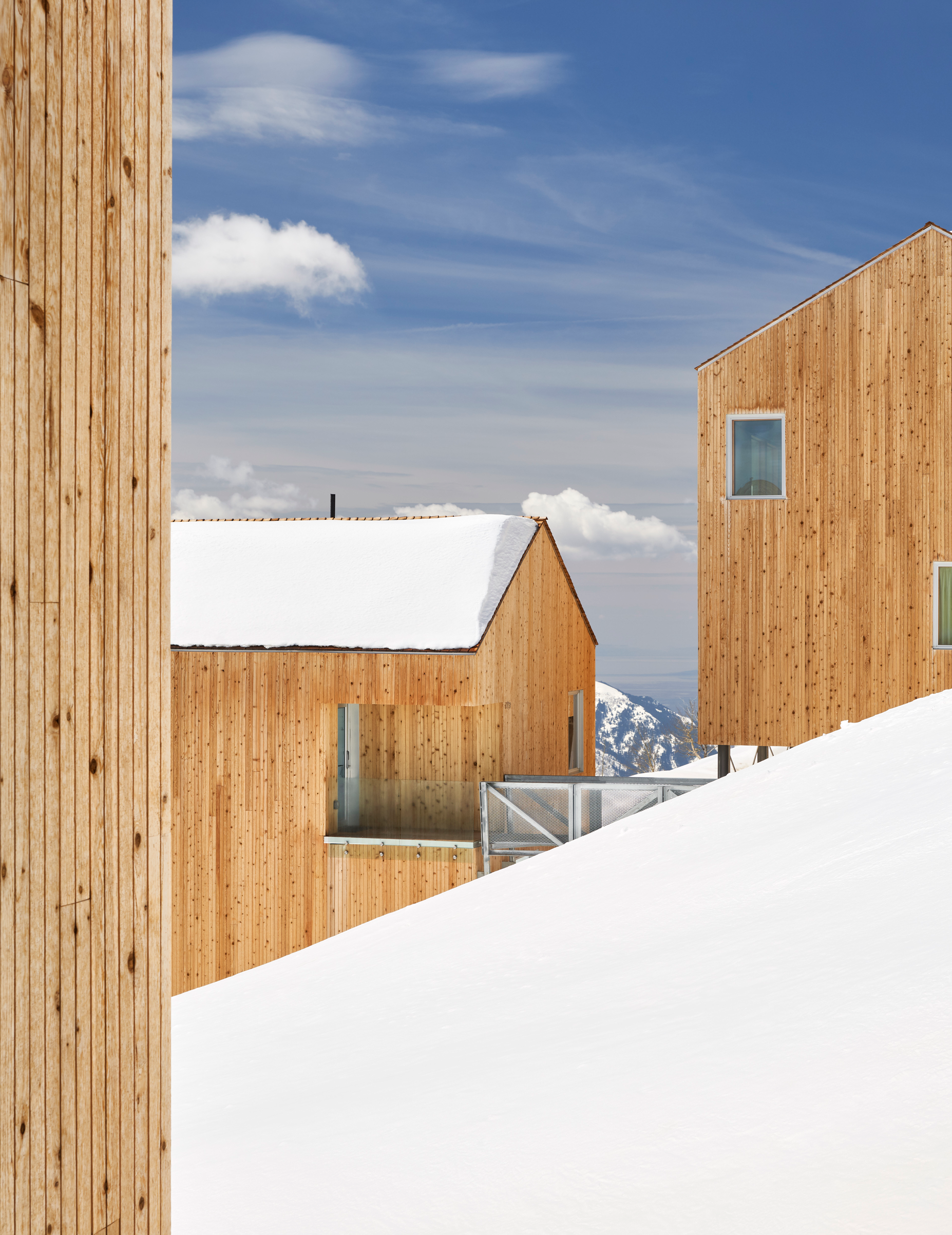 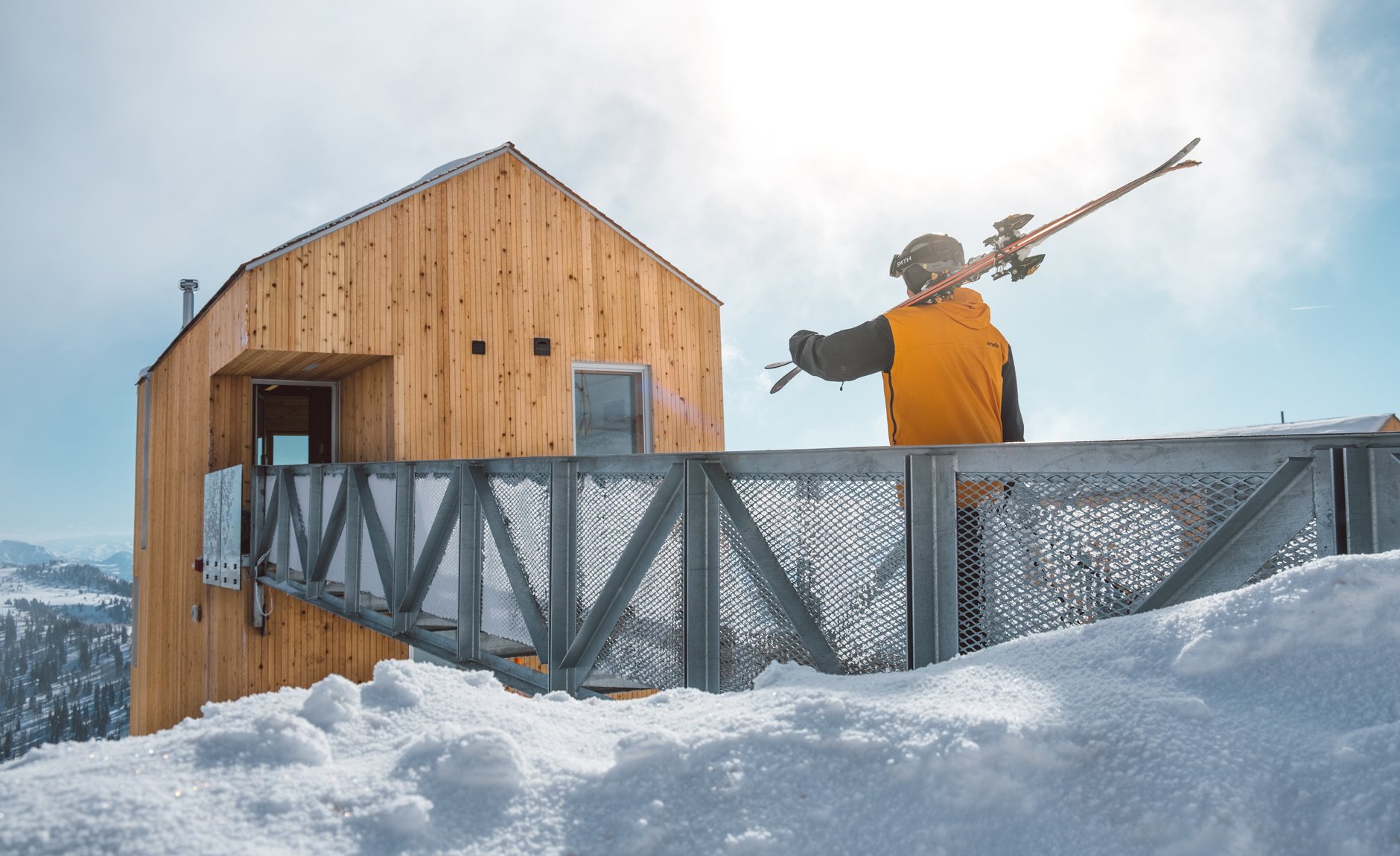 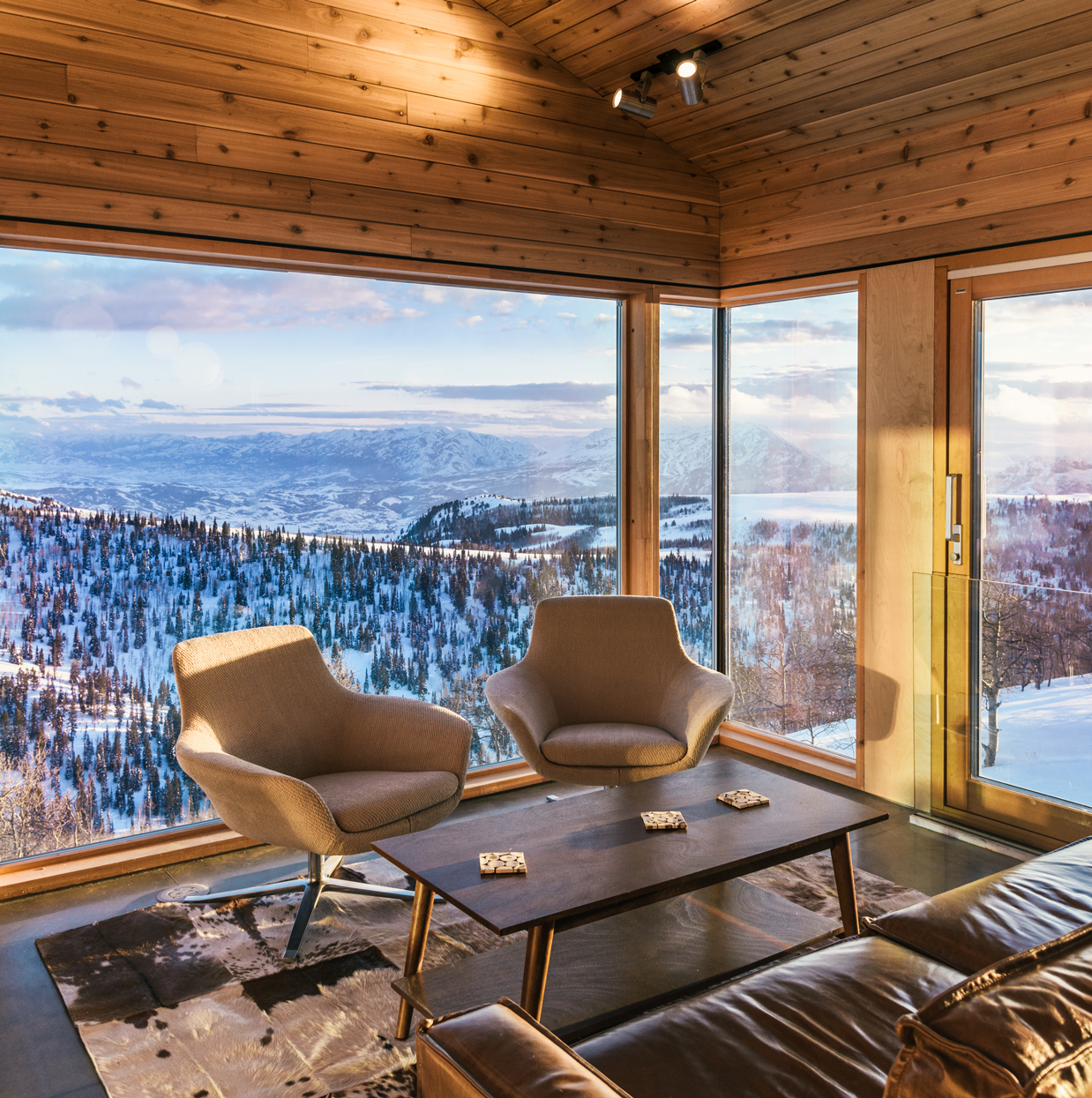 This regional and climate-specific design approach, honed along Canada’s harsh-yet-beautiful rocky coastline, has arguably translated seamlessly to the United States’ Western Mountain region’s dramatic topography and variable weather.  “We [MacKay-Lyons Sweetapple Architects] really enjoy trying to understand a place—its climate, its landscape.  [Working in the Mountain West] the principles are the same but the context is different,” explains MacKay-Lyons.  “It’s good to be clear about [the region’s] different climate drivers; snowfall, topography, solar gain, etc.  What’s the nature of a view in the Mountain West?  We think of our buildings like helmets that you wear; the experience from being inside the building looking out at the world.  Having built on the coast for 40 years, I’ve learned to frame views with a low window head so the ocean looks big because you crop the sky out of the view.  The same happens when you’re on the top of the mountain.  You let the mountains swell and cut out the gratuitous sky.  The hard-learned principles are relevant here.”

“We really enjoy trying to understand a place—its climate, its landscape. Working in the Mountain West, the principles are the same but the context is different.”

MacKay-Lyon’s was able to apply and test these principles in his collaboration with the Summit community.  After an initial site visit and participatory visioning with key stakeholders, the masterplan for “Horizon,” a pre-designed neighborhood consisting of 30 cabins, strategically-placed garages, and a communal lodge for homeowners quickly gained consensus and momentum.   “Frank Lloyd Wright says if you don’t get an idea on the first day on the site, you won’t get one.  I think he’s right about that.  I tell clients we will see the site together, through their eyes, and get an idea very quickly,” shared MacKay-Lyons.  To date, 8 cabins have been built in Phase I, marking the firm’s first built project in the United States.

Perhaps what is most notable about Horizon is its rejection of traditional mountain resort architecture.  In lieu of large, custom homes clad in a pastiche of stone, wood, and antler décor, slender, 1000-2,500 sf cedar cabins, reminiscent of the cedar barns of the Eden Valley below, dance on steel stilts above the snow pack.  There are no long, private drives leading to mansions hidden amongst tree cover.  Instead, a dense neighborhood comprised of four related, semi-custom home models are sited in dialogue with one another.  Connected through a series of bridges, homeowners enter on the second level of the home, above the snowfall and where winds are less likely to damage the large windows that frame the common spaces. The proximity of homes and composition of bridges form courtyards built into the mountainside, promoting visibility and social interactions between neighbors in micro-climate-controlled spaces buffered from high winds.

With plans for up to 500 residences to be built on Powder Mountain, MacKay-Lyons expresses his hope that subsequent development maintains Horizon’s use of economy and connectivity.  “If this mountain can maintain its uniqueness, it’s because it’s not doing the typical mountain resort thing where houses are too expensive and not conceived of as a community.  That’s not their [Summit’s] agenda…A responsible work of architecture elevates the entire scene; we see the world according to the work.  The building is not about itself, but how it becomes part of a community.”  Rosenthal also sees Horizon’s urban design principles as a way to facilitate Summit’s broader vision for a ski resort operating under a new paradigm; “We want to meet our neighbors, to be in each other’s houses–we want people to create their own orbits that we will connect and collide with.  That will be the most special thing about this project.” 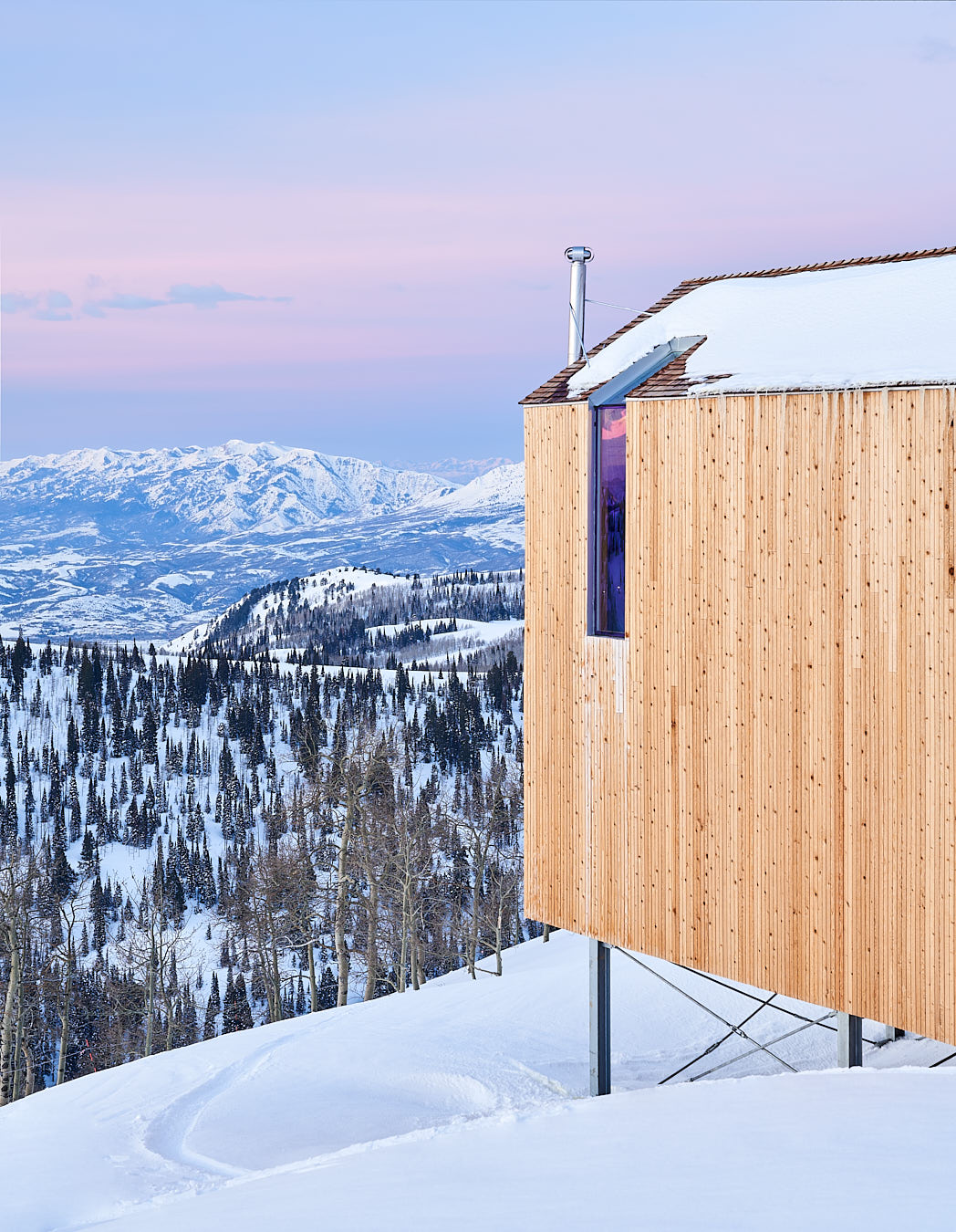