Our Spring 2013 issue featured F9 Productions‘ founders Alex Gore and Lance Cayko and their Doomsday Dwellings. Spurred to action by the increasing rate of natural disasters across the world, these creative individuals conceptualized buildings that could withstand the strongest hurricanes, fires, and earthquakes. Scroll through to read about their architecture firm and see some of their building designs. 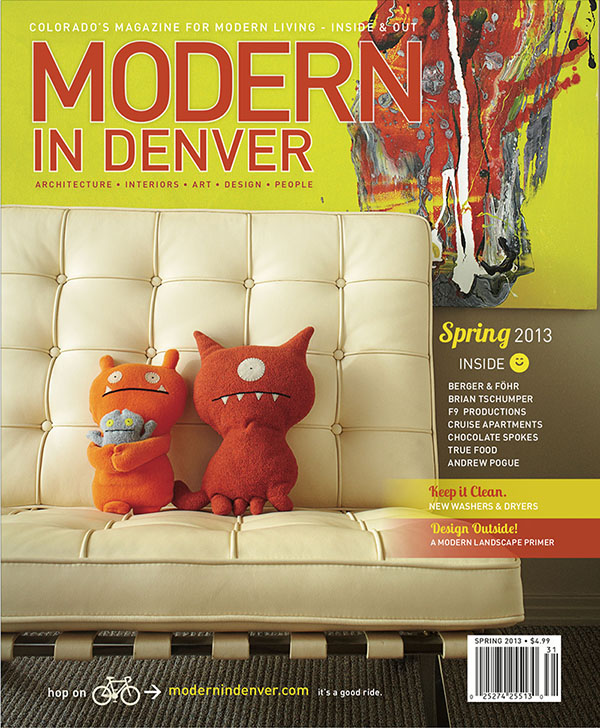 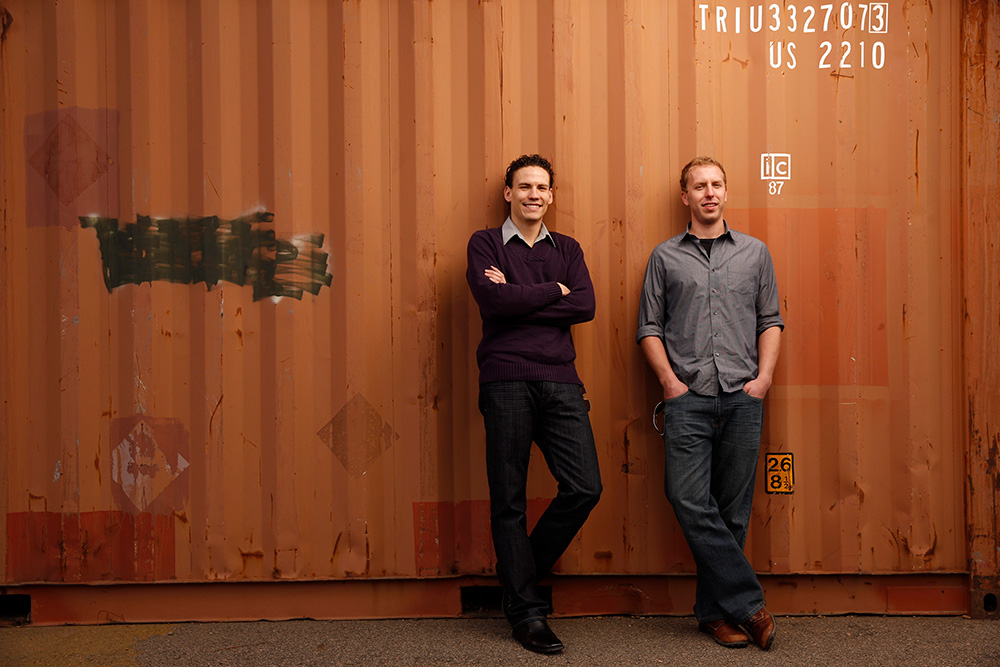 Lance Cayko (left) and Alex Gore met in architecture courses at North Dakota State University. Feeding off each others’ strengths, they developed a method for progressive creativity paired with sober pragmatism. “I love waking up every day, heading to work with my best friend and going on design adventures together,” says Lance. 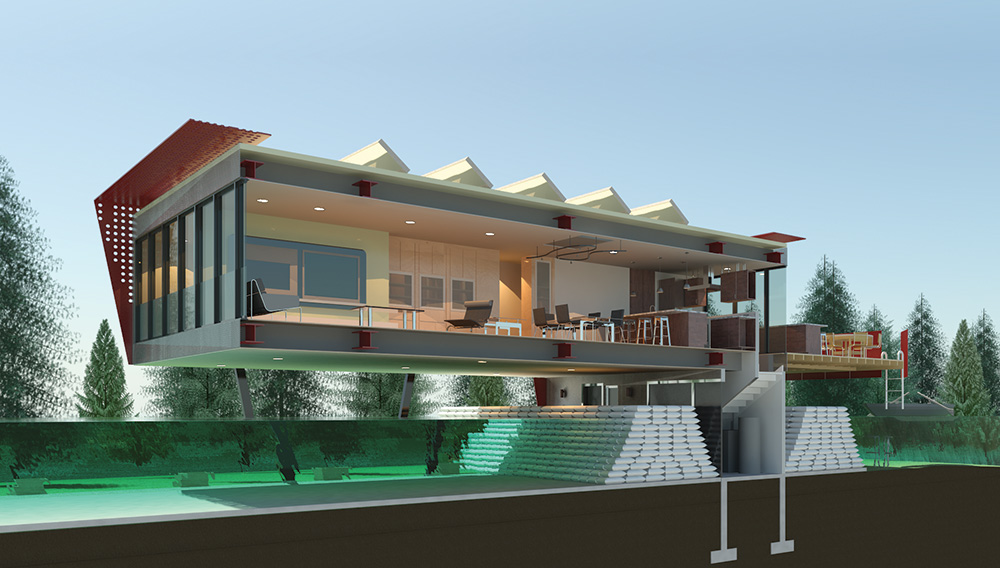 The “Flood House” was the first residential dwelling concept that F9 created to withstand a natural disaster. It rises above the ground while still offering all the comforts of a modern home. It’s a ramped-up version of the home model people living in marshy areas have used for centuries, but with added protective and sustainable features, as well as style. 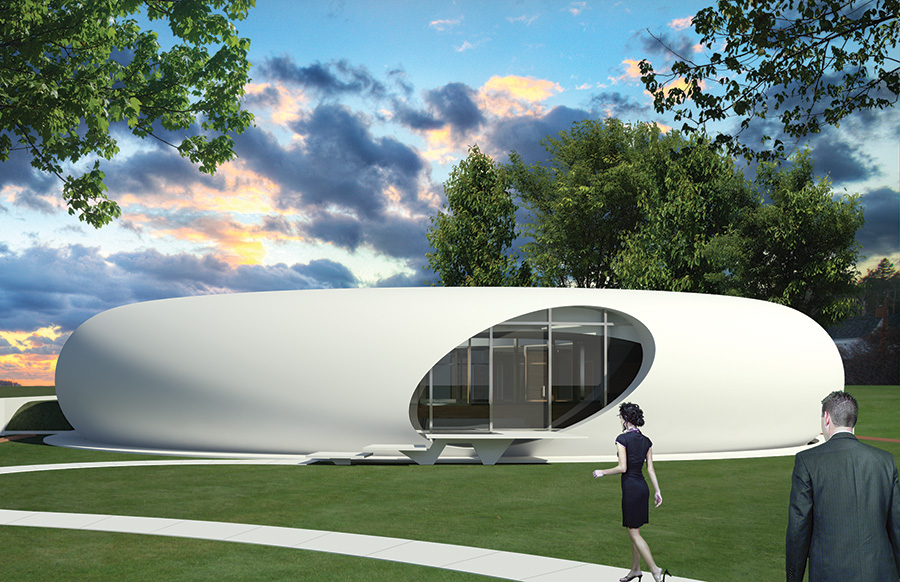 The “Genesis” home takes survival to the ultimate level and makes bomb shelters look like the metal canteens that they are. This hypothetical design imagines a residence with the ability to mechanically sink into the ground. It conceals itself beneath a blast-proof covering, while allowing survivors to still have a post-apocalyptic blast of their own with a swimming pool and tools to rebuild society.

It’s raining. It’s pouring. News reports on every station warn of extreme weather conditions and flash flooding. You flip the channel to watch the last half of “What About Bob?” The water levels rise around your home. You yawn, make a cup of chamomile tea and hum as you observe the rain coming down. You have nothing to fear. You live in a Doomsday Dwelling.

“We’re not fanatics about survival,” says Alex Gore, one half of the F9 Productions team. Lance Cayko, the other half, chimes in, “We just don’t think a safe home has to be a bunker. It can be beautiful.” It can also be the result of rigorous thought, foresight and the understanding that the natural influences of our environment don’t have to be quite so devastating. Hurricane Sandy and the Waldo Canyon Fire can be sobering opportunities to learn from past mistakes. They can inform how we rebuild our lives. For Alex and Lance the future of design is obvious. It’s time to adapt.

It was only a few years ago when the two outstanding students asked themselves a profound question. How would nature grow a skyscraper? During an architecture class at North Dakota State University, these overachievers decided it was time for nature to inform construction on a deeper level. “Nature creates complexity by building on simplicity,” explains Alex. Organic objects make room for maximum light, structural stability and efficiency. They also provide their own food and energy. So their skyscraper did the same thing. It twisted to allow light in every apartment and to gather the prevailing wind for energy use. It transformed fog into water to sustain vegetation. The details piled up, and in the end Alex and Lance won the college’s Highrise Award. “The skyscraper project was the first time we were on the same mental level,” recalls Lance of their mutual efforts.

It has been a long road since Alex and Lance left North Dakota. But not as long as they thought it would be. After individually winning the highest awards their department had to offer, the two graduated and decided that perhaps in a decade they’d reconnect and start a firm. Lance continued working as a contractor, something he’d done since he was old enough to work, and eventually moved to Boulder where he joined Studio H:T. “At Studio H:T they always had one or two ideas they were exploring that weren’t for specific clients,” Lance recalls, and he carried that concept with him. Alex had a similar experience when he moved to New York to work for Daniel Libeskind, who designed the Denver Art Museum. He observed Libeskind’s intensive aim to work outside of the box from early in his career. From this, F9 Productions decided that every year they would do a project, independent of client’s work, that would spark their interest and propel them into the future.

Then floods hit North Dakota, en force. “Ninety thousand people were sandbagged,” says Alex, who responded to the situation as he was involved in the National Guard. One day while he was in the endangered area, he stopped for a sandwich when he noticed a small amount of water running under the dike they’d built. Then he peered downhill and realized that what he and the crew were building throughout the night was all that kept a nursing home from being submerged in floodwater. It haunted him months later as he packed up his things to join Lance in Boulder.”

“The flood house was the catalyst,” Lance says regarding the series of homes he and Alex extensively designed last year. To them, it’s still a pleasant surprise that they’re working together so soon at the custom design firm they started in 2009. A slumping economy left droves of talented people like them jobless, but Alex and Lance are nothing if not resourceful. “I’m an optimist and so is Alex at heart,” Lance beams, so they formed F9 as a precaution. “We needed to do something to survive and stay relevant within the industry during the recession,” Alex says, and so the two of them began designing remodel projects throughout Colorado. Remodels turned into complete building concepts, and with their combined experience, F9 became a fast-growing, reputable firm and their full time endeavor. Few designers have the hands-on construction background that they bring to the table, especially on Lance’s end. That’s how they came to understand the value and viability of a structure that can hold its own against harsh weather.

“We’d love them all to get built,” Alex says of their Doomsday Dwellings that were designed to protect inhabitants from the elements and external factors. The Hero House was designed with an earthquake resistant foundation, the Seed House defends from fire, the Genesis House protects against the threats of nuclear warfare, and the Flood House is a defense against floodwaters. To Alex and Lance, these projects aren’t just the products of paranoid scenarios. Rather, they respond to a spectrum of real threats to property and lives.

“We’re very practical people,” Alex points out. “We’re solution oriented and client focused.” And while the bulk of F9’s projects involve working on additions and conventional homes, a few clients are considering the construction of a Doomsday Dwelling. One potential client in Golden travels frequently and wants to be sure that if another wildfire occurred while he was gone, that his wife and children would be safe, and so would their fireproof home. Lance and Alex have considered every minute detail of this residence, down to the passages of air vents to prevent the entrance of embers that typically ignite insulation and catch roofs on fire. Ultimately, their designs are a success, feasible and fall into the realm of modern. However, looks aren’t everything. “It’s not about style or aesthetic,” Alex explains. “It’s about making good decisions.”

Good decisions are the backbone of F9 Productions. Challenging themselves to pursue progressive concepts while maintaining solid client relationships are what have allowed Alex and Lance to thrive during gloomy economic times. “We’re trying to stay nimble and on our feet like athletes,” Lance says, and attributes F9’s endurance to the friendship he and Alex have upheld; “Alex has changed me as a person, and the humor he brings is huge.” Some of that stems from Alex’s time with Daniel Libeskind. “One key I learned is to put my ego aside,” Alex explains. “There were some extremely talented people in that firm and nobody had an ego.”

So with egos out the window, and a constant drive to evolve, Lance and Alex have discovered their natural niche—creating conventional buildings while conjuring up adaptable ones. “No one else is doing it,” Lance points out. And for some reason, he’s right. F9 has landed on a valuable concept. That our homes should be working harder to protect us, and can without sacrificing elegance. Buildings should be adaptable, the same as plants and animals. This foresight is what will allow firms like F9 to progress into an unforeseen future. Whatever the weather.