An article in our third issue covered the history of Burns Park and the artists who created the works. Burns Park, though often goes undetected and is not well known to even Denver natives, has a fascinating history. Its inception in 1968 brought together nine artists to create installations out of plywood and paint. Scroll below to read the original story. 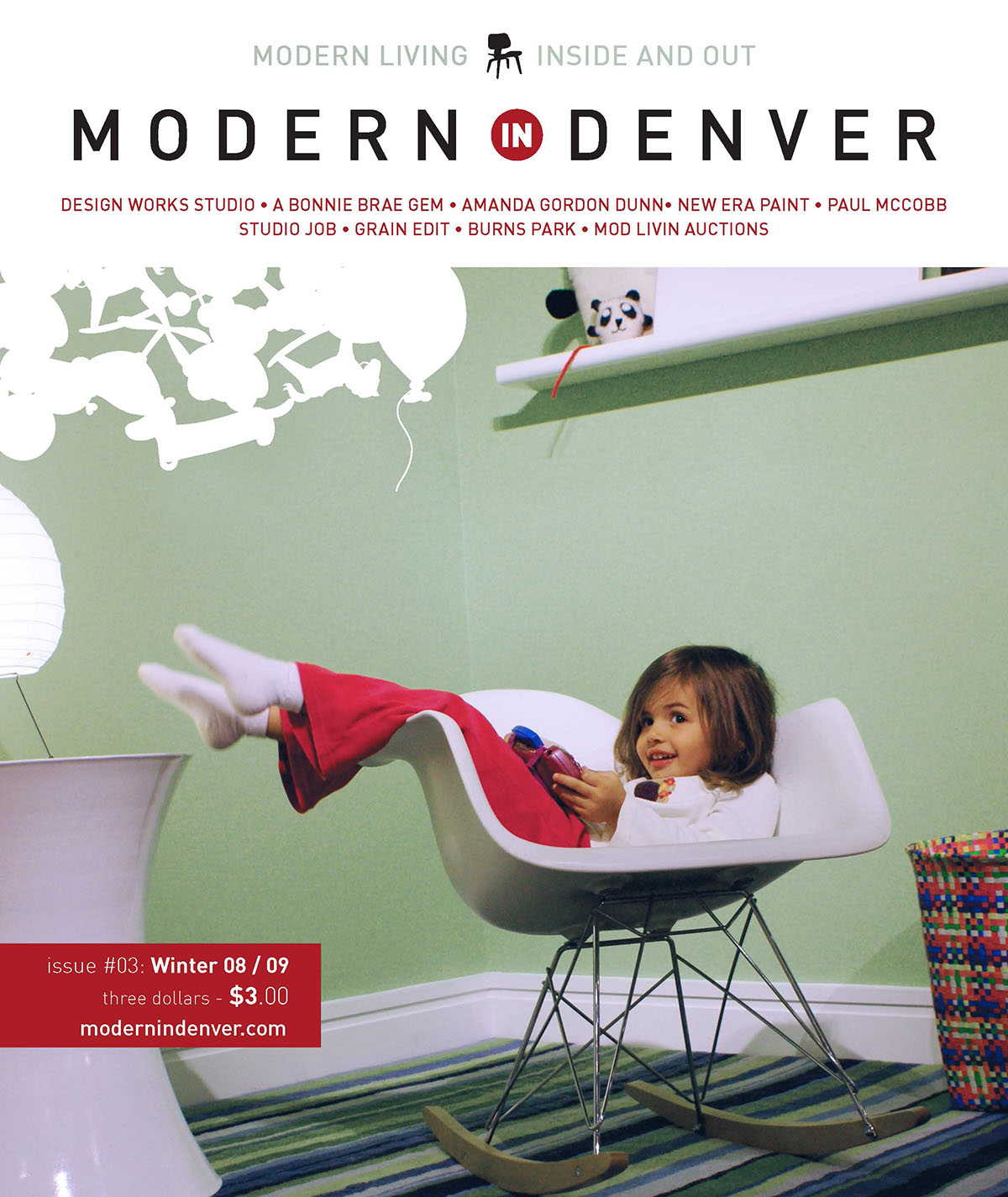 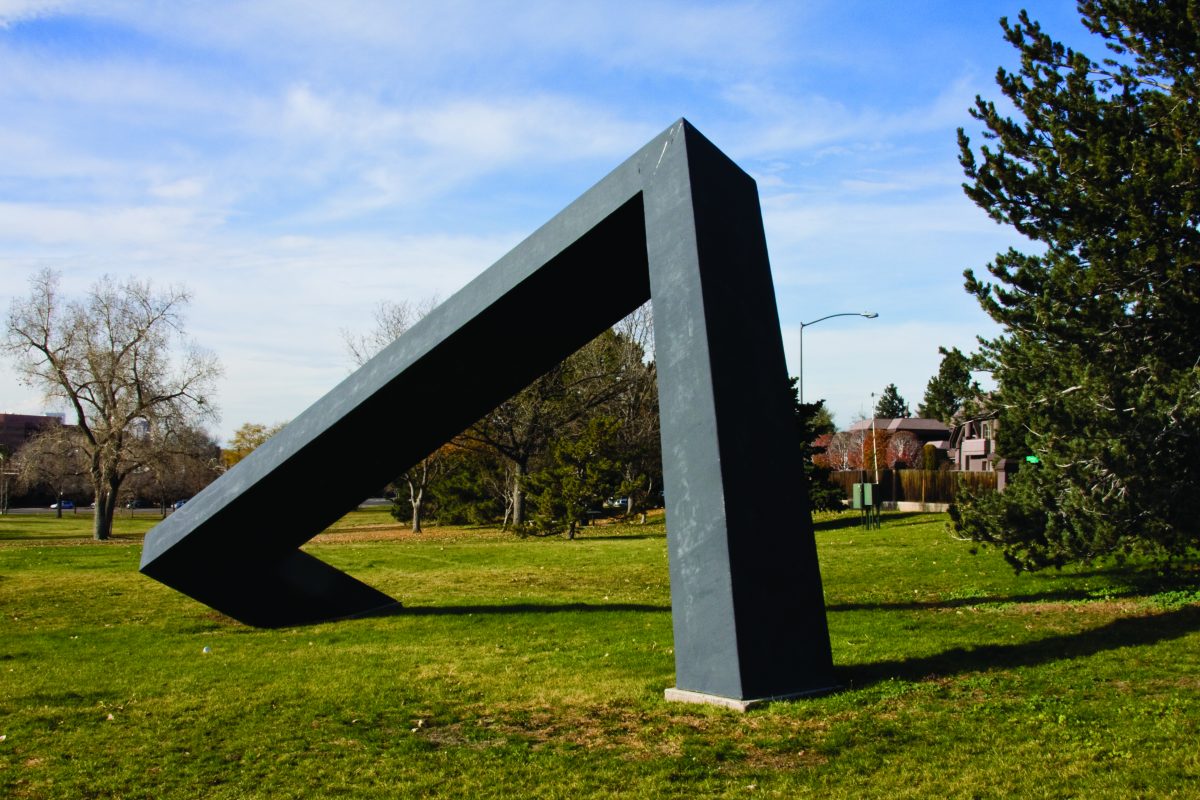 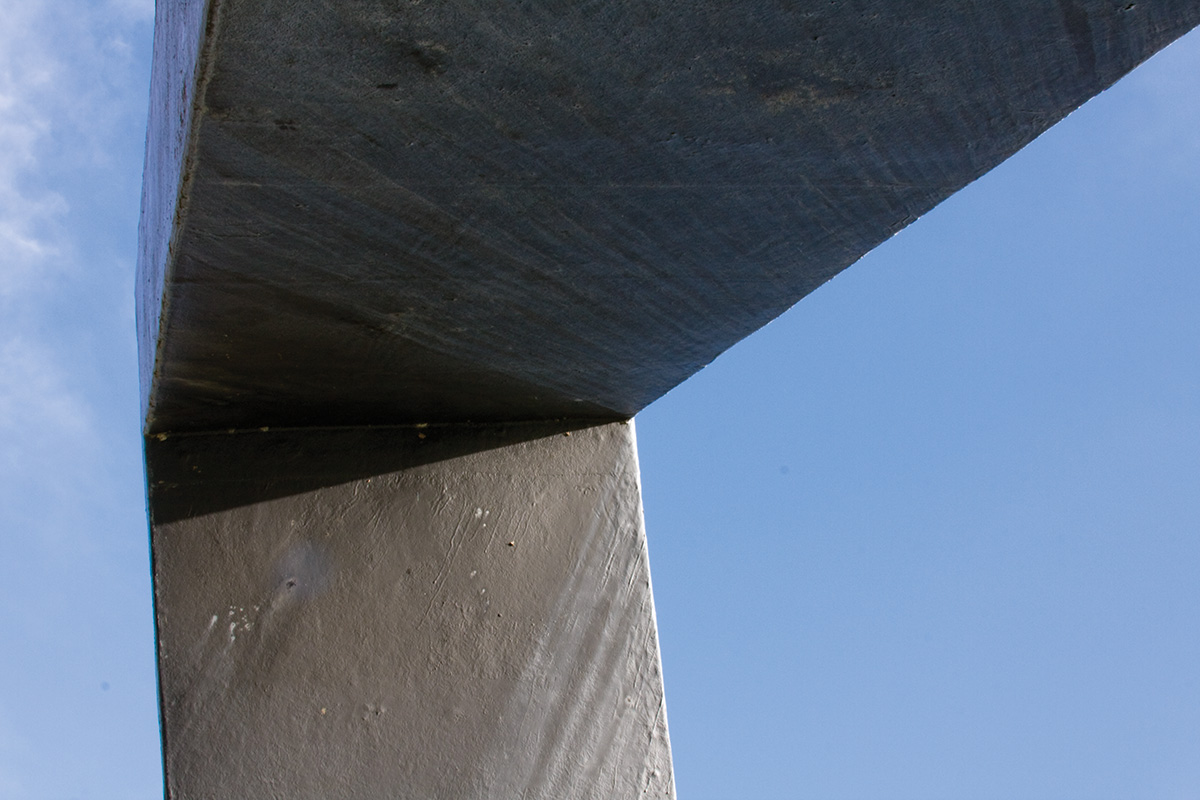 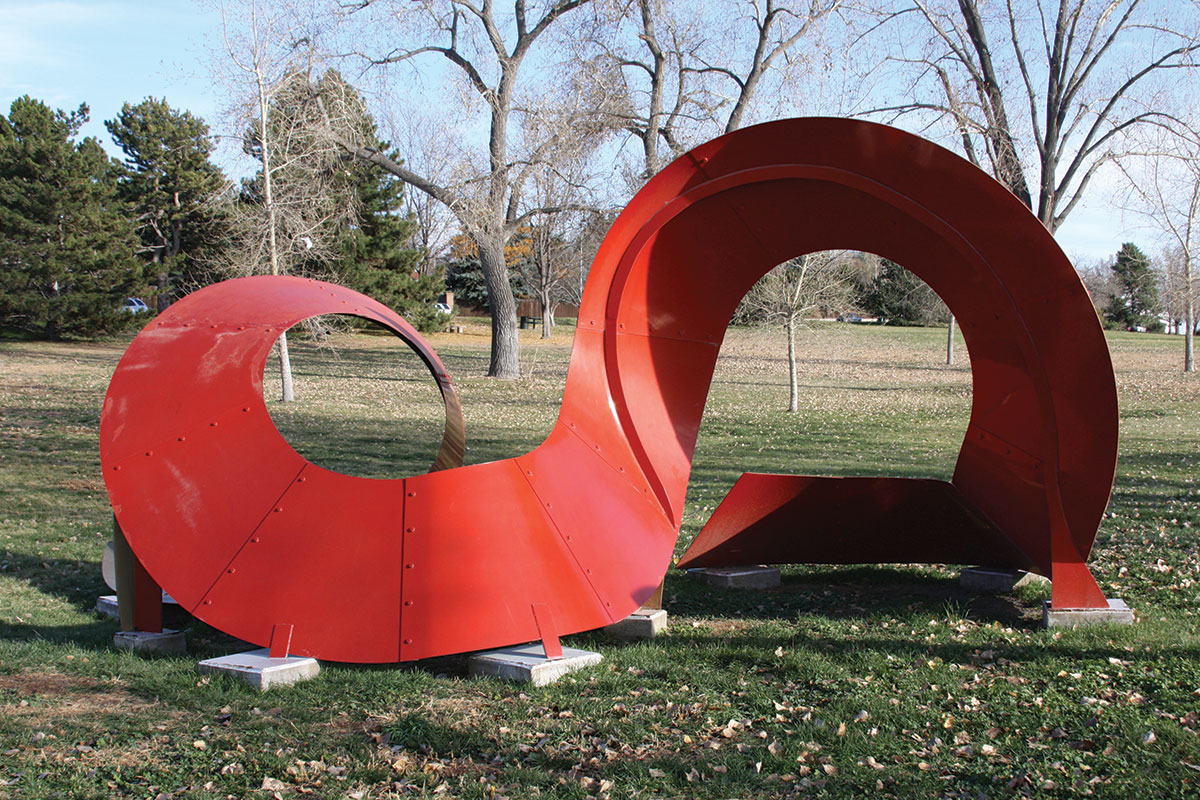 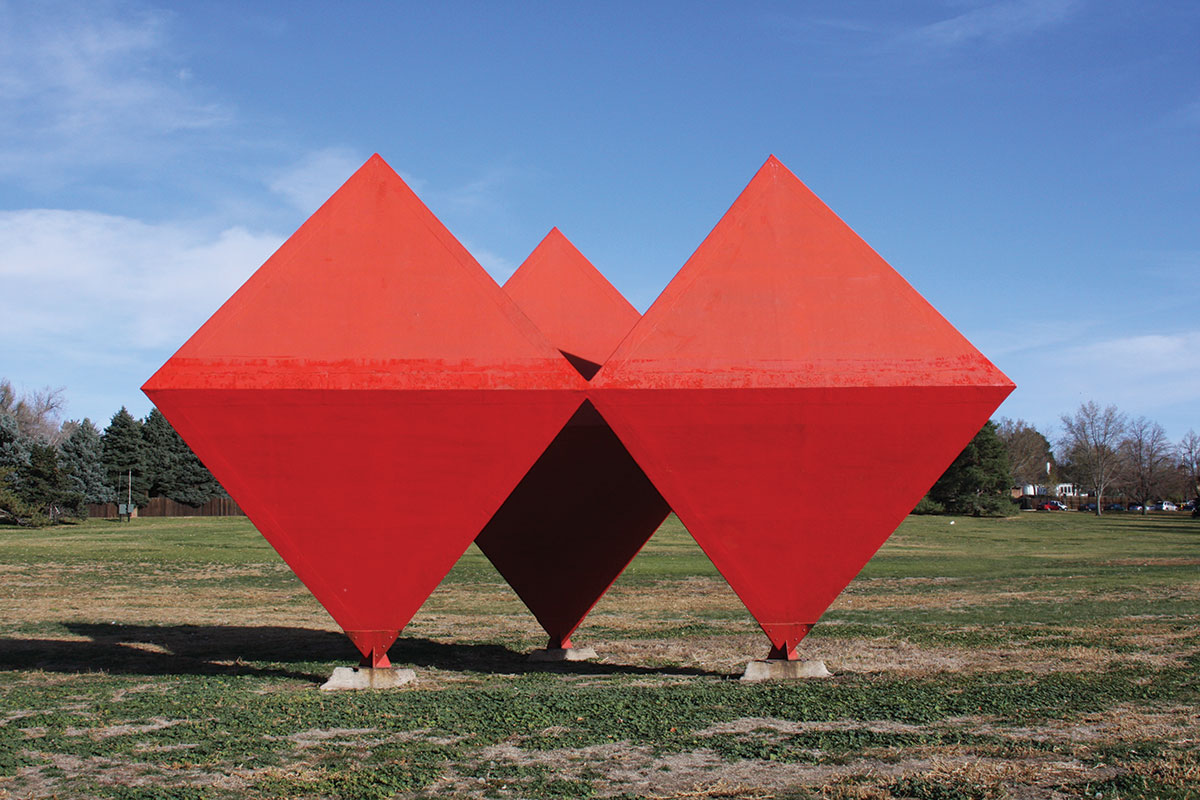 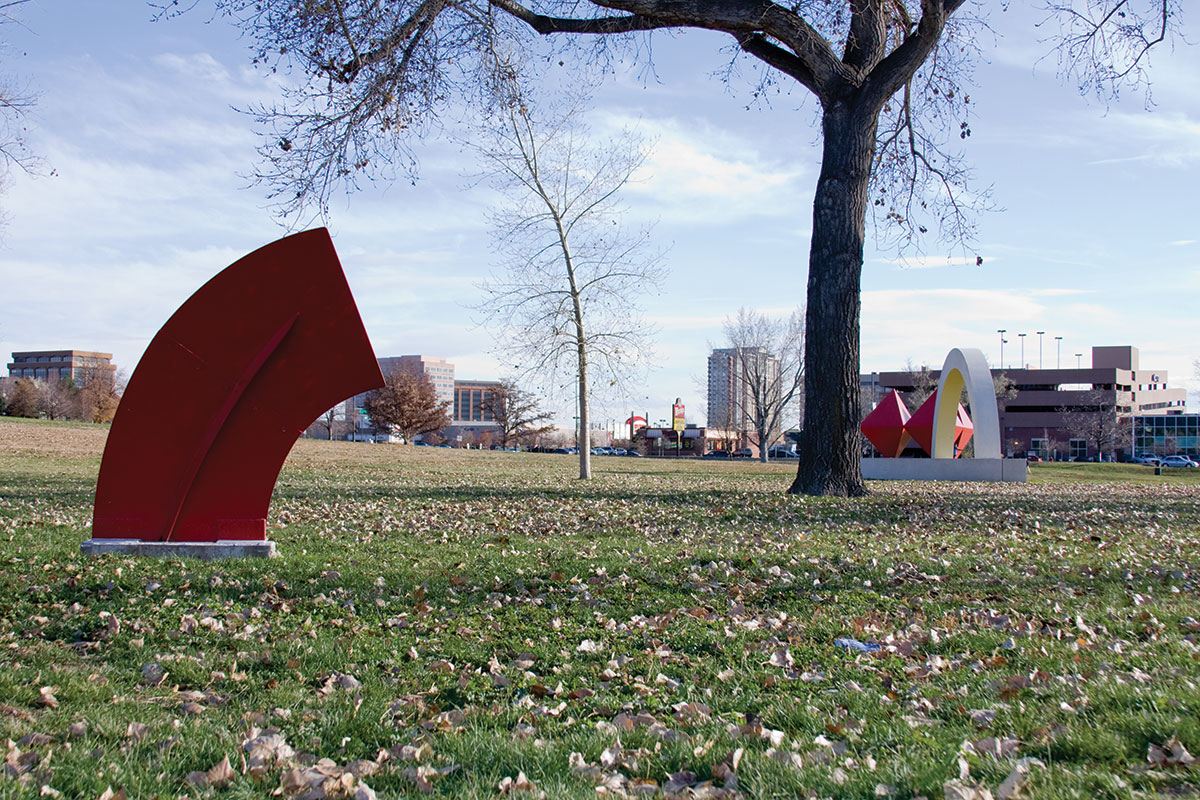 Driving north or south on Colorado Boulevard as it cuts through southeast Denver most drivers catch at least a glimpse of the unusual sculptures rising above the trees at Burns Park, 13.2 grassy acres bounded by Alameda Avenue and Bayaud Street on two sides and Colorado Boulevard on the west. The four sculptures, all that remain from the original nine created back in 1968, are a faint reminder of a time when artists and the city celebrated art for art’s sake.

Back then Burns Park was an isolated site, far from the city’s hub, but in many ways an ideal location because of its easy access and extreme visibility. The park had previously been a weedy and unassuming terrain, an oversized traffic island in some ways, underutilized and more than ready for transformation. It was, in fact, donated by the Denver Parks & Recreation Department for the unique purpose of hosting a display of outdoor art, part of an initiative led by Central City resident Angelo di Benedetto, a contemporary artist who worked in metal and stone.

A sculpture symposium was dedicated to the subject of outdoor art and a total of nine contemporary sculptors of national reputation were invited. The artistic limitations for each were the same – the works would be fabricated in plywood and covered with paint. The only “cost” would be the artists’ labor, since more than 300 donors gave money and materials to bring the project to life. A sum of  $40,000 was raised to cover travel costs for some of the artists, along with a small honorarium.

The dialogue was overseen by a non-profit organization known as “Art for the Cities, Inc.,” headed by di Benedetto. According to local media at the time, the “Art for the Cities” theme generated worldwide buzz, with inquiries arriving for similar projects from as far away as Finland and Japan.

It was decided that Denver’s sculptures would be donated to the city for the Parks & Recreation Department to do with as they pleased with the assumption that the works would endure for three to five years. According to Peggy Mangold, wife of artist Robert Mangold, “the event launched with the delivery of materials to the site, and the open air construction encouraged people to stop and observe. It was extremely interactive. Each day various individuals would provide lunch to the artists and passersby would engage in conversation with the artists about the work.” The finished works were presented and the exhibition opened with much fanfare, a carnival of color and form to be touched, walked through, climbed over and enjoyed by all ages. Gene Amole served as master of ceremonies. The prestigious group of artists in the collection included: Roger Kotoske, University of Denver faculty member; Dean Fleming of New York (and later, Gardner, Colorado); Robert Morris, New York; Peter Forakis, New York; Angelo di Benedetto, Colorado; Richard Van Buren, New York; Bill (Wilbert) Verhelst, Colorado; Anthony Magar, Great Britain (and University of Denver art professor); and Robert Mangold, Colorado. All left their mark in bright minimalist works that brought the essence of the New York abstract expressionist movement of the 1960s straight to Denver.

Even in the few sculptures that remain in the park today, battered by the elements and local bird life, one can see the influences of sixties artists such as Ellsworth Kelly, a painter and sculptor; steel sculptor and abstract constructivist David Smith; and painter and sculptor Frank Stella. Di Benedetto’s yellow-and-white, two-part arch especially reflects the artistic sensibilities of the time, a preference for hardedge geometry devoid of representation. (This work was later reconstructed in cast concrete for safety and permanence.)

The city of Denver was transitioning from a place of casual informality to one of greater sophistication with arts communities downtown and in Cherry Creek, and residential growth mushrooming along the city’s periphery. For those who remember, a local independent gas station on the corner adjacent to Burns Park bore a sign that read “Welcome to Cow Town –Bob’s Place– Let A Bobcat Serve You,” a strange contrast in message and spirit to the bold examples of abstract art across the street.  In some ways, in terms of both art and the city, that juxtaposition still continues to this day.

Public art serves many purposes – to commemorate, define, entertain or amuse. It can also enhance or set apart, often serving as a landmark that manifests an idea or ideal. Here, no lofty intention prevailed. Rather, the symposium’s purpose appears to have been the simple engagement of art and the public, allowing the viewer to move through a space defined by the sculptures and experience them in their totality. Some 44 years later, it is obvious that the sculptures and the experience have not only endured, but also spawned a new initiative for future generations.

In 1995, a new team of 10 regional artists under the direction of a new organization, Friends of Burns Park, plus Joyce Oberfeld and the Denver Office of Cultural Affairs, set out to restore the former vigor of the landscape, since several of the works had begun to succumb to the elements. The Kotoske piece was removed due to arson, which left it irreparably damaged, and the bold, yellow-and-blue open cube designed by Dean Fleming, closest to Colorado Boulevard, was removed due to extreme deterioration.

A new work was chosen by local artist Robert Mangold but later withdrawn by the artist. It was replaced with a work by Denver artist Barbara Baer – a red, curving steel abstraction that was placed on the north end of the park. The new committee’s efforts were soon halted, however, due to ambiguities over the project’s funding and ownership. In the end, the Baer installation was the only step in the new direction.

According to Kendall L. Peterson, Public Art Administrator at the Denver Office of Cultural Affairs, the city hopes to reinvigorate and support the park in several ways in 2009. “With new input from supportive and concerned individuals,” explains Peterson, “we’ll look for ways to increase foot traffic and awareness of the park. The Denver Office of Cultural Affairs office has, in fact, attempted to deal with the park’s perpetuity as a sculpture garden. But naturally, all plans are dependent on budget and feasibility.”

Meanwhile, a small parking area provides a safe and easy way to access the park by car. One can then proceed by foot, making Burns Park a stop well worth the time of anyone who appreciates art and the outdoors.