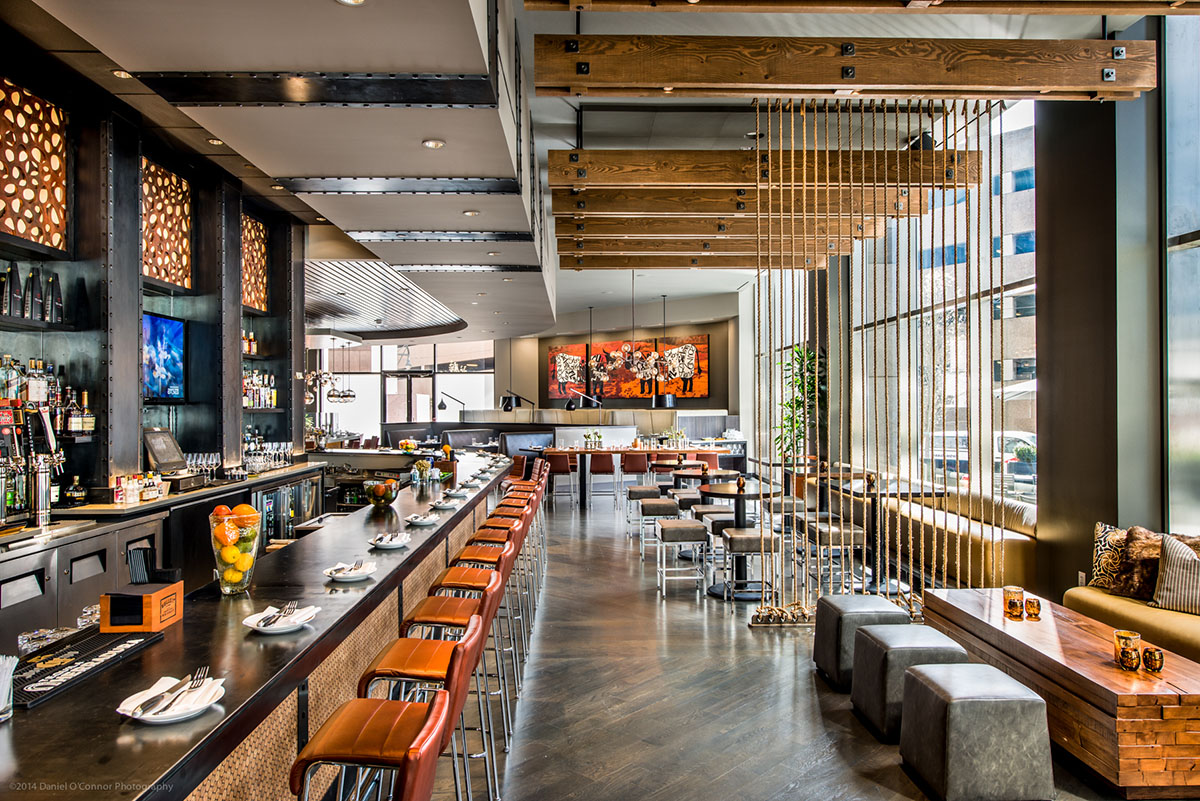 Award-winning interior design firm, Kimberly Timmons Interiors, is celebrating 20 years of bringing fresh and clean designs throughout Denver and beyond, like Guard and Grace Restaurant or the Yunling Mountain Golf Clubhouse in China. What began as a miniature log cabin construction with her father at a young age, founder Kimberly Timmons-Beutner’s career has grown into a reputable and thriving influence in the interior design world. Read Modern In Denver‘s Kris Scott’s piece below. 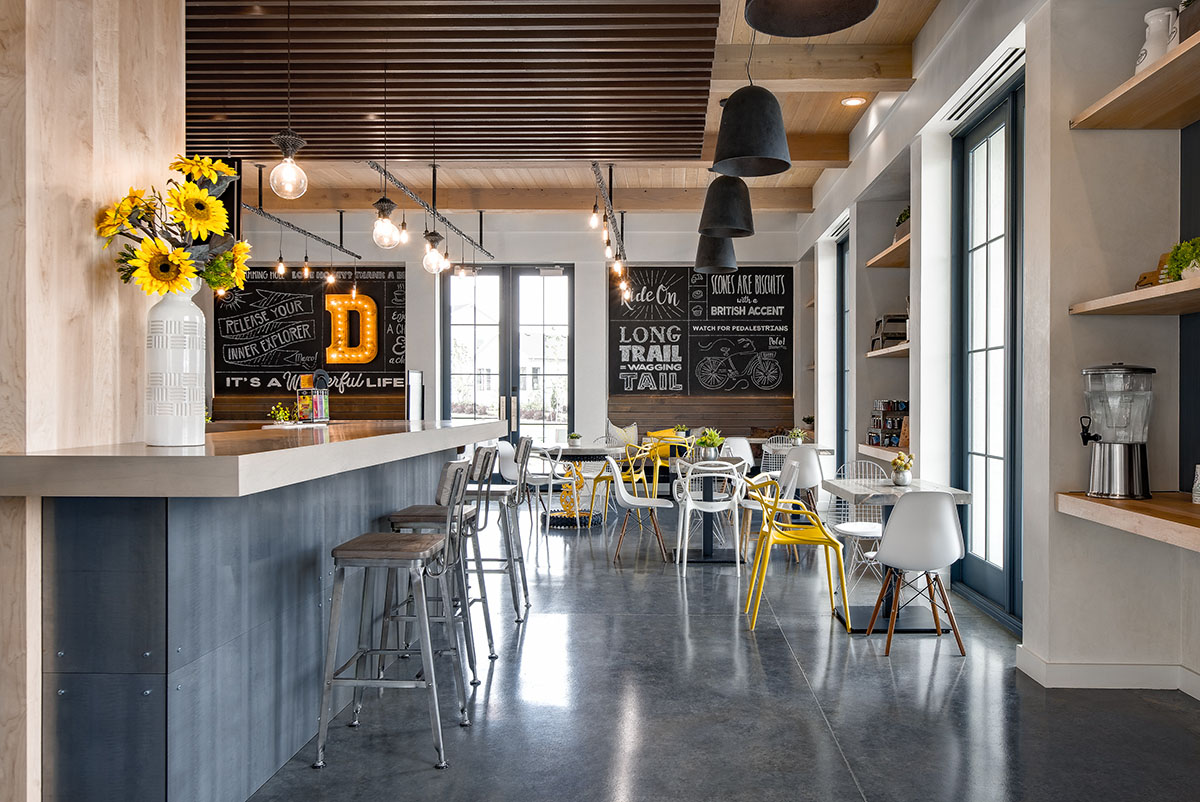 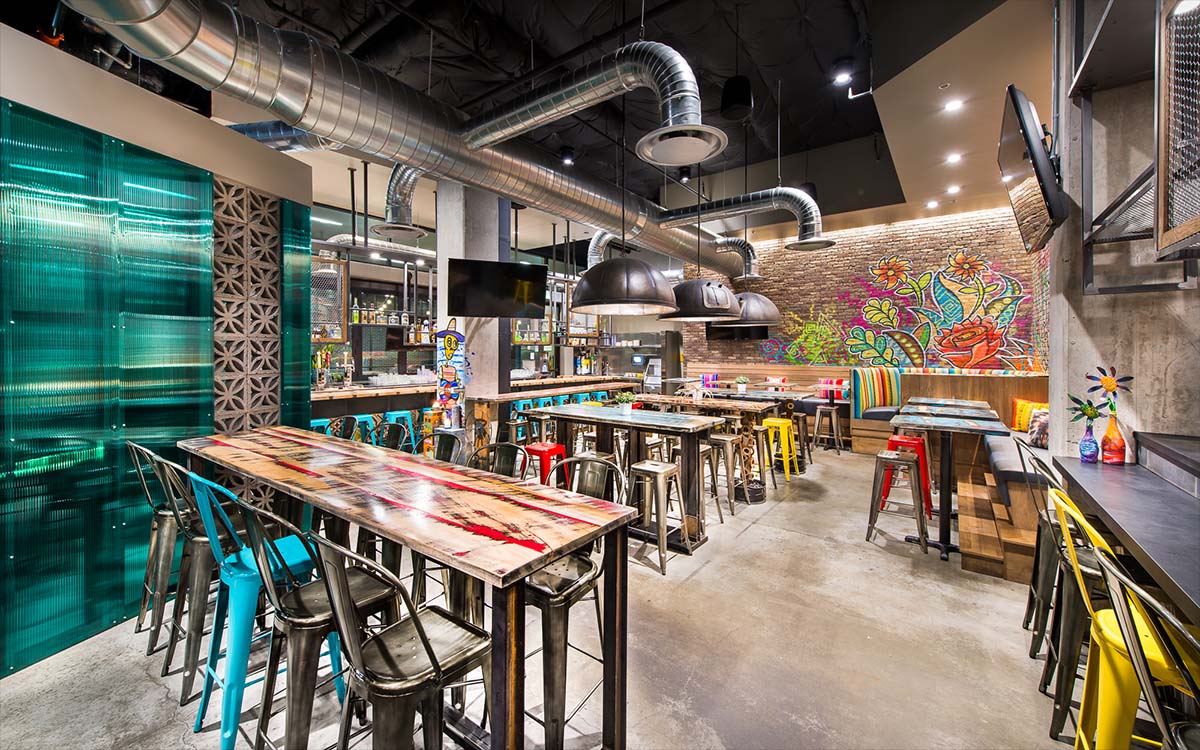 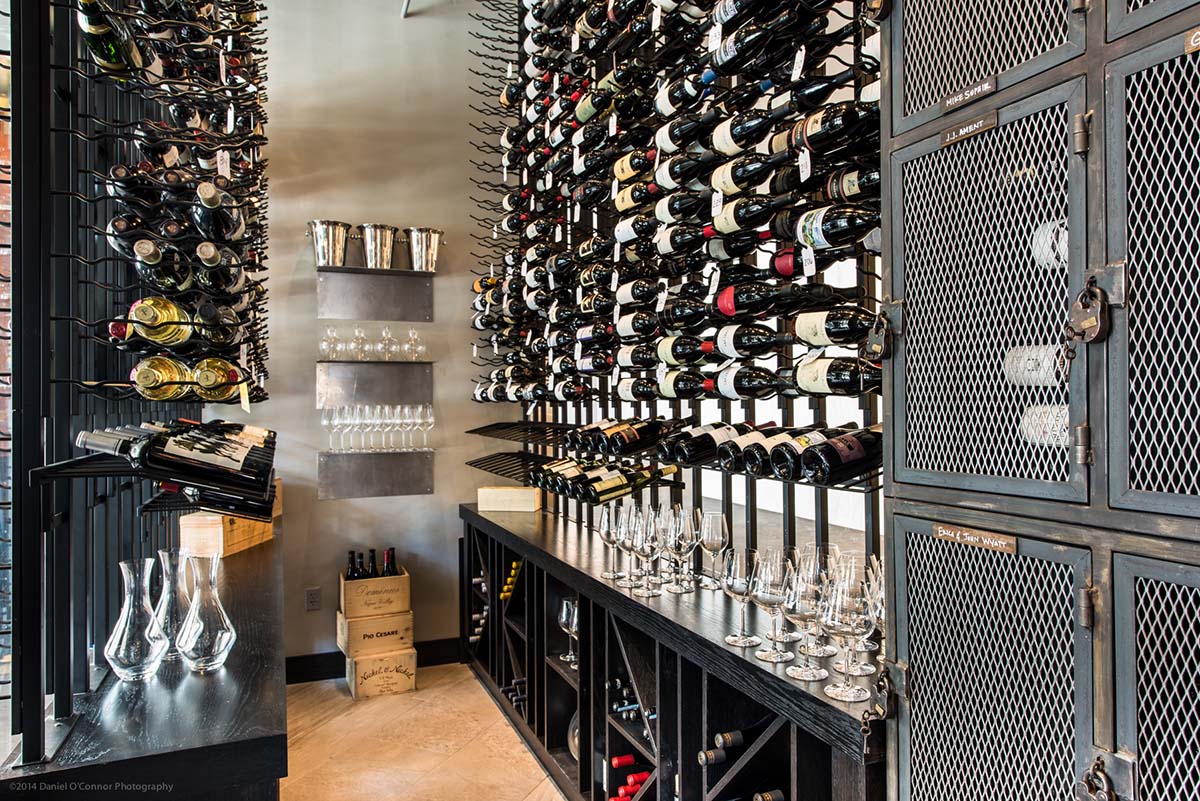 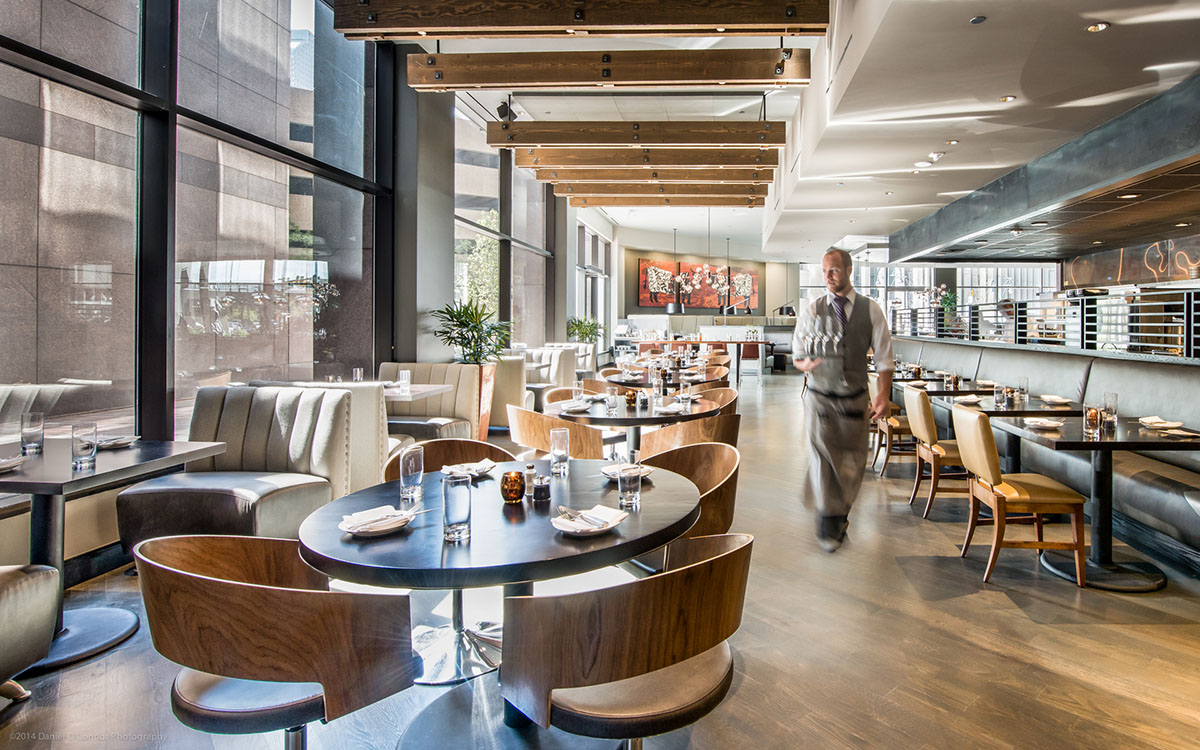 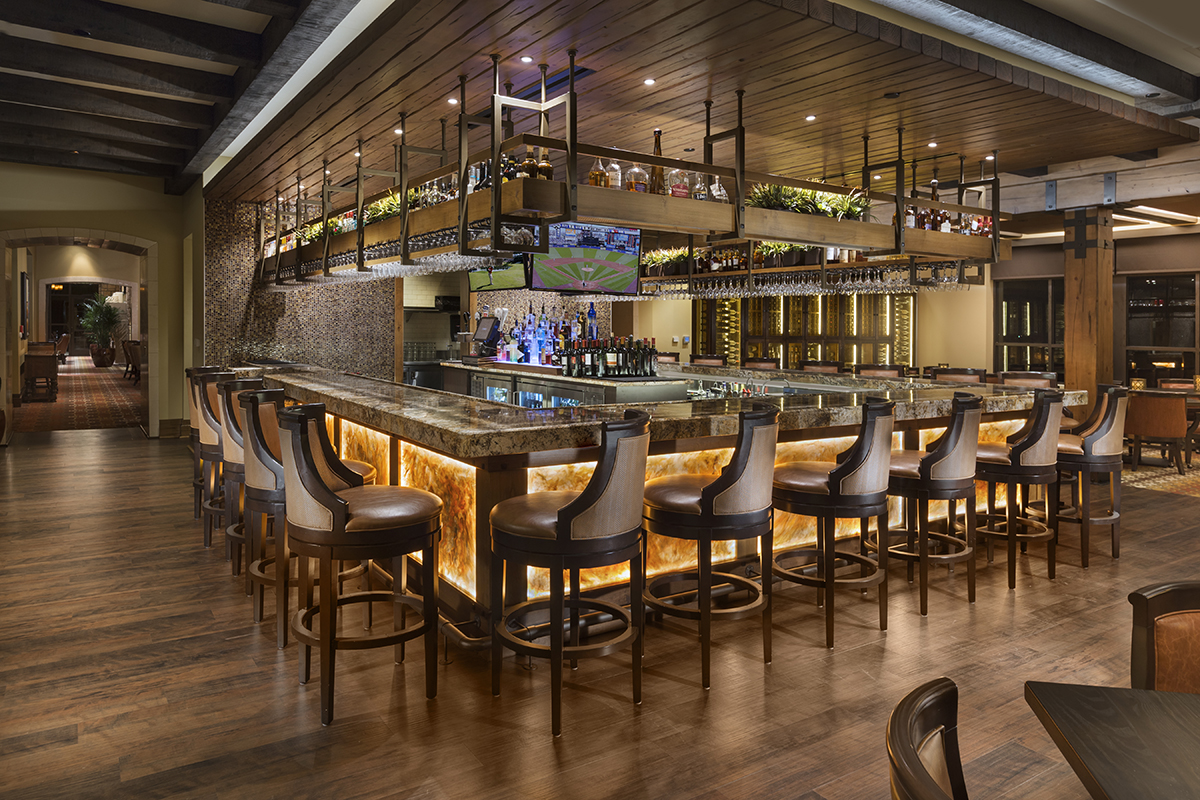 Kimberly Timmons-Beutner is talking to someone on the phone when a team member’s dog wanders in for its daily treat ration. “I’m sorry. I got distracted …” she explains after a brief pause to dole out the expected kibble.

There aren’t many people who wouldn’t enjoy working at a place like Kimberly Timmons Interiors, or KTI. Employees are encouraged to bring their pups to work, barbecues and cornhole games take place out in the office parking lot, and more than one bottle of wine has been popped open on a Friday afternoon after a particularly rewarding work week. Employees have also been gifted slippers — to wear around the office.

While these things by no means define KTI or its work — more on that to come — they certainly give a feel for how dedicated this group of 23 people are to their profession. “We spend more hours a day at work than we do at home, so we want it to be enjoyable,” Timmons-Beutner says.

It’s that dedication that has also led to the company’s longevity. This year, KTI is celebrating 20 years in business, though its inception started well before the late ’90s. Timmons-Beutner recalls enlisting her father’s help in constructing a miniature log cabin when she was 8. Her father, a draftsman, handled the build, but she recalls “visualizing what the house should look like. I made all the furniture, draperies and soft goods for it. It wasn’t very fancy, but it was nice for my first interior design project.”

Though “fancy” might not have factored in then, it does now. KTI’s hospitality projects, which average two to four years from start to finish, often win design awards — enough to have an office trophy case that holds well over 100 design awards — for their sophisticated, tailored and detailed approach.

Timmons-Beutner started her business in a spare bedroom of her home and, though growth was slow but steady for the first few years, things really started to take off around the 10-year mark. She teamed up with the TAG Restaurant Group’s Troy Guard to design its first restaurant interior. The resulting TAG Restaurant won multiple regional and local design awards, and 5280 magazine named it Denver’s best new restaurant that year. Its success led to another collaboration in 2014, the Guard and Grace steakhouse, and KTI and TAG would go on to work on three more restaurant openings together. That same year also brought the finish of KTI’s first international project, the Yunling Mountain Golf Clubhouse in Kunming, China.

Fast forward to the present, and KTI’s growth has not slowed. The firm now occupies a 7,500-square-foot Golden Triangle neighborhood space with three separate design studios— hospitality, residential and interior merchandising. Timmons-Beutner describes her team as “a brain trust of motivated, talented designers with a collaborative, versatile approach to design.” In fact, she adds, KTI’s culture is “rooted in collaboration,” something else that has been key to its success. The three studio teams “work together helping one another create the most appropriate, well-rounded, unique solution for each project. We strive to continuously raise the bar for ourselves and, as designers, we are always pushing to do each project better, different and fresh from the project before,” Timmons-Beutner says.

One of KTI’s more recent projects is The Laurel, a high-rise luxury condominium community in Cherry Creek slated to be completed this November. KTI designed the public spaces, including a main lobby and roof-top deck, and chose “eclectic high-end finishes and fixtures” for its residential units. “It’s really modern and gorgeous and very high end,” says KTI designer LeKathryn Champine, adding that the public spaces are characterized by “rich materials of textured walnut wood, striking stones that clad the floors, walls and ceiling, and inviting furnishings with exquisite lines and luxurious fabrics … the experience will be like a being in a high-end resort.”

The firm also recently completed a meeting center for Welk Resorts’ The Ranahan in Breckenridge. Knowing the property was once a working ranch helped drive the design. KTI employed a saturated mineral-inspired color palette and authentic relics from the mining industry’s history, including a two-story sculpture designed by Studio Obermeier-Sheykhet Architecture and made entirely out of sourced and re-purposed mining equipment that enhances an open stairway. “KTI strived to be sensitive to the region, with a nod to the history and mountain living, but adding modern influences,” says Champine. The firm will also take the design helm for the resort’s upcoming Accommodations Building, which just broke ground.

It’s details like these that are a hallmark of KTI’s work, Timmons-Beutner says. “I think we always try to push the design a little bit further by considering every detail, down to the last accessory in a room or the art pieces — really curating specifically for each project. The more you study our designs the more you’ll see the layering of details.”

KTI’s collaborative, detail-driven approach has earned the firm repeat business throughout the years, with long-term clients like TAG Restaurant Group, Robson Communities and others coming back to the firm again and again. It’s fitting that, as the firm reflects on 20 years of growth and success, Timmons-Beutner calls 2018 “one of the biggest years we’ve ever had.”

“I remember one of my biggest goals was to always create unique and memorable design,” Timmons-Beutner recalls. “I have always strived to go above and beyond for our clients. I know I sometimes drive my designers crazy by pushing them to be the best they can be, but I think it pays off in the end when the client is happy or someone is enjoying an environment we helped create”