IN HONOR OF HER 100th BIRTHDAY, WE PAY HOMAGE TO FLORENCE KNOLL, WHOSE TRANSCENDENT MID-CENTURY FURNITURE AND OFFICE DESIGNS ARE STILL SHAPING THE WAY WE LIVE AND WORK TODAY. 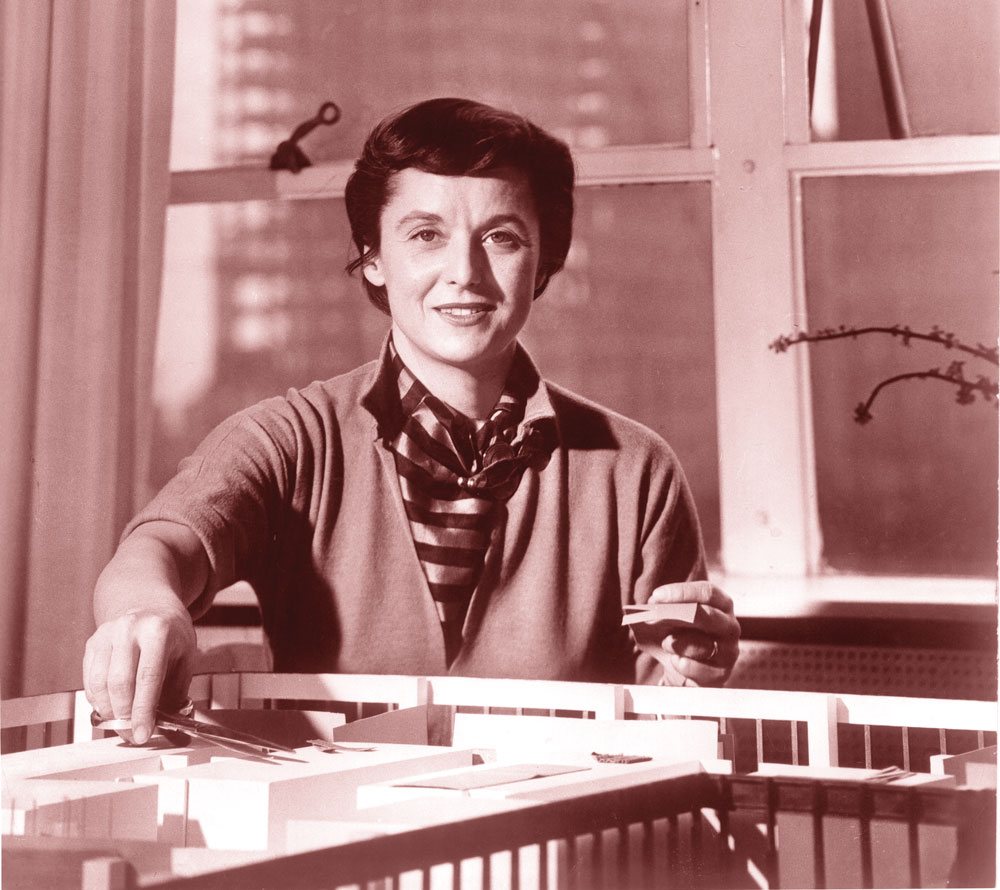 We owe the offices that we work in—and many of the rooms we live in—to the keen eye and forward thinking of architect, designer and planner Florence Knoll, who on May 24th, 2017 celebrated the centennial of her birth.

“In many ways, the look of post-war America wouldn’t have happened without Florence Knoll,” says Tim Andreadis, head of the Department of Twentieth Century Design at Freeman’s Auction House, the nation’s oldest.

By founding the discipline of interior space planning in the U.S. in the 1950s, she essentially created the look of 20th century corporate America. It’s a look based on practical use, comfort and aesthetics. And it can be seen in her work designing Modernist interiors in such places as CBS, the Heinz Research Center, Connecticut General, Idlewild (now JFK) Airport and the General Motors Technical Center. 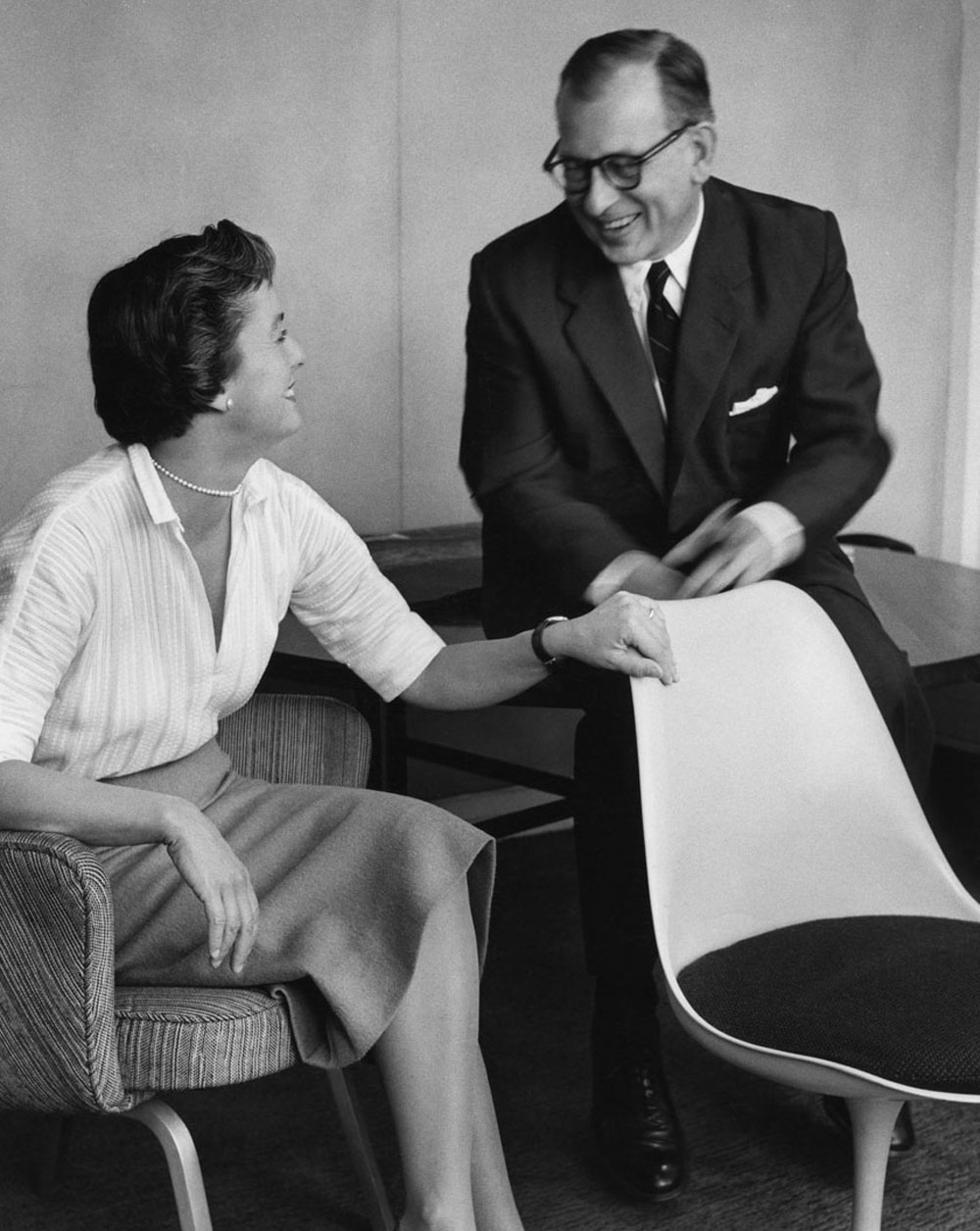 Knoll with lifelong friend and associate Eero Saarinen and his Tulip Chair, brought furniture by him and other influential mid-century designers like Miles van der Rohe and Harry Bertoia to the American public.

“Florence Knoll translated the Bauhaus idea of the gesamtkunstwerk, or ‘total work of art,’ to the American public and corporate world of the 1950s and 1960s,” says Benjamin Pardo, executive vice president for design at Knoll headquarters in Pennsylvania. “This helped to define American Modernism and setting a precedent for design that is holistic rather than object-focused. She inaugurated an era of integrated design that remains vital today.” 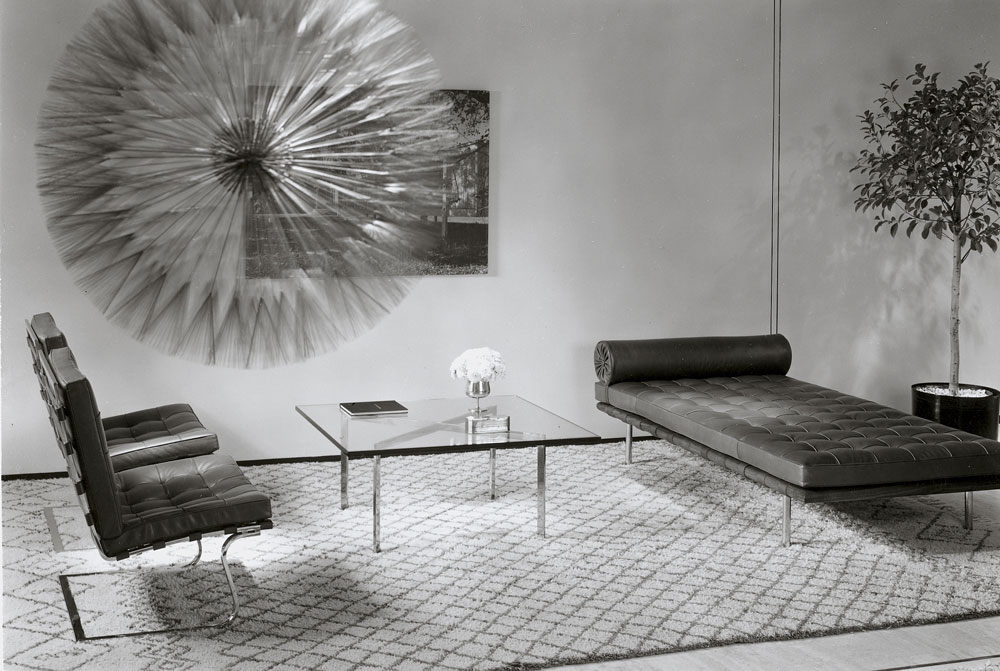 And this year, the company has added new products to the Florence Knoll Collection, including a hairpin stacking table, a mini desk and more relaxed lounge seating. Her original pieces are in demand at auction today, too. “New generations of furniture buyers still respond to the sculptural, graphic forms created by Knoll in the forties, fifties and sixties,” says Andreadis. “The longevity of this furniture is remarkable.” 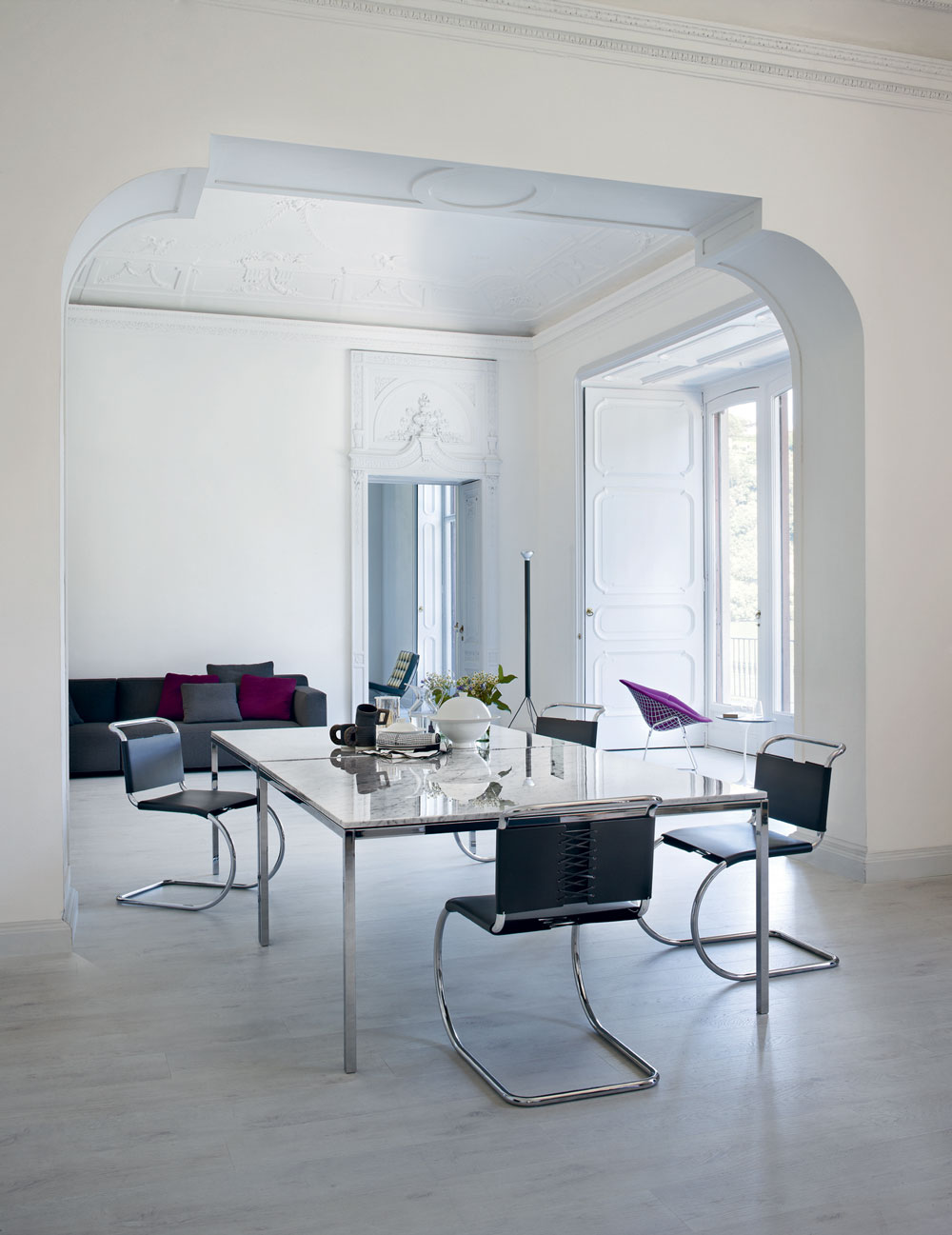 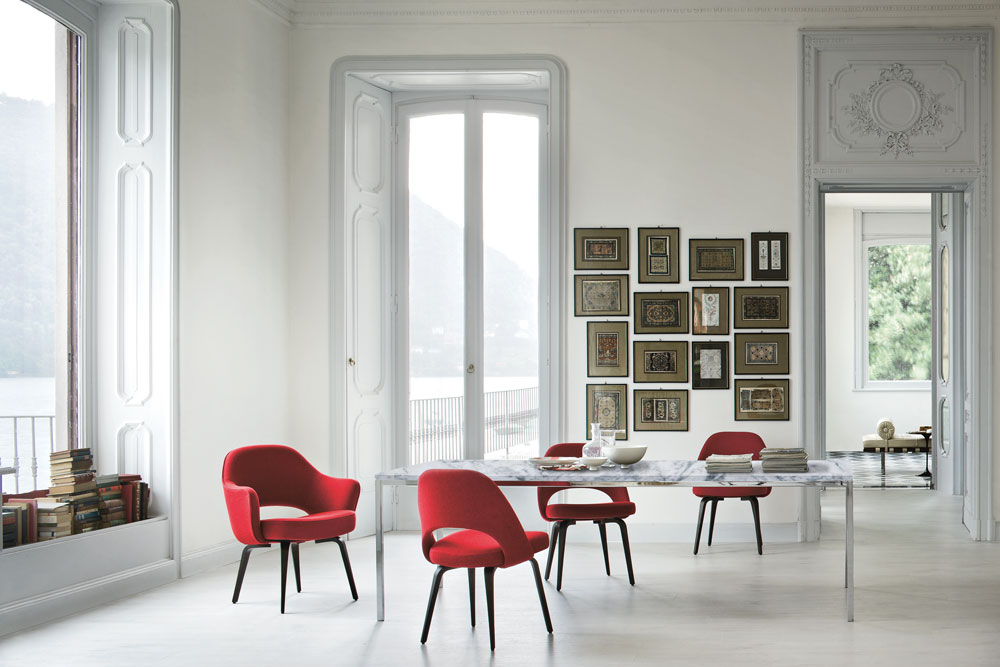 Knoll was known as much for starting her company’s Planning Unit as for designing furniture. The unit applied architectural design principles to solve space problems, heavily influencing  the look of the American business office for more than half a century.

Knoll, born Florence Schust (known affectionately as “Shu” to friends) was really bred to become one of the preeminent voices of the Bauhaus in America. Orphaned at age 12, she attended the Kingswood School in Bloomfield Hills, Michigan, where she came under the tutelage of architect Eliel Saarinen. She learned about texture and color from his weaver wife, Loja, and befriended his son, Eero. Her summers were spent with the Saarinen family in Europe viewing art and architecture.

She went on to study at the Cranbrook Academy of Art, the Architectural Association in London and under van der Rohe at the Illinois Institute of Technology, where she earned her architectural degree. She joined Hans Knoll’s furniture company in 1943 as an interior designer. The two married in 1946 and changed the company name to Knoll Associates. When her husband died in 1955, she became company president. She retired in 1960, but remained as Knoll’s director of design until 1965. (She remarried and has been known ever since as Florence Knoll Bassett.)

The recipient of many honors, including the National Medal of the Arts, the American Society of Interior Designers’ Total Design Award and the American Institute of Architects’ Industrial Design Gold Medal, Knoll kept up her connection with the company, collaborating, for example, on a 2004 Philadelphia Museum of Art exhibition called “Defining Modern.” “She was known for an extremely exacting eye—determining proportions, angles, materials, and other details down to the most minute level, always aware that the smallest decisions profoundly affect the overall outcome of a project, be it a sprawling office interior or a side chair,” says Pardo. 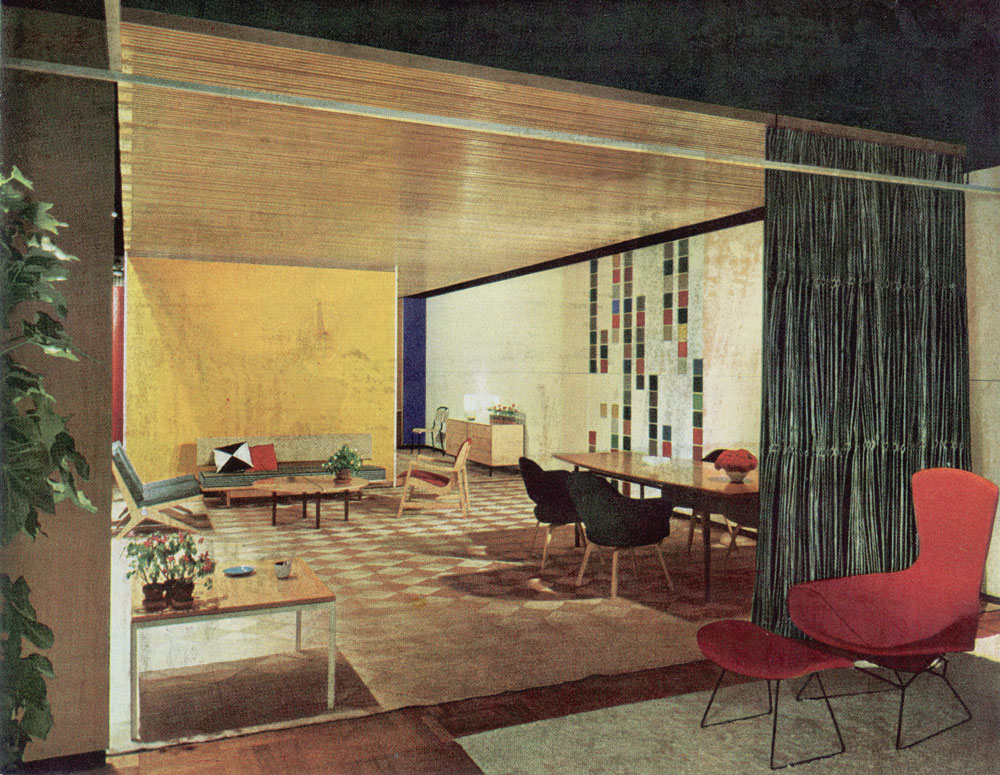 A 1953 image of the Knoll showroom in Chicago.

Maintaining that she did not merely decorate space but create it, Knoll in 1946 established Knoll’s Planning Unit, applying design principles to solve space problems. This was a totally new concept at the time, but is widely practiced today. “She thought about things from floor to ceiling,” Andreadis states. “From the carpet color to how to divide up a big empty space to how to plan for efficiency. And she used furniture designed specifically for the space, where the forms really followed the function. She wouldn’t just throw any chair or cabinet in there—it had to be purposeful.”

The Planning Unit rigorously researched each client—assessing their needs, defining patterns of use and understanding company hierarchies—before presenting a comprehensive design. Known for the philosophy “Good design is good business,” Knoll demonstrated that thoughtful spatial planning and high-quality furniture could improve the experiences of people, thereby improving their businesses. “There was something really bright, fun and engaging about her designs that represented a kind of American ambition and optimism,” sums up Andreadis. “She could go toe-to-toe with the best of them—men or women—and win out because her understanding of design and planning was really unrivaled. She really does stand alone.”