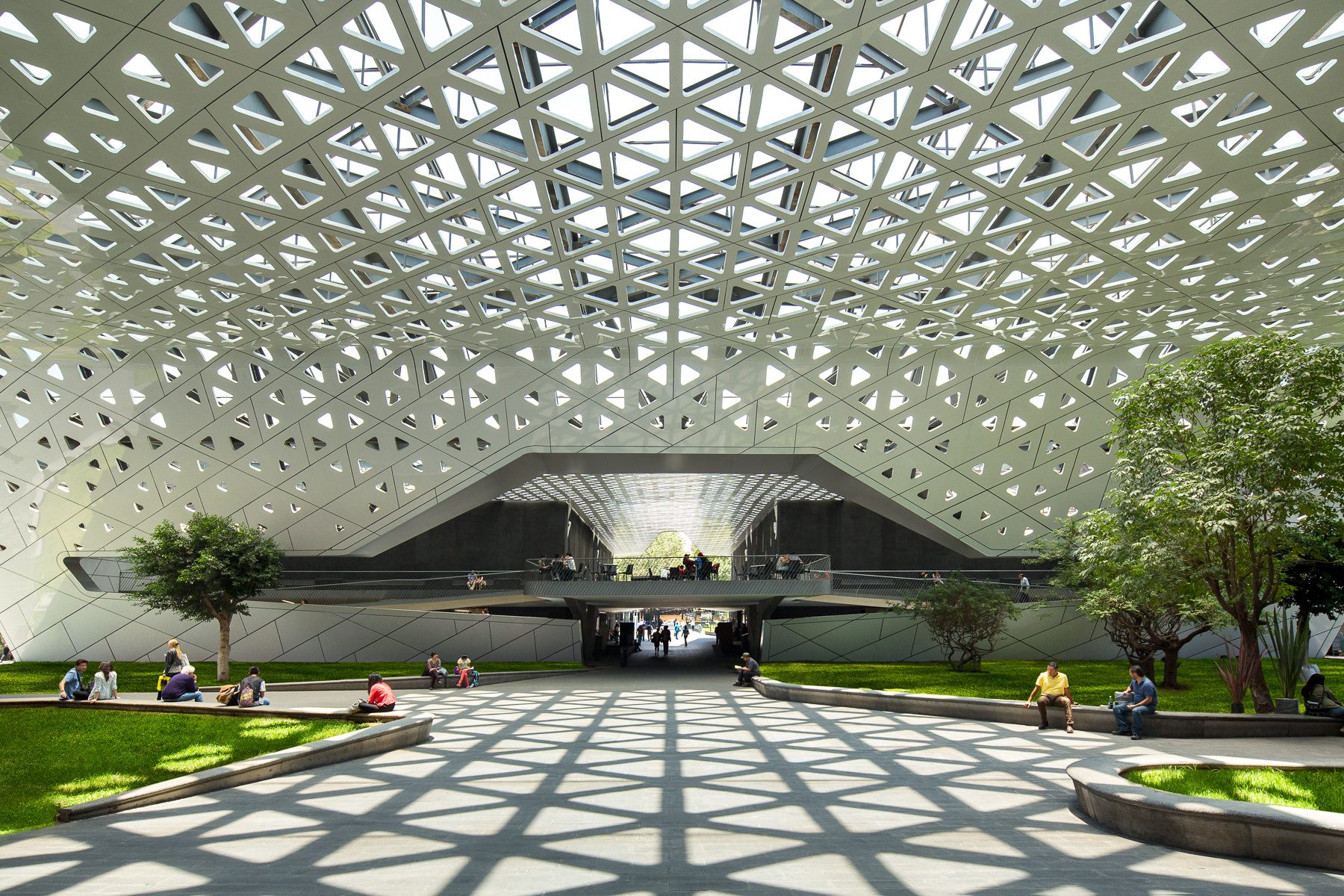 Cineteca Nacional, the film institute of Mexico City and the busiest film center in the world, has been rescuing, preserving and promoting Mexican films for more than 40 years. After a fire severely damaged the space in 1982, a temporary home was built in its place. Decades later, under President Vincente Fox, it was decided a renovation of the original space was finally in order. The catch? There was only a year to get it done.

The upgrade and expansion to Cineteca Nacional became Fox’s legacy project, achieved during his final year in office. However, in contrast to procedures involving US presidential libraries, a Mexican president’s project has be finished before he leaves office. In the case of the Cineteca, locally based Rojkind Arquitectos was given the task, and a massive to-do list–while the clock was ticking. 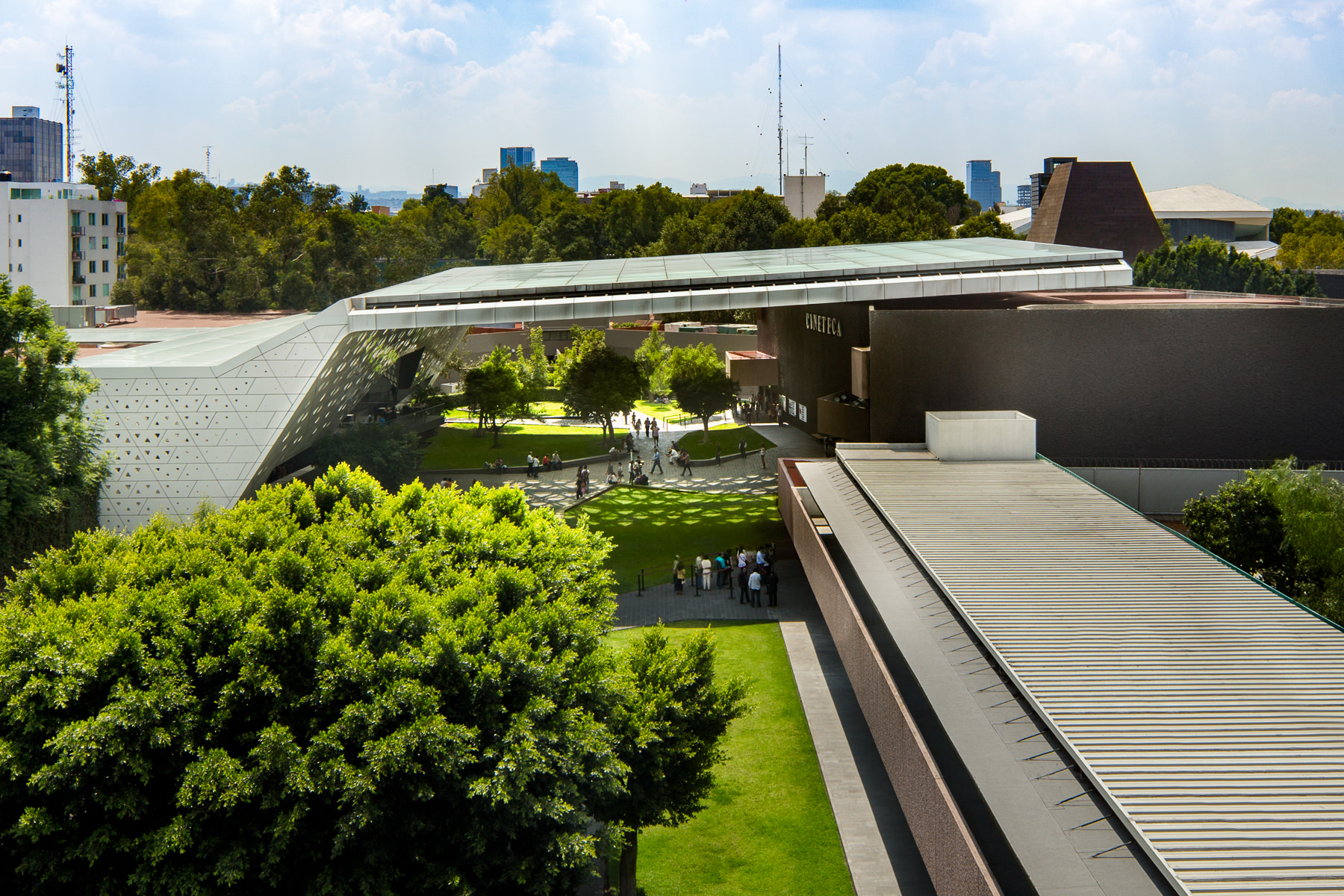 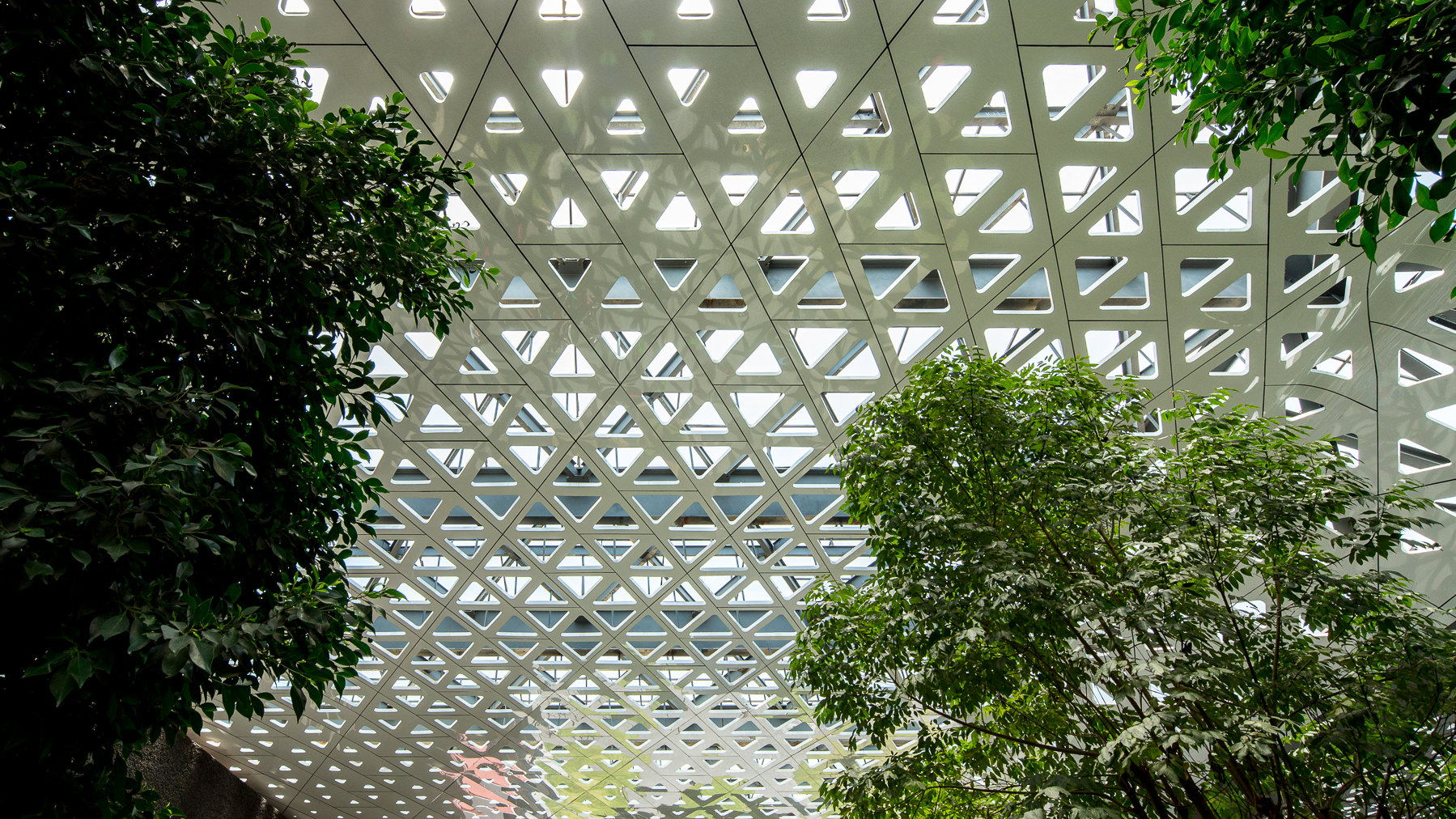 When working under such pressure, Michel Rojkind, principal at Rojkind Arquitectos, found the project stimulating. “You have to be very articulated and very capable of synthesizing an idea,” he says. “[It was] challenging in terms of what we could do design wise to bring in to a final conclusion in the way we like it.”

Located between a busy hospital, a university, and a popular subway station, Cineteca serves not only as a film center but as a thoroughfare. Thousands of people pass through on a daily basis—commuting, taking their lunch break, or meeting friends at their gathering place. The space, covering over 300,000 square feet in the busy neighborhood of Xoco, was falling into disrepair. The client requested four new theaters, new archives for its collection of over 50,000 films, and a parking solution. 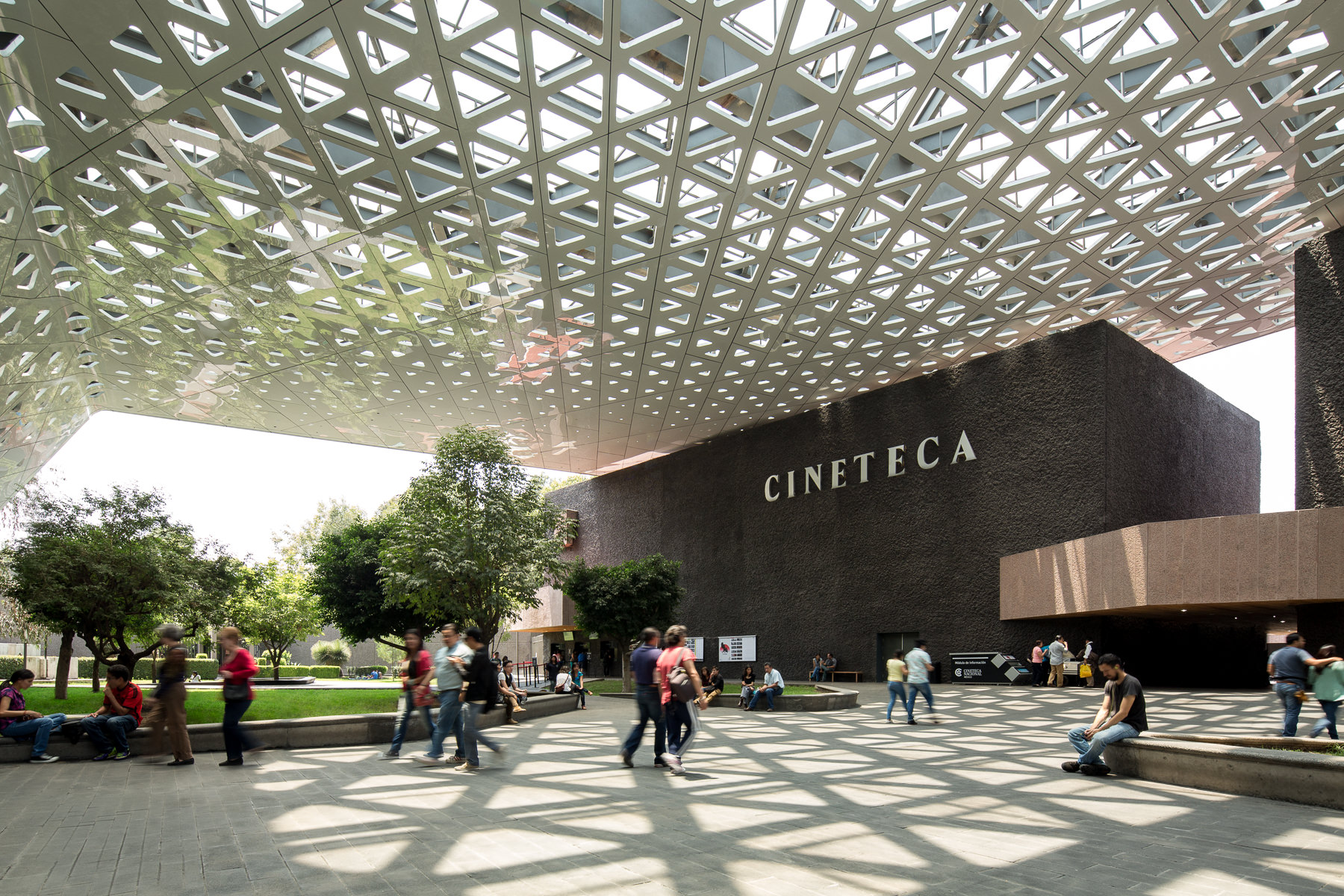 “Fortunately we convinced the client to take the cars out so we could reclaim the park,” says Rojkind, with a laugh. “There was some hesitation—they didn’t think it could work—but we convinced them and now it’s the best thing about Cineteca, the gardens!”

The structure’s open shade aluminum canopy roofing is what makes this public space a phenomenal showpiece. With triangular shapes cut on a diagonal into layers of aluminum, steel, and glass, the light is dynamic. “The whole experience of how light is projected, and the shadows, to play with that diagram on the rooftop, we made a play on the moving image,” explains Rojkind. 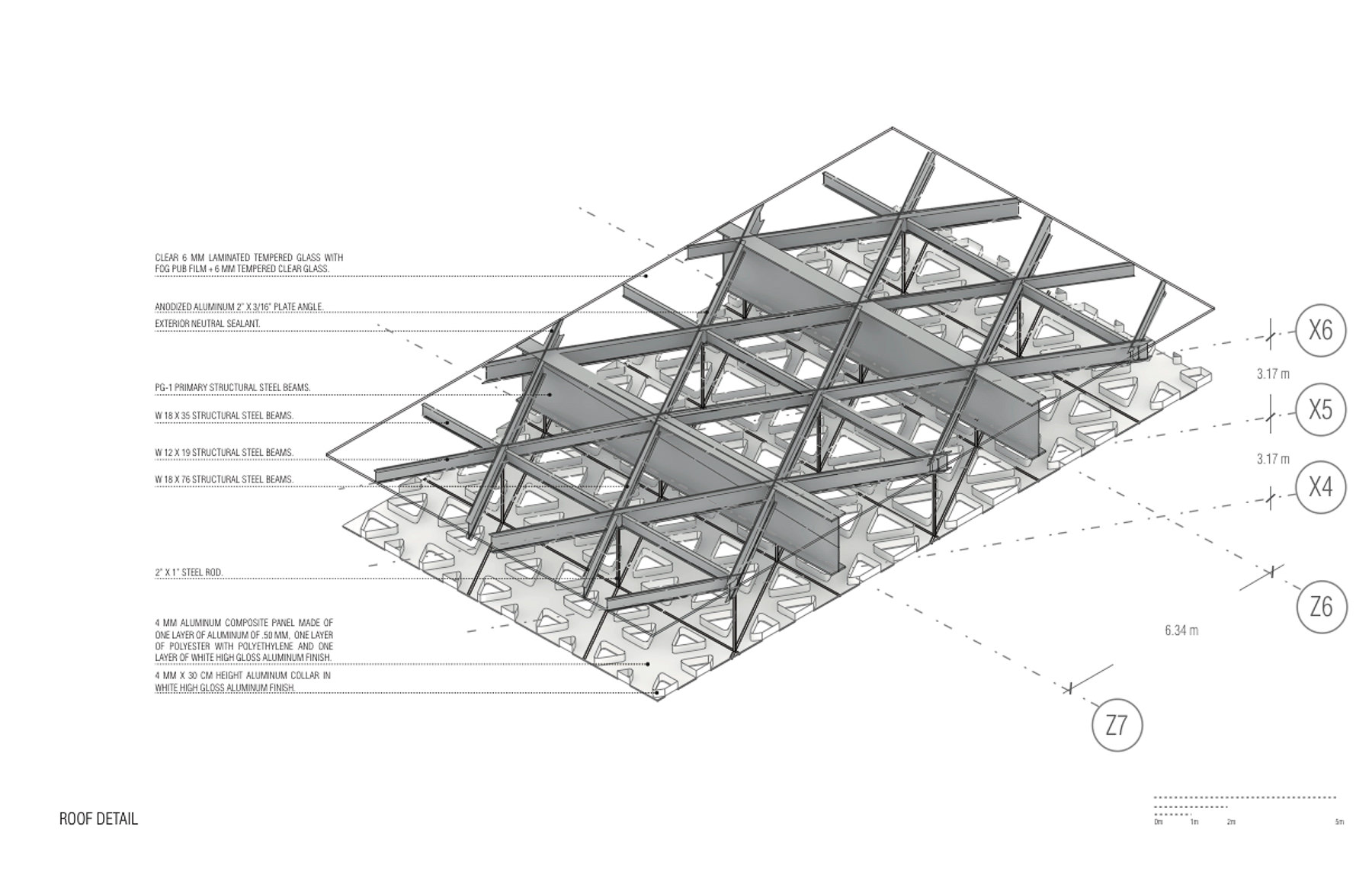 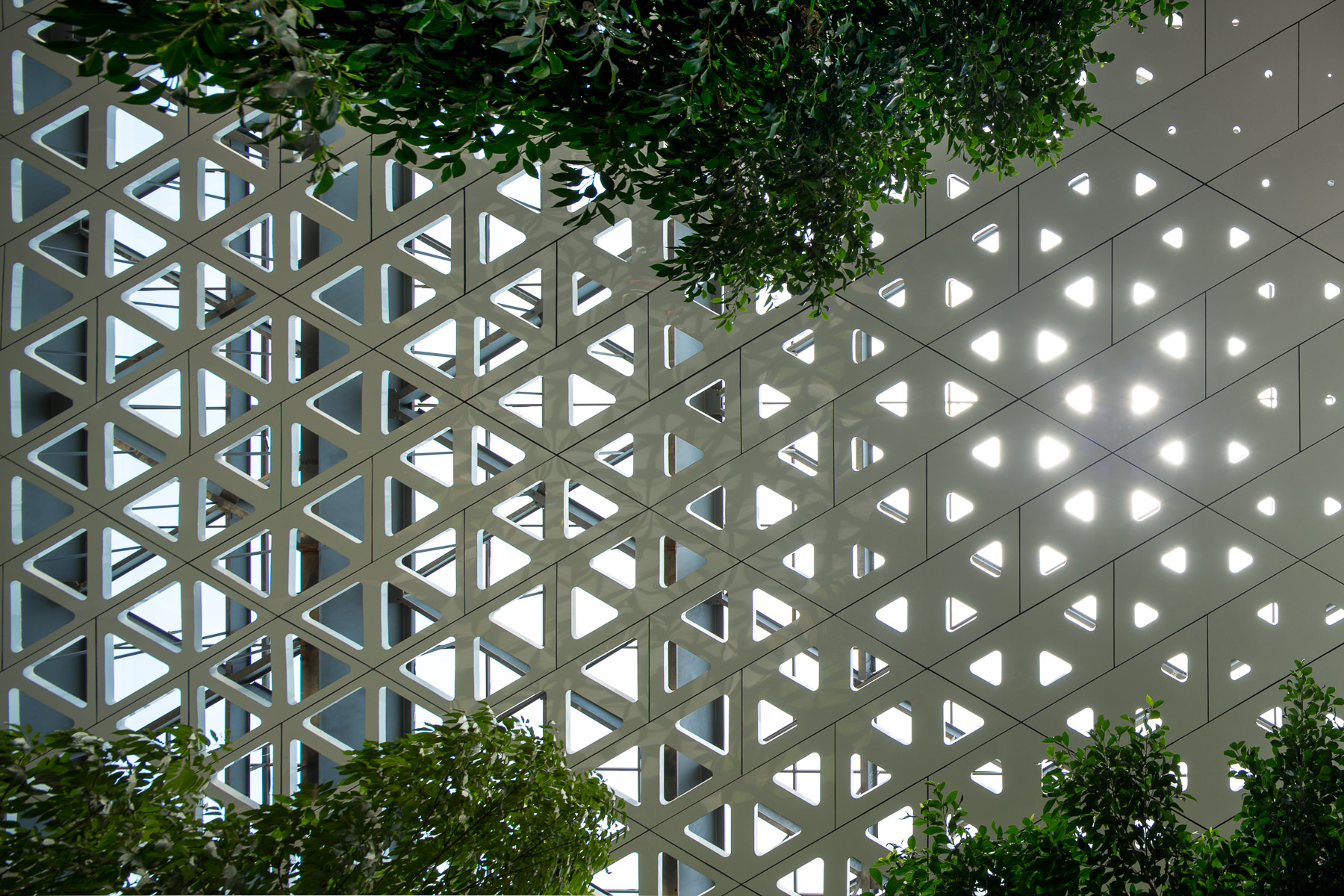 Boulder, Colorado based Studio NYL, a structural engineering firm, used a software program called Grasshopper to find ways to cut production time and costs in creating the structural pattern of the roof. “In the span of three days we were able to cycle through over 100 permutations and patterns with a steel tonnage variance of 25 percent. Done in a traditional manner this would have taken months,” says Chris O’Hara, engineer and founding principal of Studio NYL. 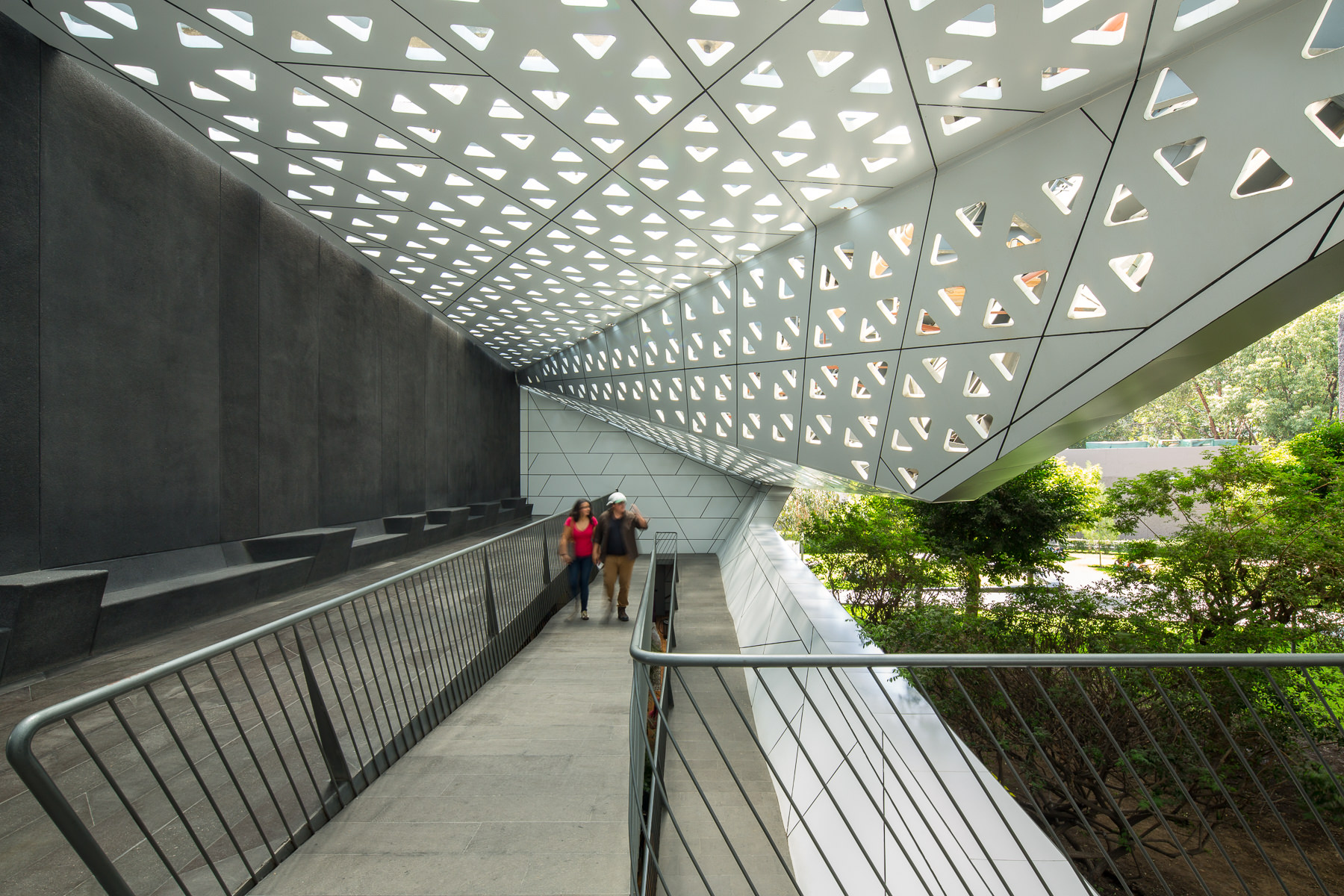 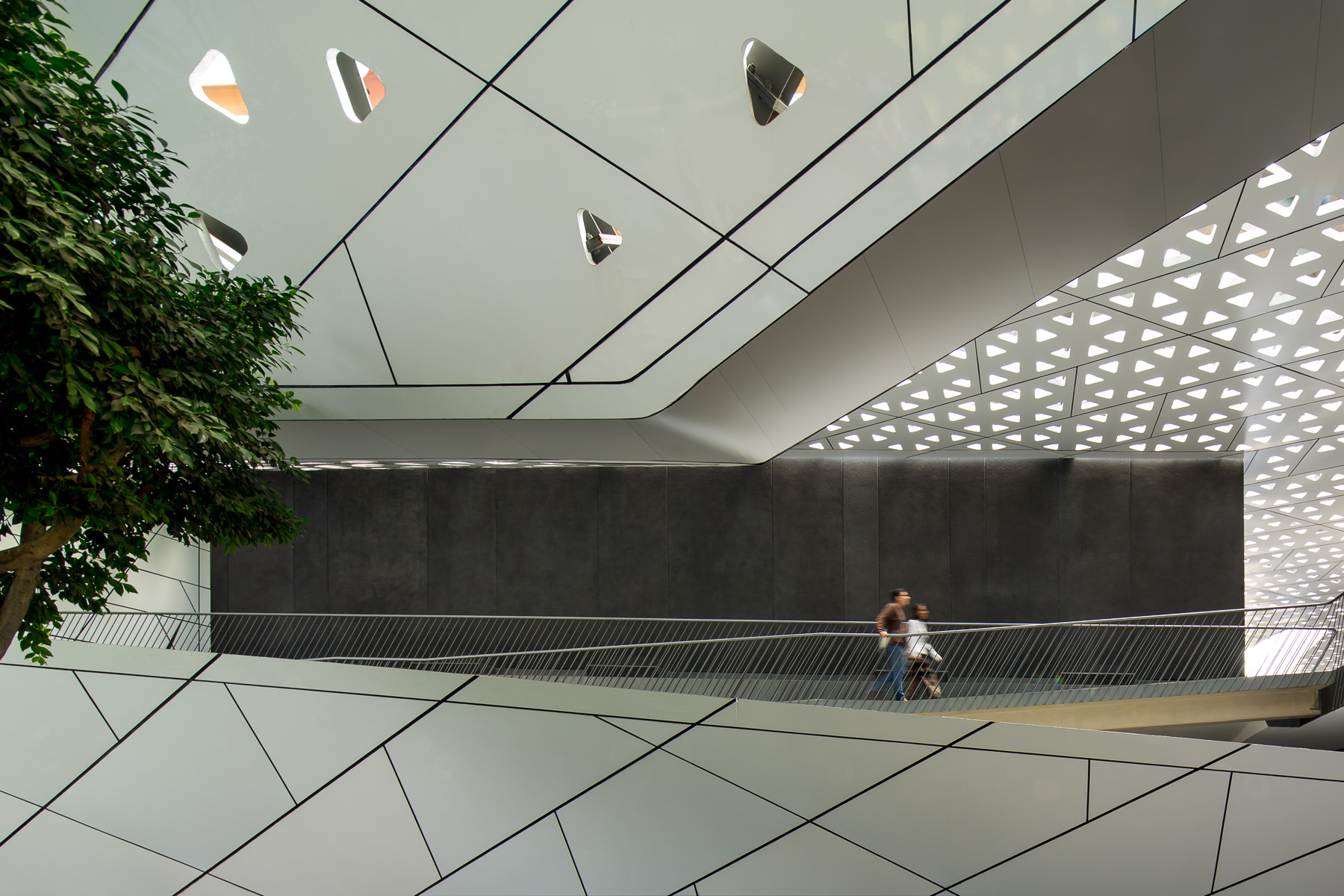 “The feature skylight is a bit of an illusion. What appears to be a complex series of triangular glass panels is created similar to how you would matte a photograph. Just as we can buy picture frames with oval cut outs for our children’s soccer photo, we can use the same trick with this facade. All the glass is actually rectangular and is made to appear triangular with the aluminum skin below it,” elaborates O’Hara.

Rojkind sums up: “The idea of an architect is not answering what the client wants, but always trying to pursue taking the project another step forward—on what it should be—and working with the client to achieve that.” 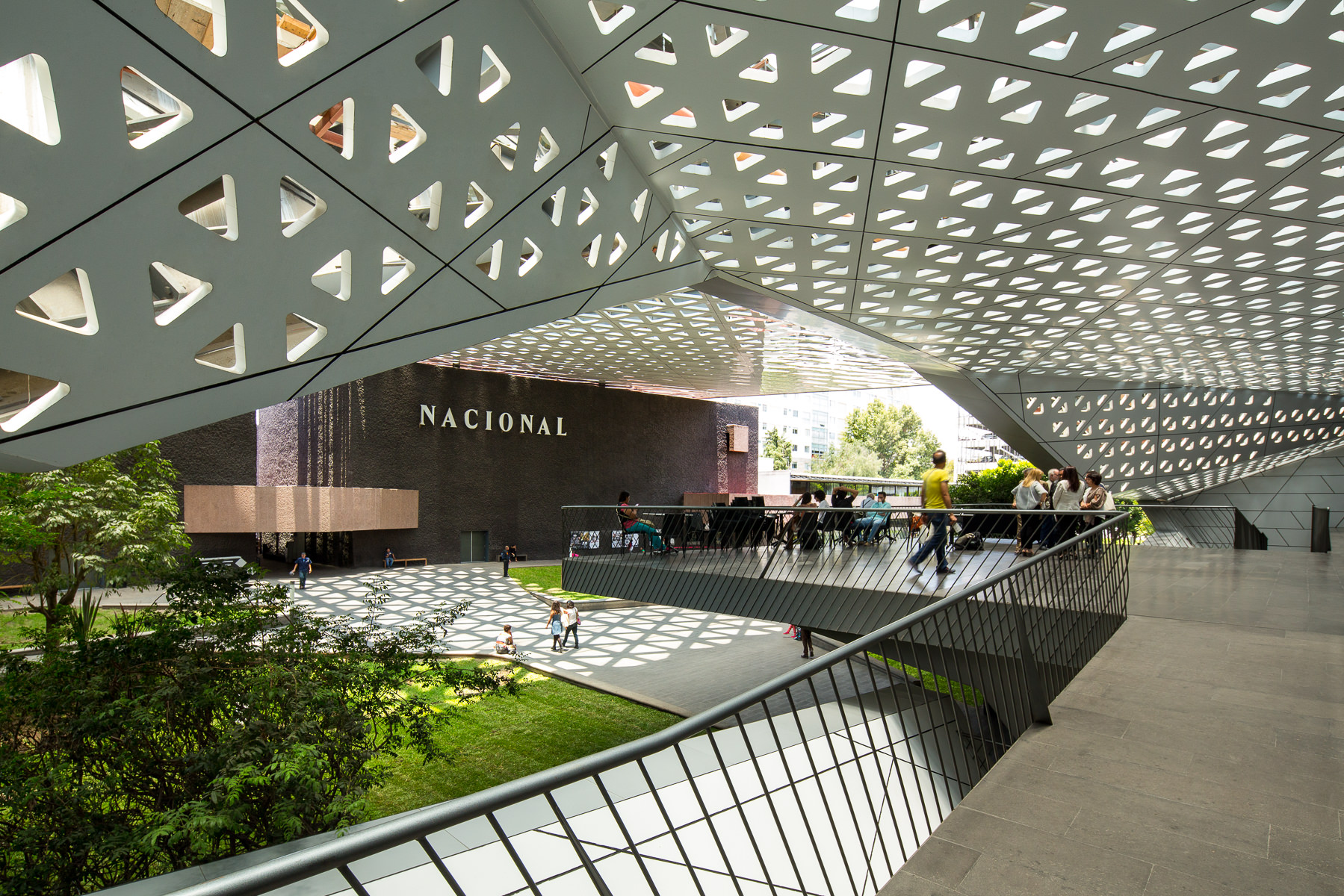 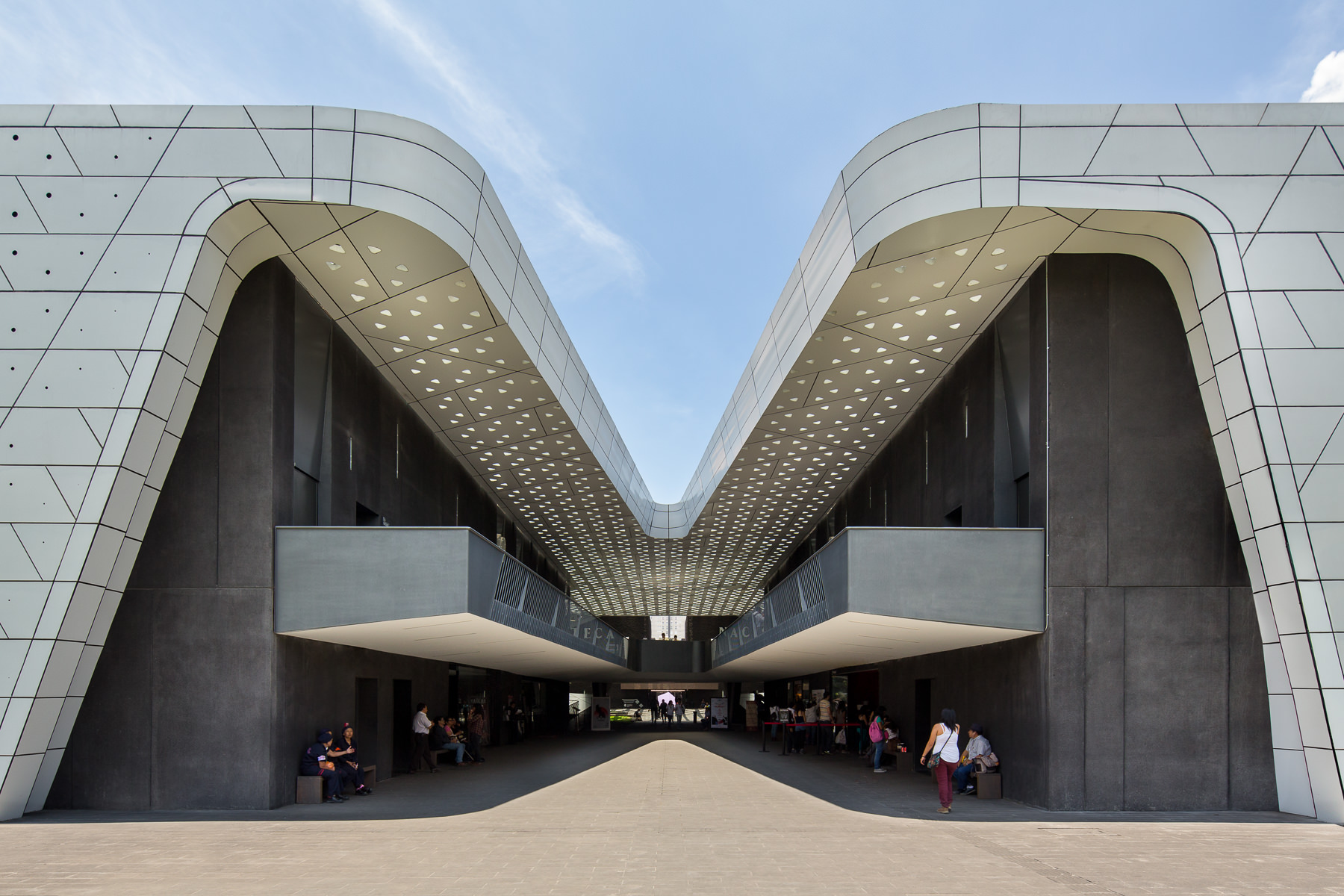