RNL’S INNOVATIVE DESIGN FOR HOGAN LOVELLS, NEAR UNION STATION, MAKES THE CASE FOR AN OPEN AND BRIGHT LAW SPACE. 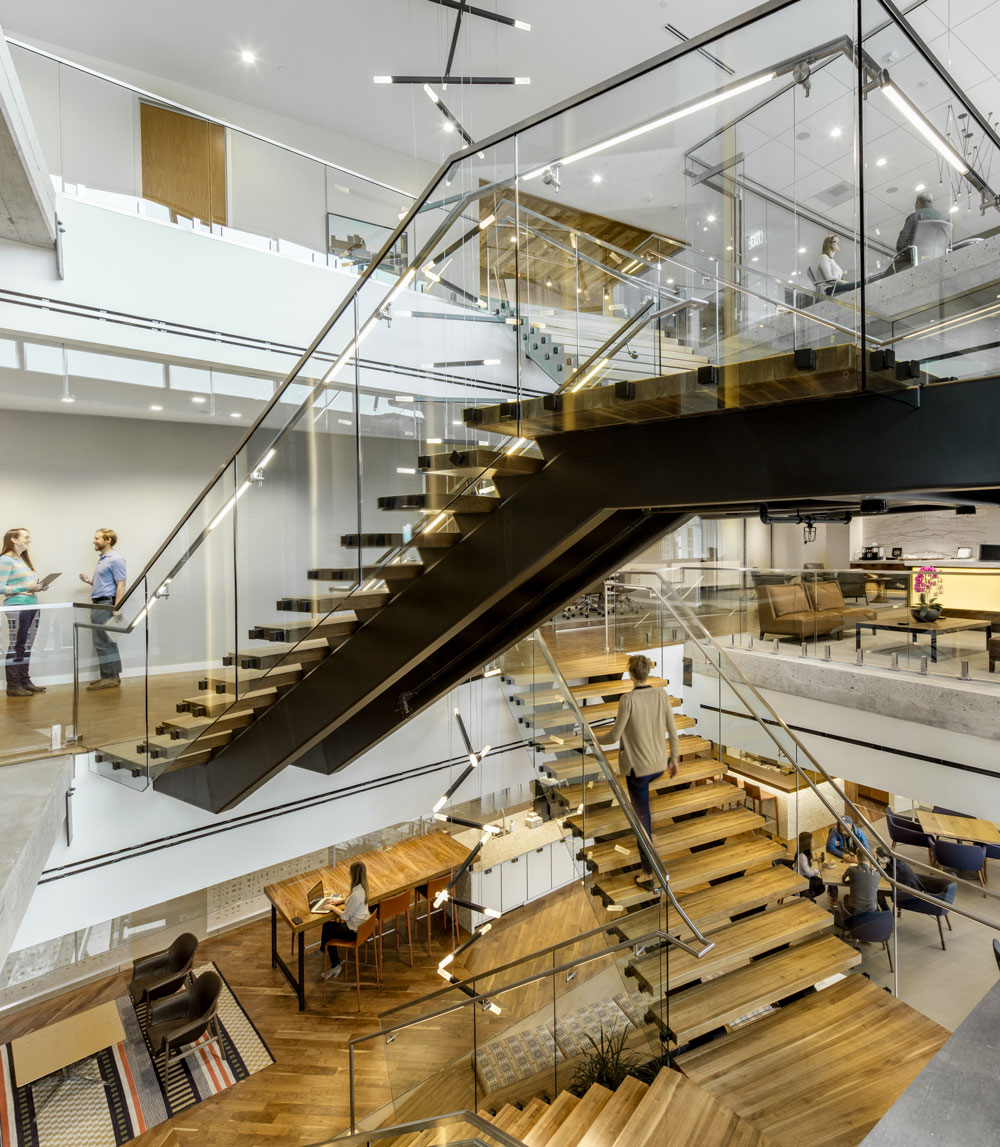 Rather than hiding the stairs in the interior, as most law firms do, Hogan Lovells opted for an open, central, floating staircase that spans the firm’s three floors and serves as the axis—both literally and socially—for the 70,000-square-foot offices.

“Not only are the stairs a dramatic feature,” says lawyer Craig Umbaugh, “but they have also proven to be a place that allows interaction among everyone working here—people often stop to have conversations on the stairs.”

The thick walnut open treads let in natural light from adjacent windows and are mounted to two metal stringers to resemble a railroad track from underneath, paying subtle homage to the nearby Union Station and embrace the concept of “Junction.” Inspired by a spark as it disperses into midair, a custom fixture manufactured by Contardi cascades down through the triangular opening in stairway, tapering as it descends.

This is definitely not your grandfather’s law firm. Step off the elevator into Hogan Lovells new offices at 16th and Wewatta, and here’s what you will not find: dark wood paneling; fusty, imposing corner offices; a mausoleum-like silence; standard eight-and-a-half-foot ceilings; and narrow “pass-and-go” break rooms connecting one hall to another.

What you will find: floor-to-ceiling glass windows overlooking 16th Street; a soaring, open central staircase abutting the windows and connecting all three floors; egalitarian private offices (each one measuring the same 165 square feet), with sit-to-stand desks and sleek custom sofas; a central gathering area with banquette seating, an espresso bar and a media wall of plasma TV screens; clean, warm materials balanced with exposed concrete and steel to reflect the surrounding downtown neighborhood and nearby Union Station. Altogether, it’s a fresh new take on office design with an inspiring concept.

In designing the 70,000 square-foot offices—which extends over two-and-a-half floors in a newly built curvilinear, LEED Gold-certified building—Denver architectural and interior design firm RNL Design talked at length with the Hogan Lovells lawyers and their support team to come up with their wish list. What the designers heard back where key words like “timeless,” “warm,” “hospitable,” “useful,” “impressive but not opulent,” “buzz,” and “LoDo Colorado vibe.” 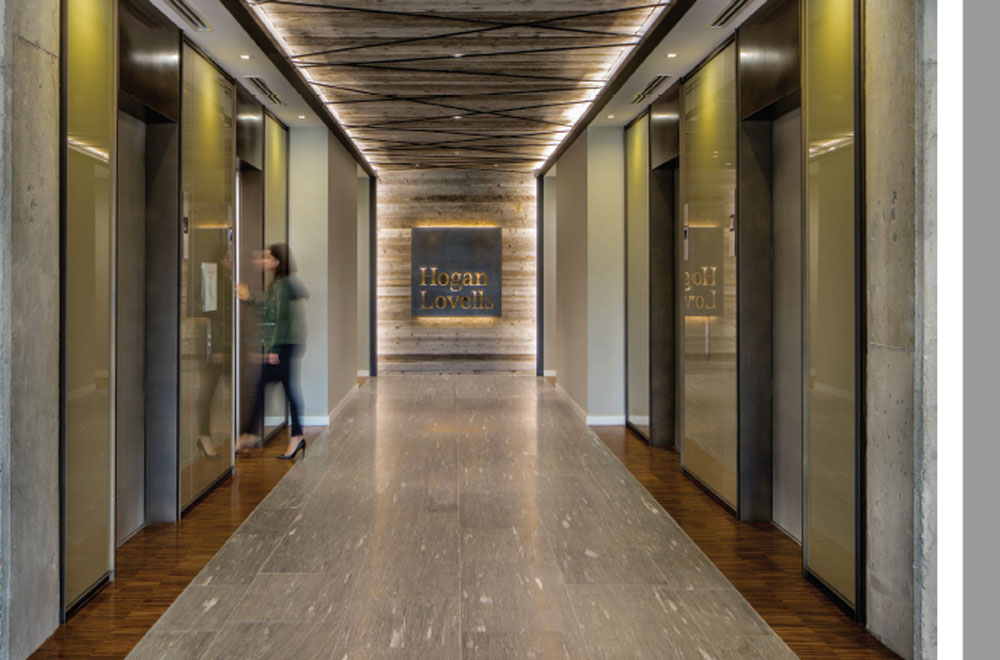 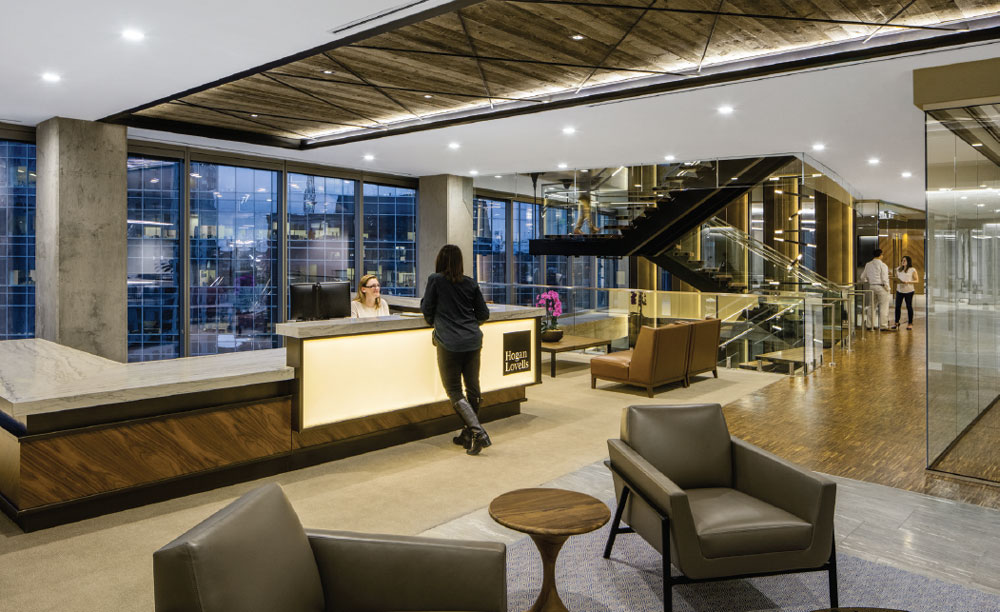 When clients disembark on the main floor (opposite page), they are greeted by exposed concrete columns and back-painted glass on the walls; the ceiling is made of reclaimed corral fencing and criss-crossed with metal ties, which give a nod to the nearby Millennium Bridge. The floors are made of end-grain wood and stone. The open reception area (above) has a backdrop of floor-to-ceiling windows with city views, as well as two seating areas. The oversized reception desk, with its bias-cut wood-grain front, can double as a serving space for receptions or events.

“We wanted a space that encouraged and facilitated collaboration, wellness and health,” says Craig Umbaugh, a Hogan Lovells partner. “We also asked RNL to continually challenge us during the design process and not allow us to default on the key design elements or to look like other offices.”

Says Sarah McGarry, senior associate at RNL: “the goal was to make the space feel energetic, open, bright and multifunctional so it would suit a variety of uses, including entertaining. I don’t think most law firms would have been as progressive as they were.”

They wanted the space to reflect the company and the core values at a local level. “This also gave us a great opportunity to embrace the energy of the neighborhood and develop a strong concept that can be seen and felt throughout the design,” adds Sarah Barker, RNL interior designer. “We introduced this concept within every element of the design, from the initial floor plan layout, to the cut of the slab and intersecting walls, to the finishes and architectural lighting elements—we wanted to embrace the concept of junction: a space in which two or more routes converge.”

This intent comes through loud and clear in the central staircase, which defies many office design norms, not the least of which, the fact that it is situated next to floor-to-ceiling windows which, in many law firms, would be considered the most valuable real estate around. A massive floating structure made of walnut wood treads suspended with steel supports, it serves as the axis of the entire space and abuts a unique central gathering area, dubbed “The Junction” in homage to the concept and nearby transit hub. 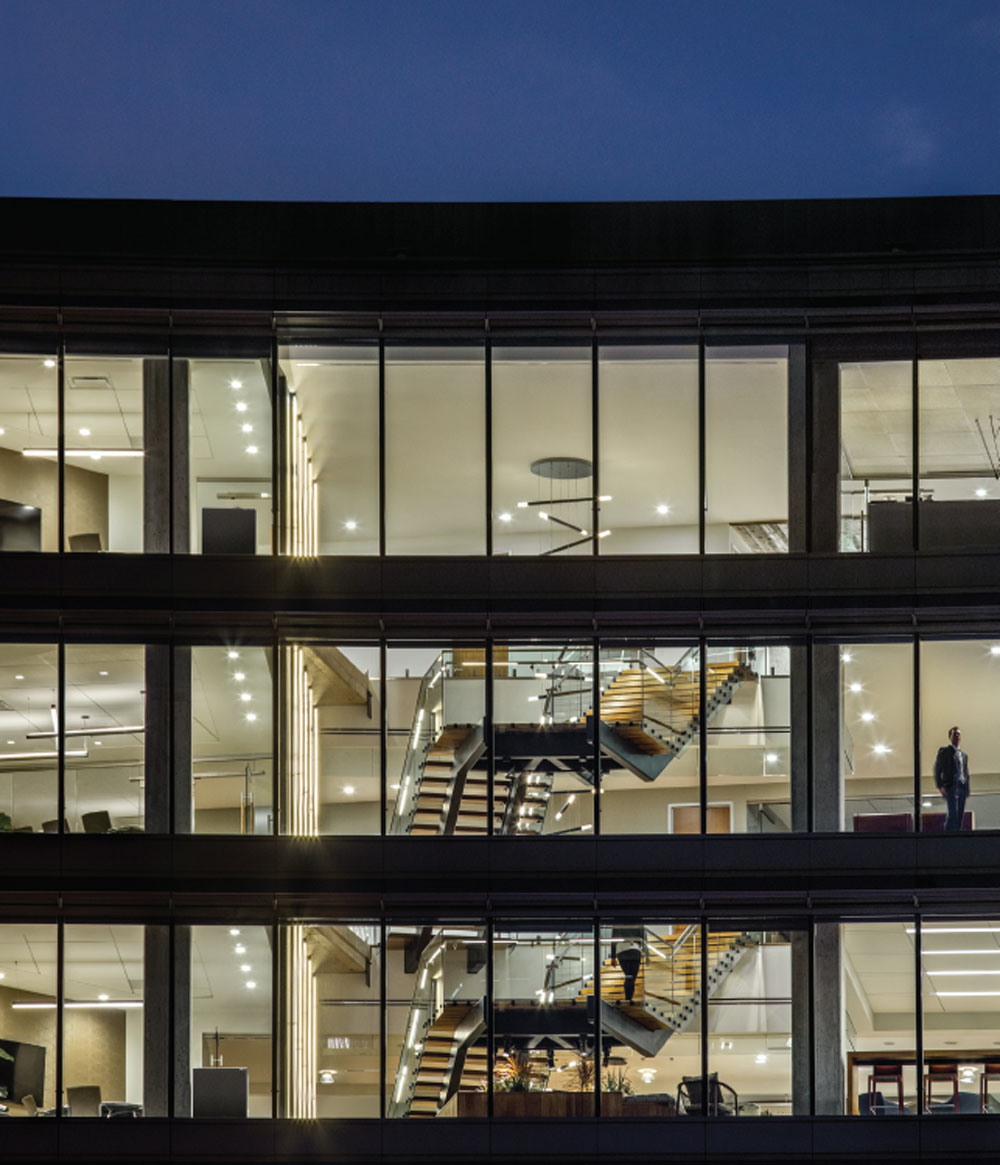 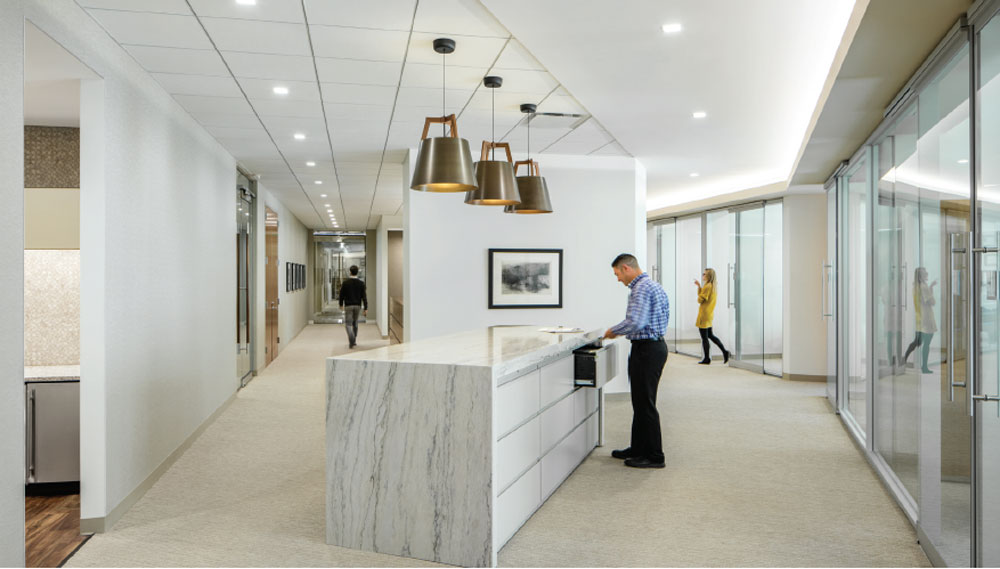 Believing that the exterior views of the office were just as important as the interior ones, the designers from RNL made sure the central staircase (opposite page) looked like a piece of lighted sculpture to pedestrians passing by below, particularly at night. To promote egalitarianism, private lawyer offices (above) are all the same size (165 square feet), a rarity for Denver law firms. Corner offices are reserved for meeting spaces and visiting attorneys. The marble-wrapped file bar provides an area where attorneys can have impromptu meetings and hold any overflow files from their offices; the three bronze pendant lamps are from Allied Maker.

“The staircase was strategically positioned to drive people up and down the space,” says McGarry, “but ultimately land them in The Junction so it could become a major activity center for the whole office. It was quite a battle to get everyone on board with the staircase, but Hogan Lovells couldn’t be happier with the result.”

“The stair really does tie the whole concept together,” explains Barker, “the opening forms a junction between the structural concrete beams and the radius of the building’s facade. The three-story metal wall feature intersects the perpendicular lines of the building, emphasizing the intersection of the wall with these beams. Therefore, one single strip continues up the three stories while the additional strips remain visually broken by the buildings structure.”

“This is an affect that we hoped could be especially prevalent from the view outside,” adds Barker. The light grazed panels, lit handrails and three story pendant light offer a variety of interest and glow from the space that can be seen from afar and can capture the attention of people walking along the mall. “We were trying to affect Denver’s architectural landscape from the interior.”

Adds McGarry: “And that staircase was one great way to do it. It makes the entire reception area feel that much more active and exciting. If it were your typical reception area, it might be closed off, but Hogan Lovells didn’t want visitors to come in, not see people and not hear anything—they didn’t want the space to feel like a library. Now visitors get a feeling of energy and buzz by seeing people circulating in the space.” 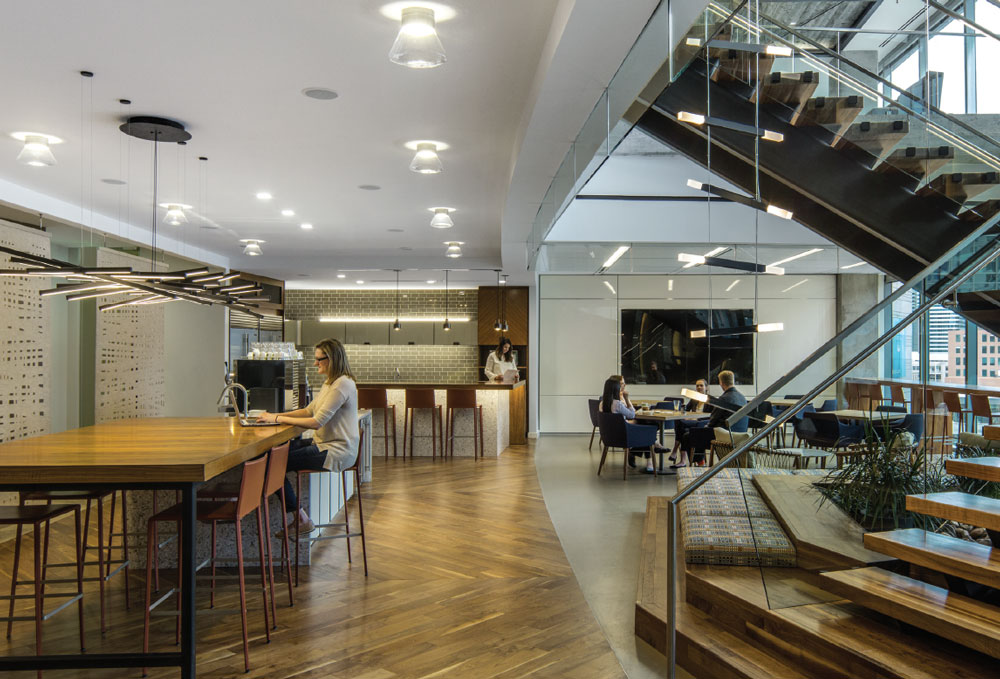 At the base of the stair, RNL created a social space dubbed “The Junction,” which features one of the office’s kitchen areas and has soft seating, a shuffle board, an espresso bar, a plasma-screen TV wall, and a platform with felt rocks and plants.

The conference rooms adjacent to the reception area are all exposed with glass partitions, but special attention was given to allow visual and audible privacy when necessary. “The metal panels create a privacy barrier between the stair and conference rooms, and they are specifically spaced to provide an engaging experience as one moves throughout the levels as people are able to see a hint of activity beyond —as if seeing between box cars of a moving train,” adds Barker. “It is quite an experience for both people on the staircase and within the conference room, but may be subtle or initially unnoticed. Initially people think this may be distracting for people in a meeting, but we are hoping it keeps people more alert and engaged since the visual connection between people is very limited—not long enough to make eye contact.”

Similarly, each of the private offices has glass fronts with sliding doors. “We talked a lot about that with the firm—would that be too transparent for them?” says McGarry. “But they ultimately decided not to have etched or frosted glass, and everyone’s decided they really appreciate the light coming through.”

Another goal of both Hogan Lovells and RNL was to capture the energy of the neighborhood throughout the space. During the initial planning stages, the RNL team walked around the surrounding streets to absorb the vibe. The resulting symbiosis can be seen in a number of ways, starting with intersecting metal bars in the entryway that imitate the nearby cross-sections of the Millennium Bridge. Triangular angles within the stairs mimic the Triangle Building catty-cornered across 16th Street. Reclaimed wood corral fencing [from Pioneer Millworks] is used in several ceilings and extends down the wall and into the elevator lobby to imitate railroad ties framed by a blackened steel channel. Marble walls and countertops and mosaic tile patterns tie in with the historic elements of Union Station.

The material palette truly reflects the surrounding area. “There are tons of contemporary buildings going up in the neighborhood, but it also has this deep, rich history, including Union Station, where a lot of historical preservation has been done, as well as some of the other old buildings in LoDo, which are warehouse-y,” says McGarry. “So we tried to meld all of that together. In the finished palette, we have a lot of clean, sophisticated materials like glass, juxtaposed next to something that is older or rawer, like bronze or exposed concrete.” Warmth was added not only through the use of wood but through suspended felt panels used as space dividers. Also, a platform of 8,000 felt rocks underneath the staircase on the main floor, was put there not only for aesthetics but acoustics as well (the rocks absorb sound). 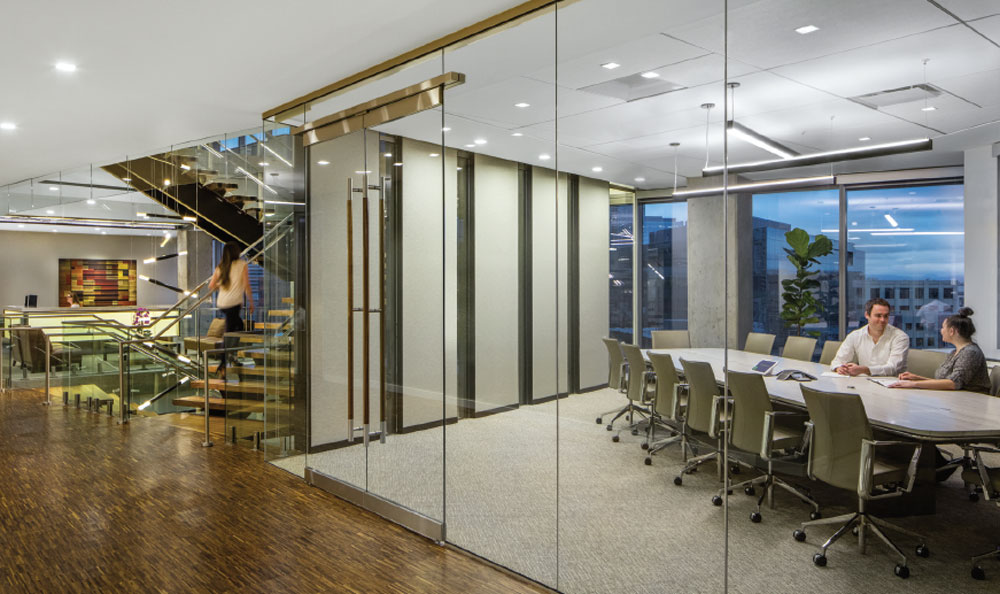 A Vibia Rhythm light hangs over a long wooden table perfect for dining or casual meetings. An adjacent conference room is one of several throughout the firm.

Though RNL worked to capture the feeling of the neighborhood, the designers also wanted to give the firm a global feel, to convey the breadth of its clientele. One place that was achieved was in the firm’s new conference center/training center, an ultra-flexible space that can accommodate enormous presentations with every lawyer in the firm but can also be reconfigured (through the clever use of features like internal NanaWalls) into smaller conference rooms.

“It’s sort of an intangible,” says McGarry, “but when you walk in, the whole space has the feeling of an international law firm. It fits into the national and international portfolio of Hogan Lovells and yet it doesn’t look like their D.C. or L.A. offices. It’s unique to Denver.”

Says Umbaugh: “We’re fortunate that we get not only views of the gorgeous Colorado mountains but also great views of downtown Denver and everything that is happening in the Union Station area. Our clients and colleagues have universally loved the new office. The openness of the space has fostered a new energy and excitement in the office that spills over to our interactions with our clients and each other.”