SWEEPING CURVES AND GEOMETRIC LINES HAVE WEAVED INTO THE NATURAL CONFINES OF THE DENVER BOTANIC GARDENS AS A SELECTION OF LEGENDARY ARTIST ALEXANDER CALDER’S ICONIC WORKS HAVE COME TO VISIT. 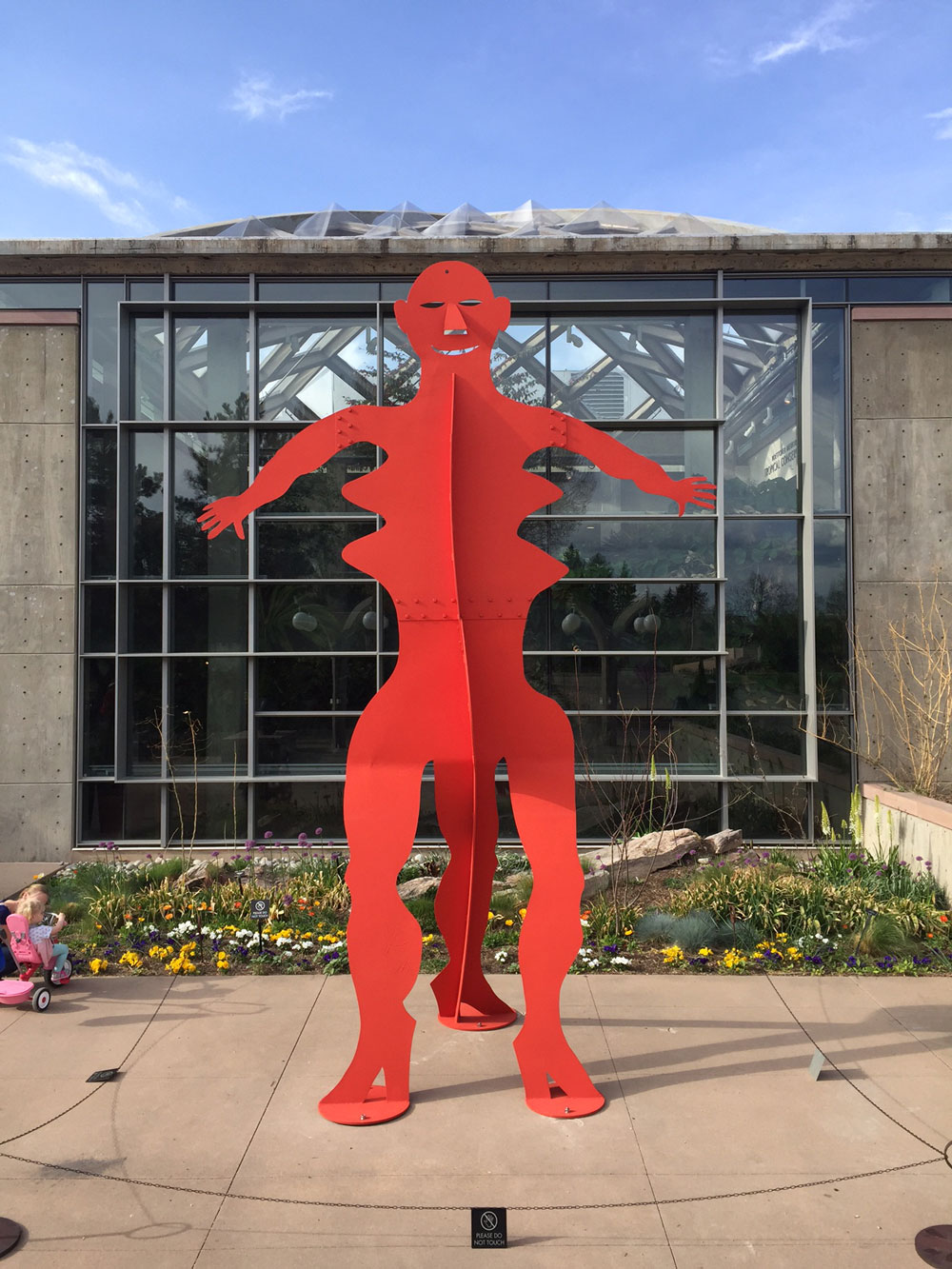 Towering shapes of steel will take up residence among the lush greenery and scenic waterways of the Denver Botanic Gardens this summer when it hosts a survey of iconic American artist Alexander Calder’s monumental sculptures. Opening April 28th and running through September 24, 2017, Calder: Monumental will offer guests a rare opportunity to experience so many of Calder’s outdoor works at a single venue. This is also the first outdoor show for Calder’s works in the west and the first solo outdoor exhibition in the United States in more than a decade.

Perhaps best known as the originator of the mobile, Alexander “Sandy” Calder (1898 – 1976) was also a visionary in the realm of large-scale stationary sculptures called stabiles. These were uniquely crafted works of steel boldly painted, often monumental in scope (and not recommended for hanging over baby’s crib).

“Above all, art should be fun,” Calder once famously noted. And in viewing his work, whether in his mobiles, stabiles or notably his wire sculptures of circus figures, you will notice an almost childlike sensibility within his his innovative, expert execution. Adding to this, Calder’s palate consists of primary colors, with its base in black and white. He used other color as a means of contrast often adding in red as it most starkly contrasted the black or white. 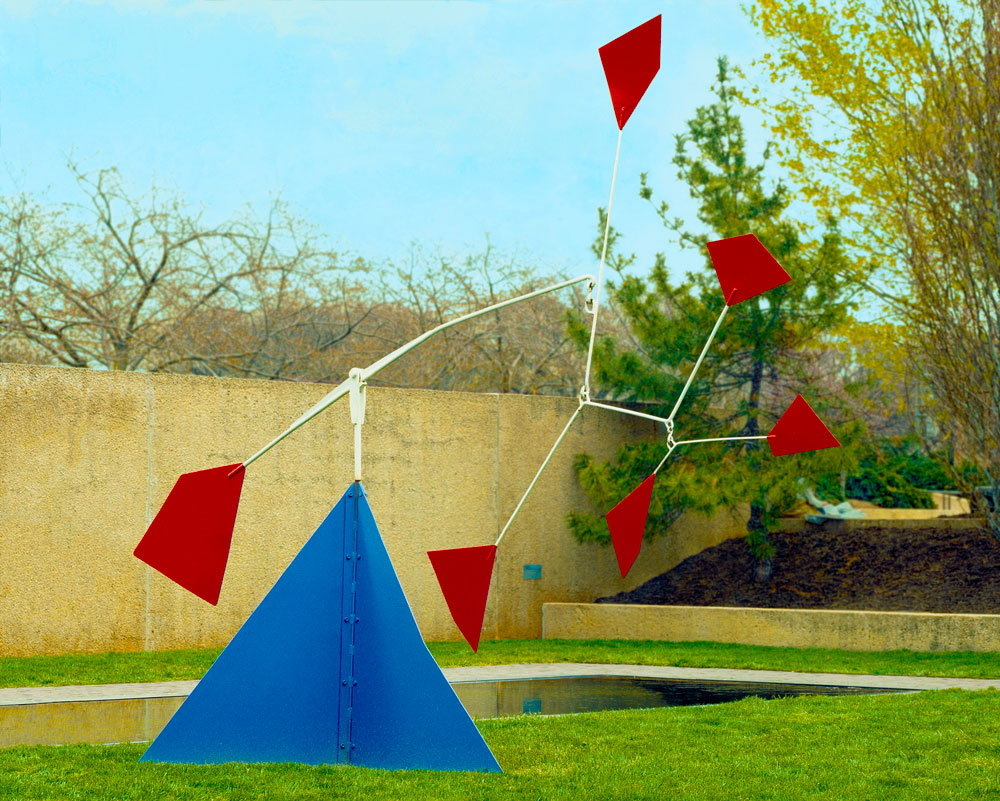 He was the first artist to be widely commissioned to make public art, having been favored by architects including Mies Van de Rohe, Wallace K. Harrison and Frank Lloyd Wright. His sculpture in Grand Rapids, Michigan, La Grande Vitesse, was the first public artwork to be funded by the National Endowment for the Arts.

Over the course of his lifetime, Calder completed major commissions not only in the United States, but also in Canada, Mexico, Brazil, France, Belgium, Italy, Germany, Denmark, Lebanon, Saudi Arabia, India, and Australia among others. Calder was the first truly international artist. During the 1930s, he left America for Paris where he flourished in a highly creative environment along with contemporaries like Picasso and Chagall.

As Calder’s grandson Alexander S. C. Rower observes, “my grandfather’s monumental sculpture is celebrated for many reasons, but perhaps its greatest success is its ability to convey a sense of tangible movement and aliveness despite physical stasis. Whether installed against buildings or in more natural environments, his work never fails to animate the surrounding space, drastically impacting our experience of it.” 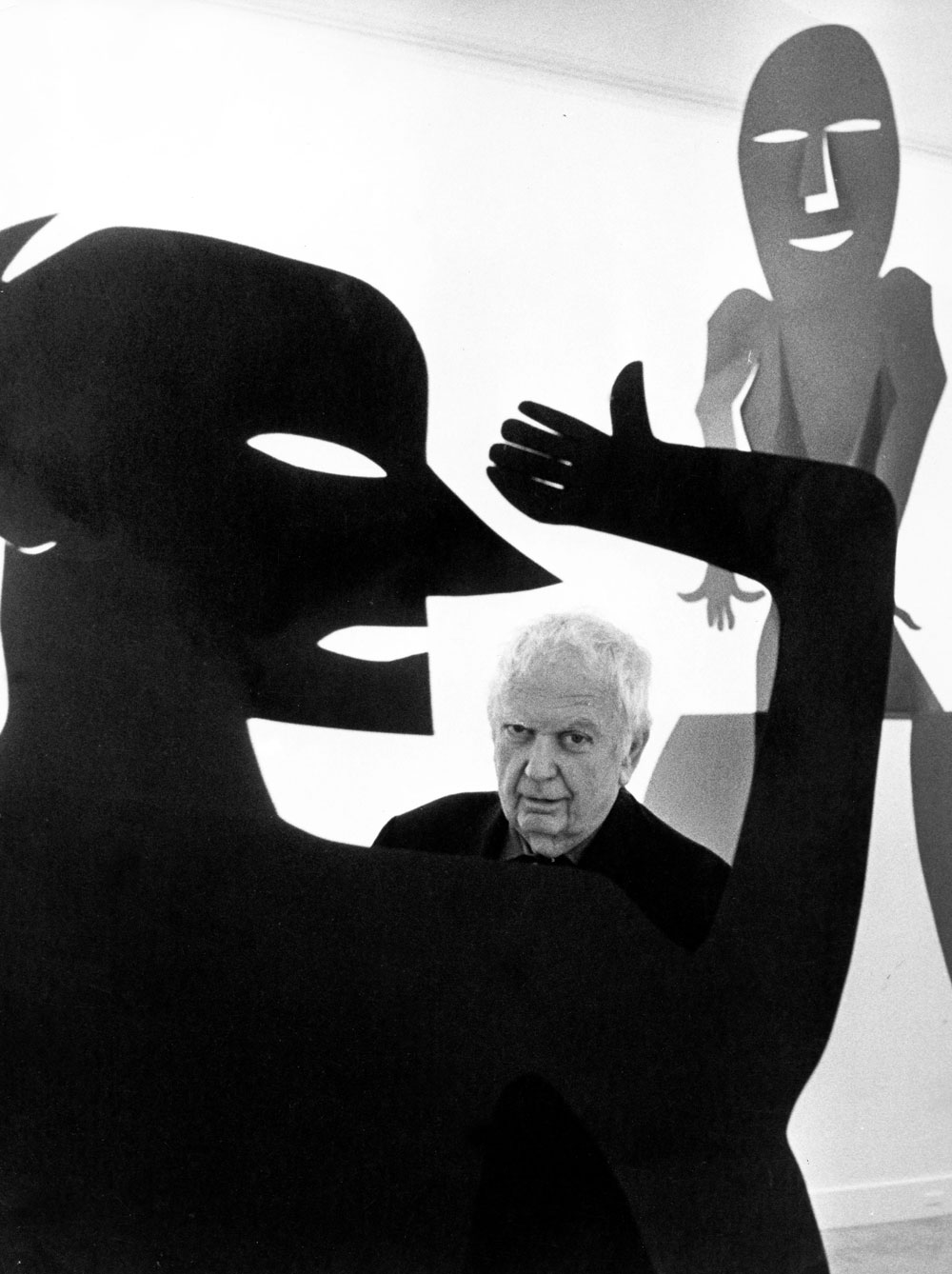 Calder once stated: “My fan mail is enormous. Everyone is under six.”

Appealing to all ages, Calder’s sculptures have the power to energize a space and captivate viewers through bold lines, monumental size and in some cases movement. This made his work a natural choice for exhibition at the Gardens, which hosts regular summertime art exhibitions – providing a fresh experience of the gardens each year.

“We have an opportunity in a really natural environment to acquaint people with art and design principles who might not necessarily be the kind of individual who would elect to enter a more traditional indoor museum or gallery space,” Lisa Eldred, director of exhibitions, art and interpretation at Denver Botanic Gardens explains.

With this goal in mind, Eldred and guest curator Alfred Pacquement, honorary director of the Musée National d’Art Moderne at the Centre Pompidou in Paris, worked closely with the Calder Foundation to present a collection of pieces that illustrate key aspects of Calder’s body of work including his innovative mobiles, standing mobiles and stationary sculptures known as stabiles. 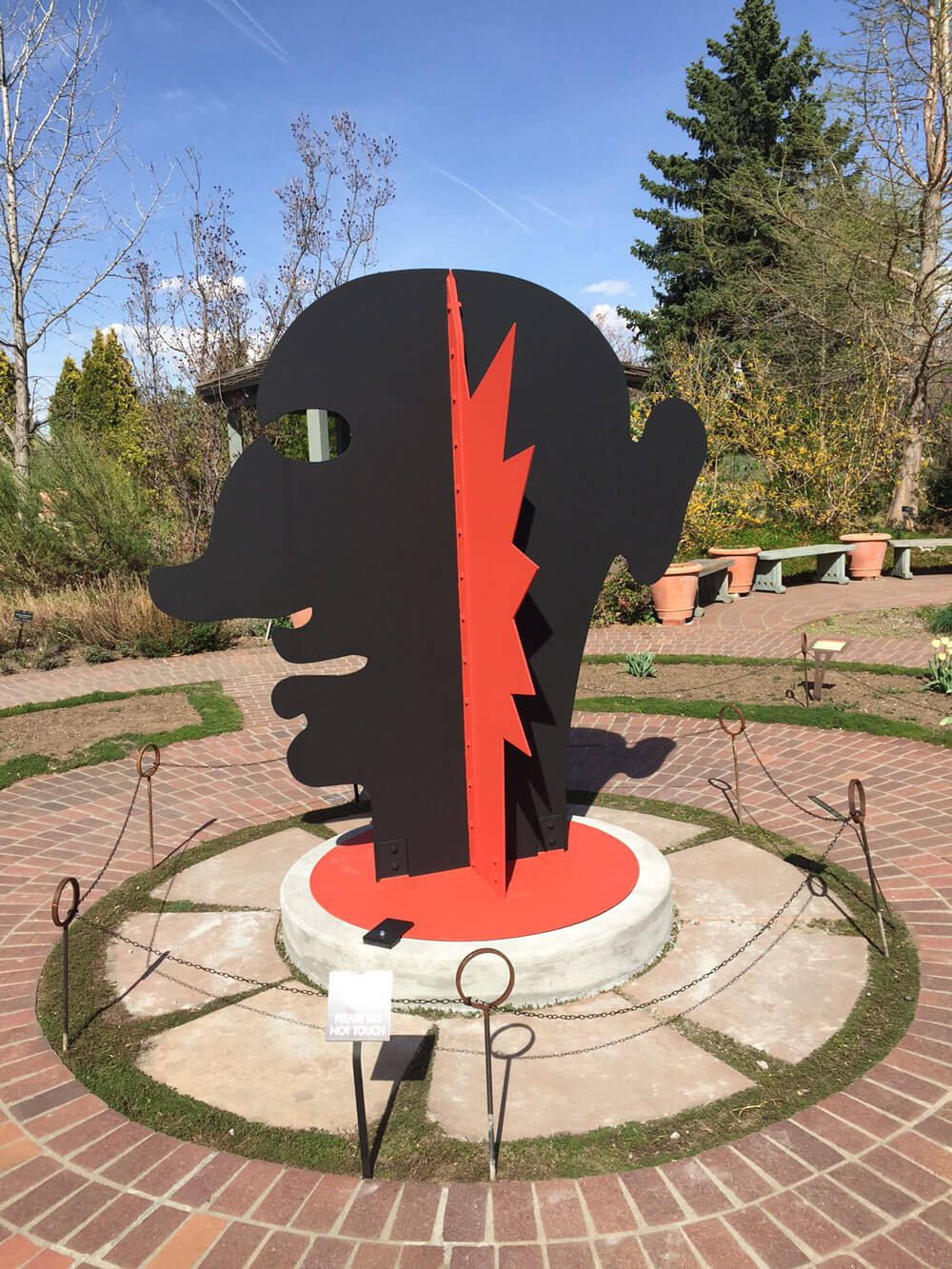 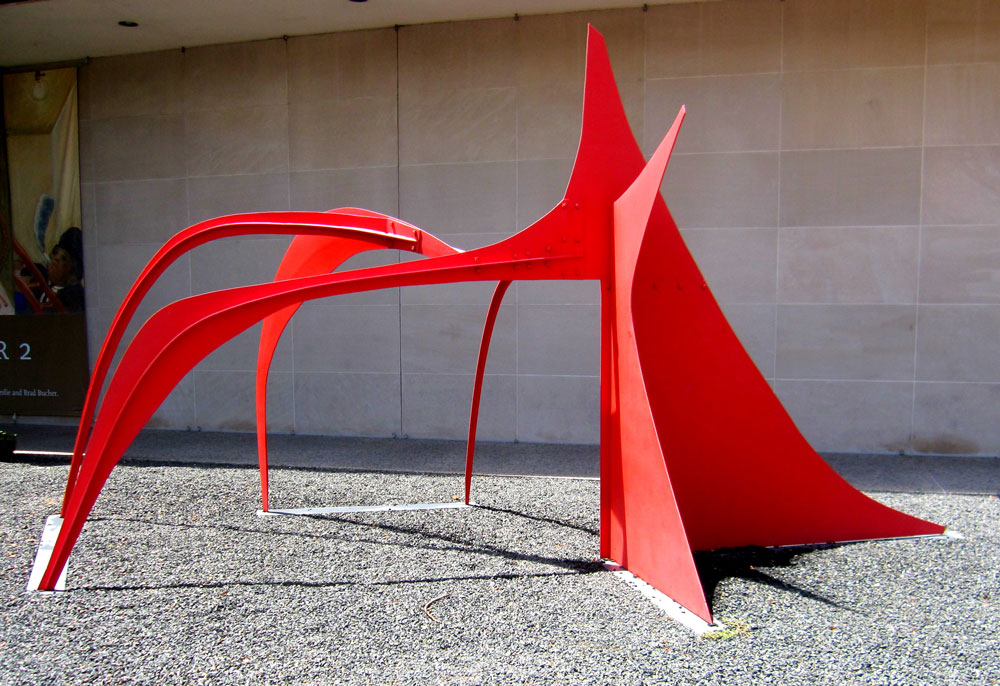 “The Crab” 1962, painted steel, 120 x 240 x 120 in. Museum of Fine Arts, Houston. Mischievously menacing, “The Crab” through still, looks like it could come crawling to chase onlookers down. It is yet another example of Calder’s sly humor shining through his art.

The works featured in the exhibition span the last twenty years of Calder’s life and career, a time when most of his focus was on commissions for monumental sculpture. You’ll be able to see many that are already quite well known. 6 Dots Over a Mountain (1956) has been a longtime fixture outside the Hirshhorn’s futuristic building on D.C.’s Mall; Five Rudders (1964), from the Mildred Lane Kemper Museum, was included in Calder’s historic 1964 retrospective at the Guggenheim in New York; and The Crab (1962), purchased by the Museum of Fine Arts in Houston in 1962, was part of the Whitney’s Calder’s Universe show in 1976.

Pushing the boundaries of material and composition, Calder created works destined to be in dialogue with nearby structures and landscapes, as well as in a state of constant change due to the passage of time, the presence of a breeze or the shifting angles of the sun.

Calder: Monumental at Denver Botanic Gardens provides a unique opportunity to experience Calder’s pioneering work and deepen one’s understanding of the powerful way art influences our perceptions of space and time. The exhibit runs through Sept. 24, 2017.