GRADY HUFF LAUGHS WHEN HE LOOKS BACK ON HIS FIRST INTERNSHIP FOR A RESIDENTIAL ARCHITECTURE FIRM IN ASPEN 20 YEARS AGO–SHOWING UP AT A JOB SITE TO CRAFT DETAILED MODELS WITH LITTLE MORE THAN FOAM CORE AND X-ACTO BLADES. 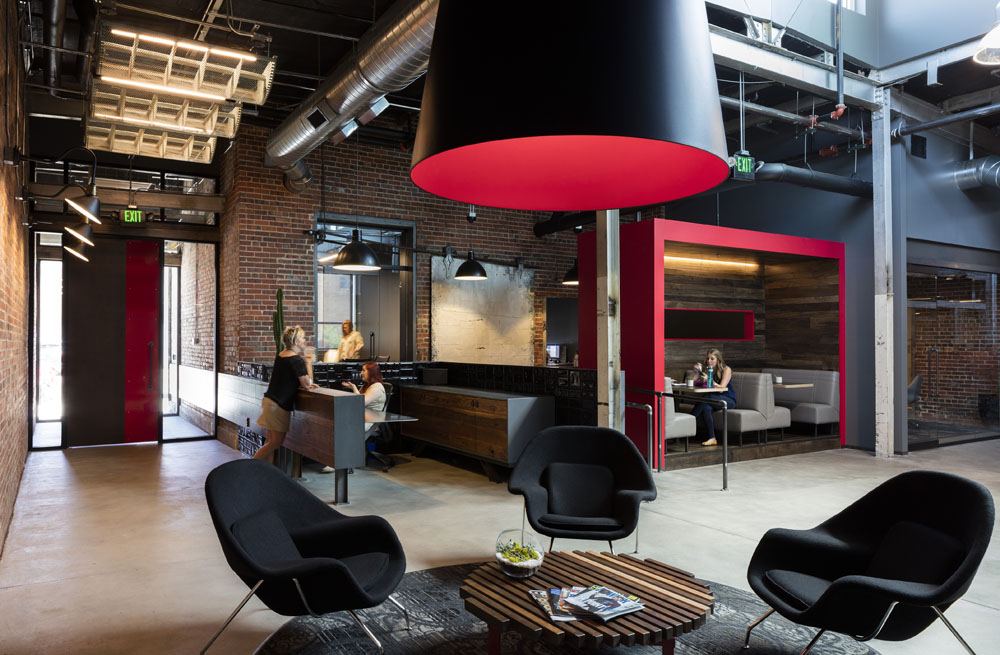 But those jobs helped prepare him for 12 years at Boulder’s Communication Arts, the well-known architectural and design firm that sent him all over the planet to work on shopping centers and environmental graphics.

Shortly before CommArts was acquired by Stantec, Huff saw the writing on the wall, and decided to launch his own firm, Studio Lemonade, in 2009. He quickly went from working on million-dollar job sites in Tokyo and Abu Dhabi to splitting his time between the barn on his Boulder property and the front seat of his car. His first project? Furniture and fixtures for Denver’s Spire Condominiums. But that’s all changed.

In the last few years, Huff and his small team of six have worked on eye-popping designs at 30 locations for Bowlero and Bowlmor as well as the first incarnations of Punch Bowl Social, which launched the popular franchise and most recently the brand-new Sloans Lake location for the ultra-hip Alamo Drafthouse Cinema chain. Lemonade has also devised unique spaces for Motive Creative Studio in RiNo, Cholon Asian Bistro on 16th Street, and single-family and multi-family housing all over the Front Range. 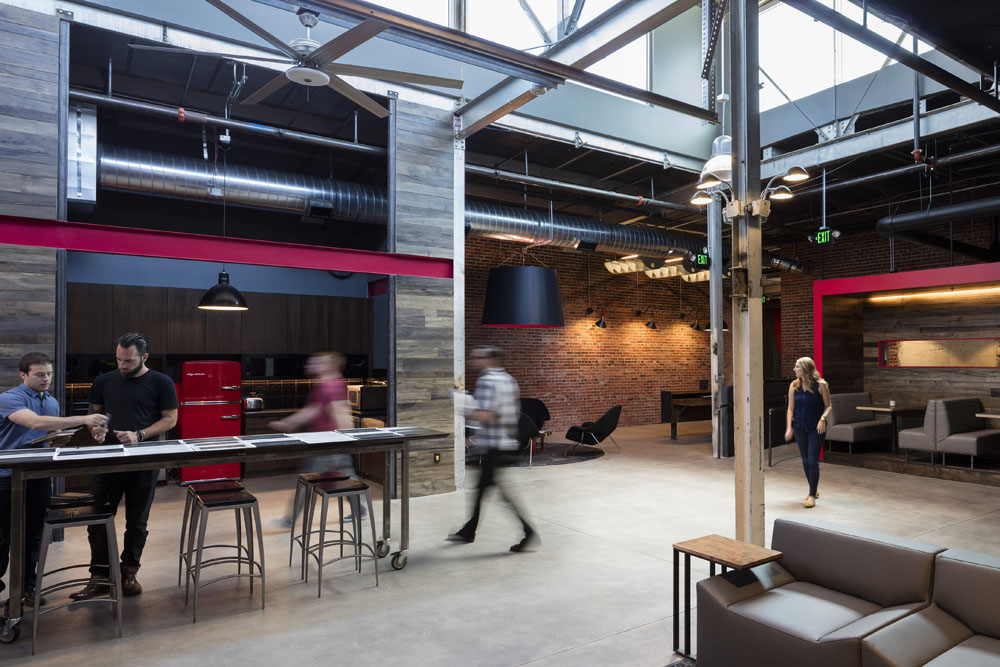 As you page through Lemonade’s portfolio, one word immediately comes to mind: Layers.

“Layers add depth to a space,” says Huff. “And that feeling can be produced with materials, finishes, the way you plan the space, and even in lighting.” Huff’s goal is to create spaces that people will want to visit again and again, without ever getting bored. “At a place like Punch Bowl, people have a real need to show others where they are, by taking photos and posting them on social media,” says Huff. “By doing something unusual with the physical space and designing vibrant explosions of color, we’re creating a mood that really helps tell a story.”

Although Punch Bowl’s offerings of games, drinks, and food could have placed it in the same realm as Dave & Busters, Studio Lemonade elevated the brand with sophisticated artwork, subtle lighting, and lounge seating that cleverly whispers “country club” rather than screaming “arcade.” 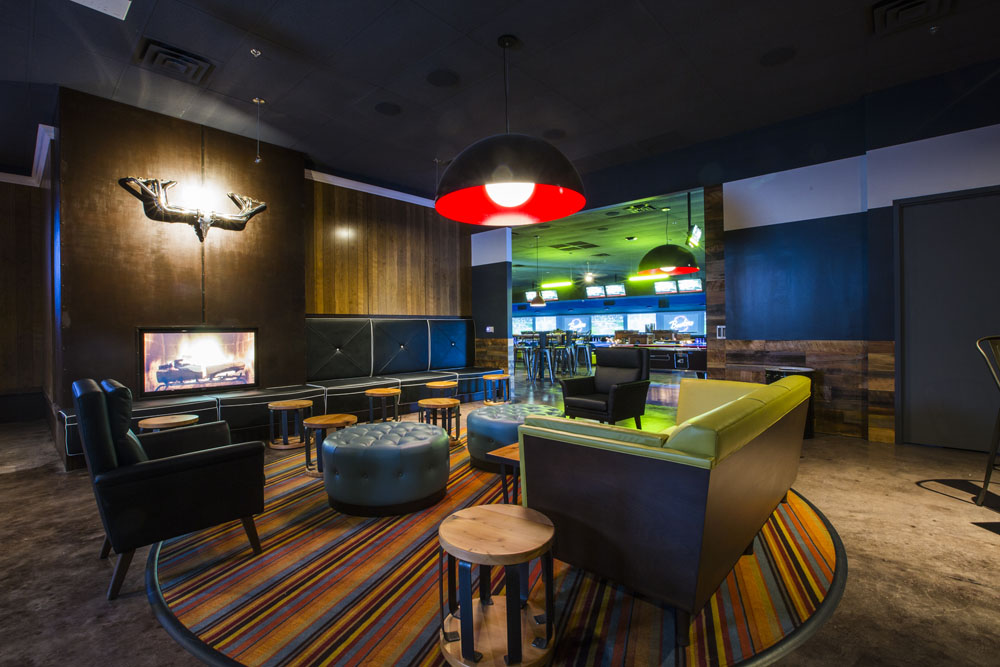 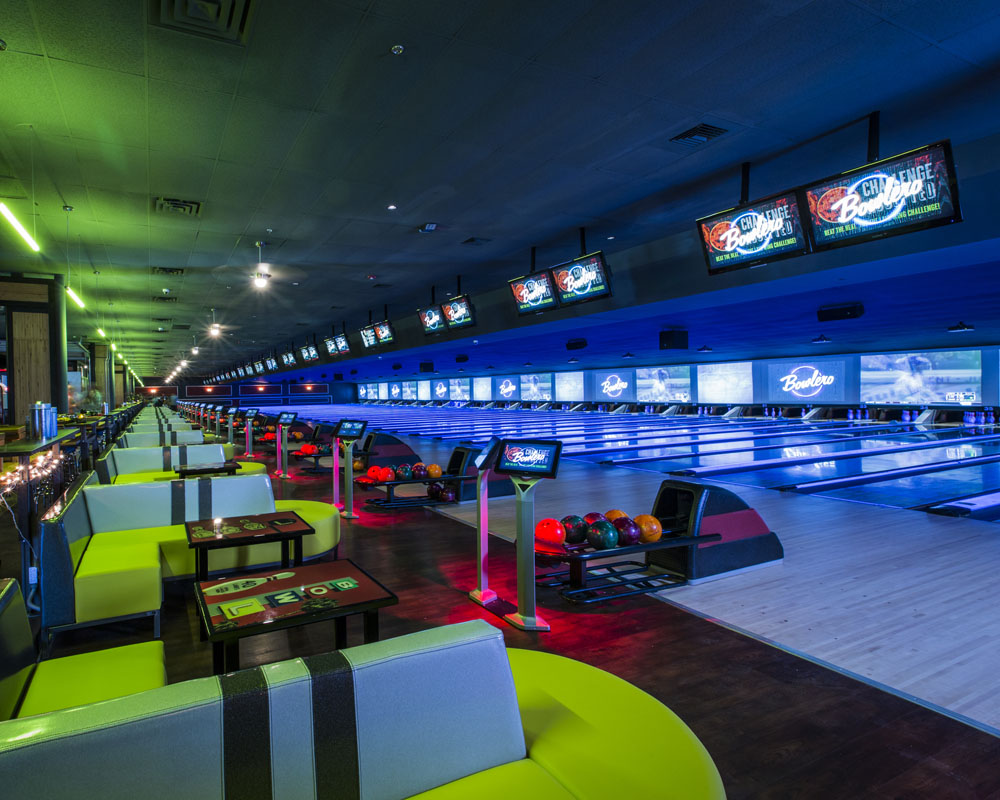 At a California outlet of Bowlero, Lemonade embraced the building’soriginal Googie architecture by adding tiki torches and uncovering a lava rock wall that had long been covered up. A historic motel sign casts a neon glow in the lobby, creating the ideal photo op for hundreds of Instagrammers. In the San Antonio location, Lemonade brought a Mustang and an Airstream into the space and added modern cowhide chairs in a lounge area.

Nearby, a big-screen television streams HD footage of a crackling fireplace; above it, a metal sculpture mimics an animal mount, with horns made from the headers of a V-8 engine. It’s a 21st century take on Western style that’s equal parts kitschy and classy. 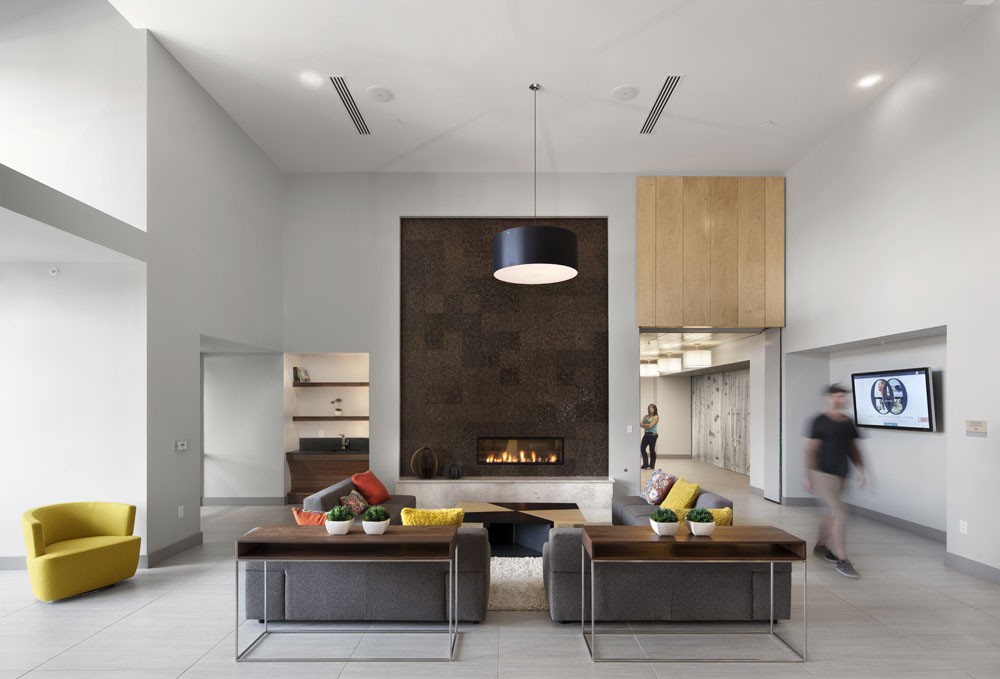 At One Observatory Park, an apartment complex in South Denver, Studio Lemonade incorporated a variety of wood surfaces and splashes of color to warm up the modern aesthetic. Photo: James Florio & Kyler Deutmeyer

“As soon I saw it, I said, ‘You can’t touch this – people pay a fortune to make a building look like this, and you’re inheriting it,’” says Huff. Some changes were required so the site could function like a proper office, but Studio Lemonade embraced the building’s past, with exposed ductwork, salvaged corrugated steel, and the clever layering of wood, metal, laminate, and leather.

“We knew Motive’s new space had to allow for visual connections – spaces that could be closed off, and spaces that could be opened up – so we added movable walls and garage doors that open up into soft seating and lounge areas,” says Huff. “From viewpoints to lighting, to creating those convertible spaces, we’re always finding new ways to tell a story in the space. And with every single project, we learn something new.” 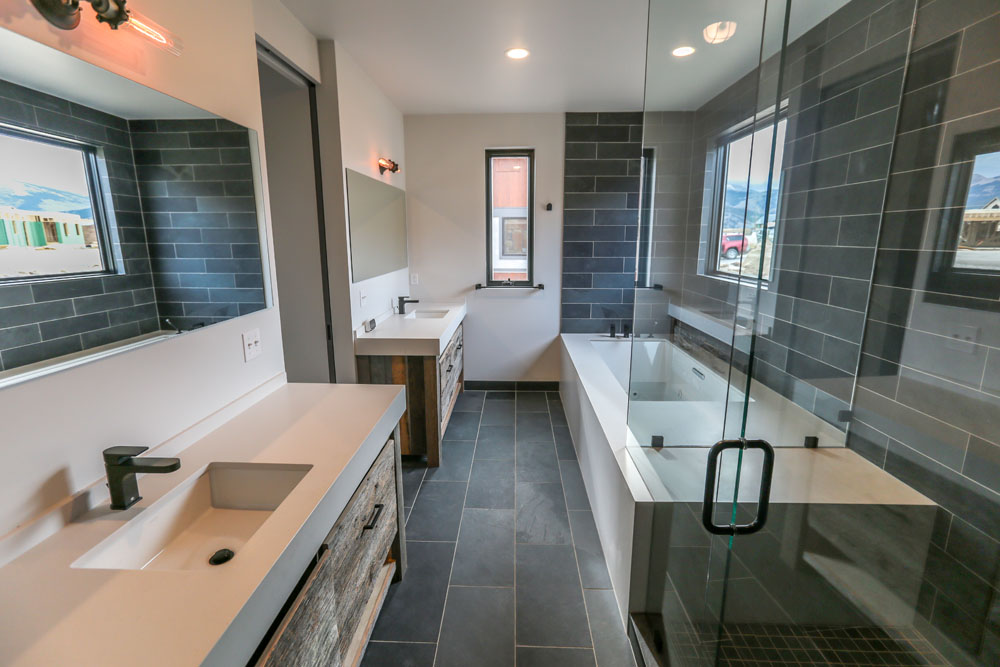 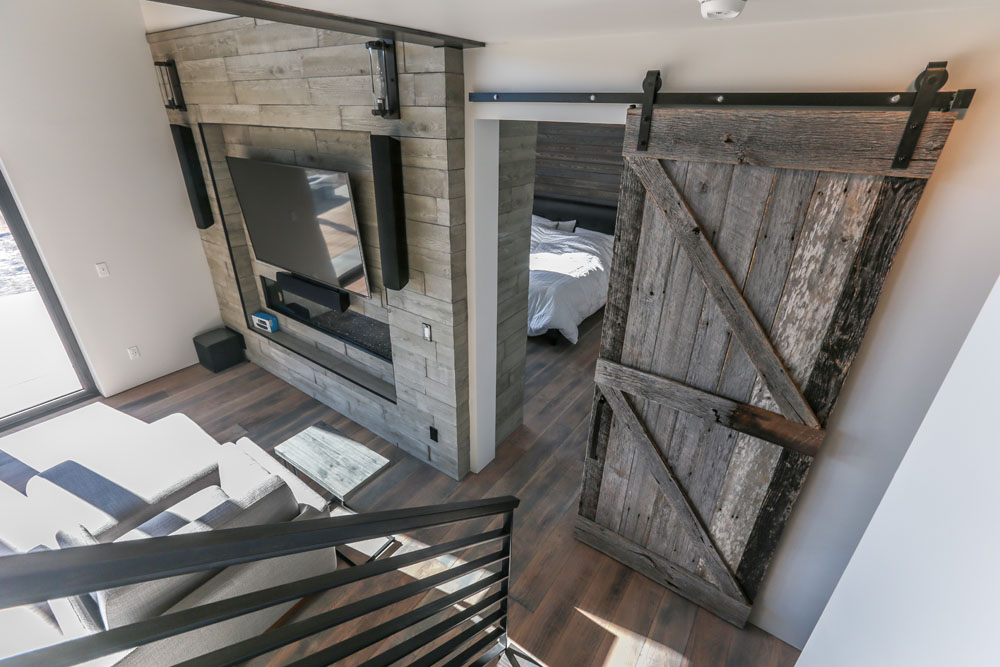 Rather than limiting itself to one speciality, Studio Lemonade works on commercial space, office space, and residential properties. Above, the Patrick Residence in Crested Butte makes a statement with neutral tones and natural elements. Photos: James Florio & Kyler Deutmeyer

The Alamo Drafthouse Sloans Lake, which opened Monday, May 15 at 4255 W. Colfax, sees work from Huff that marries the look and feel of its neighborhood environs with that of a classic movie theater experience.

“The design is an acknowledgment of Colfax Avenue’s rich history of Bars and entertainment,” says Huff. “An evolution of the corner dive bar that is welcoming, comfortable and an extension of the living theater.  The theater design is vintage, authentic and a reflection meant to be the backdrop of memories to be made.”

The stylishly designed movie house serves as a tentpole of the Sloans Lake area of Colfax seeing a revitalization.

“I’m so proud and humbled to be a part of this amazing community here at Sloans Lake,” adds vice president of operations for Alamo Drafthouse Denver, Walter Chaw. “As a Colorado native, I’m thrilled to be involved in the revitalization of one of the most historic neighborhoods in the United States.” 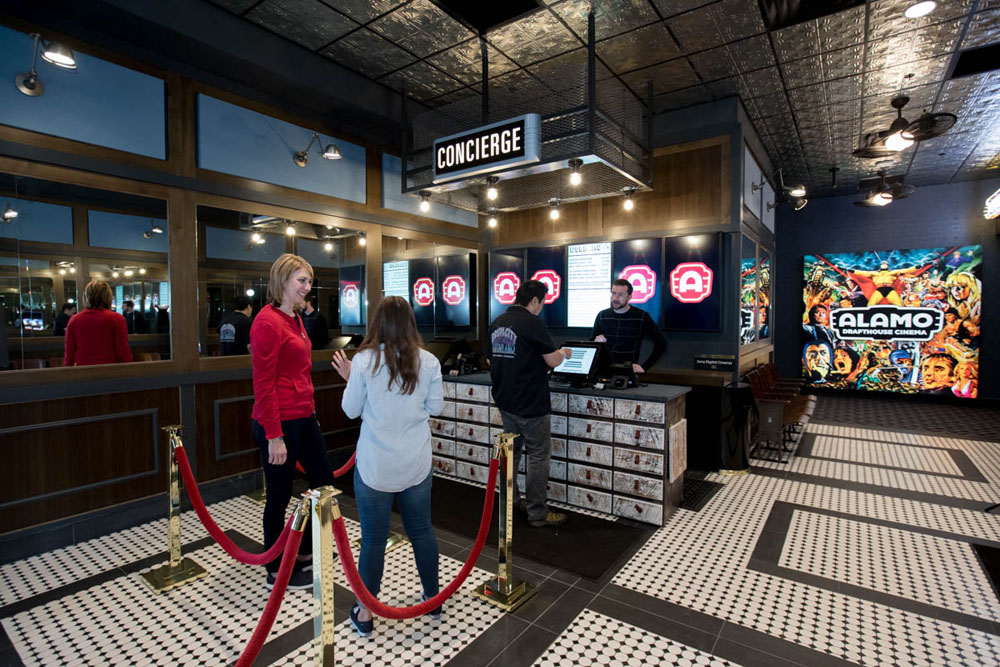 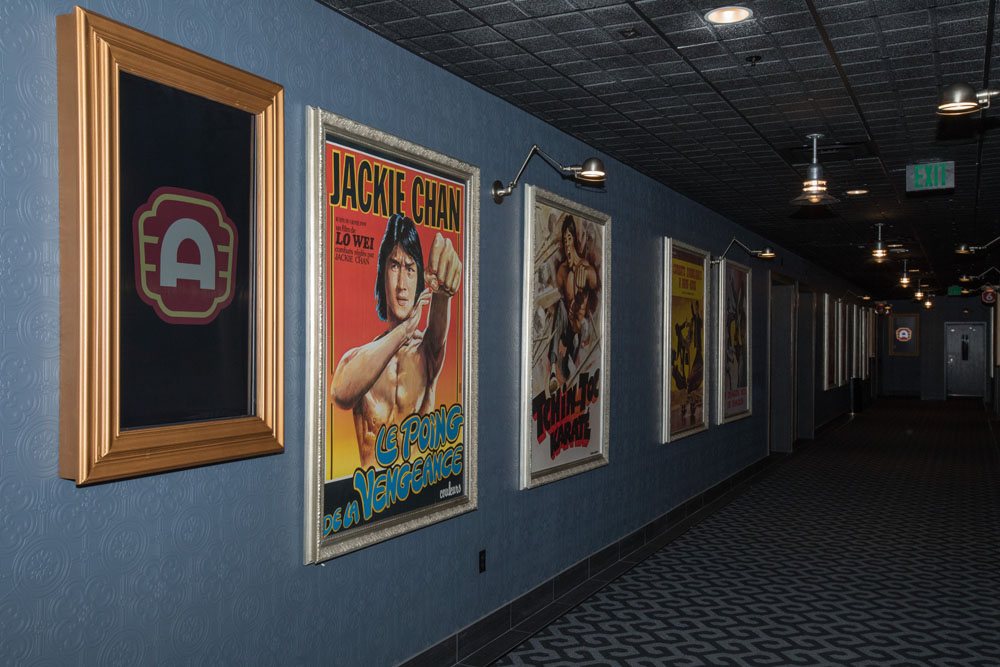 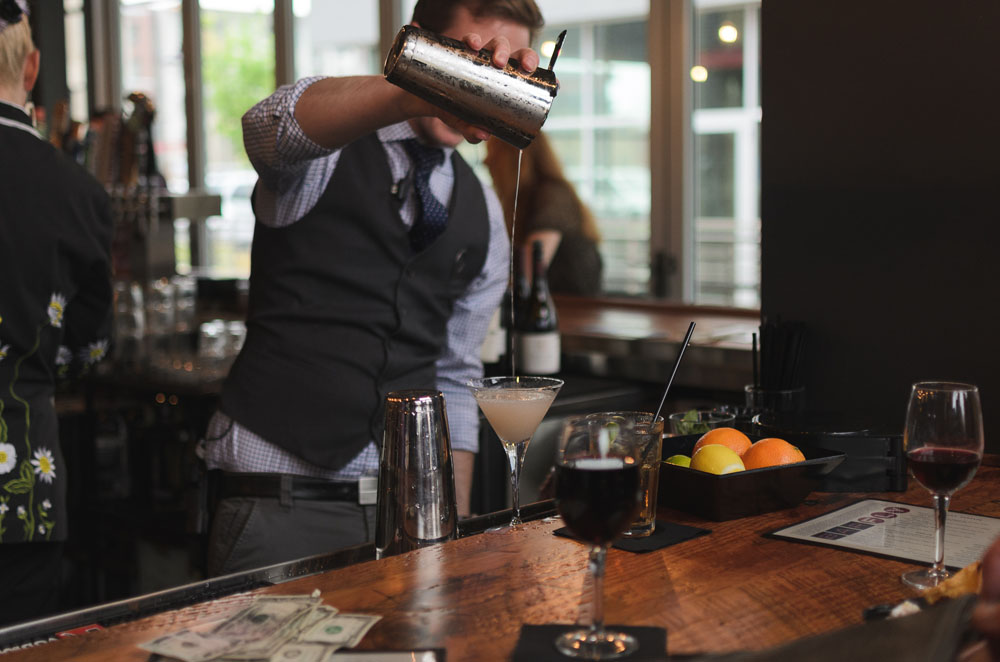 Alamo Drafthouse Cinema’s are known for being a movie lover’s delight. As such, Huff mirrored the vintage design of classic movie houses for the newest location at Sloans Lake. For the stylish BarFly inside the theater, he took inspiration from the rich history of it’s Colfax Avenue location. Photos: Top two by Black Cherry Photography and bottom by Austin Cope.