THE DEVIL MOST CERTAINLY IS IN THE DETAILS AT DENVER’S NEW IL POSTO RESTAURANT ON 26th AND LARIMER, MAKING ITS PRESENCE KNOWN IN THE ART-AND-DESIGN-FOCUSED RINO DISTRICT. A RECENT MOVE FROM ITS HUMBLE SPOT ON 17th STREET PROMPTED THE PROGRESSIVE ITALIAN EATERY TO LOOK TO THE MINDS AT LIVSTUDIO TO TRANSFORM A ONCE NONDESCRIPT 3000-SQUARE-FOOT WAREHOUSE INTO A SLEEK EMBODIMENT OF ITS INVENTIVE YET INTIMATE FARE. 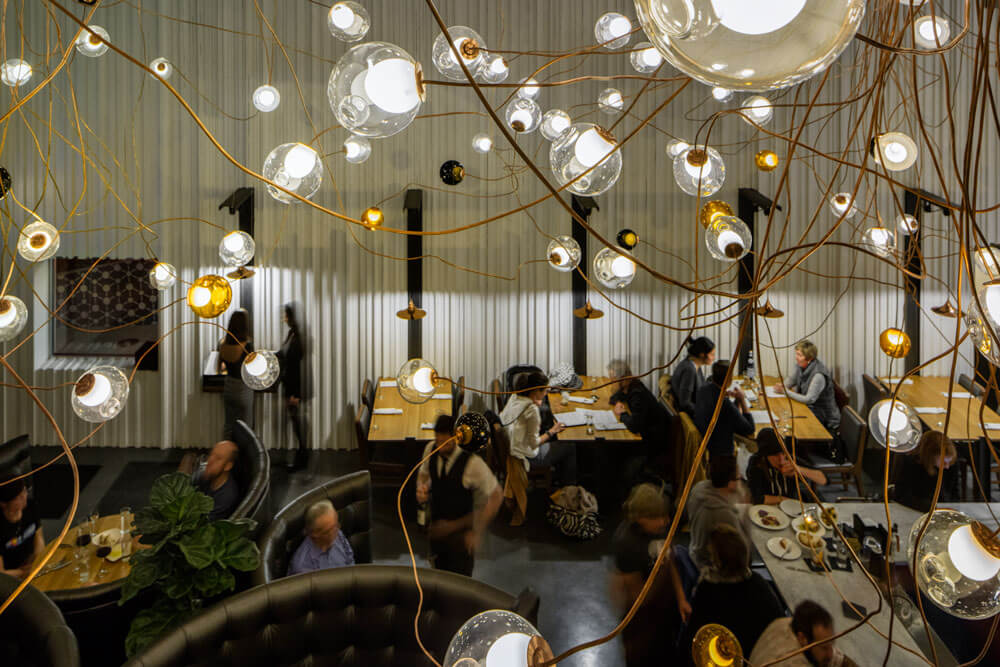 The vision for Il Posto was to create a variety of contemporary spaces and elements visually interconnected within the sprawling, somewhat divided, industrial plot. This was achieved by combining smaller mood fixtures such as a two-story wine rack highlighting the bar area (and communicating the restaurant’s dedication to wine service), and one powerfully influential piece: a hyper unique, hand-blown glass fixture of 111 Bocci lights, referencing the owner’s Venetian heritage.

LIVstudio architect Brandon Anderson thought it of great importance to connect each engineered element with the soul of the restaurant and its chef. Anderson, an AIA and LEED AP-certified designer, is famous for bringing this care and architectural savvy to his projects – counting among them the contemporary Studio Como showroom, with which LIVstudio cohabitates a building.

It was due to this proximity to Studio Como that during the design process for Il Posto, Anderson was presented with an opportunity to take the routinely residential Bocci lights to an expansive, commercial stage never done before. “Traditionally it’s a really high-end fixture made for small, personal spaces,” he says. “There was a large installation at the Victoria and Albert Museum in London during September of 2013, but otherwise Denver is the only place to witness such a volume of these lights.”

Initially, LIVstudio had another fixture selected for Il Posto. They had the same conceptual purpose of filling the two-story space with multiple light pieces that connect the mezzanine, lower level, and upper dock, to inspire voyeuristic interconnectivity among the different seating groups. “Once Brad Fentress of Studio Como came to us with the opportunity to get Bocci lights at a cost that would make the project doable, we first wanted to ensure that Il Posto was committed to the great maintenance and cleaning required of such pieces,” Anderson says.

You could travel to London, New York, Tokyo or Los Angeles, and find that no other commercial space, let alone an eatery has ever featured this volume of hand-made Bocci lights. And Il Posto quickly saw the extraordinary opportunity of having such a piece in-house. 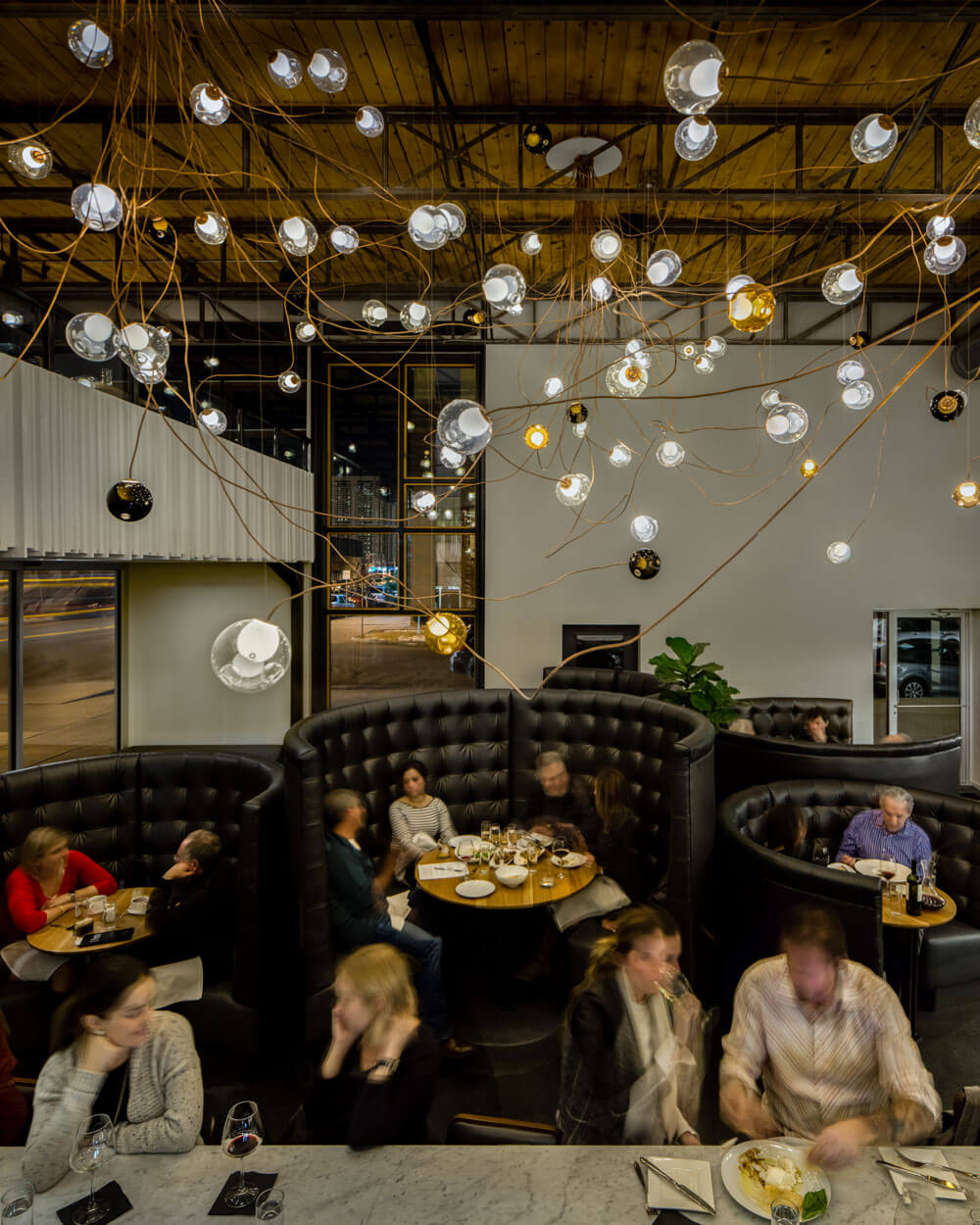 Working with Bocci’s co-founder and creative director Omer Arbel, Anderson chose three fixtures that contain a combined 111 hand-blown glass lights in clean, amber, and smoke for Il Posto. The fixtures are suspended by separate canopies, creating a mirage of one single display. Each of the 111 globes glow at the end of its own winding copper wire.

Arbel numbers his creations in the order he conceives them, and Il Posto’s fixtures utilize a large-scale variation of his 14 Standard series pendants. While Anderson included other categorical art pieces into the overall design – such as a larger-than-life Scrabble wall to playfully communicate seasonal menu ingredients being served and the two-story wine rack – the Bocci lights thread every element. They do so, both artistically and practically, in an overarching spatial projection of expressive purpose.

Differing slightly from the globe-like 14 Standard series, each point of light in the Il Posto piece is cast glass in an almost perfect sphere made in two halves via a hemispherical mold. Each is articulated cast glass that has a frosted cylindrical void housing either a 10-watt xenon or 1.8 watt LED lamp. Optically, the magic comes from a strange eyebrow-like feature in the center, formed by the natural ripple produced when glass dries as it’s being poured into the cast. 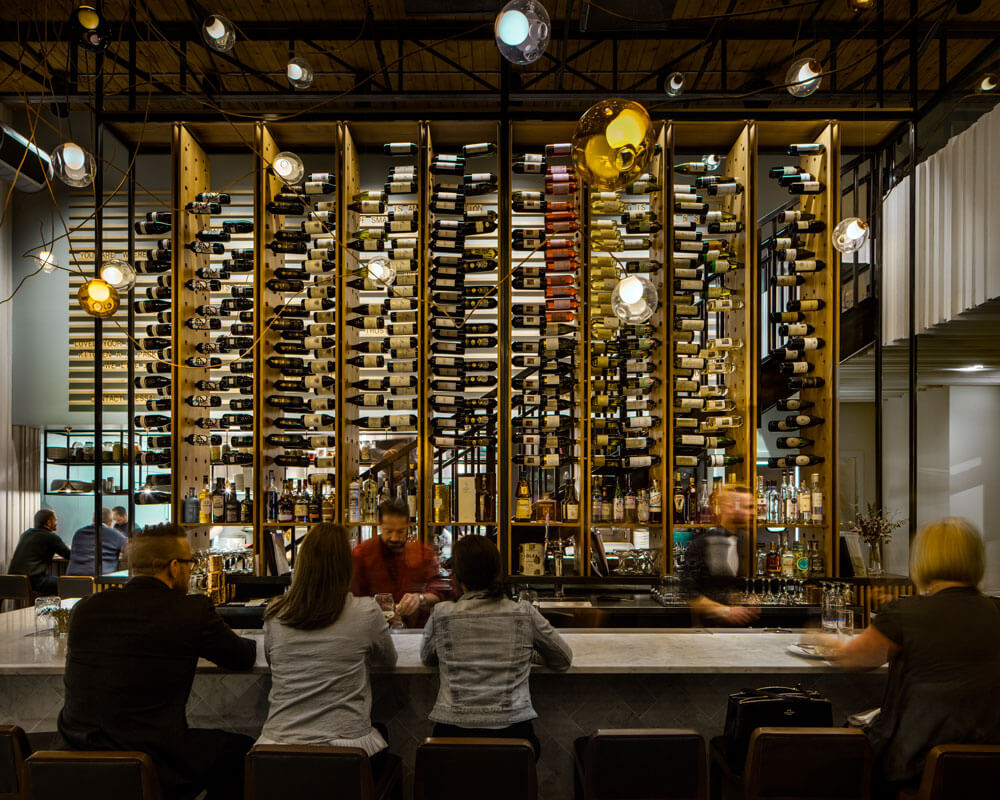 The two story wine rack at Il Posto serves as a focal point within the space. It also functions as a screen between diners and the kitchen. Guests are afforded multiple views of the towering piece as the stair to the mezzanine slides behind the rack and moves through the space.

While first experimenting with these lights, Arbel initially sought to saw down the bubble to achieve a perfectly circular piece. This only proved to strip away the magic. Arbel explains the light was not designed so much as it was a product of its intrinsic physical and chemical qualities. He has grown Bocci around this principle of being intricately involved in the manufacturing of each concept.

He describes the result as what a chandelier might look like in an ambient field condition as opposed to a condensed single fixture. The separation and span of space between each orb allows the occupants of the room to experience the shapes around them. Perception of these many pinpoints of light being both near and far away is a mechanism to occupy the great volumes of a room: high, low, far, and near.

Anderson states, “The organic geometry of the copper tubing and hand blown orbs float within the two-story space, while circular booths below create intimate spaces for diners within a large open area. One of the astounding things Omer focuses on is to capture the essence of light. He doesn’t try to make a fixture that throws out light. He tries to capture it and let itself be art.”

As fate would have it, Brandon Anderson’s office at LIVstudio is positioned just across the street from the new Il Posto. Although many other upcoming restaurant projects are on his docket, his proximity to the rare Bocci installment is familial, almost as though the stars would have it for him to watch over their occupation. Perfetto! 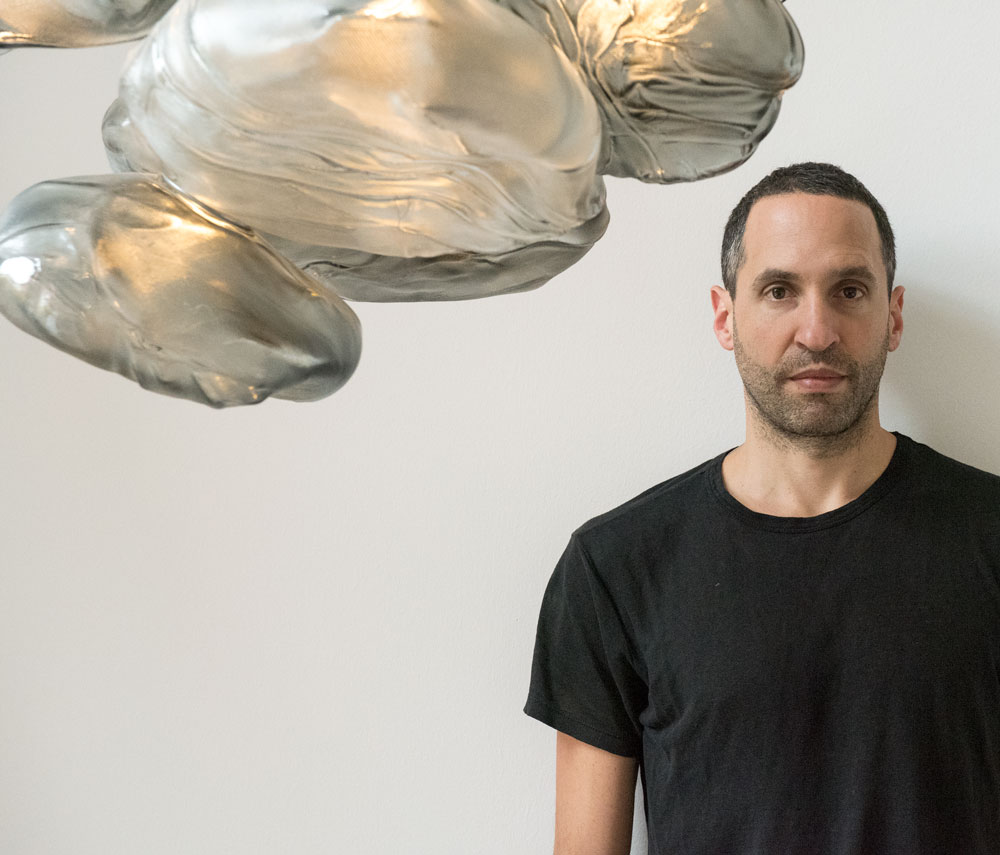 Omer Arbel’s legend is rooted in his dedicated material’s research and execution. Born in 1976 in Jerusalem, Arbel relocated to Vancouver with his family at 13, where he still lives today – splitting his time between there and Berlin. As a teenager, Arbel achieved some acclaim as a competitive fencer, and it wasn’t until after college that his first real work in design would occur during an apprenticeship with Catalan architect Enric Miralles.

The organization and composition of our installations aims to interact with its environment in the same way.”

Omer’s process of “letting it be” is anything but a hands-off approach. Quite the opposite. Omer is deeply involved with the making and material of each piece. This level of involvement removes layers of translation ordinarily there between the designer and manufacturer.

Arbel co-founded Bocci in 2005 with financial partner Randy Bishop. They structured it to function as a co-operative of designers, architects, craftsmen, technicians, testing facilities, raw material suppliers, and manufacturers. They first came to market with the 14 Standard series. And the ensuing success of 14 instantly shot Bocci to iconic stature, receiving a Red Dot Award and Good Design Award from the Chicago Athenaeum Museum of Design.

Here’s a look at a few of his other notable works: 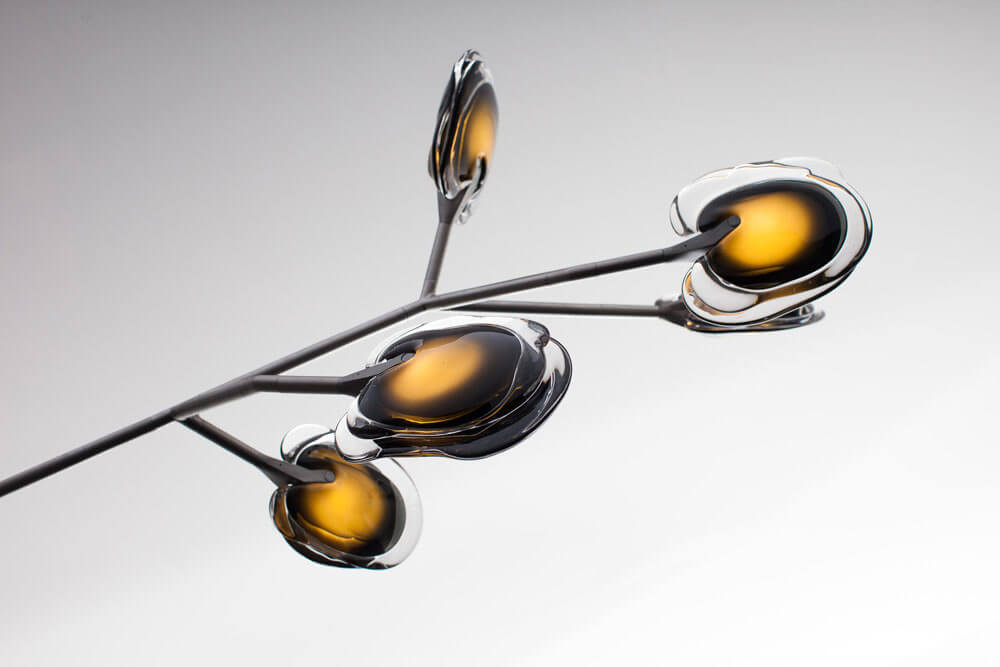 16
Formed by sequentially pouring varying opacities of molten glass into three unique layers, the result of this coating is a horizontal oyster shape that maintains the illusion of liquidity. Due to the nature in which the molten glass dries, each layer responds to the indeterminate shape of the pour before it, creating a wholly individual body for every light. Two of these pieces are attached and brought to glowing life via an internal LED lamp. 16’s are most famously displayed on a stainless steel tree. This modular armature is offered by Bocci in mimicking Olive, Cypress, Hawthorne, Elm, Aspen, and Birch silhouettes. 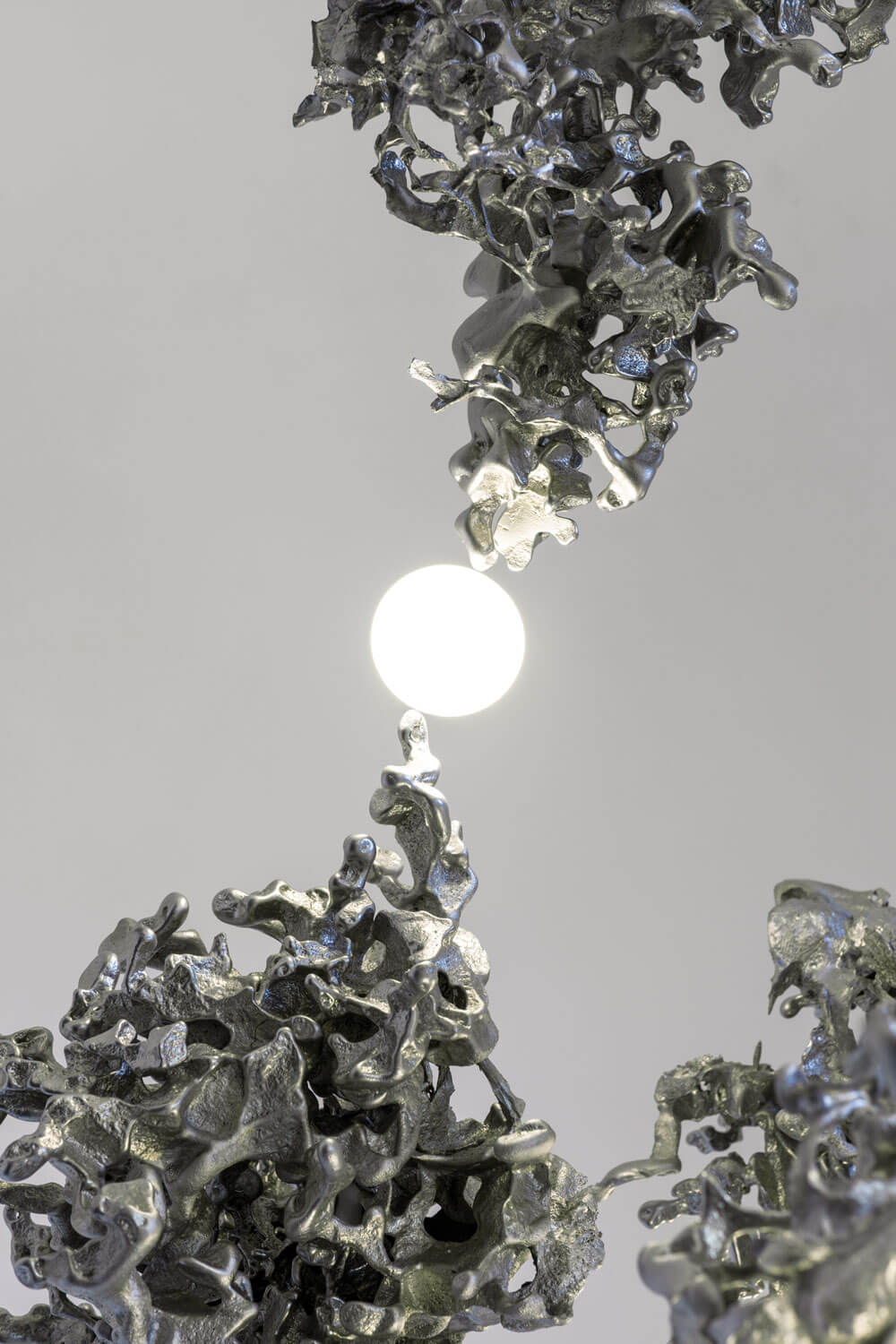 44
Commissioned with sculptural intent for London’s Barbican Centre, 44 comprises more than 300 free-poured aluminum coral-looking forms. Each form gains its shapes from the molten aluminum hardening in a canister filled with impeding resin boulders. These large forms are hung suspended by a matrix of spider web cables, strung together in the style of large-scale holiday popcorn and cranberry garlands. Intense globes of light are strung between pieces of coral – illuminated without a switch by a low voltage electricity transmitted through the cables. The forms are hung to both descend and expand through the space. 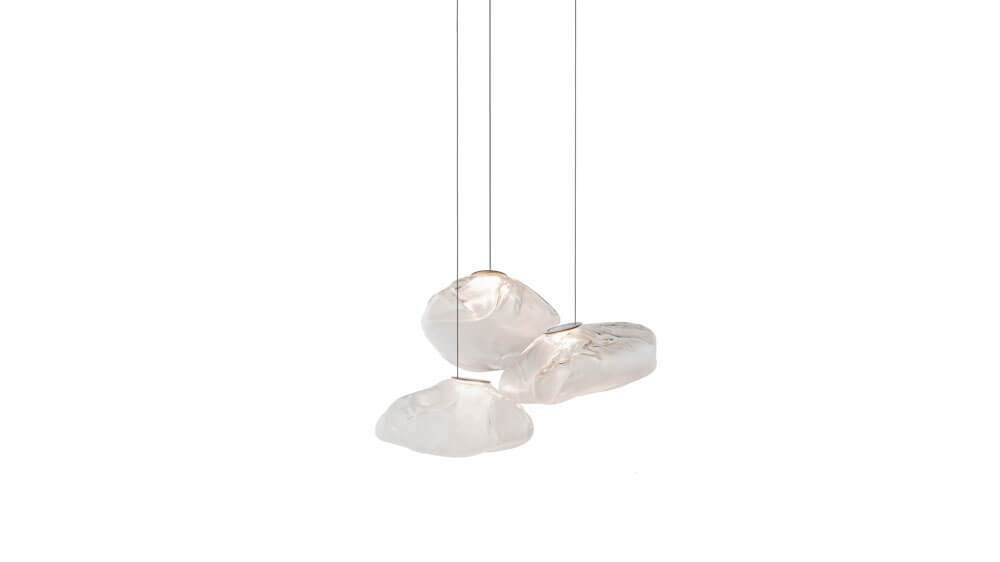 73
These white jellyfish clouds are the otherworldly result of liquid glass being blown into a folded, highly heat-resistant ceramic fabric. No resulting plume shapes the same, however each achieves both a soft yet permanent form. Textural expression as a result from the fabric vessel is the cornerstone for 73. Meanwhile a flat LED fills the internal volume with diffused light, accentuating the breath within each cloud.