THE COLLABORATIVE SPANISH TRIO OF RAFAEL ARANDA, CARME PIGEMAND AND RAMON VILALTA ARE THIS YEAR’S RECIPIENTS OF THE 2017 PRITZKER ARCHITECTURE PRIZE. THEY ARE NOTED FOR THEIR WORK IN WHICH LANDSCAPE AND ARCHITECTURE ARE UNITED TO CREATE BUILDINGS THAT ARE INTIMATELY CONNECTED TO PLACE AND TIME. 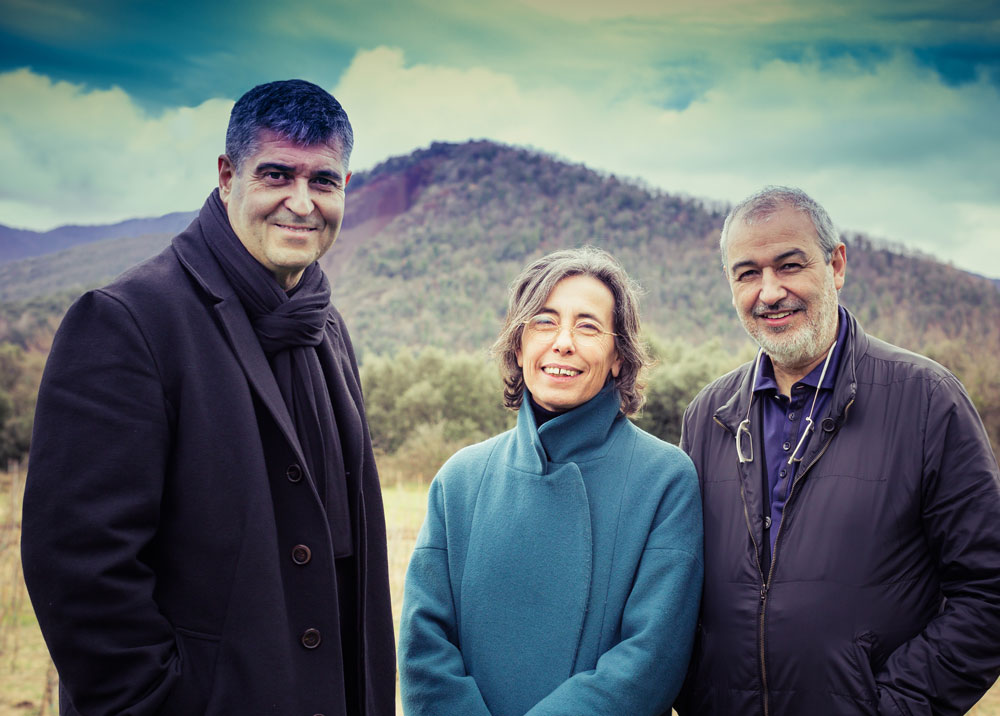 Rafael Aranda, Carme Pigem and Ramon Vilalta hailing from the Catalonian region of Spain have worked together collaboratively since founding their firm RCR Arquitectes, in their hometown of Olot in 1988.  “Their work demonstrates an unyielding commitment to place and its narrative, to create spaces that are in discourse with their respective contexts,” states Tom Pritzker, chairman of the Hyatt Foundation which sponsors the prestigous award. “Harmonizing materiality with transparency, Aranda, Pigem and Vilalta seek connections between the exterior and interior, resulting in emotional and experiential architecture.”

The selection of Mr. Aranda, Ms. Pigem and Mr. Vilalta is unique in that this is the first time that three architects together have been honored with the prize. Their intensely collaborative way of working as a unit, where the creative process, commitment to vision and all responsibilities are shared equally, led to the selection of the three individuals for this year’s award.

Here’s a look at some of their work that caught our eye: 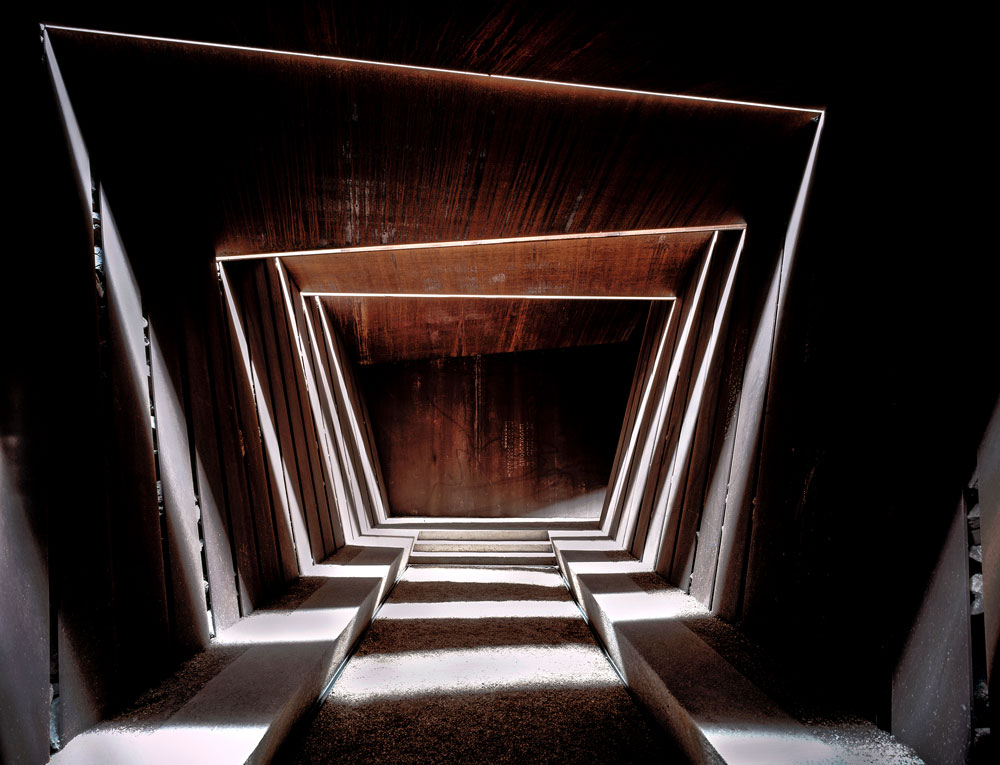 Bell–Lloc Winery 2007 Palamós, Girona, Spain. Photo by Hisao Suzuki
This is an experience for all the senses. The silence can be “heard”, the aroma of the wine can be perceived, the strength of the materials and the changes in temperature can be felt, the minimal light and shadows are experienced. Above is a view of the interior of the winery toward the tasting room. The slats allow air, light and rain to enter and create ever changing shadows. 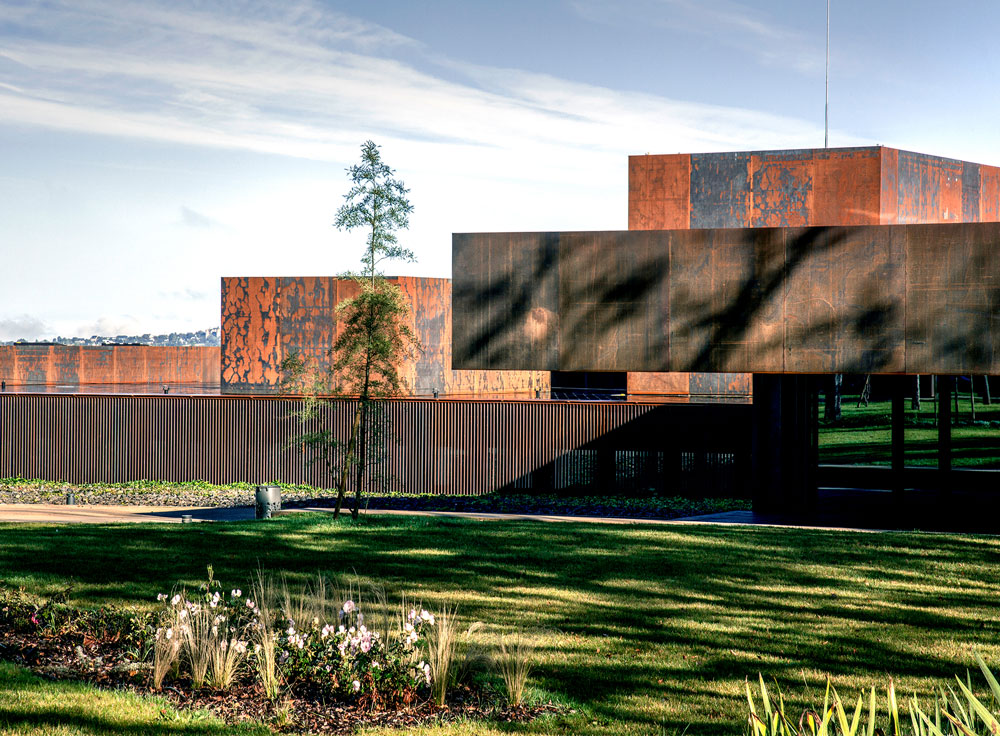 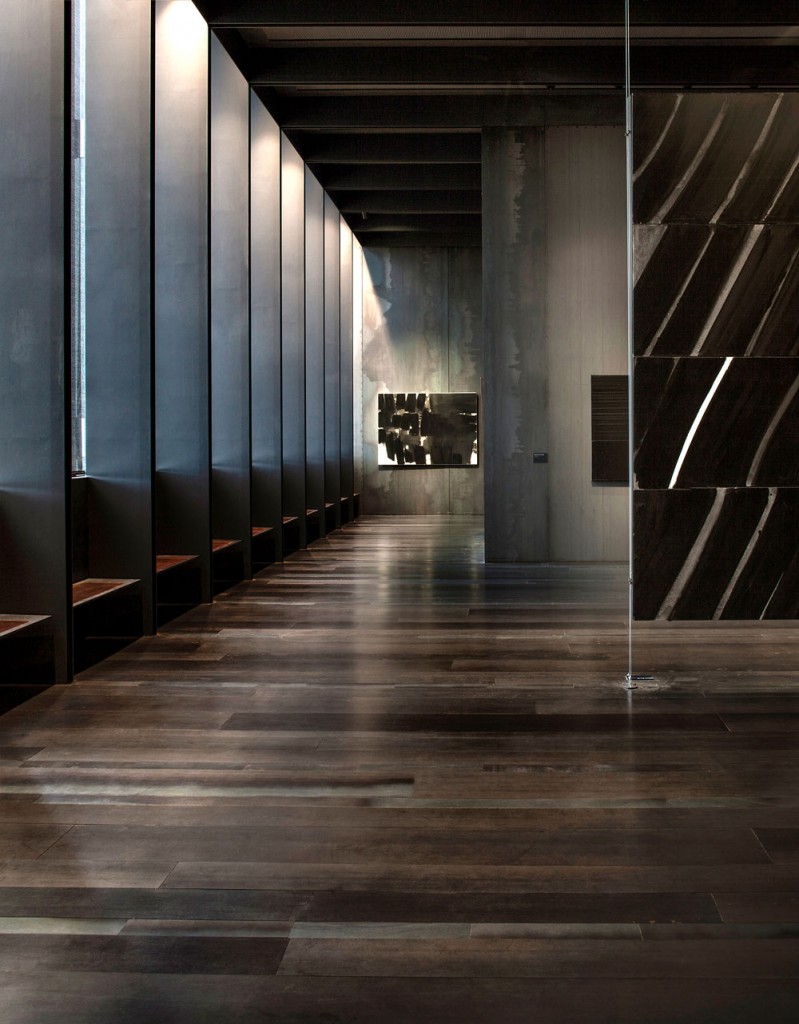 Soulages Museum 2014 Rodez, France, in collaboration with G. Trégouët. Photos by Hisao Suzuki
Located in the small southern French city of Rodez, and opened in 2014, it houses the diverse collection of works by the abstract artist, Pierre Soulage, from stained glass windows, preparatory works for the windows, figurative paintings and other early works, as well as complete printed works. A document center, temporary exhibition space, children’s workshops and storage spaces complete the program. The building, realized in collaboration with local architects, Passelac et Roques Architects, is formed by a succession of cubes. Using just one material, Cor-Ten steel, the building and landscape merge together and will slowly change over time. “Museum and landscape thus have a mutual feedback, like the painter and his work, displaying a wealth of relationships where nothing can be removed, because everything that belongs to this new created world is inherent.”

The view of the interior of the museum showcases the relation between the space and the paintings of Soulages. 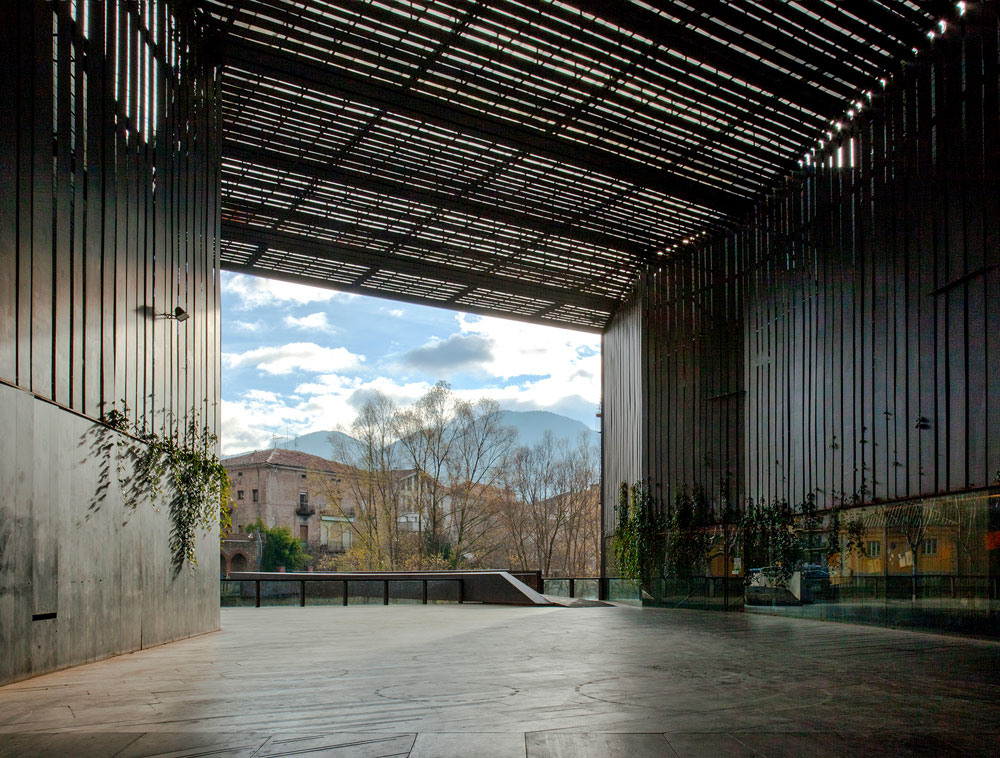 La Lira Theater Public Open Space 2011 Ripoll, Girona, Spain, in collaboration with J. Puigcorbé. Photo by Hisao Suzuki
The demolition of La Lira Theater left an urban void in the historic district of Ripoll, a town in the province of Girona, overlooking the Ter River. With recollections of the scale and spirit of the former theater, and also understanding the importance of town squares, the architects have created a unique covered square, suitable for many types of activities and an outdoor space to be enjoyed informally by residents. Beneath this, there is an underground multi-purpose room. The new Lira structure frames the view across the river toward the newer part of the town and the mountains beyond. When approaching by the new weathering steel footbridge, also designed by RCR, across the river, it forms a gateway to the old part of town. Weathering steel, the predominant material used throughout, evokes the metallurgical past of Ripoll. 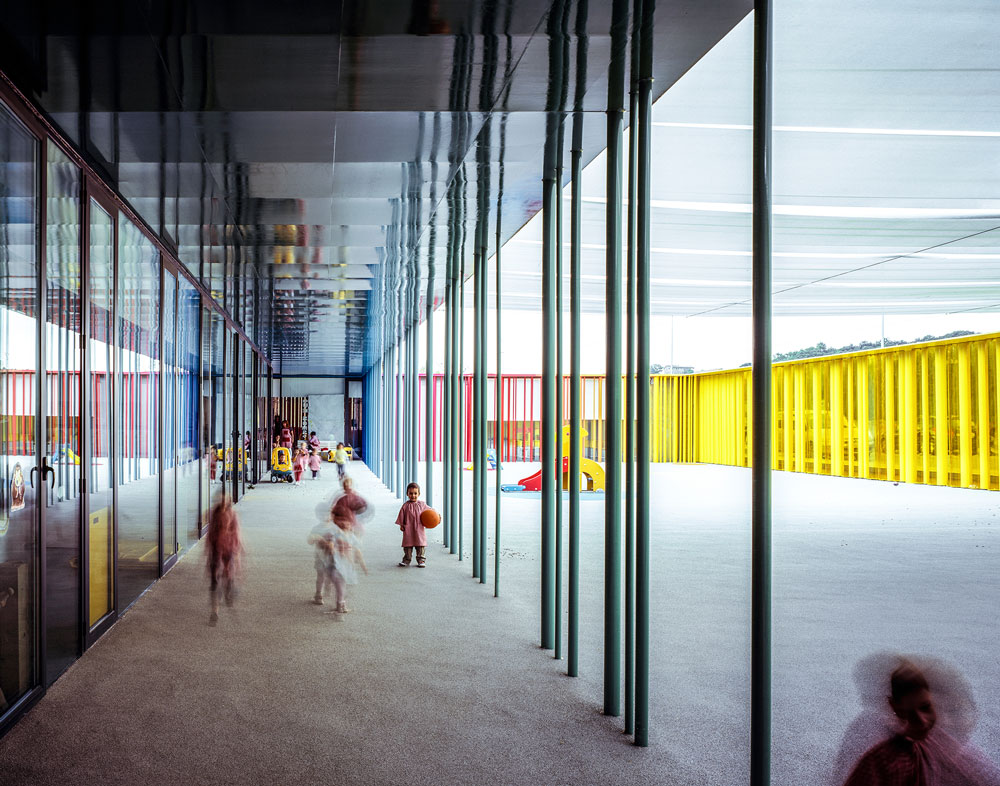 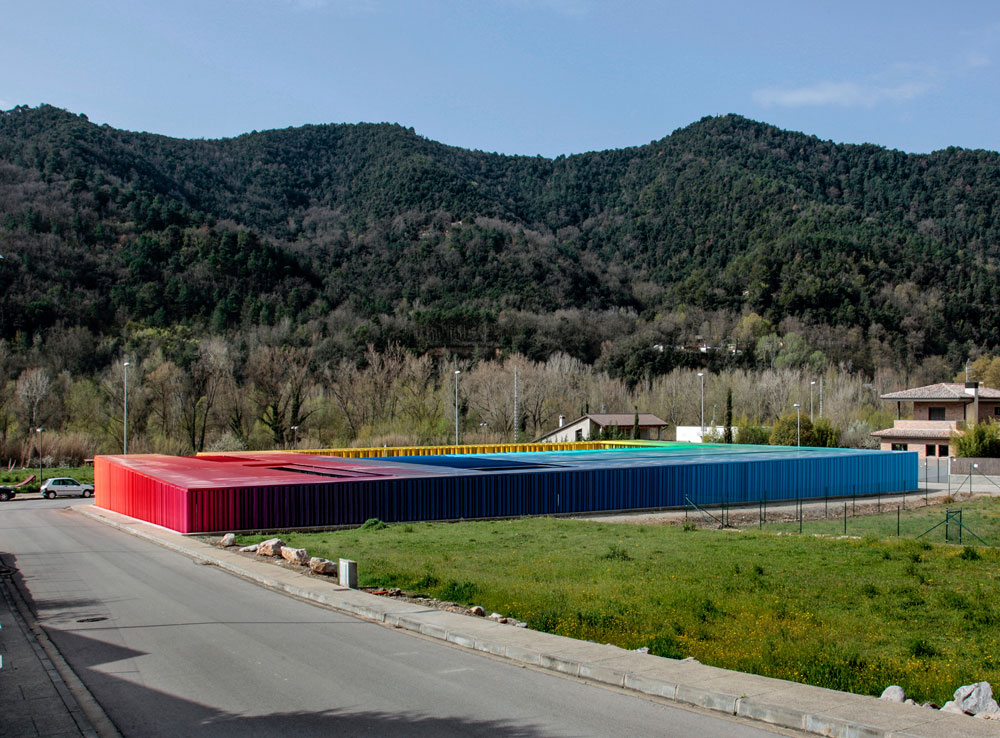 El Petit Comte Kindergarten 2010 Besalú, Girona, Spain, in collaboration with J. Puigcorbé Photo by Hisao Suzuki
The new municipal school, built to free up the old site in the town, has approximately 80 children occupying its 1000 square meters. From the exterior, the almost rectangular building appears simple. Vertical tubes (some of them structural) of different diameters create a perimeter using a rainbow of colors, which some have likened to giant colored pencils surrounding the building. Some of the tubes rotate and invite the children to play. Floor to ceiling glass is used to enclose much of the building, so that natural light full of color filters in. 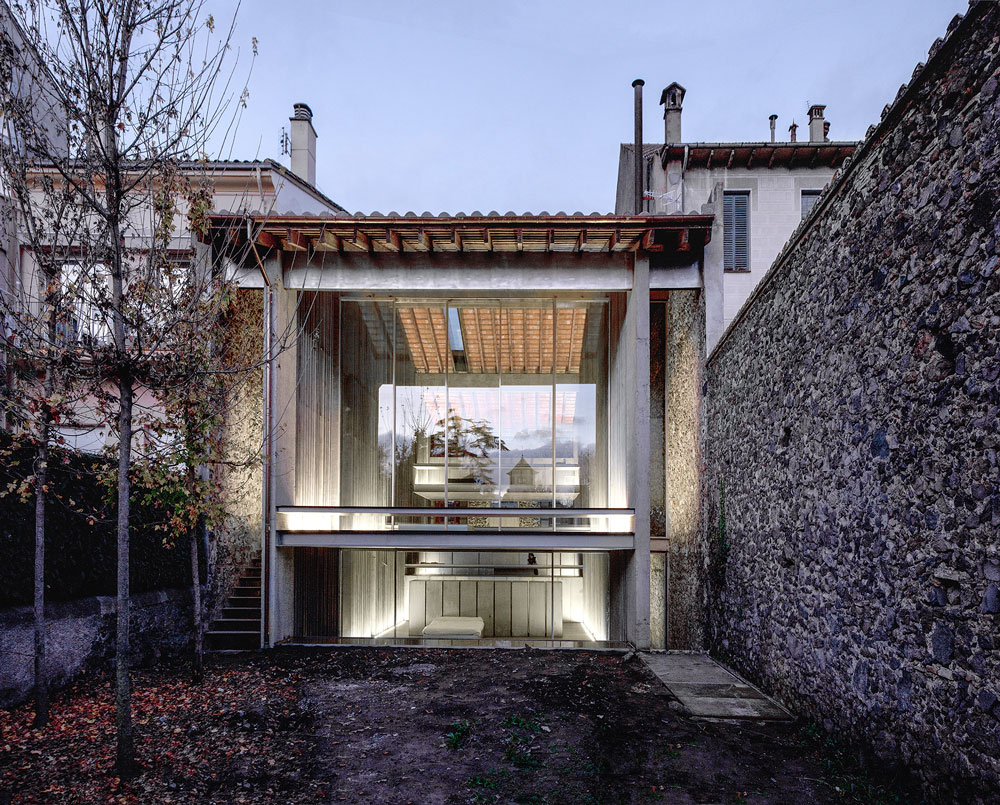 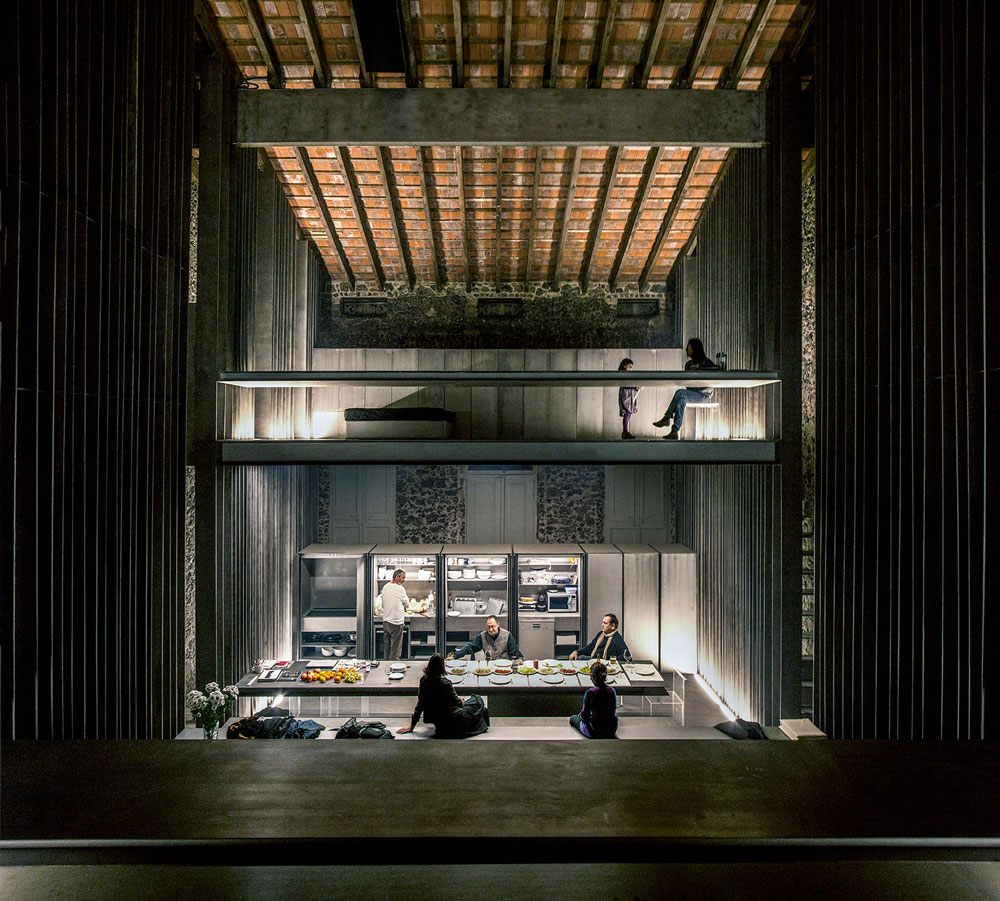 Row House 2012 Olot, Girona, Spain. Photo by Hisao Suzuki
In the architects’ home town, a new house was inserted into the space between two walls when an old house was removed. The main façade has been preserved, as required by the town for heritage purposes, and the new house is conceived as a single space with “floating” platforms at different levels to create the interior living spaces. Several of the platforms serve as seating benches and frame the space.

Although the space is almost entirely open, privacy is afforded by limiting views to some areas. There are two side corridors that run along the depth of the building, encased with steel slats extending to the ceiling that houses the staircases, bathrooms, and utility rooms. The wall towards the back garden is glass, fusing interior and exterior.

The idea pursued throughout the entire project is to return to what is essential to a home, reducing the number of parts to those that are absolutely necessary, and rethinking the nature of the house to allow the life inside to flow naturally.