WE LOVE MOVIES AND WE’RE EXCITED ABOUT THE 89TH ACADEMY AWARDS THIS WEEKEND, BUT NOT JUST FOR THE PERFORMANCES, SCRIPT OR DIRECTION. WE ARE ALL ABOUT TRACKING DOWN MODERN DESIGN AND ARCHITECTURE ON THE BIG SCREEN. 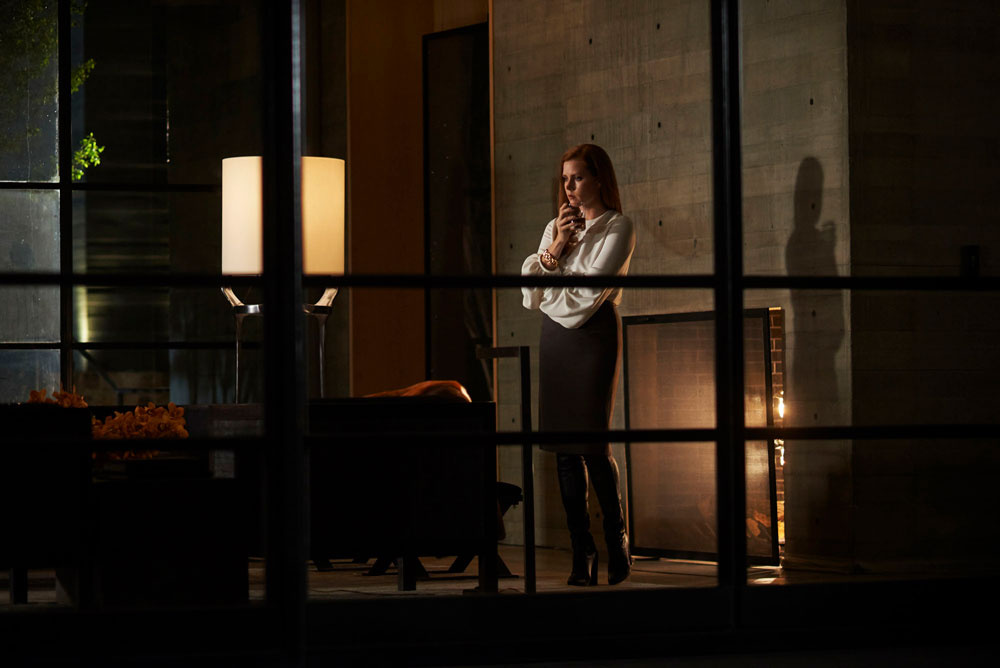 Nocturnal Animals
This year Michael Shannon is nominated for Actor In A Supporting Role for the thriller “Nocturnal Animals.” While his performance is incredible, our favorite thing in the movie is that director Tom Ford (“A Single Man”) continues to showcase striking modern architecture in his films. This is apparent via the stark and spacious residence where Amy Adams’ L.A. based art dealer dwells. Dressed up by set decorators in dark furnishings and heavily curated art to add to the flavor of the film, the home is actually the Malibu abode of real estate exec Kurt Rappaport, designed by architect Scott Mitchell. 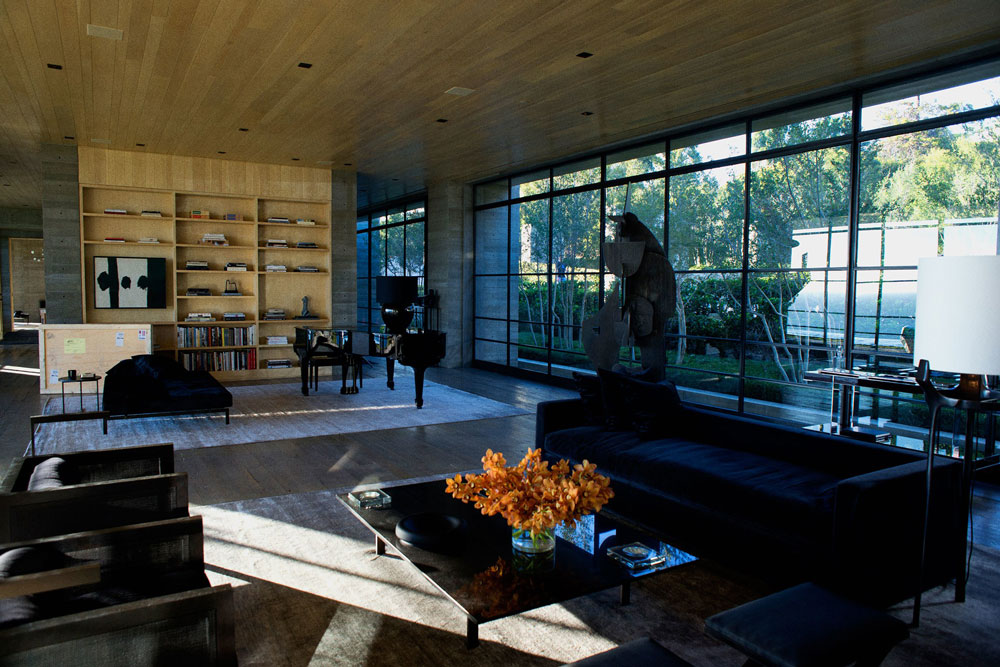 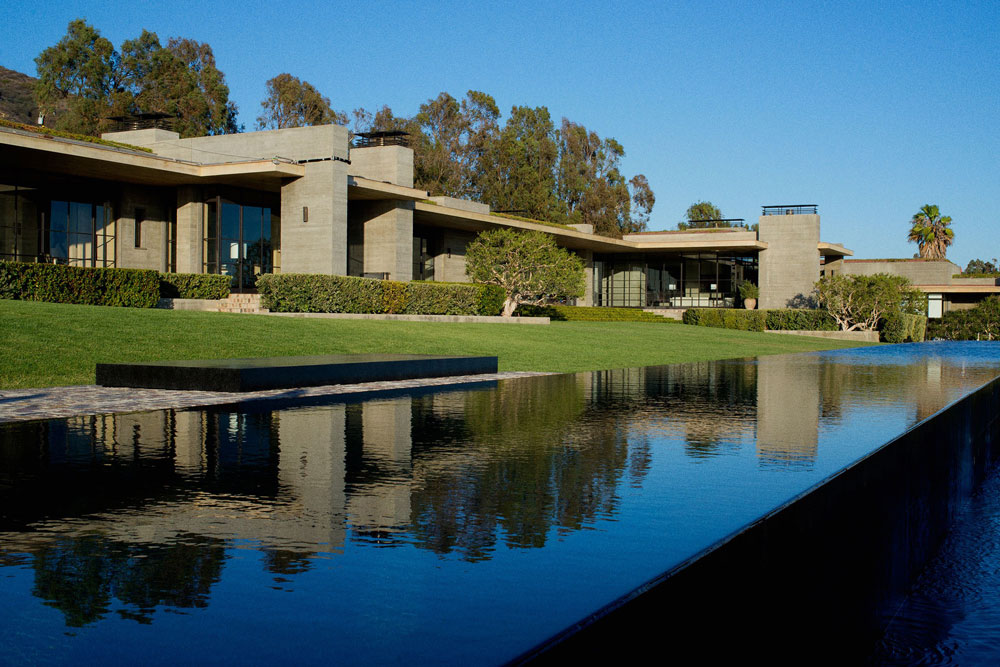 Mitchell takes inspiration in his work from modernists such as Louis I. Kahn and Rudolf Schindler. The home, highlighted by broad sides of concrete and natural woods, overlooks the Pacific and though punctuated by the vertical monoliths as seen in the film, it is much less foreboding (that’s movie magic) and far more inviting, as it sits snugly cliff-side overlooking the ocean. 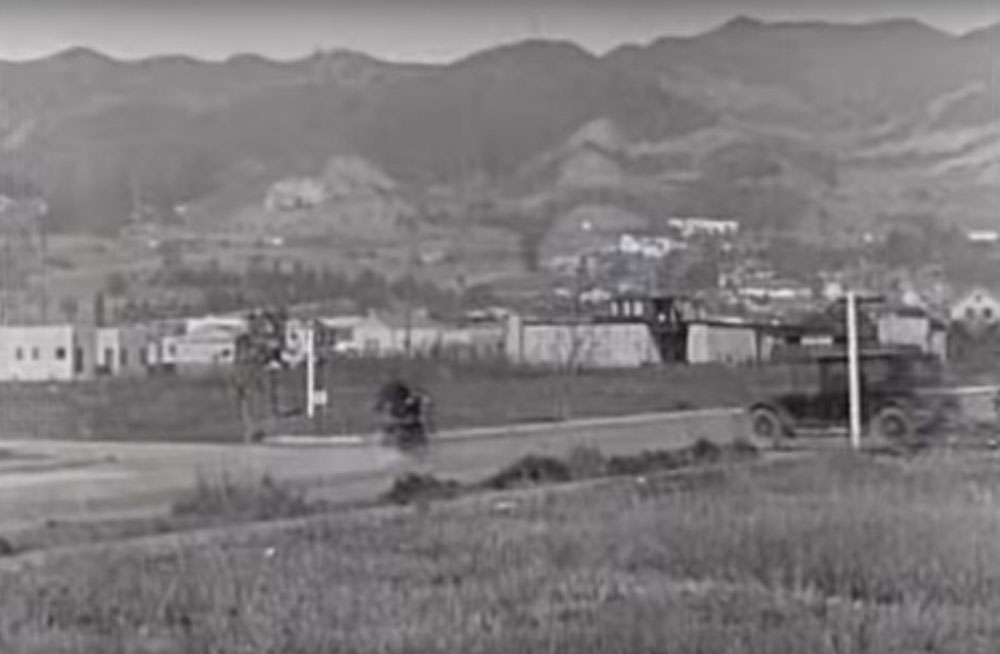 Small Roles
Great architecture finds itself even in a walk-on role going as far back as the silent era. You can catch a glimpse of one of Scott Mitchell’s influences work in the Buster Keaton comedy “Sherlock Jr.” Check out this link and you’ll see Keaton performing a daring motorcycle stunt. At the 1:23 mark he passes Rudolf Schindler’s King’s Road House, a classic of modern design completed in 1922, now serving as a museum open to the public. It’s brief, but well worth the look to get a view of the historic residence in context. 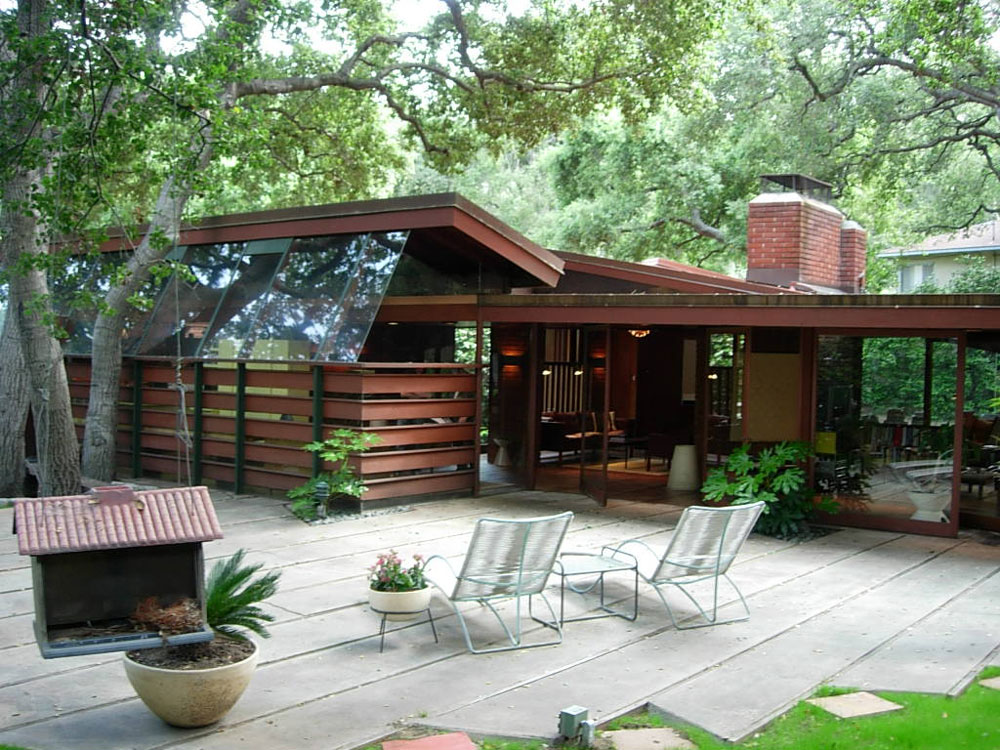 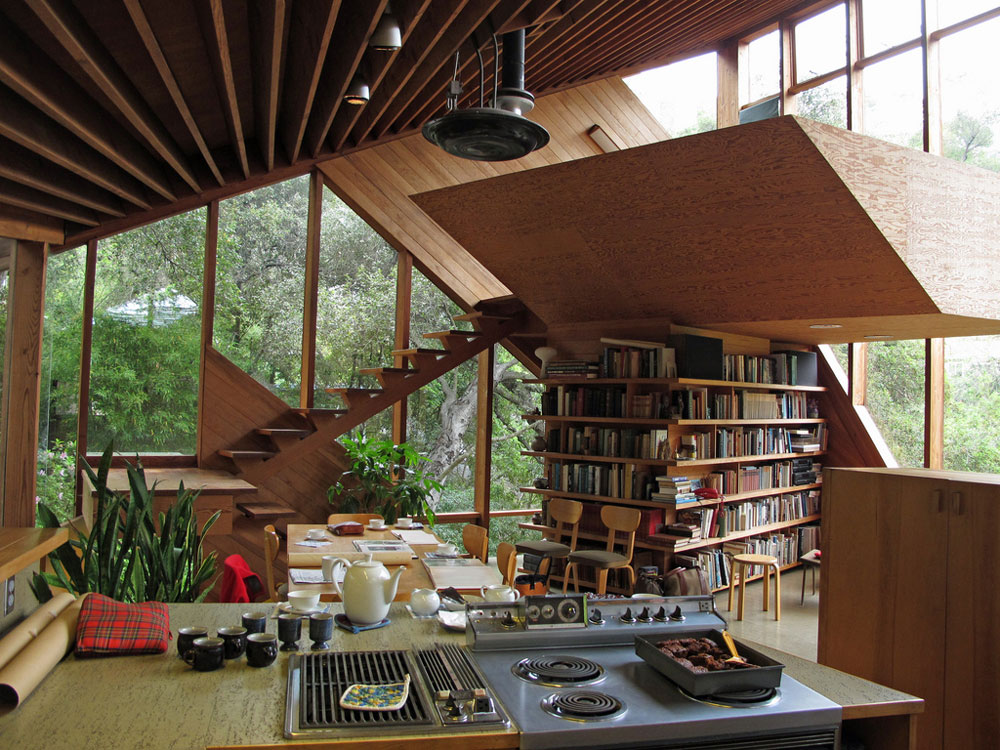 A Single Man
In Tom Ford’s “A Single Man” the lead, played by Colin Firth, resides in the 1949 Schaffer Residence, a small two bed house on a quarter-acre wooded site in the Whiting Woods area of Glendale, California. The home, one of architect John Lautner’s earlier works is an artistic, intricately designed space that sits nicely within its natural surroundings, thanks in no small part to its timber paneling. And though intricate, the flow, as seen in the film, appears open via the use of larger window areas that lead to the outside and clean corners throughout creating a thoughtful living space. 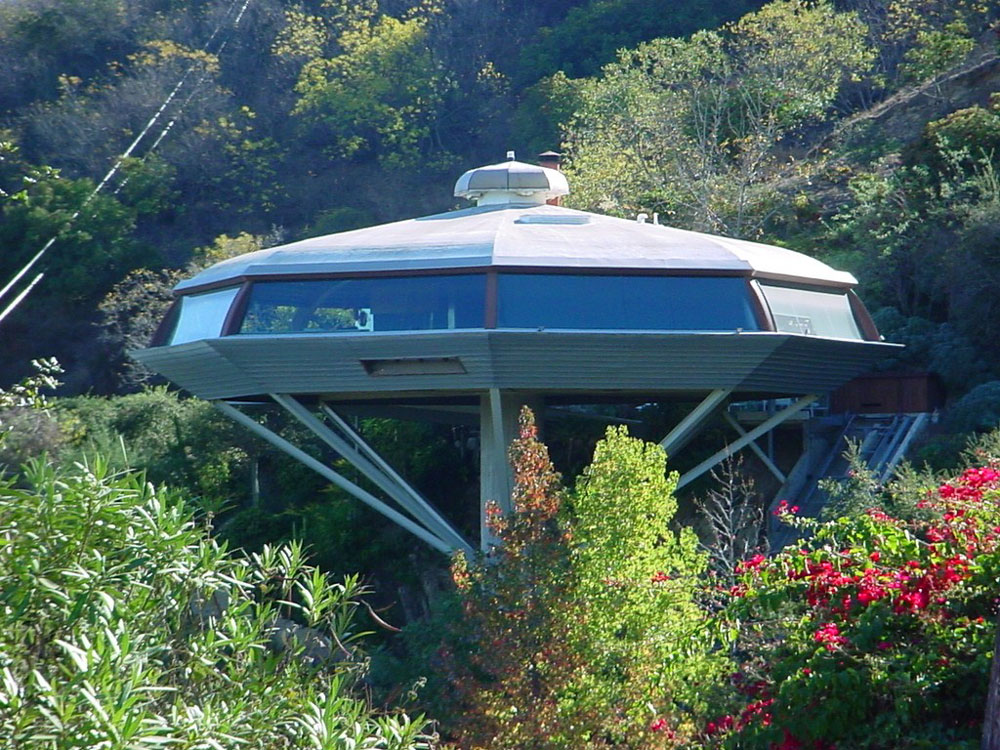 The Works of John Lautner
Much of Lautner’s other more unique work appears in the movies as well. Among the many of his projects showcased by moviemakers, we’re fond of epic designs like the UFO-like Chemosphere (above). Built in 1960, the home appeared in Brian DePalma’s steamy 1984 thriller “Body Double.” And the Palm Springs-situated Elrod House (built 1968), where bikini-clad baddies attempt to assassinate Sean Connery’s James Bond in “Diamonds Are Forever.” You’ll notice that even though the design of these two homes differs from the more-humble Schaffer residence, Lautner continues his theme of synching in with the natural surroundings, meeting the challenges of the sometimes less than ideal site. 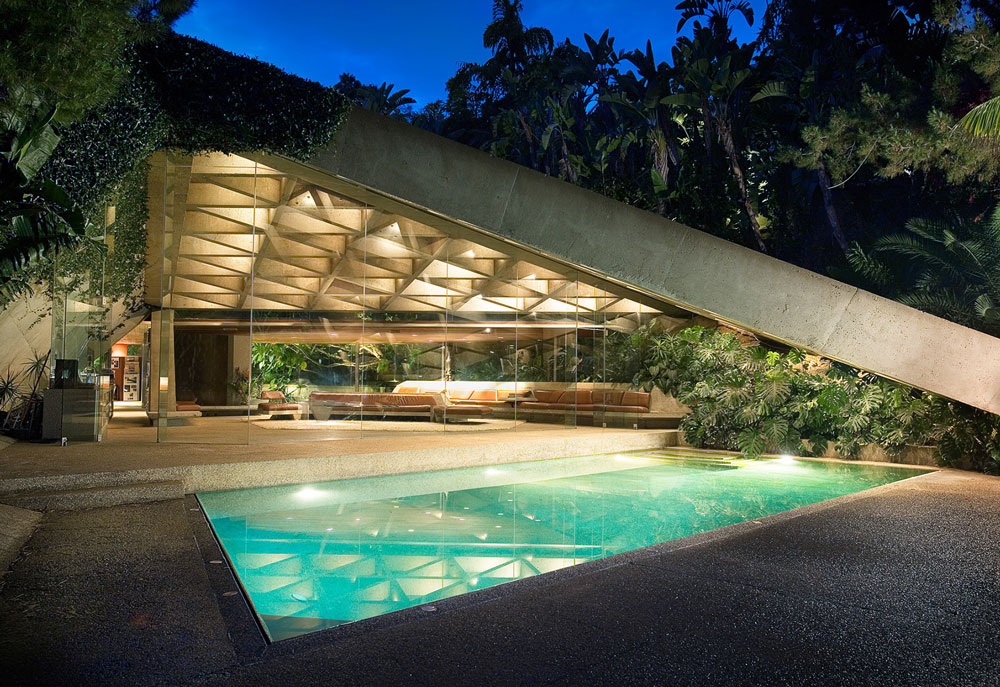 The Big Lebowski
Yet another of Lautner’s modernist works was featured in the Coen Brothers cult cinema knockout “The Big Lebowski.” The Sheats Goldstein Residence doubles as calculating  pornographer Jackie Treehorn’s home where The Dude is forced to abide for a brief bit of questioning. 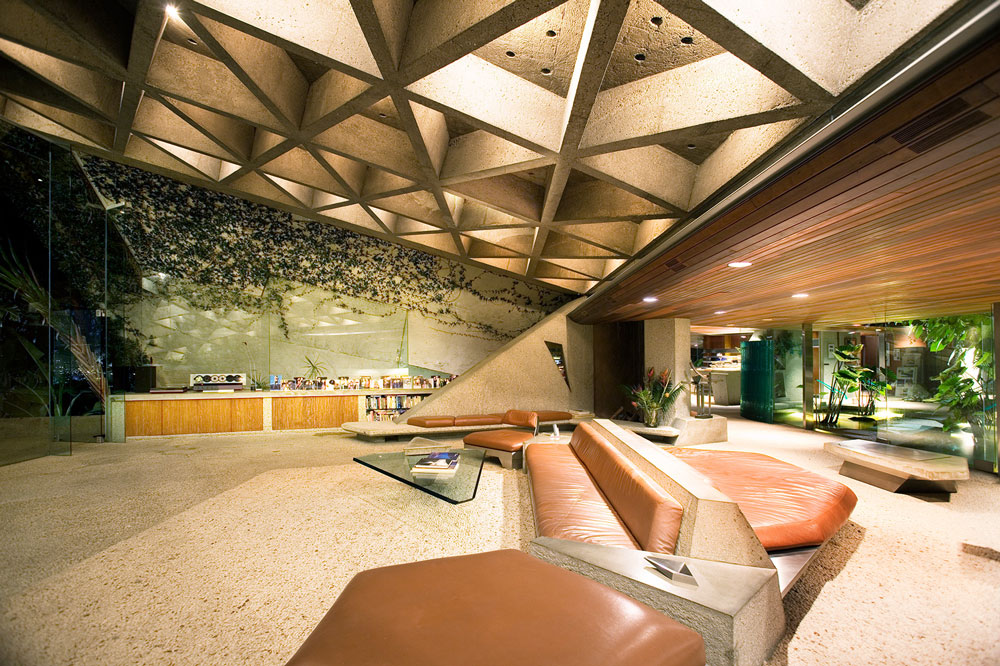 Originally designed and constructed between 1961-63, this angular address is again typical of Lautner’s work – a unique structure fit into existing surroundings. It was built onto a hillside in Beverly Crest, just outside L.A. for a young family. There it opens, cavelike to allow residents to take in the surrounding nature and view. Lautner designed not only the house, but the interiors, furnishings, lighting and features as well – all of which are completely related so that the aesthetic of the forms is a function of the whole. In other words, somewhere in there is a rug that really ties it all together.

Sleeper
With its ties to Colorado, of course we’re fans of Woody Allen’s absurd sci-fi comedy. One of the more recognizable pieces of Colorado architecture featured in this 1970s look at the future is what most locals indeed call “the Sleeper house.” Designed by Charles Deaton in 1963, and informed by his understanding of elliptical geometry, the Sculptured House sits distinctly on Genesee Mountain, visible to passing motorists from I-70. 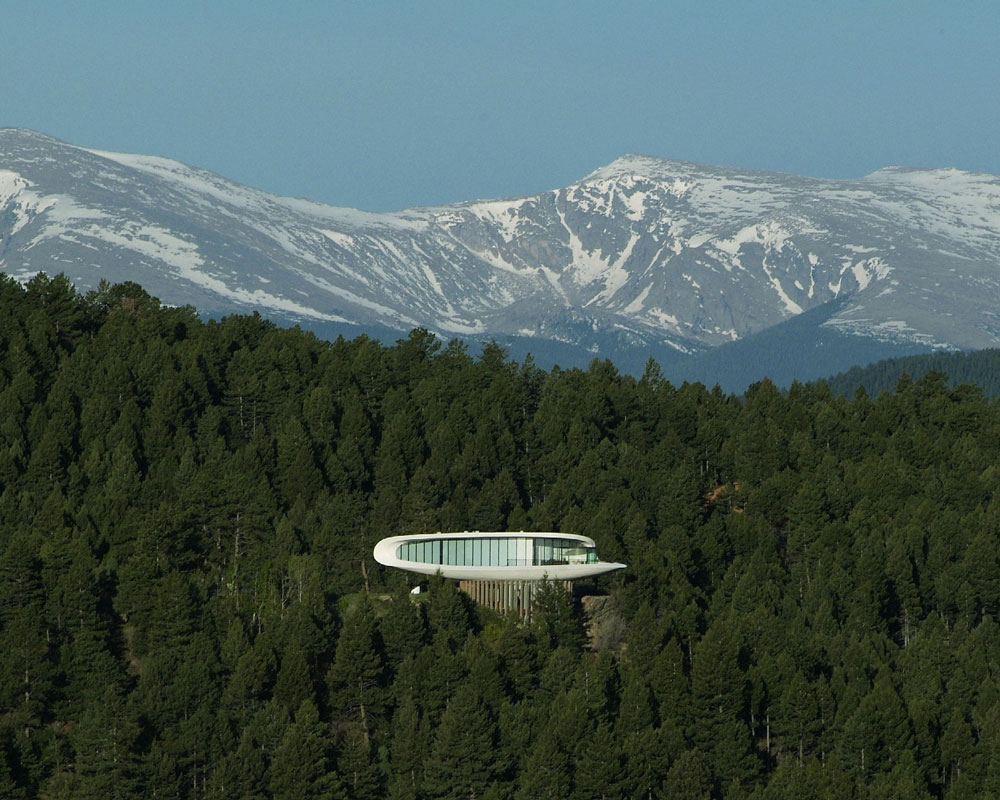 One of the more discussed pieces of architecture in our state, love it or hate it, whether you think it looks like a UFO, a giant clam or a work of genius, you can’t deny its status as a Colorado landmark. The 5-level, 7,700 square-foot home was sold to a local developer in 1999 who worked with Deaton’s daughter to finish the design. 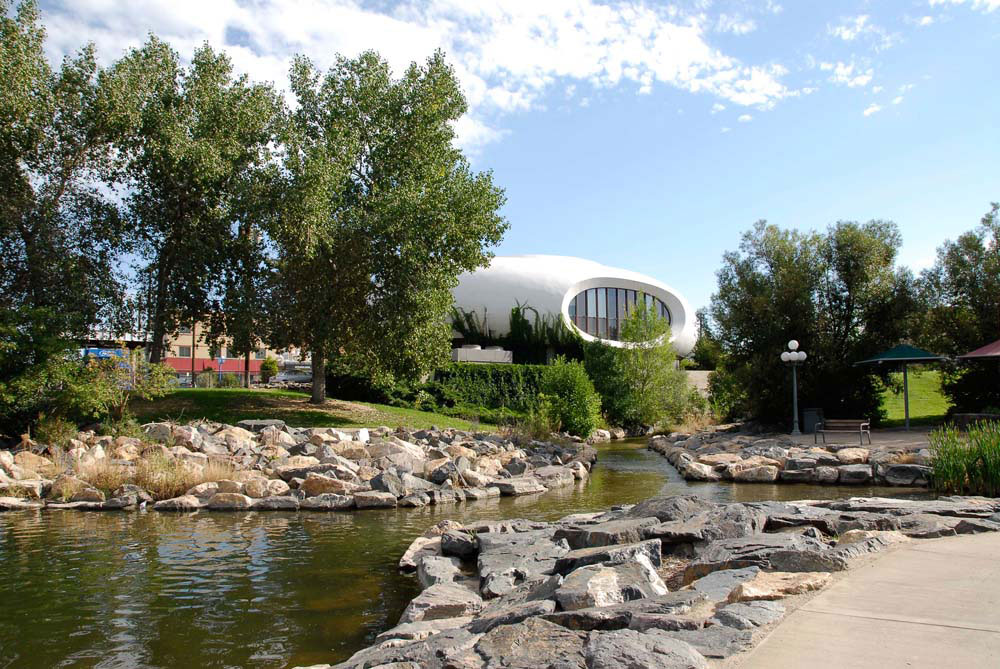 Keaton’s legacy can hardly be overstated. In addition to the Sculpture House, and Arrowhead Stadium in Kansas City, another recognizable structure of his is the Key Savings Building at Broadway and West Hampden. We featured the project in our Summer 2016 issue. Step inside the 10,000 square-foot of interior space and immediately visible are the dramatic flourishes: its asymmetrical void shape punctuated by three distinct openings in the upper of its two levels which houses the main entrance.

You’ll also catch some other local architectural gems in “Sleeper.” In a quick scene, we see a futuristic car drive by the Boettcher Memorial Conservatory at the Botanic Gardens. And the squat, single-level Mile High Church, at 9077 W. Alameda in Lakewood recognizable due to its many arches was funnily enough converted into a McDonald’s for the film. 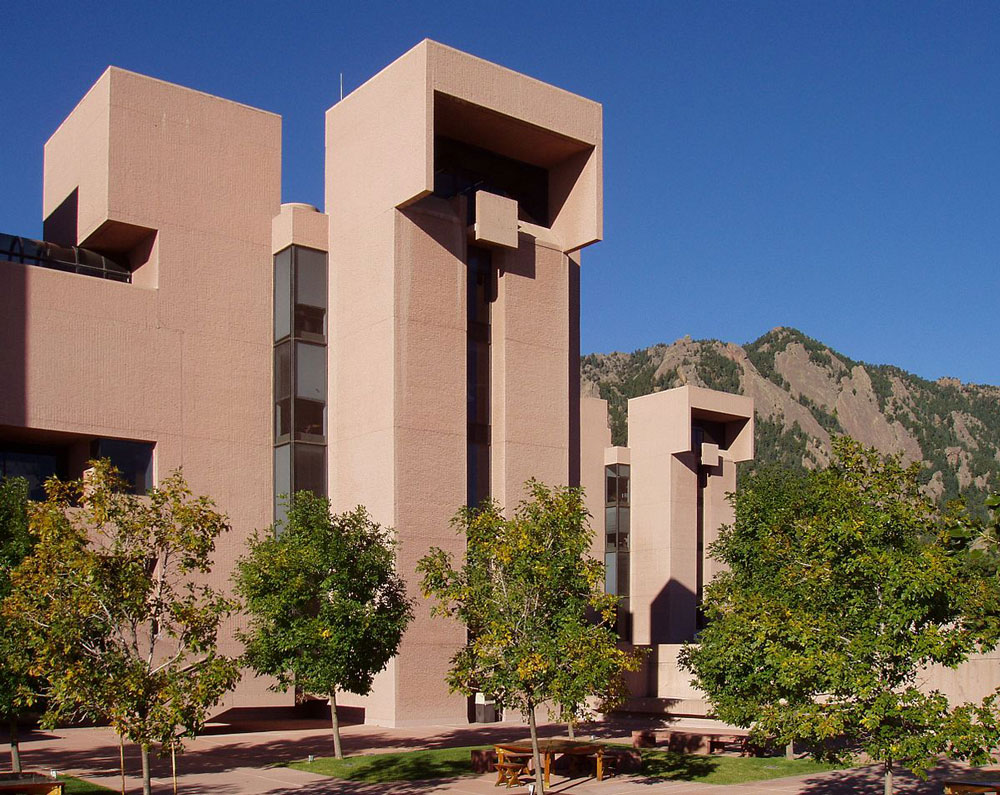 There’s a better look at I.M. Pei designed Mesa Laboratory of the National Center for Atmospheric Research in Boulder. Pei based his project on the Anasazi cliff dwellings of Mesa Verde, laying out geometric shapes for the buildings and utilizing a local pink-hued aggregate to help the complex blend in with the surrounding Flatirons.