The ascent of the River North Art District (RiNo) to the status of significant Denver neighborhood happened fast, as gaggles of exciting new restaurants, breweries, shops, galleries, and housing seemed to emerge in unison. What was once a forgotten outpost of warehouses on the far side of downtown now rates among the city’s hottest places to live and work. 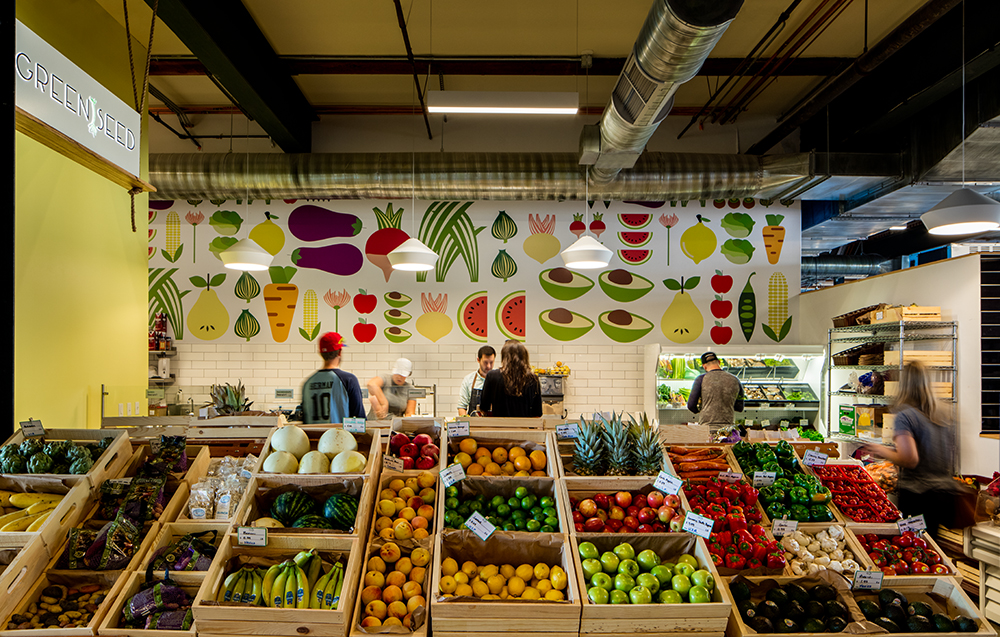 Enter Central Market, a one-stop shop that caters to those searching for anything from basic grocery items to fresh fish and charcuterie to pre-assembled grab-and-go meals. The 12,000-square-foot space opened this fall at the corner of 27th and Larimer Streets, in the same 1920s-era building that now houses the popular jazz-and-supper club Nocturne. It was conceived to serve residents in a local setting without forcing them to commute by car. Visitors are even free to wander between each of the 11 vendors with a glass of wine or cocktail in hand.

Location, however, is only half the story. Developer Ken Wolf and restaurateur Jeff Osaka worked with frequent collaborators LIVstudio to design a market that allowed individual vendors the freedom to express their own identities, while still maintaining a cohesive concept overall. Floor tiles, for instance, change throughout the project in a way that highlights individual spaces, whereas tiles in common areas more closely reflect the building’s history. That history is also represented by a striking wall graphic in the fish market. Said Brandon Anderson of LIVstudio, “We used that graphic because it’s a picture from a similar market located in downtown Denver in the 1930s. Some people have noticed that the picture contains NRA signs, which actually references the short-lived National Recovery Administration, and not the National Rifle Association.”

Designed with a modern warmth that complements the area’s industrial roots, Central Market is a new addition that celebrates our city’s history while carving out a place of its own. Said Anderson, “It provides the RiNo district with a community gathering space by utilizing the existing character of the neighborhood. It was important to create a space that didn’t feel as if it was forced into the neighborhood.”