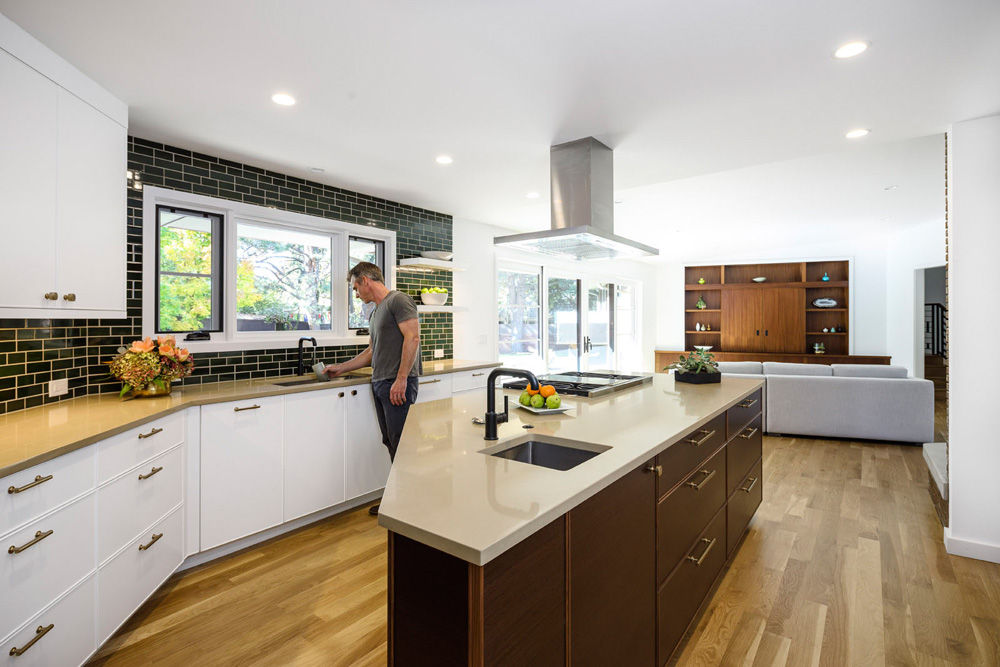 It was the bones of the 1958 mid-century home in Denver’s Hilltop neighborhood that attracted homeowners Stephen and Emily Hunter to the property, setting them on course for a complete renovation that took the home back to its original glory. Their project included designing and realizing a welcoming kitchen that celebrated mid-century details and the home’s original floor plan, while bringing it into a 21st century light.

Working in conjunction with Denver-based Thurston Kitchen & Bath, the Hunters focused on maintaining their home’s original beauty while updating it to achieve the function and feel of a more modern home. The first thing designer Tamar Chang noticed was the distinctive layout. “It was clear that we needed to keep the different angles of the house and bring them into the kitchen design,” Chang said. These odd angles are indeed celebrated in a focal point of the kitchen renovation: The island at the kitchen’s center. Homeowner Emily Hunter noted that adding a trapezoidal island to accentuate the off-kilter flow of the home’s original design was a clever way of honoring the mid-century angular floorplan of the home. 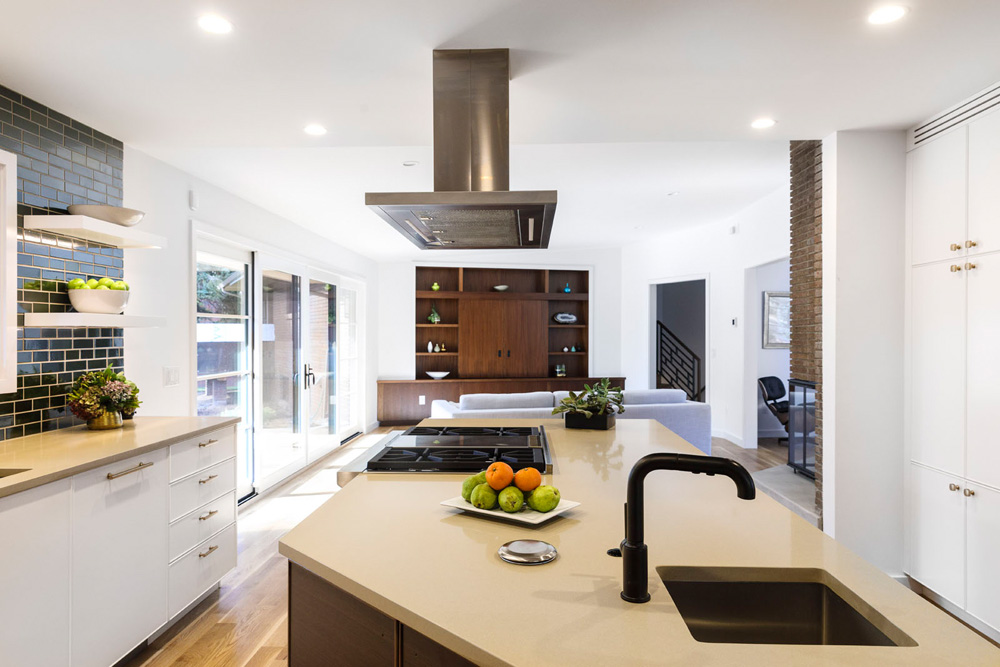 The Hunters had an unexpected tool when embarking on their Hilltop renovation — they’d found a 1961 article featuring their home in the Rocky Mountain News, three years after the home was built. The article, “Home Achieves Openness,” focused on the way the home was designed for entertaining. Said Hunter, “Though the original home wasn’t ‘open’ by today’s aesthetic, we still used this intent when approaching the kitchen.” Stephen, an architect who owns Hunter Design, removed the wall between the family room and kitchen to enhance the openness, while maintaining the interesting angularity of the home’s original floor plan. The Rocky Mountain News article, now framed in the home, also helped inform the overall home restoration process, including an homage to the original mahogany built-ins in an updated entertainment center in the renovated family room. The photos within the article also cautioned the homeowners on the type of design choices to avoid. The kitchen, for instance, originally featured turquoise cabinets and butter yellow appliances.

Instead of adopting that sort of color palette, the Hunters and Chang focused instead on tapping into elements from the mid-century modern period that make more design sense in 2016. The cabinetry in the kitchen is comprised of wenge wood, both for its warm, inviting look, and its popularity in the 1950s and ‘60s. The wenge cabinets include a walnut frame to give a distinct, two-tone look. This framing technique is also replicated on the Sub-Zero refrigerator and Wolf oven to add cohesion to the space. “One of the challenges in introducing wood finishes to the perimeter was the wall of pantry cabinets,” said Chang. “Unlike the refrigerator wall, there was no natural space to add wood, but we did not want to leave it all white. We ended up making the oven cabinet finish wood, and all other pantries white. This is an atypical decision that made the space even more special.” The painted white pantry cabinets are made of maple wood, and Chang notes that the use of wenge and painted white maple “brought interest to what could have just been a white wall.” The result is storage cabinetry that intricately balances dark and warm with bright and cool. 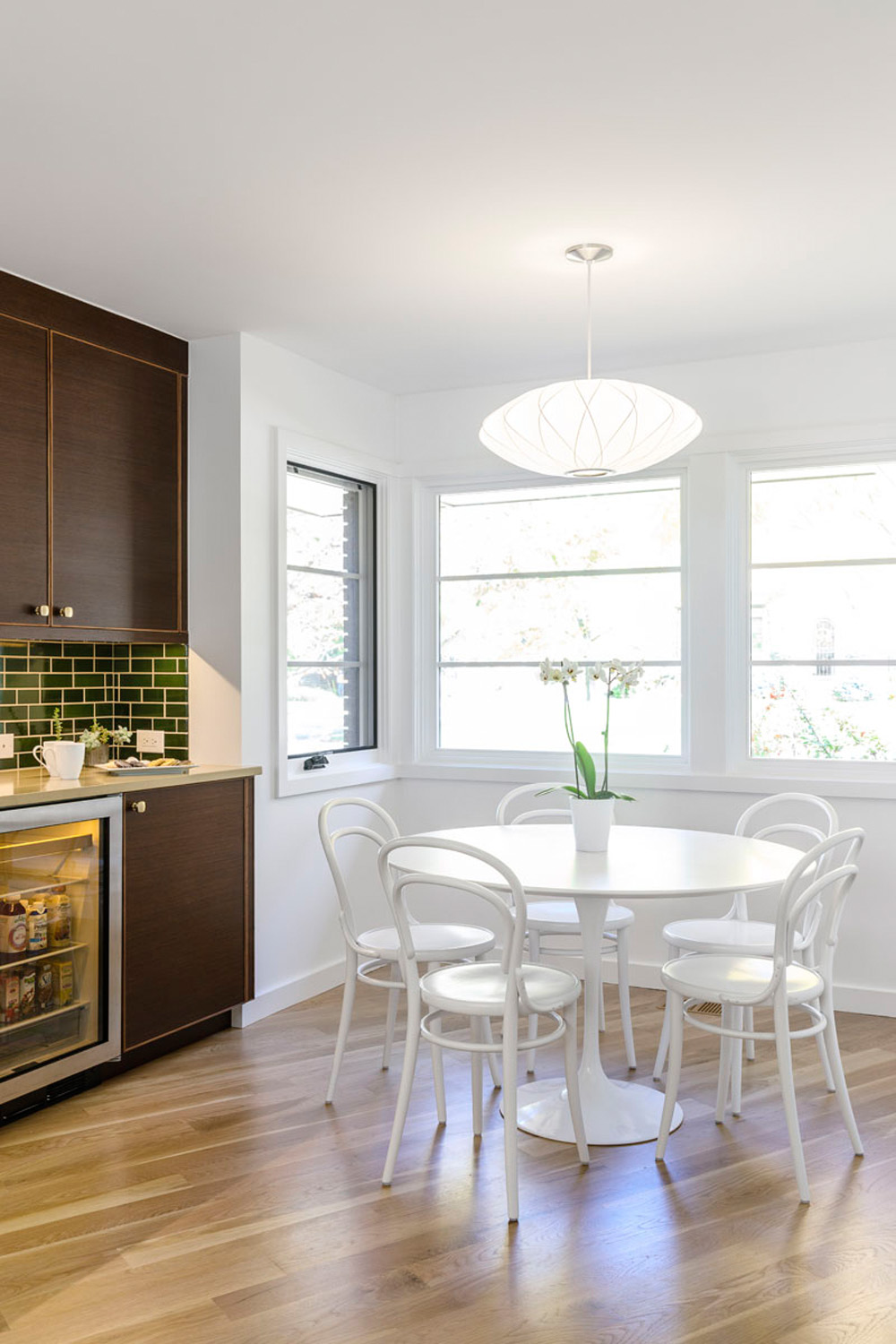 Other intricate, behind-the-scenes decisions helped maintain the space’s roots while moving them into a modern context. Chang recalls working with the white pantries, dividing the space into three doors, with each door divided into three panels for a mid-century inspired grid. But this effort soon became challenging, as removing the cabinets revealed an unsupported chimney.

Stephen Hunter added a support post between the pantries, and to save the important design choice of the mid-century grid, Chang opted for a narrow cabinet with a wide door. When closed, the pantry appears seamless, with the three doors coming together. When open, the narrow cabinet reveals itself, with a panel to shield the important chimney support. Chang says the way these pieces fit together ranks among her favorite things about the project. 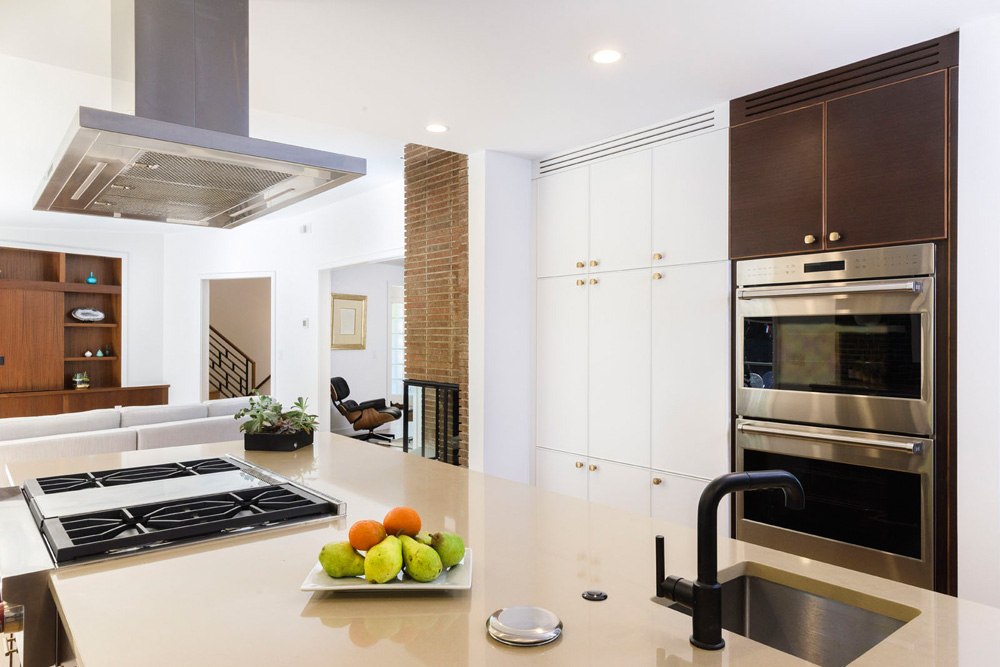 Elsewhere, atop the stunning wide plank white oak flooring there are innovative storage solutions with design choices that appear effortless — despite considerate attention to detail. The Hunters visited the Heath Tile factory showroom in Sausalito, California, where they selected period-appropriate jade tile backsplash and used a pattern to accent the strong horizontal grain in the wenge cabinets. The backsplash also echoes the pattern of the metal railing that takes guests from the first to second floors of the home. For the kitchen hardware, they passed on the brushed nickel and stainless steel that dominates contemporary kitchens and opted for the aged brass hardware from Emtek’s new Urban Modern collection, nodding to the gold tones of mid-century design. A cream-colored quartz counter meanders throughout the kitchen, matching the angularity of the kitchen’s original plan.

When pressed on what she loved most from the project, homeowner Emily Hunter said, “Our favorite components of the kitchen renovation are those that directly relate to the mid-century era.” Walking through this exquisite 2016 upgrade and feeling transported to the 1960s, it’s not hard to see why. 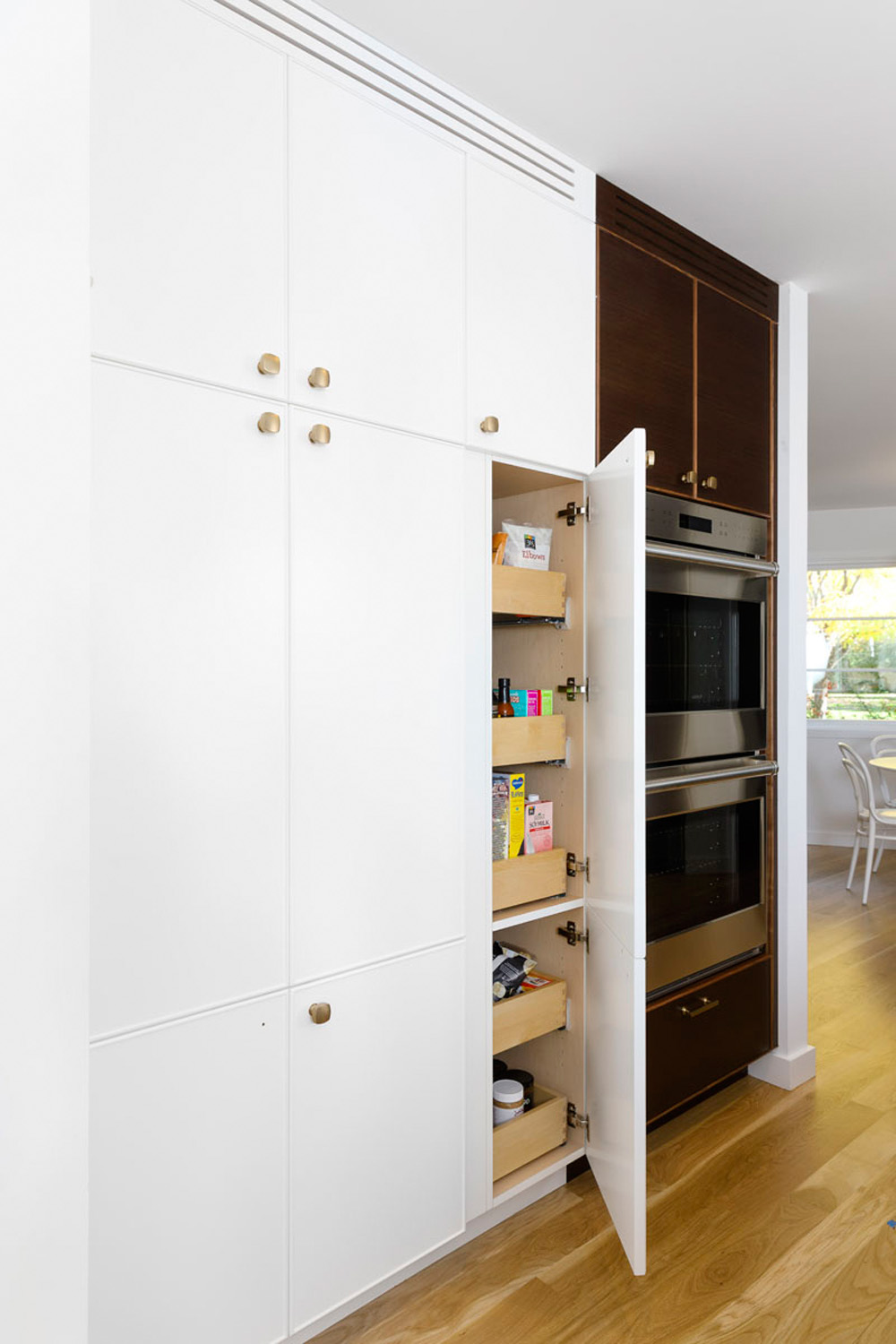