DESIGN-BUILD-FABRICATE FIRM RAW CREATIVE IS UPENDING THE NOTION OF WHAT ROLE ARCHITECTS PLAY IN THE DESIGN PROCESS. CASE IN POINT? THEIR BOLD, IMAGINATIVE WORK AT THE HOT BERKELEY RESTAURANT THE WAY BACK. 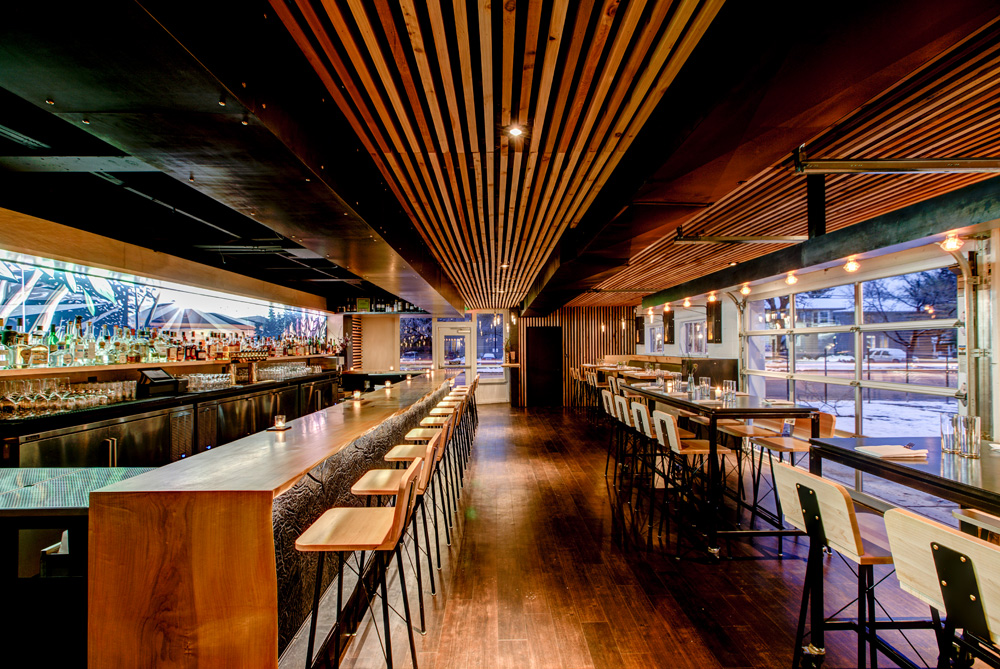 Call them perfectionists. Call them crazily ambitious. Call them control freaks. They don’t care. Blea and Breton Lujan, founders and owners of Denver’s one-stop shop Raw Creative, don’t just design spaces; they fabricate their own furniture and do all the construction, too.

Blea and Lujan met as undergraduate environmental design majors at the University of Colorado, then reconnected as architecture graduate students. While classmates were looking to land jobs at big architectural firms, Blea and Lujan opted for a different path, launching Raw Creative while still in grad school. 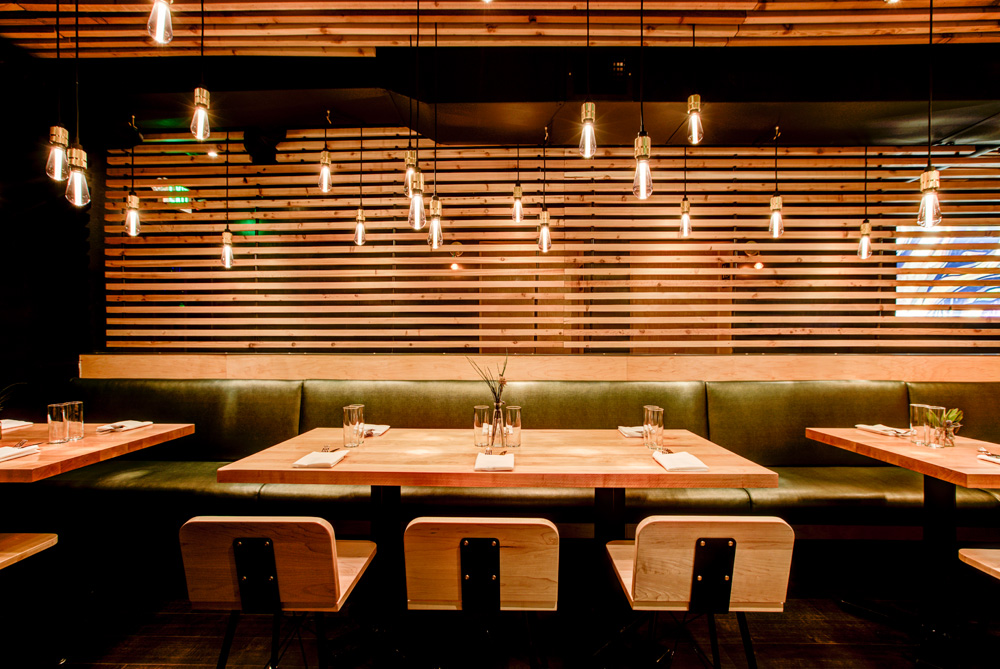 “We actually got ridiculed by some of our classmates,” said Blea. “They were like, ‘Oh that’s cute. You guys are starting your own firm.’ They didn’t really believe us.” But according to Rick Sommerfeld, Assistant Professor of Architecture at CU Denver and director of the school’s Colorado Building Workshop, the two knew what they were doing.

“It’s very unusual to do what they did, because for a long time the architect and the contractor were separated,” Sommerfeld said. “It’s only within the last 30 or 40 years that the American Institute of Architects even allowed architects to build their own projects. But Mike and Breton really wanted an intimacy with their clients, and they wanted to be able to control the details of the fixtures and furniture and building designs they came up with. It was very gutsy, but they’ve done a really nice job with their company.” 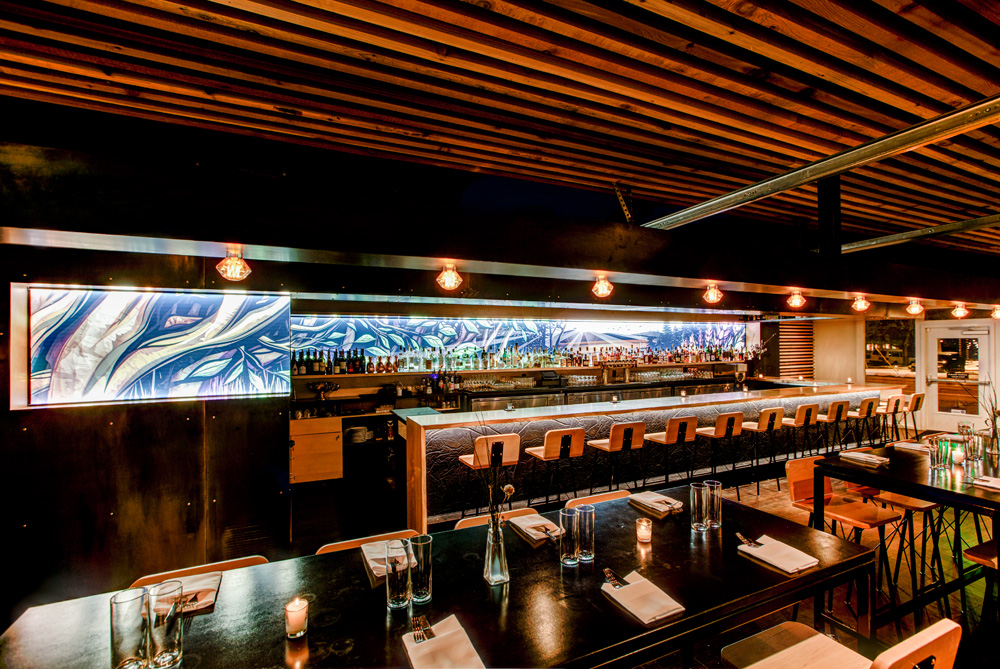 Blea and Lujan bring complementary skills to the business: Blea, whose two uncles are general contractors, “grew up on job sites” and later worked in the architectural fabrication shop at
CU, where he learned to weld and do woodworking. Lujan, on the other hand, started out as more of a pure designer. “I’m very detail oriented,” he said, “so I always want to be in control of building something.” The name Raw Creative refers to their desire to use raw materials like wood, concrete, and steel, and to find creative new ways to manipulate them— such as blackening the steel, charring the wood, or using handmade molds to make uniquely shaped and colored concrete sinks.

Since graduation, Blea and Lujan have had a steep learning curve. Through self-study and independent courses on subjects like concrete fabrication, they now share every aspect of every job, from overall design of a space to custom furniture building to the nitty-gritty of on-site construction. “It’s hard to explain to people the breadth of what we do,” said Blea. “We do all the casework, all the cabinetry, all the steel work, all the hand- mixed concrete tables and sinks.” Added Lujan: “We believe in being well-rounded. 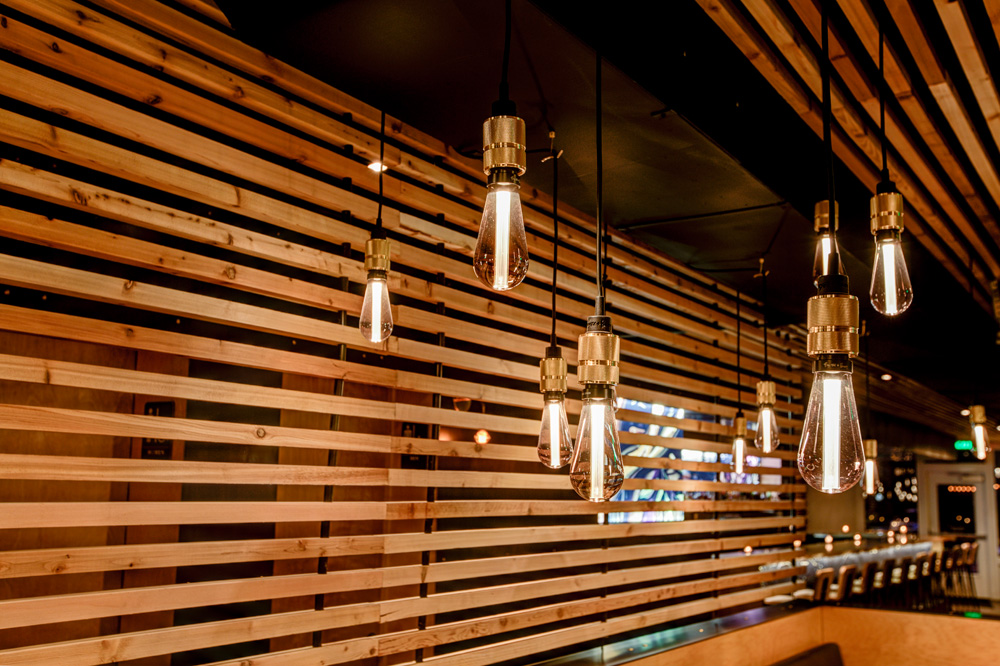 And because we are building everything ourselves, we know exactly how long it will take and how much each component will cost, so people who hire us can choose where to spend their money.”

After starting out doing kitchen remodels in grad school, the duo designed and built the patio for UNCLE, the hip ramen fusion restaurant in the Highlands, then did all the finishes (including a custom bar and concrete fabrication of tabletops) for UNCLE’s new sister restaurant in RiNo, Hop Alley. 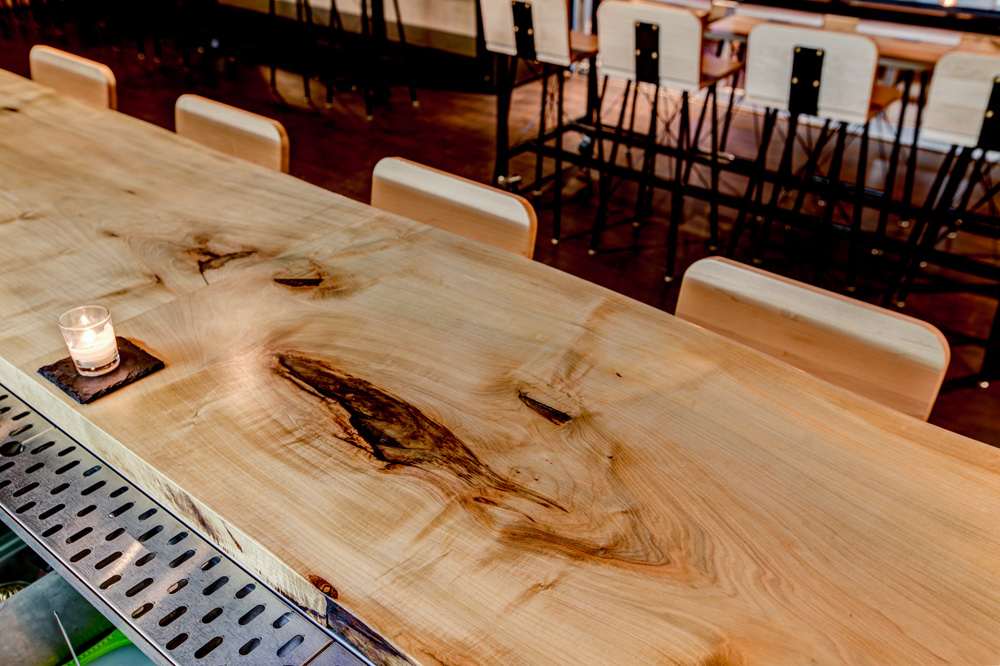 But the apotheosis of their work so far (and their first complete restaurant build) is The Way Back, a rustic-chic neighborhood eatery that opened this year on West 38th Avenue in Berkeley. “Just as the name suggests, our menu tries to pull from how things once were,” said Kade Gianinetti, one of three co- owners of the restaurant, which has already twice topped Denver Eater’s Heat Map. “I let Raw Creative have a lot of control over how the space would be laid out and the feel of the colors, and their design totally matches our concept—they balanced the use of raw materials with new technology.”

Gianinetti’s faith in the duo wasn’t blind. A childhood friend of Lujan’s, he gave Raw Creative its first work space, at his small- batch coffee company Method Roasters in Globeville, before they moved into permanent digs. He had seen enough to know these were the right designers for The Way Back, and his confidence was rewarded. “They were able to create a functional, livable design space that felt comfortable but used techniques that push the limits of sustainable building. They had the imagination to really think outside the box. Their passion for design, and pushing the limits of what it could be, was infectious.” 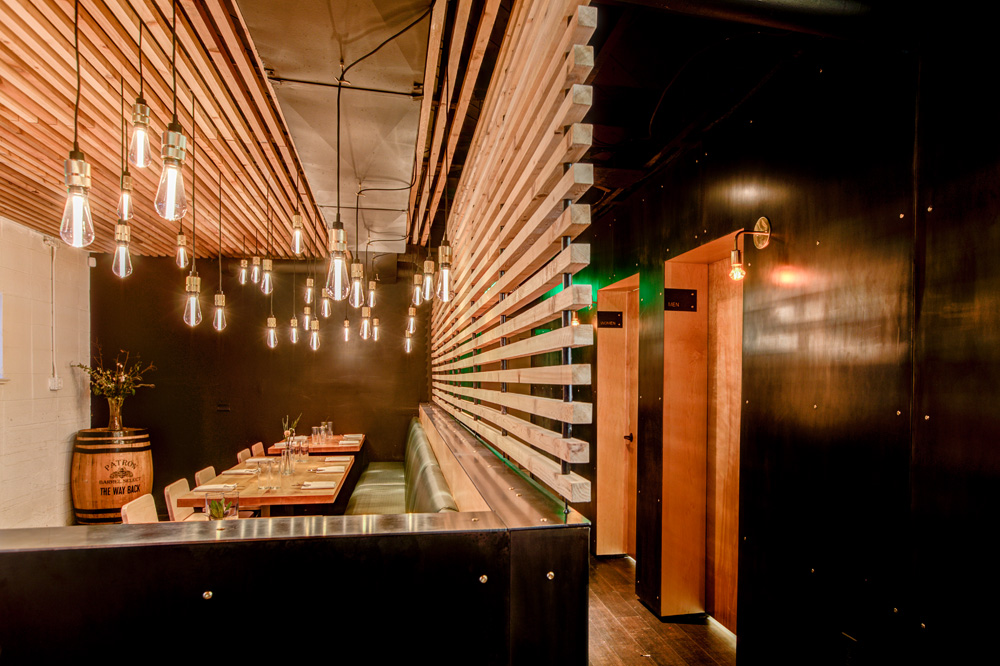 The result is a modern but rustic space that feels unique (with custom touches like a backlit, hand-drawn mural behind the bar and a textured bar front) and friendly (Gianinetti says that guests often want to linger for hours in the inviting spaces). And, as with all of Raw Creative’s work, The Way Back was a totally hands-on project. “We’d be there at 6 o’clock in the morning, and stay until 10 at night, doing all the framing, installing sinks we had built— everything,” said Lujan. “I was out here in a Bobcat one day building the rock wall around the patio. And then we also built all the interior pieces,” including the maple-and-steel bar stools, concrete-topped tables, cast-concrete bathroom sinks, and raw, industrial- looking lighting fixtures.

“I think what makes us successful as a team is our collaboration,” said Lujan. “We each have a different perspective on design. We’ll start bouncing thoughts back and forth, and watch as an idea grows quickly and organically. The result is that the design just gets better and better.”