The final entry of our 2016 fall issue, One Last Thing, cast the spotlight on a curiously dynamic ping pong table in Vertical Arts Architecture’s new Denver office. The table was created using a technique called electrical erosion, which entails the channeling of electric currents through wood. People took notice. By popular demand, here’s a more detailed visualization of the electrical erosion process. Don’t try this at home. 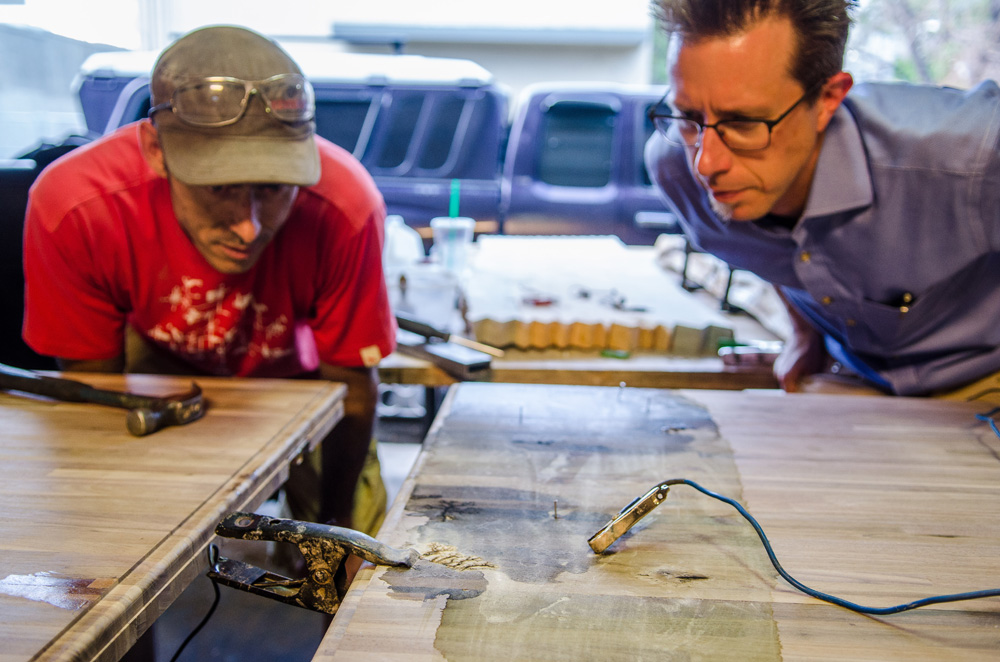 James Davis (of the aptly named James Davis Designs, above left) had been making furniture for years, but for the past six months had been increasingly focused on something called electrical erosion. So, too, had Brian Patty (right), Lead Architect for Vertical Arts.

Patty was in the process of moving his team into new offices on Speer Boulevard, and he was in the market for a multi-use table. When the two met at a neighborhood networking event, sparks flew—metaphorically speaking. They began trading email, gradually settling on the design for a custom ping pong table that could also serve as a conference table or breakout space.

Beginning with a walnut butcher block, Davis concocted a solution of salt water and baking soda, which he brushed carefully across the face of the table in what he calls a “loosely governed pattern.” (In this case, loosely governed translates to this may or may not go where it’s supposed to.)

After giving the table time to absorb the solution, microwave transformers were introduced. By attaching a clamp to a series of microwave transformers, the charge was elevated from 120 volts to more than 15,000. This created a fire which could be gently coaxed, more or less, in one direction or another by the continued application of the salt water-baking soda solution. “As I’m about ready to turn it on and start a pattern,” said Davis, “I’ll brush a pattern where I think it should go. But then there’s the process of spraying down the erosion as it happens. There are flames that come up as it goes, and you watch it happen where the electricity is coming out of the wood.”

Once the electrical erosion was complete, Davis coated it with wax and epoxy and sanded it down, leaving a smooth surface atop the fire-lit design.

Said Patty, “It’s hard to stop with designs like this. We start asking ourselves, ‘What if we take some of these design areas and blast out the debris, and what if we start running high color epoxies so you can see it more and change the finishes up?’ It’s got so many places to go without overkill. And the process is exciting and inviting because you can’t quite predict it. You can force it to a certain extent, but at some point it sort of does what it wants. It just invites people into the process.”