FORT COLLINS-BASED OTTERBOX COULD EASILY HAVE LOOKED OUTWARD TO DESIGN A NEW BUILDING FOR THE CREATIVE TEAMS WHO DEVELOP ITS PRODUCTS. INSTEAD, OTTERBOX RELIED ON INHOUSE TALENT AND A CORE UNDERSTANDING OF ITS OWN BRAND TO MANAGE THE OBSTACLES OF EXPONENTIAL GROWTH. 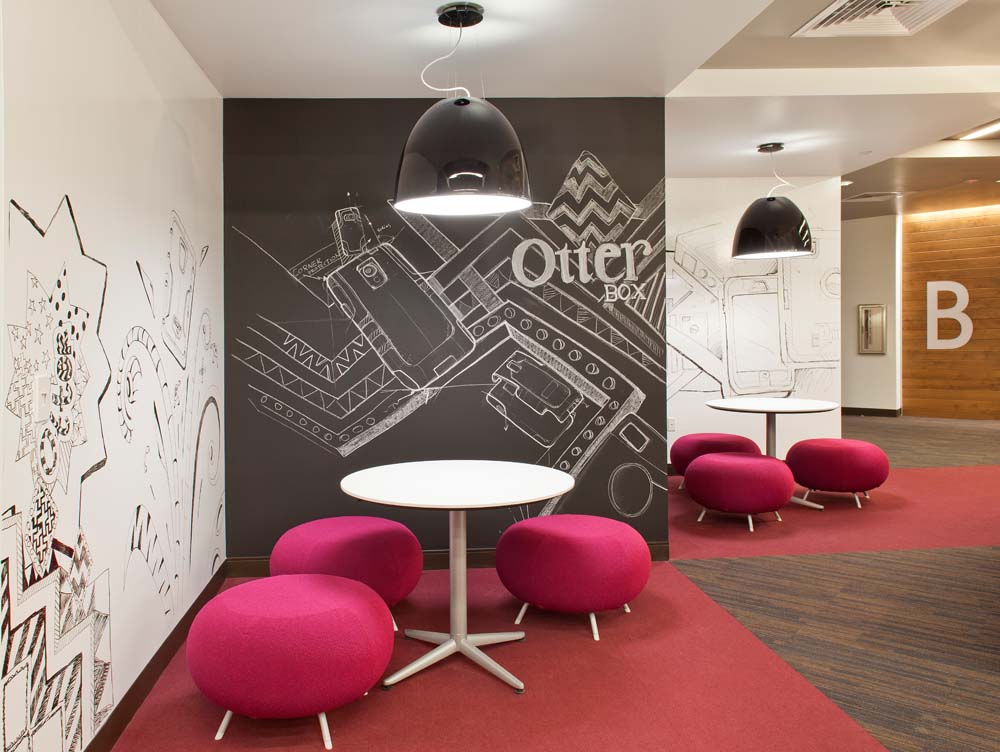 Perhaps no backstory better defines the modern entrepreneurial dream than a young upstart launching a risky venture from the dusty confines of their own garage. It’s a narrative that applies to some of the great home-grown businesses of the era, from Disney to Hewlett-Packard to Apple. There’s a romantic quality to the rags-to-riches story, but telling it in just two parts—first there were rags, later there were riches—tends to obscure the hard work that takes place in between, where success begets growth, and growth begets a whole slew of unforeseen challenges. 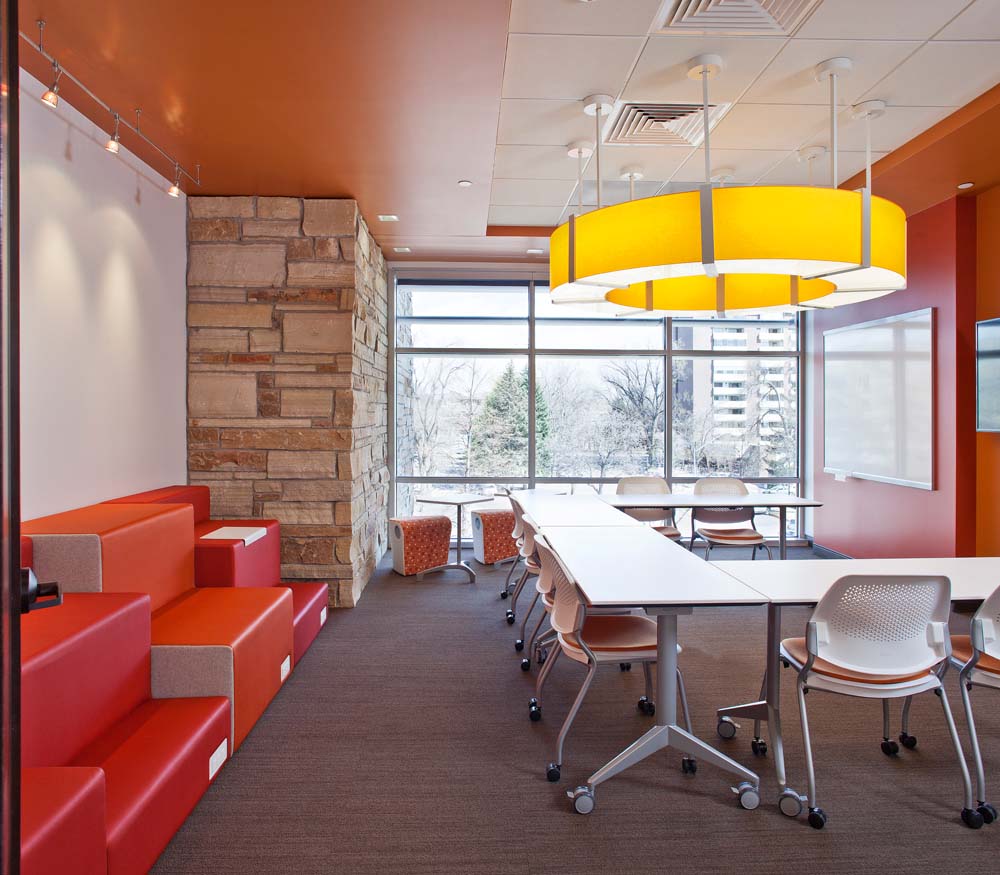 Indeed, history is littered with defunct businesses who failed to navigate the minefield of success, often because rapid growth leads to a looser grip on corporate identity. Companies strike it rich, they expand, and they forget who they are. New employees don’t fit quite the same. New facilities don’t reinforce the foundational principles upon which success was forged in the first place. 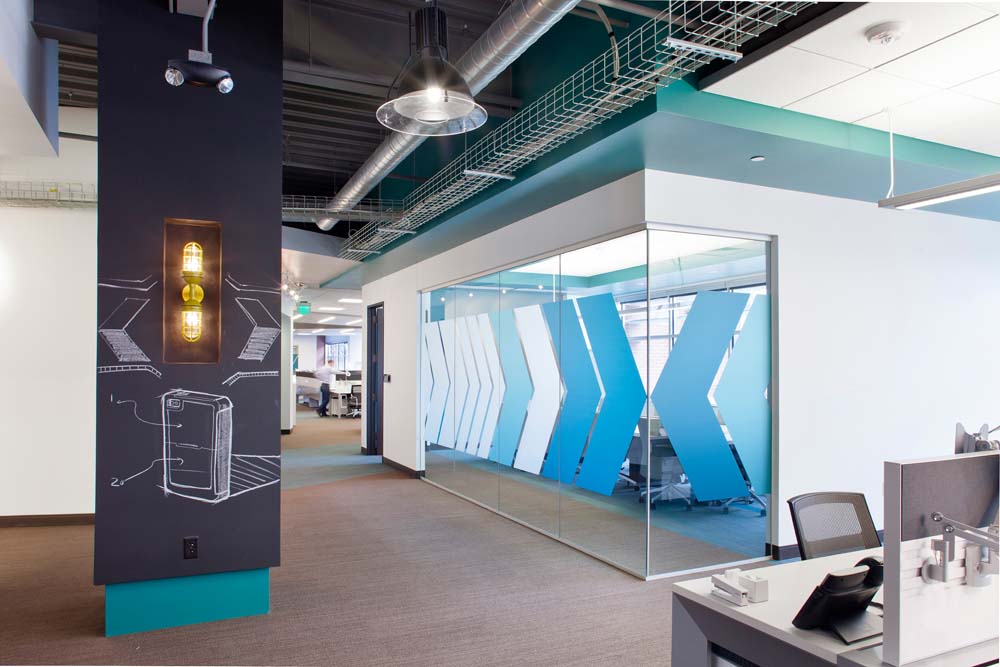 Once upon a time Curt Richardson founded OtterBox in his Fort Collins garage, and as recently as 2009, the protective case manufacturer was a firm of just 70 employees. Now they’re up to more than 1,000, with offices in exotic locales like Ireland and Hong Kong. But most of their team remains in the northern Colorado town where it all began, in a series of buildings along a quiet tree-lined street just blocks from downtown. The newest addition to campus, a five-story building that houses primarily engineers otherwise known as the minds who design and develop OtterBox products—goes a long way toward reinforcing Otter’s own brand integrity. Here is an experiential building to match a company that makes experiential products.

Housing primarily engineers—otherwise known as the minds who design and develop OtterBox products—the Canyon Place facility is meant to evoke and support creativity. Nancy Richardson, who co-founded Blue Ocean Enterprises (which is the parent company of OtterBox and manages a handful of related companies) with husband Curt, is an interior designer by trade and was the driving force behind the Canyon Place project. At every turn, her attention to detail is apparent. “Whether or not people consciously recognize it,” she said, “interiors have a huge impact on mood, motivation, innovation, and aligning with and supporting culture.” 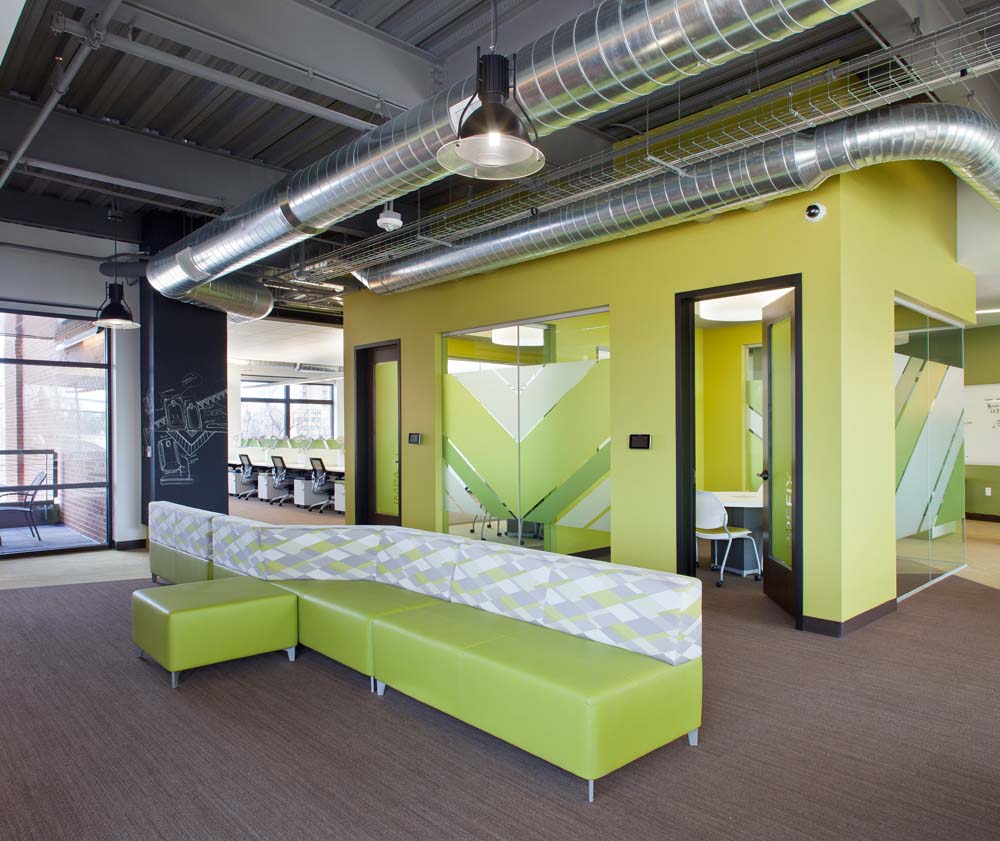 To that end, Nancy and her Blue Ocean design team left no stone unturned during their 14-month design process. They interviewed staff from every department, asking pointed questions about work flow, peer interaction, and spatial requirements. They found clever ways to integrate core elements of OtterBox’s culture into interior decisions big and small. And, ever mindful of the brand’s growth trajectory, they took great care to craft open, adaptable spaces that wouldn’t be rendered obsolete by new staff or restructured departments. “The most important thing for us to do as designers is to ask a lot of questions, and listen,” said Laura Arledge, Lead Interior Designer for Blue Ocean. Each floor of the five-story building is color-coded, with a particular emphasis on the recognizable blacks and yellows that permeate OtterBox’s logo and products. 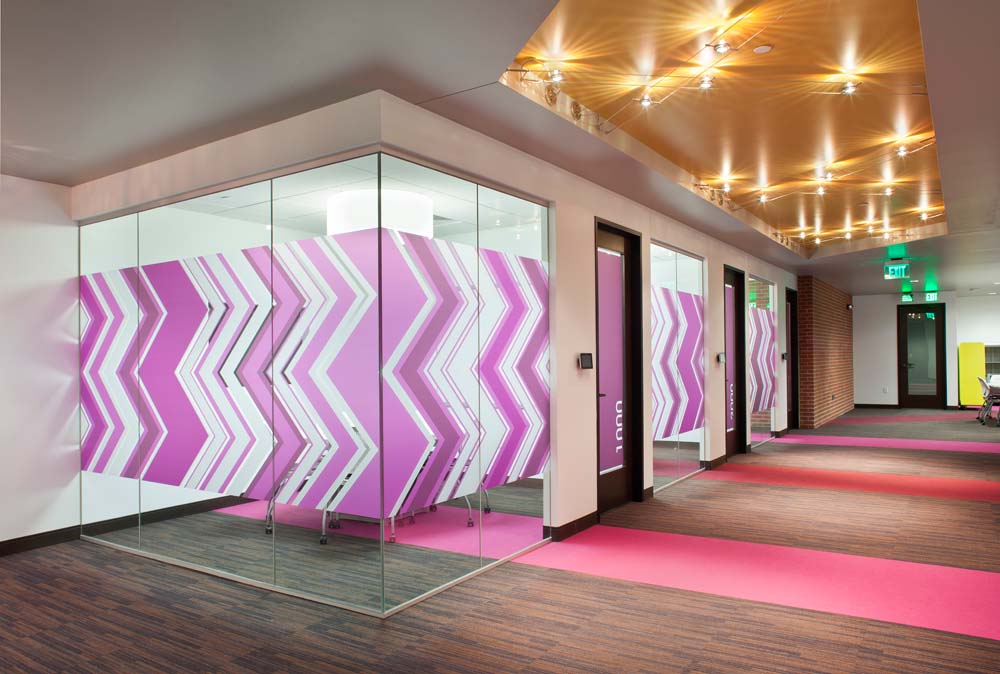 The open work spaces feature flexible seating along 20-foot Steelcase Strike benching solutions, with enough leg room to avoid knocking knees with coworkers. There are no fully private offices, but there are 18 conference/meeting rooms and a handful of open seating areas for every department. (In an effort to retain some openness while still providing a measure of protection for the sometimes-secretive work that goes on inside, all conference rooms feature thoughtfully placed designs along the exterior glass. Like much of the building’s decor, these designs are based on the tessellations and puzzles that define the engineers who work here. They also manage to obscure just enough of an outside viewer’s perspective to prevent prying eyes from gleaning any proprietary information scribbled on whiteboards.)

Conference rooms, however, are not the only places where tessellations and whiteboards play a prominent role. Throughout, parallels between carpet and ceiling patterns are subtly matched. Walls are angled in unusual and unexpected ways. Here and there, lighting tracks are recessed in a sly nod to the positive and negative forces governing the high-level mathematical concepts upon which OtterBox products are engineered. To marry storage needs with impromptu collaboration spaces, back-painted magnetic Clarus glass board panels were placed on a Raumplus sliding track system, concealing built-in cubby holes. The result: functional white boards that double as a home for the hundreds of prototype storage cases, which were once stacked haphazardly in boxes and splayed across desks. 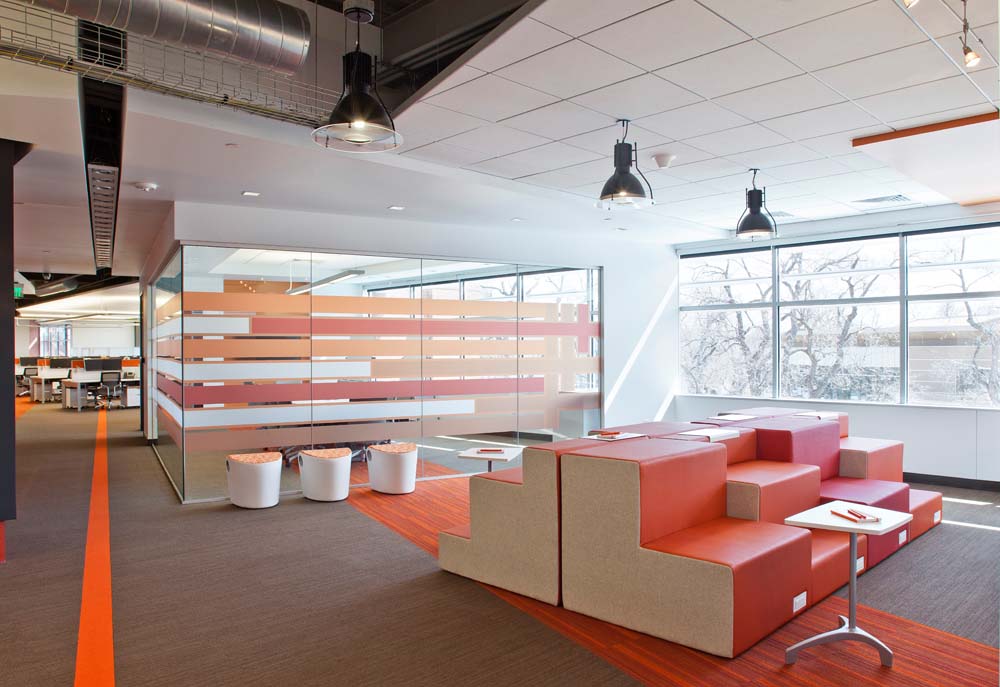 These subtle design details are complemented by more overt choices that speak directly to the sort of person who works for OtterBox—generally speaking, active and educated young people who thrive in a fast-paced environment. There are coffee bars on every floor and a latte machine in the lobby. There’s a treadmill desk just steps the lobby. A dedicated private room for nursing mothers. A ping pong table in the basement where staffers host regular tournaments.

And 500 square feet of indoor bike parking, complete with a garage door included to remind everyone, Curt and Nancy Richardson included, that this whole thing started humbly, in a garage, not so long ago. “It’s like a home-cooked meal from a top-notch chef,” said Arledge. “It’s the act of putting thought behind something that is essential. Someone who really cares is going to think about your allergies, preferences, the way you like something prepared. Then they’ll combine the artful presentation with the technicality and quality of the ingredients. And that’s how we want people to feel here. It’s how you should feel in any well-designed space.” Predicting the future for any business is a murky endeavor best left to pundits and soothsayers. 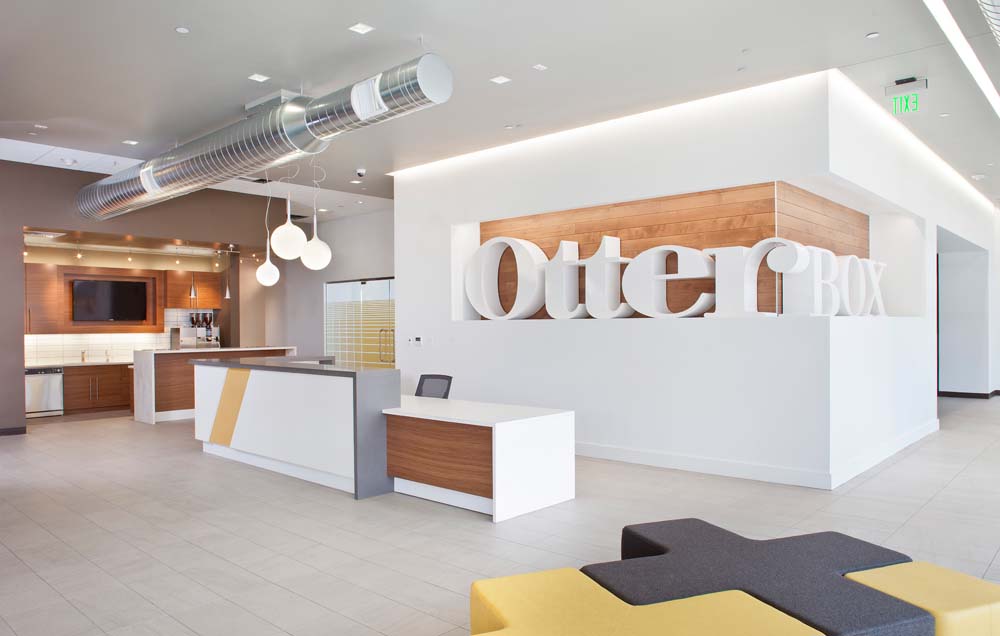 Nevertheless, with a continued focus on product development and accolades from organizations like IIDA, ASID, and Great Place to Work Institute, there’s little doubt OtterBox has risen to meet the challenges of exponential growth. Rather than drifting away from the corporate identity that defines their brand, they leaned confidently into it. From the homey confines of their executive offices to the creative openness of the Canyon Place facility, here is a company that knows what (and who) it really is. And that’s a recipe for success in any era.