THE KEY SAVINGS AND LOAN ASSOCIATION BUILDING IS A COLORADO TREASURE AND AN ENDURING EXAMPLE OF MID– CENTURY MODERN DESIGN. THE MAN BEHIND THE FAMOUS SPACESHIP BANK ON SOUTH BROADWAY IS CHARLES DEATON. HALF A CENTURY LATER, HIS WORK REMAINS AS VITAL AND INFLUENTIAL AS EVER.

The building rests along a stretch of South Broadway in Englewood, an unassuming but iconic structure—part of the landscape’s fabric after so many decades but still as eye-catching as the day it first appeared. The raw dimensions tell a muted version of the story: two floors, 32 feet of total height, and 10,000 square feet of interior space. More immediately visible are the dramatic flourishes: its asymmetrical ovoid shape punctuated by three distinct openings in the upper body, including a two-story niche that houses the main entrance. To the uninitiated passerby, the whole thing looks a little like a spaceship. But much like the man who designed it, the Key Savings and Loan Association building is immeasurably more than the sum of its eclectic parts. 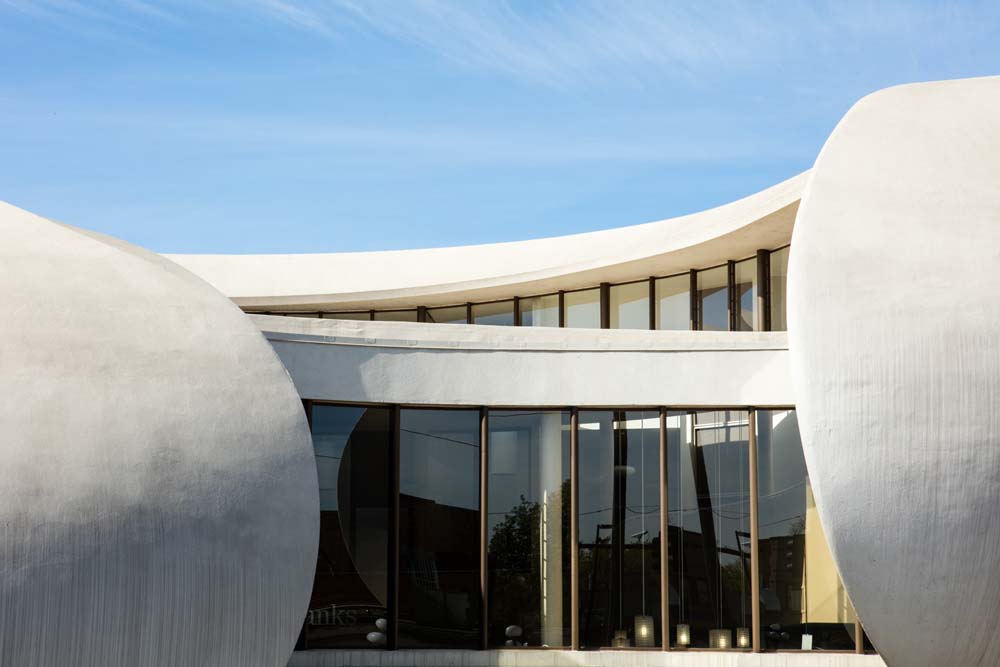 Charles Deaton was not a Colorado native, but he is the architect behind two of our most historically significant structures—which ranks him among the most important designers in state history. He led a colorful life, beginning with the sort of impoverished Depression-era childhood (including years spent living in a tent on the Oklahoma prairie) that borders on romantic when viewed from a safe distance. The son of a geologist and a painter, Deaton reflected both the artistic and scientific talents of his parents throughout his life. Unable to afford college, he invented a board game and found work as a commercial artist while still a teenager. When World War II hit, he worked at a Lockheed aircraft plant in California, transforming sheet metal into aerodynamic shapes through high-level engineering. And later, with no formal training whatsoever, Deaton moved to New York and began an architectural career that would take him to St. Louis and, eventually, Denver. 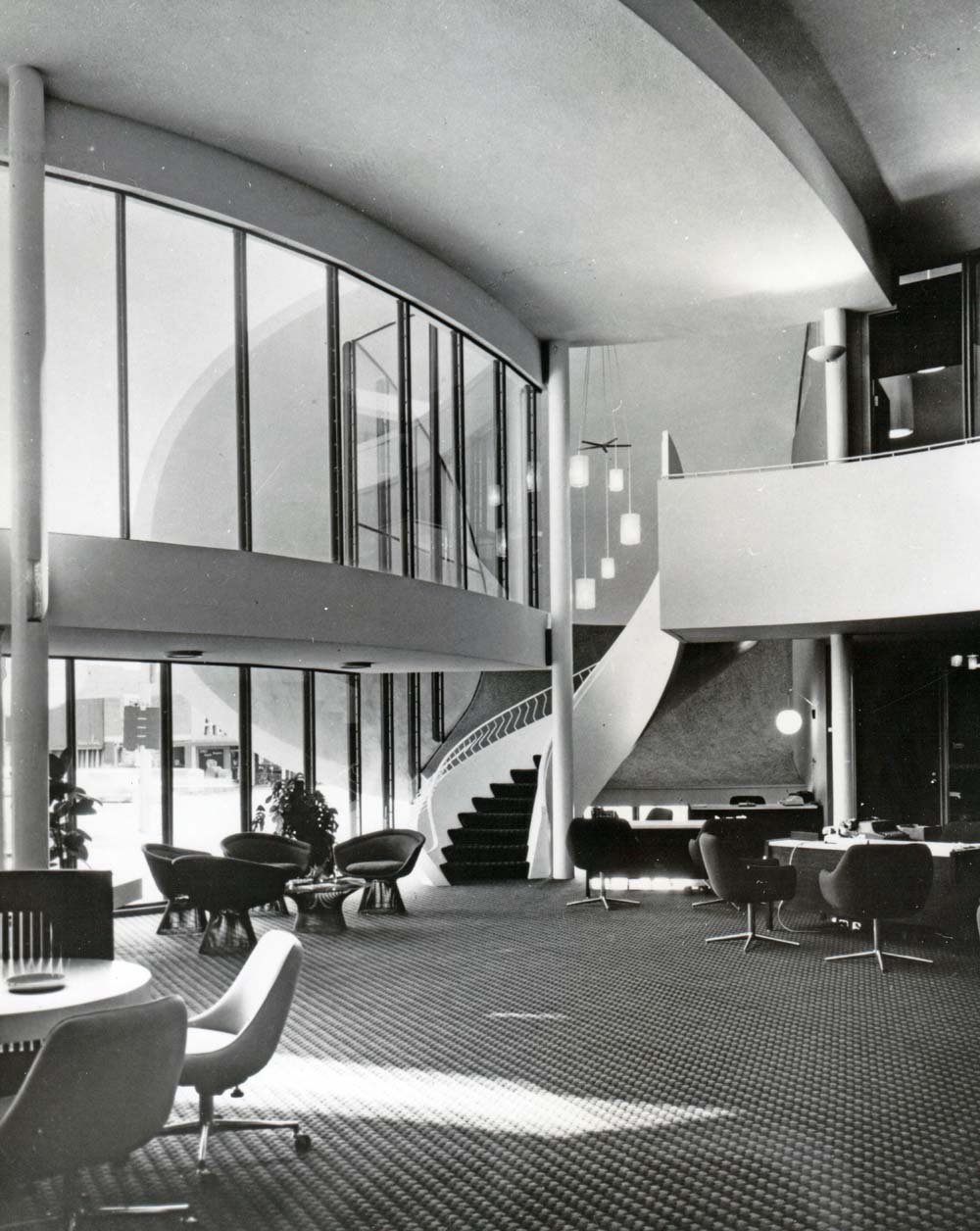 What a career it turned out to be. Deaton gave life to the Wyoming National Bank in Casper (for which he also designed the vaults, security mechanisms, office furniture, and lighting system); the Sculptured House in Genesee (widely known as the Sleeper House for its prominent place in the classic 1973 Woody Allen film); and the Harry S Truman Sports Complex in Kansas City (home to Arrowhead Stadium and the NFL’s Kansas City Chiefs). He designed a number of high-profile projects that were never built, including properties in Colorado, California, Florida, and Saudi Arabia. At the time of his death in 1996, he also held more than 50 U.S. patents. 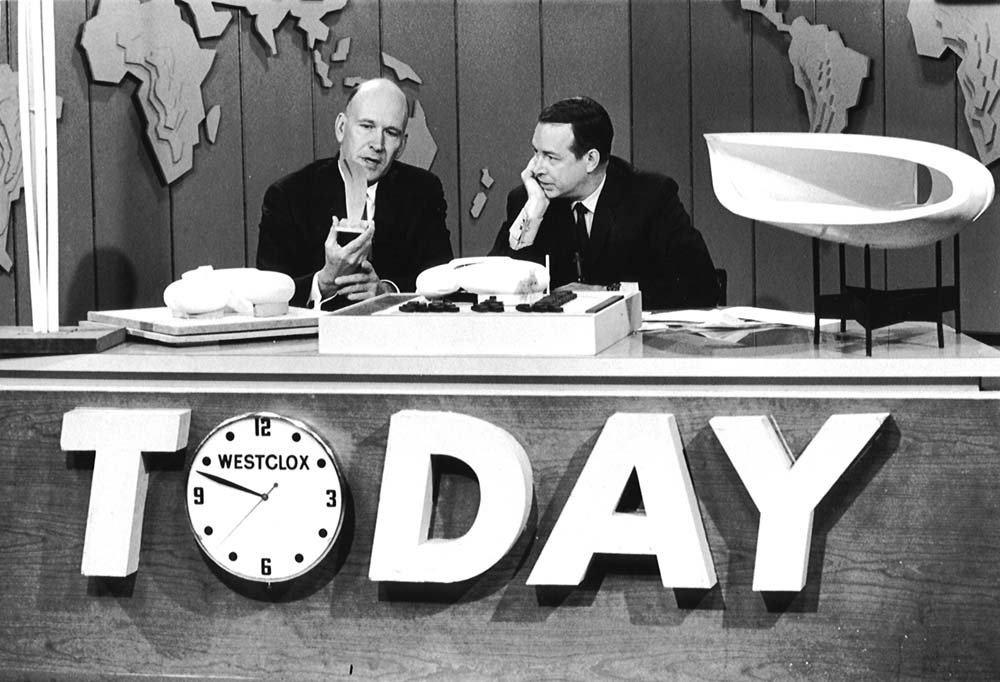 “Whether commercial or residential, everything he did was informed by this understanding of elliptical geometry,” said Nicholas Antonopoulos, Principal and Head Designer of praXarc, who as a young man worked with Deaton and later became his son-in-law. “If you look at these structures, they just look right. The geometry is true.”

Perhaps the best example of Deaton’s extraordinary grasp of form is the Key Savings and Loan Association building, completed in 1967. Now home to Community Banks of Colorado, its exterior features concrete pumped over the surface to a depth of three inches. It was then hand-troweled to a depth of six to nine inches. When this concrete layer was considered perfect, a final surface sealant was applied. The shape is pure Deaton: fluid but not arbitrary, organic but not amorphous. The building embodies some of the greatest virtues of mid-century Sculptural Expressionism while also managing to incorporate the proper scale and functionality that eluded so many of that movement’s earliest practitioners. “He loved the organic forms in nature and the beautiful mathematical symmetries,” said Deaton’s daughter, Charlee, “and not what people call ‘organic’ projects that are really just sculptural design.” 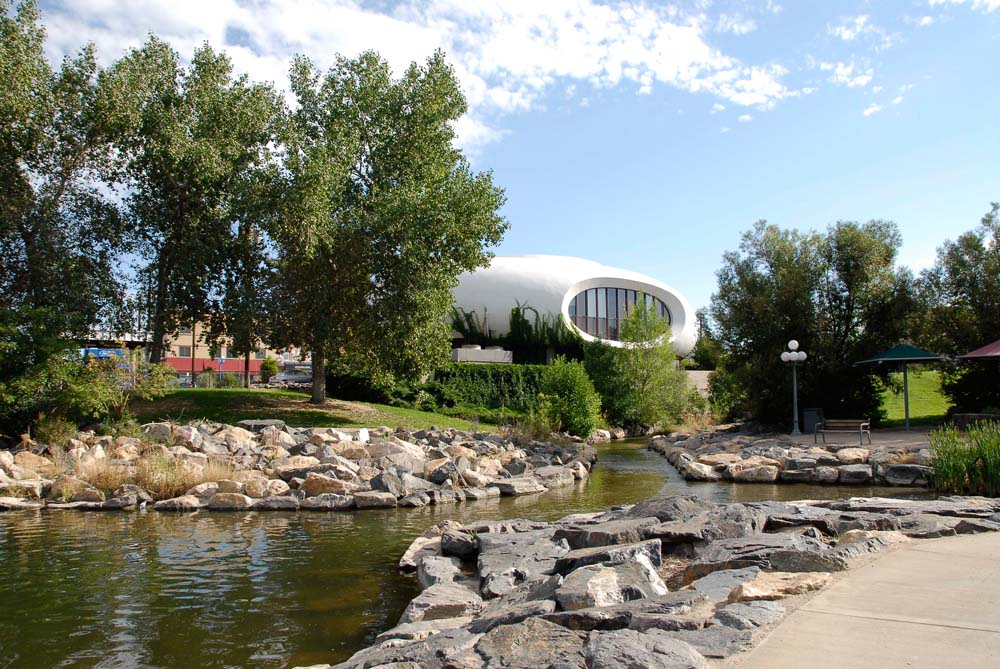 His distinctive style can partially be traced to lineage (scientist father plus artist mother), to professional experience (commercial artist plus aviation worker plus architect), and to his travels (Deaton himself pointed to Carlsbad Caverns and Mesa Verde as influences on his rejection of rectilinear tradition). But credit also his unorthodox design approach. Rather than beginning with drawings and working his way to models, Deaton inverted the process by starting with sculptures. According to historic preservation expert Diane Wray Tomasso, this was the antithesis of the field’s accepted practice. “He would model figures of different sizes and place them within his sculptures to determine the final scale of the building in relation to the human form. At Key Savings, this approach created a remarkable feeling of intimacy.” 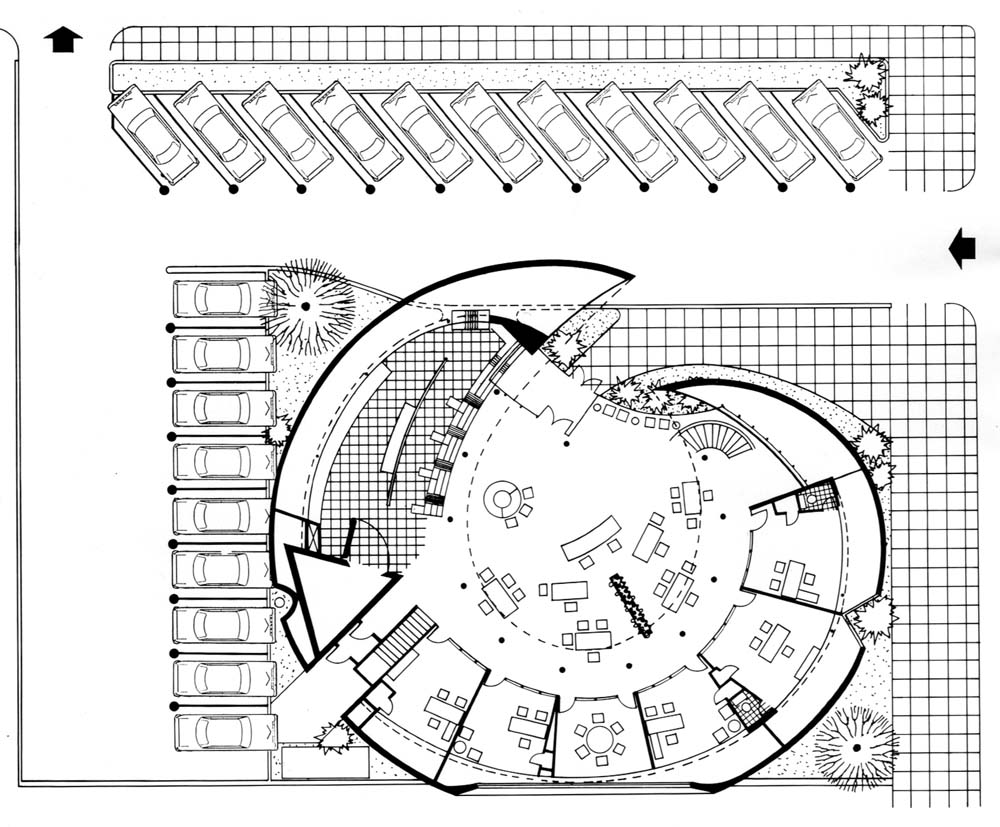 To be sure, the public’s initial reception of the Key Savings building was divided. “People were horrified, like he must be a kook or something,” said Charlee. “But he was so far ahead of his time.” And while there may have been a large contingent of puzzled onlookers, many of Deaton’s contemporaries in the architectural and artistic communities recognized his greatness. His work was the subject of magazine and journal articles, was featured in an exhibition at the Museum of Modern Art in New York, and led to jobs designing even bigger, more ambitious projects. In 1969, he was presented with the Horatio Alger Award, a prestigious distinction that holds him in the company of luminaries like Buzz Aldrin, Maya Angelou, and Dwight Eisenhower, among others.

Here in Colorado, Deaton is not exactly a household name, but his legacy can hardly be overstated. The Key Savings building is among the most recognizable structures for hundreds of miles—a genuine Colorado historic treasure. Add to that the Sculptured House, the Wyoming National Bank, and the Truman Sports Complex, and the picture emerges of a man whose singular work accounts for some of the most beloved commercial, residential, and public architecture of the 20th century. That is an extraordinarily broad range of work—fitting for a man with such an extraordinarily broad range of talents, interests, and personal dynamics. 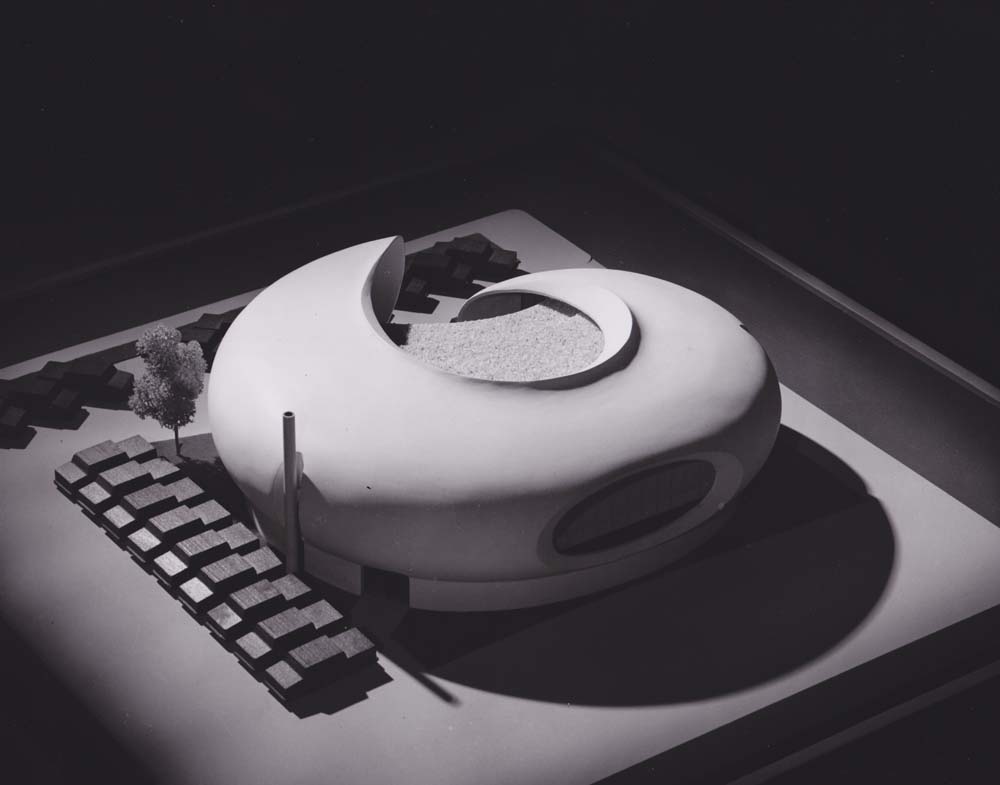 “He was beautifully articulate and so intelligent,” said Charlee. “But the people he really loved engaging with were the engineers, the workers, the professional contractors. I think because of his background, that’s where he felt more comfortable.” Perhaps it was that ability to connect so directly with the people who brought his designs to life that helped contribute to their beauty—and their timelessness. The Key Savings building, in particular, has only grown in stature over the decades, and it stands as a shining example of not only Colorado’s Modernist history, but of the defining (and exhilarating) characteristics of post-war Expressionist design. Not bad for a self-taught architect with a background in airplanes and board games.