THE FLOUR MILL LOFTS APPEAR IN SEVERAL CHAPTERS OF DENVER’S ECLECTIC HISTORY. UPDATING A LUXURY RESIDENCE WAS AN OPPORTUNITY TO EMBRACE THE PAST WHILE FOCUSING ON WHAT LIES AHEAD. 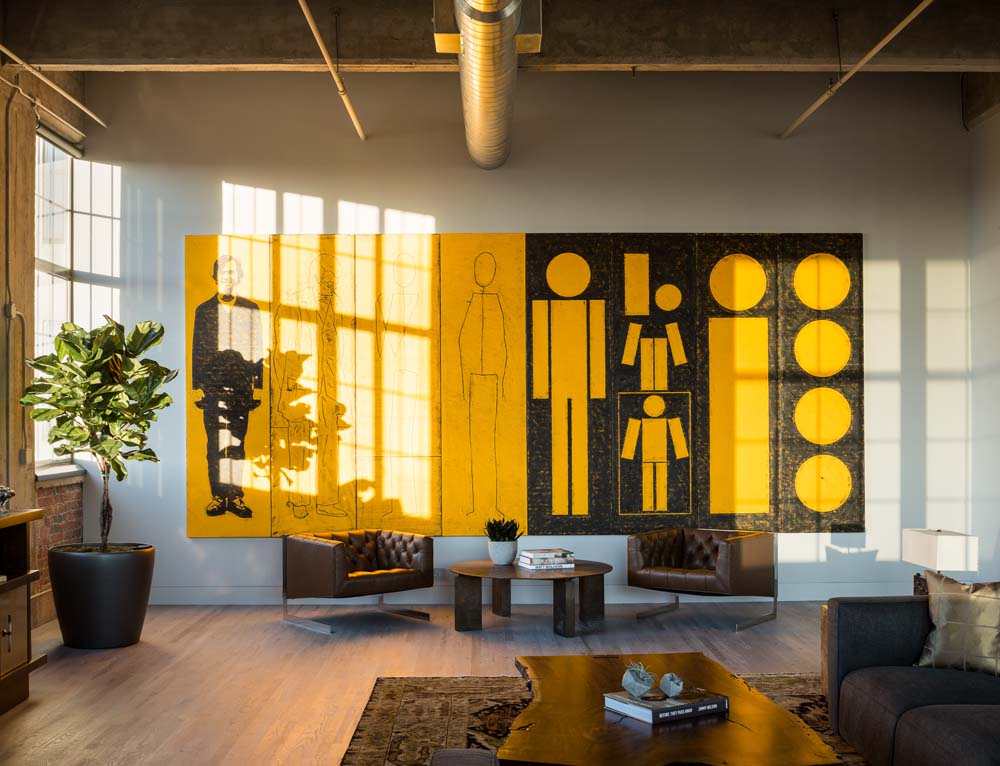 It may not show up in history books, but Dana Crawford’s renovation of the Flour Mill Lofts on Little Raven Street in the late 1990s was an important moment for Colorado. It offered both a glimpse into Denver’s past and a preview of what was to come. Nearly 20 years later, the building remains a treasured property in the Mile High City—as well as a highly coveted address. But even as one Flour Mill unit takes a further leap into the present, the foundational history is front and center.

Though it’s hard to fathom now, the areas in and around Denver’s historic Lower Downtown neighborhood were a desolate wasteland for much of the 20th century. Home to dozens of original warehouse structures, the area was a casualty of the push and-pull of the 1980s oil boom and the bust that followed, where nearly 20 percent of structures were demolished and many others were vacant and boarded up. Visit today’s Larimer Square—with its cheerful canopy of string lights, umbrella-covered patios, and award-winning restaurants (not to mention a high-end dog boutique and gourmet popcorn shop)—and it’s hard to believe that most of downtown was considered a skid row only 30 years ago. 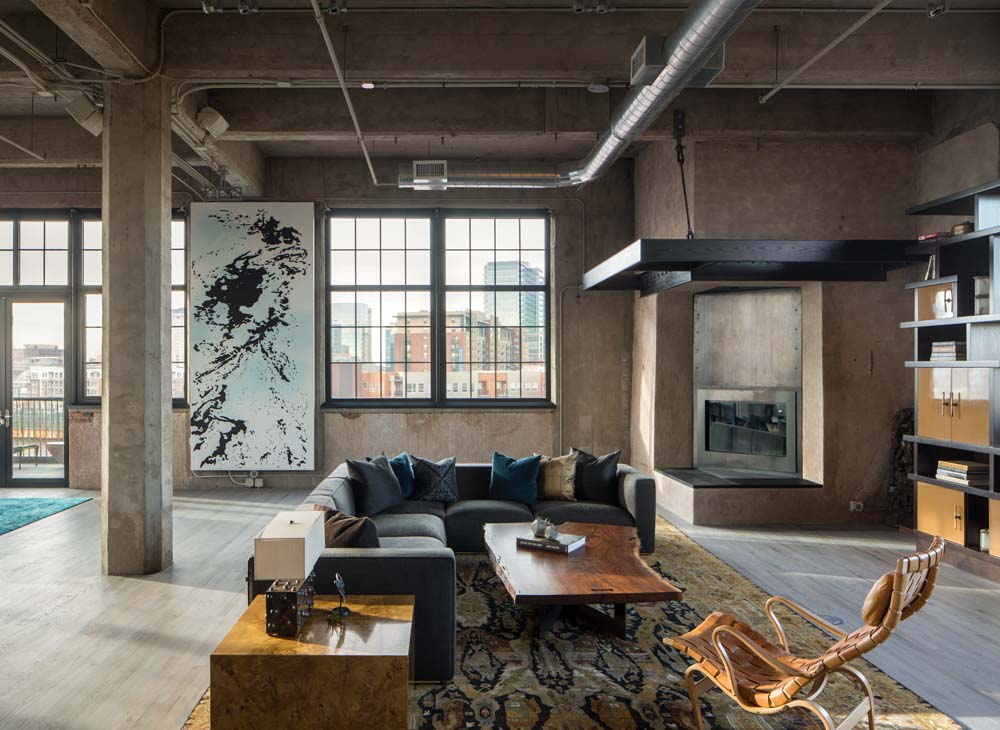 After gaining historical designation in the late 1980s, the shift toward revitalization began. Instead of tearing down historic buildings, developers transformed them into modern offices, apartments, eateries, and shops. A thoughtfully designed Coors Field joined the fray in 1995, creating a new focal point on Blake Street, and esteemed developer and preservationist Crawford—who in the 1960s worked tirelessly to save the 1400 block of Larimer (now the very same block that hosts the gourmet popcorn shop!)—was a key figure in Denver’s bold renaissance.

Resting on a largely undeveloped stretch of greenery between the western edge of downtown and I-25 (beside the City of Cuernavaca Park and overlooking the South Platte River), the aptly named Flour Mill Lofts were first used to store and process Colorado’s wheat. Built in the 1920s, the Pride of the Rockies flour mill was a working facility for 40 years. The building was ultimately abandoned, and it remained empty (although largely intact) for decades until Crawford, on the cusp of the new millennium, transformed it into high-end condominiums. At the center of the downtown development boom, this renovation reimagined the potential of Denver’s industrial buildings, inspiring a proliferation of loft-style housing that now dominates much of the residential landscape downtown. 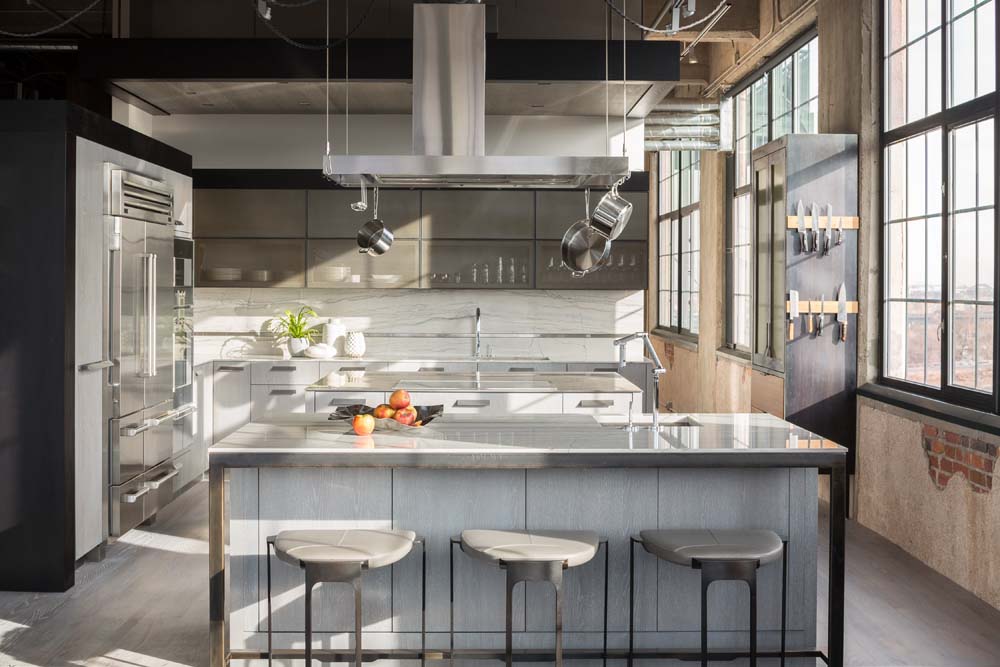 Now listed on the National Register of Historic Buildings, the Flour Mill Lofts consist of 47 units in two side-by-side buildings: the 1920 structure, first renovated in 1998 and still home to the original mill and three grain silos, and a newer addition completed in 2000. Both buildings also contain state-of-the-art, low-emission glass designed to match the historic scale and proportions of the existing windows, as well as acoustically insulated walls. With little nearby to block sight lines, nearly every unit has breathtaking views of the city, the mountains, or both.

For one Flour Mill Lofts homeowner looking to spruce up his unit, what began as a hunt for new furniture morphed into a complete remodel of the 3,000-square-foot space. With the help of local architect David Robb and Chicago-based interior designer Jennie Bishop, the loft was transformed into an open space that celebrates its historic traditions while bringing it forward into a completely new era. 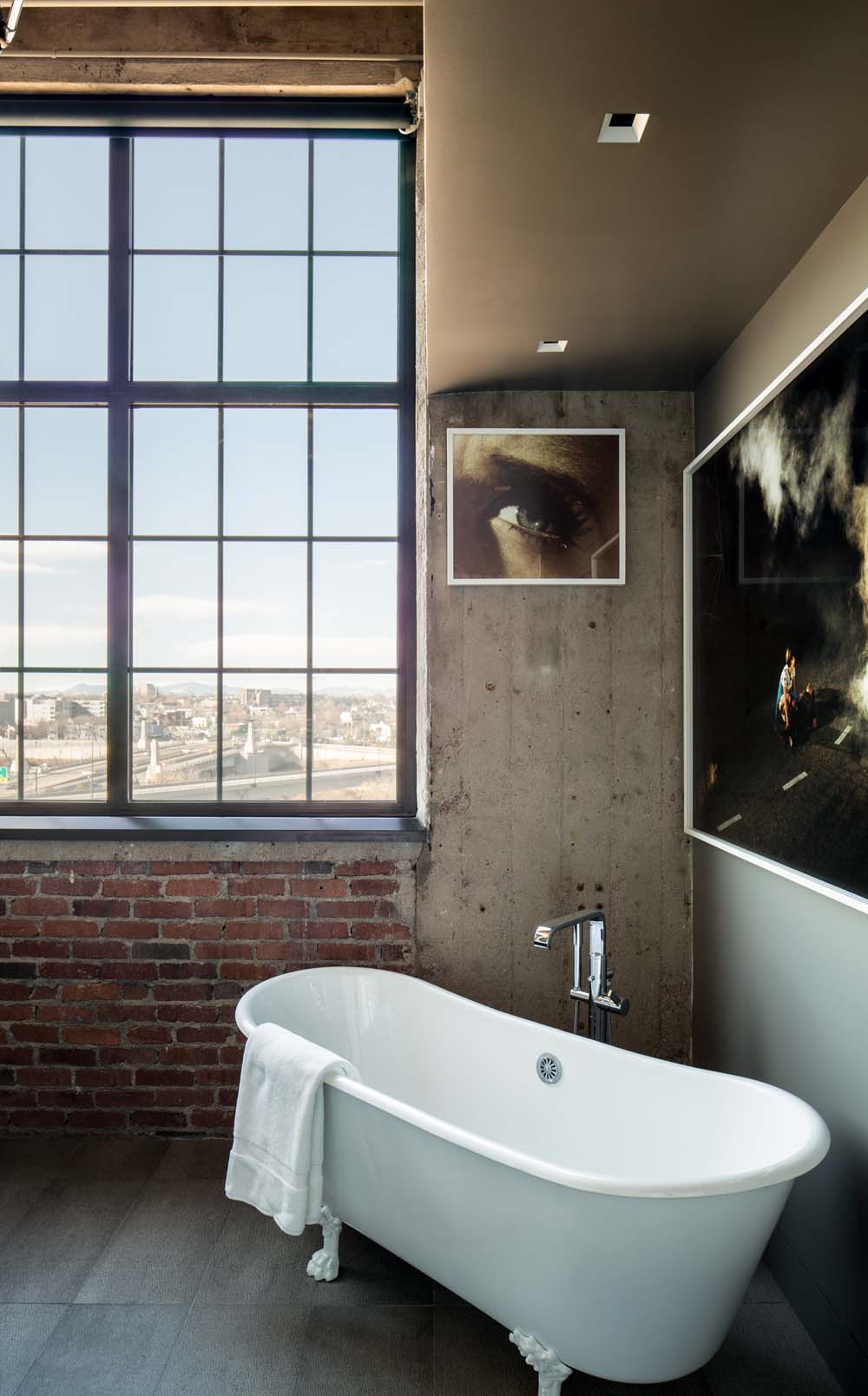 Inside the unit, Robb (Robb Studio) and Bishop (Studio Gild) inherited several attractive features: 14-foot ceilings, exposed concrete, and a fireplace set within the original chimney stack of the building. The primary goals included making the kitchen more prominent within the home— it was moved forward to engage more acutely with the dining and living room spaces—and to properly showcase the client’s art collection (much of which, including an eight-panel painting by Matt Mullican that stretches across nearly an entire wall).

“Certain projects in an architect’s career deliver a discerning client who has the resources to allow an unencumbered creative process,” said Robb. “This was one of those projects.” In one corner, he revamped the fireplace by highlighting exposed concrete and steel alongside Shou-sugi-ban wood at the hearth. (Shou-sugi-ban wood is the Japanese style of burning wood to create a distinctive blackened effect.) 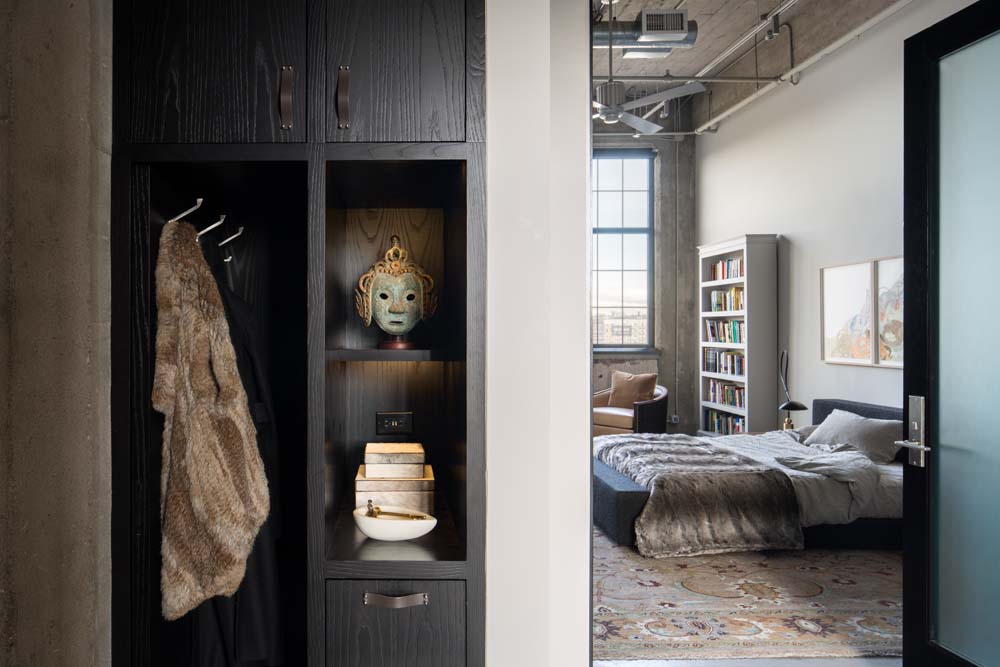 In lieu of a traditional mantel, this architectural fireplace instead features a geometric steel beam with inlayed wood, which is both mounted to the concrete and hoisted from the ceiling. The result is a feature that makes a statement while still blending seamlessly into the surrounding environment. The mantel echoes the exposed beams, pipes, and ductwork found throughout the loft, and the rich color of inlayed wood calls to mind other design details found elsewhere in the home, including shelving, cabinets, and even the dining room table. A substantial walnut bookcase anchored the design palette, and the inviting dark wood turns up again on the fireplace and dining room.

With the help of Exquisite Kitchen Design’s Mikal Otten, Robb also transformed the kitchen by relocating, then raising it. This choice was largely architectural in nature, as it enabled the renovation to take place without interfering with the neighbor’s unit below. But it was also a stylistic choice, as it literally elevated the kitchen, thus bringing it into more prominent view. From the custom-stained oak lower cabinetry to the White Macaubas quartzite countertops, each element was custom designed for this exact space. According to Bishop, even the cabinetry choice connects to the rest of the home’s design: The floors feature the same gray wash, adding continuity. The upper level cabinets are covered in a perforated metal for a one-of-a-kind look that is both elegant and industrial. Robb described the new kitchen as a space that “appears simple, but is grounded in trick details, like the intricate edging of the quartzite counters.” 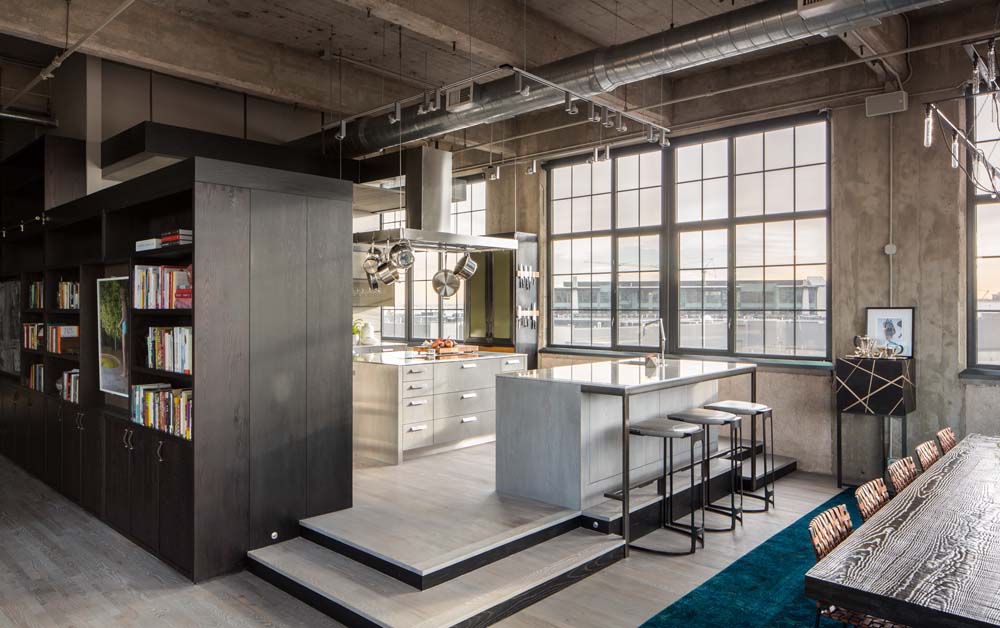 In partnership with Denver’s 186 Lighting Design Group, Robb and Bishop next worked to integrate lighting that communicates the overall design aesthetic. The issue of lighting presented a significant challenge because the unit began as an empty shell, and there was a desire to minimize the amount of hanging fixtures. As a result, they opted for a more unobtrusive suspended track lighting system, which effectively disappears. “This allowed the few featured light fixtures, artwork, and design elements to become the focus, rather than the lighting itself,” said Robb. The tactic also allows the unit to become a true showcase at night, as the large windows overlooking the lights of downtown Denver meet the welcoming interior. Guests can simultaneously take in the city skyline outside and the stunning artwork and fireplace inside. Considering the intensive redesign, Bishop appreciates the way the renovation celebrates the existing space.“ Guests seated in one of the Milo Baughman lounge chairs, under Matt Mullican’s artwork, can gaze across the entire living room and into the dining room and kitchen, while enjoying 270-degree views of downtown through the loft windows,” she said. Each living space floats within the home, to help preserve the views.

Inside and outside, past and present—the thoughtful renovation of a historic property like Flour Mill Lofts balances the natural elements of Colorado with the industrial nature of the neighborhood. It also balances the rich legacy of the space with a clear focus on what lies ahead, proving once again that great design remains timeless. 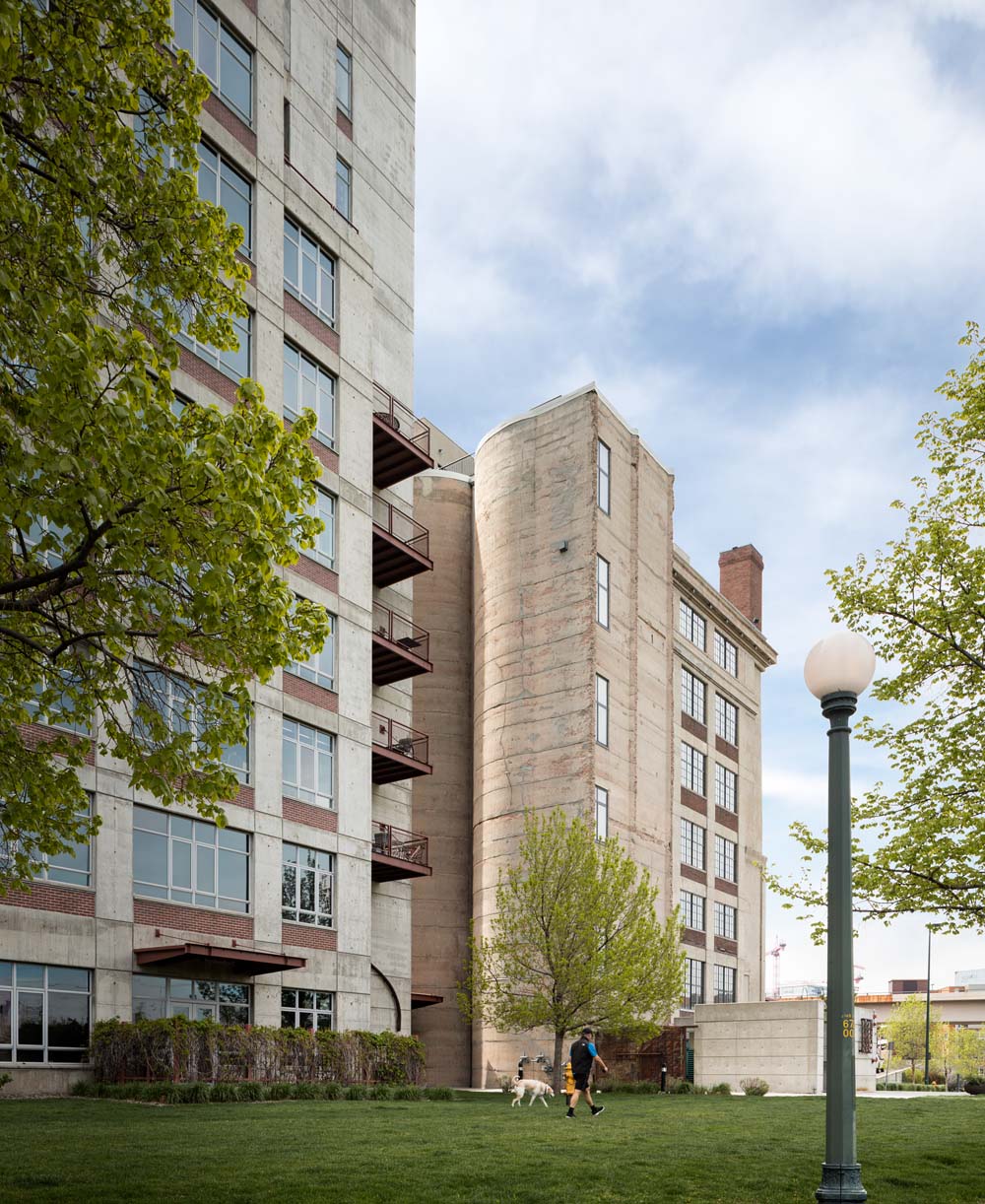