What does it mean to be an expert at something? For Adrian Kinney, being a mid-century modern home expert means living in one, renovating one, and investing in a culture that goes beyond a bottom-line—and we’re excited to have that wealth of knowledge by our side as a partner of Denver Design Week. 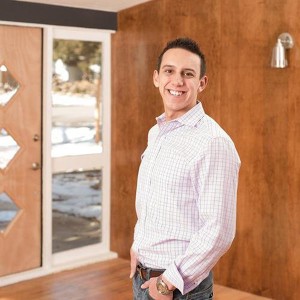 On paper, removing 300 square feet of a property doesn’t make much sense. Yet that’s just what Adrian Kinney, Broker Associate with Resident Realty, decided to do when renovating a Cliff May home in Harvey Park, restoring the original carport from the covered patio addition. “I wanted to latch onto what the architect was originally going for,” said Kinney. “Cliff built it that way for a reason.”

That preservationist prerogative is one of the defining factors of Kinney’s specific approach to the mid-century market—and it’s one of the reasons we’re proud to have him by our side as a partner of Denver Design Week.

But what goes into an acute approach to classic design? In a word, love. When he initially came across a Harvey Park Cliff May house back in 2011 as a property manager, the first impression had an unanticipated impact. “When went in, it had the feeling of a happy home—lots of sunlight and a great layout,” said Kinney. “I didn’t think much of it then, but when I came back to it four years later looking to buy, there it was: the house that I originally fell in love with.”

The only issue? The owner was looking to rent, not sell. However, thanks to some supportive neighbors—and a precursory glimpse into the tight-knit, mid-century modern community—she was convinced otherwise, allowing Kinney and his partner to move in shortly after. That’s when the renovation research began, and he began to unearth how deep the cultural rabbit hole went. “I understood there were specific styles and guidelines to follow,” said Kinney. “I stopped and asked myself ‘How the hell do you do this?!’”

He did it by spending $500 on books devoted to mid-century design, and thoroughly enmeshing himself within the community that would become his calling card. By being active via social media and establishing a presence with others who understood the inherent value of a timeless form, he’s become part of the conversation that takes place within a like-minded group of preservation enthusiasts. “There were Cliff Mays and other mid-century modern houses that sold before, but no one had specifically articulated exactly why people should pay more for certain elements like low-slung roofs, integration with outdoor space, and Wright-inspired compression and release design.” The key for Kinney was segmentation and going beyond the surface. “I’d show people old Denver Post articles about the property,” he said. “Not only does it look cool, but it has a story behind it.”

That story is one that helps the modernist mindset connect both neighborhoods and generations. As Kinney noted, he’s seeing more clients than ever who are looking for an original feel in a modernized house. And it’s the passion, orientation around natural surroundings, and functional humanistic flow that differentiates the progenitors’ plans from the modern-in-name-only aesthetic. The idealism and hopefulness that transcends architecture is one that Kinney shares with his clientele. “A hallmark is that it was the era of opportunity; of growth and prosperity,“ he said. “Mid-century modernism can easily translate into contemporary styles—it’s much harder for it to work vice-versa.”

A commitment to value—in all senses of the word—is what defines Adrian Kinney as a mid-century modern expert in Denver real estate. It’s more space, with less square footage. Or as he put it, “I’m not just here to sell a house.”