AFTER GENERATIONS OF RENOWN AS AN ICONIC HOTEL, A POPULAR DENVER LANDMARK GETS NEW LIFE. WITH TURNTABLE STUDIOS, JOHNSON NATHAN STROHE HAS CREATED FRESH AND VIBRANT MICRO HOUSING THAT BLURS BOUNDARIES BETWEEN YOUNG AND OLD. 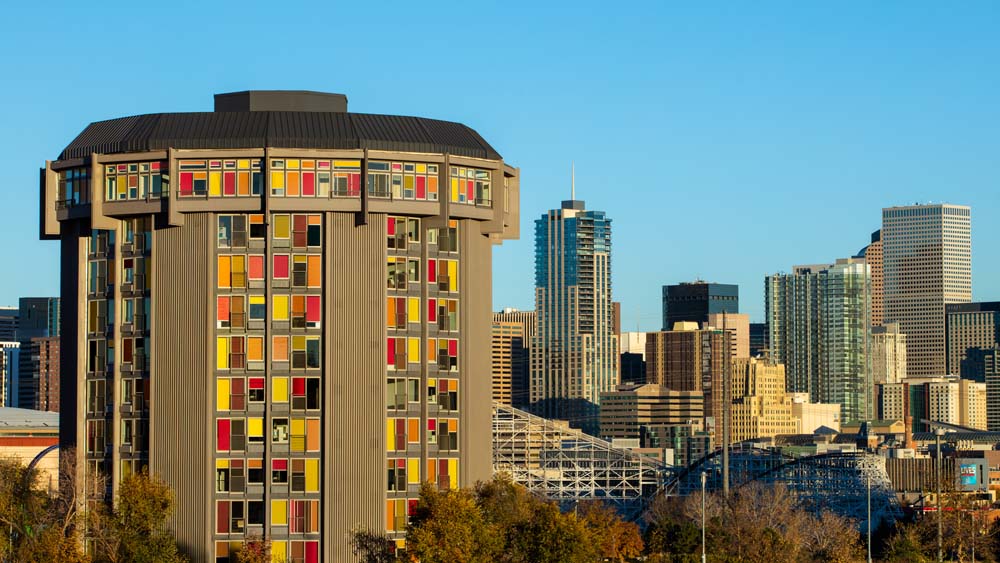 One of the newest arrivals on the Denver micro housing scene is also, paradoxically, among the oldest. Even if the Turntable Studios name doesn’t yet ring a bell, the building it occupies can’t help but be familiar. Built as a prototype hotel in the late 1960s and standing strong in the shadow of two Mile High Stadiums in the decades since, the circular 13-story landmark has for years been a comforting sight along the I-25 corridor. But in contrast to its historical significance, the building actually represents a refreshingly progressive view of modern living. And it easily could have gone another direction entirely. 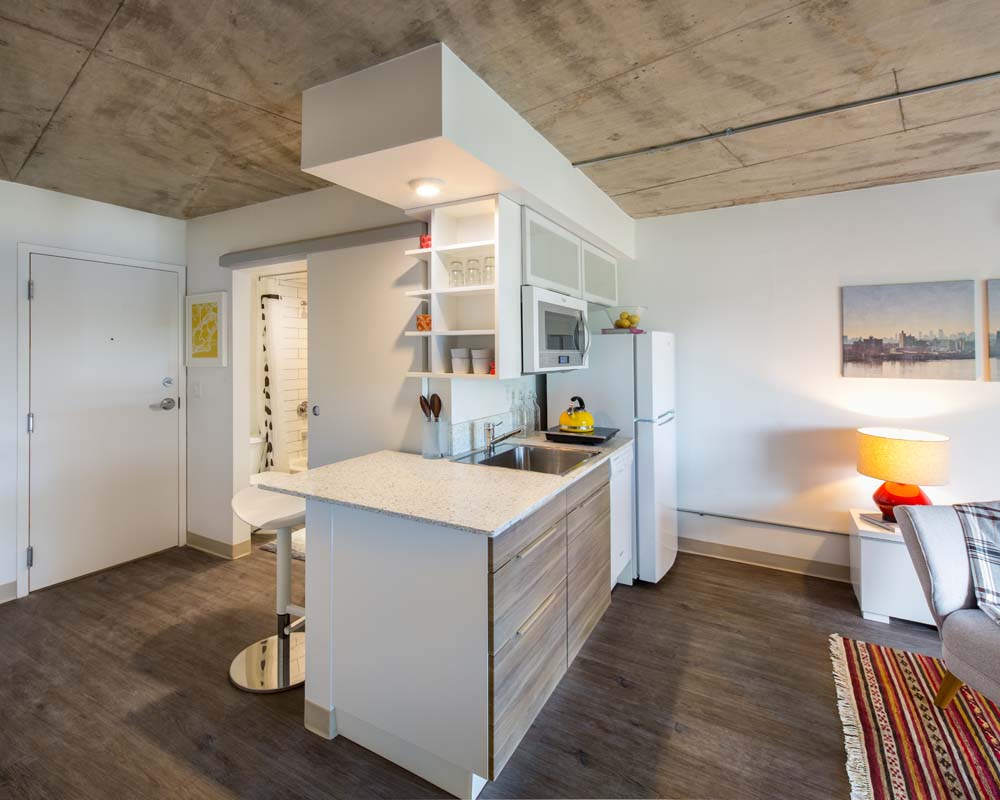 There was plenty of interest from developers when the property at 1975 Mile High Stadium Circle came available. In the midst of a booming real estate market, any tract of land brushing up against Jefferson Park, the Highlands, and downtown Denver offers loads of potential. But where most saw an obvious scrape job, Nichols Partnership was intrigued by the opportunity to renovate a historic building—and in so doing, provide livable, attainable rental options at a dramatically smaller scale. Using the existing hotel footprint, the vision came into focus quickly: 179 micro units, most at 335 square feet. 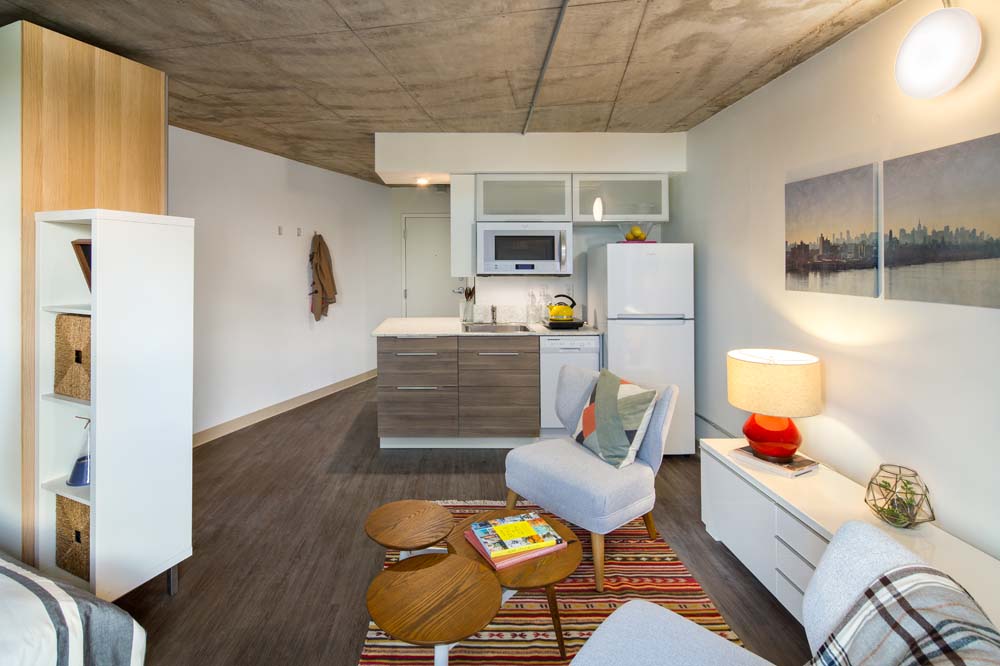 “It certainly allowed us to offer these units that look and feel like new construction at a monthly rent that is significantly lower than if we’d built it from scratch,” said Dan Schuetz, Project Manager for Nichols. “Just taking it down to the concrete was more cost effective, and the concrete that’s there is solid, and it’s going to be there for hundreds of years. It’s a good structure.” 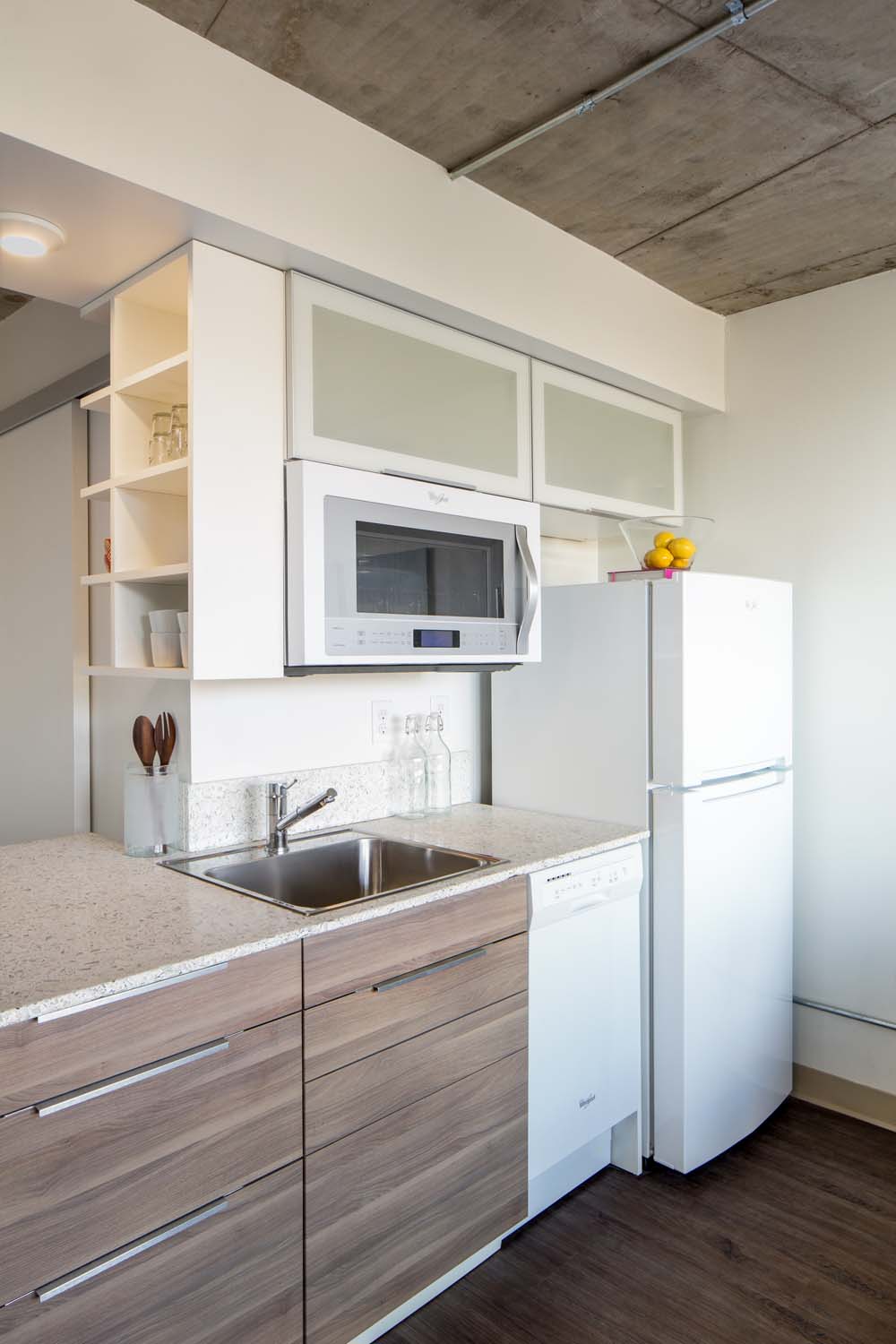 That same structural integrity, however, brought with it a high degree of structural constraint. Johnson Nathan Strohe (JNS), who handled architecture and interiors for the project, chose to embrace those constraints right away. Knowing they were working with an inherently circular building, they looked to other mid-century designs for inspiration. One particularly well-suited contemporary was the iconic Capitol Records building in Los Angeles. This early connection helped establish a music-heavy theme throughout, including a wall in the main floor community area that required the careful sourcing of dozens of vintage speakers. 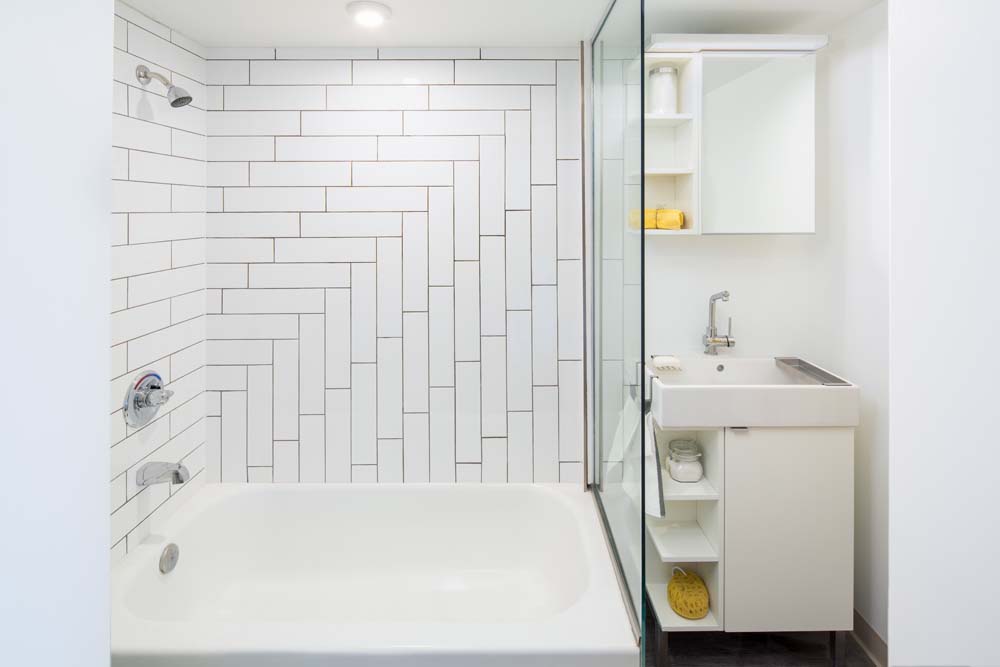 Speaker wall notwithstanding, the community area required the most structural reinvention, as walls were brought down to increase flow and encourage communal interaction. The main level tumbles from one dynamic area to another, with a workout room, TV sitting areas, ping pong table, foosball, shuffleboard, and direct access to the outdoor swimming pool. Lighting and furniture feature an emphasis on red, orange, and yellow, which ties directly to the “kinetic art” created by the randomly sequenced red, orange, and yellow shades adorning each unit. When viewed from the outside, those shades provide an ever-changing tapestry to passersby, fully dependent on which unit’s shades are down and which aren’t. 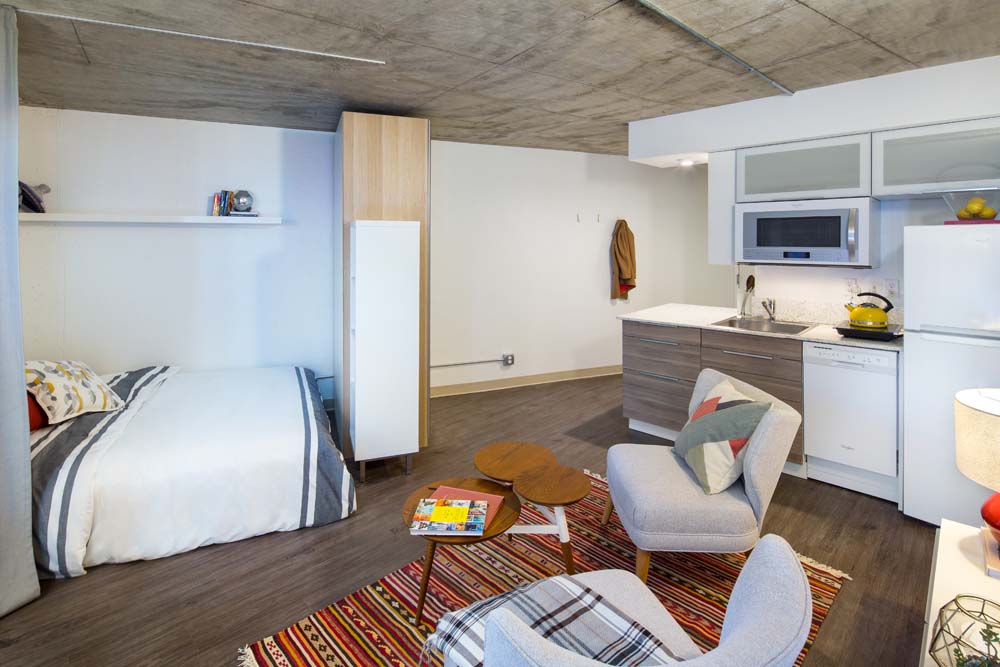 From the inside of a model unit on the ninth floor, those shades—which are neutral on the backside so as not to overwhelm the interiors—complement what is arguably the most important element of the renovation: the floor-to-ceiling windows. “We knew it was going to be great, but it was still a surprise just how much bigger it made the units feel,” said Tobias Strohe, Partner at JNS. The addition of Juliet balconies allowed for sliding glass doors, which means not just natural light but, if the mood strikes, fresh air. 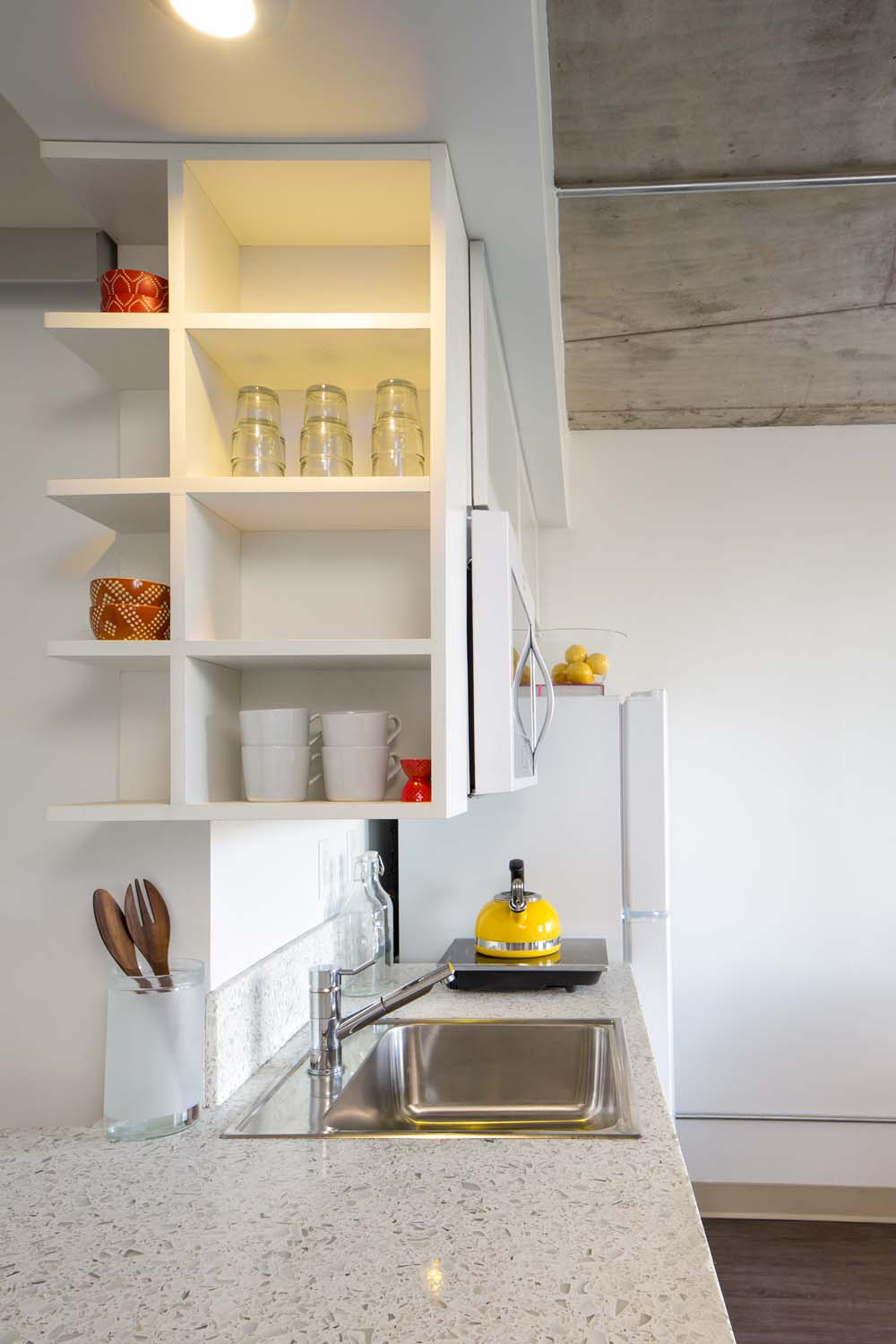 As with most any living space, micro unit kitchens are crucial to obtaining balance and flow. “You often see kitchens that are out of proportion, and there’s nothing left that’s a workable space,” said Strohe. “Counter space is the number one thing because it’s going to fulfill more than just a kitchen functionality in a small unit. So you have to balance that against the question of: How much cooking will you actually be doing if you live here?” 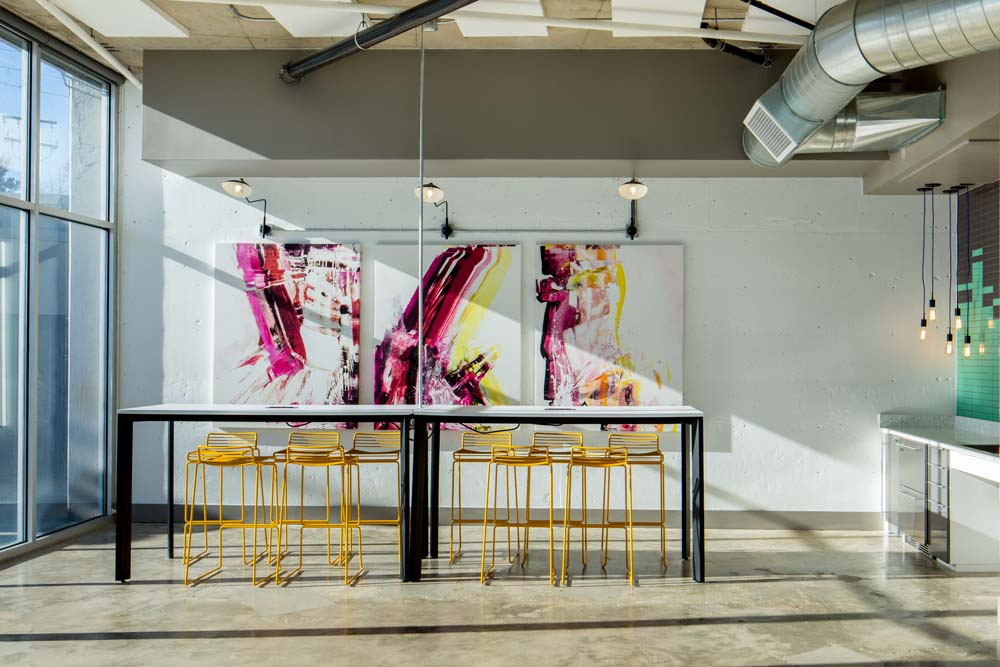 Mindful of this, JNS passed on a full oven and large appliances, opting instead for counter-depth refrigerator, 18-inch dishwasher, movable cooktop, convection microwave oven—and plenty of real estate for the aesthetically pleasing, recycled glass countertops. Doing so didn’t necessarily save on cost, but it was an important tactic for maintaining proper functionality. “Currently a lot of these appliances are the same cost as the full goods because they’re just less common in the United States,” said Jessica Schoen, interior designer at JNS. “But everything we picked, we went with a high quality product. And it all just fits.” 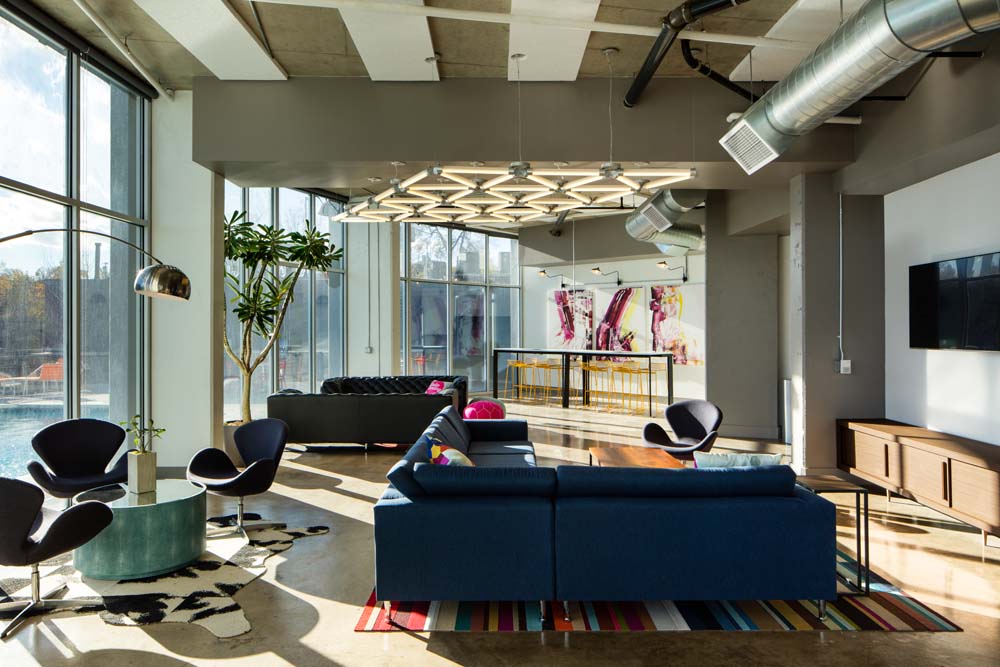 They also left room for a queen sized bed, rather than the Murphy bed option more typical of a micro unit, after research showed that most people prefer this. In order to engineer some degree of privacy, they buttressed the bedding area against a wardrobe and shelving unit, and added a curtain track along the side. Nearer the front door, the bathroom features a sliding barn door mechanism and compact storage vanity, but makes use of the original (now reglazed) bathtub. 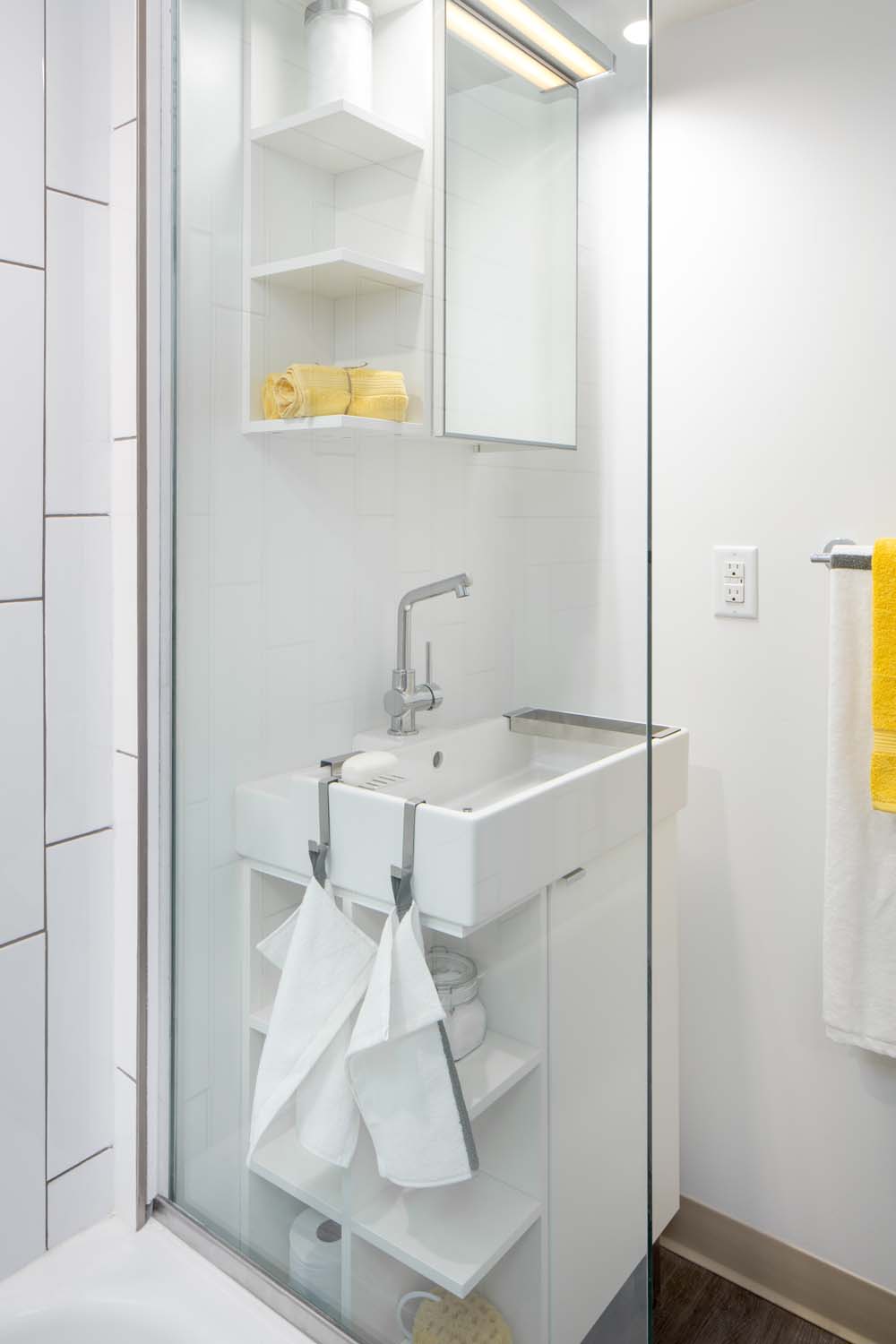 Given the small space and relatively reasonable price point (most units lease for less than $1,000), you’d be forgiven for assuming that twentysomething professionals dominate the building. Everyone, including Nichols Partnership and JNS, assumed the same thing at first. But a funny thing happened at Turntable Studios, and it happened right away: diversity of tenants. Rather than attracting strictly Millennials, the less-is- more lifestyle of attainable micro housing seemed to appeal to those with a Millennial mindset—that is, those who value life experiences over material possessions, those who spend a lot of time away from home, and those who are comfortable in less cluttered, impermanent spaces. 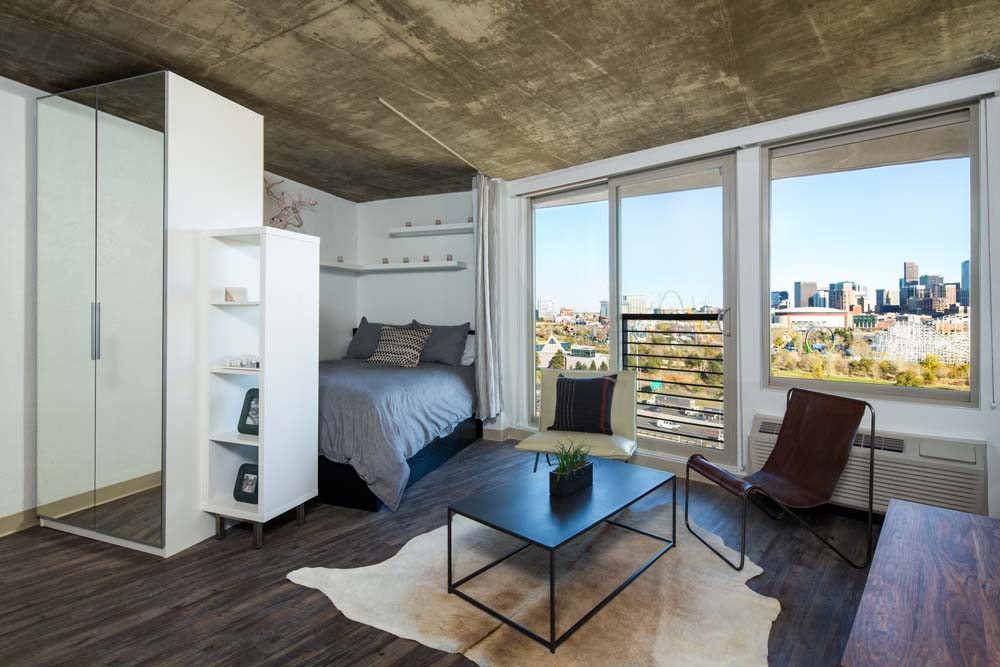 “I think we’ve grown accustomed to living in larger spaces than we really need,” said Dan Schuetz. “Even here in Denver, which isn’t Manhattan or Tokyo, I think people who try living in a smaller space find that it’s kind of liberating, it sort of frees the mind to enjoy the community around you. A good percentage of the building is people in their 50s to their 80s. For some it’s a second home or a city crash pad, and that works because it’s nice and livable, there’s a lot of natural light, and the built environment appeals to people from 18 to 85.” 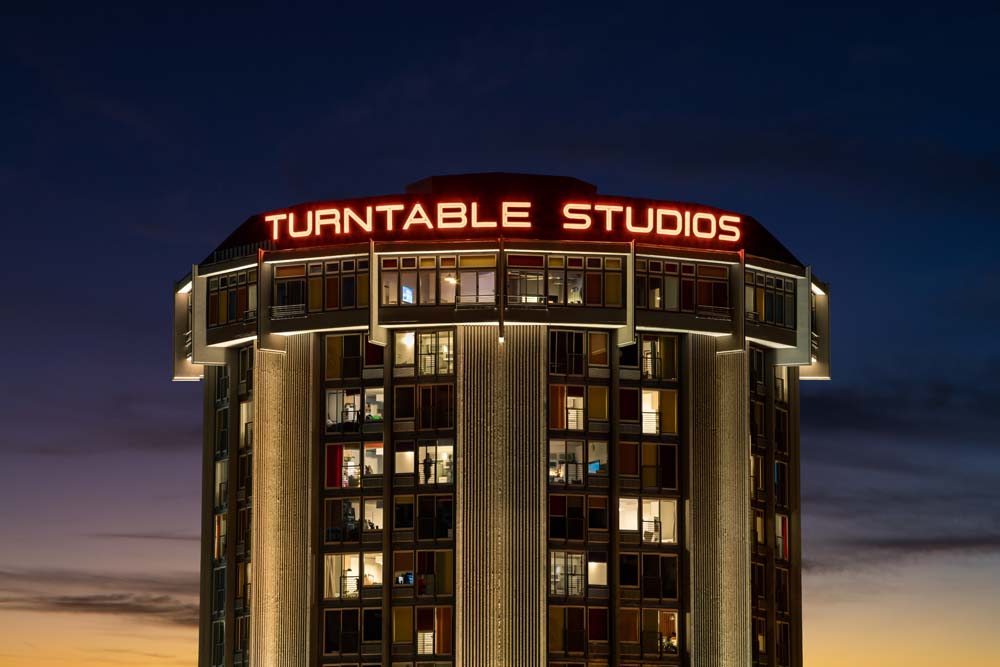