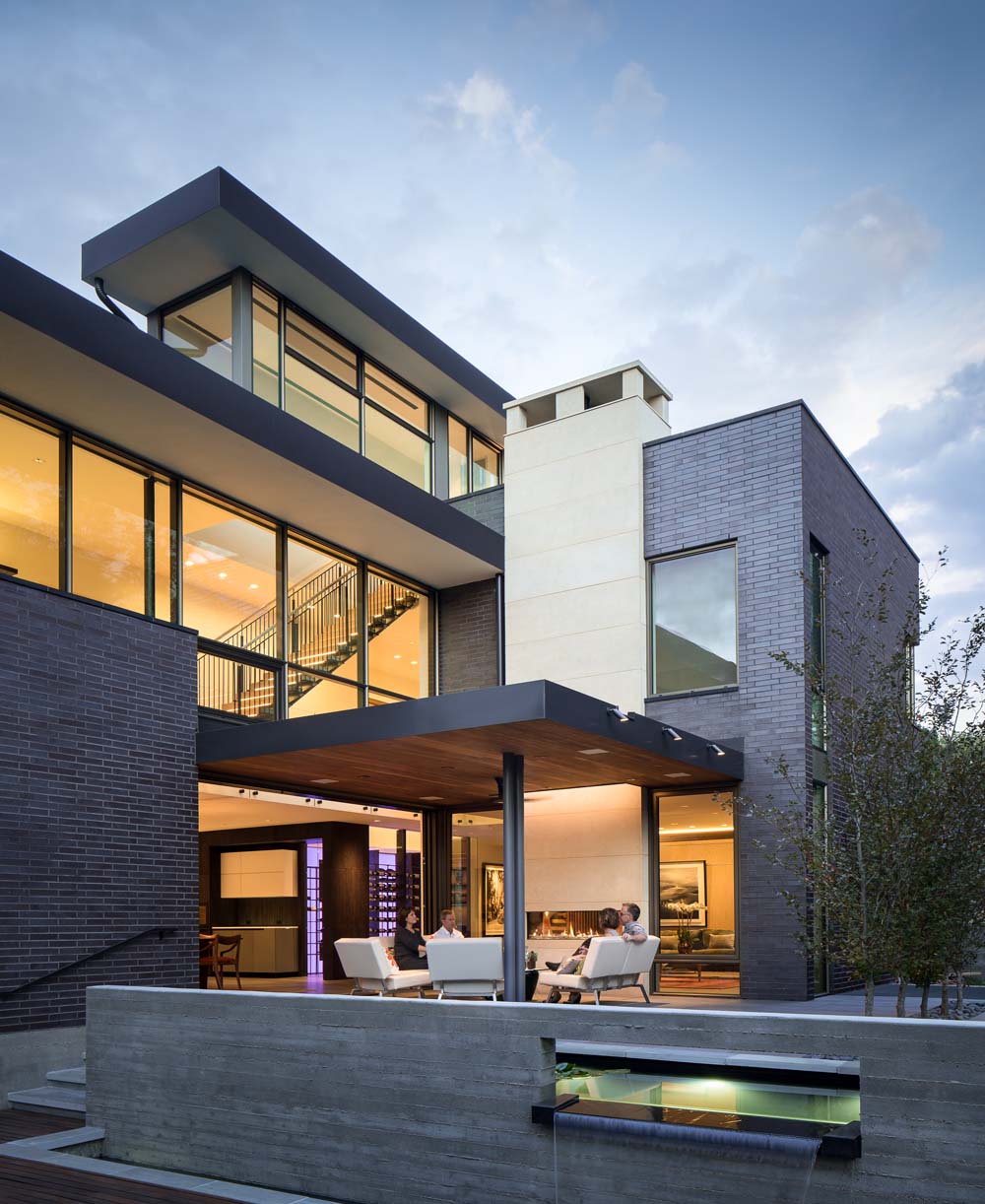 Like many of Denver’s urban neighborhoods, Bonnie Brae has become a patchwork quilt of architectural styles. New home designs here have rarely looked to the domestic typologies set forth between the late 1920s and 30s after noted landscape architect Saco Reink DeBoer designed the winding subdivision in 1923 to emulate a peaceful Scottish Village focusing on the land’s topography and natural beauty. Already a departure from the city’s linear street grid, Bonnie Brae—which translates to “pleasant hill” in Gaelic— became a proving ground of sorts for Denver architects daring to break from 19th century romantic revivals and appropriate emerging European design principles, including the clean lines, flat roofs, and ribbon windows of the International Style and Moderne movements. This genre’s “less is more” assertion left its imprint on the picturesque residential enclave– and also inspired a 21st-century vision for outdoor enthusiasts Leanne and Kevin Duncan, who were looking to build a home both timeless and connected to the neighborhood along with the ability to bring the outside in. 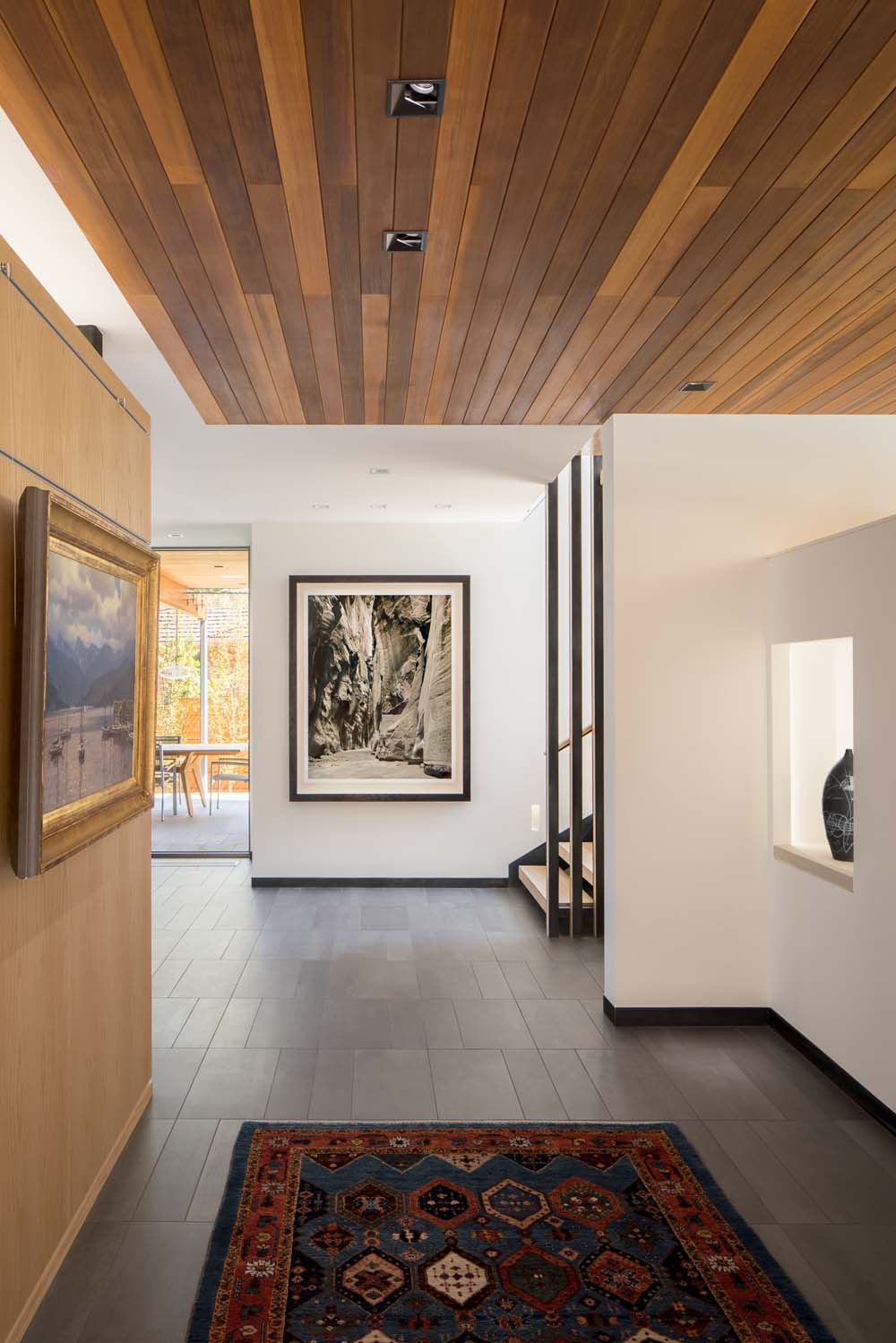 With grown children out of the nest, the Duncans were ready to dispatch their suburban lifestyle and move closer to the city core. “We wanted to downsize not only in land, but in space,” said Leanne, a landscape architect. “We wanted to forgo formalities and use every inch of the house.” While cycling through Bonnie Brae, the couple found the ideal site―located along one of its distinctive curving streets to build a home that would establish their urban roots. 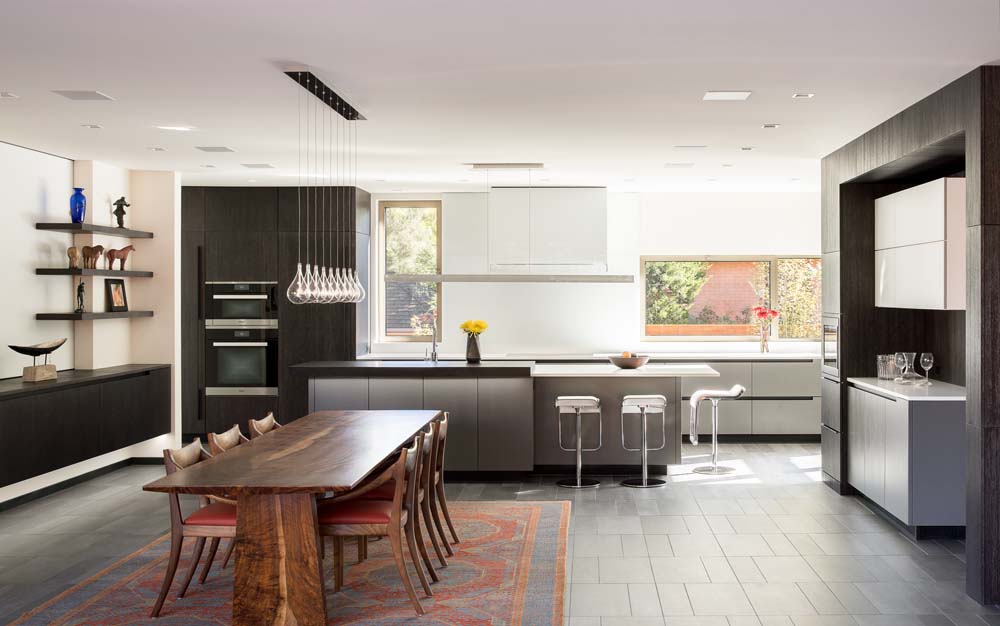 “We appreciated Kevin and Leanne’s desire for a home that would fit comfortably among its neighbors,” said Semple Brown Design Principal Tom Gallagher, who worked closely with founding Principal Sarah Brown on the project. Among Colorado’s leading practitioners of a contemporary approach to architecture, the firm studies context, materials, and landscape to lend specificity to each project―as was the case with the Duncans’ home design. “Their site is a linchpin between the one-story neighbors facing the street and those that sit taller along Bonnie Brae Boulevard,” he said. Both the scale transition and established rhythm of front porches informed Gallagher’s geometric, twostory composition of solids and voids that recalls Rietveld’s De Stijl-influenced 1924 Schr.der House (sans primary colors). “By adding a low canopy and choreographed movement to the front door, we enhanced the entry porch presence and still met all zoning requirements,” said Gallagher, whose plan follows the site’s five-foot downward slope from the street to the alley, allowing the two-story home to convey a modest street presence with expanded volume at the back. 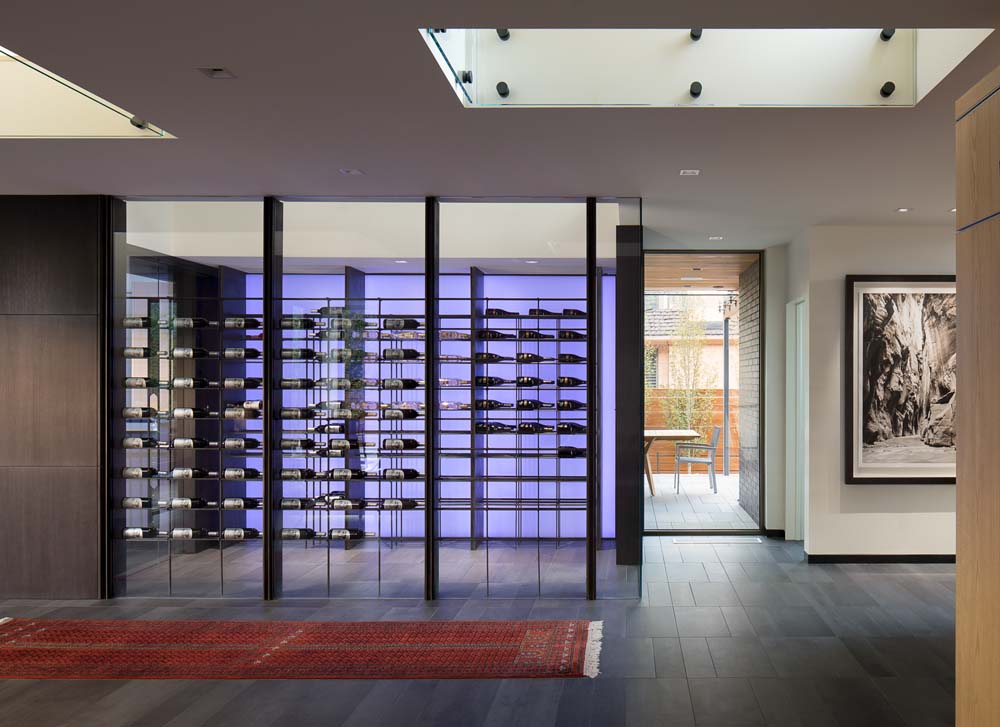 The brick cladding choice—over modern materials du jour, like COR-TEN, stainless steel, or zinc—was also a nod to the neighborhood’s masonry tradition found among its early Modernist, Tudor, and post-war ranch homes. But instead of the typical tan, red, or white standard sized brick, Gallagher chose an oversized “Norman” brick in a luminescent charcoal hue called Ironspot from Endicott Brick. “The manganese in the brick pops on the face when it’s fired, creating iridescent bubbles,” he said while describing how it reacts to light and changes character when viewed from different angles. The longer brick module, along with deep roof overhangs, serves to visually compress the home’s verticality. 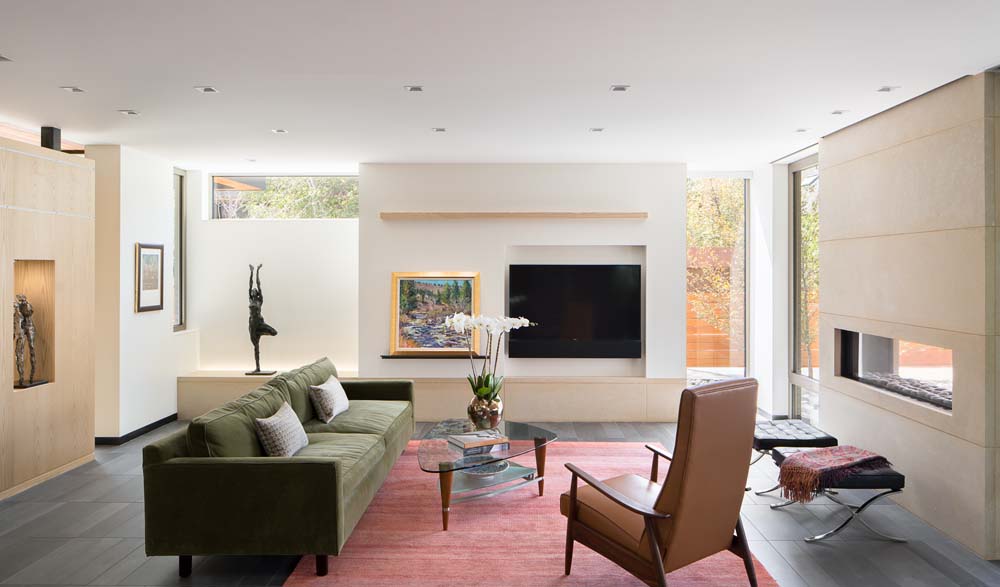 To further embrace the site context and topography, Leanne designed all landscape elements, including a low-scaled, layered entry sequence of alternating steel fences and board-form concrete walls (think Clyfford Still Museum) and a koi pond with lilies to establish the hierarchy of shared and private spaces that continues through the house. “The level of transparency at the front yard reinforces the neighborhood’s welcoming feel while creating a visual edge,” said Leanne. Indoors, the light-infused main level spaces—living, dining, and kitchen—spatially link to one another. In between are tightly framed vistas to the landscape that become the artwork. Even the finely executed minimalist kitchen―(by Veselbrand)―and the soaring exoskeleton-like stair (crafted by local artisan Rob Brindley), which expands skyward to the rooftop patio, feel like functional art. The distribution of the remaining program—master bedroom, two guest suites, an aerie-like office on the second level, and music and media rooms below grade—further defines the home’s inner sanctum. 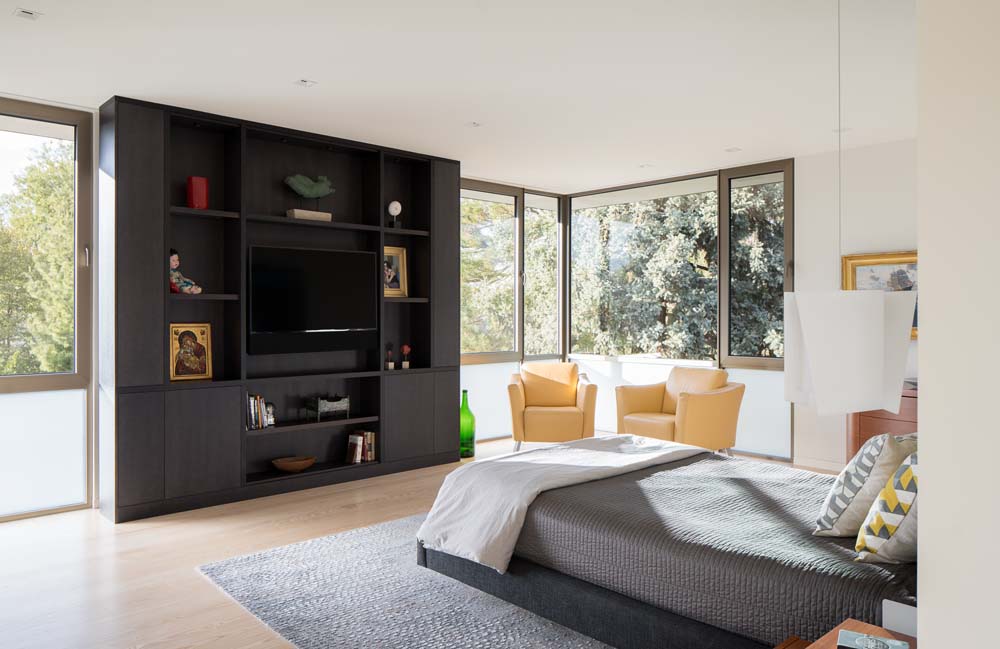 Hidden within the folds of the house, courtyards create indoor-outdoor flow. Gallagher equates this interweaving of space to the plasticity of sculpture; they carved voids from the solid mass of the house to create strategically placed outdoor rooms. Extended eaves create shaded spaces for year-round enjoyment while floor-to-ceiling Reynaers Aluminum lift-and-slide doors fuse interior and exterior living space into one. Adding to the sense of refinement are the precise reveals that distinguish elements: drywall to aluminum door and window frames, flooring to walls, and stone to wood soffits. Aligning joints between materials—and the lack of such typical concealing ornament as base or ceiling moulding—further imbue the home with a sense of elegance through an astounding attention to detail. While the forms of the house are far from eccentric, the high level of craft involved made it demanding to build for the project’s general contractor, Old Greenwich Builders, including Owner Cress Carter and Project Manager Gardner Middleton. 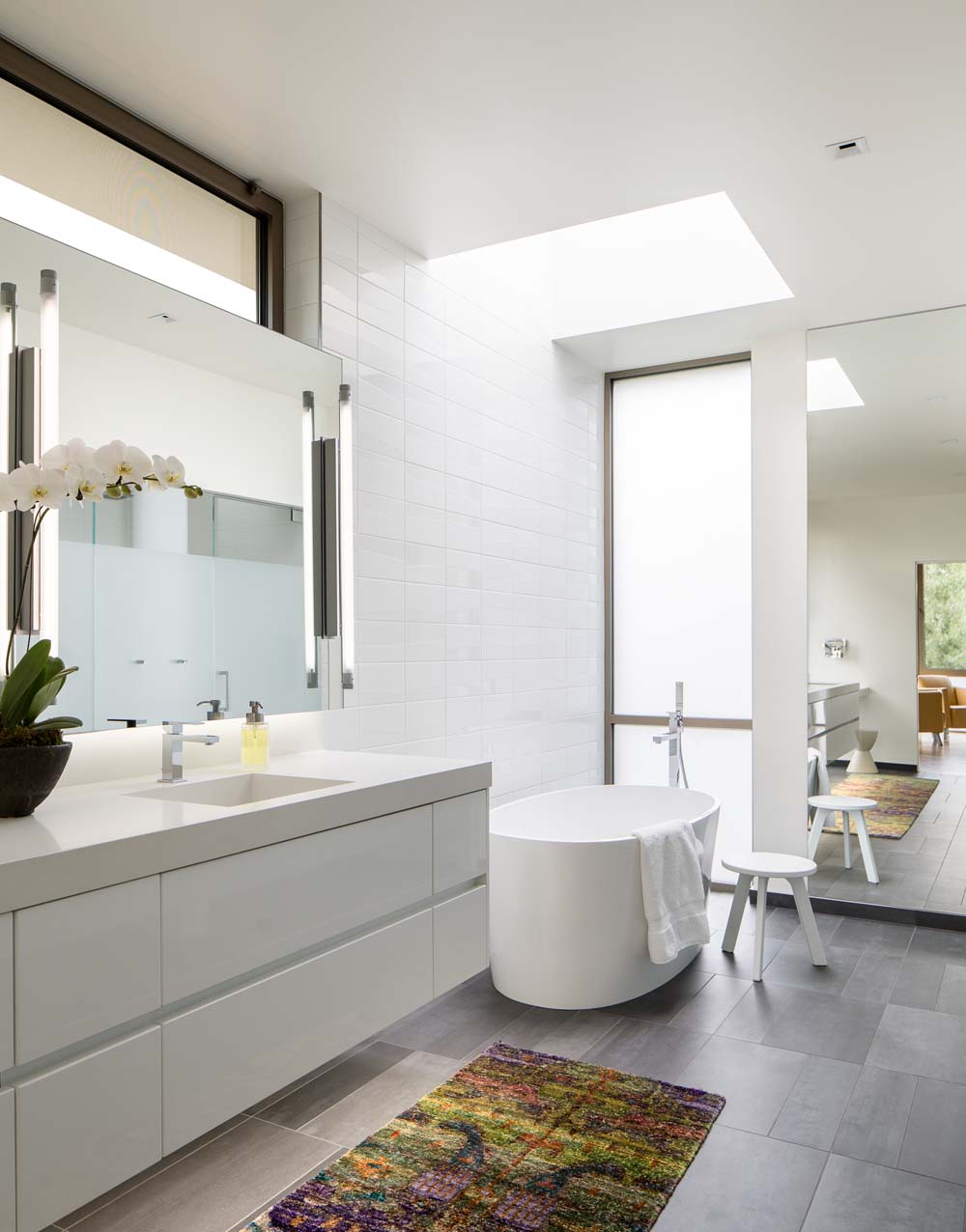 In distilling the neighborhood’s historical context to its essentials, Semple Brown designed a residence clearly grounded in its Bonnie Brae setting. Yet it also speaks clearly in its own voice to the Duncans’ desire for an enduring urban home and to the architects’ contemporary vision. Said Leanne: “On a typical day we use every space; that was our goal.” 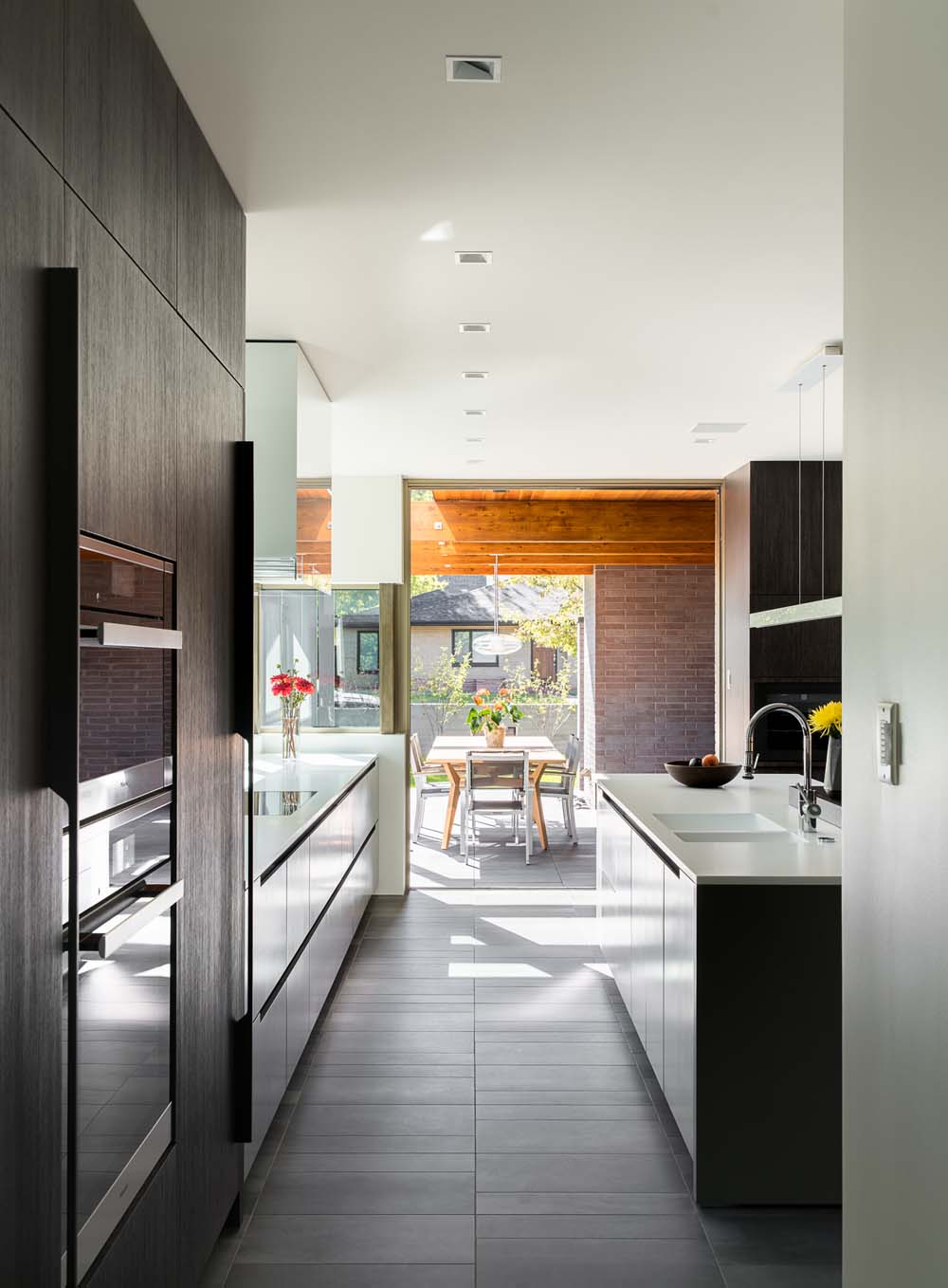