When considering courthouse architecture, “community” isn’t always the first word that comes to mind. But DLR Group’s approach—which resulted in AIA and IIDA awards—proved that respect for a region and its people is the recipe for success. At the center of the Dennis Maes Pueblo Judicial Center lies a crafted communal convergence: a unique kiva-inspired rotunda serves as part wayfinder, part exclamation. But expressing an authoritative modern municipal marvel first requires translating key elements of Pueblo’s past. 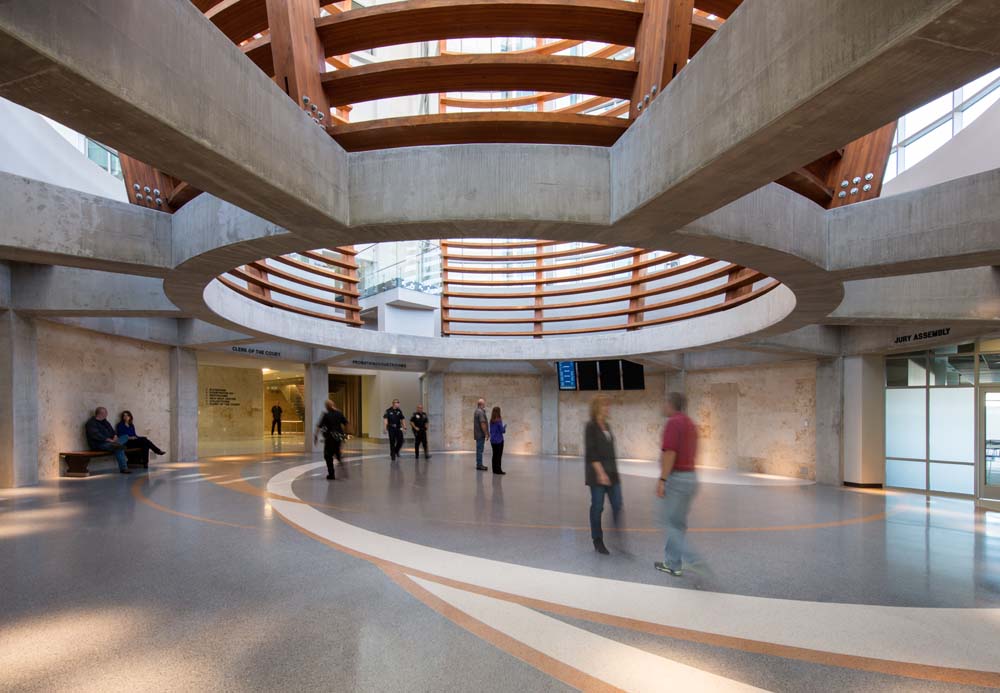 IT BEGAN, AS SO MANY IDEAS DO, WITH A QUESTION: HOW DOES CIVIC VOCABULARY GET LAYERED ONTO THE MODERN COURTHOUSE?

The answer, arrived at by DLR Group, is to develop an inclination for inquiry. For the national firm, that means honoring place by understanding both history and praxis. It means asking its story and what the community wants. And according to DLR Group Court Architect Todd Orr, discovering that sense of place makes all the difference when designing authentically for a specific region. “We want to make personal, local community gestures a part of the context in which the structure resides,” said Orr. “The end result is architecture that isn’t formula-driven, but a result of questions and responses.” 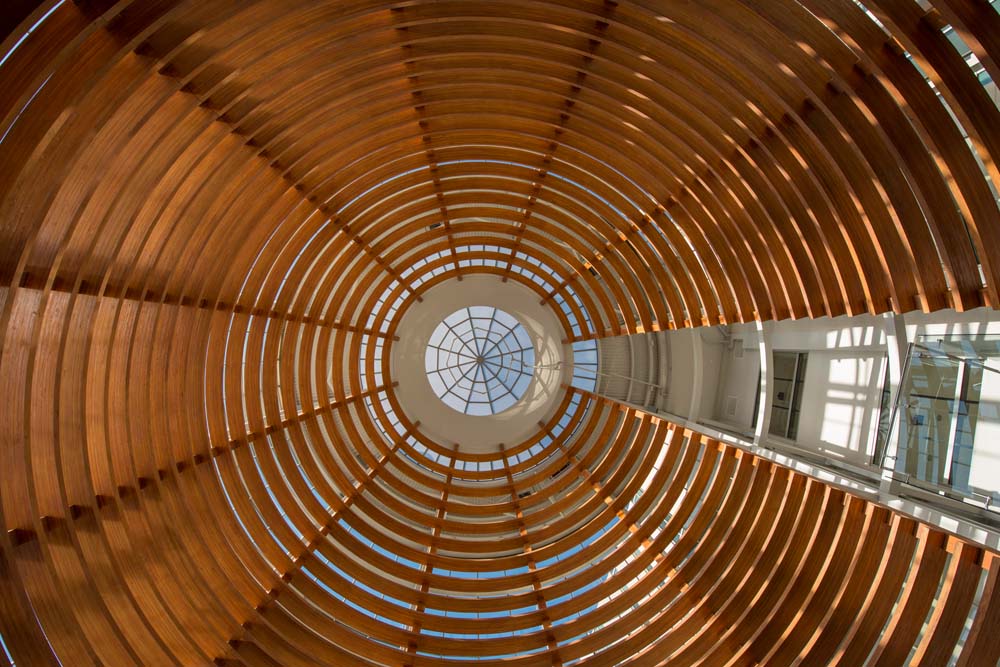 Those responses underscore both the heritage and vivacity of developing today’s Pueblo. Formerly home to an icehouse on the western edge of downtown, the site for the five-story, 180,000-square-foot judicial center was specifically chosen to anchor an end of 5th Street, sitting just outside the Pueblo Creative Corridor. According to Orr, one of the key site challenges was addressing the existing subsurface site conditions to build the LEED Silver-certified structure, but the effort was more than worthwhile. With high-efficiency HVAC, low-flow water fixtures, and recycled or rapidly renewable materials, the transformation revitalizes a forgotten city block. Designed as a bent linear bar, the diagonal axis insinuates the rail line that once traversed the city. The result is a “bracketing” of downtown with I-25 to the east, and to the west, the courthouse, convex to mountain vistas and serving as a referential exclamation point. 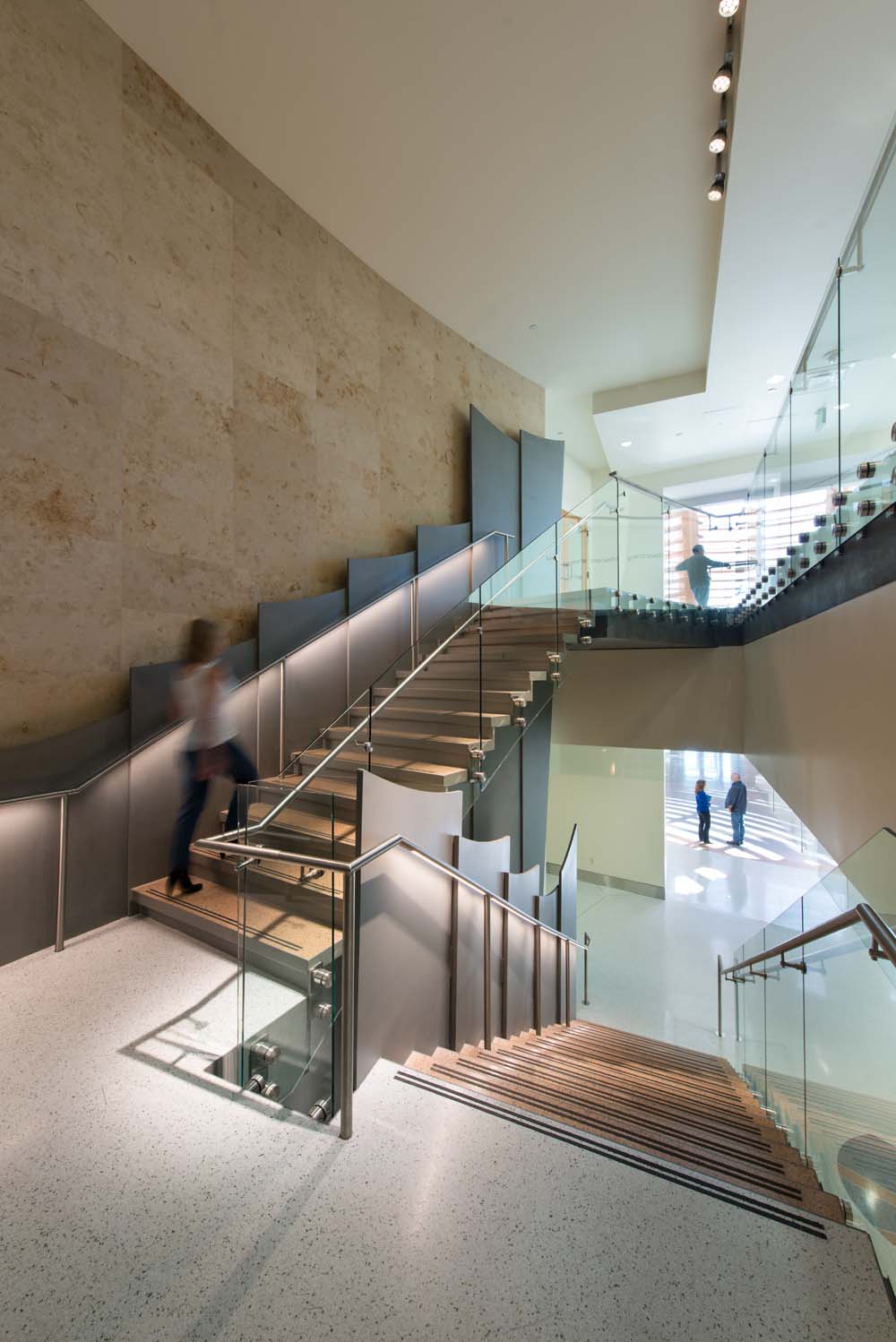 The dot in the exclamation point is the building’s rotunda, integrating the concept of the kiva from Puebloan Indian culture. A staple in communal life, the kiva was a natural fit to address the question of civic vocabulary raised by DLR Group, particularly relevant for the purpose of the judicial center. Circled by perimeter seating and with a compression ring at head-level, the structure owes directly to the layout of its forebearer. As the eye travels upward, the exposed gray concrete gives way to a soaring basket-like wood frame made from Douglas fir, reminiscent of a coke oven in an aesthetic nod to Pueblo’s heritage as one of America’s great steel cities. “The combination of kiva and coke oven inspirations brought in the human element to the space,” said Orr. “The resulting design impact is much stronger and more personal.” 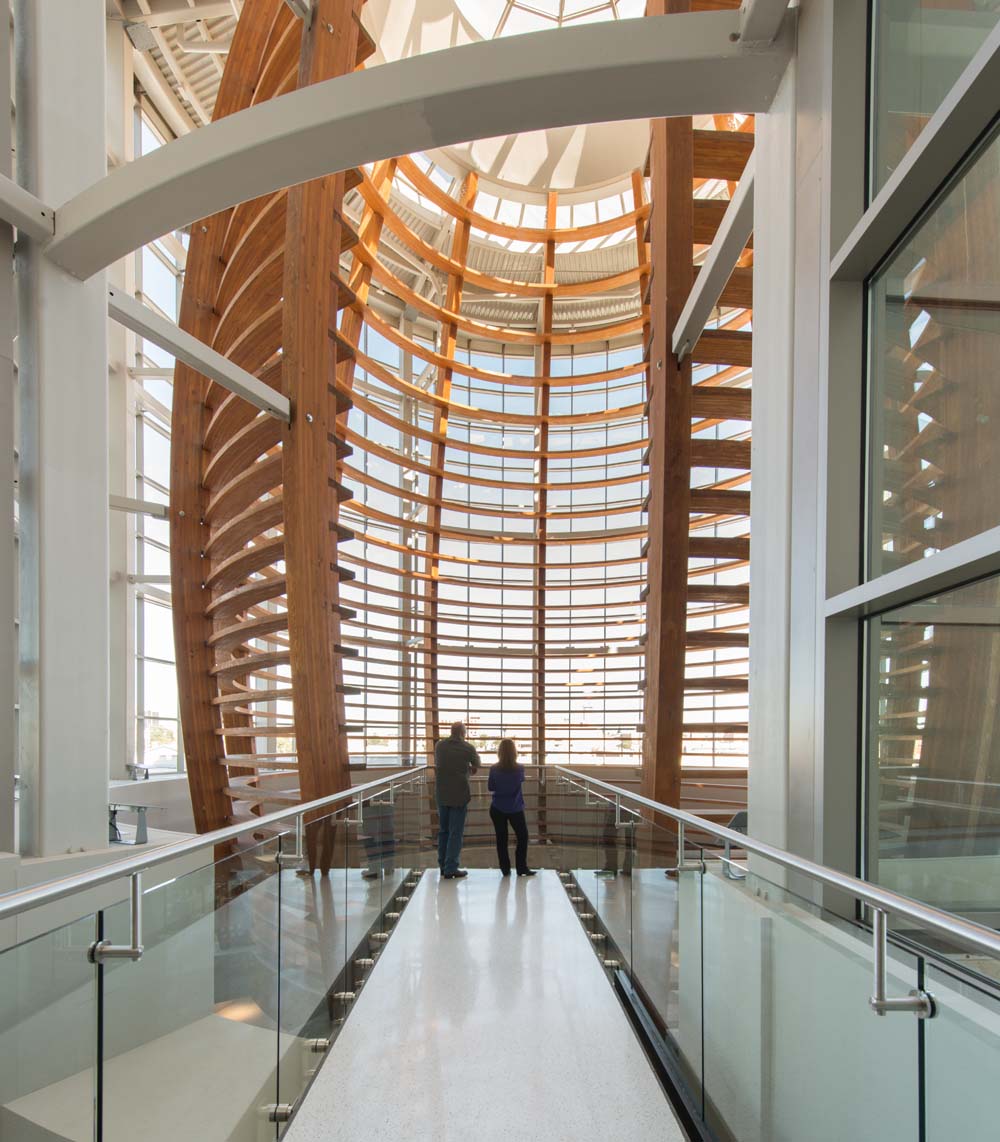 The arching beams culminate in a skylight oculus, which diffuses natural light and creates an aedicule—a room within a room—thanks to the exterior glass curtain wall. Sheathing the rotunda, the wall contains geometric patterns reminiscent of Anasazi pottery, with vertical elements subtly evocative of the region’s natural topography. Together, with the earthen-based color palette and orientation to the sun’s movement, the impact is one of water flowing from the mountains and cutting natural erosion patterns. 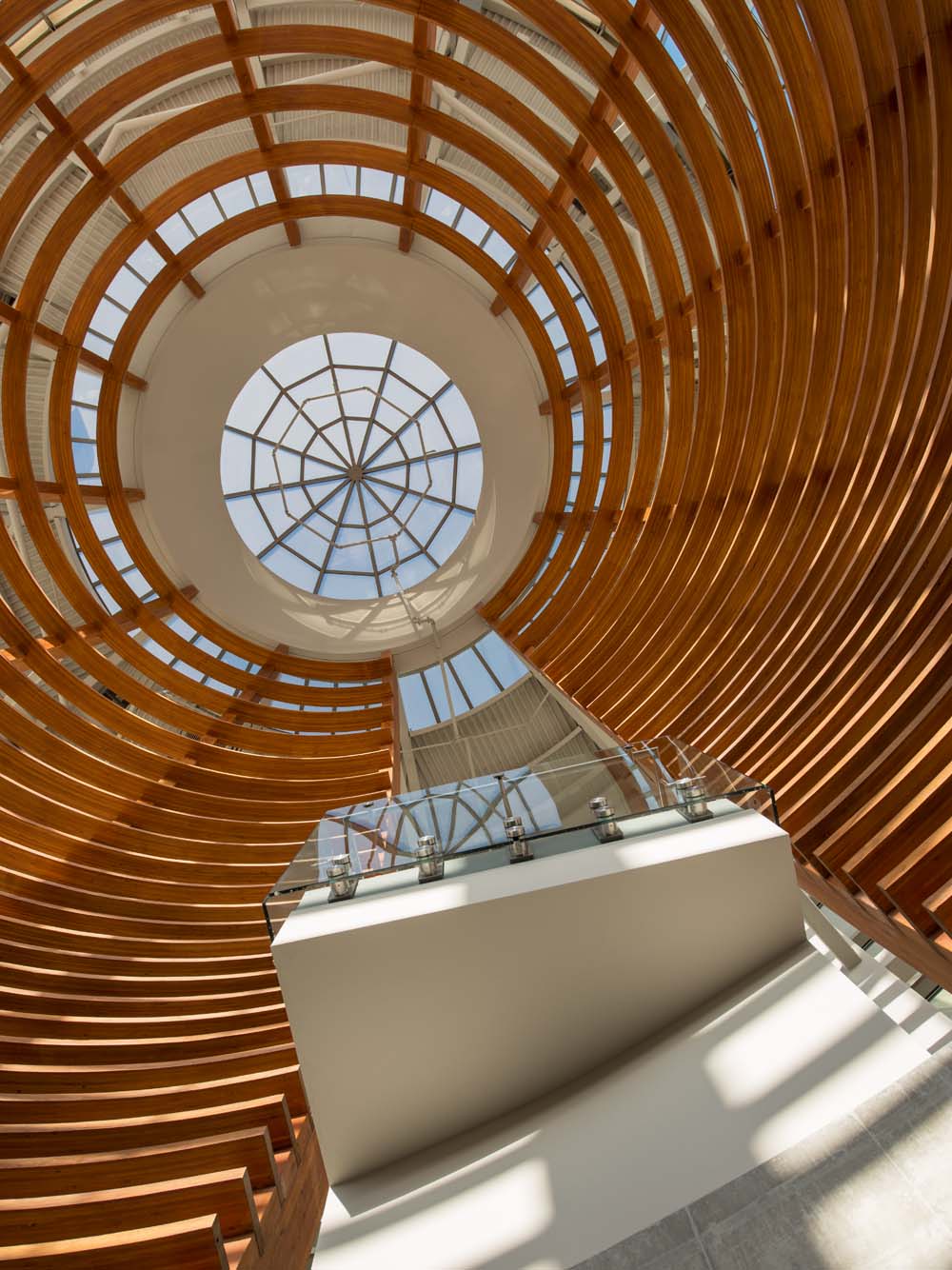 The eye toward natural flow is paramount to design functionality—and given the judicial center’s built-in traffic patterns, public streams and tributaries emerge and converge naturally in a civic swirl. “The nice thing about designing a courthouse is that people have reasons to go there,” said Orr. “It generates more community involvement than other buildings that people might not interact with as much.” By placing security outside of the rotunda, it creates a destination point and sense of arrival when stepping across the kiva threshold, encouraging visitors to stop, observe, and find their paths. Thanks to central electronic docket monitors, it’s easy to determine whether to travel to the adjacent jury assembly space or head to the public elevator core immediately beyond the central room. And in another nod to the region’s industrial past, a steel-plated ceremonial stair connects the pedestrian level to a circumnavigating second floor overlook that references back to the main public space. 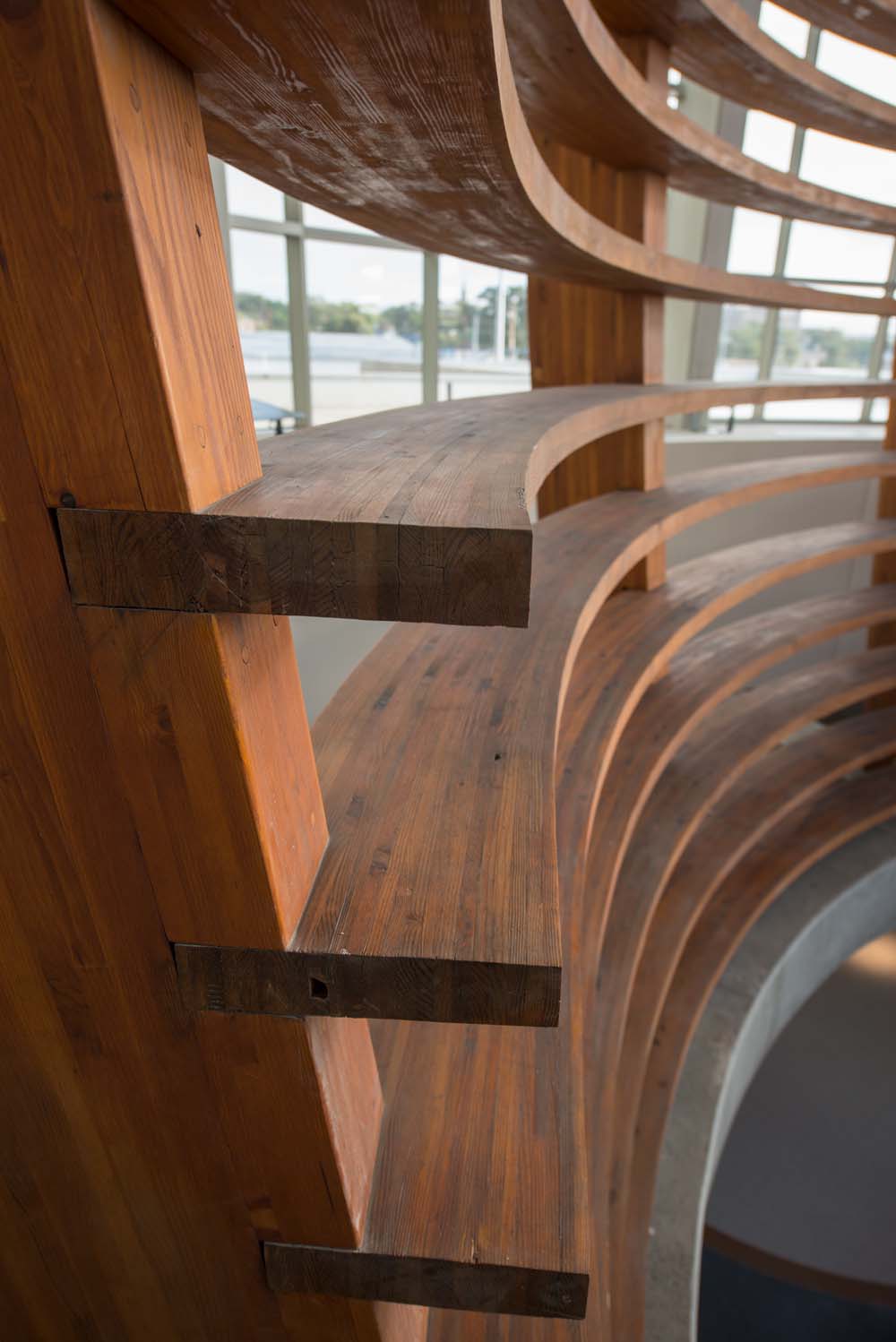 It’s the public space, after all, which brings us back to the initial question of marrying civic and judicial in a seamless manner. Simply put, the DLR Group created a successful project by asking the city to tell its story. “It’s a natural evolution of the [design] process,” said Orr. “We want to make sure we’re asking the right questions to know what problems we’re trying to solve.” That process involved community outreach and visioning meetings to address what was important to the ultimate arbiter of usage—Pueblo’s citizenry. By involving local input from day one, DLR Group was able to discover the optimal way to regionally ground function, sustainability, and intriguing aesthetics in the Dennis Maes Pueblo Judicial Center. And as Orr points out, a project’s success is determined by the people it was built to serve. “How it performs is a direct result of the community’s involvement in the process,” he said. 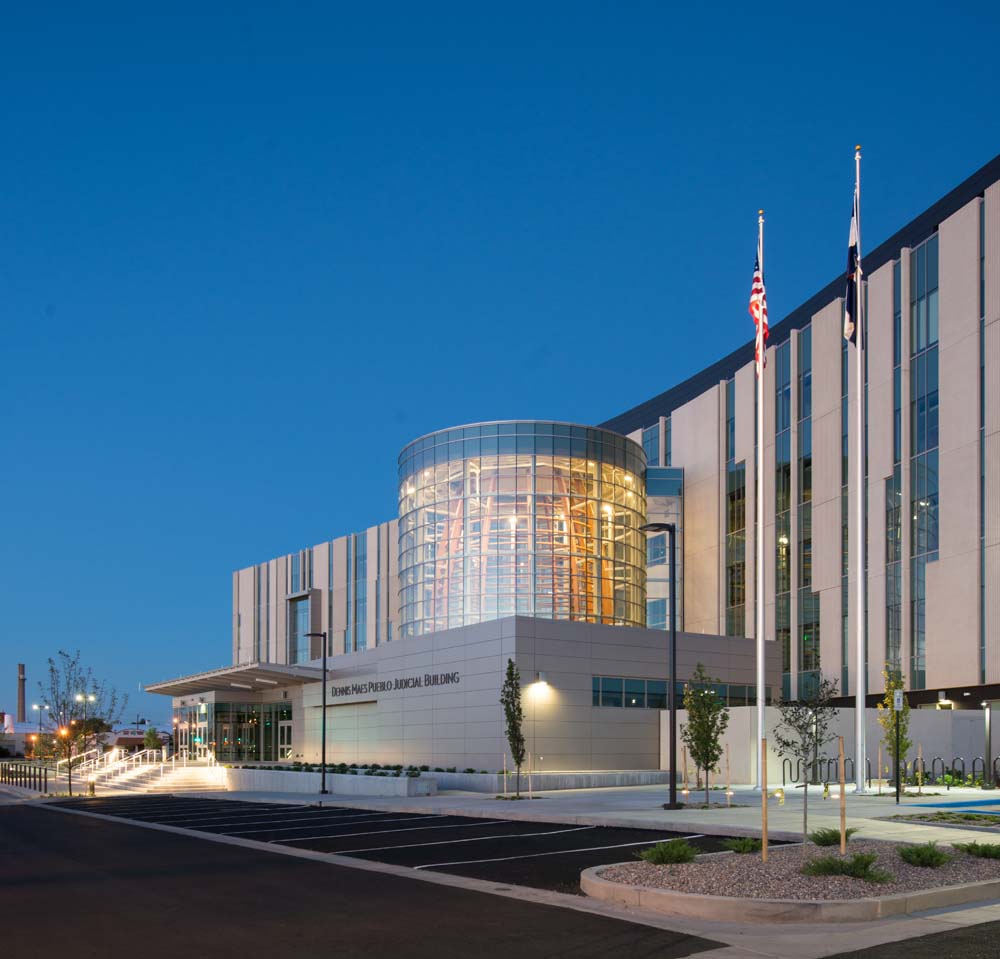