With great architecture comes great responsibility, and with an eye toward revival and respect for history, one Harvey Park couple breathed life into a classic Cliff May home with the help of neighbors, friends, and even the former owner. 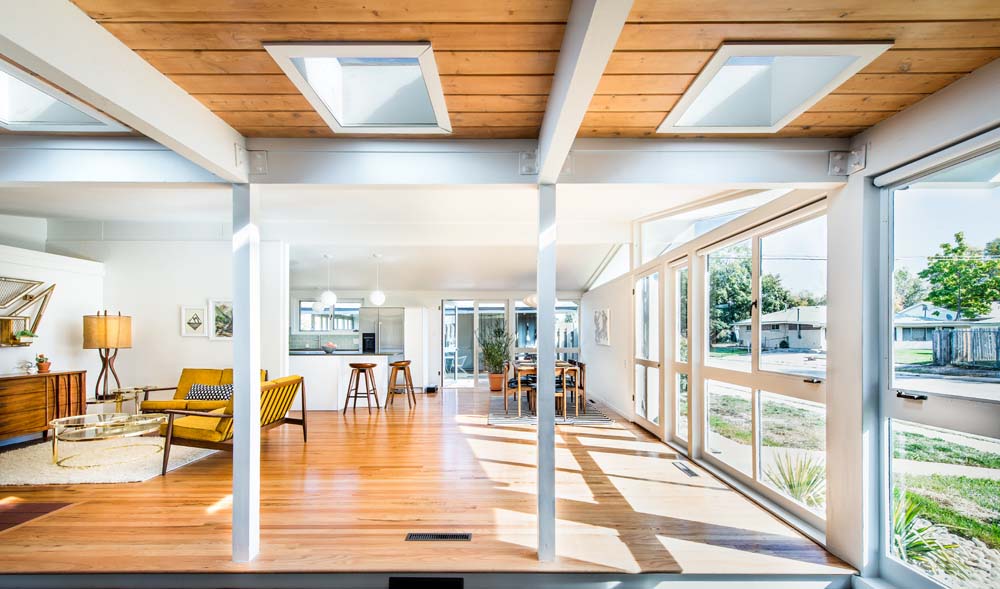 When homeowners opt to renovate, they typically call on experts to actualize their dreams. Contractors handle the pain points: permits, plumbing and the dreaded painting. But for newlyweds Cole and Danielle St. Peter, a DIY approach to renovating a 1955 Cliff May house brought together not just the couple, but also the community. 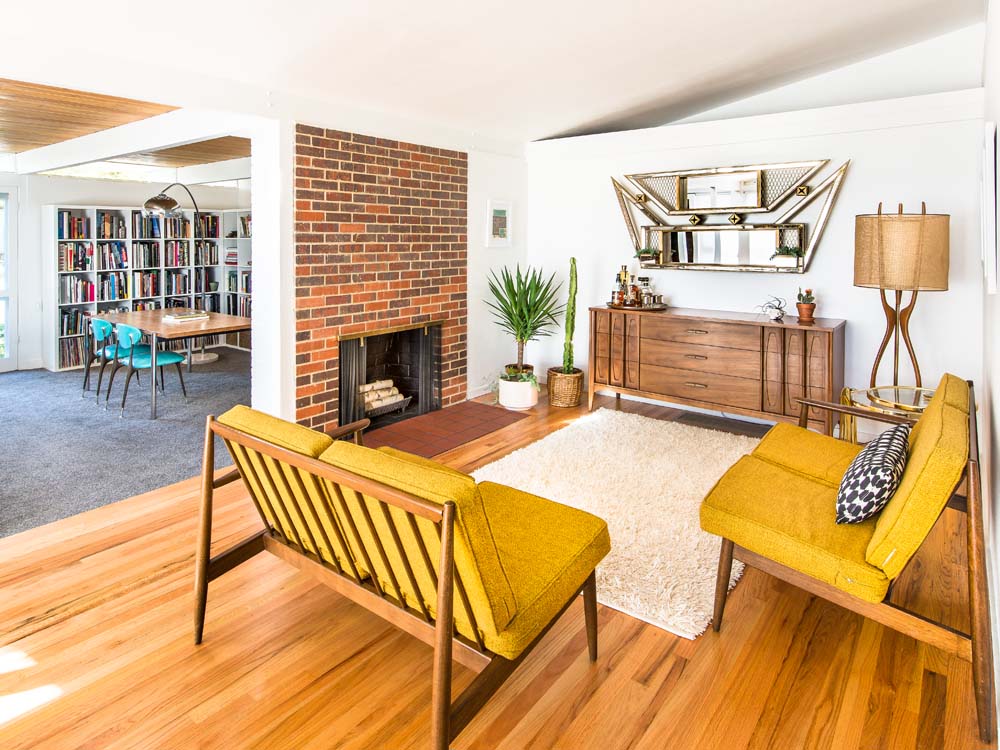 MAYDAY
Barely settled into a rental in Harvey Park, the St. Peters quickly fell in love with the neighborhood’s distinctive midcentury modern houses, and they set out on a mission to buy. But the market was tough on buyers; houses would sell in a matter of hours to flippers offering cash. The advice given to the newlyweds: beg, borrow, and steal to get a house right now. But for some sellers, preserving the integrity of a home is more appealing than cash. The St. Peters were in luck. 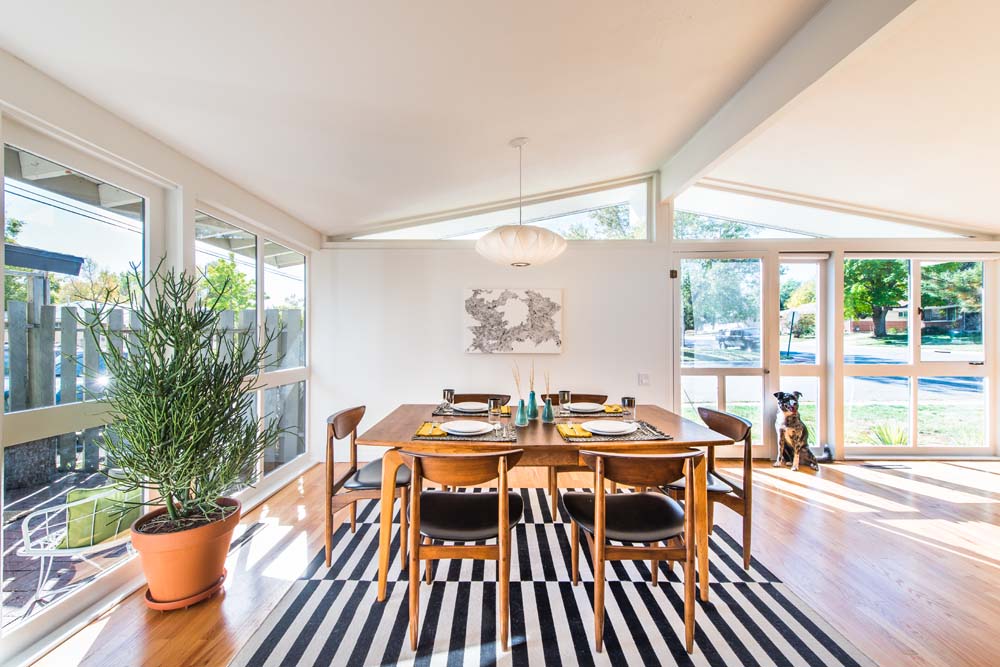 It was a corner lot. Cliff May architecture. A highly desirable L-shape floor plan and one of the largest homes in the neighborhood. But it needed a lot of work—work that would be respectful of its history and architecture. Its seller was adamant about that.

That seller was Judy. She lived in the home for decades and, fortunately for the St. Peters, was conscientious about the home’s fate—so much so that she rejected the offer of a flipper who had questionable intentions. Instead, in October 2014, the St. Peters walked away with the home. As it approached its 60th birthday, the house was passed on to a new generation—a young couple jumping into their first year of marriage with a massive project ahead of them. 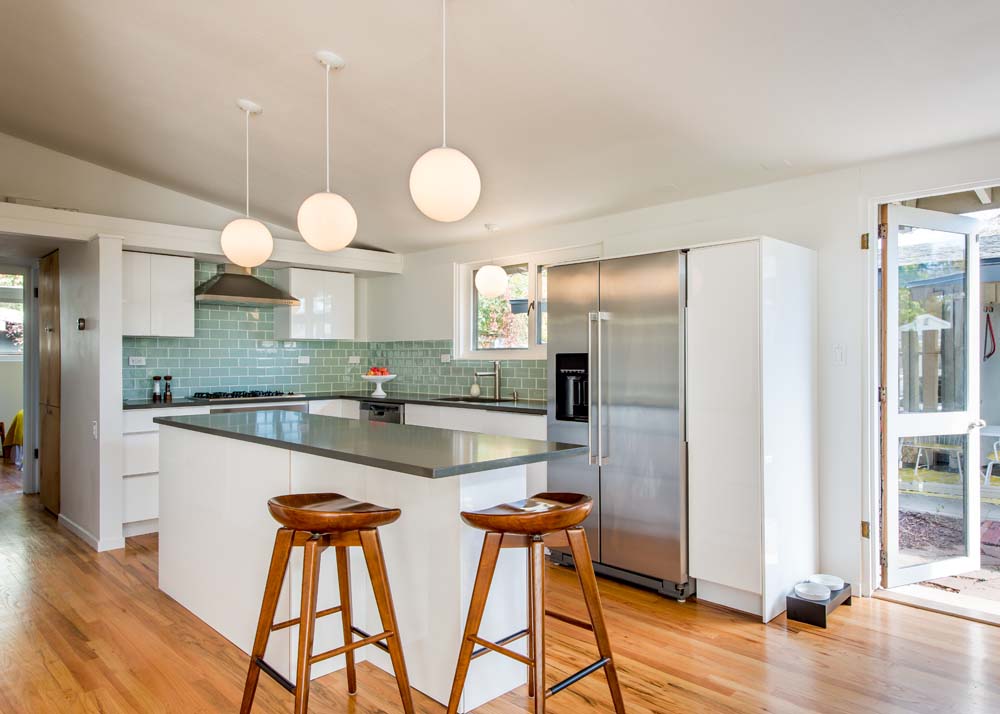 A LITTLE HELP FROM MY FRIENDS
They hadn’t even closed, and Judy, who is in her 70s, rolled up her sleeves alongside the St. Peters to help remove carpet, revealing wood floors below. And that was just the beginning. With the help of neighbors, friends, and family, the project came to life as a community effort—and is among the many reasons the St. Peters coveted the neighborhood. One Harvey Parker helped lay oak floors. Another helped with plumbing. The neighbors’ skills and their generosity played a large part in the St. Peters’ yearlong accomplishment.

But it was the help of Cole’s father that was most valuable to him. “I’ve always done this stuff with my dad,” Cole said. He helped his father on countless projects and was eager to initiate his own this time. Cole’s father, a professional electrician, helped on just about every part of the project. 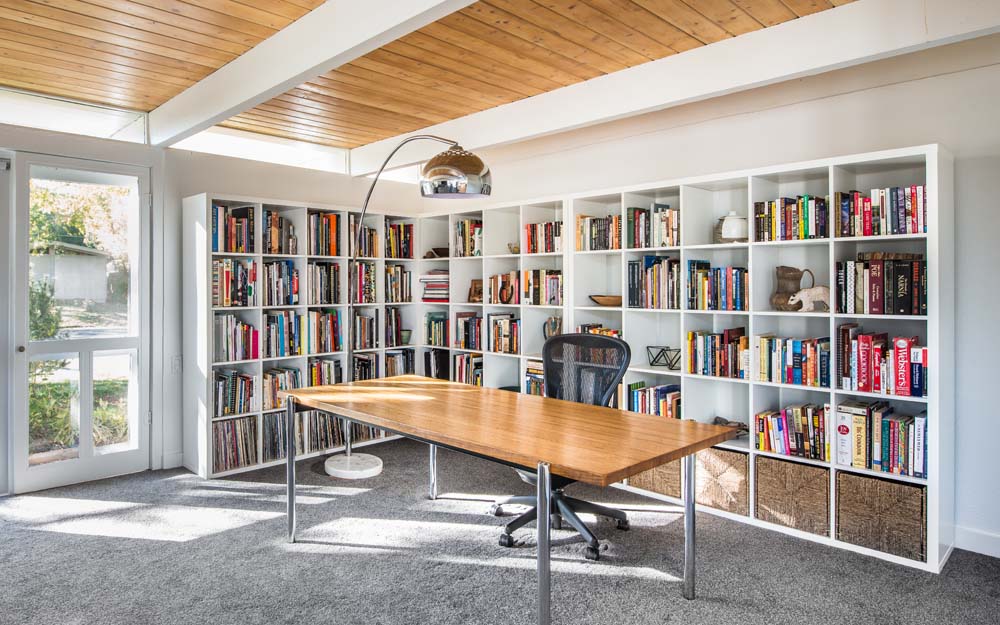 GETTING DOWN TO WORK
The St. Peters were steadfast about preserving the original architecture, and they wanted to be good stewards of their Cliff May home. Although the house was largely stripped down to almost nothing, the original wood floors stayed, as did the original exterior windows. “I love the windows,” said Danielle. “I love having all the natural light.” The clerestory windows add to that element. “It’s really cool that you can see trees and sky,” said Cole.

In the first days, the couple began demolition after work, removing walls to open the living space of the house. They discovered soffits with recessed fluorescent lighting hiding skylights, which they opened. The former hearth for an indoor grill in the den was removed, and the partial-height wall surrounding the kitchen—an original feature often demolished in Harvey Park’s Cliff May homes—was removed (with the help of a neighbor, of course). 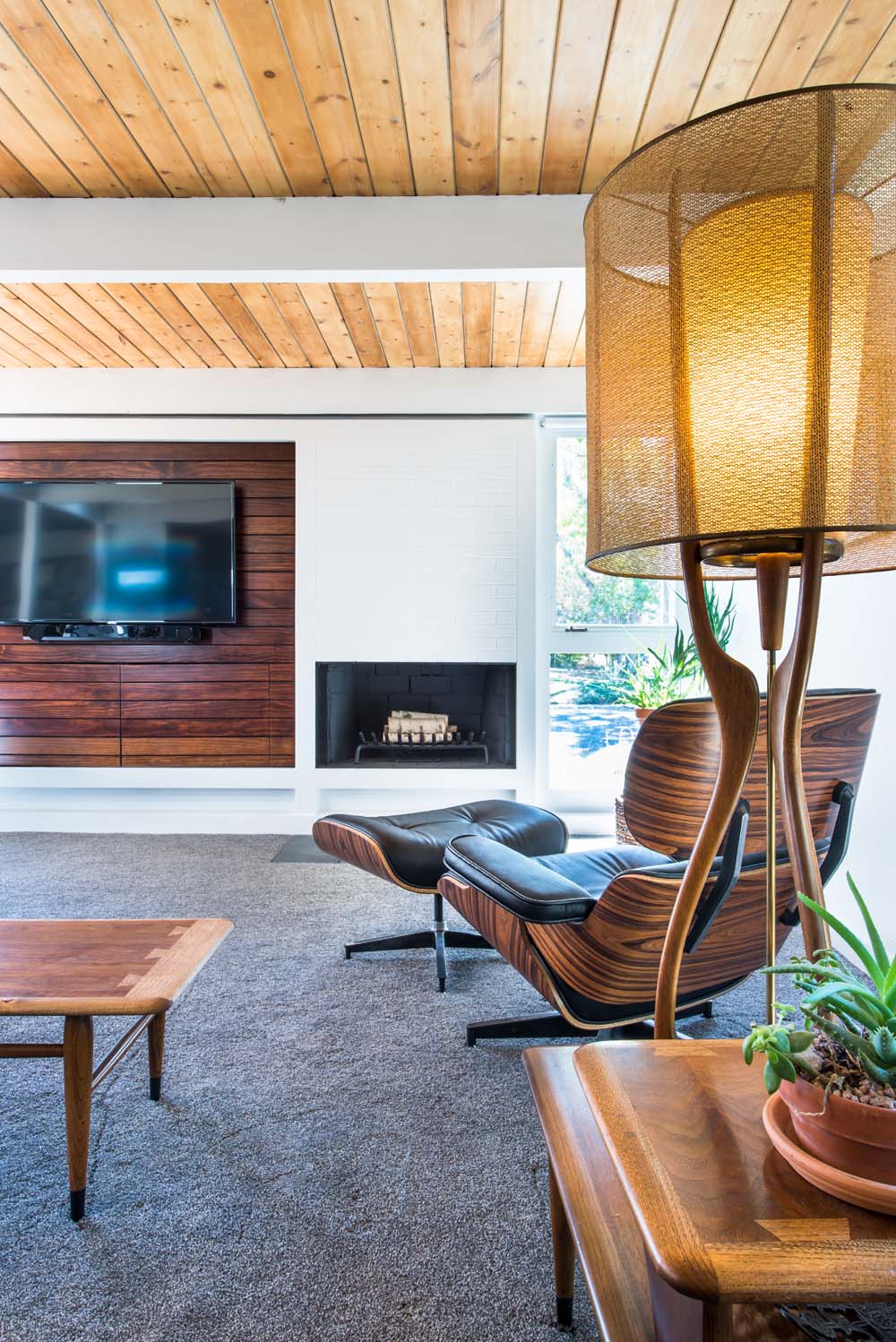 The bulk of the work involved removing elements that clashed with the original architecture. Walls were sanded to remove a heavy southwestern-style texture, both bathrooms received complete makeovers, and kitchen cabinets, counters, and appliances were replaced. Everything was repainted except the tongue-and-groove roof deck in the den, which was sanded to reveal its natural wood—the most time-intensive, yet rewarding project. The five-week undertaking required intense persistence, sanding in four passes and only half of three boards at any one time using a heavy belt sander. The work was made a bit easier—but a bit more precarious—by using the pair of stilts that Cole borrowed. “I did fall. Twice. And it was gnarly,” he said. Despite going against the advice of his father and just about everyone else, the results were worth it.

The electrical and plumbing systems were upgraded, with additional accent lighting added. The only work not done by the St. Peters and friends was the new roof and the refinishing of the wood floor—and only because they weren’t able to acquire the commercial-grade materials and equipment. In the end, their goal was accomplished: to let the home’s simple architecture come first, treating everything else as complementary. 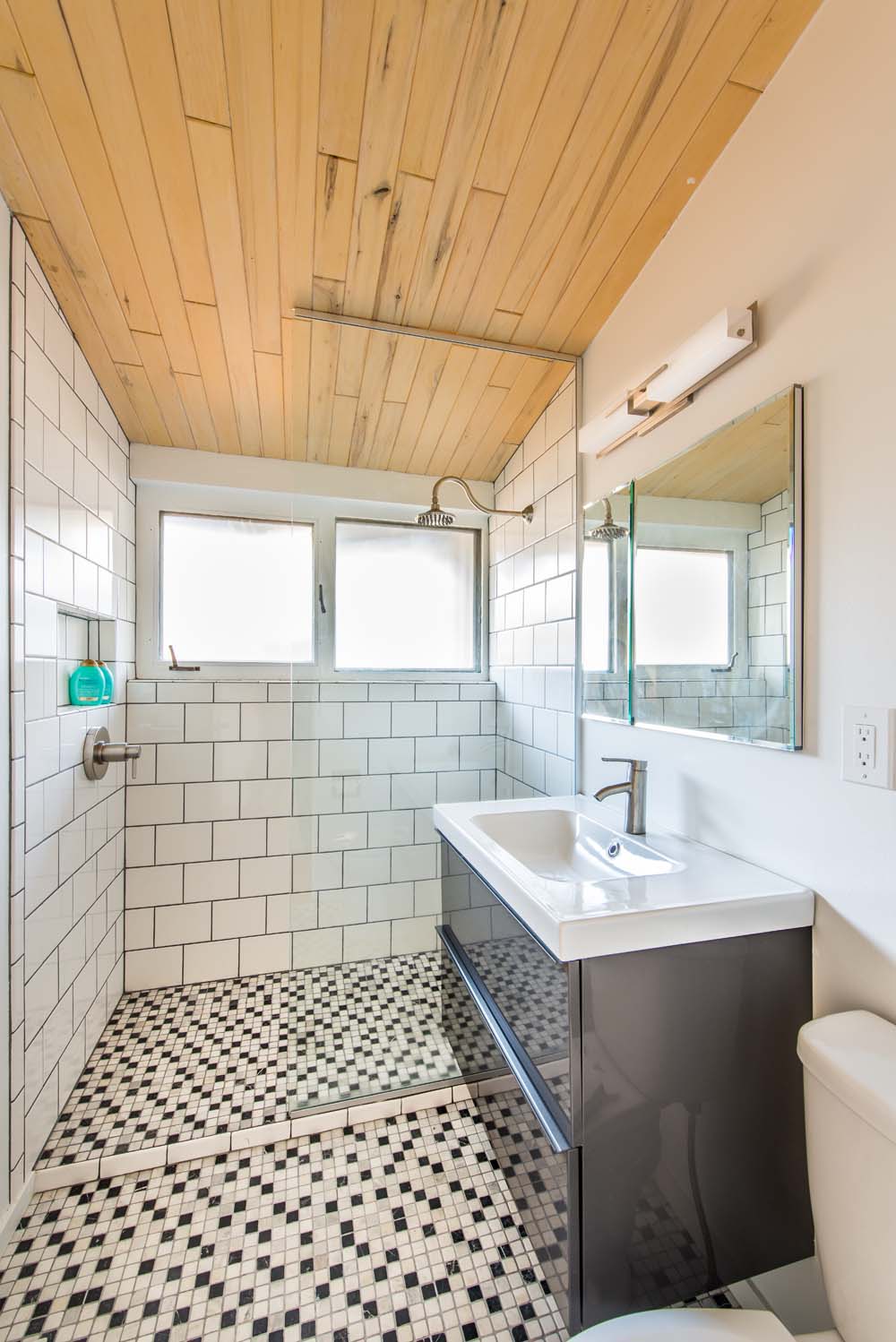 FINISHING TOUCHES
The success of the renovation is that it went beyond the sledgehammer and sanding. In addition to the structural work, the St. Peters tastefully outfitted the home with many mid-century modern furniture finds acquired from Craigslist, local picker “Mid-Century Mike,” and the Gone for Good store in Denver. “The inside of the house has been so much fun,” said Danielle. “I’ve never had a problem; we’ve always had a vision.”

Beyond the enjoyment with their Cliff May home, the St. Peters have come to enjoy Harvey Park. “There are just great people here—people who like to hang out and be a part of other people’s lives,” said Cole. And lucky for the neighborhood, they’ll be paying their good fortune forward. Said Danielle: “We’re getting to the point that we’re almost done, and now we can actually help someone else—now that we know how to do stuff!” 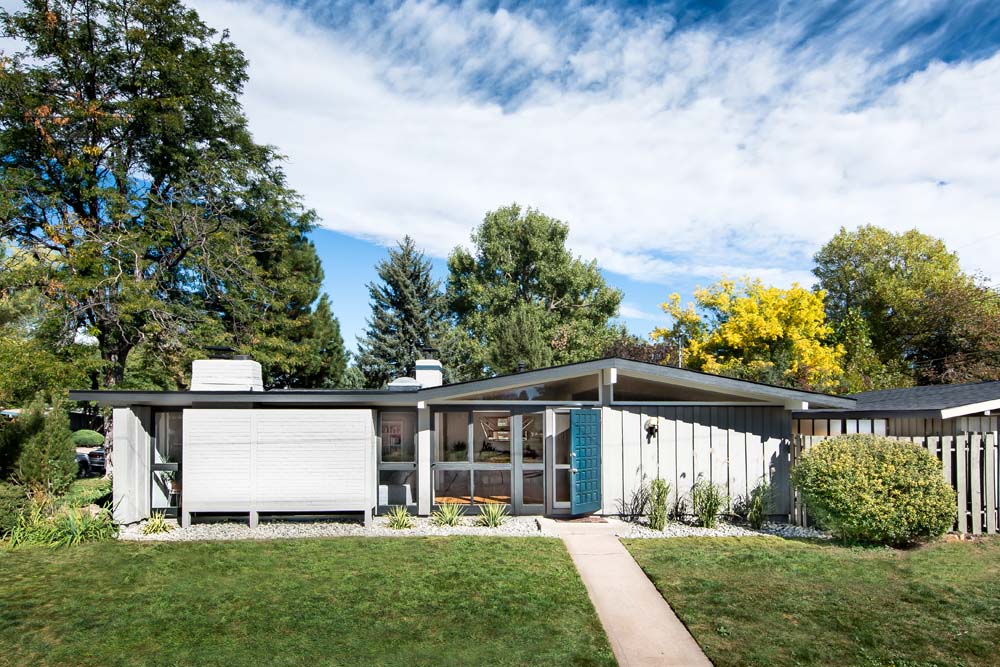