WHAT DO YOU GET WHEN YOU BRING TOGETHER THE COLORADO ARMY NATIONAL GUARD, THE UNITED STATES AIR FORCE ACADEMY, AND AN ICONIC MID-CENTURY ARCHITECTURAL HERITAGE? A CURIOUSLY BEAUTIFUL MILITARY INSTALLATION. ROGER THAT. 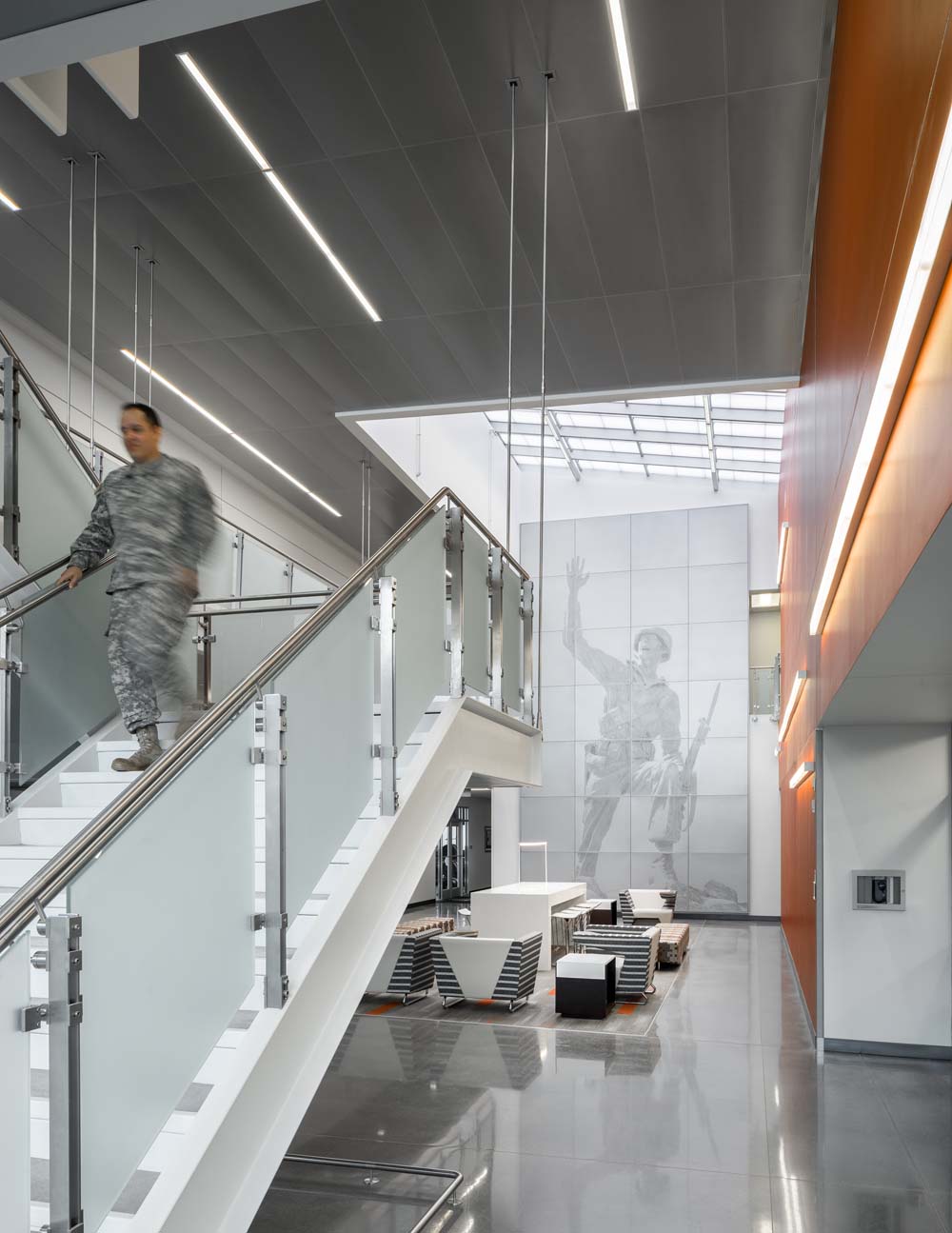 When called upon to design a new 63,000-square-foot building in the International Style, standard practice dictates that the architect pay close attention to material selection, the strategic use of rectilinear forms, and the creative deployment of wide-open interiors. As he began working on this project three years ago, Bob Datson was given a few additional directives. His facility needed modular classrooms, a commercial-grade kitchen, and plenty of administrative workspace. Plus, of course, there should be a secure place for all the rifles, pistols, ammunition, artillery, and night vision goggles. 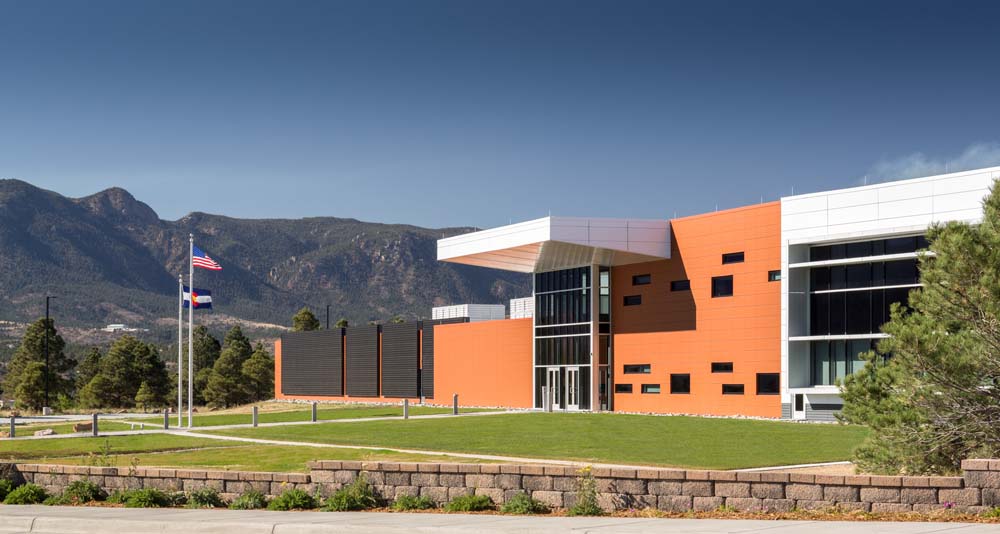 This job was going to be a little different, because this particular building is the last (and biggest) of five new Readiness Centers constructed throughout Colorado in recent years. Functionally, it is part-time home to approximately 350 soldiers in the Colorado Army National Guard, who descend for one weekend per month and two full weeks in the summer to immerse themselves in drills, education, and training exercises. Aesthetically, it has the good fortune to reside on the north side of Colorado Springs, situated on property close enough to the Air Force Academy that it owns the land, thus leading to a cooperative Army-Air Force partnership that would, in its own way, greatly influence the look and feel of the finished product. 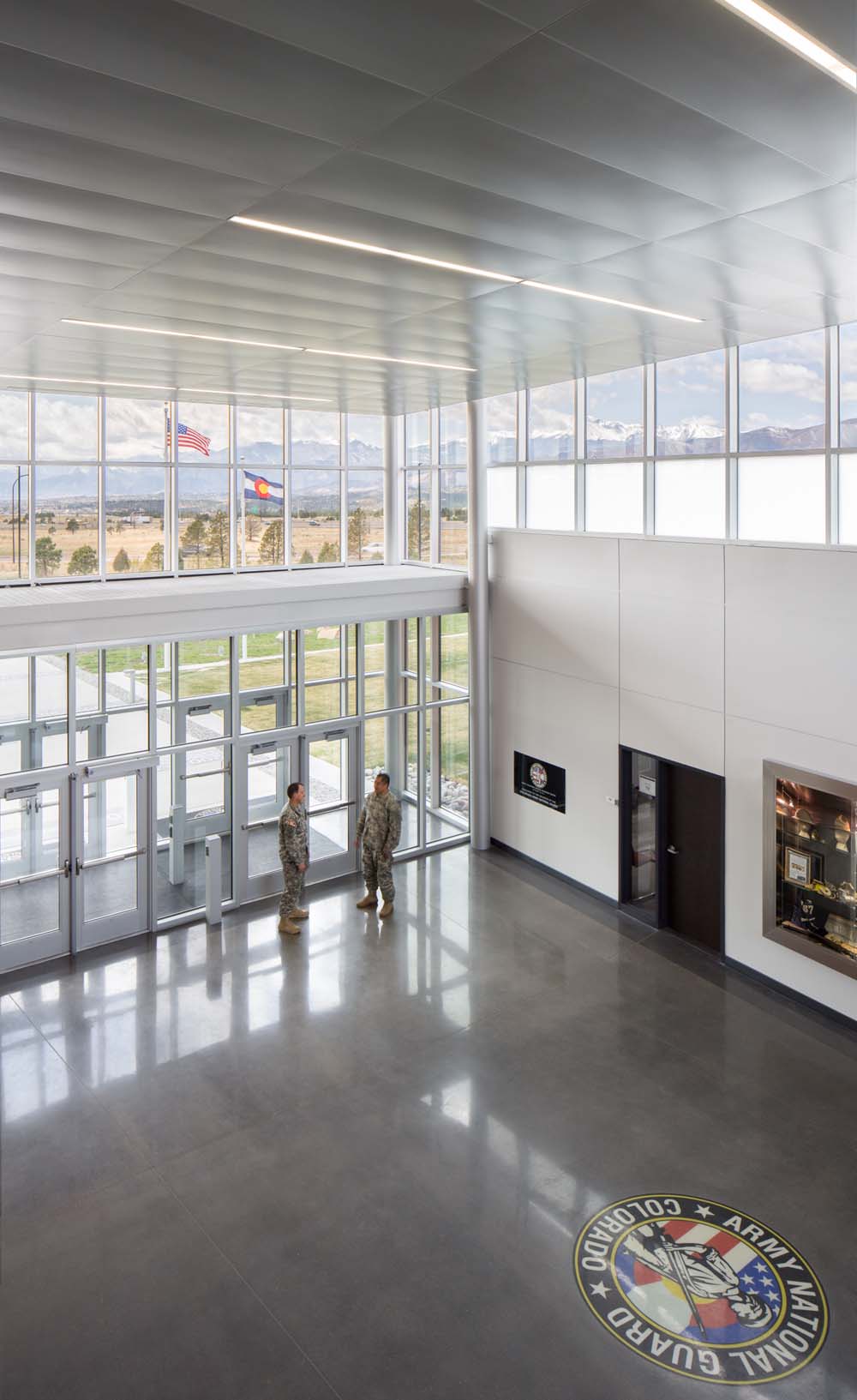 Datson is the Chief of Design and Construction at the Colorado Department of Military and Veterans Affairs, which means that he oversees, among other things, the creation of these Readiness Centers. Working in conjunction with local firms HB&A and Senger Design Group—not to mention senior military leadership—Datson brought to this project a distinct International flair to match the world-famous architecture of the nearby Academy. In fact, it hardly looks like a military installation at all. “In terms of conceptual design, we were given a group of pieces, such as classrooms, drill halls, supply cages, administrative areas, and so forth, and we were given his group of functions that we have to comply with,” said Datson. “But there are many ways to lay them out.” 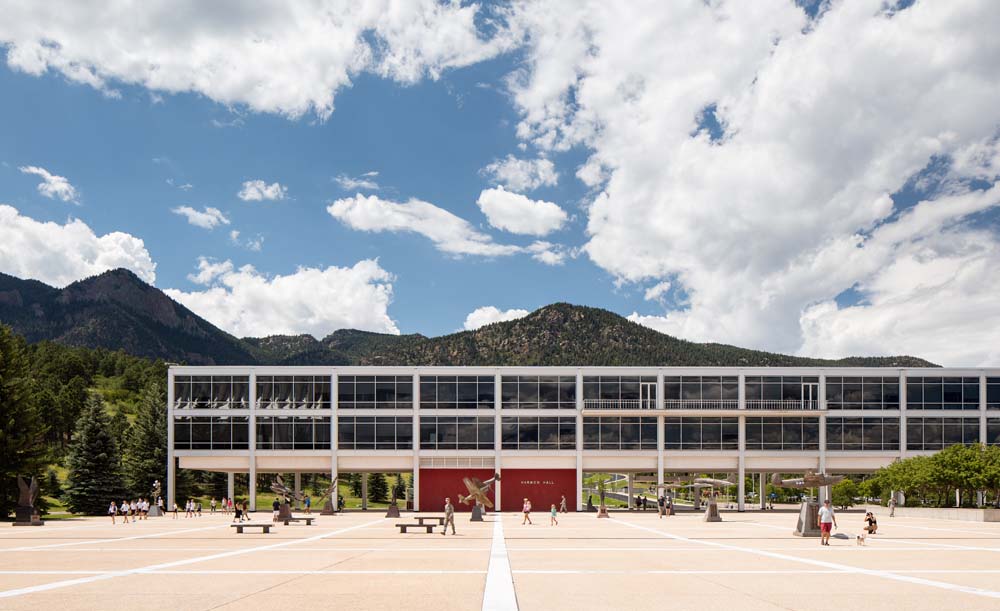 What they settled on was a slender, elongated building that makes good use of the property’s strong east-west orientation. This setup also allows for a more lineal organization in the overall building design, which suits the compartmentalized nature of the work, while also maximizing the natural contours of the topography. “Circulation-wise, it was a little more difficult, but you could see from the get-go that a strong International Style building could come from this kind of a linear layout,” he said. 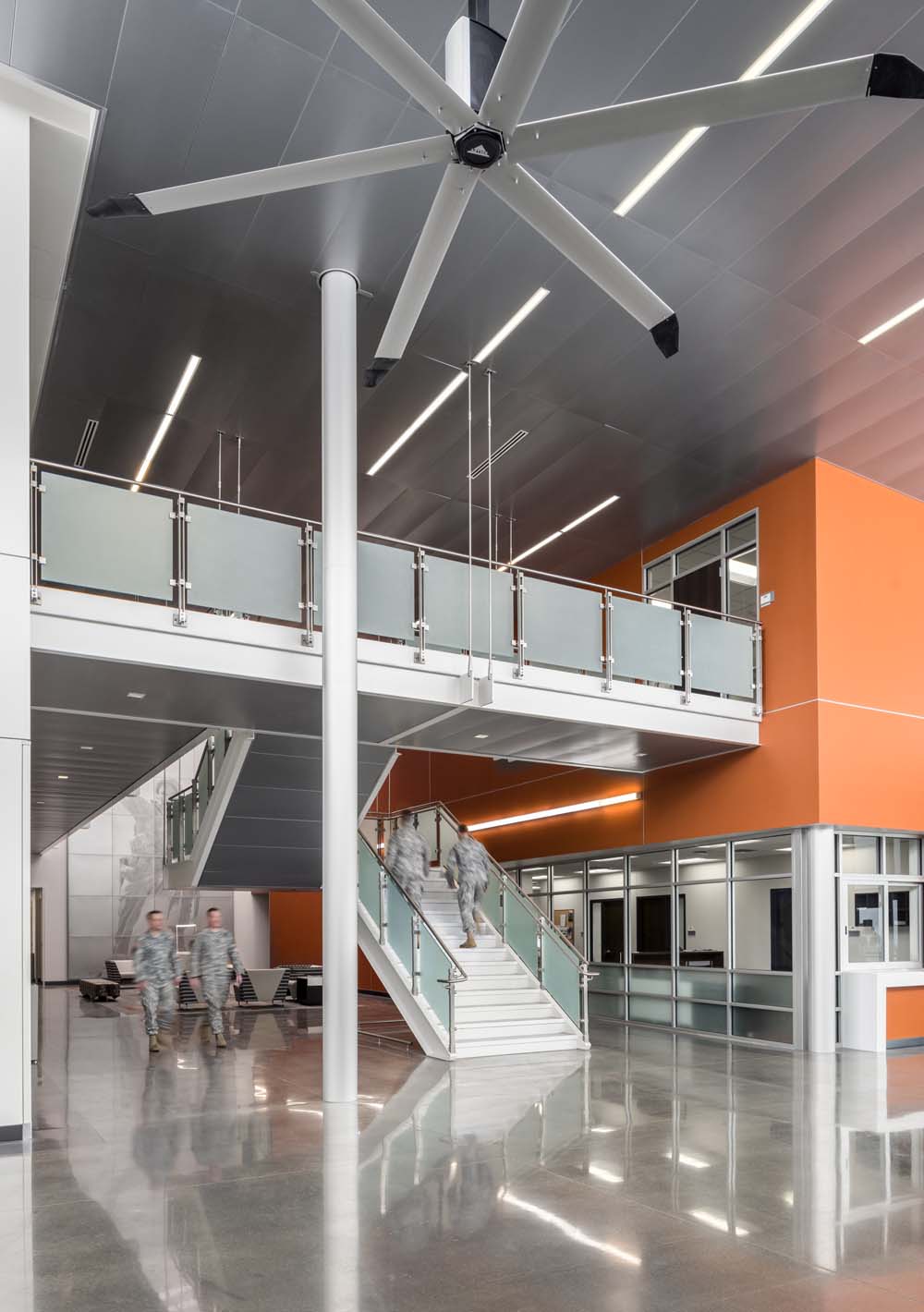 Inside, the front door opens to a spacious great hall framed by towering ceilings and polished concrete floors. The main level serves a number of pragmatic National Guard needs, from a weapons vault to a drill hall, though each is handled with a deft touch not generally associated with military facilities—large white columns add a touch of mid-century modernism, for instance. 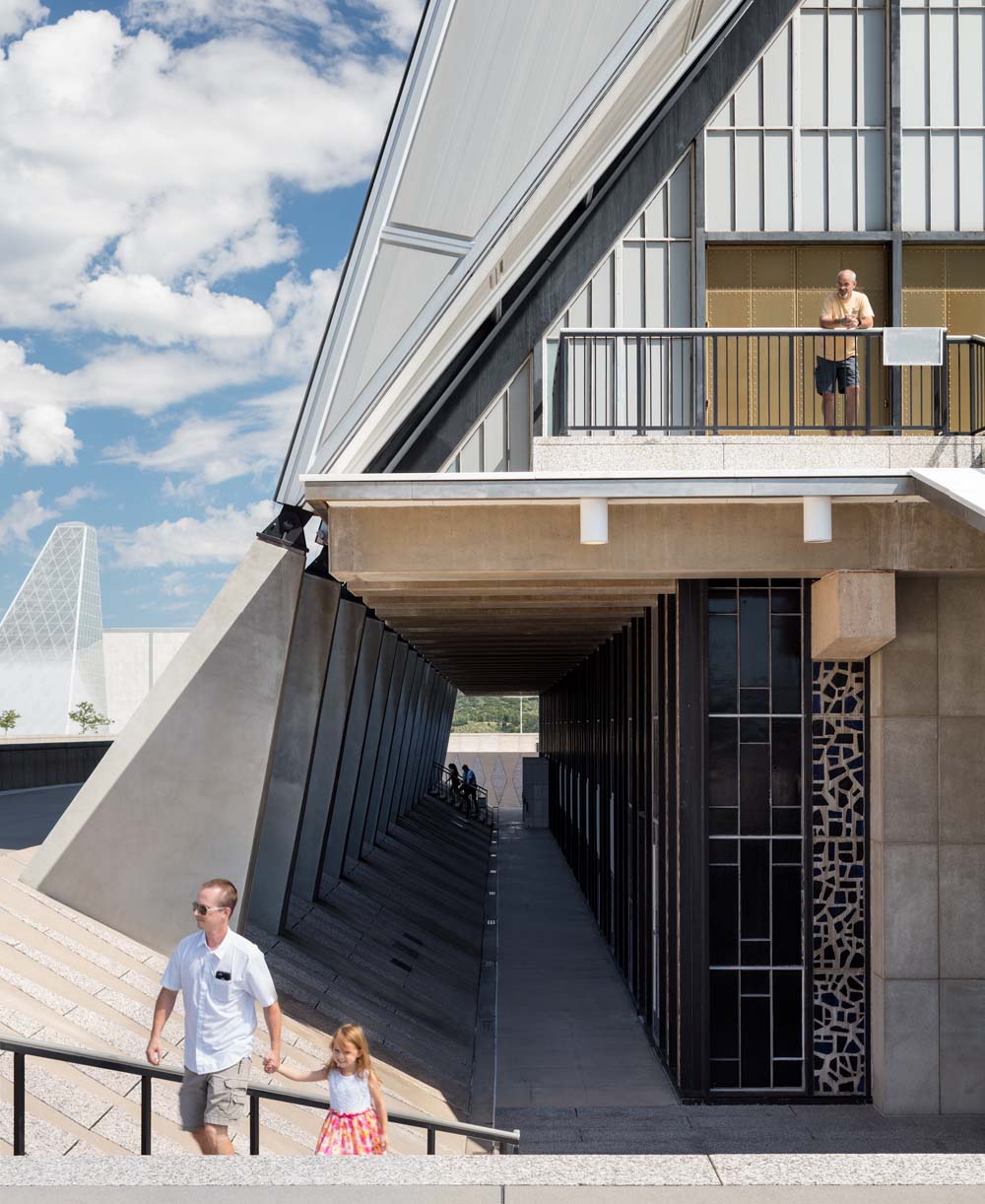 A Wi-Fi bar in the front commons rests at the feet of Iron Mike, a two-story soldier emblazoned across perforated aluminum panels backed with a black acoustic fiber. Unofficially, he provides the aesthetic heart of the facility and, as an enduring mascot for the U.S. Army, is perfectly positioned to inspire the infantry battalion stationed here since doors opened last October. He also serves as a bridge, tying together the main level and a second floor, which is comprised mainly of administrative offices, conference rooms, and medical facilities. 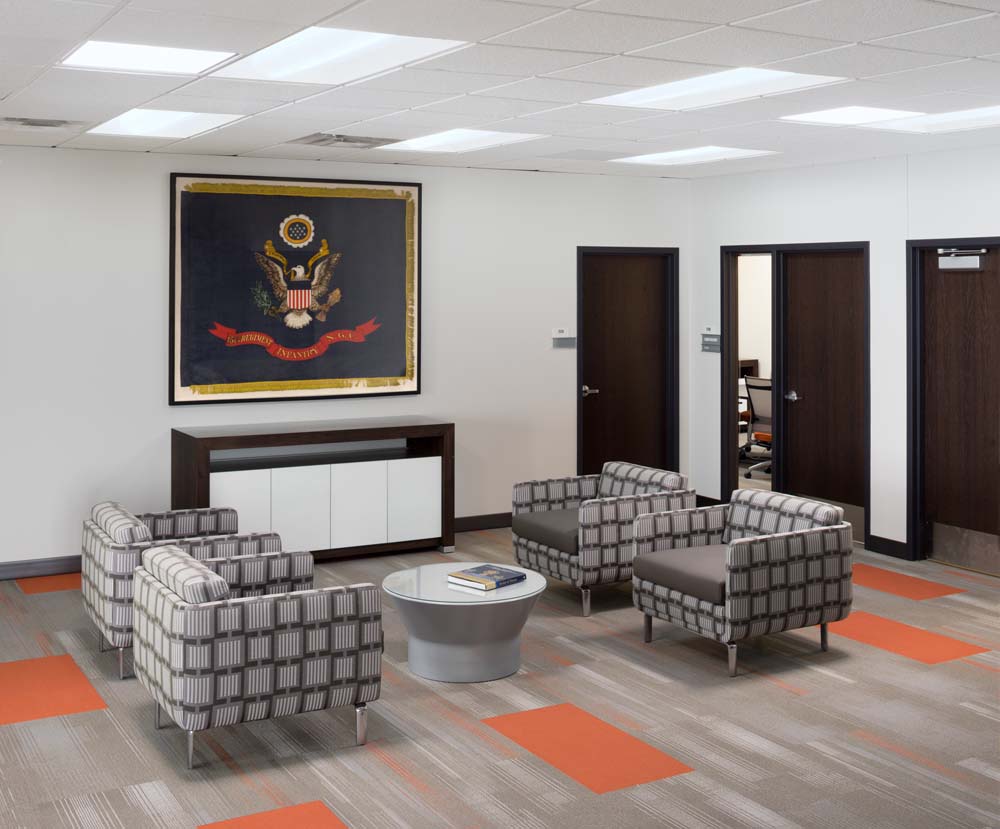 Still more impressive is the ability to marry both form and function with honest-to goodness sustainability. The North Colorado Springs Readiness Center is certified LEED Platinum, thanks in part to progressive flourishes like a geothermal heat pump, translucent roof panels, a building automation system, and transpired solar collectors. These features are complemented by the clever utilization of natural daylight throughout the building; classrooms face north and are equipped with an automatic dimming system, and each administrative office sports occupancy sensors that cut lights in empty rooms. Well-placed windows flood natural light so ubiquitously that daytime visitors might not notice the sparse need for artificial overhead lighting.

If this facility has achieved the dual goals of efficiency and aesthetically pleasing envelope, partial and indirect credit must also belong to Walter Netsch and the legendary firm of Skidmore, Owings & Merrill (SOM). When Netsch and his colleagues designed the nearby Air Force Academy campus in the 1950s and 1960s, they did so in bold, modern strokes that have endured. Of particular renown are the Dining Hall, Vandenberg Hall, and especially the Cadet Chapel (although the firm planned and designed the entirety of the campus at that time). Standing 150 feet, the chapel is enclosed at the upper level by 17 glass and aluminum spires, which are composed of 100 tetrahedrons each. It has been a tourist attraction for decades and won the AIA National 25 Year Award in 1996. 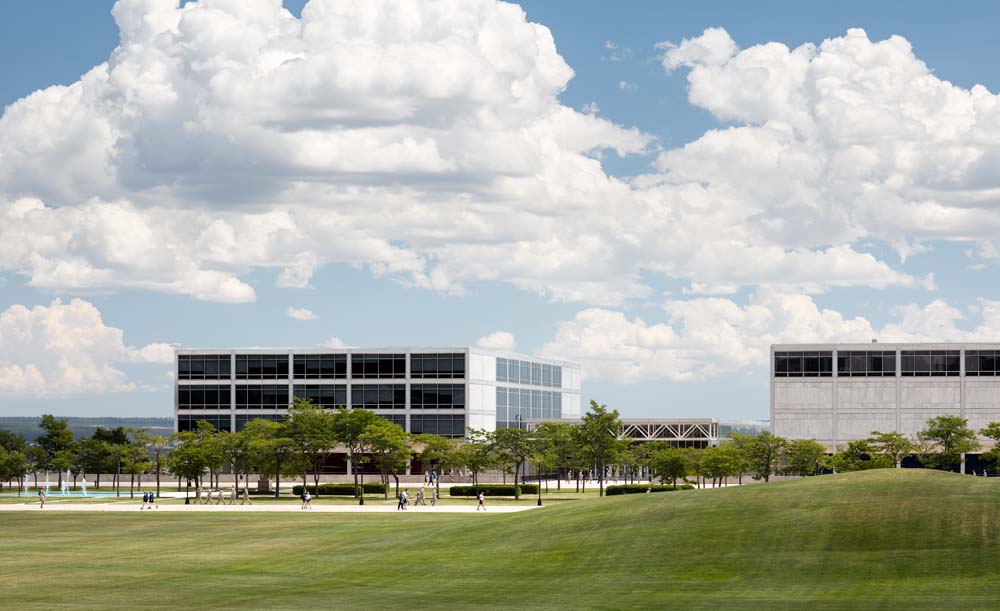 Displaying vision well beyond the drafting table, SOM foresaw suburban sprawl on the north side of Colorado Springs and sagely advised the United States Air Force to purchase as much land bordering their new academy as possible. That land had been hotly in demand for years, as it now borders a popular shopping center and several residential communities, but there were no plans to develop it until the National Guard came calling. This seemed a perfect place for the North Colorado Springs Readiness Center, but moving ahead only made sense if the building reinforced the International Style for which the Academy is so well known. 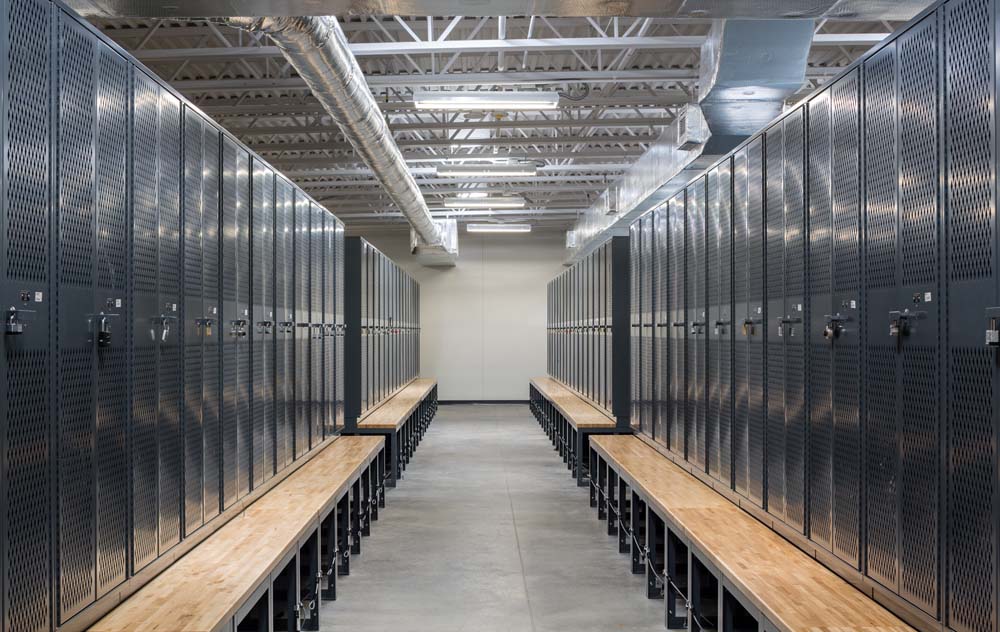 Datson was happy to comply, and in the execution of this plan, he tapped design firms already invested in the community: HB&A for the architecture and engineering and Senger for the interiors. “We believe in going out to local Colorado firms as best we can, and we’ve been successful with that approach,” said Datson. “We get dedicated service and people who believe in the axiom that you may drive your grandchildren by this building someday. So we benefit from keeping the dollars local, and we benefit from getting that local ‘ownership’ from our partners.” 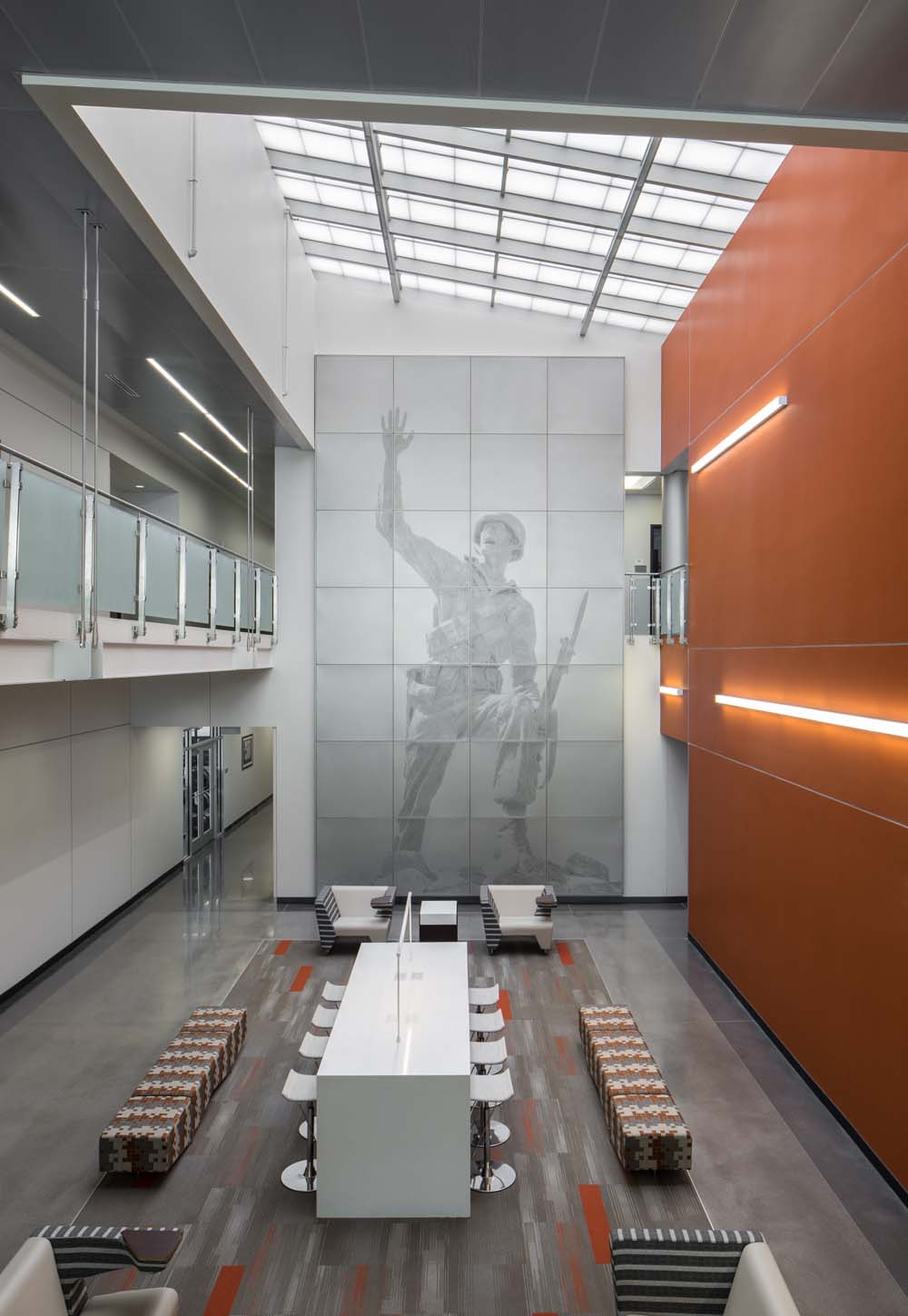 Not so long ago, when the nomenclature was a little more direct, these facilities were called Armories. In small towns, they often doubled as community centers, hosting Friday night dances and youth basketball games. The world has changed since then, but the Colorado Army National Guard has a vision for bringing the local community back into the fold. New Readiness Centers in Fort Lupton, Alamosa, Windsor, and Grand Junction have already begun hosting events, including weddings, and the hope is that this facility will, too. It was certainly designed and built with an eye toward maximum efficiency for the soldiers who spend their days and weekends here—but also with a thoughtful aesthetic grandeur that blends seamlessly into the iconic architecture of the Air Force Academy just a few miles up the road. And, with any luck, it may soon draw the neighbors in, as well.