HORSEPOWER—IT’S NOT THE TERM YOU’D TYPICALLY ASSOCIATE WITH A KITCHEN. HOWEVER, THANKS TO THE COLLABORATION BETWEEN PORSCHE DESIGN STUDIO AND POGGENPOHL ON THEIR AWARD-WINNING P’7350, ENGINEERING EXCELLENCE TRANSCENDS TRADITIONAL DEFINITIONS. BUT WHAT DROVE THESE TWO ICONIC BRANDS TO COME TOGETHER? WHAT’S UNDER THE HOOD? AND, MOST IMPORTANTLY, HOW DOES IT HANDLE? WE SPENT SOME TIME WITH THE P’7350 AT STUDIO 2B IN RINO TO FIND OUT. IF YOU’VE EVER WANTED TO TEST-DRIVE A KITCHEN THAT GOES FROM ZERO TO BREAKFAST IN THREE SECONDS FLAT, NOW’S YOUR CHANCE. 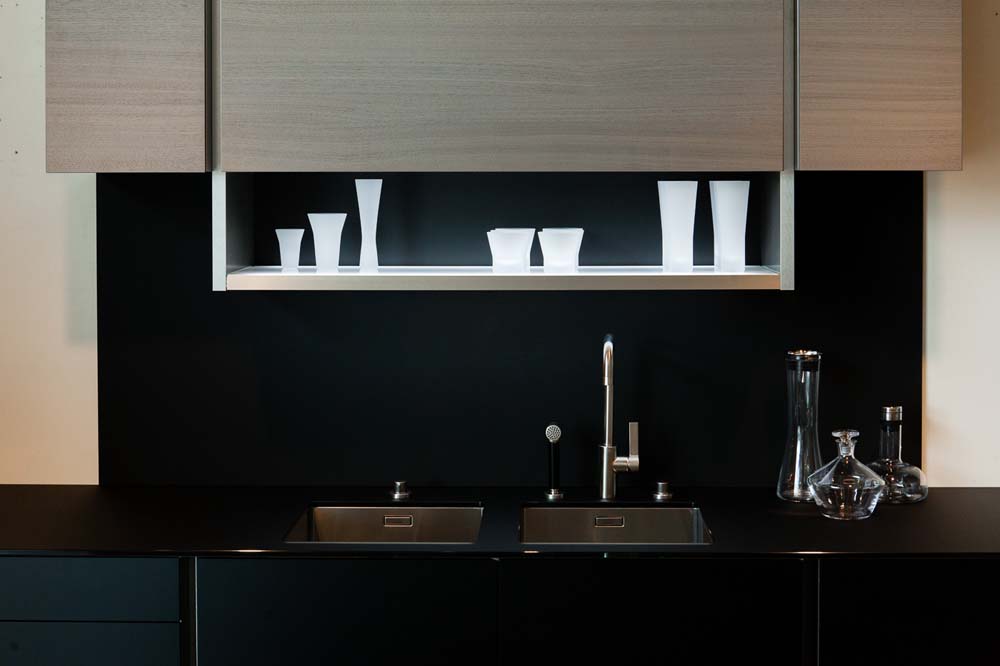 “IF YOU ANALYZE THE FUNCTION OF AN OBJECT, ITS FORM OFTEN BECOMES OBVIOUS.” THESE WORDS BY PROFESSOR FERDINAND ALEXANDER PORSCHE HAVE UNDERSCORED THE PORSCHE DESIGN STUDIO PHILOSOPHY SINCE ITS FOUNDING IN GERMANY IN 1972. WITH LONG-STANDING EXPERIENCE IN HOME APPLIANCES AND FURNITURE, THE STUDIO CARRIES THE PORSCHE REPUTATION FOR PERFORMANCE WELL BEYOND THE GARAGE. IT SHOULD SURPRISE NO ONE, THEN, THAT PROVOCATIVE DESIGN, INNOVATIVE FUNCTIONALITY, AND MATERIAL EXCELLENCE TRANSPOSE MELLIFLUOUSLY TO THE KITCHENS OF FELLOW GERMAN HIGH-END MANUFACTURER POGGENPOHL. ESTABLISHED IN 1892, POGGENPOHL IS NOT ONLY THE OLDEST FURNITURE BRAND IN GERMANY, BUT IT’S ALSO A LEGACY COMPANY WITH AN ELITE INTERNATIONAL REPUTATION. THE RESULTING COLLABORATION IS THE 2015 RED DOT AWARD-WINNING P’7350, AN AERODYNAMIC UPGRADE TO THE STOCK COOKING EXPERIENCE. 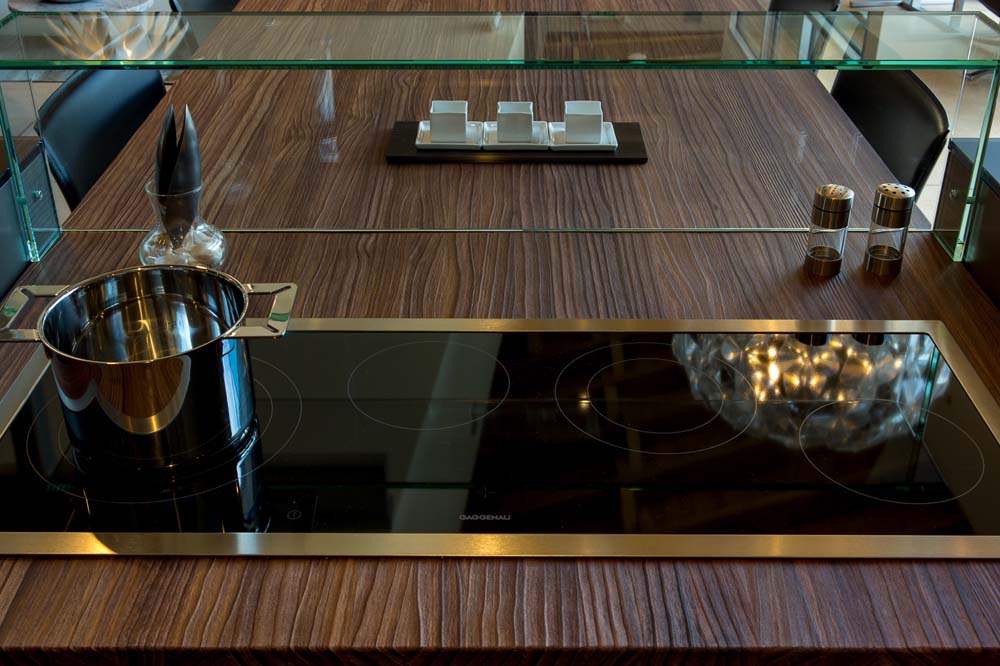 Food prep, however, is just one part of the Porsche/Poggenpohl recipe, according to Studio 2b owners Samantha and Allen Bales. The design philosophy is one of integration, defying conventional distinctions between cooking, eating, and living spaces. Precise to personal specifications, it’s hard not to feel an unencumbered undercurrent of movement stepping inside the P’7350. Like strapping into a 911, everything is exactly where it should be, optimized for function. “It’s the idea of the ‘fitted kitchen’—customizing components to the space and to the individual,” said Samantha. “It should look and be fit to the person, as they’re the one working and living there every day.” 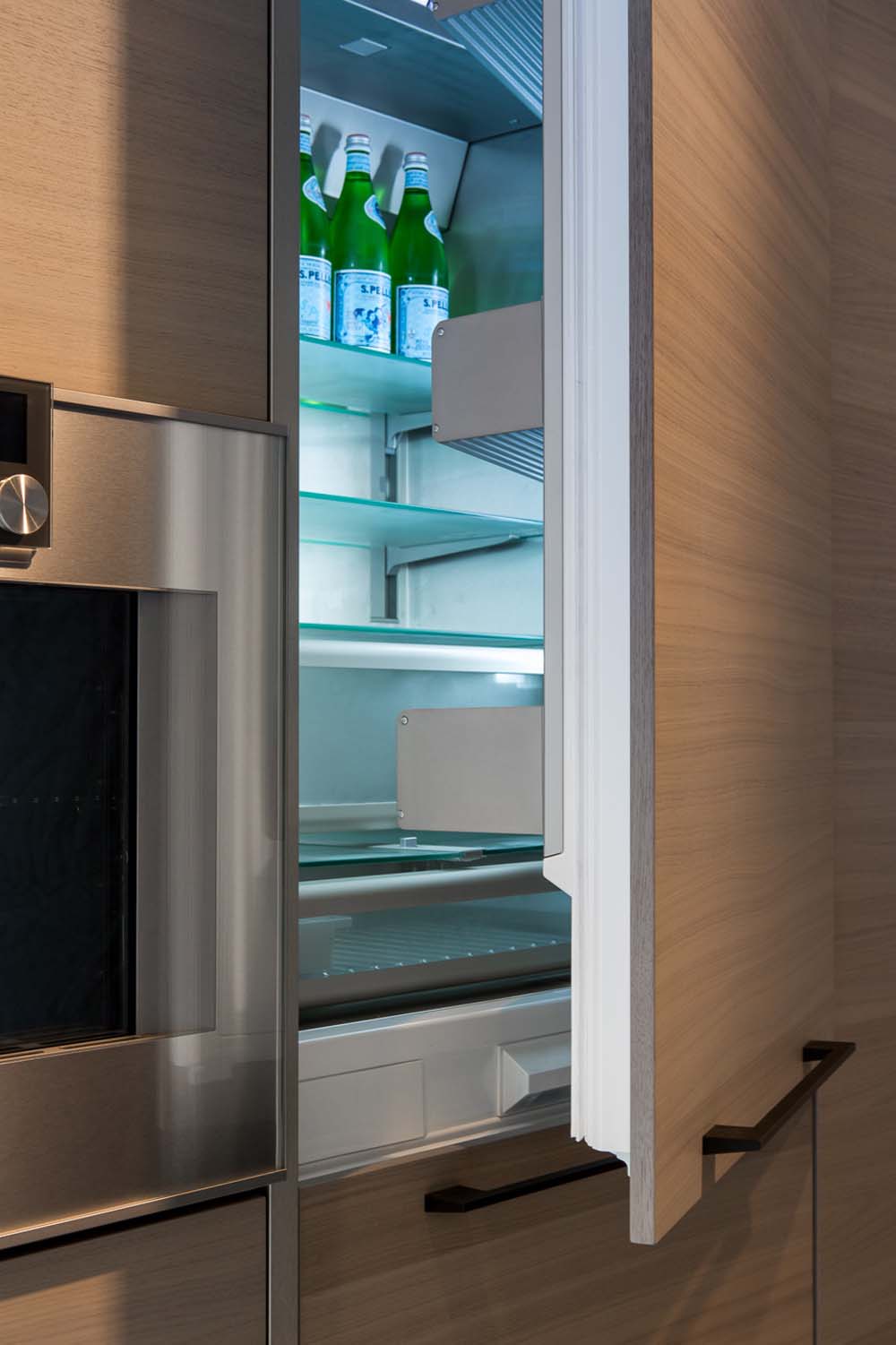 This resulting “design for life,” as Poggenpohl describes it, results in signature elements such as a lowered cooktop flush with the attached dining table. Eye-catching for its unconventional height, it quickly becomes obvious that the lower setup accentuates both the plane of vision into cookware directly below and economizes the distance arms need to travel to reduce your roux. Separated from the attached dining table by an elegant transparent glass top (reminiscent of an infinity pool’s edge,) the cook is in good company by always being part of it. The interplay of organic and machined acuity gives a livability and warmth, customizable with the neutral-tone surface options. “We’ve heard from many clients who love the integration of the solid oak table into the kitchen,” said Samantha. “It’s a great mix of organic texture with the overall sleekness.” 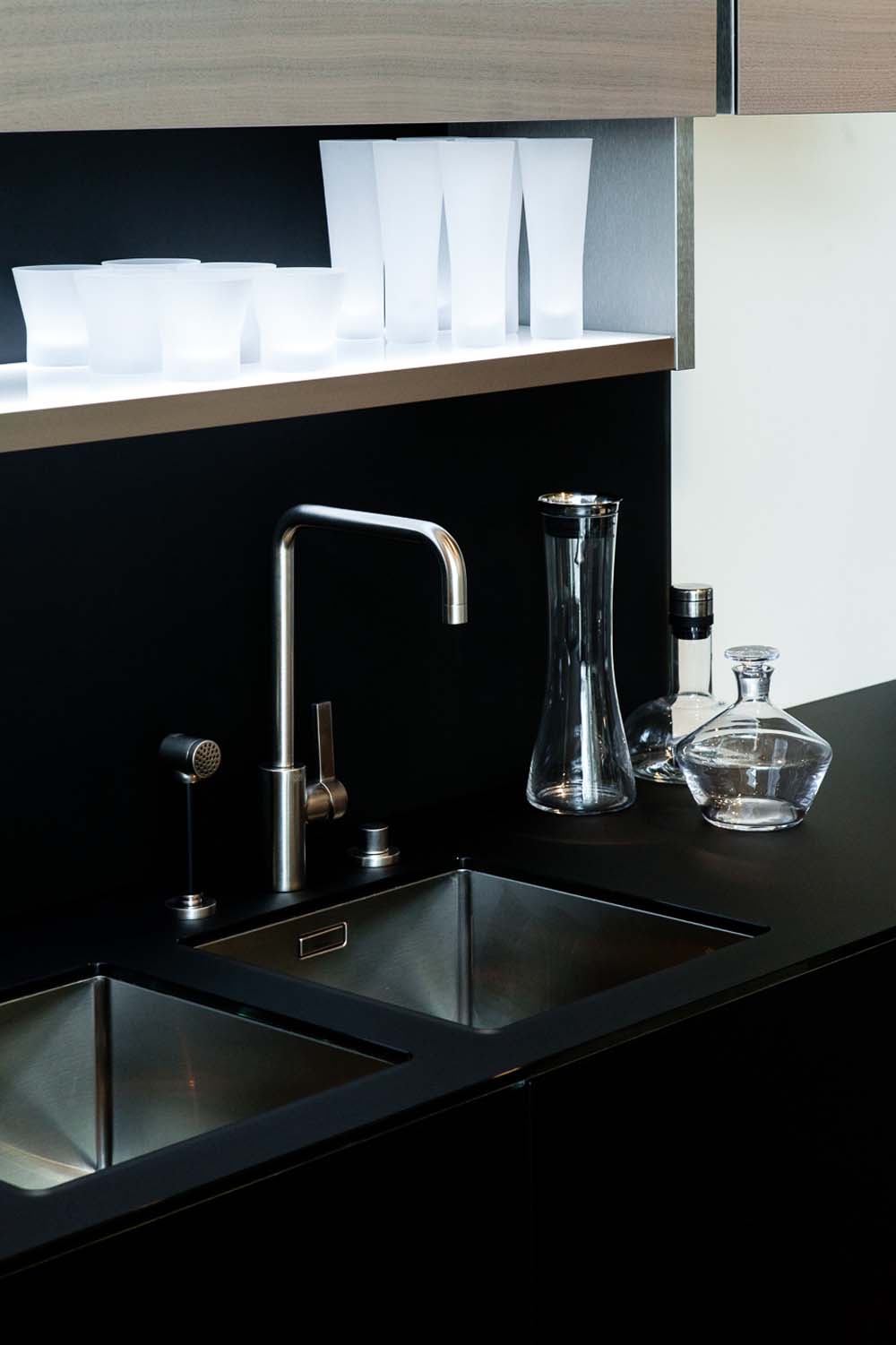 This sleek chic is a continuation of Porsche and Poggenpohl’s 2008-lauded, limited-edition P’7340, with the newest iteration adding the dining space and unique mitering to serve as signature components of the space. Horizontal and vertical line interplay is the predominant aesthetic, found in simple but powerful filigree and finish. Anodized aluminum boxes are topped with durable satinized glass countertops, which resist fingerprints and offer quick cleanup. Proprietary components include 45-degree angle edges on cabinet doors, which make aerodynamic flush closures befitting of a Porsche. Another defining component unique to the partnership is the descending blades above the sink, a single piece of stainless steel-effect brushed aluminum that creates depth. Outfitted with LEDs, it’s adjustable to differing light warmth effects. 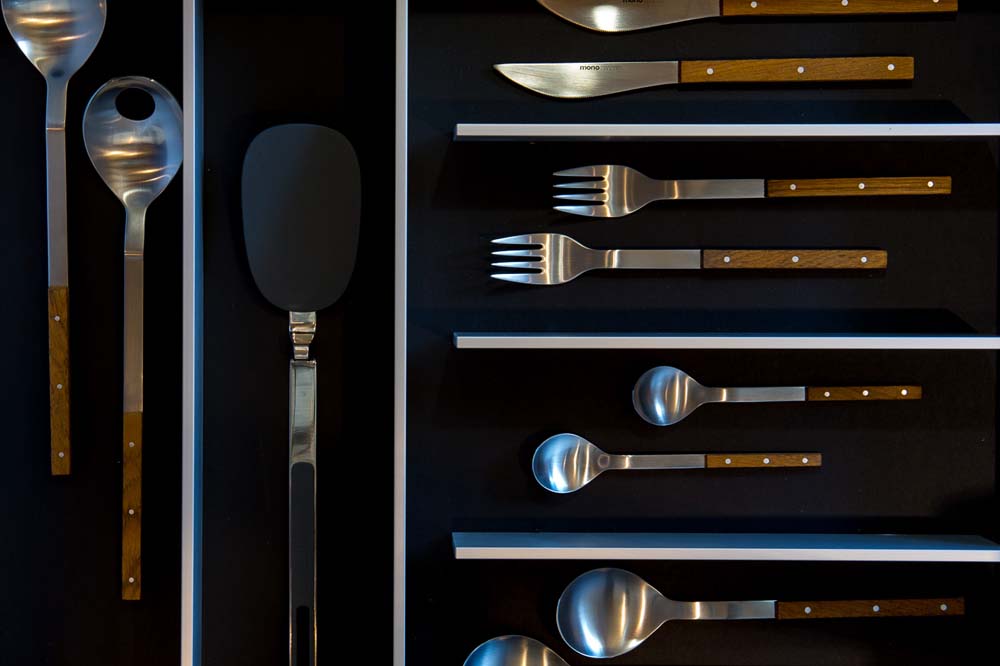 Other innovative components have quite literally set standards—the metal drawer designed specifically for the Porsche project was so integral that Poggenpohl now uses it in all of its lines. “The drawers are so strong, you can stand in them,” said Samantha. Unless you’re already outfitted with the P’7350, this test—like a stunt drive—is probably best not tried at home. A bottom-based glide system goes beyond the standard soft-close, allowing for optimized internal storage space. Aluminum and walnut dividers create customized configurations great for glasses and pans, and the magnetic knife holder keeps cutlery sharply aligned. The extremely thin profile belies the strength and durability of the drawers; you might not think of stocking your entire bar within one, but as Studio 2b demonstrated, that’s the kind of high-performance you can expect from this kitchen (and really the only time it’s okay to have a drink before jumping into a Porsche). 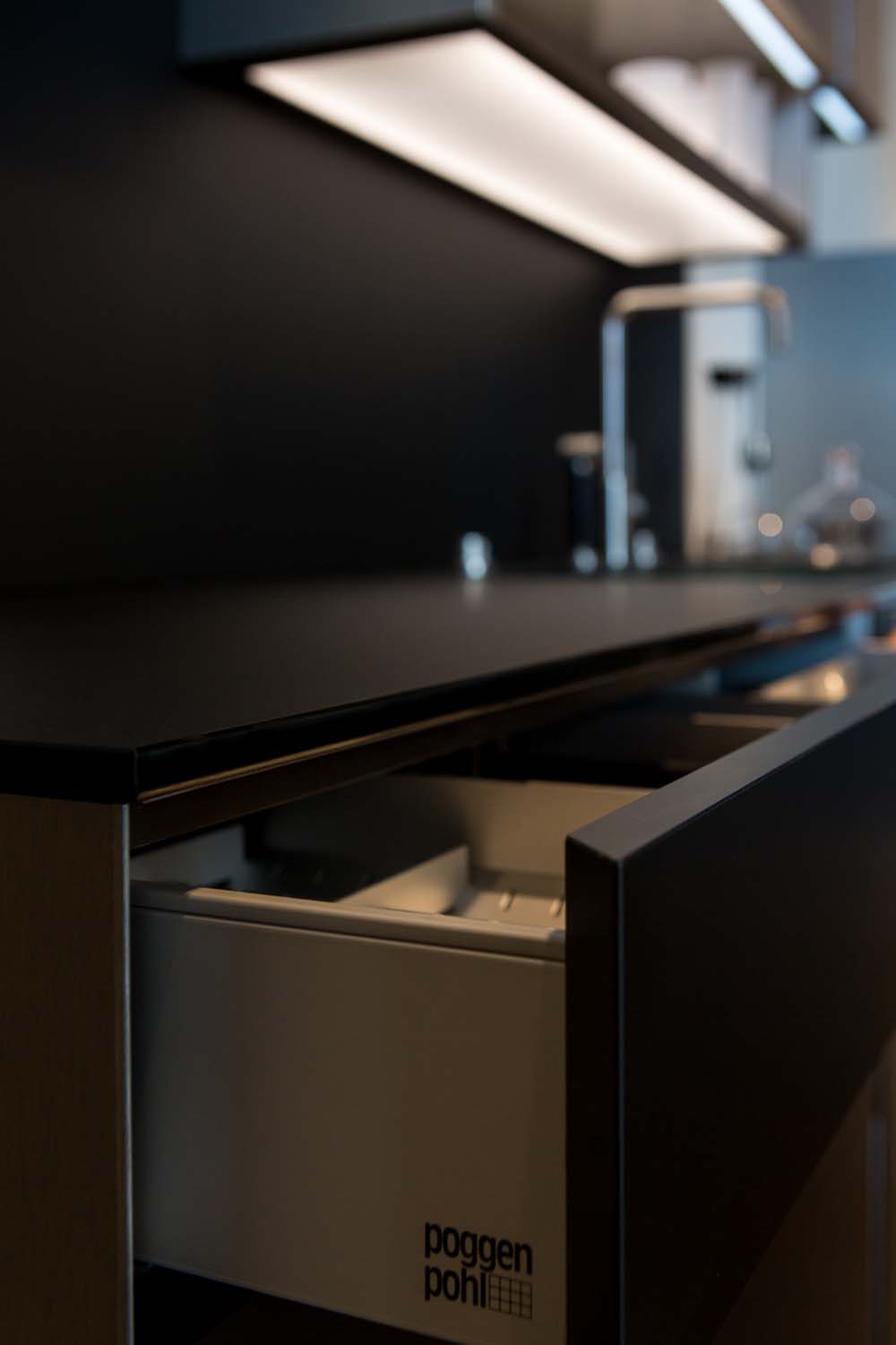 Another noteworthy element is conspicuously absent: handles. Push-open appliances and cabinets featuring Blum lift systems operate without added visual interruption. Flush linearity of the layout is complemented by Gaggenau appliances integrated by Studio 2b, resulting in smooth, fluid aesthetic movement throughout the space, from drawer to dishwasher. The one notable caveat is the refrigerator and freezer handle created exclusively for the P’7350. Solid metal and horizontally aligned, the placement reduces arm movement needed to open the door to a minimum, in addition to accentuating the overall dedication to delicate lines. It’s this interplay that evokes a visceral reaction from showroom attendees, said Allen. “The technical proficiency has a tactile element to the surfaces and tops,” he said. “People want to touch the textures, much more so than typical composite or granite surfaces.” 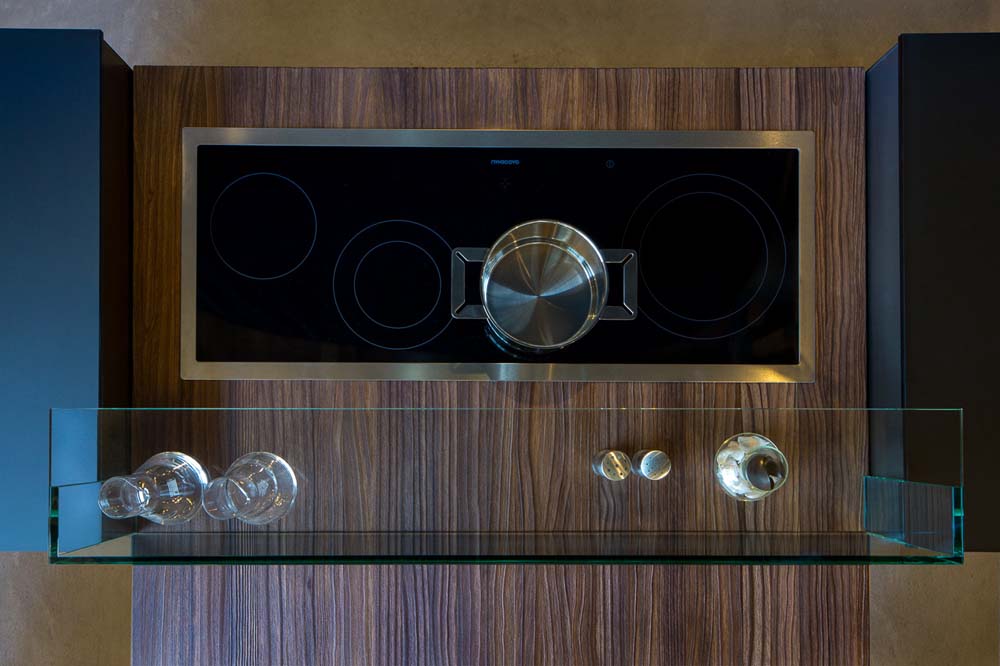 Quality components make a quality kitchen, but cannot do so alone—the artisanship is in the arrangement. That’s why it makes perfect sense for two distinct design icons to come together in the P’7350. The orchestration of livability hearkens back to the effective marriage of form defined by function found in the Porsche Design philosophy and Poggenpohl’s track record of excellence. Or as Samantha stated, “a beautiful car you can’t drive is just a piece of art.” Thankfully that’s not the case in the P’7350, which marries form, function—and horsepower—in a kitchen design that really cooks. 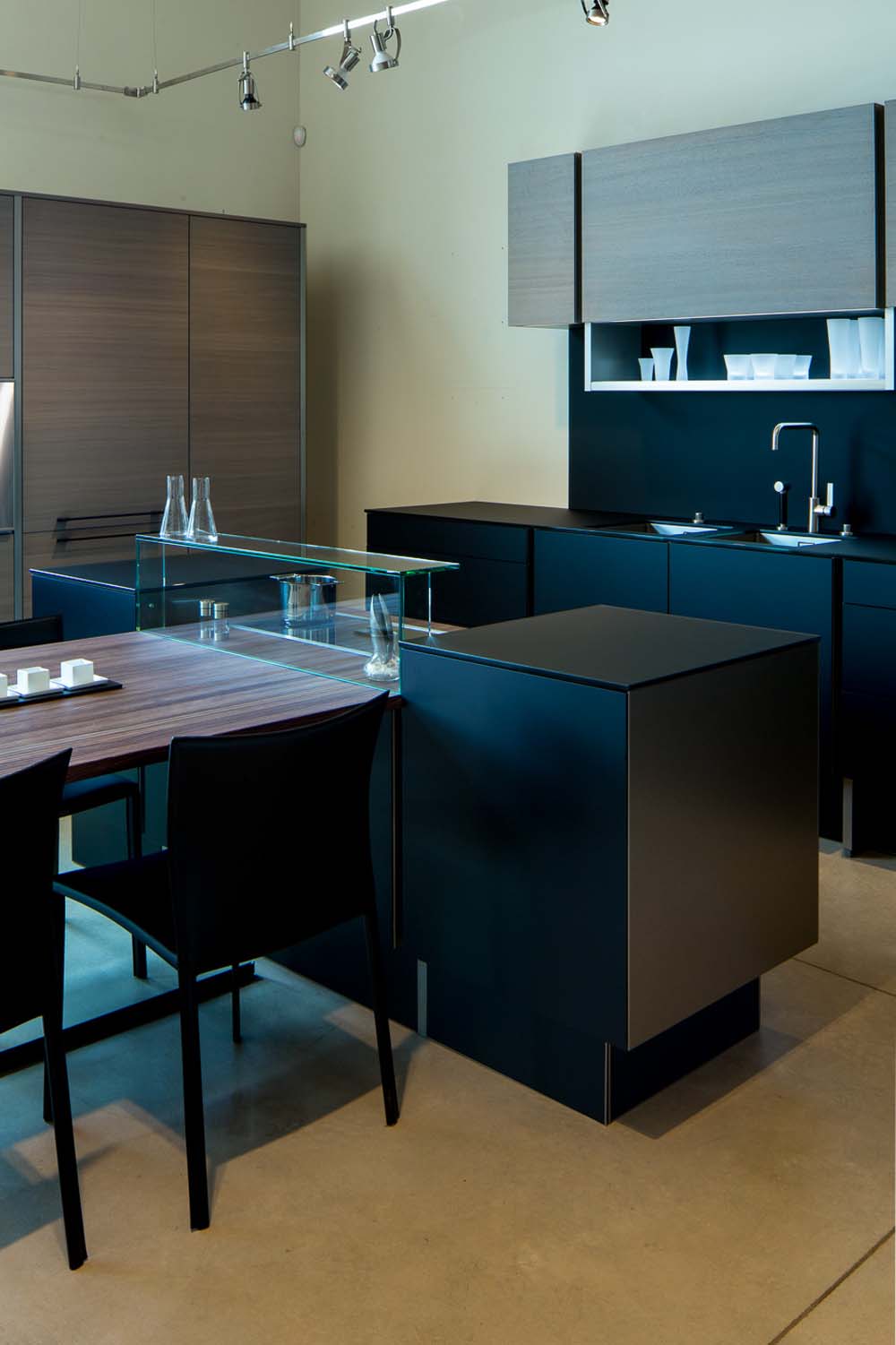