NESTLED IN THE LAKESIDE COMMUNITY OF BOW MAR SITS A HOUSE THAT SEEMED BEYOND REPAIR. BUT WHERE MOST SAW ONLY NEGLECT, ONE DETERMINED FAMILY GLIMPSED A CHALLENGE WORTHY OF THEIR FULL ATTENTION. THIS HOME NEEDED EVERYTHING. THAT’S EXACTLY WHAT IT GOT. 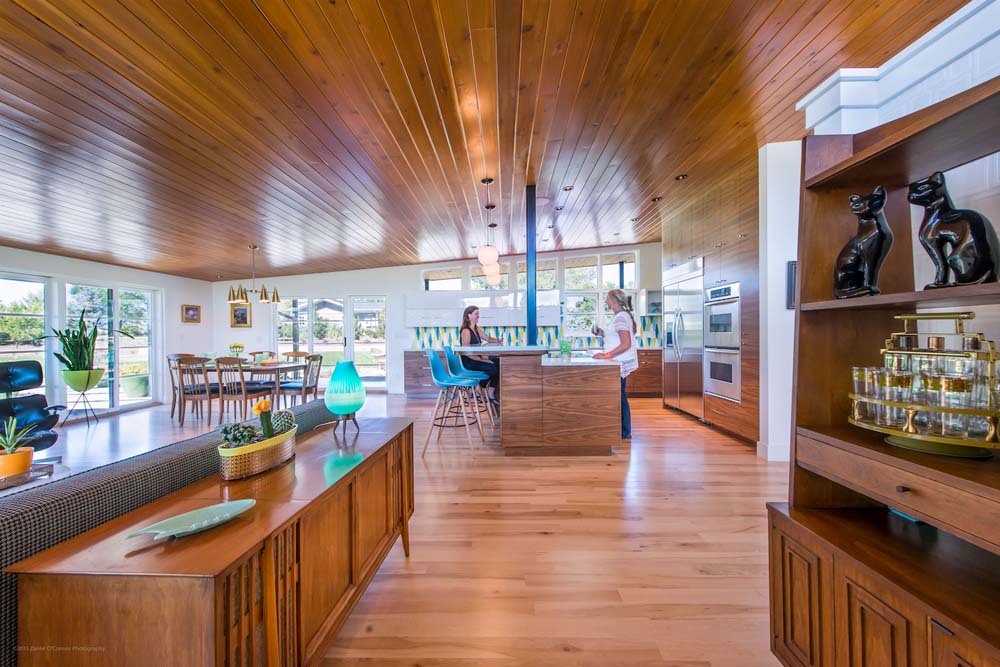 THERE WERE HOLES IN THE FLOOR, BUT THAT WASN’T NEARLY THE WORST OF IT. CABINETS WERE TORN AWAY, AND MUCH OF THE HOUSE WAS DOWN TO THE STUDS. IT NEEDED ALL NEW ELECTRICAL. NEW PLUMBING. NEW HEATER. NEW AIR CONDITIONER. THE FORMER OWNER PULLED DOWN WALLS AND ROOF BEAMS, WHICH EXPOSED—TO THE HORROR OF ALL INVOLVED— A SAGGING JOIST SPANNING 25 FEET OR MORE, HELD UP AT EITHER END BY TWO-BY-EIGHT BOARDS, WHICH MIGHT PLAUSIBLY HAVE DATED TO THE EISENHOWER ADMINISTRATION. THE KITCHEN BOASTED NEW WINDOWS, BUT THEY WEREN’T TO CODE AND WOULD HAVE TO COME OUT, AS WELL. 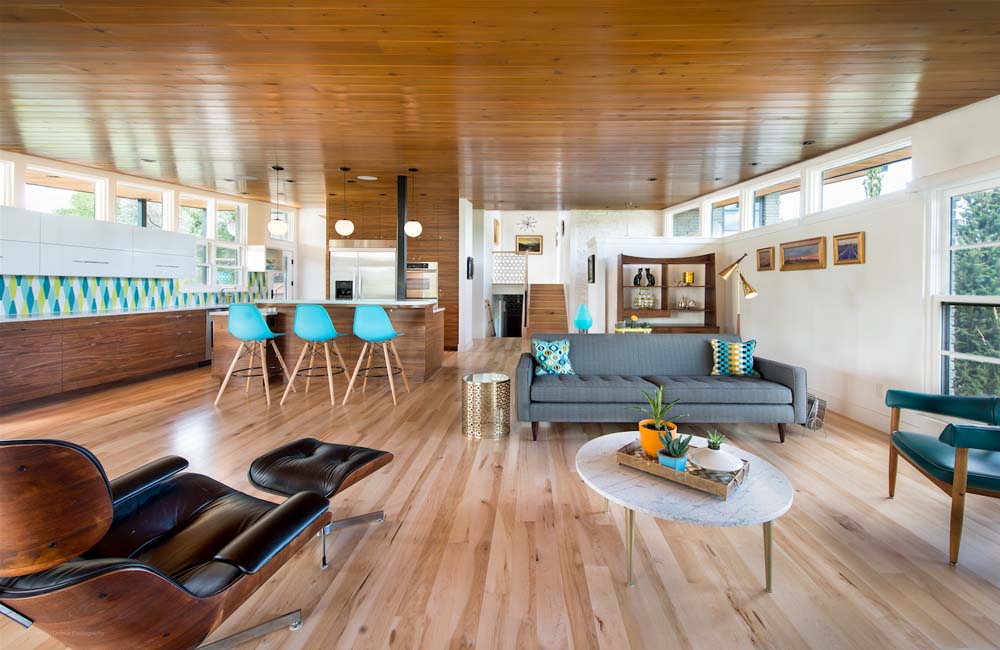 Angie and Scot Graham must have known they didn’t have to do this. They didn’t have to sell their immaculate Bonnie Brae Tudor and everything in it to take on a yearlong renovation project. They didn’t have to buy a dilapidated 1956 beauty their realtor found on Craigslist. (It wasn’t even listed in the MLS). They didn’t have to pack up their children and move across town to start over. “It was overwhelming,” said Angie, “but we knew we wanted to be in this neighborhood, and we felt like we were getting a good deal.”

Indeed, the west Denver suburb of Bow Mar has long been a residential hotbed. Sporting a delicious array of well-crafted upscale homes and anchored by a recreation-friendly lake, Bow Mar’s supply of affordable real estate is minimal, because people who move in tend to stick around. Unless, of course, an enterprising couple is ready to pounce when a Craigslist fixer-upper slips through the cracks. 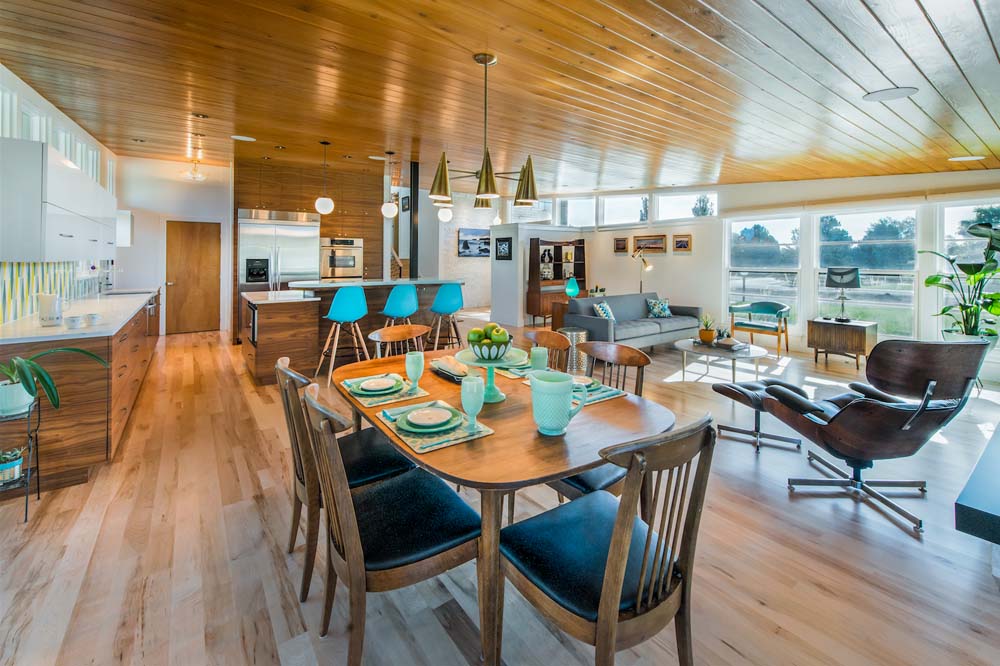 Location aside, the Grahams each brought their own motivation to the project. Tirelessly optimistic, Angie is a creative force of nature. The former labor and delivery nurse now oversees her five design-related businesses, from wallpaper consulting to greeting cards to upcycled furs. Her passion for all things midcentury modern was the catalyst for this risky endeavor, as well as the perpetual motion machine that sustained it. Scot, whose tastes once skewed more traditional—hence the Bonnie Brae Tudor—recognized within himself a growing nostalgia for the California mid-mod in which he’d been raised. He appreciated the aesthetic, and he saw within it a functional layout that lent itself to raising three boys, all less than 10 years old. 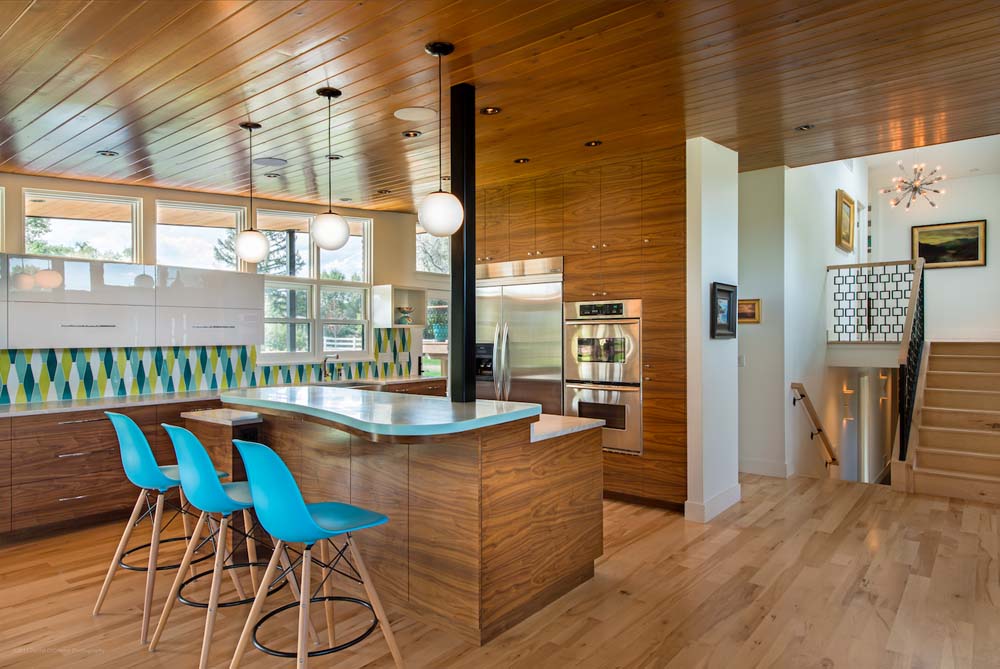 IN THE KITCHEN
Steve Barsch was the architect who, more than a decade prior, led a full renovation of the Grahams’ previous home. Now he was assigned a very different task, and he saw challenges— and opportunities—everywhere. “There were vinyl windows across the kitchen in new openings, and that was terrible, because they had really thick three-inch vinyl wraps and about 12 inches of framing between each one,” he said. “So all of that got torn out so we could really open up those walls and add the high windows.”

Enter all-new custom cabinetry, some white and some walnut. The backsplash is aqua and chartreuse, and in this small space, the boldness is a stark complement to the crisp cabinets and abundant natural light. New countertops are granite here, Corian there. Wood ceilings and floors support, respectively, pendant lights and shell chairs. The appliances, remarkably, were salvaged from the home’s former life and blend perfectly with the new environment. 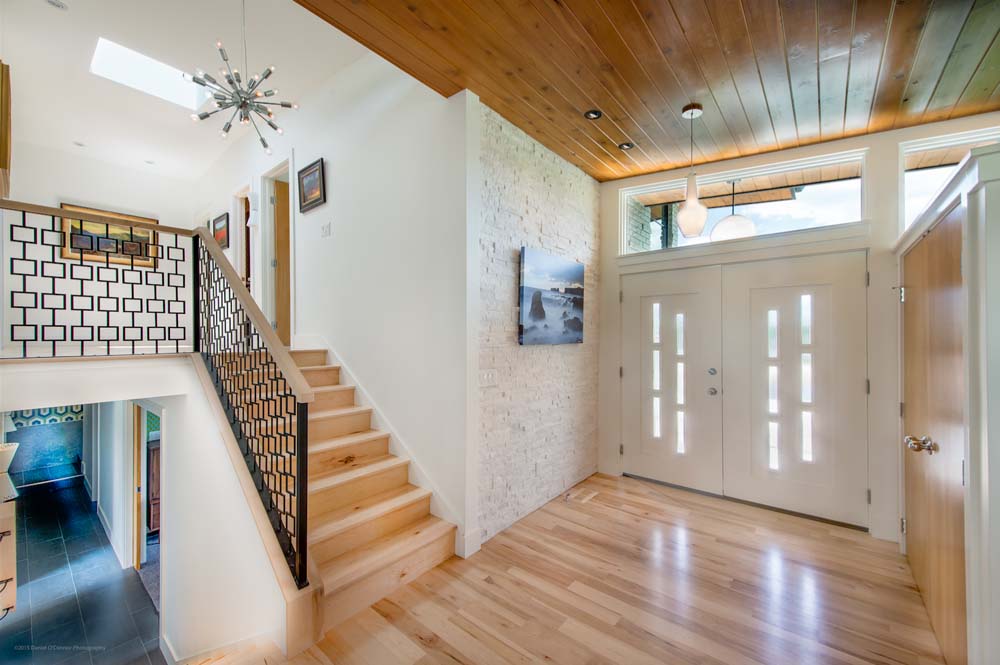 UP THE STAIRS
Where there once was a master suite and a guest bedroom, there are now three smaller rooms and two bathrooms, all reconfigured. (Remember: three boys.) Around the corner is an office that opens to a rear redwood deck. Custom shelving runs all the way to the ceiling, much like the kitchen cabinets. This is not a coincidence. Angie Graham might like an open floorplan, but she won’t tolerate wasted space. The walnut desks, like so much in this space, she designed herself. 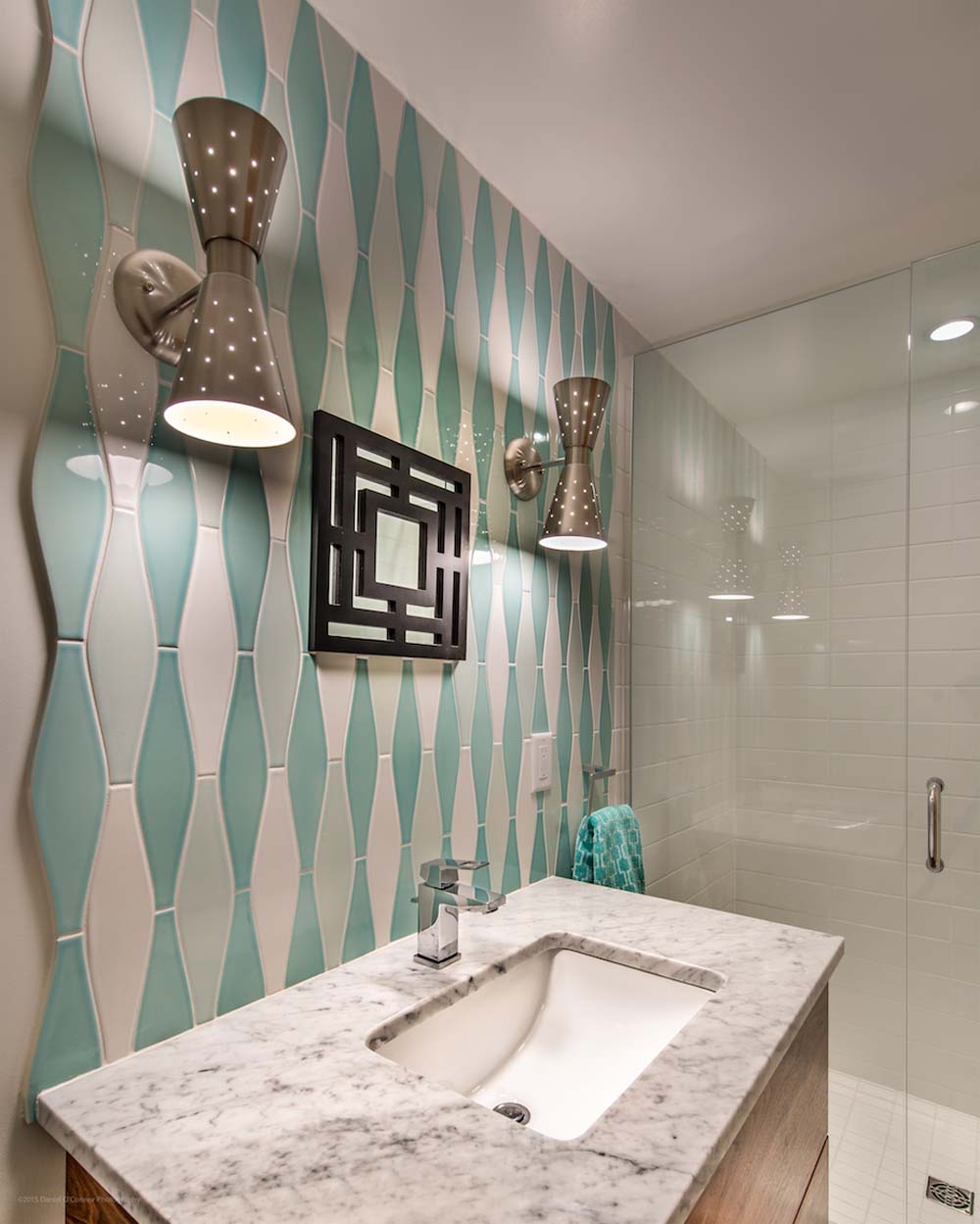 The house once ended here, with an awkward mother-in-law suite tucked around back, accessible only at ground level through a separate entrance. It sunk four inches into the ground. As Barsch said, “It was a really weird addition. They had slab-on-grade floor that had heat ducts in the dirt underneath the slab, which was terrifying but really old school. Then someone tried to add a bathroom in the back that was really trashed, and a water heater got installed after the fact, in front of the toilet.” Further complicating matters was the rear patio, which was elevated four feet above the actual room. 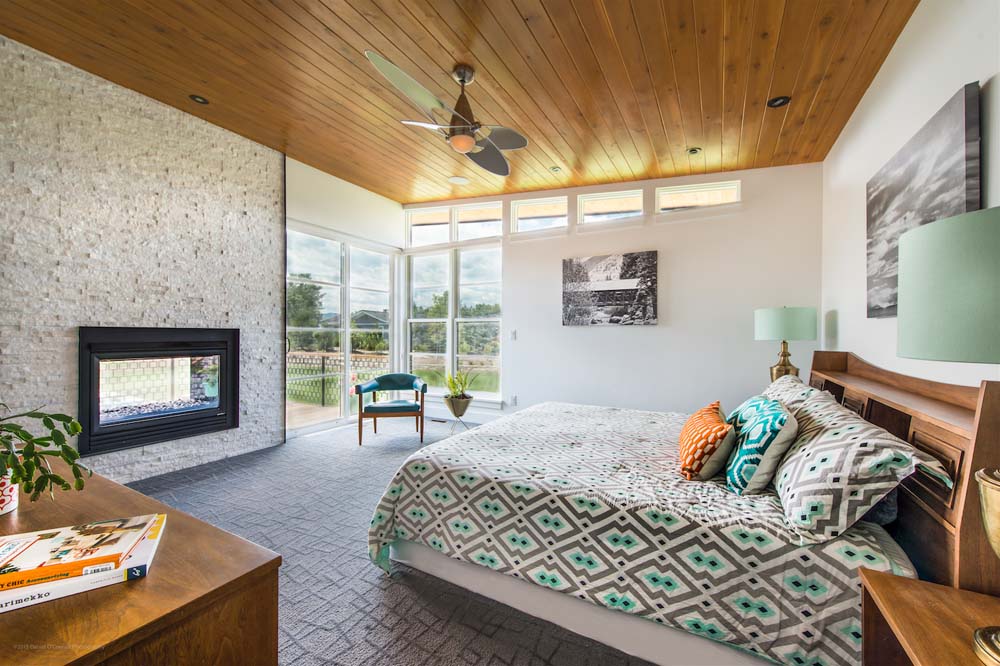 But the space wasn’t a lost cause. There was still original brick that managed a wainscot for a half wall on the exterior, and in it, Barsch saw a singular element to tie into the rest of the house. Ultimately, they saved that brick wall but tore down the rest of the awkward addition it bordered, constructing in its place an all-new master suite—open to the office and the kids’ rooms down the hall, and raised high enough off the ground so the spectacular mountain views were no longer obstructed by the deck. An indoor/outdoor fireplace was added along with gray shag carpet to draw the eye with its ambitious use of squares. (The theme of squares abounds throughout the house. Angie calls it an affectionate nod to Jonathan Adler, and the choice provides both cohesion and period authenticity.)

IN THE BACKYARD
“The grass was a complete disaster,” said Angie. “And there were no salvageable trees.” They began by adding a retaining wall along the far perimeter to lend some definition, and to give the yard a symmetrical, mid-century feel. A fire pit kisses up against checkerboard planters, and Scot Graham apportioned each planter with their own distinct botanic colors. 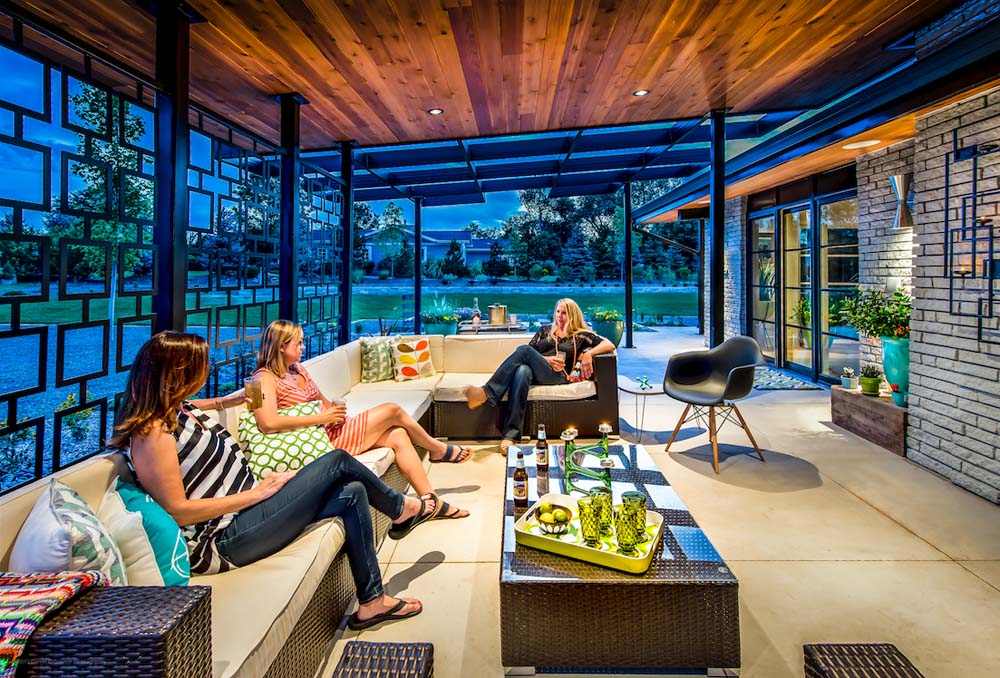 Alongside the house is a pergola, framed predictably and pleasurably in black metal squares. The roof extends another 10 feet to provide cover for the comfy furniture and modest bar. Tall grasses allow privacy without closing off entirely from the front yard. The flow from inside to outside is seamless. 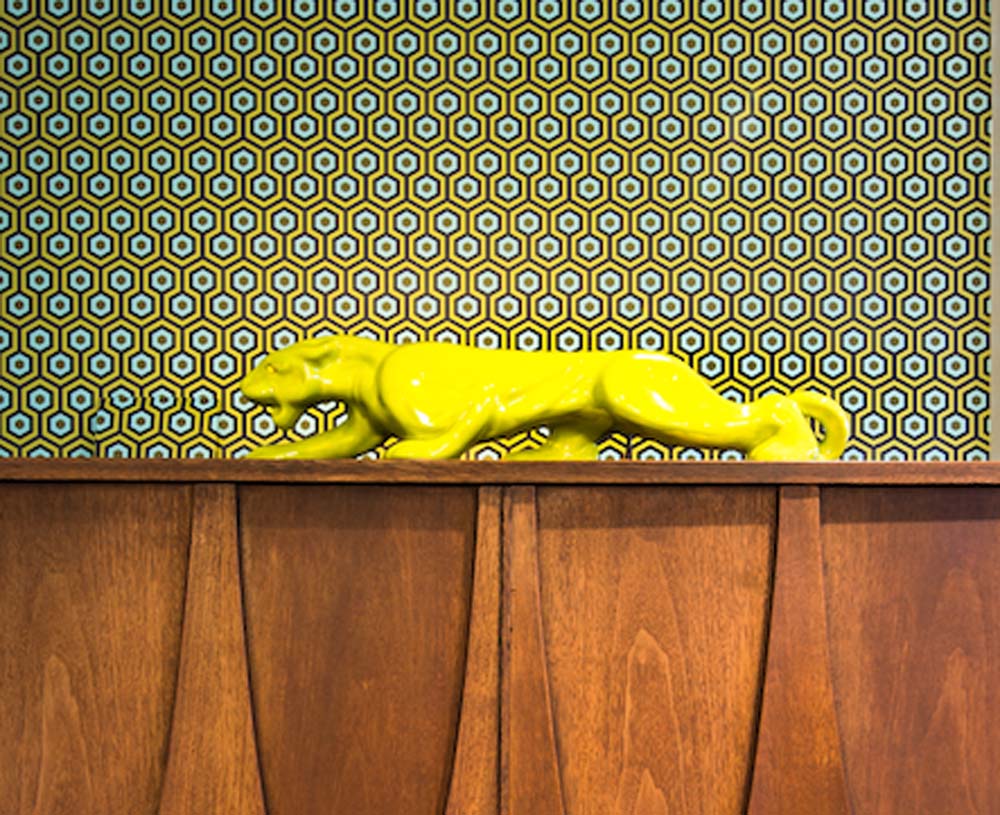 FILLING IT OUT
Lovely as their old furniture was, it didn’t align with a mid-century modern home. So they sold it—all of it—and Angie spent a full year scouring every conceivable outlet for furniture, lighting, and accessories. She made exhaustive use of eBay, Craigslist, Amazon, Etsy, estate sales, Room & Board, and at least one thrift shop whose name she guards as sacrosanct. She also engaged the services of several furniture “pickers,” though none more than Mike McKeen, a kindred spirit better known around Denver as Mid-century Mike.

McKeen helped Angie locate and acquire several of her favorite pieces, including the Broyhill Sculptra set that adorns the master bedroom. Broyhill is a theme every bit as prevalent here as Adler’s squares, and perhaps more so. All told, the Grahams amassed a collection of 34 individual Broyhill pieces, many from the iconic Brasilia line and all acquired within the course of the home’s renovation. The result is two-fold: It builds a certain tasteful continuity throughout, while balancing the countless upcycled items dotting every room. From chairs to light fixtures, every piece has the integrity of compatibility on its side. Broyhill notwithstanding, it can be difficult to determine which furnishings are truly vintage and which are simply repurposed from something else. They all fit. 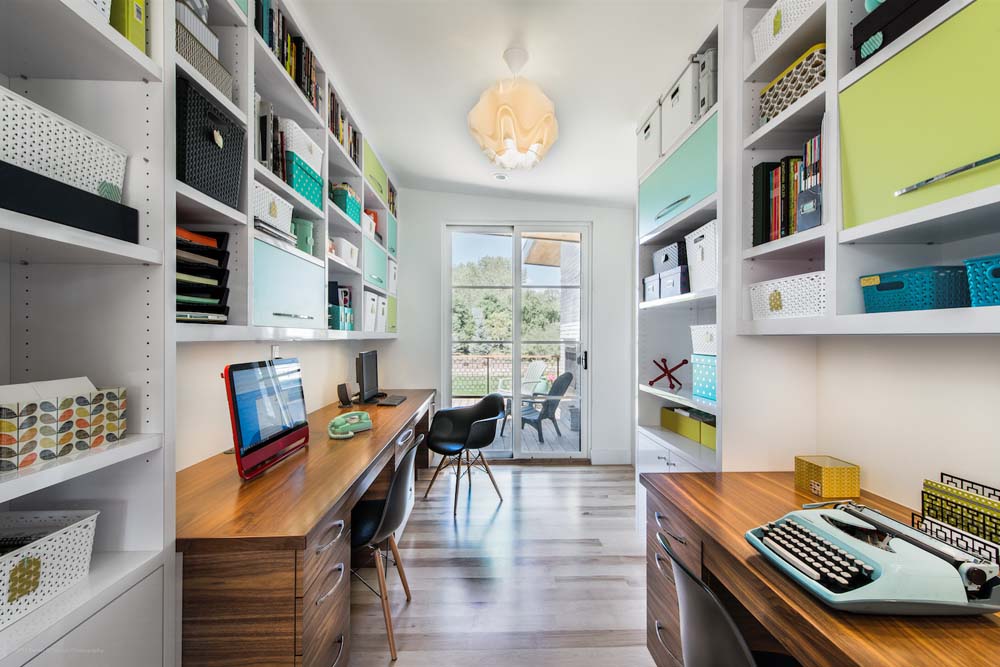 Considering their progress, the Grahams cut a strikingly nonchalant figure on how far they’ve come in the past year. Surely they know that they didn’t have to do any of this. Still, it’s difficult to soak up the mountain views from their newly finished master bedroom and not feel like this was all, somehow, part of the plan. 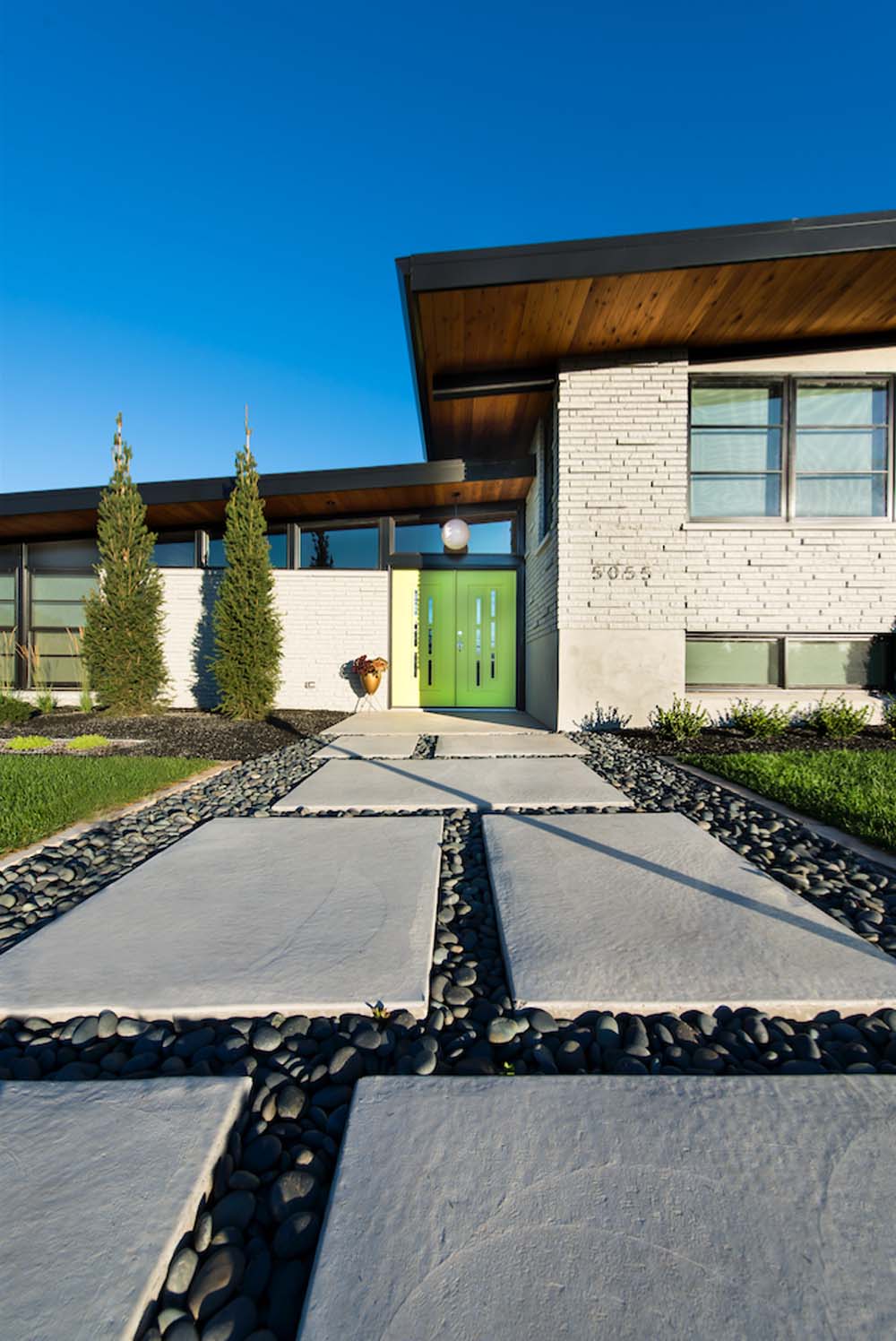 Want a tour of this cover-story home? We’re inviting 20 Modern In Denver readers to visit! Visit our event page to RSVP.