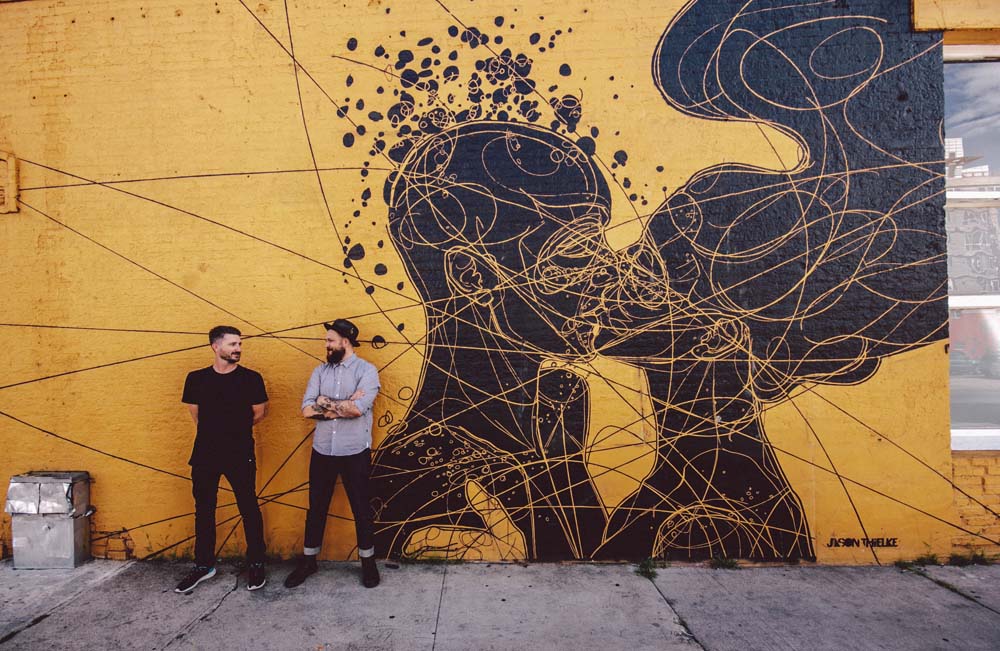 DEFYING CONVENTION AND DESIGNING REINVENTION ARE EXACTLY WHY DENVER-BASED CONSUME & CREATE SUCCEED AS A CLIENT-CENTERED DESIGN FIRM. FROM SKATE CULTURE TO GLOBAL BRANDS AND BACK TO THEIR COMMUNITY, TAKING A RISK MEANS THE POTENTIAL TO STUMBLE ONTO SOMETHING NEW, SOMETHING FRESH. IT’S IN THEIR DNA. AND IT’S WHY THESE LOCAL INFLUENCERS (RE)DEFINE WHAT FRESHNESS CAN BE. 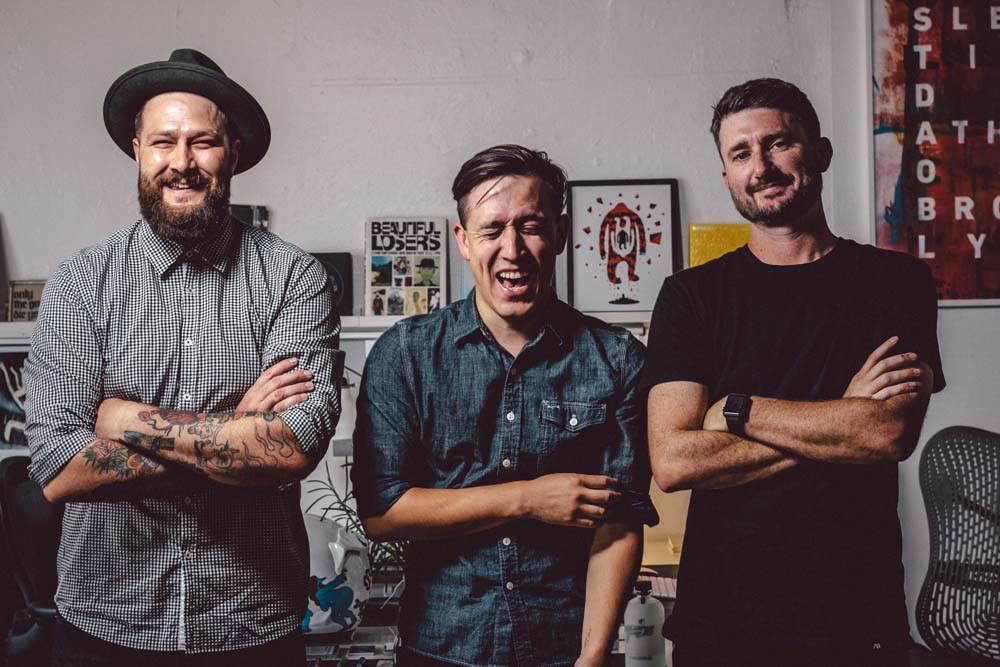 AT THE INTERSECTION OF BROADWAY, ARAPAHOE, AND PARK AVE WEST, YOU’LL FIND THE SMARTLY SPARTAN CORNER SPACE HOME TO CONSUME & CREATE, THE DENVER-BASED DESIGN STUDIO RUN BY CREATIVE DIRECTORS AND PARTNERS JOSHUA WILLS AND STEVE HURD. SINCE SPRING, THE DUO HAS MADE AN IMPACT BEING A BESPOKE BUSINESS GO-TO FOR ALL THINGS CREATIVE. A STREET ART MURAL (JASON THIELKE’S “KIM AND JESSE”) ADORNS THE STRUCTURE’S EAST-FACING EXTERIOR; FITTINGLY, THE EMBRACE OF THE PAINTED COUPLE MIRRORS THE FIRM’S CLEAN, COMMUNICATIVE DESIGN PRINCIPLES MARRIED TO THE EDGE AND IMPROVISATION OF KICKFLIPS AND KRYLON. 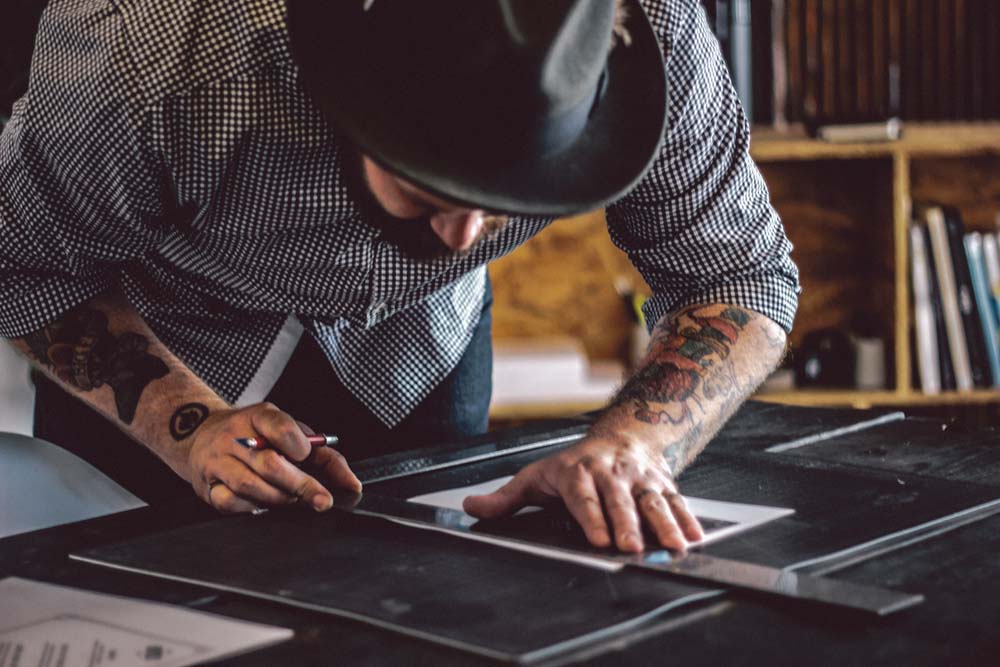 But what’s in a name? For Consume & Create, it’s an intentional play of nature versus nurture, and of work being a product of a collaborative process between client and designer. In lieu of having a signature aesthetic, the company constructs its design scaffolding to the business needs of each client. “This means meeting with each individual to see if we can align with what they’d like to accomplish,” said Wills. “We see ourselves as our clients’ creative departments, to find design that is inspired by them.” For Denver-based Black Eye Coffee, that meant a balancing act of retaining identity while growing as a brand. “Our loyal customers have become familiar with our original branding and have formed an attachment to it,” said Co-Founder Ali Elman. “Joshua and Steve were able to move Black Eye from its original branding to something more sophisticated and fitting to what we are evolving into. Our new look is still ‘us’ and tells our story, but in a different way—the impact of this is huge.” The key differentiator, she noted, is in the honest (and fun) work they provide: “We can just have a conversation about our brands and our dreams, and they can turn around and tell the story so accurately. It is a rare find.” 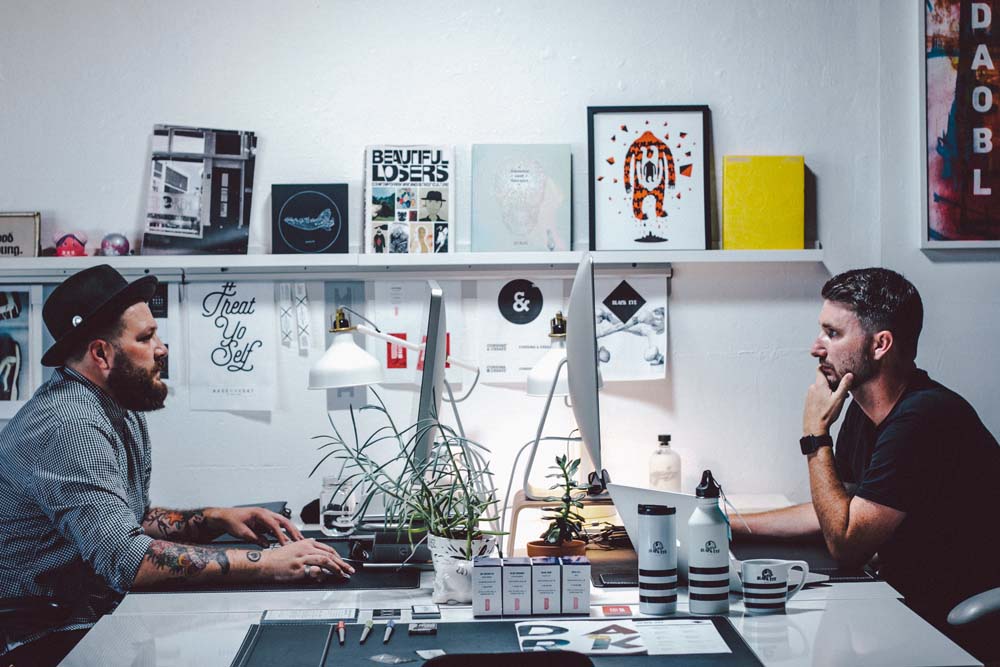 Formerly with Factory Design Labs, Wills and Hurd are no strangers to the eclectic storytelling aesthetic. Their collective campaign resumes working with agencies read as a litany of international lifestyle luminaries: Oakley, for the 2012 London Olympics. The North Face. Calloway. Sports Authority. From sports teams in Switzerland to Shanghai, the work’s global span was a pinnacle of reach. So why would these two established creatives leave the Factory to risk it all on a new venture? Why take a leap into the unknown? 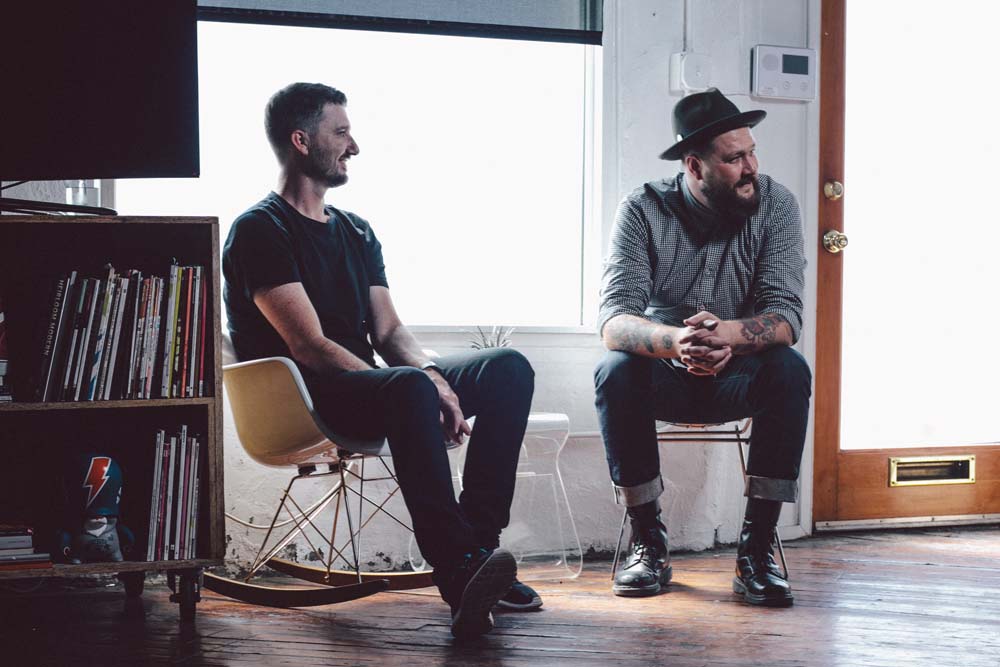 Working on a multinational brand can often bring a substantial distance between the execution and creative direction, but coincidentally, it was an international influence that inspired the comprehensive problem-solving nature of Consume & Create. “In America, design is often seen as a singular pursuit—meaning we’re expected to specialize in one area, which is limiting as a creative,” said Wills. “Outside of the States, in Europe and Asia, it’s a lot more holistic. Designers are seen as creative problem solvers who bounce between mediums, working on branding or identity projects one day, designing physical spaces the next, and then jumping into digital projects all within the span of a week.” Going local afforded the opportunity to tap into the influx of vibrant vanguards flooding into Denver’s creative set. 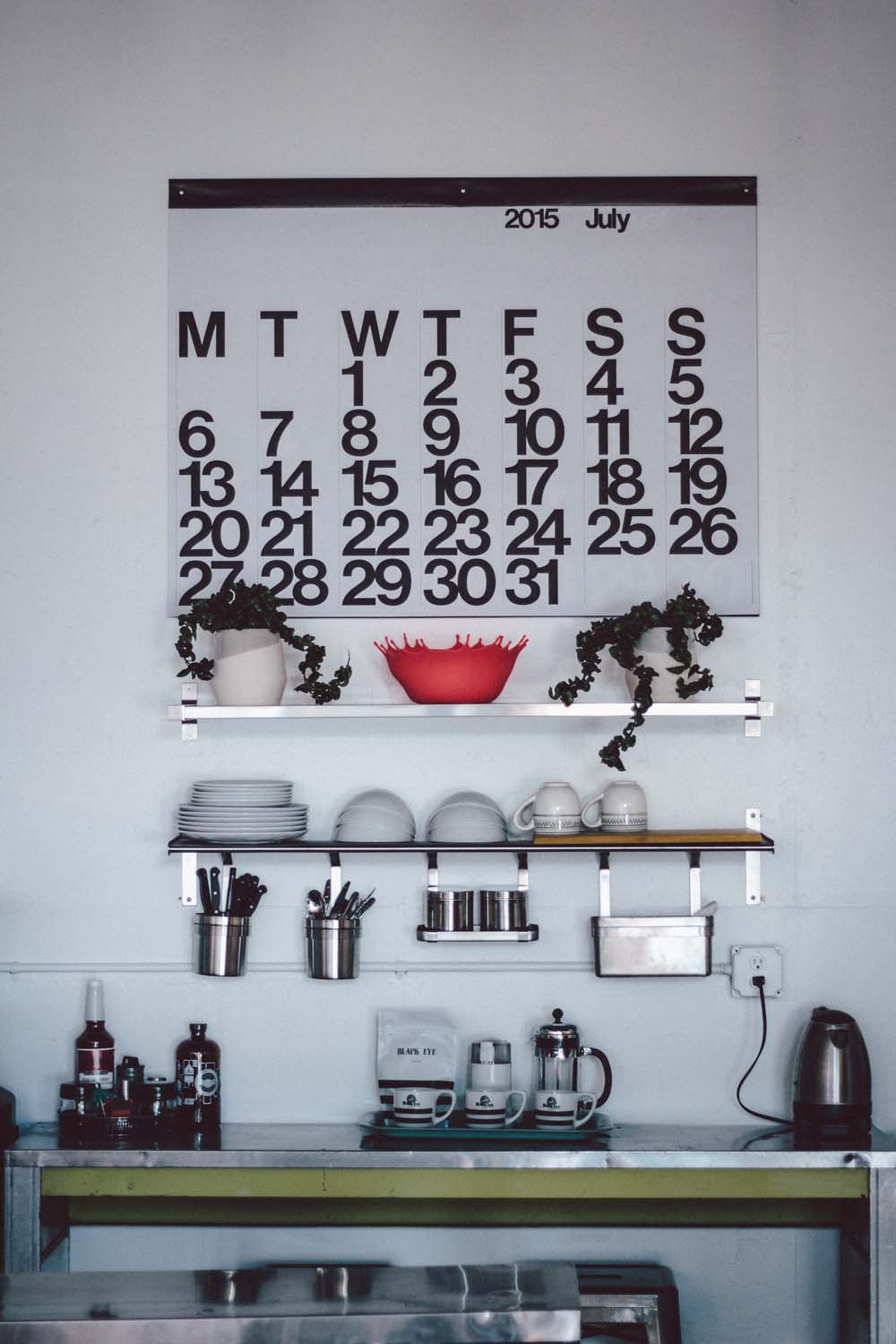 But at the turn of the 21st century, this wasn’t always the case. The early aughts saw a flight of creatives move from Colorado to artistic hubs on the coasts—and with the right-brain drain came opportunities for Denver’s homegrown, according to Wills. “Being Colorado natives, we dug our heels in,” he said. “We opened businesses to empower the local community and to showcase the talent we have right here.” Included in this community is Proper Barbershop, a throwback classic grooming establishment searching for the right branding to match their tonsorial tactics. As founder Jordan Weinstein said, the comprehensive presence and respect Consume & Create commands moved the brand forward on all fronts. “The first 50 people in our chair were Denver designers,” he said. “Once C&C gets behind a project, they wear it with pride. I consider it a gift, privilege, and honor to work with them.” With Weinstein’s launch of the Proper Product Company sundry line this fall, the ongoing aesthetic touch of Consume & Create on everything is testament to continued collaborative fruition. “I’ll only ever work with them,” he said.

Commitment to community through entrepreneurship runs deep for Wills. Just one example is his unorthodox enterprise The Shoppe—a cupcake and cereal bar on Colfax he opened with his wife—which offered the breakfast staple, cupcakes, and board games, and it doubled as a place to showcase up-and-coming artists. The sweet fixture featured more than just panache and ganache, however. As he explained, it was a place to congregate for a community that lacked a late-night alternative to inebriation. Another endeavor for Joshua and his wife, Tran, was the establishment of SVPER ORDINARY. Founded as a pop-up gallery in River North in 2010, it featured rotating contemporary artists. Built for maximum mobility, the venue was part vestibule, part vert ramp. With walls on wheels, it quickly converted into an open living (and skateboarding) space. The couple was later approached by The Source, the RiNo-based commercial collective, to evolve SVPER ORDINARY into a hip hybrid design retail/gallery space. And Base Coat Nail Salon, Tran’s most recent undertaking (which also got a bit of branding help from Consume & Create), is poised to open an LA-based branch.

Business acumen beyond the brand has become a calling card for Consume & Create and a source of inspiration. Small business owners have vision and passion built-in, necessitating the mastering of wearing multiple hats. It’s no surprise, then, that this C&C creative factory fashions itself as haberdashers who work hand-in-hand, from soup to nuts. “Clients have a lot riding on the work,” said Hurd. “They’ve got skin in the game. That’s what ultimately makes this so rewarding.” And as Wills described, they bring elements of success at the international level back down to the hyper-local. 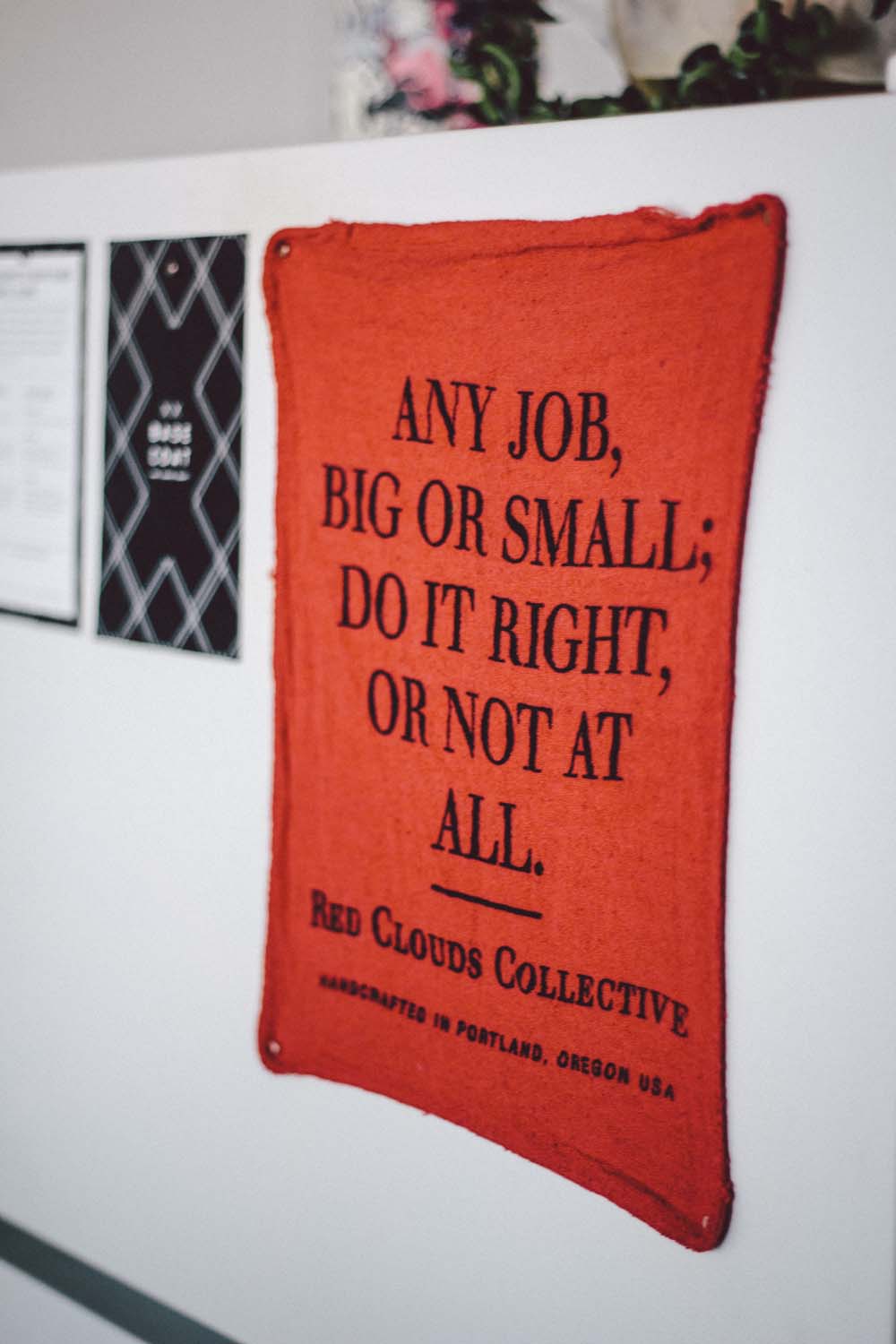 It’s this sense of reverse scale that makes Consume & Create unique, of seeing what works globally and transposing it within its own neighborhoods, constructing it with neighbors. They are, by their own admission, makers. “Making is helping others succeed,” said Hurd. “That means your friends, your clients, and community.”

This ever-prevalent organic commitment localizes their ethos of viewing everything in life as an object of design, and curated as such. For Consume & Create, innovative concepts have led to success through unorthodox approaches. So, where do they go from here? For Wills, the answer is found in the process: “Show up every day, work your ass off, and great things will happen.” Here we go, yo.