WHEN WORKPLACE RESOURCE OUTGREW ITS LONGTIME LODO FOOTPRINT, IT OPTED FOR TWO NEW FACILITIES WITH ENTIRELY DISTINCT PURPOSES. BUT JUST HOW EASY IS IT TO DESIGN THE PERFECT OFFICE ENVIRONMENT FOR A COMPANY WITH AN ENDLESS RESERVOIR OF THE WORLD’S BEST OFFICE FURNITURE? 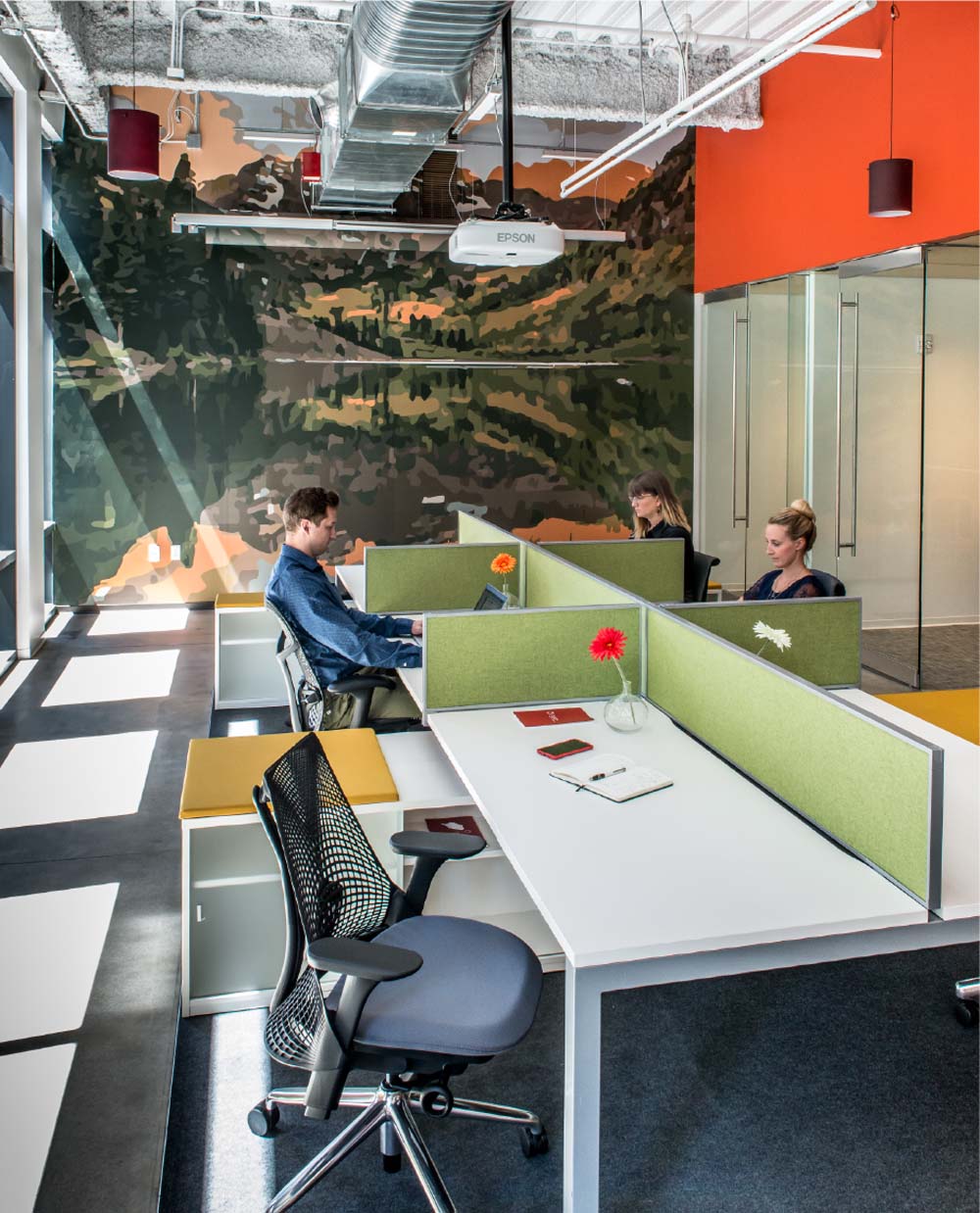 WORDS: CHARLIE KEATON • IMAGES: DANIEL O ’ CONNOR
Tucked away on the ground floor of a LoDo highrise sits a design studio waiting for its closeup. Just steps from the entry is a parlor with wood floors and a fireplace framed by meticulously chosen glazed tile, and copious bookshelves. Around the corner is a state-of-the-art presentation space with stadium-bench seating. There is an open kitchen, a scenic Colorado mural, cutting edge audio/visual setup, and co-working desk space flanked by some of the world’s most recognizable chairs. The studio is brand new, and most of the neighbors haven’t seen it yet. But they will.
Eight miles due east, at the western edge of a developing office park in the unassuming Stapleton borough known as Central Park, there sits an expansive new 11,000-square-foot showroom. Attached to that showroom is a 31,000-square-foot warehouse, and, as if that weren’t enough, the entire space doubles as its own corporate headquarters. The floorplan is disarmingly open. Employees from several departments grab whatever desk suits them on any given day. A meeting space just off the front entry is walled entirely in glass. 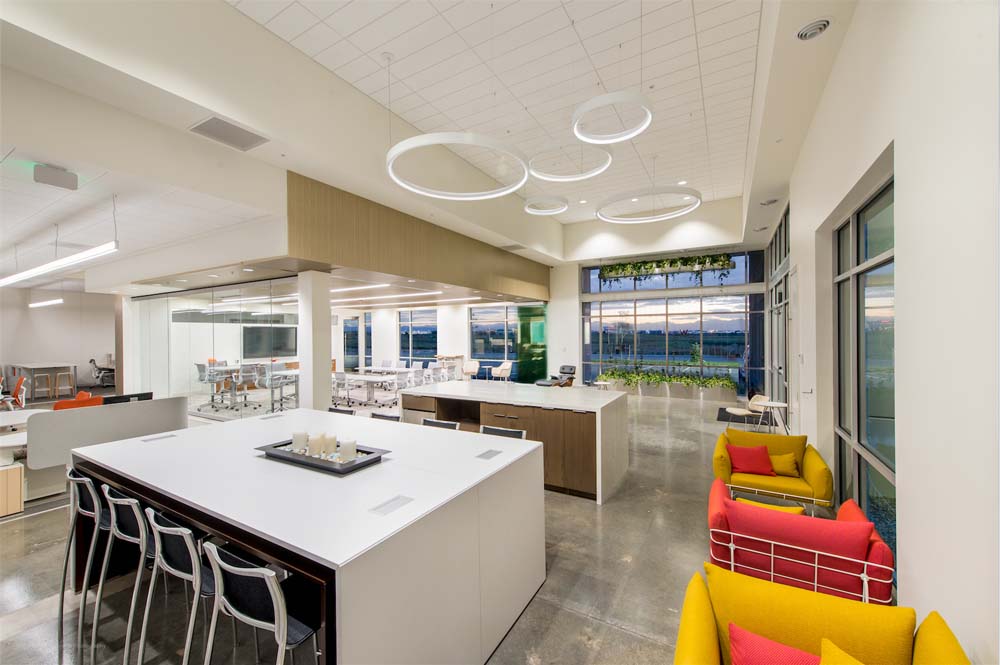 Different though they may be, these spaces share a common lineage. Both have been designed to meet the exacting demands of Workplace Resource—and, more to the point, the thousands of clients who come here for guidance on decisions ranging from furniture selection to office redesigns. Formerly a Herman Miller-owned dealership, Workplace Resource also represents hundreds of furniture lines while remaining one of the largest independently owned Herman Miller dealers in the country. That delicate balance is what allows its business to thrive, and it’s also what led it to outgrow its former, smaller downtown footprint. 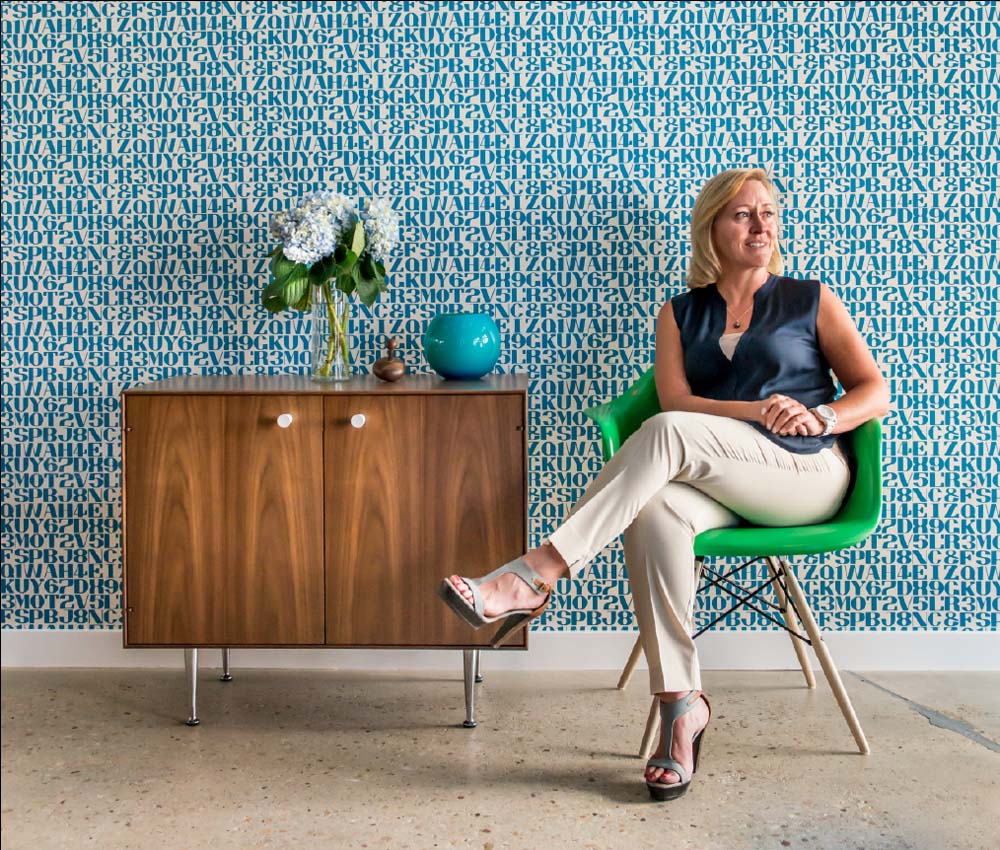 President and CEO Carla Dore knew she needed more space, and she was particularly keen on bringing her office staff and warehouse operations under one roof. A tight downtown real estate market, however, offered little in the way of obvious solutions. Undeterred, Dore struck upon a novel idea: What if Workplace Resource moved its showroom, warehouse, and office staff to Stapleton, which would streamline operations and allow easy access for clients … while simultaneously developing a more intimate studio in the heart of LoDo, where designers and clients can meet or participate in community events? “When you want to see what Workplace Resource does and what we represent, you can see everything from products to how we take care of your space at Central Park,” said Dore. “The downtown studio is really technology-rich, and it does exactly what our customers are asking us to do, which is to leverage their real estate for a much better purpose. So it’s a smaller space, but it’s an opportunity to bring in the community and really try to use that space differently, because that’s what we hear our customers, the design firms, and the brokers say that they need downtown.” 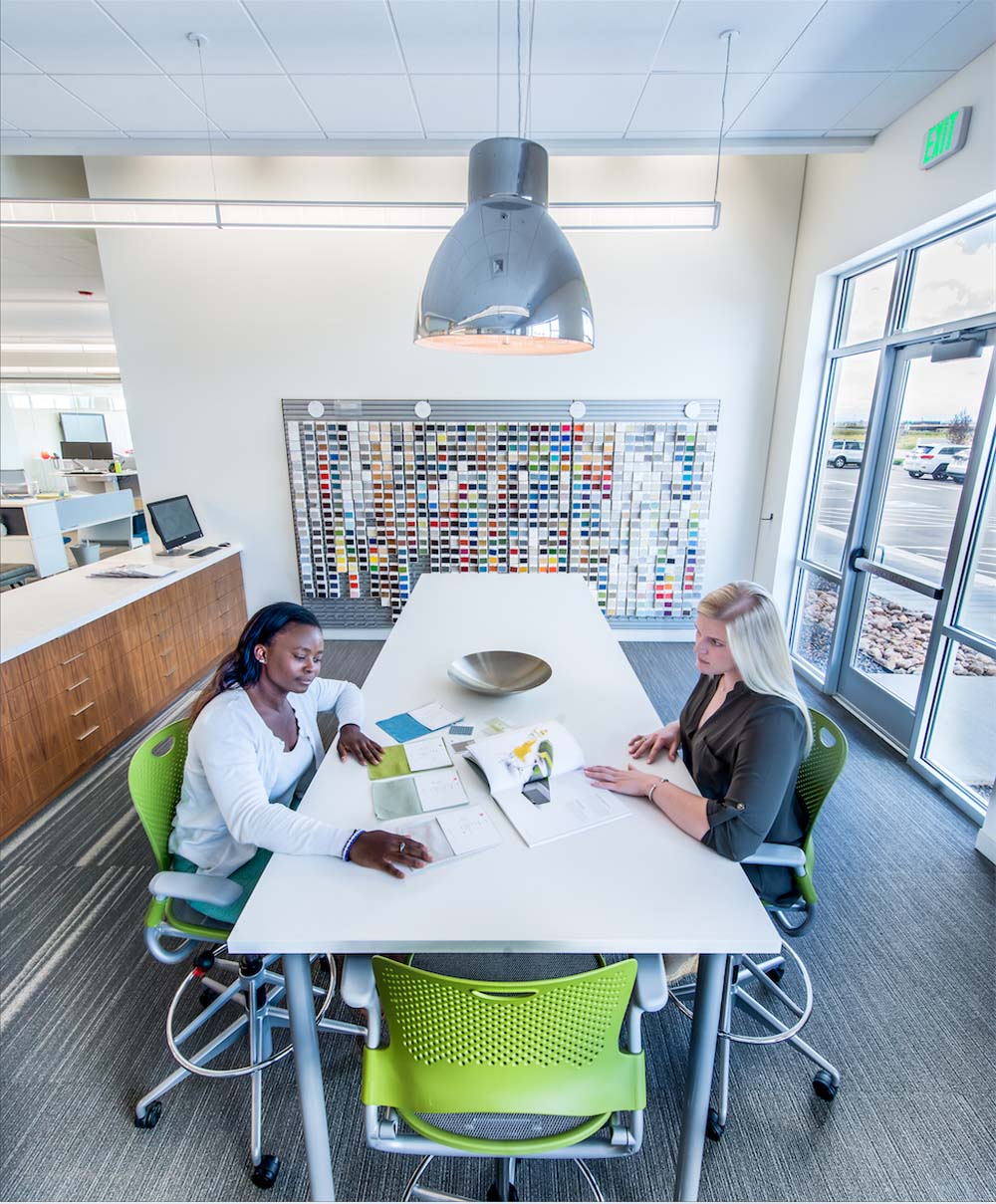 In order to make this bifurcated vision a reality, Dore worked with in-house Designer Michelle Evans to assemble a diverse team of industry professionals. For the Central Park facility they enlisted Elsy Studios, best known for their work at the 460,000-square-foot CH2M Hill headquarters, in Englewood. For the downtown studio, the choice was BURKETTDESIGN, a firm whose client list includes Comcast and the Denver Metro Chamber of Commerce. And lending expertise to both projects—though decidedly more attuned to the downtown space—was Jason Hall, the Owner and Creative Director of Chicago-based Charlie Greene Studio, who has a long history of collaborating on Herman Miller spaces.
For all involved, the project’s greatest asset was also an intriguing challenge: how to creatively deploy office furniture in the service of a company that has limitless access to some of the most beloved and storied furniture in history. After all, Herman Miller counts among its designers the most revered names in the business, from Charles and Ray Eames to George Nelson to Alexander Girard, as well as high-profile contemporary designers like Yves Behar and Jasper Morrison. The possibilities are vast enough to border on overwhelming. “It’s hard for a designer to speak with any objectivity about Herman Miller,” said Hall, “because of the massive importance of the brand for the last 50 years. They’re consistently staying ahead of what the expectation is going to be, and that comes from amazing creative direction by executive leadership. These things don’t just happen.” 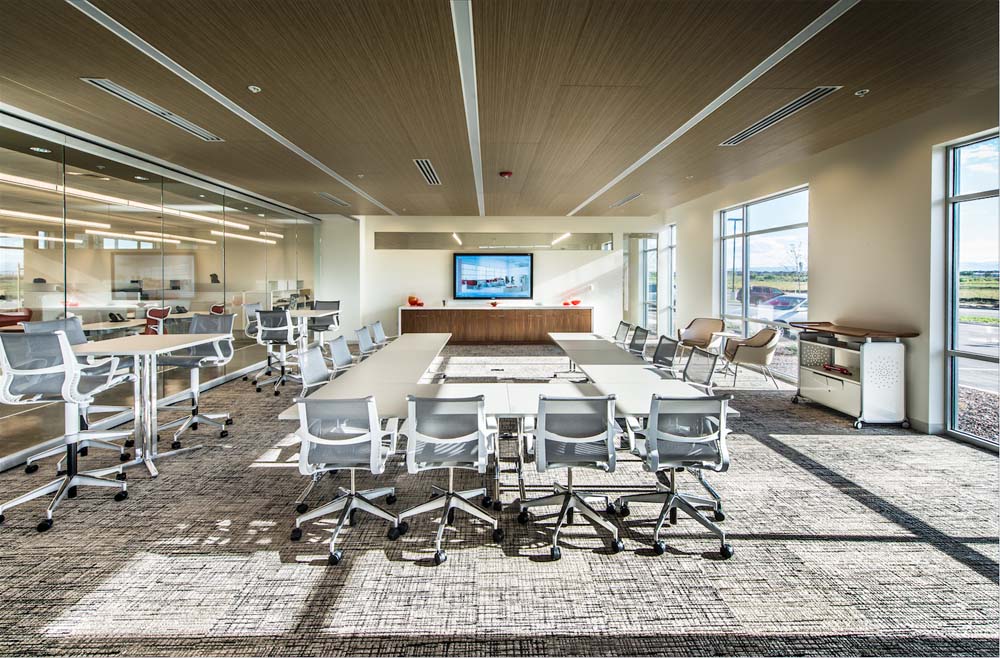 In the LoDo space, that iconic Miller aesthetic is on full display. The studio parlor is a deft blend of home and office, its residential feel a subtle homage to the front parlor which greets visitors at Herman Miller’s Design Yard in Holland, Michigan. The mix of furniture, the fireplace, the wood floors—these choices were all choreographed down to the smallest detail. “We wanted to use pieces that weren’t so iconic or recognizable, or for the ones that are iconic, we wanted to play around with them and make them feel unexpected,” said Hall. “So you’ll see a classic Eames Lounge Chair, but it’s upholstered in this crazy Ralph Lauren blanket fabric. It’s a new way of looking at something you think you know.”

Lynn Coit, President and Founder of Elsy Studios, had her own challenges to contend with as she worked on the Central Park site. The lighting, in particular, was just tricky enough to be fun. As she made crucial design decisions for a cavernous space, she wasn’t always sure where the actual furniture would be—or that it would necessarily remain in that spot forever. “I can’t focus lighting on one area, because it may change over the years. It has to be flexible,” said Coit. One way to address that issue was the liberal utilization of LED lighting. In particular, she deployed a new product called Fluxwerx, which bounces light through a lens “almost like a mini clerestory.” In the kitchen, she installed Nelson Bubble Lamps to help make the space approachable. If that also allows for a nod back to the Herman Miller history that permeates the Workplace Resource culture, all the better.

Dore joined Workplace Resource in the early 1990s, and eventually teamed with Chief Financial Officer Marty Majka to buy the company outright in 2011. She knows as well as anyone the unique place that Herman Miller occupies in the past, present, and future of her industry. But she is quick to point out that her company represents hundreds of other brands, too. “Our goal,” she said, “is to find what’s best for our client. We really believe that Miller is an incredible option. But there are other wonderful lines that we aspire to do more with because it just makes a better space all around. We get more opportunities when an end user understands we can provide broader solutions.”

It is precisely this ability to drill straight into a specific challenge while keeping a close eye on the bigger picture that makes Dore so good at what she does—and so beloved by the peers and employees who speak of her in reverential tones. When she needed new facilities for a growing company, she made a series of shrewd strategic risks. Rather than holding out for a flexible, all-in-one downtown facility that may never come, or moving so far out of town that her customers might not be willing to follow, she opted for an innovative alternative. Just minutes from the site of their former headquarters is a gleaming new Central Park showroom to house both her staff and her warehouse, enabling better workflow and providing clients with an attractive, accessible entry point. To complement that move, she doubled back on a LoDo design studio to facilitate the needs of the local creative community, while also showcasing the best of what Workplace Resource has to offer. “One of the things that I find so interesting is that great brands don’t talk about what they make or what they do,” said Hall. “They talk about what they love.” He was describing Herman Miller. But his insight extends a good deal further than that.