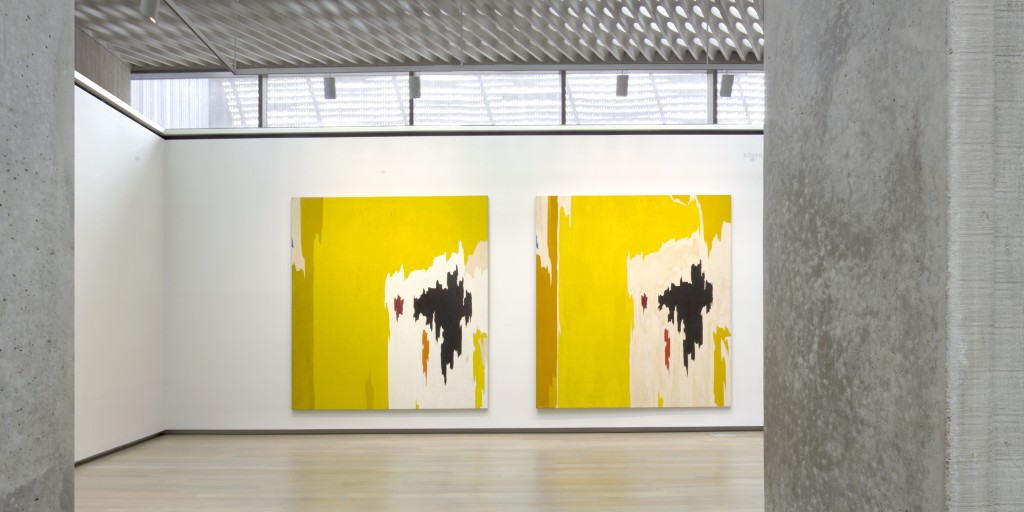 This Friday, September 18, the Clyfford Still Museum will unveil its latest exhibit, “Repeat/Recreate.”

An exhibition of closely related compositions that Still called “replicas,” “Repeat/Recreate” features major works by Clyfford Still exhibited in pairings. Uncanny and often darkly magnetic, they provide a new and greater understanding of Still’s process and methods, while challenging the popular understanding of Abstract Expressionism as an outpouring of impulsive creativity.

The pairings in Repeat/Recreate date from 1925 to 1974. There are more than 70 works in the exhibition, including 43 paintings as well as etchings, lithographs, watercolors, and other works on paper.

Often only small divergences are detectible between Still’s replicas, which range from duos to trios. In other instances, an earlier composition is recast with strikingly novel chromatic choices or on a somewhat changed scale. “Rather than take these ‘doubles’ and ‘triples’ as evidence of an iconoclastic modernist mindset—like, say, a forerunner of Andy Warhol’s proliferating pop culture symbols—it may be more appropriate to locate them in the lineage of Titian or Rembrandt, both of whom made thoughtful copies or variants of the same subject,” said one of the exhibit’s curators, David Anfam. “That among the artistic predecessors whom Still studied were Paul Cézanne and Vincent van Gogh seems notably significant, as each famously worked in series. Still’s serial procedures have a similar kind of recurrent intensity about them.”

The exhibition brings together works of art from some of the world’s most renowned collections, including the Metropolitan Museum of Art, Museum of Modern Art, Detroit Institute of Arts, Hirshhorn Museum and Sculpture Garden, and Smithsonian American Art Museum. At least nineteen works featured in Repeat/Recreate have never been shown publicly, and only one of the exhibition’s pairings has previously been exhibited in tandem.

“The mere existence of these replicas throws much of popular culture’s perception of Abstract Expressionism off balance,” said co-curator and Director of the Clyfford Still Museum Dean Sobel. “This exhibition illustrates how paintings of Still, Pollock, Rothko, and Motherwell were not the outpourings of unbridled and fleeting creative impulses but were, in fact, the result of slow, methodical deliberations that could—and would—be recreated in marvelous variations.”