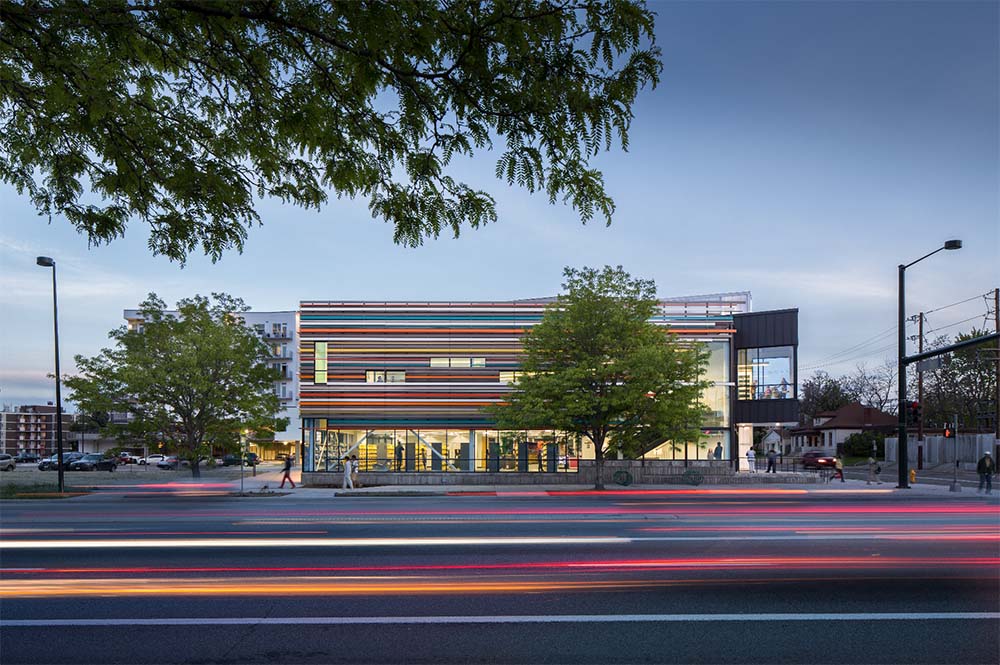 IT’S SATURDAY MORNING, AND 13-YEAR-OLD HANNAH IS EAGER TO CLAIM HER SPACE AT THE NEWLY OPENED RODOLFO “CORKY” GONZALES LIBRARY IN WEST DENVER. CLUTCHING A STUFFED ANIMAL AND A SNACK, HANNAH, WHO VISITS THE LIBRARY DAILY AFTER SCHOOL TO READ OR TO EXPLORE INSTRUMENTS IN THE MUSIC STUDIO, MAKES HER WAY WITH A FRIEND TO THE LIBRARY’S SECOND FLOOR OUTDOOR READING COURTYARD, WHERE SHE FINDS AN EMPTY SPOT ON A SUN-SOAKED BENCH TO SHARE A CONVERSATION AND ENJOY ALL THE LIBRARY’S OFFERINGS, WHICH HAVE CHANGED DRASTICALLY SINCE OUR YOUTH. 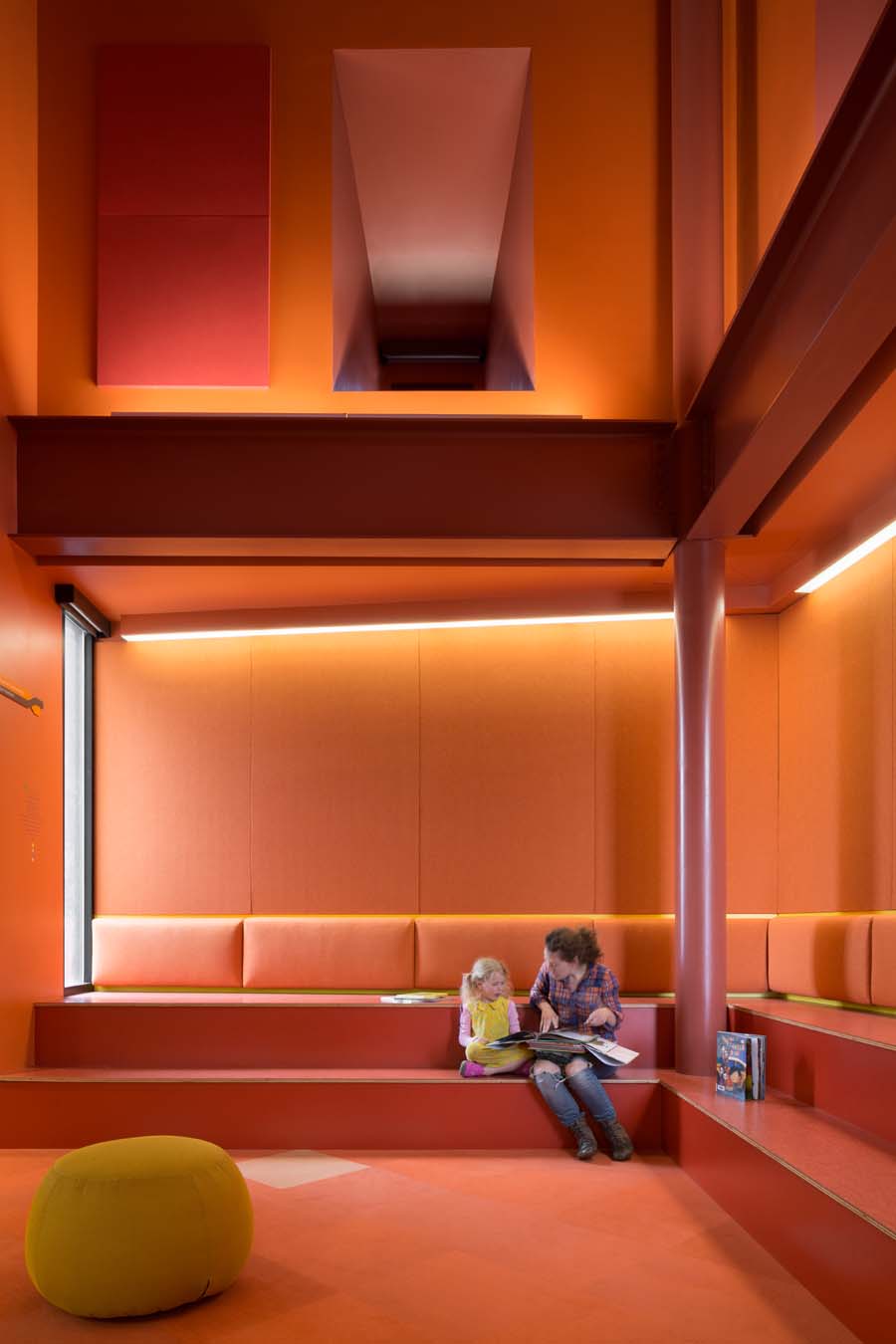 As neighborhood libraries continue to evolve in the digital age, function and feel have been reimagined. Reformulated in shape, size, and offerings so residents can customize their experiences, libraries have taken on such innovative roles as community forum, immigrant resource center, collaborative think tank, coffee shop, and communal living room, all infused with an airy atmosphere and kinetic vibe more akin to an Apple Store than a dowdy reading room. The appeal? Something the Internet can’t provide: direct human interaction. 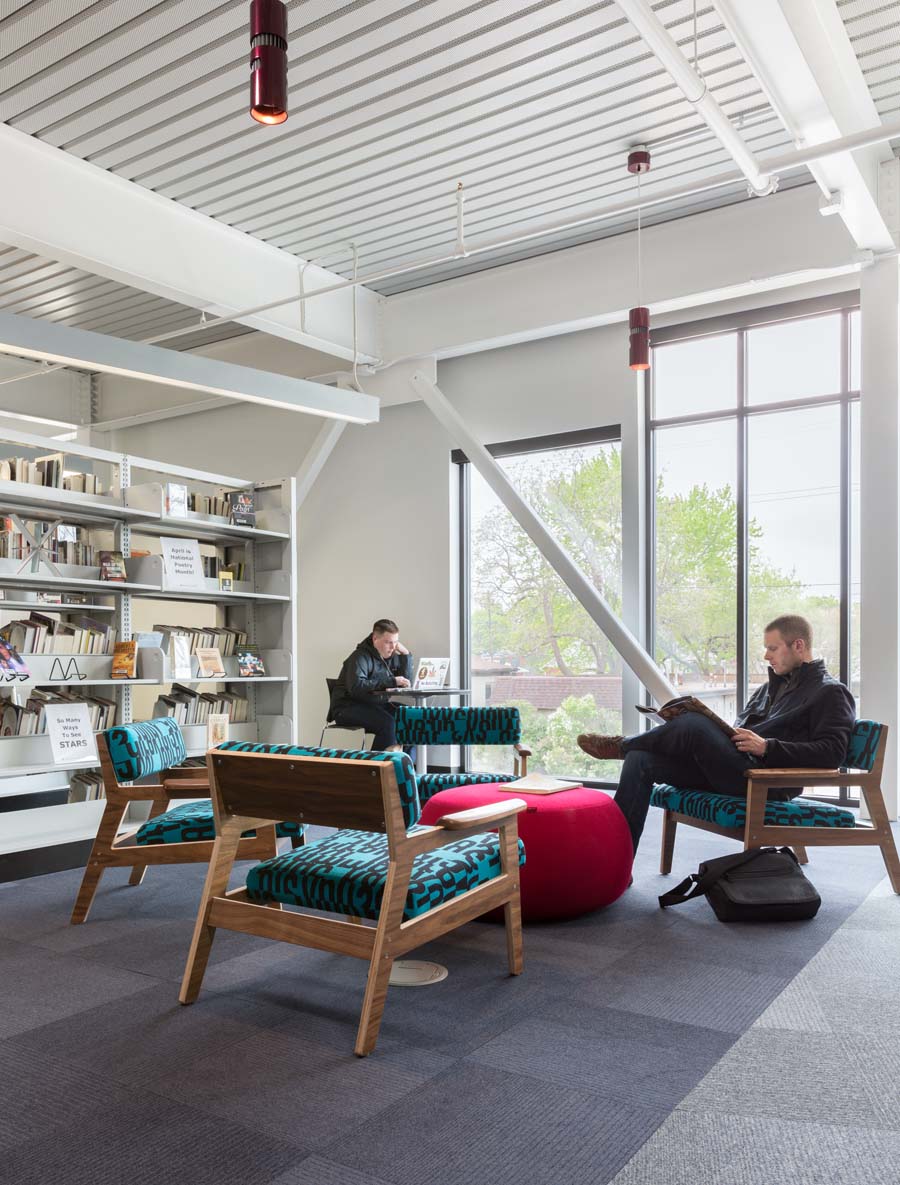 Denver’s new Gonzales Branch Library, bordering heavily trafficked West Colfax, is among Denver Public Library’s (DPL) largest branches at 27,000 square feet. Realized by Five Points-based studiotrope Design Collective, the branch is a prime example of architecture seeking to embody the color of surrounding communities in an effort to establish a vibrant and safe place where everyone feels at home. Yet weaving together a community as culturally, spiritually, and religiously diverse as this, all under one roof, is an ambitious task. “We were basically sponges, listening to what everyone wanted in the building,” said studiotrope Principal Joseph Montalbano of the comprehensive public visioning process that deeply informed his firm’s design for the building. “The ideas we heard challenged us to find ways to reflect the distinctive character of the community while creating a memorable place for all generations.” 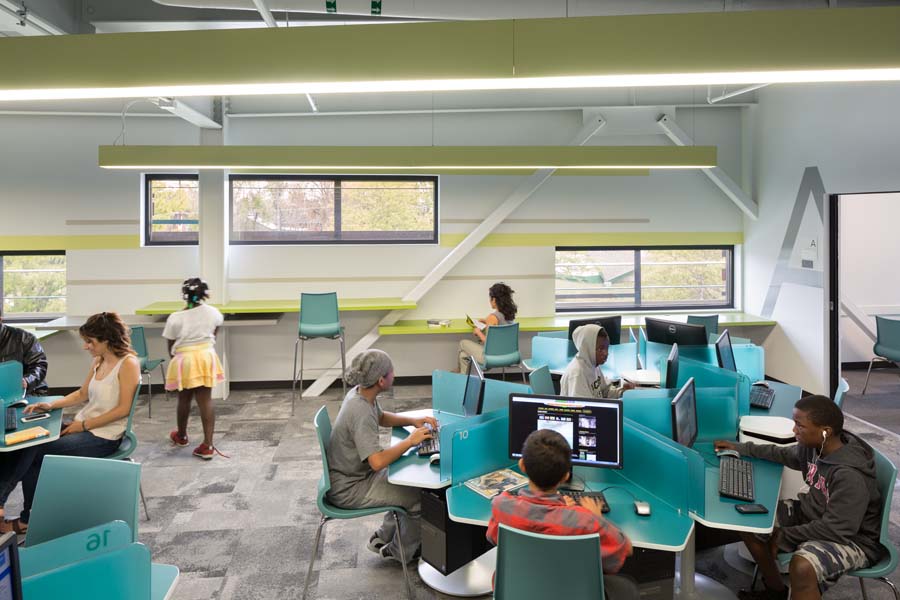 Already significant for its location at the gateway from downtown to the historically neon-lined, gritty West Colfax corridor, the site abuts a major transit thoroughfare with nearby bus and light rail stops and is surrounded by pockets of varying urban density, housing types, ethnicities, and religious backgrounds. Beyond serving as model and catalyst for future development, the need for a library was great. “There were no library services within 30 blocks of this site before it was built,” said DPL Manager Pilar Castro-Reino. Although just a block away, a Carnegie library, built in 1914, was shuttered in 1954. Recognizing a void that went beyond a need for books, the architects conceived the new library as an “incubator for growth” for both individuals and the community and applied the metaphor of building a garden to convey its nurturing role. To foster a sense of common ground, the architects first acknowledged that potential users would be coming from all directions. Like an embracing handshake, the building’s main circulation slices through the first level of the two-story, rectangular building, establishing two main entrances—one at the parking lot and another at the bustling corner of Colfax and Irving. Inside, the entry pathways merge alongside a three-story translucent polycarbonate spine dubbed the “Wonderwall,” which serves to orient users, enclose mechanical systems, and deliver natural light into the library’s core. The luminous wall further defines the “pollination zone”—literally a threshold where patrons from all walks of life converge to check out popular material, ask questions, and learn from each other. 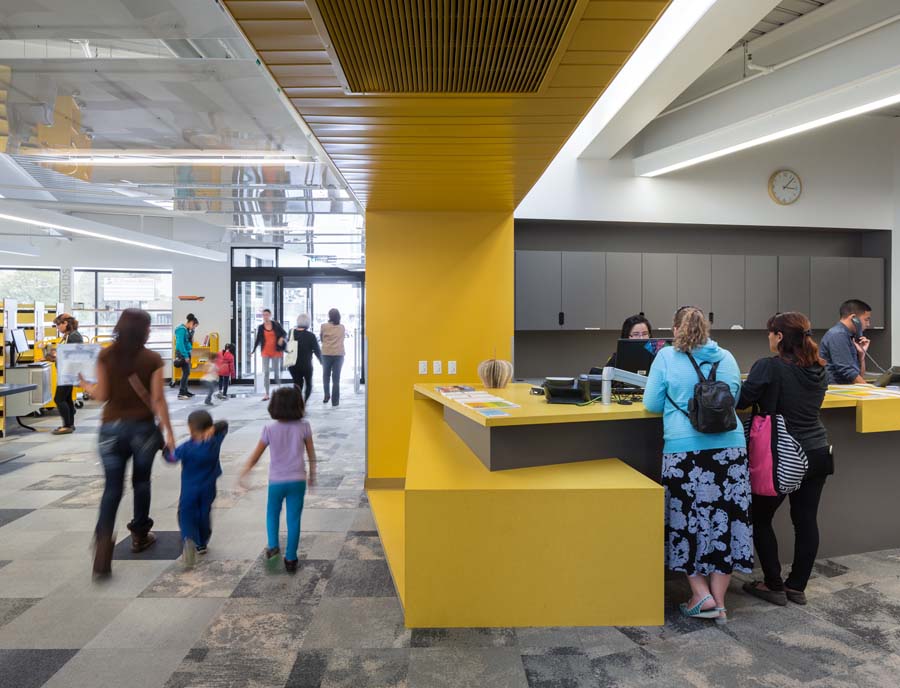 Flanked by a lemon yellow circulation desk that delights with its pop-up book feel and a coffee cart operated by neighboring nonprofit Girls, Inc., the floorplan pivots at the Wonderwall’s center point with DVD selections occupying the brightly lit Colfax street frontage, while community and support spaces spill into a funnel-shaped hallway, all punctuated by a bright and boisterous children’s area that will soon feature an installation by optical artist Ethan Jackson within the Storytime Tower. 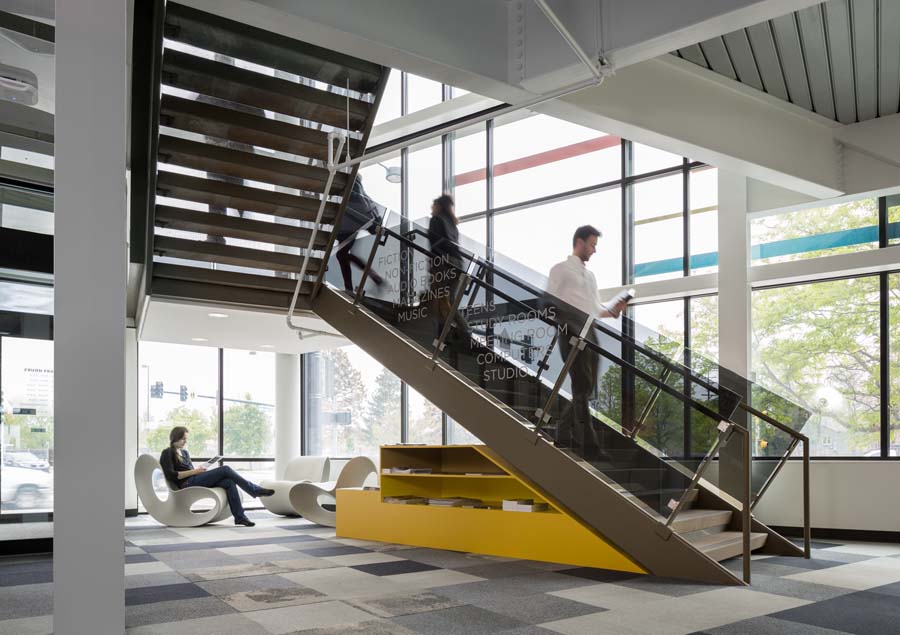 A shaded courtyard on the second floor, surrounded by collaboration space, a music studio, art gallery and stacks, provides a rare library amenity. “We heard multiple requests for a park,” said Montalbano, “so we found a way to provide a respite from the street noise and still be outdoors all within the walls of the library.” Strategically placed windows overlooking Mt. Evans and downtown—offering glimpses of the Capitol dome and the Broncos’ turf—fill the spaces with ambient light and create a visual link to the library’s larger context. 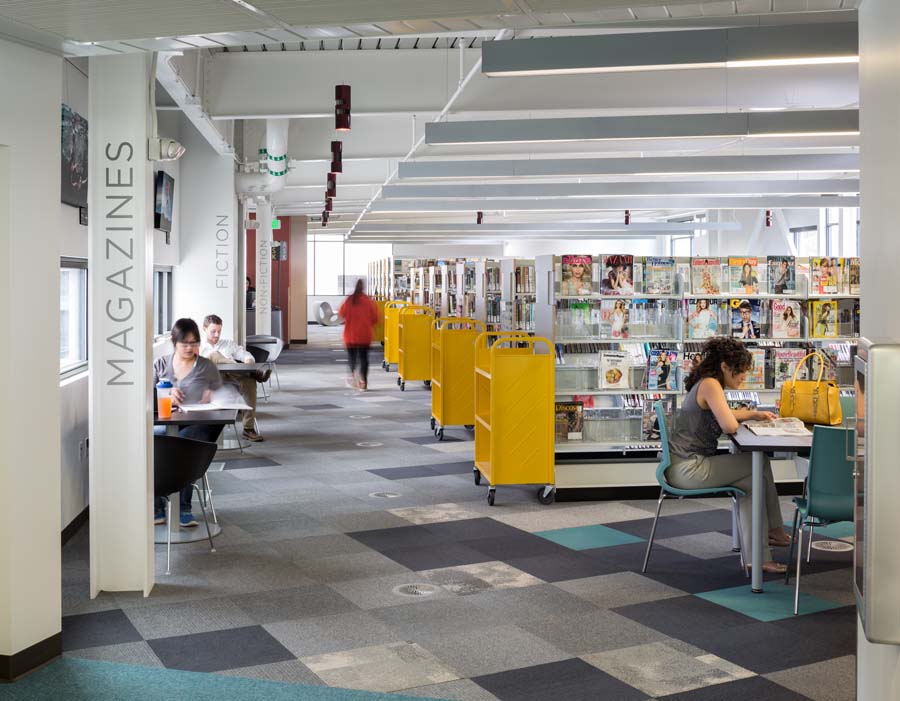 The library’s most striking feature is its use of color and texture. Delving into color theory to identify which colors expand across multiple cultures with common meaning, studiotrope selected vibrant palettes—expressed in flooring, paint, and furnishings-that resonated with the neighboring communities and applied them to distinct zones throughout the library. Drawing meaning and color from such motifs as African kente cloth and Jewish and Middle Eastern hamsa, Montalbano explained, “It’s meant to convey there is a little something for everyone.” 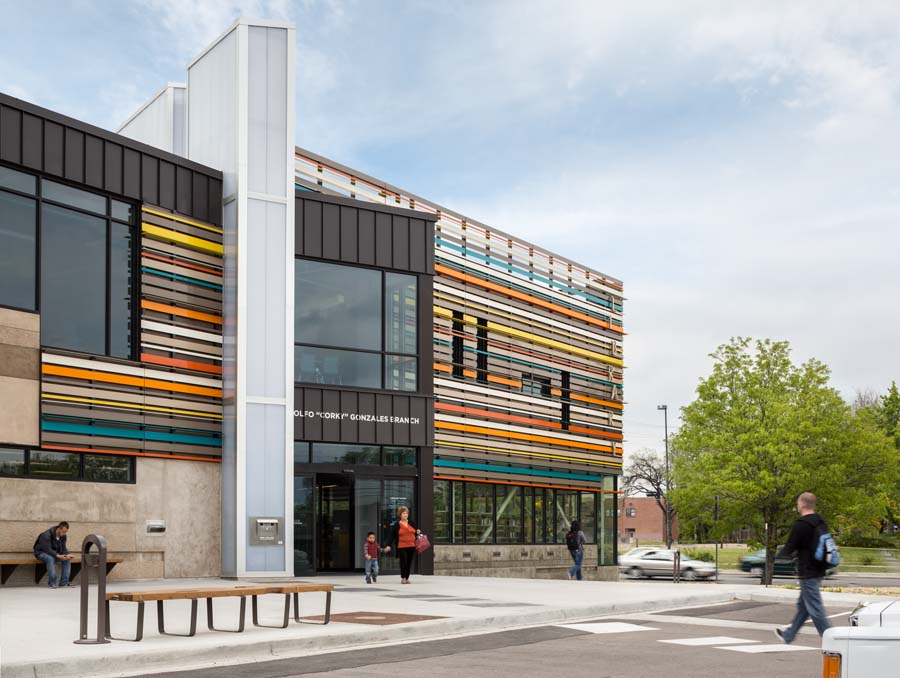 That experience of color is magnified on the exterior, where billboard-sized aluminum bands of saturated hues—blues, oranges, reds, and yellows tempered with neutrals—wrap the building and symbolically weave into the Wonderwall tower to suggest the library’s transformative potential. The articulated surfaces catch atmospheric changes through the course of a day, generating a kaleidoscope of light and shadows, which echo the commotion and tempo along Colfax. At night, the glow emanating from within helps advertise the library as a lively destination that’s equal parts community gathering space, cozy refuge, and magic doorway to infinite new worlds. Just ask Hannah. 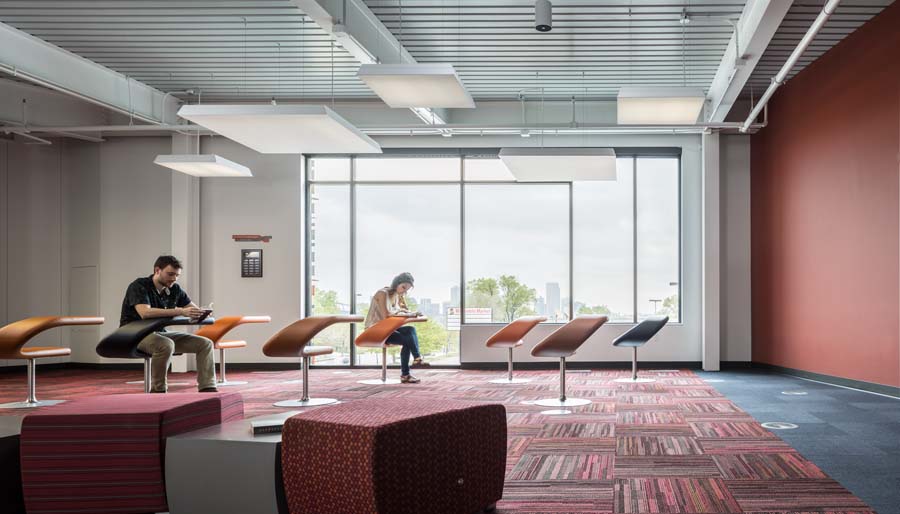