WHAT DO YOU GET WHEN YOU TAKE THE YEAR 1913, COMBINE IT WITH 1977, AND THROW IN A HEAPING HELPING OF MODERN INSPIRATION? FOR ANNA AND STEVE PALMER, THESE WERE THE STARTING INGREDIENTS FOR COOKING UP A BULTHAUP KITCHEN THAT TIED TOGETHER THE ECLECTIC ARCHITECTURE OF THEIR HILLTOP HOME. WHAT MAKES IT STAND APART, HOWEVER, IS THE PERSONAL CRAFT TAPPED WITHIN. 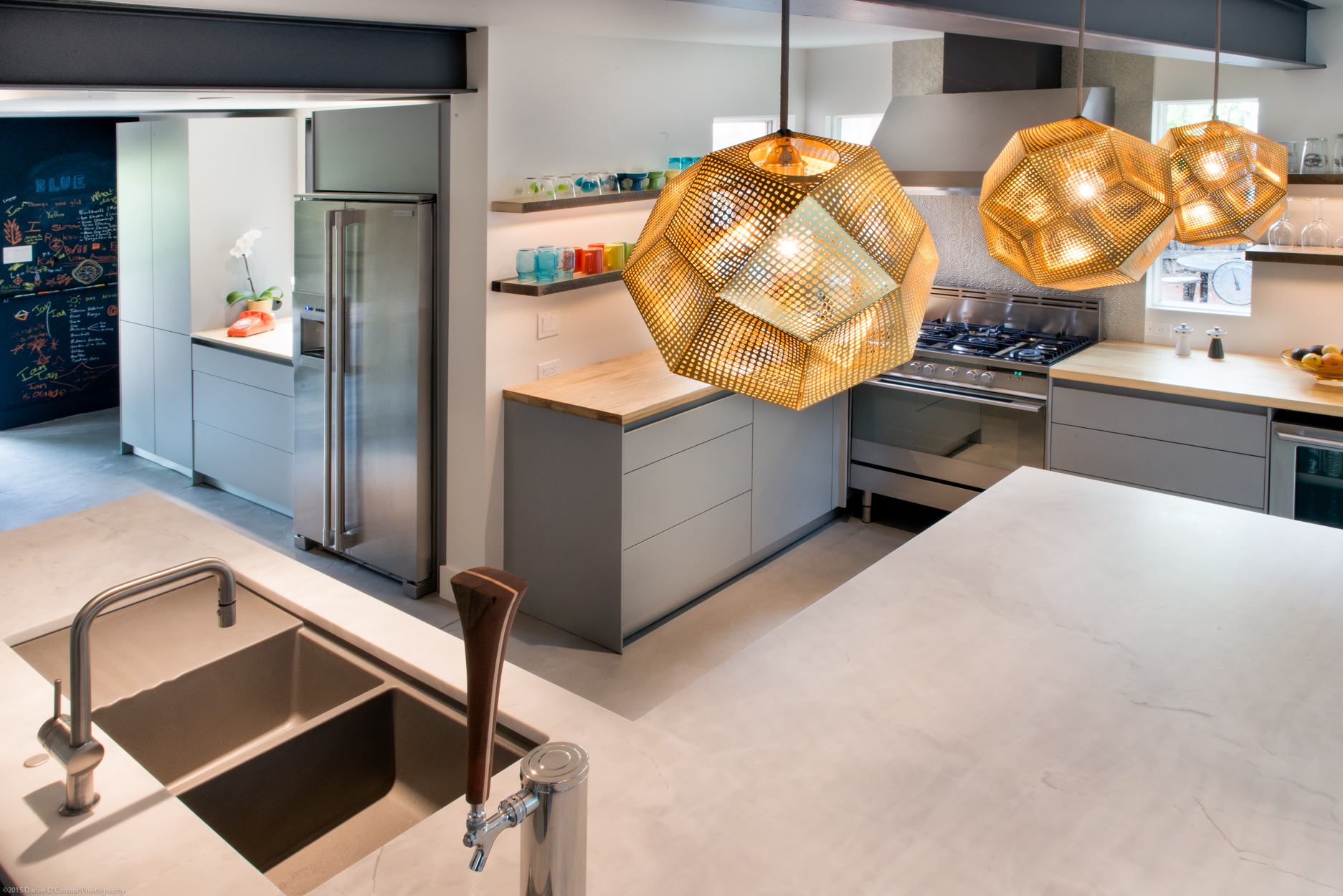 IT BEGAN WITH THE STAIRCASE.

Bisecting the living and kitchen areas, the intrusive escalier closed space that the Palmers wanted to open; clearly the bifurcated flow had to go. But what was the best way to marry modern with the already disparate home, which was half turn-of-the-century and half hailing from the 1970s? How would they put a signature stamp on the space to make it their own? More importantly—how could they ensure that food in the refrigerator wouldn’t become crowded out by Steve’s beer? 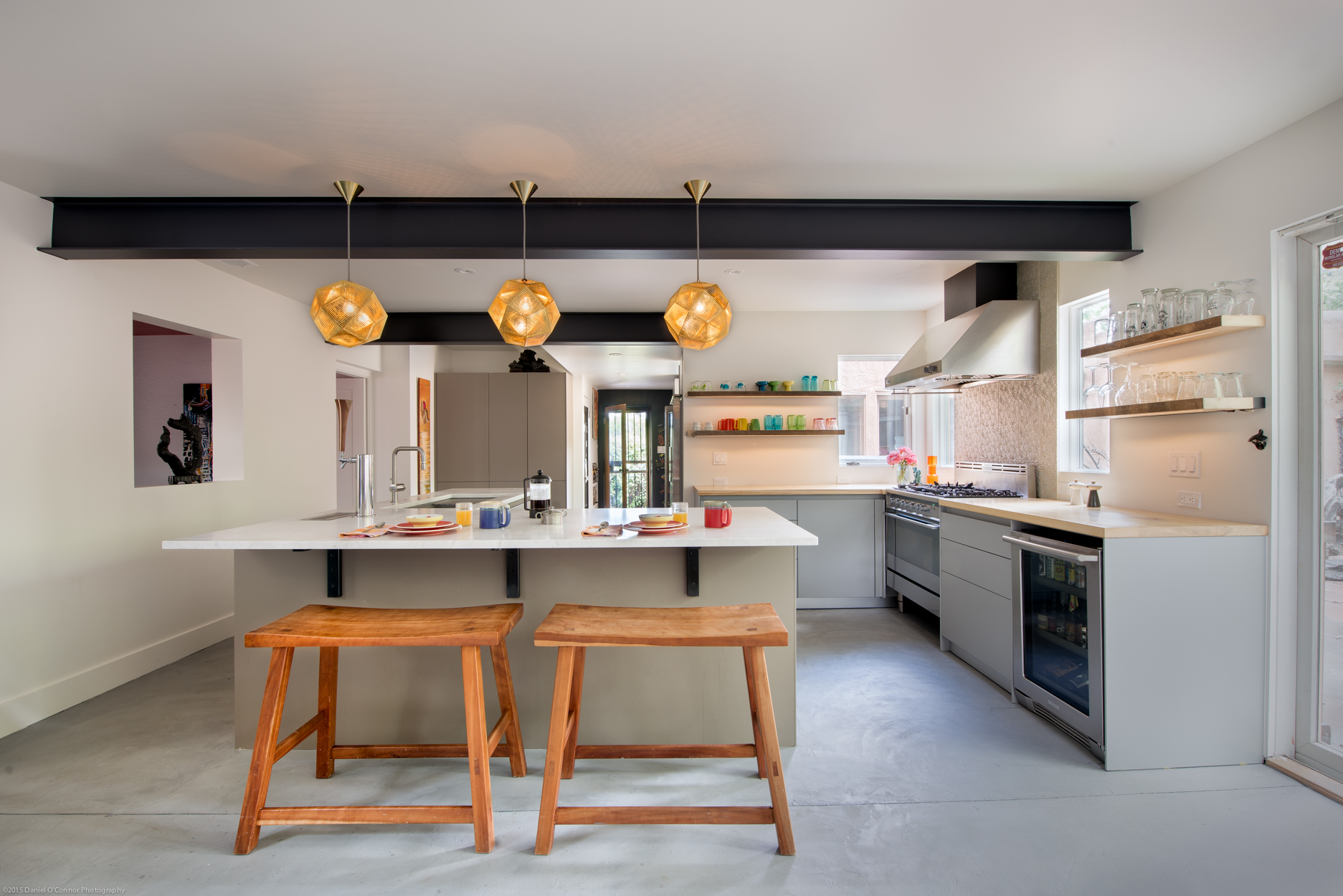 The answer came from working with Jed MacKenzie and William Landeros, Certified Kitchen Designers at the bulthaup Denver showroom (owned locally by Kitchen Designers). Already keenly aware of how they planned to work—and more importantly, live—in their kitchen, the Palmers sought out the boutique vendor to supplement their ideal design. “We went  into the process with a clear idea of what we wanted in the design,” said Anna, “and bulthaup went above and beyond to help us find the right kind of products to execute it.” 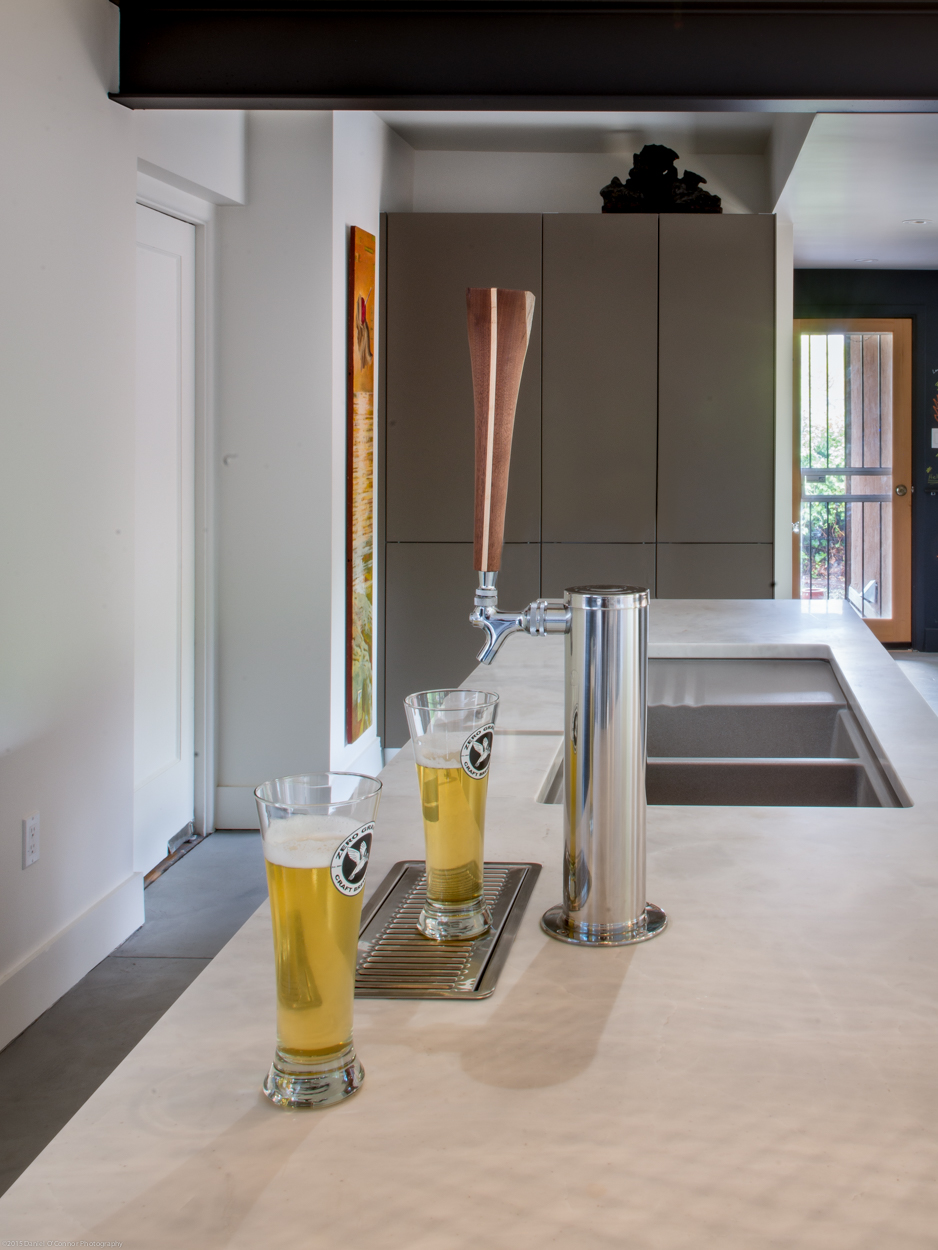 That design, which is all about economization of space, honors the Palmers’ key inclination to have interior flow without any dead ends. As Anna notes, it is often hard to achieve an open kitchen that’s compact enough to cook. “The footprint of the house is tied into the storage and cabinetry to work with the living space within,” said MacKenzie. “Every square inch ends up getting utilized.” And personalized—after all, a kitchen is meant to be lived in. This means a drawer exclusively for water bottles, a “crazy Susan” extension on the spinning-cabinet classic, and storage systems that make even non-lovely things lovely, according to Anna. Or as Steve said, “You’re in a kitchen with surfaces around you. Nothing’s more than three steps away.” And thanks to the brass etch Tom Dixon lights acting as accents, everything is illuminated. 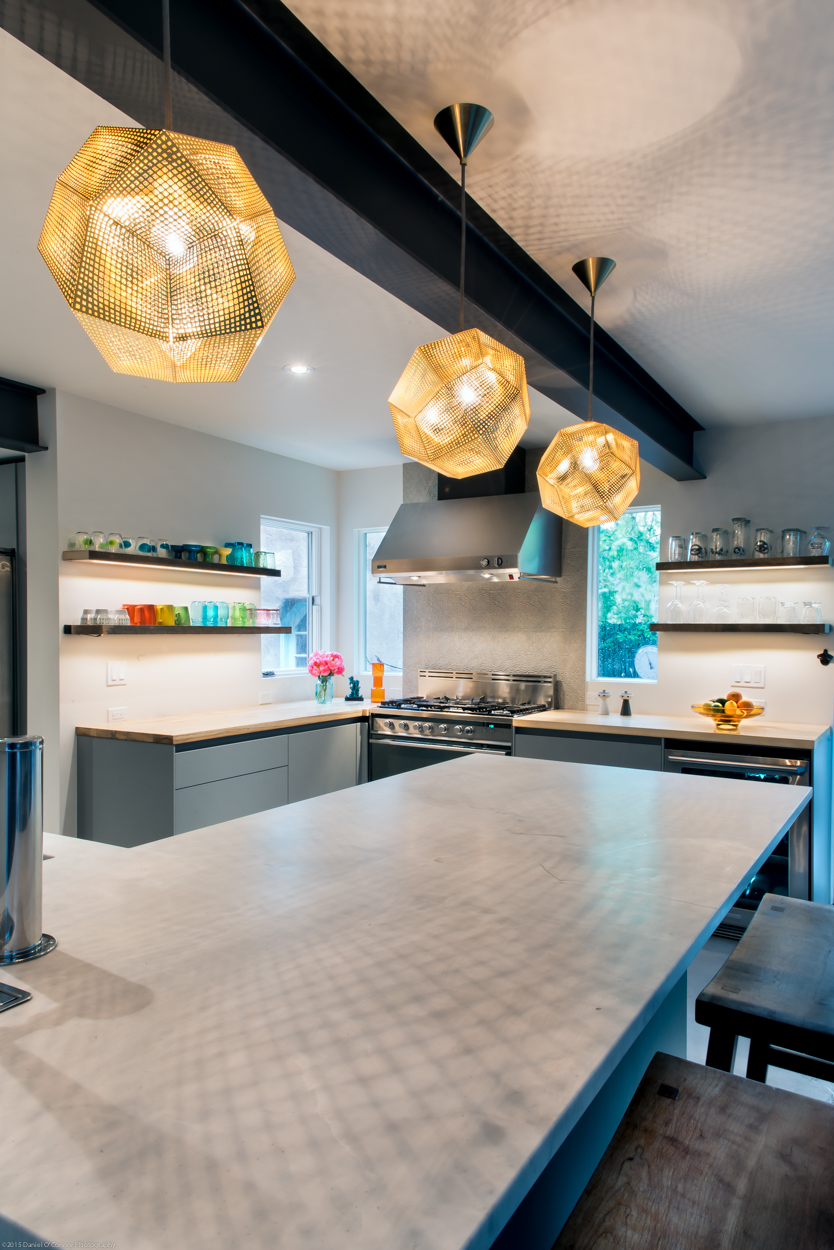 It wasn’t always that way, though. The most substantial project component was removing that divisive staircase binding the compact galley kitchen and laundry room, along with most of the separating perpendicular wall. Expanding the space from two distinct rooms into one proved to be transformative; it opened movement around the L-shaped island, which is outfitted with a composite draining Blanco sink; granite top; and soft-touch copper lacquer cabinets. This, combined with the glueless polypropylene silvergray laminate on perimeter recessed cabinets and hackberry counters, creates a commingling of materials that draws the eyes in understated contrast, rewarding attention to detail. “This project is unique in many ways,” said MacKenzie. “Combining finishes and colors that haven’t been done before—there are layers of subtlety throughout the kitchen that continues into the living space.” 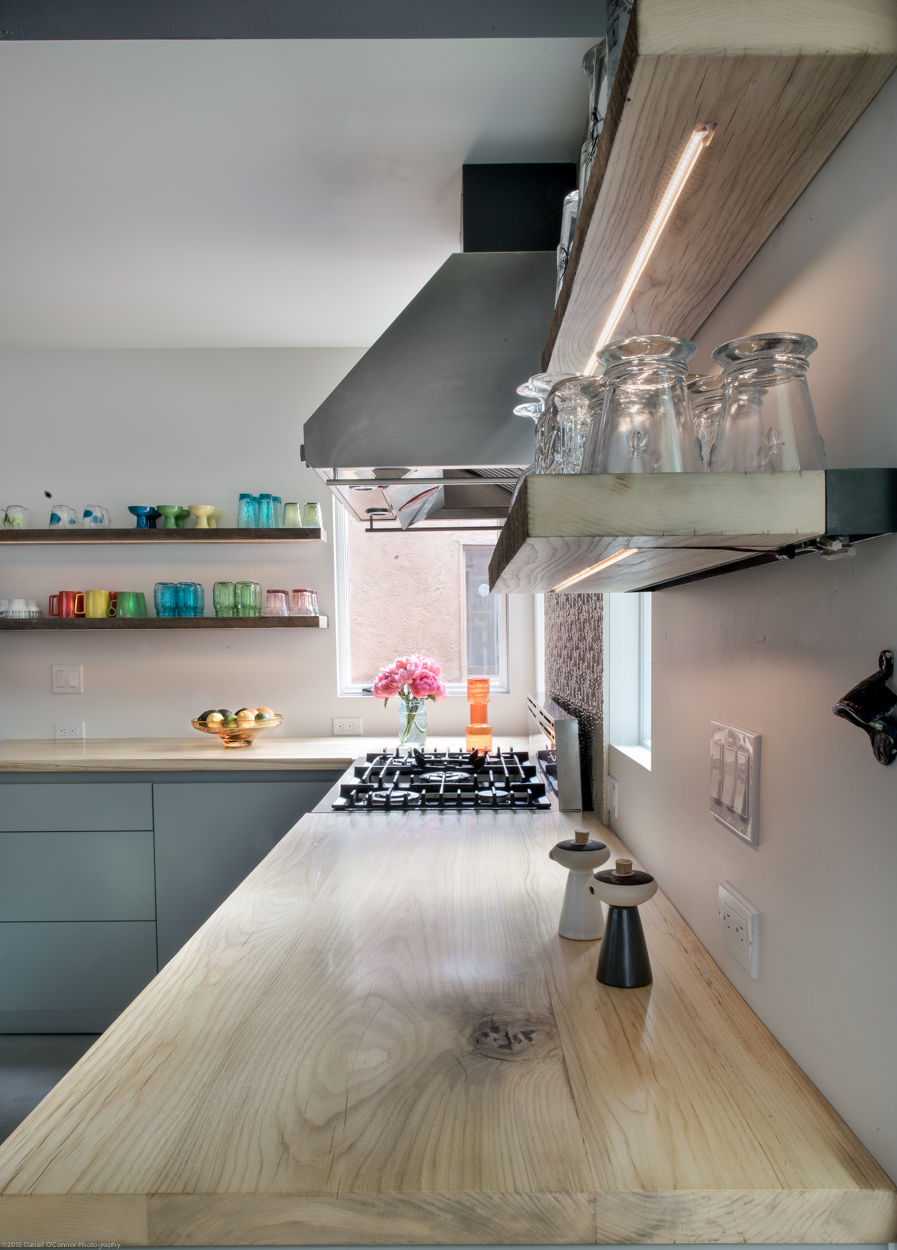 Personal signature is found throughout. Indeed, some of its most notable features are signatory elements truly bespoken to the Palmers’ kitchen design. Recessed LED lighting is integrated underneath shelves handmade by Buildwell’s Ryan Wither, the builder for the project. Behind cabinet pocket-doors, motion-activated LED lights also cast a warm 3000-Kelvin glow. Handmade Ann Sacks tiles comprise the backsplash and were the initial design element around which the rest of the kitchen was coordinated. A passthrough window allows hors d’oeuvres to effortlessly perk up a patio party. A fireplace shelf in the nearby living area is made from extinct Chinese wood known as Huanghuali, which translates to “yellow flowering pear.” 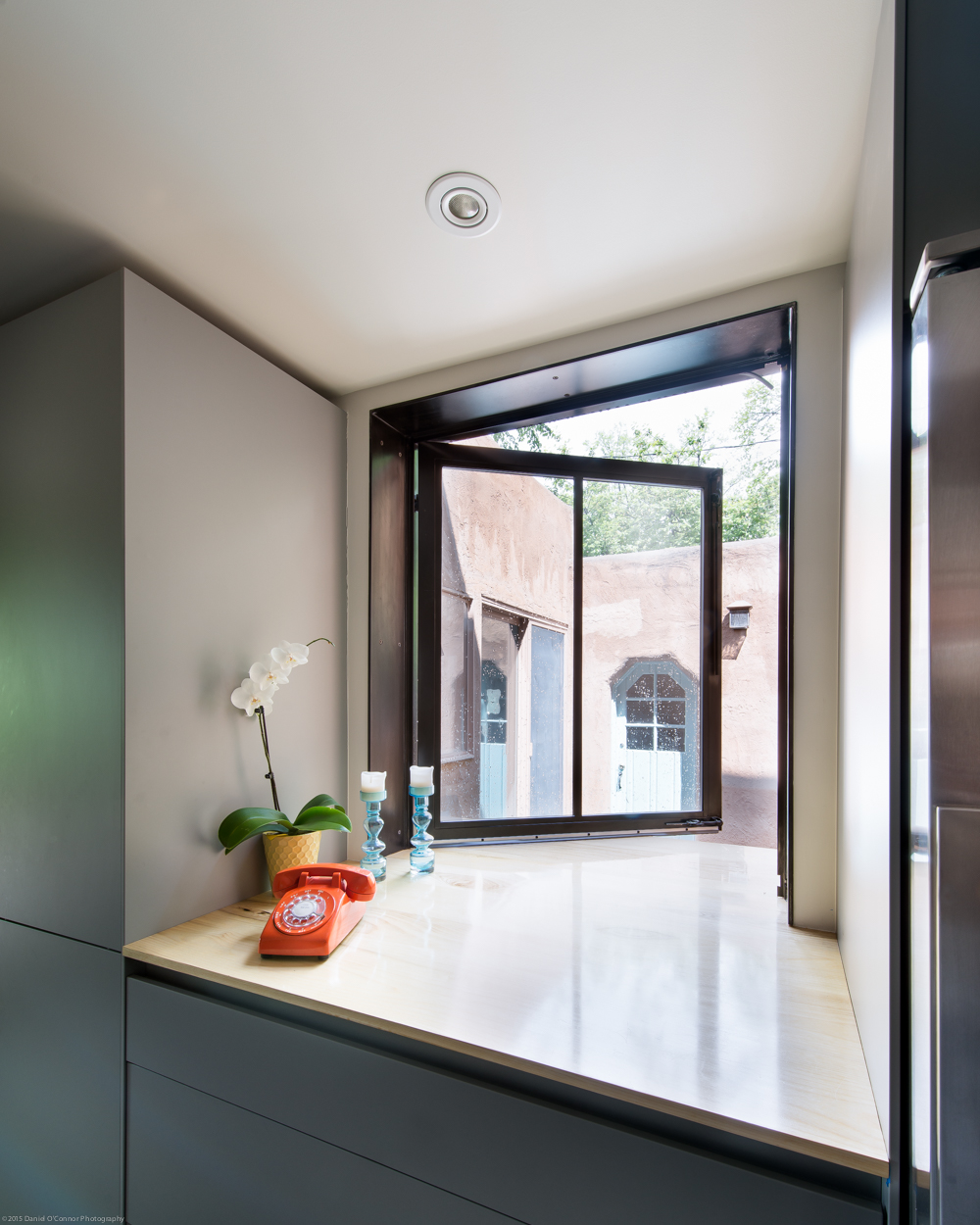 All of these elements enabled the Palmers, with the help of bulthaup, to renovate a unique space to reflect what they refer to as “the patina of life.” According to Anna, Steve mentions an affinity for the space all the time. “I guess there’s something different to love about it every day,” he said. Not the least of which is the beer tap integrated into the kitchen island, which served up a hefeweizen from Prost Brewing during a renovation wrap party and keeps the fridge free for food. Now that’s a true craft. 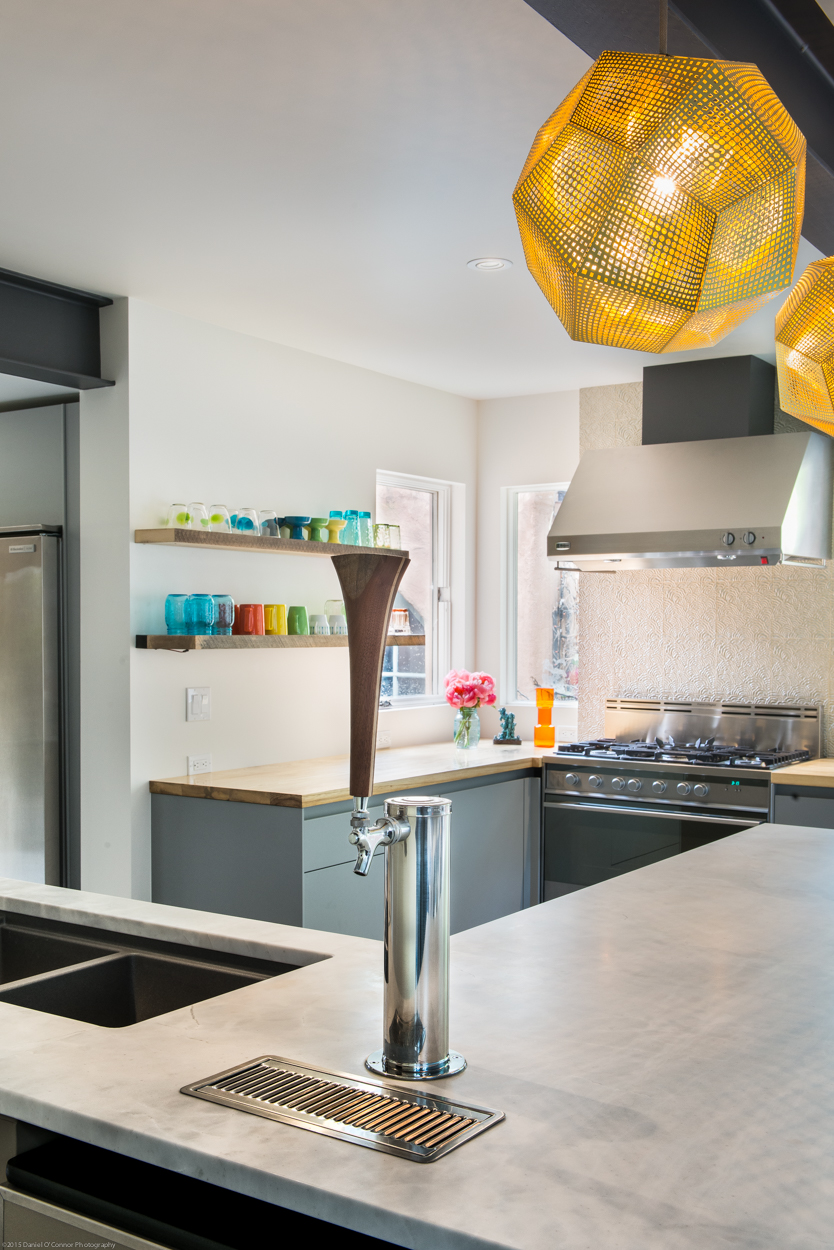