ANTHEM BRANDING DEALS IN THE IMAGE TRADE. WHEN THEY OUTGREW THEIR ORIGINAL BOULDER HEADQUARTERS, THEY TAPPED SURROUND ARCHITECTURE TO DESIGN A PURPOSE-BUILT SPACE TO SUIT—AND ENHANCE—THEIR OWN SPLASHY BRAND. MISSION ACCOMPLISHED. 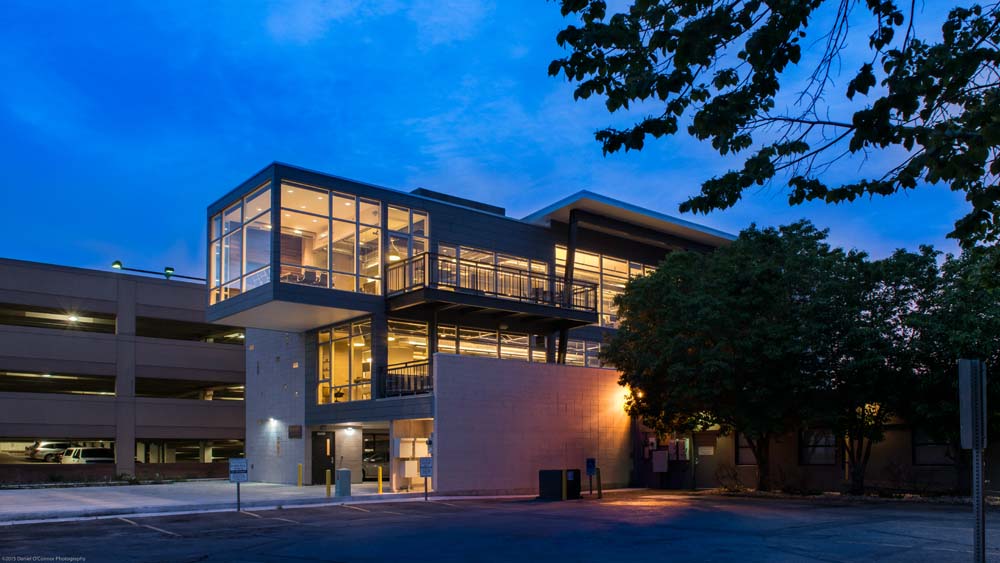 From the gleaming, glass-encased third floor conference room overlooking the heart of Boulder, Anthem Branding Principal and Co-Founder Ted Church looks at peace. He’s seated at the head of a long conference table fashioned out of reclaimed birds-eye maple boxcar from the Santa Fe Railroad, and there’s a sense of calm about him—a confident serenity, as though the viability of this 6,800-square-foot “glass box” was never in doubt. To look out over the midday pulse of Broadway, to glance back over the ambient hum of his casual twentysomething staffers, it’s easy to get the impression that this was destined to work out … that risking so much on the construction of this building was bound to pay off … that success was inevitable. 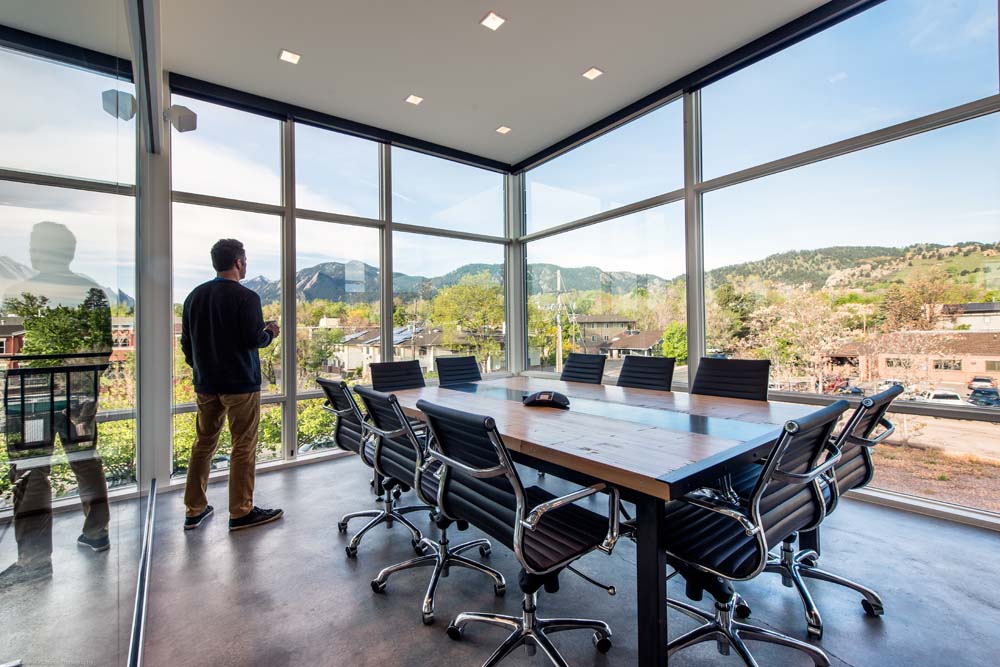 Back in 2012, however, as Anthem was bursting at the seams of its tiny A-frame headquarters, the future was less certain. The agency, which handles advertising, design, and branded merchandising for brands ranging from Google to MTV to White Wave, was rapidly outgrowing its confines. The staff of five had grown to 15 and would soon balloon to 27. There wasn’t room for everyone, and in the boomtown of early 21st century Boulder, there was nowhere else to go.

This was a high-class problem to be sure—but it was still a problem. Church and co-founder Pete Burhop began looking at properties to purchase and renovate. No luck. They thought about leasing an existing building, but that, too, was a dead end. They even considered developing their own mixed-use building, but weren’t comfortable straying so far from their core business. After viewing roughly 50 places all over town and in every conceivable configuration, they had nothing to show for it. “Eventually, we were knocking on doors, unsolicited, and saying, ‘Hey we admire your  space; would you consider selling?’ And everybody said no, because where would they go? It’s such a tight market,” said Church. “There was literally nothing available in a 4,000- to 7,000-square-foot space.” 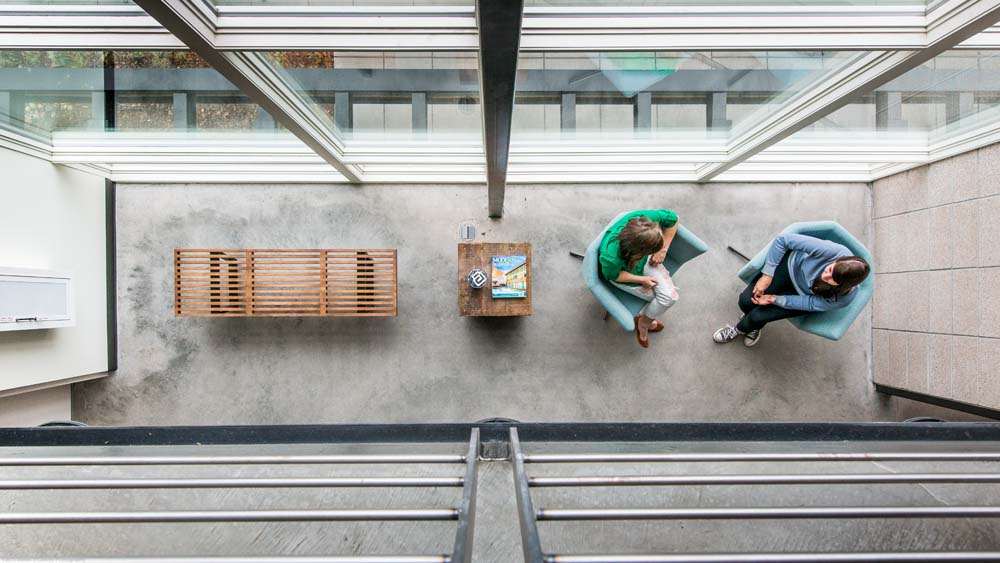 But in a delicious bit of irony, the solution to their problem was already within view. Directly across the street from Anthem’s tiny headquarters sat a vacant, dilapidated building with a choice location and prime views of the Flatirons. They had already dismissed this site once before; scraping and rebuilding seemed like a lot to take on, and their growing stable of clients left little time for such a massive undertaking—but that was before they’d realized there were so few alternatives. Suddenly the potential reward of owning a custom-designed building in which their own business was the sole tenant seemed to outweigh the risk.

Enter Surround Architecture, whose principal, Dale Hubbard, was a mutual friend and a man with deep roots in the Boulder design community. Church, Burhop, and Hubbard, along with fellow Surround architect Tim Laughlin, began sketching out ideas for a true purpose built facility. They needed something that met Burhop’s criteria of a “rad space,” while also comfortably housing their rapidly multiplying staff and still providing enough aesthetic beauty to properly represent a company whose very essence is built around branding and imagery.

The end result is an elegant, inviting blend of clean lines and breathable spaces. The materials are raw and simple, with a heavy emphasis on glass and steel. This industrial flavor is punctuated by subtle organic touches. Natural light dominates; the surrounding beauty of Boulder overwhelms. “We always talked about the idea that the architecture becomes the interiors,” said Hubbard. “It’s an inside-out building. That’s an approach that was always fundamental to our design process.” 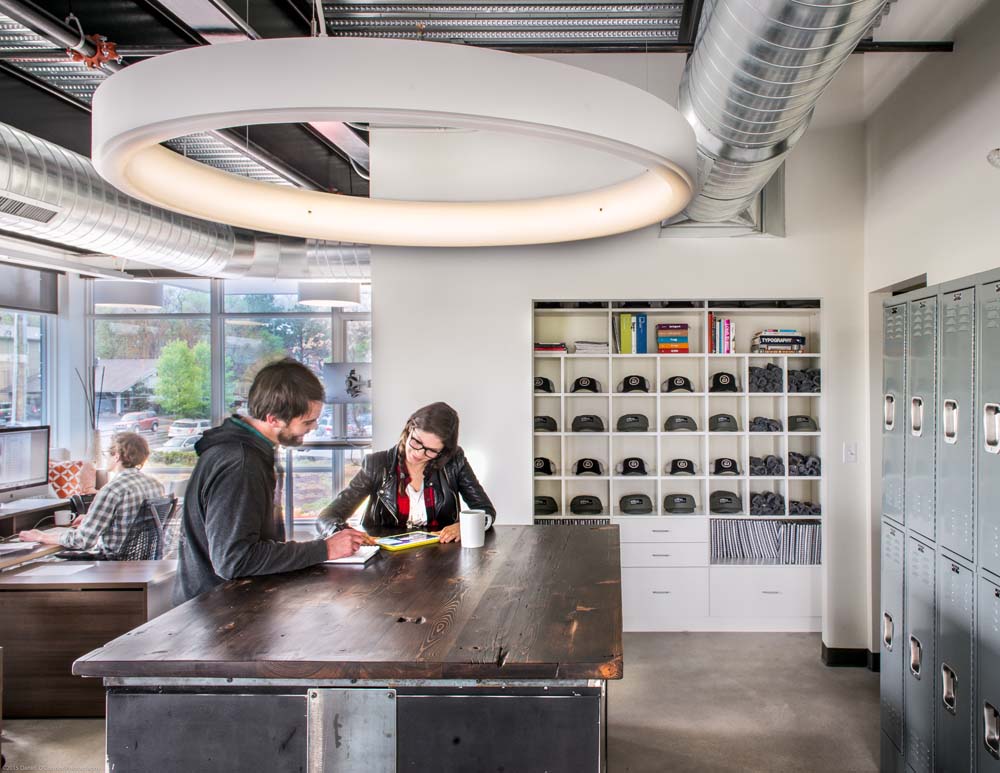 The effect of creating a building this way is two-fold. From practically any desk on any floor, panoramic views of the Flatirons abound. It is the very antithesis of walled-in cubicle life. The impact, however, is equally striking from the exterior, where passersby get an unfettered glimpse of Anthem’s inner sanctum. As day turns to night, the glass box shines brightly amid a string of more traditional office structures. “We wanted to have this regarded as a lantern on Broadway,” said Hubbard. “Boulder is basically built mostly out of red brick and is made to look like a frontier town by nature of the planning process that most structures go through. We didn’t hold back on glass, which was a big move in my mind.” 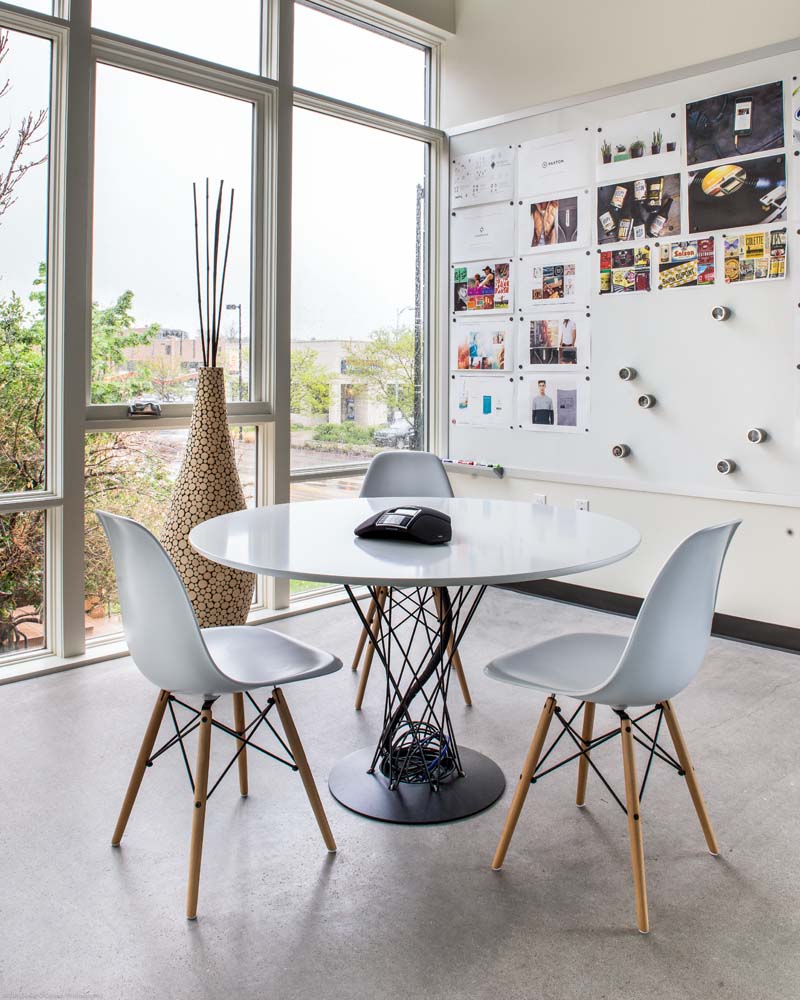 Hubbard also points to some less-obvious design choices which made all that glass possible, and which lend the building a high enough level of energy efficiency to conform to IECC 2012 standards. For starters, they installed residential windows rather than a typical storefront system. The mechanicals are all high-efficiency, the floors are composite slab, and the walls are a single block that manages to accomplish the exterior finish, wall cavity insulation structure, and interior finish all in one piece. Such a streamlined approach made it easier to find room in the budget for all those windows.

Functional flow was also a top priority. Entering from the street, egress stairs lead to the second-story main floor. A modest reception area opens to a full kitchen—site of the weekly Tuesday meeting and, on this day, a half-eaten box of foodie doughnuts. A nearby door opens to one of three expansive on-site decks, giving Anthem staffers a comfortable place to work or relax on nice days, and a place where clients sometimes host community-based social events. The Delta Fassade cementitious rain screen that lines the exterior walls means there is no need for paint and no need to worry about water damage. (It looks handsome, too.) 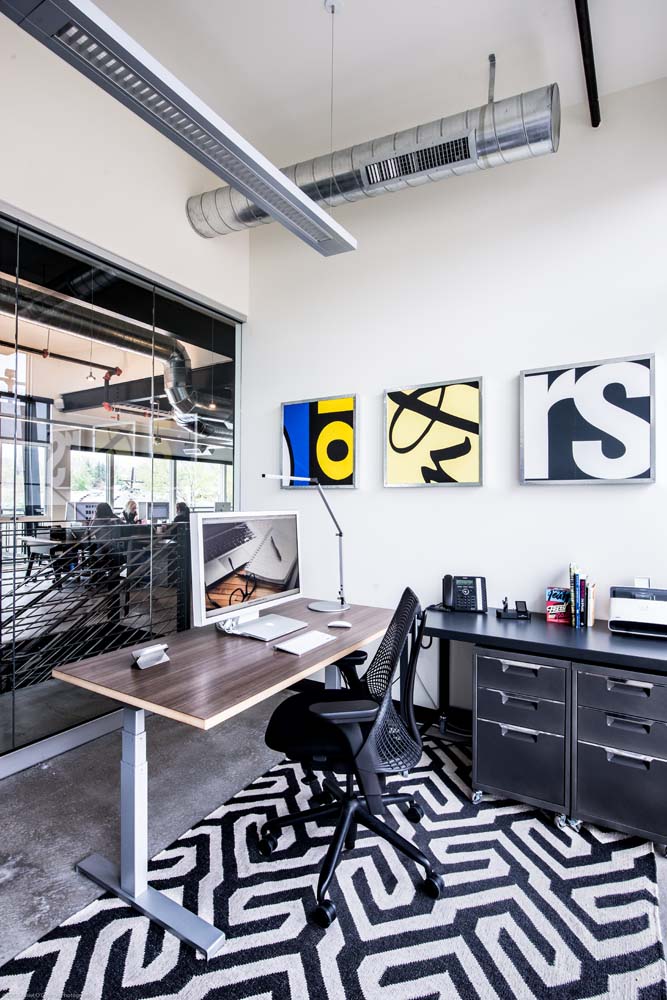 Back inside, windows cradle everything. A wide-open layout is anchored by sleek Watson Tonic benching desks, where designers crank out, among other things, T-shirt concepts for Anthem’s substantial apparel business. The benching is noticeably free of clutter thanks to a built-in power supply. There isn’t a tangled cord in sight. Further back, staff lockers offset two full bathrooms (complete with showers), a collaboration island by Jake Kirkpatrick (an identical twin resides upstairs), and a swag closet overflowing with branded caps, T-shirts, and notebooks. The far rear of the building sports the mightiest views and thus was the only suitable home for this conference room now draped in late-afternoon sunlight. There’s another egress staircase tucked around the corner leading to the on-site parking lot.

At the building’s literal and metaphorical center is the main staircase: a 5,500-pound piece of single-beam steel that rises dramatically to the upper floor while providing just enough cover for a playful zen garden underneath. It is the handiwork of Coalesce, a Boulder-based custom metal fabrication shop that also handled both the front and back egress stairs. Church calls this the building’s “showstopper,” but there’s more to it than the wow factor. “We wanted to have the separation between the two departments for obvious work reasons,” said Burhop, pointing out that the main-floor creative teams operate in a much different way—and often at a much lower decibel—than the top floor account teams. “But we still had to foster some connectivity. We didn’t want to lose that.” As a result, the staircase is positioned front-and-center, at the very heart of the building, and is wide open at either end. Anthem staffers find themselves drawn to this central staircase, which creates greater circulation and more interaction between departments. 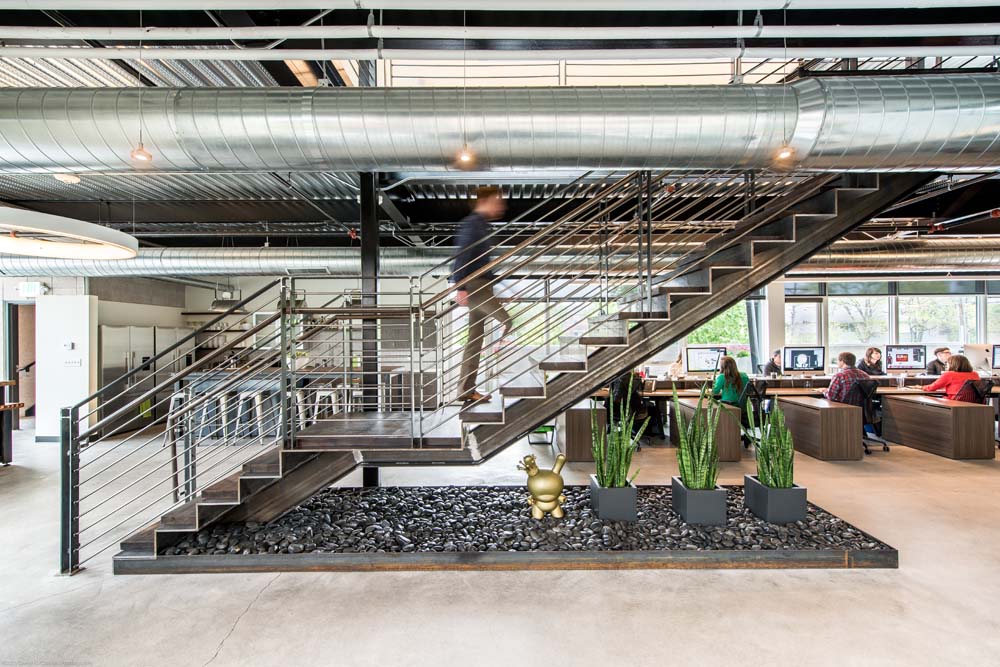 At the top of that staircase is a third floor that largely mirrors the one below it, but with a fully stocked beverage center at the front and three private offices along the perimeter—the only private offices in the entire building. Church and Burhop have outfitted their spaces tastefully but modestly, with great attention given to functional beauty: amidst individually appointed offices and pictures of their families, each is centered by a Watson Seven desk, which adjusts from seated to standing in seconds. It’s a nice luxury to have, especially given that both seem more likely to be out on the floor with their teams or off-site visiting clients than seated at their desks. This is how business gets done in a modern agency. 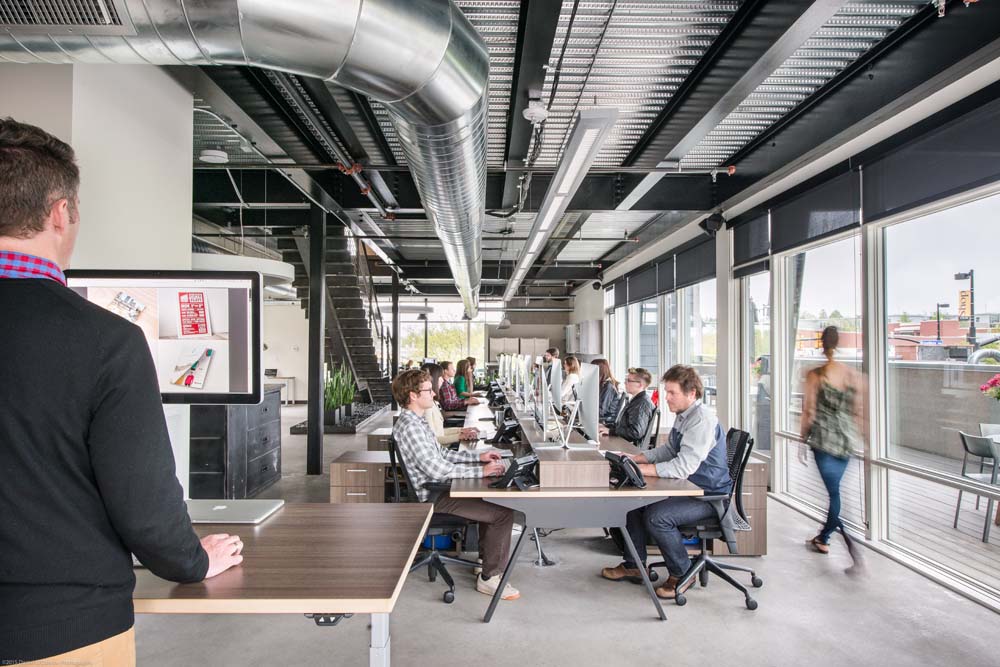 There was a time when Anthem looked like it might outgrow Boulder. Exceeding the confines of their original space and reduced to knocking on strangers’ doors in hopes of finding a new home, it’s not hard to imagine anxiety creeping in. But it’s telling of Church and Burhop that rather than being discouraged, the challenge only strengthened their resolve. “We’re raising our kids here, and we’re invested in this town,” said Church. “This town’s been good to us, and we want to be here. There was never any question of going anywhere else.”

Having access to Hubbard, Laughlin, and Surround Architecture didn’t hurt, either. “I think when there’s a purity of intention, people see that reflected in the end product,” said Hubbard. “It doesn’t matter if it’s a building, or a logo, or a magazine. And what I like best about this building is the clarity of intention, and the simplicity of the execution.” 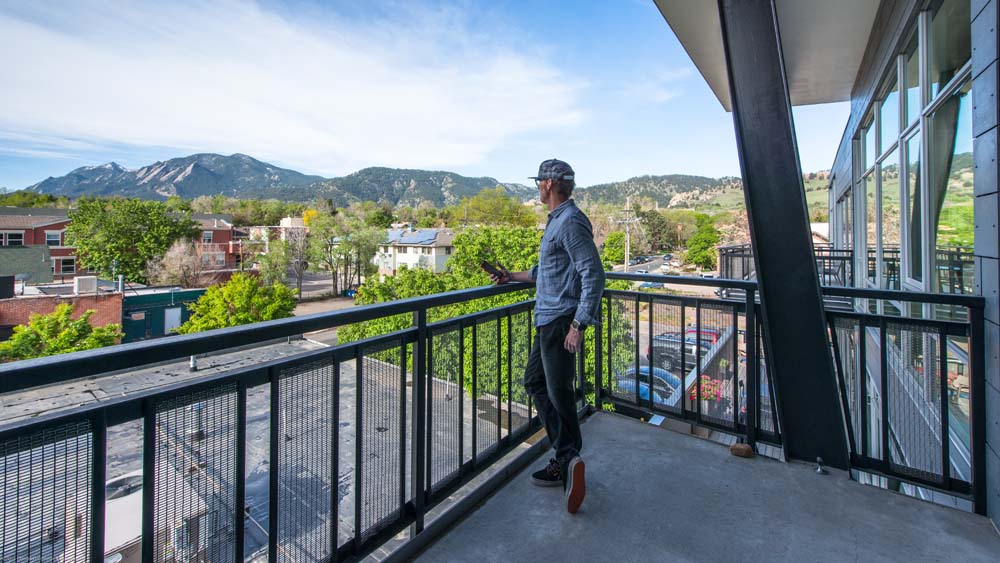