A ONCE-FORGOTTEN BUILDING IN DENVER’S UP-AND-COMING RINO DISTRICT IS REBORN AS A LUXURY SHOWROOM FOR MODERN OFFICE DESIGN. WHAT SETS THE NEW STUDIO COMO SPACE APART ISN’T JUST THE FURNITURE ON DISPLAY. IT’S THE COLLABORATIVE JOURNEY THAT AWAITS WITHIN, COURTESY OF LOCAL DESIGN FIRM LIVSTUDIO. 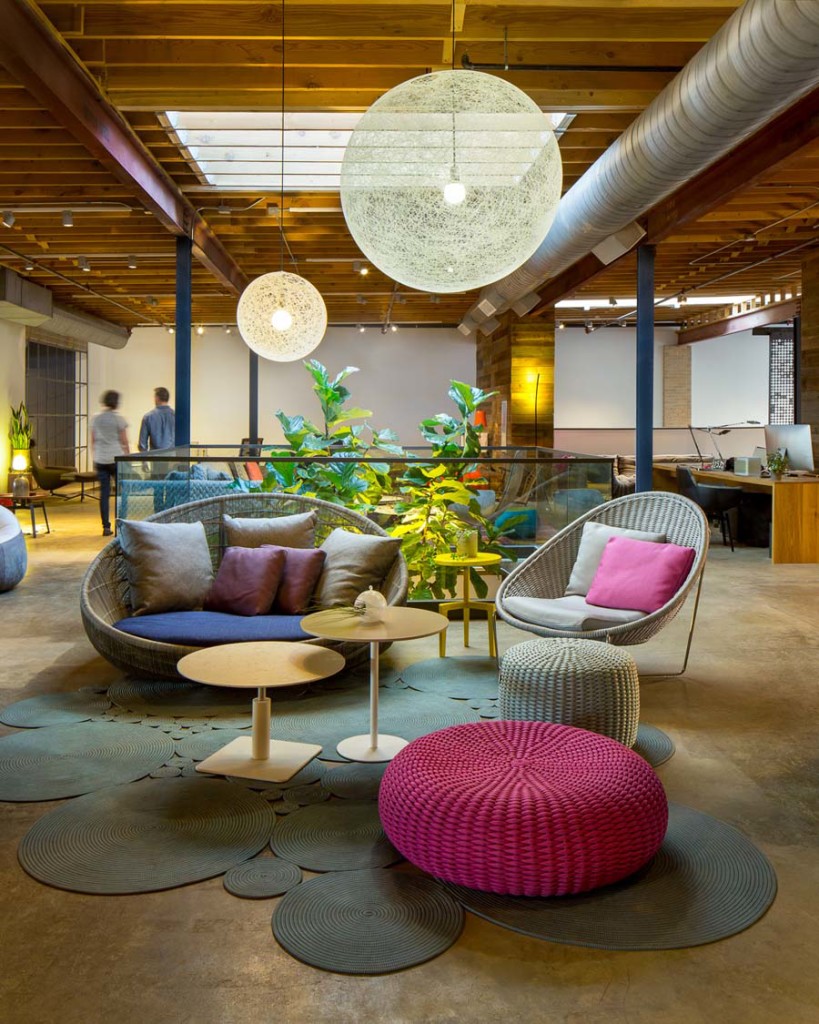 THE WAREHOUSE AT THE CORNER OF BROADWAY AND WALNUT WASN’T ALWAYS GLAMOROUS. IN FACT, BEFORE BRAD FENTRESS SWOOPED IN AND TRANSFORMED IT INTO THE NEW 24,000-SQUARE-FOOT SHOWROOM FOR HIS OWN STUDIO COMO, THIS WAS A DISTINCTLY UNHIP INDUSTRIAL SPACE DEFINED ONLY BY THE HUNDREDS OF BOXES OF LEGAL FILES WHICH LINED THE FLOORS IN EVERY DIRECTION.

WHAT A DIFFERENCE A YEAR MAKES. 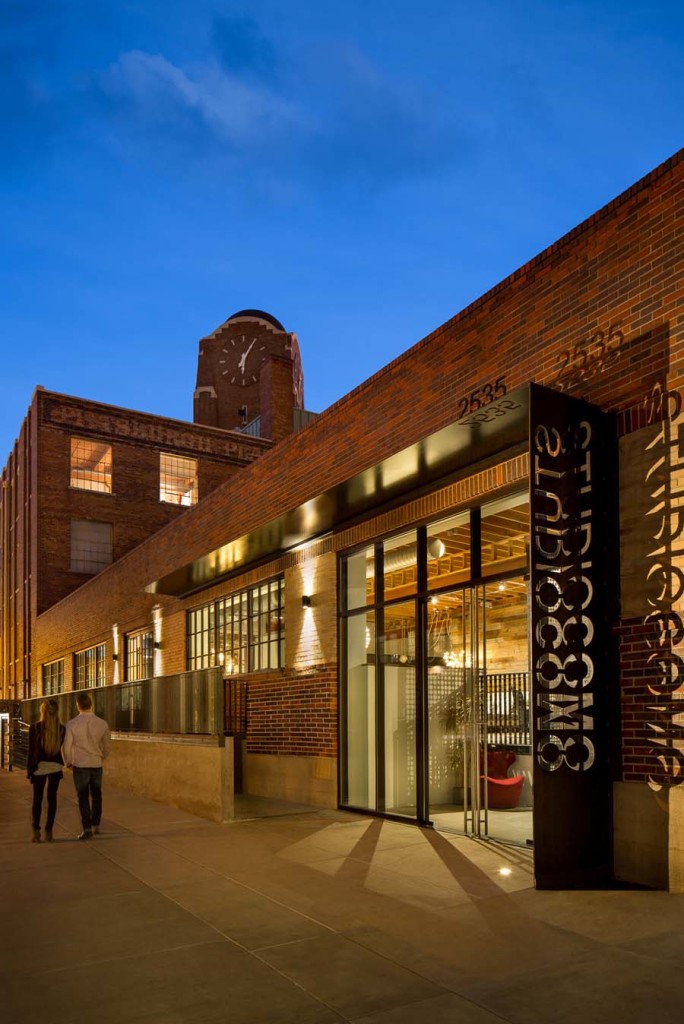 When doors opened in early February, Denver staked claim to a modern design showroom unlike any other for thousands of miles. After roughly a decade in smaller spaces across the street, the sheer size of the new Studio Como allows Fentress the luxury to mix and match a wide range of exclusive European brands—including B&B Italia, Minotti, Poliform, and others—in ways that few showrooms, on this or any other continent, can manage. But for a business dedicated to selling the best contemporary European modern design, simply tossing lots of fancy products into a sprawling space wasn’t enough. “A lot of other showrooms feel very museum-like,” said Fentress. “They’re beautiful, but they’re not Colorado. So we had a very specific vision for a showroom that was warm and organic. We wanted to show people what these products would look like in a Colorado environment.” 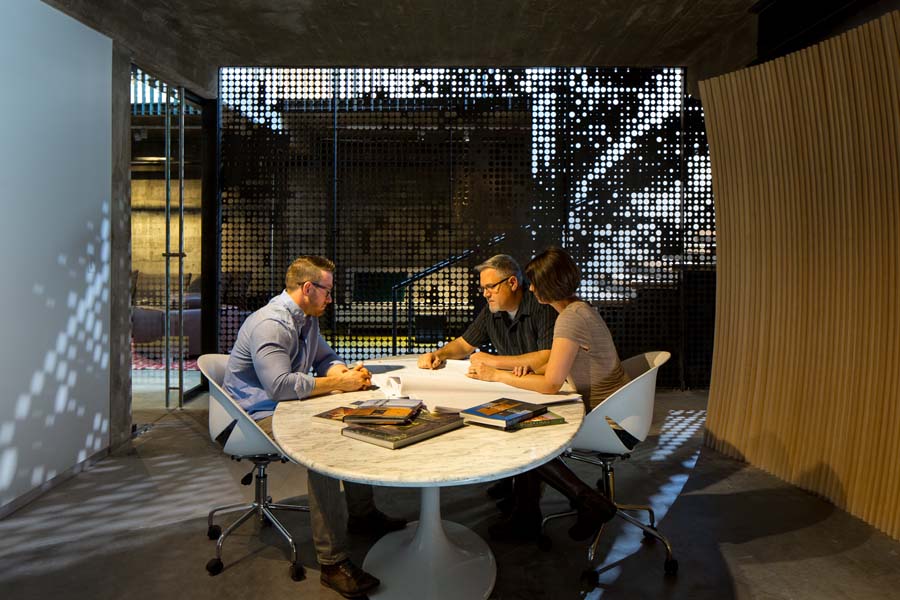 To make that vision a reality, Fentress sidestepped the major design firms and opted instead for the boutique, Denver-based LIVstudio. Led by husband-and-wife principals Brandon and Tana Anderson (and with critical contributions from multi-talented protégé Adam Steinbach), LIVstudio has made a name for itself locally with projects like Thump Coffee and West End Tap House. But despite the growing portfolio—and a collective resume featuring stints at powerhouse firms like Roth Sheppard and Lake Flato— Fentress knew that tapping LIVstudio for such an ambitious project was a calculated risk. 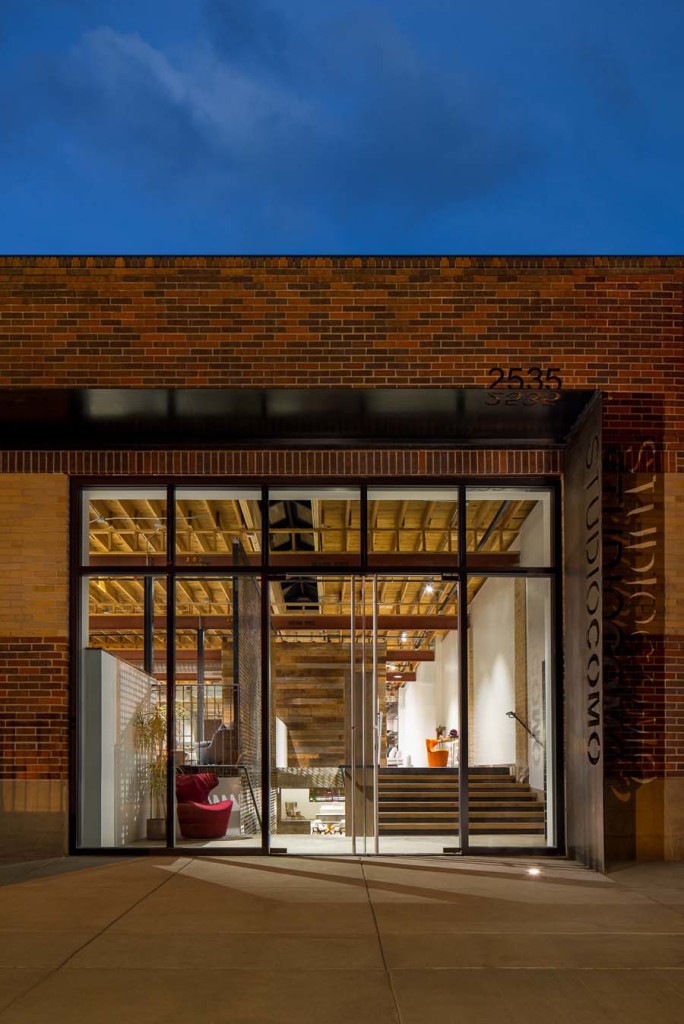 That risk paid off. Everything about the new Studio Como speaks to the priorities that Fentress and his chief collaborator, Design Director Leah DiGennaro, established for creating an inviting space that promotes creative collaboration. Primary materials are featured, blended, and re-imagined throughout: steel beams, reclaimed wood, modern glass. The exterior entrance marks the first appearance of recurring Austrian barn wood, shipped specifically for this project. Vertical fins, cocked at an almost imperceptibly different angle, rest atop board-formed concrete bearing the same grain pattern as the barn wood. This serves to break up the loading dock in a way that’s unique to the neighborhood but compelling in its own right. 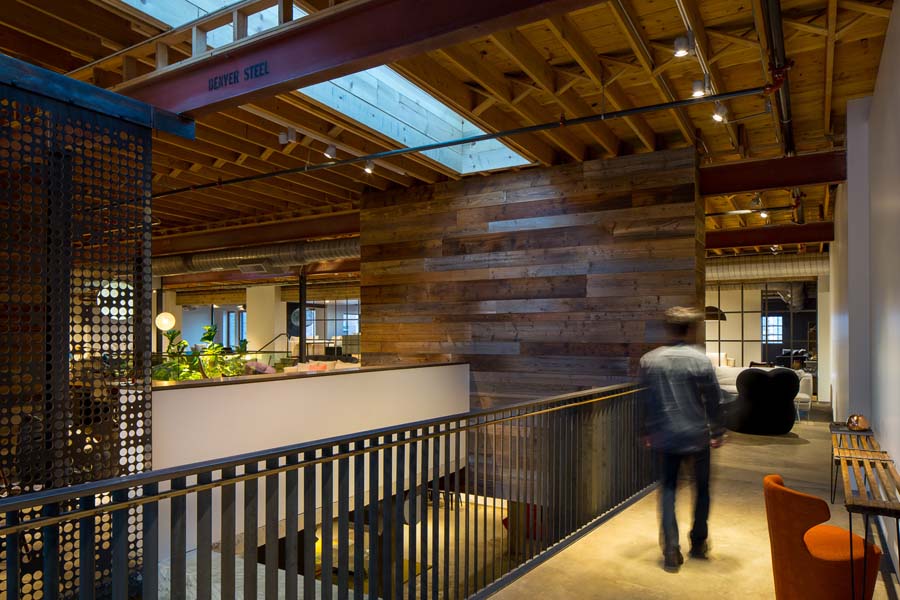 Once inside, a long runway flanks an eye-catching fabricated steel curtain, which artfully divides the showroom from the entry sequence. Far from an ordinary steel fixture, this piece features countless tiny holes—created using a water jet CNC machine—and projects an aerial view of Denver’s cityscape. When visitors are at last deposited onto the showroom floor, it is not at the front or the back, but near the core. And that’s when the journey really begins. 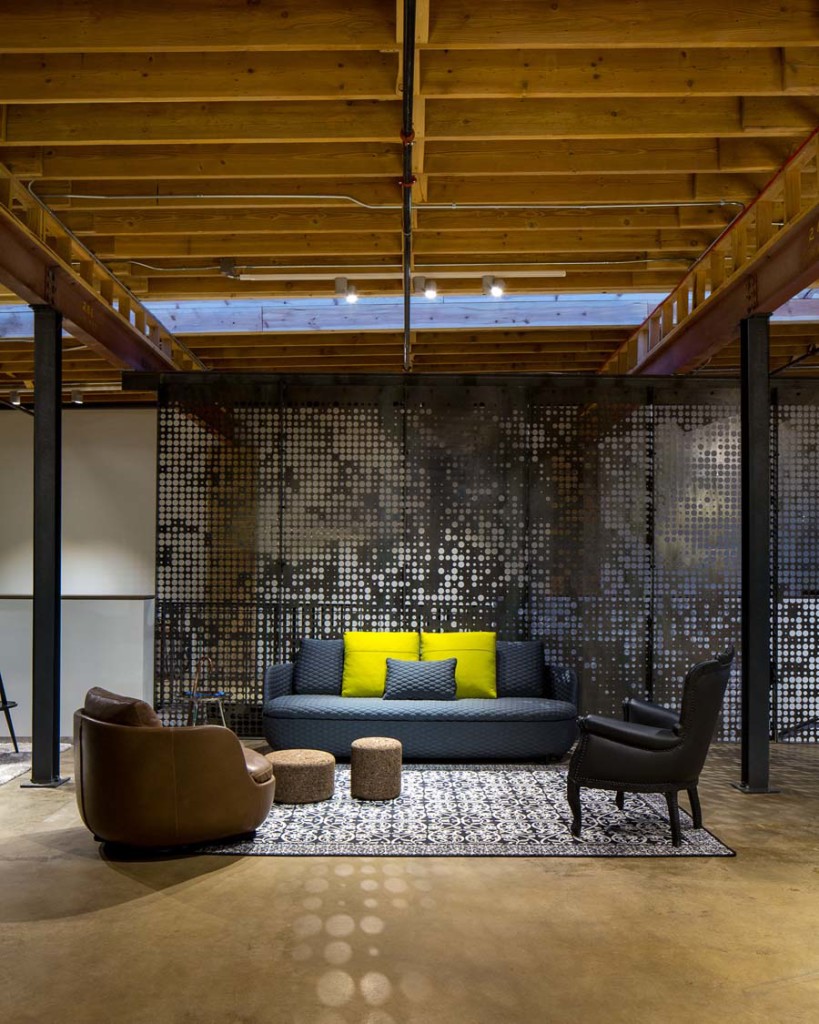 Moving through Studio Como is an exercise in propulsion. At every turn, there’s a sense of being pulled gently toward not just the furniture on display, but also toward a series of painstakingly realized architectural details. At the building’s center, a skylight shines on a fiddle leaf fig tree reaching upward from the lower level—one of many “moments of light” that LIVstudio prioritized throughout the building. Windows along the front are bracketed by red brick at the top and bottom, maintaining just enough of a historic bent to complement the thoroughly modern environment within. 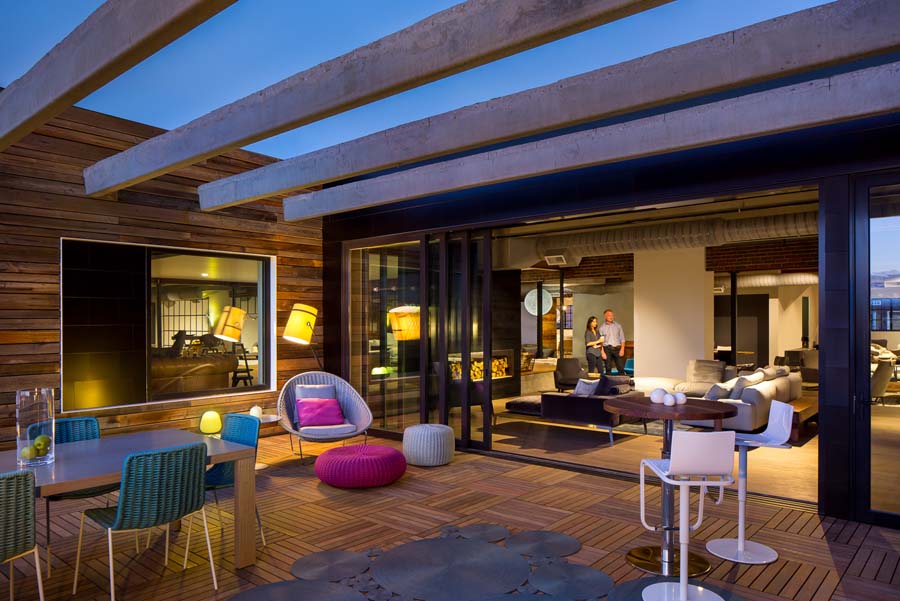 Elsewhere, dramatic horizontal windows tease and manipulate light to striking effect. Along the rear wall, massive glass doors open to a patio that provides breathtaking panoramic views of the mountains. The very existence of this patio is remarkable given that a large transformer impeded its construction for more than six months. As the process of redirecting power lines beneath the alley dragged into October, no work could be done on the roof or back half of the building, and workers weren’t allowed within 10 feet of the power lines. 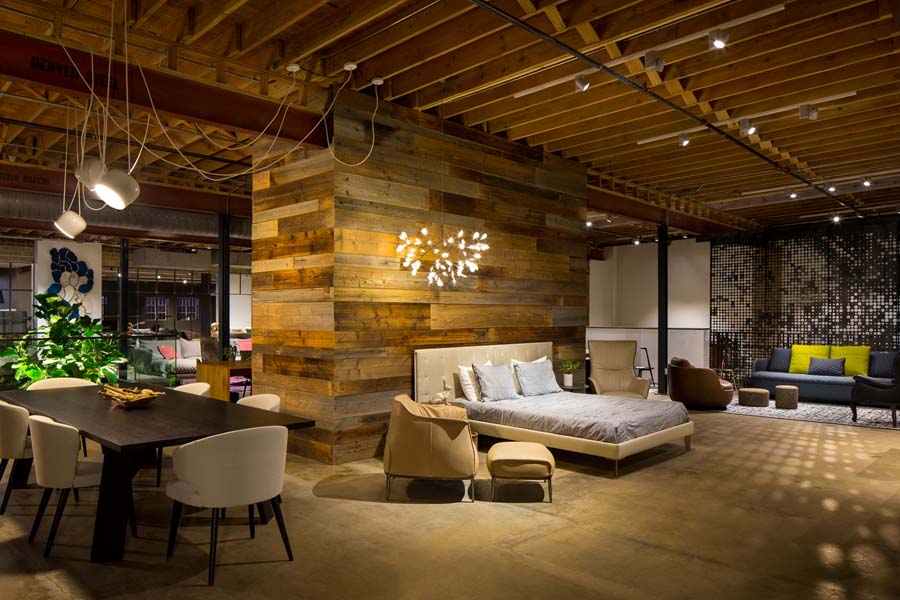 While the practical constraints of renovating a historic building were considerable, the larger task of unifying a sprawling, multi-level space remained. As much as any other challenge they faced, the LIVstudio team was conscious of the need to engineer a cohesive flow that would bring together each disparate element comprising the showroom floor. This meant creating proportional spaces that give proper context to the residential furniture on display. 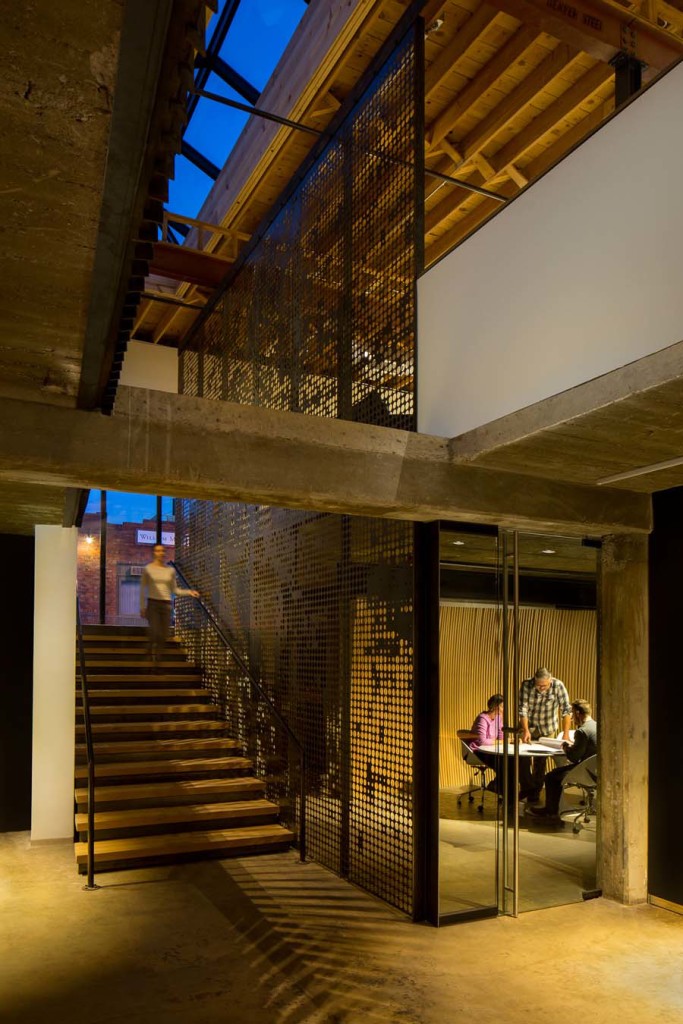 Raised floors account for some of that, as does the creative use of divider walls, many of which were used to bring ductwork from the roof to the lower level. “Anytime we needed to do that, we used it as an opportunity to put in a wall to break things up and create separate bedroom and living spaces,” said Brandon. 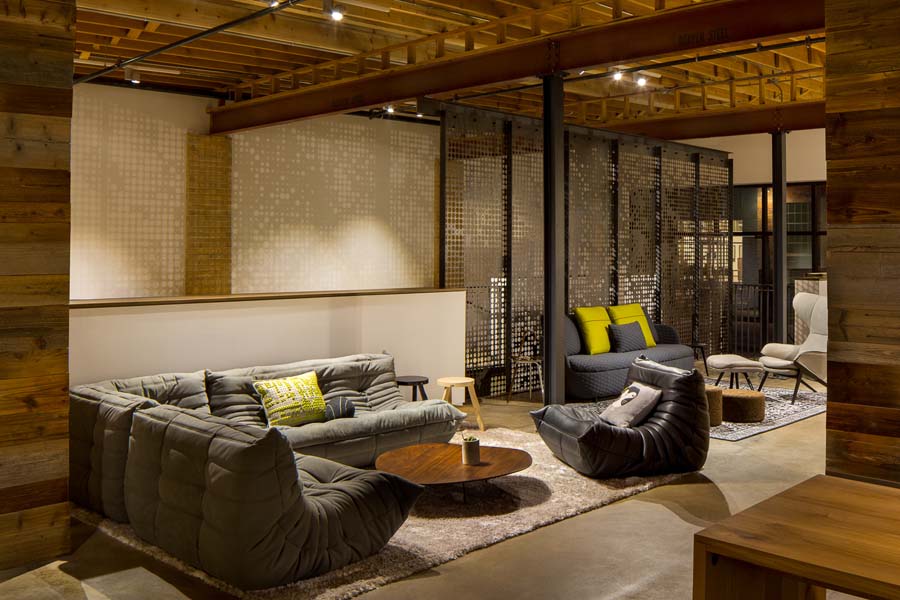 The thoughtful use of space extends beyond the main floor and into the lower level, where upscale kitchen and closet displays eventually give way to a handful of office suites. Those suites have been leased to other, complementary businesses—including Arrigoni Woods, The Denver Shade Company, and even LIVstudio. They were hand-picked to enhance the collaboration factor for clients, architects, designers, and each other. Tenants enjoy unfettered access to the showroom, which is open to them any time of day, and in return, their specific expertise may be called upon as Studio Como’s clients come and go. “This really is a place for designers to come and collaborate,” said Tana. 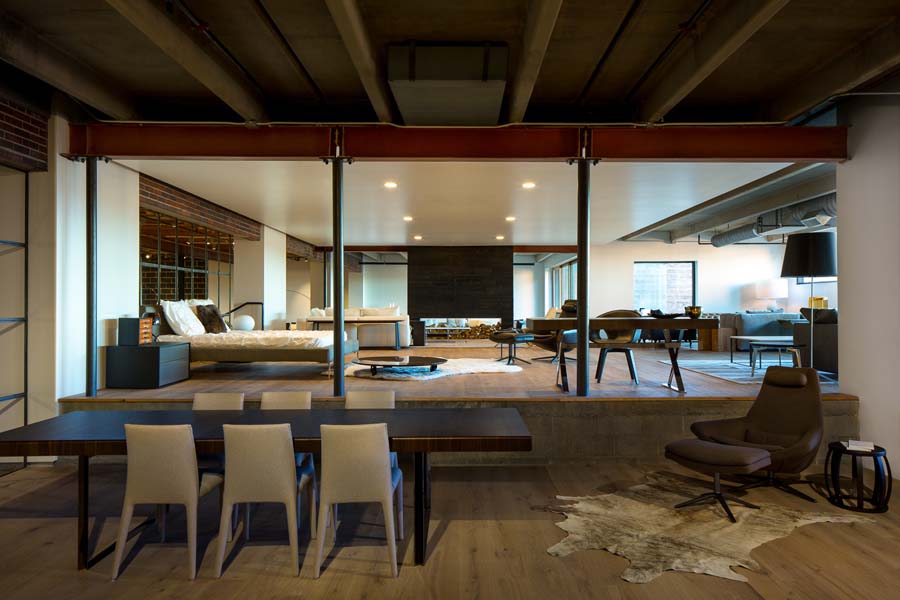 After many months of planning, designing, constructing, and problem-solving, the new Studio Como is a showroom that reflects a contemporary European aesthetic while maintaining, in Brandon’s words, “an echo of the industrial history of the building”—none of which is accidental. From the outset, the LIVstudio team understood that this building, this business, required a timelessness that doesn’t apply to every project. Restaurants may thrive on the strength of trends, and many retail outlets may value a comfortably static environment for their customers. But in order to meet both the short- and long-term needs of Studio Como, LIVstudio needed to craft a space that would maintain its freshness even as the styles on display shift and evolve. To create a showroom whose sparkle never goes out of fashion. Which is all well and good, but is it functional? “When you walk in the front door, you don’t just see a big open space with 24,000 square feet of furniture in one room,” said Fentress, who knows a thing or two about the effective use of space. His first Studio Como showroom, in 2004, was a whopping 800 square feet, with no windows. He’s got considerably more real estate to work with now, but efficiency doesn’t necessarily mean maxing out the floor plan. Each area is specifically designed to show furniture to scale, with full living and dining rooms meant to facilitate active design work. “There are lots of different viewpoints throughout,” he said, “and everything is in a generous and honest space without seeing 10 other sofas in the background. One of our goals is that people come in and feel like there’s not a dead space in the whole showroom.” 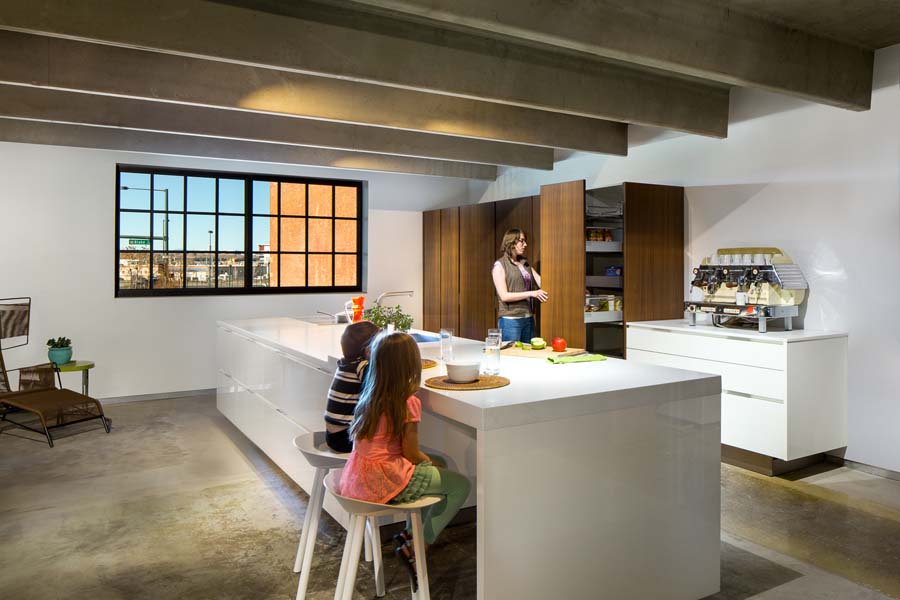 One year ago, 2535 Walnut was no such thing. Back then, it was little more than an oversized storage facility for a nearby law firm. But Brad Fentress saw something in this space, and he saw something in the design team he engaged to help bring it to life. Where there was once just dust and paperwork now resides a showroom that represents an overwhelming number of the top luxury European furniture manufacturers in the world, each harnessed to complement their specific Colorado surroundings. There is certainly nothing else like it in the middle of the country, and Fentress believes there may be nothing else like it in all of North America. For the team at LIVstudio, getting to this point was a feat of both artistry and endurance: part marathon, part walkabout. As Tana said, whether it be this or any project, it’s important to let the building itself guide you. “The site will tell you what’s right,” she said. “But it’s a journey.” Brandon concurs, but not without a small caveat. “It’s about listening to the building … but also about listening to the client.”