IF LEWIS AND CLARK WERE ALIVE TODAY, WOULD THEY CALL EACH OTHER BFF’S OR USE A GPS TO NAVIGATE? #ROADTRIP? 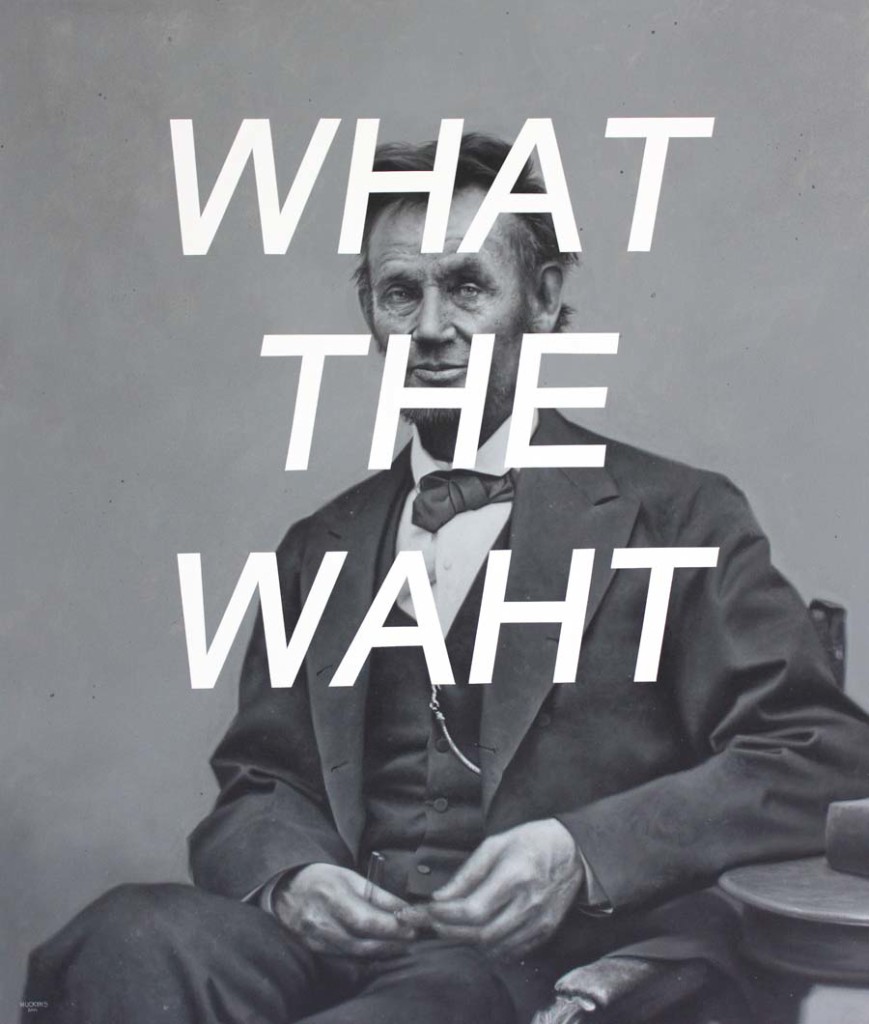 Artist Shawn Huckins strikes a humorous chord merging past and present in his latest exploration, The American__tier. Ambient light and Mile High City inspiration flood his back room studio where Huckins can be found pouring into his current series. With pop-culture slang and social media jargon superimposed over replicated 19th century paintings and photographs, American frontier explorers are given new voice. Born into a line of craftsmen, Huckins has worked devotedly with his hands from a young age: He inherited his first oil painting set from his grandmother at 9, disciplining himself in the art form ever since.

Beginning April 17, Goodwin Fine Art presents Huckins’ painting expedition where viewers are sure to contemplate the consequences of our modern-day lexicon and, perhaps, crack a smile. We caught up with Huckins to learn more about his latest series, his unique process, and what followers can expect in the future. 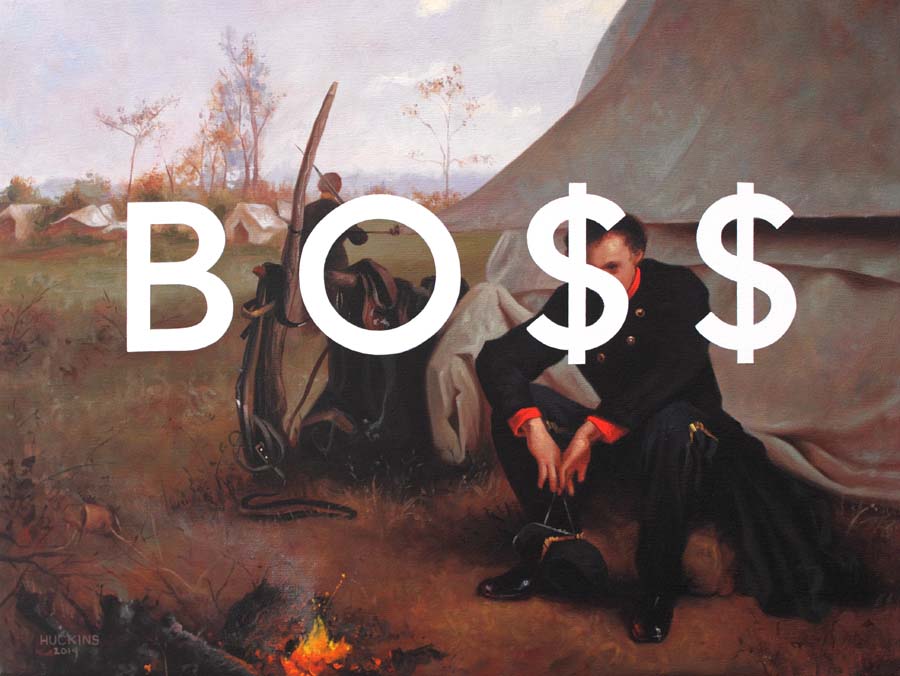 MODERN IN DENVER: THERE ARE SEVERAL STEPS TO YOUR PAINTINGS. WHERE DO YOU START?
I begin with a digital sketch, drafting several compositions of text over an image. Both are then drawn onto canvas and the letters are masked off and burnished down, followed by the first layers of underpainting. The face is the life-blood of the painting, so I always start with the face and skin tones. Once I’m happy with the face and other fleshy elements, such as hands, I work from the background forward. Near completion, the letters are peeled and touched up with white paint. I may add glazes to the portrait to improve vibrancy. 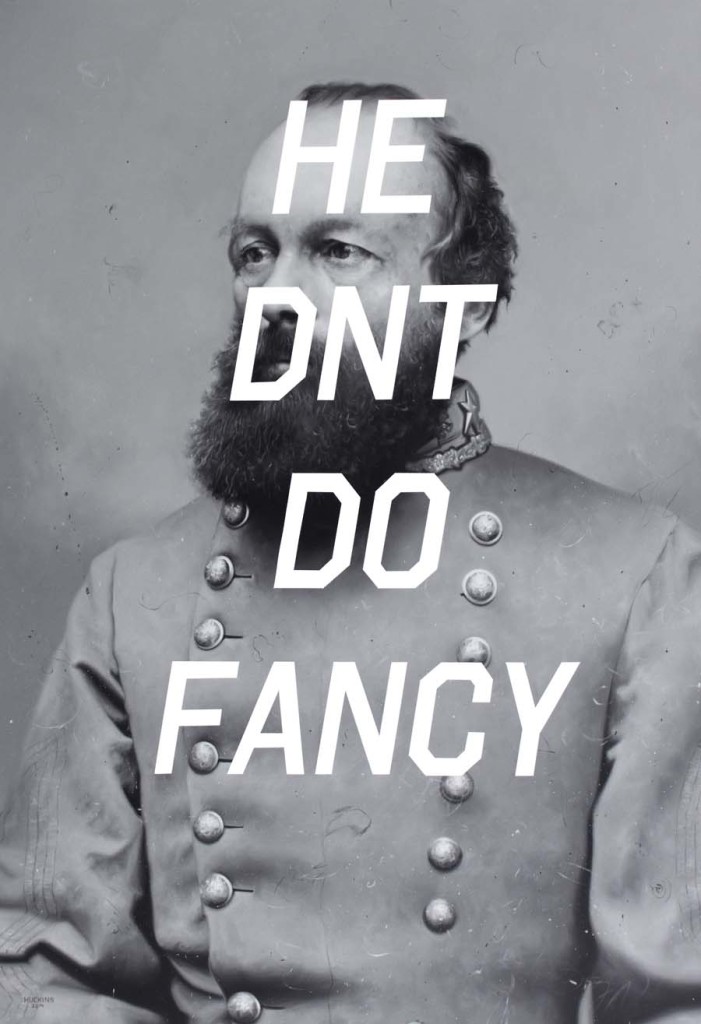 MID: PEOPLE OFTEN THINK YOUR WORK IS EXECUTED VIA COMPUTER. TELL US MORE ABOUT THAT.
Viewers will often do a double take, checking the work to make sure it’s a painting and not a photograph manipulated in Photoshop. It can be hard to tell on the web whether my works are original paintings or digital, so I added a disclaimer on my website noting the hands-on process. 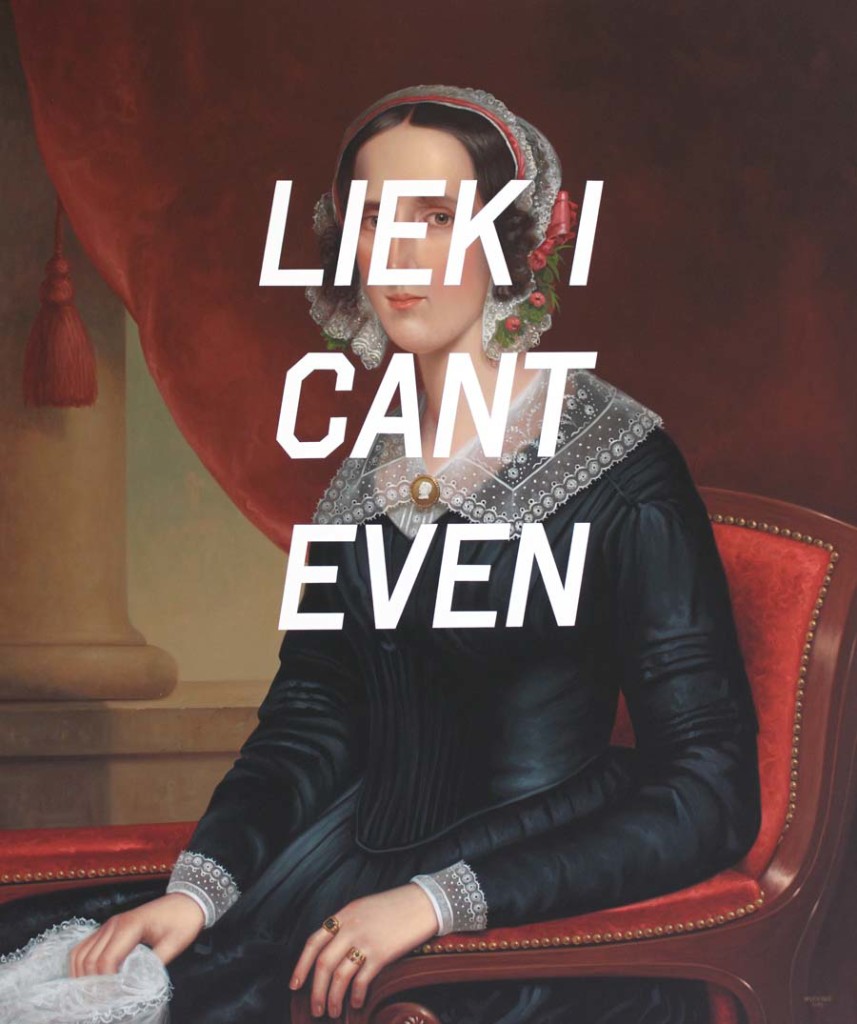 MID: EXPLAIN THE PROCESS OF MATCHING AN ACRONYM TO AN IMAGE.
Researching images and text are two completely separate processes at the beginning stages. I will research images and email museums for the public domain images they retain. On another day, I’ll research texts and phrases. I never use my own texts, as I think it would seem too contrived. Instead, I troll around various social media sites to find the perfect phrase to use. I sometimes edit the phrases to be more recognizable or less crude. Which text I marry with a certain image isn’t exactly science. I pick and choose based on how well they speak with each other. It often has to do with whether the portrait is male or female and their facial expressions. Formal portraits are great and comical, because they aren’t smiling, but have a slight grin. Juxtaposing text such as “WTF” to an 18th or 19th century portrait is just hilarious. 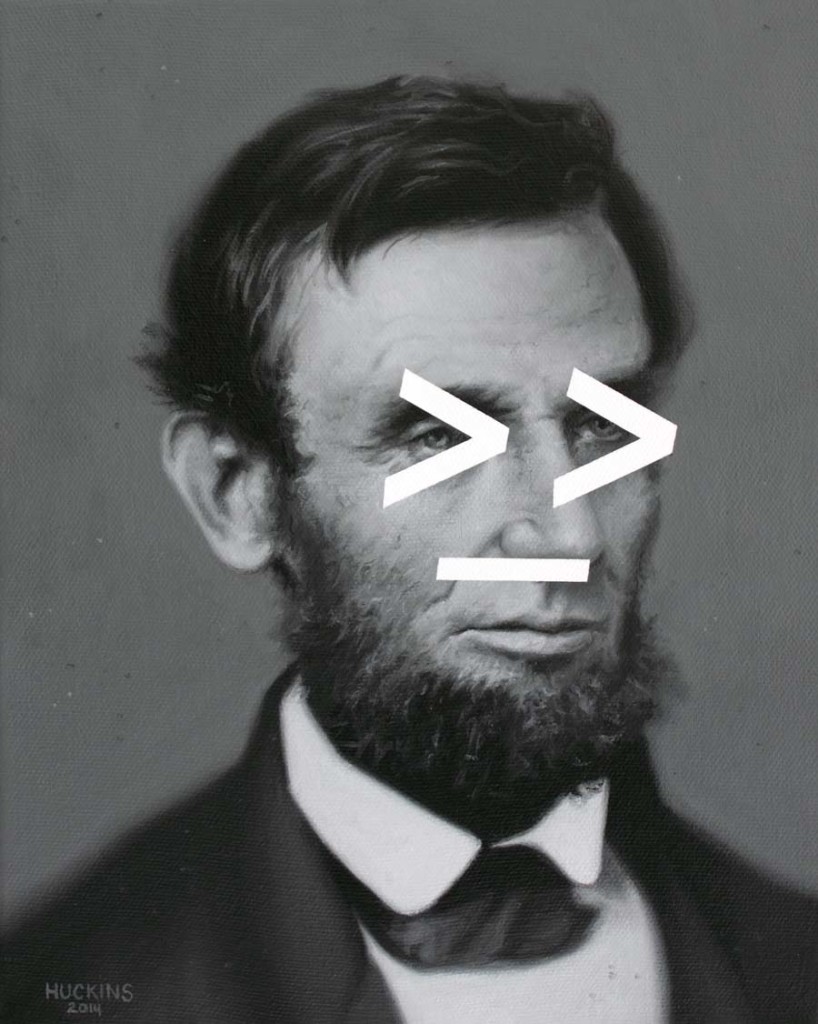 MID: WHY PAINT VERSUS PIXELS?
Painting is a hands-on experience, and I enjoy getting my hands dirty. There’s more satisfaction creating and crafting something with your own two hands versus using the computer. When I was in college, I changed majors several times, because the majority of work was behind a computer (Architecture and Graphic Design). I finally declared myself a Studio Art major and felt right at home. I come from a long line of carpenters and craftsmen; my father and his late father are carpenters, and my other grandfather is a woodworker. I suppose it’s in my blood to work meticulously with my hands. 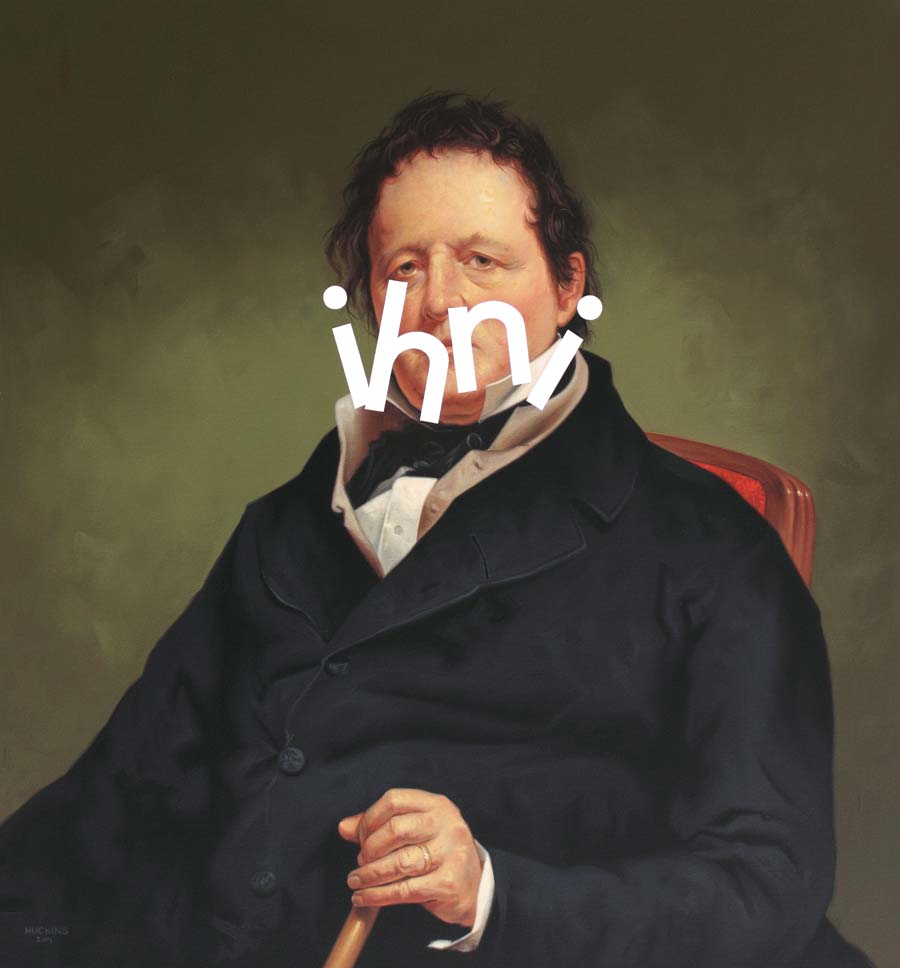 MID: DESCRIBE YOUR EVOLUTION FROM CRAFTSMAN TO FULL-TIME ARTIST.
I earned a degree in Studio Arts in 2006, and immediately upon graduation, I was fortunate enough to have a job. I worked for an architectural firm in Connecticut specializing in model fabrication. This was a high-demanding job with zero tolerance for inaccuracies. If something was wrong, it had to be corrected. This work ethic translated into my working habits at my home studio when I painted at night and on the weekends. Eventually, I got burned out with the firm and accepted a position as an artist’s assistant, which was more relaxed, but I still worked under the stress of a zero-tolerance mindset. I moved to Denver and decided to devote my time to my art career. What I have learned over the last several years are things I can contribute to my success. Being a full-time artist certainly has its ups and downs. There’s a lot of dedication and hard work to follow if you are fortunate enough to work for yourself. I treat this “job” as I do with any other position: I keep regular hours, as well as enjoy my time away from the studio. 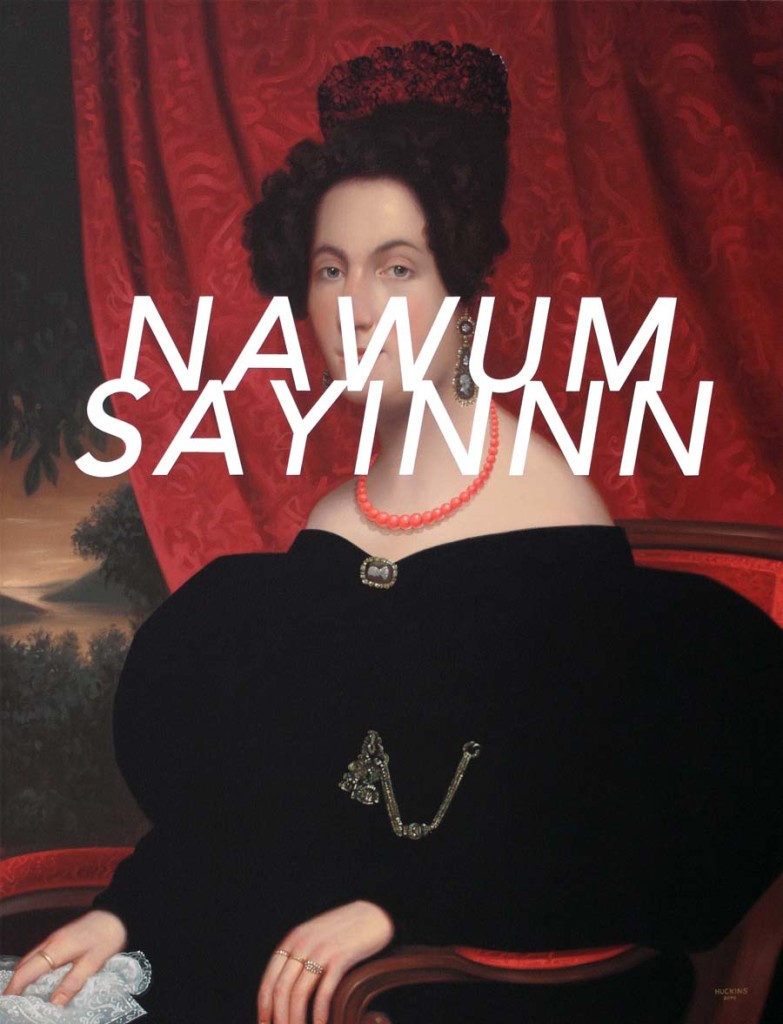 MID: HOW DID YOUR MOVE WEST INSPIRE YOUR LATEST SERIES?
I began The American __tier after my relocation to Denver. Living in an area that was founded by the frontier has definitely inspired this new body of work. In addition to formal portraits, this series incorporates the Rocky Mountains, Native Americans, cowboys, and horses. 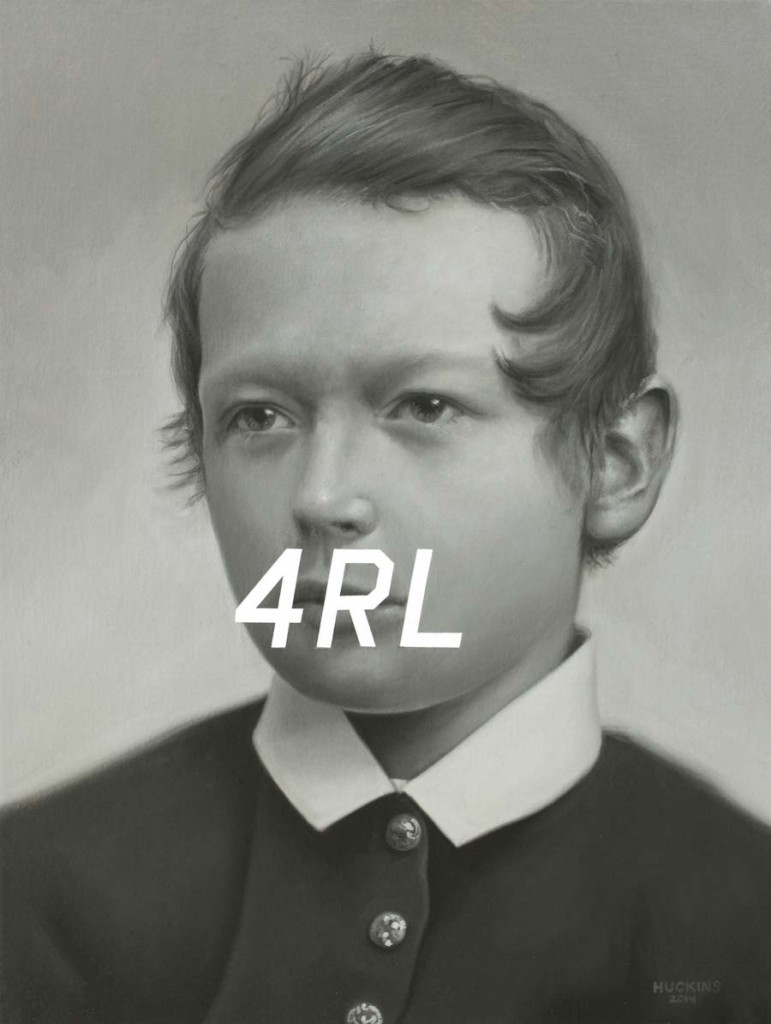 MID: THE JUXTAPOSITION OF PAST AND PRESENT IN YOUR WORK CAN ELICIT SERIOUS THOUGHT ON MODERN-AGE COMMUNICATION. ARE WE WITNESSING A DEPRAVATION OF LANGUAGE?
Depravation may be too harsh of a word. I would say more of an evolution. Some may argue that this evolution is for the worse, as it seems that digital lingo is fast, emotionless, and sometimes unintelligible. But it’s still a valid form of communication. I would agree that modern-day language today has been, in sorts, dumbed down, and it’s hard to intelligently convey a message. Specific examples would be the combination of words such as “bromance” or the shortening of phrases into simple texts, such as TTYL. They are still forms of communication, but can come across as simple-minded and inane. 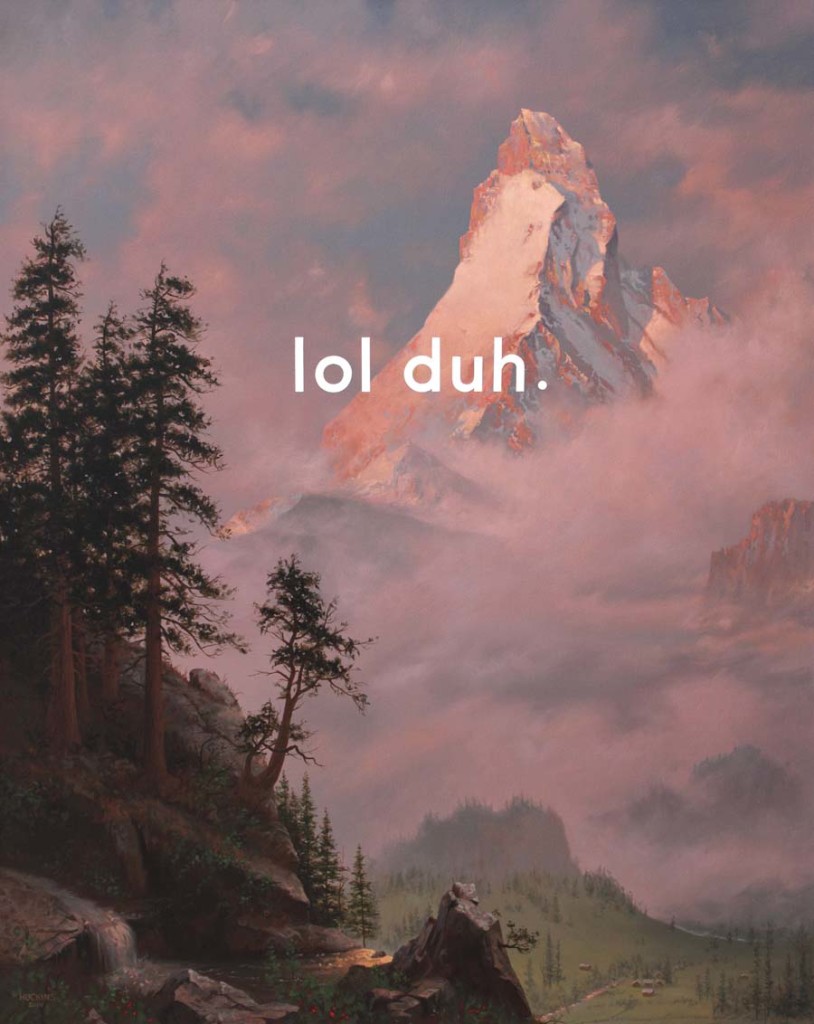 MID: WHAT ROLE DOES HUMOR PLAY IN YOUR SERIES?
Humor is an integral part of my work. I’m a not-so-serious kind of guy, and I don’t want (or need) to evoke deep, dark emotions in my paintings. Contrasting the past and present may conjure up serious conversation, like the evolution of language, but I also want my viewers to smile and possibly laugh. 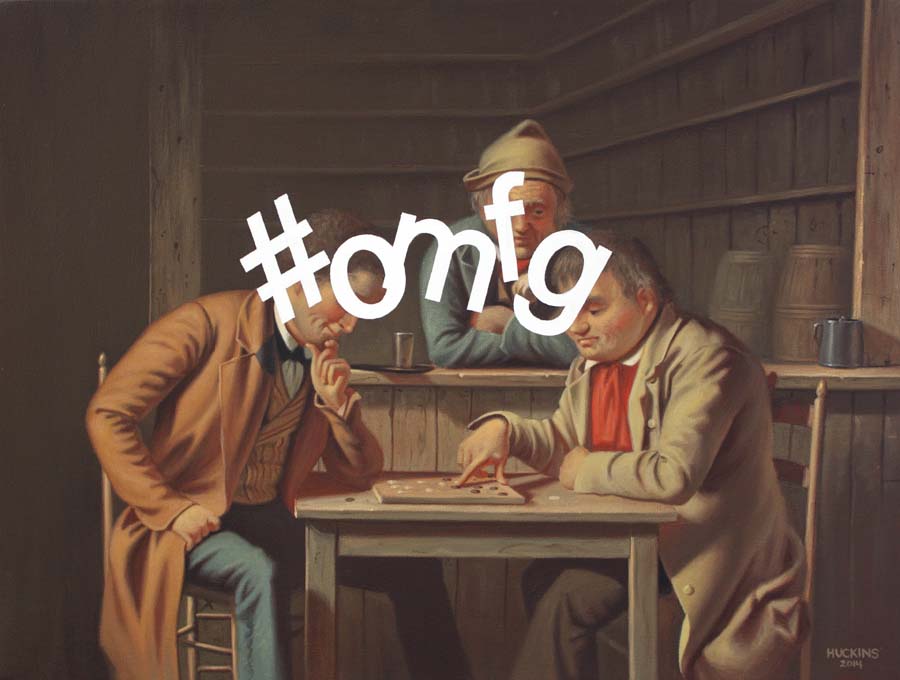