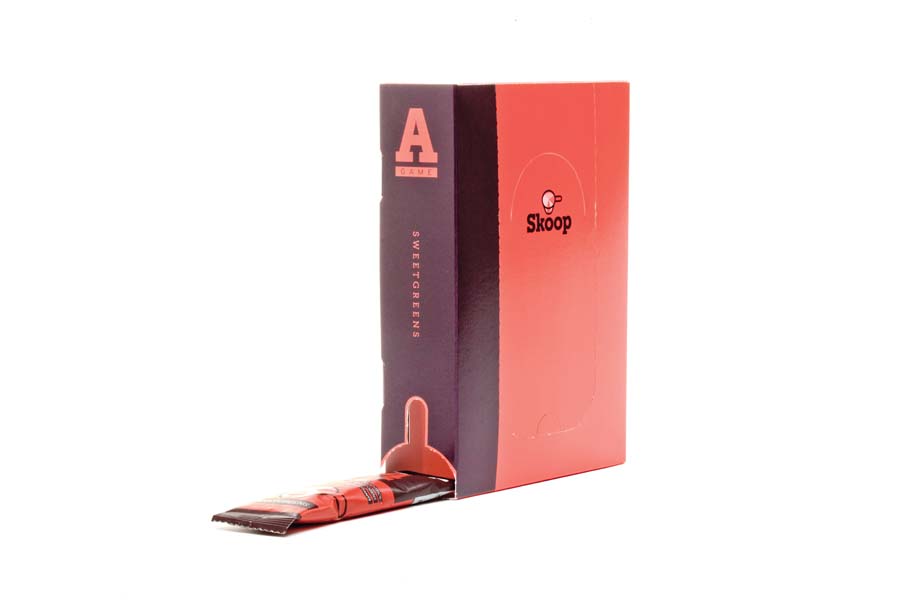 A huge amount of Skoop’s efforts and proceeds are funneled directly into furthering their public health mission. “Skoop is an incredibly uncynical brand/product/company,” said Mike Howard, who helped shape Skoop’s marketing copy. “As a relative outsider, it was cool to see people working to build something they genuinely believe in passionately.” Many companies begin with this kind of motivation or ethos or they tack it on haphazardly later. “But with Skoop, you’ve got all these people working to make sure the product aligns to their ethics from the get-go,” said Howard.

The attention given from every angle of the process is thorough and exacting. From the beginning, they had trouble sourcing products that met their exacting standards. Xanthan gum caused headaches for them. Not from digesting it. From finding what they wanted from it. Due to the process of making xanthan gum, “it’s impossible to certify it as organic. He (Skoop co-founder Alex Bogusky) was worried people wouldn’t understand that, and its existence on the ingredient label, to him, was like an affront to the entire brand,” said Howard.

Co-founders James Rouse, Greg Stroh, and Bogusky have worked to form a relationship with Chef Ann Cooper, known as The Renegade Lunch Lady, who is a crusader for healthier school lunches. Together, Skoop and the Chef Ann Foundation have generated an arrangement so that every single serving of Skoop sold would provide a serving of free, local fresh fruits or vegetables to a public school system in America. Meaning that for every 30-serving bag of Skoop sold, Skoop donates 30 servings of produce.  It’s an impressive arrangement—a true 1-for-1 nutrition company. The schools get the funds through a grant and must not only use the funds for better food, but must also institute educational programs regarding nutrition and health. This is largely possible, because selling direct to consumers reduces the amount of money that is lost through middlemen and regular distribution channels. Skoop, instead of looking to pocket greater profits, instead seeks out how that money can be put to better use. “By going direct to market, we are hoping to be able to use those resources to make big changes,” Bogusky said. Many companies do similar programs for community, devoting a single percent of sales to community, which is nothing to scoff at. But Skoop is doing a full 10 percent, a whopping amount. “It’s a major commitment, but going direct to consumers is what makes it possible.”

There were talks of working to get Skoop powder into the schools but that ultimately is an approach that would have diminishing returns. “Our philosophy is that there is nothing better than people getting real food. Skoop is meant to supplement this. We could put together something to get Skoop into schools, but that isn’t teaching them lifelong healthy habits,” Bogusky explains. Americans tend to confuse the glut of food we have with having something good. “Our children are not expected to live as long as their parents for the first time in history. This is unacceptable. Full stop. Something has to be done about this.”

In thinking about the One-for-One program for school lunches with Chef Ann Cooper, Howard clearly feels a flush of pride shared by everyone at Skoop.  “That was the biggest idea of all. It was a huge differentiator, and one we were all super proud of,” Howard said. “It was the impetus for the new site, and in many ways, it meant Skoop was an entirely new kind of company. So we needed to communicate that, too.

FOR MORE ON SKOOP, CHECK OUT OUR SERIES:

Part 1: Well(ness) Designed
Part 2: Getting the Words Right
Part 3: Saving the Health of our Youth