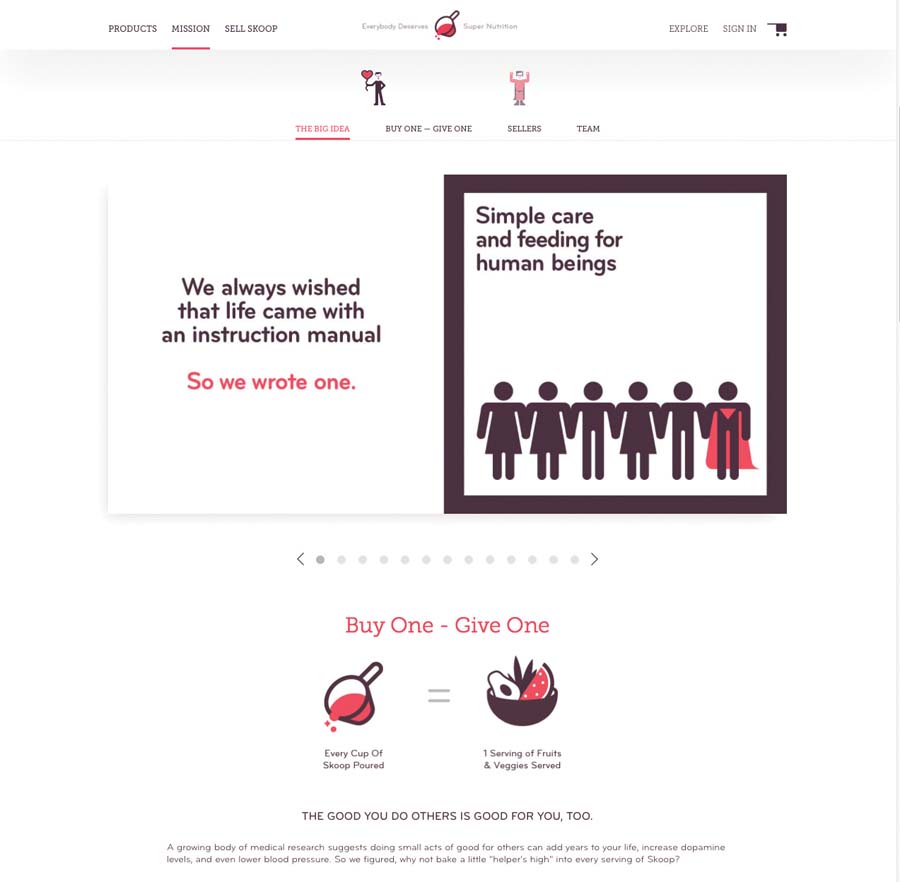 When Mike Howard was told about the Skoop project, he was immediately intrigued. A father with three daughters, he had begun trying a vegetarian diet for their collective health but found it tough. “I wasn’t very good at it. By that I mean, I was going at it but wasn’t extremely well-educated as to how to do it correctly—ensuring I would still be getting what I needed nutritionally,” Howard said. He began as a customer trying to augment what he worried they were lacking.

Skoop co-founderAlex Bogusky knew that would need help getting more content generated and, given their prior history and Howard’s interest in the product, he was the obvious solution. “So, when it came time for a new site and new promotional content, I was super interested in helping out,” Howard added.

The challenges were immediately clear. “There were a few exciting things happening at Skoop all at once, and we needed messaging to communicate those things very simply.” Skoop was introducing two new products to follow up A-GAME: B-STRONG and B-LOVELY. The first is a protein mix called B-STRONG. The goal was to “position this as a protein powder everyone can enjoy, even if you’re not a bodybuilder or a pro athlete. After all, we all have muscles,” Howard said. “So that was basically the brief—the gym has owned protein powder. We want to give protein back to the people.” B-LOVELY is an antioxidant blend including a high concentration of resveratrol, which is reputed to protect skin from sun damage. It is an antioxidant present in red wine, but a person would have to drink 40 glasses a day to gain the protection available in one serving of B-LOVELY. The wine angle and how destructive 40 glasses would be due to wine’s other effects provided the angle for it.

But not every tagline works instantly. “The fuel story could be simplified. It works but getting people to understand phytonutrients in the same way that they understand how electrolytes and Gatorade work is tough,” Bogusky said. “They may not understand all of the science of electrolytes work, but they do understand the necessity of them and that this drink will help replenish those.” There is a strange quirk to telling the phytonutrient story. How do they make the story accessible? The electrolytes were used up and need to be filled back up. Skoop is telling people they do not and maybe have never had phytonutrients. How can you make someone feel that something they have never really had is a necessity?

One solution is tying the idea of a superfood turning one into a superman. Instead of saying that they have always needed them, instead suggest that they have untapped potential inside them that phytonutrients can unleash. “The idea of a superfood, to me, is less interesting than the idea of phytonutrient,” said Bogusky. “I want to move away from that term while keeping the idea of turning a person super.” There is a huge challenge here. How can the product be comprehensible but accurate? Informative but friendly? It’s a difficult challenge but one that they are working on and doing so with aplomb.

“Skoop has a ton of story baked into it. It’s what makes it great,” Howard said. But all of that story and data carried the risk of being intimidating. “It was important to keep Skoop accessible to all kinds of people.  In this category, it’s easy to err tonally and fall into a place that feels too new-agey or hippie, or on the other hand, too scientific.  Either way it might alienate people who won’t identify with that sort of thing.” This care to handle the message right but do so with charm has been the trademark of the Skoop brand and its style of messaging. To be informative, friendly, and a just a touch irreverent. It’s a caustically funny sugar that helps the Skoop go down.

FOR MORE ON SKOOP, CHECK OUT OUR SERIES:

Part 1: Well(ness) Designed
Part 2: Getting the Words Right
Part 3: Saving the Health of our Youth