One hundred eighty-one Russian messengers sit in Denver, not knowing their true origins or fate. These are no ordinary operatives, however. They are unauthenticated avant-garde paintings that have undergone a transformation by way of an unorthodox gallery. Here is the story of some seriously small samizdat. 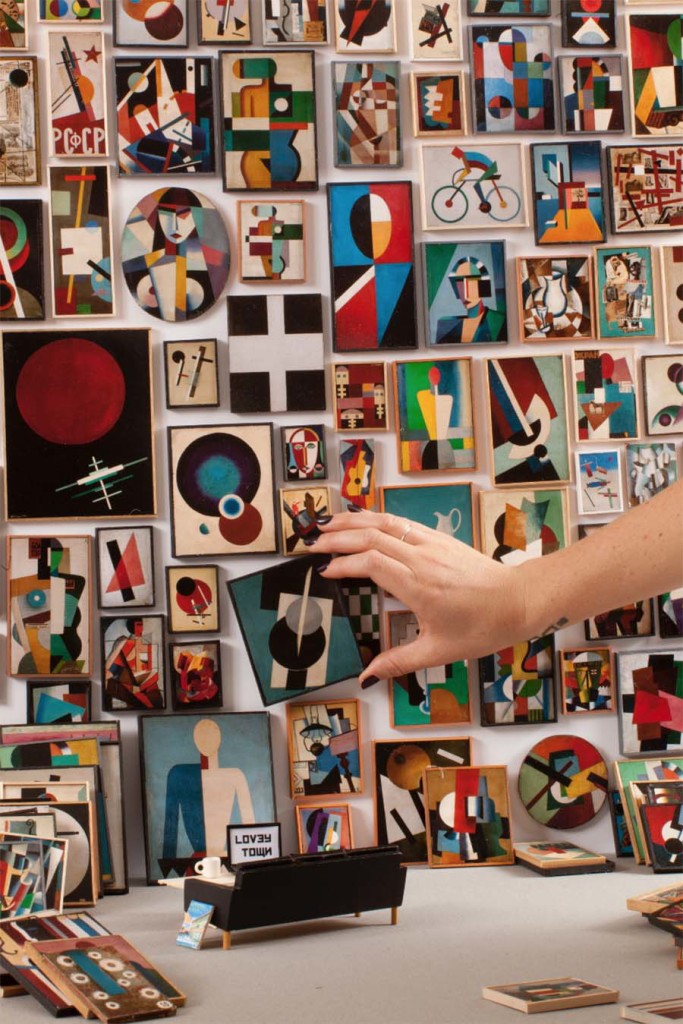 At first glance, the photos resemble any other gallery opening night. Crisp, white walls with pieces neatly hung. Onlookers contemplating the experimental art exhibit. A packed house. Dig a little deeper though, and a slight edge of unreality starts to emerge. The shadow from that woman’s cocktail falls in a peculiar way. That man’s gaze seems to be slightly off into the ether. There are dogs, lots of dogs. 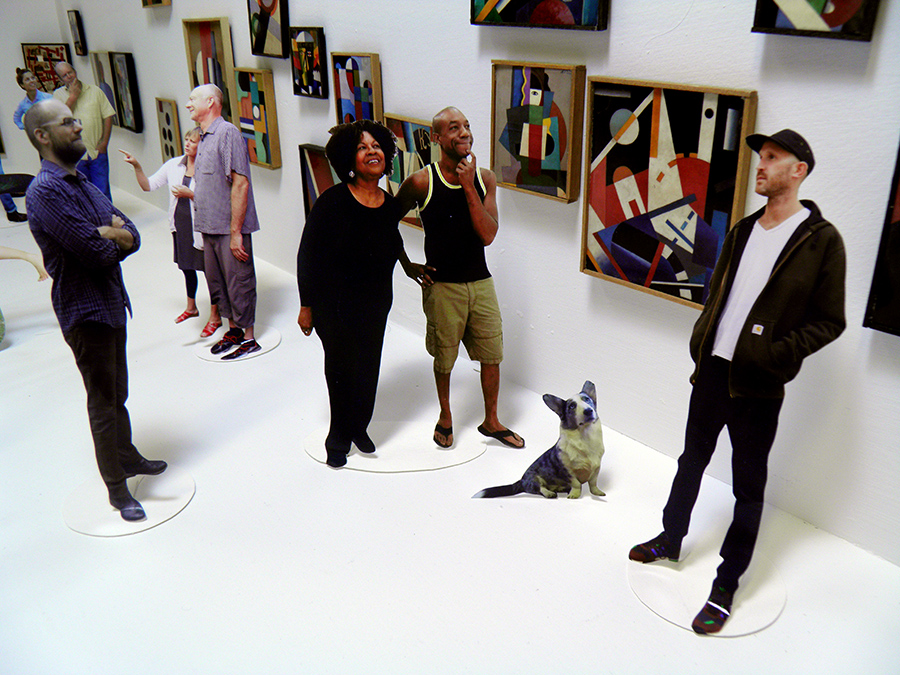 Then it hits you. Everything is tiny: the people, the paintings, the pets. You realize this is not merely a photograph of people at a gallery. This is a photograph of shrunken photographs of people—inside a mini, virtual gallery called Lovey Town. The master works lining the walls still broadcast signals outward, but the channel changes when shrunk down to a 1/16th scale. 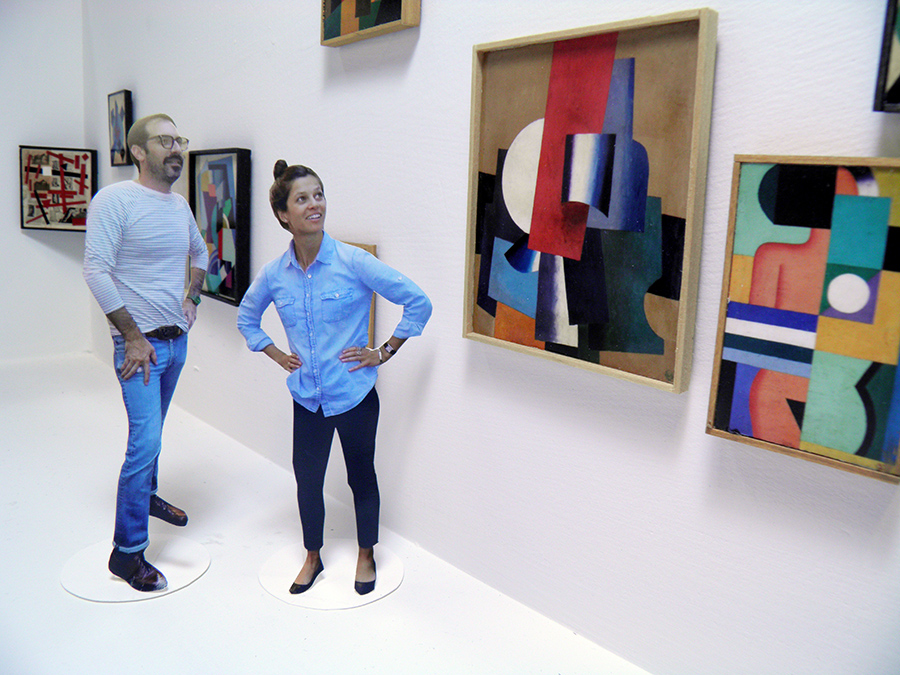 What exactly does authenticity mean, and how does interpretation of that question shape meaning? Those are central questions to the recent “Orphans in the Storm” exhibit at Lovey Town, where attendees “visit” remotely by submitting photos of themselves to be cut out and placed in the small-scale gallery. The concept of Lovey Town is fanciful, and it’s quirky. But behind each miniature exhibit is the story of its original pieces. And in this case, the tale of the “orphans” spans continents, questions politics, and challenges reality. 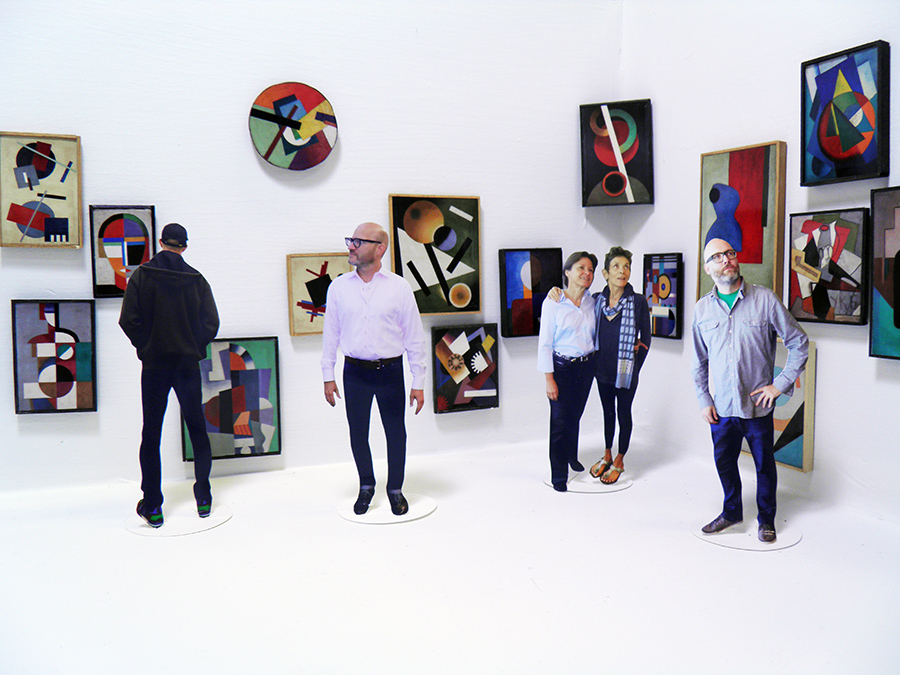 The original 181 unauthenticated Russian avant-garde paintings were the inspiration for a 2010 exhibit at the Museum of Contemporary Art Denver, and the book From Russia With Doubt: The Quest to Authenticate 181 Would-Be Masterpieces of the Russian Avant-Garde by the MCA’s Adam Lerner. The collection is one acquired by Denver-based photographer Ron Pollard. “They’re radical paintings for the time,” he said, “but after they’ve been processed and absorbed into culture, they become artifacts and lose some of the spirituality because they’ve been objectified.” 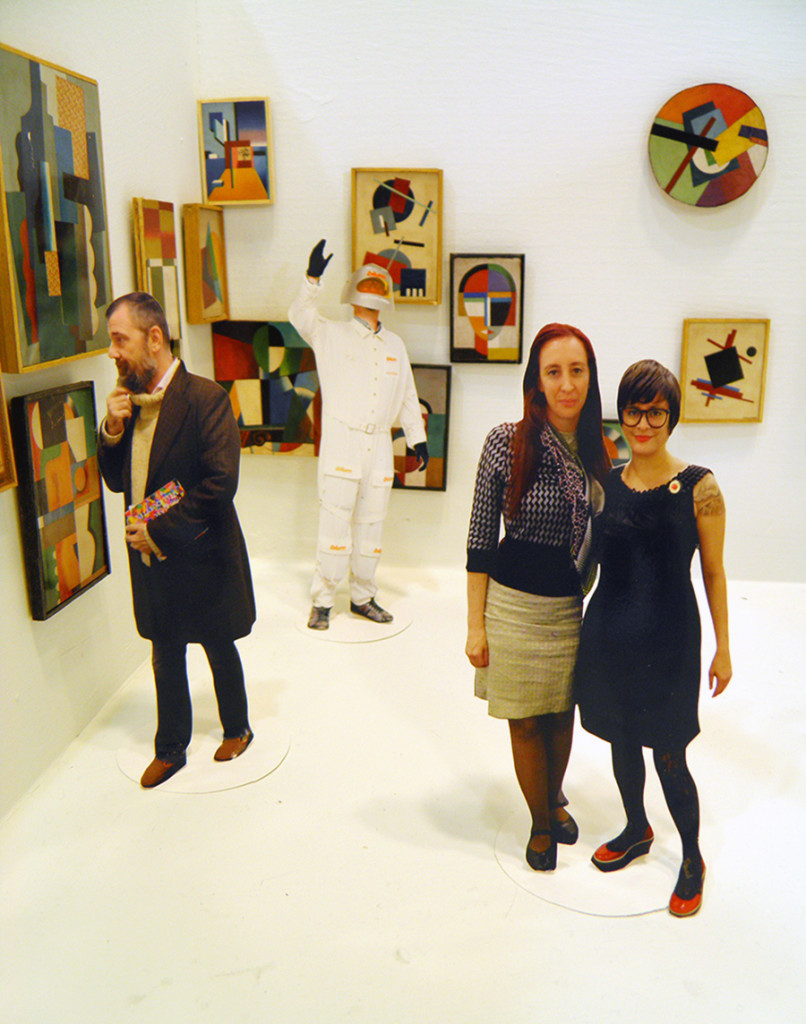 Many of the full-size pieces have undergone forensic examination and expert appraisals, and are believed to be authentic masterpieces created by famed Russian artists. Yet they lack the final stamp of approval, likely due to the cultural and political ramifications associated with their context. Thus, the paintings here in Denver sit in limbo, and as “…orphans in the storm, are ready to be adopted, nurtured, and groomed to the needs of any astonishing new circumstance.” That quote from Dave Hickey’s Pirates and Farmers is where the current Lovey Town exhibit gets its name. 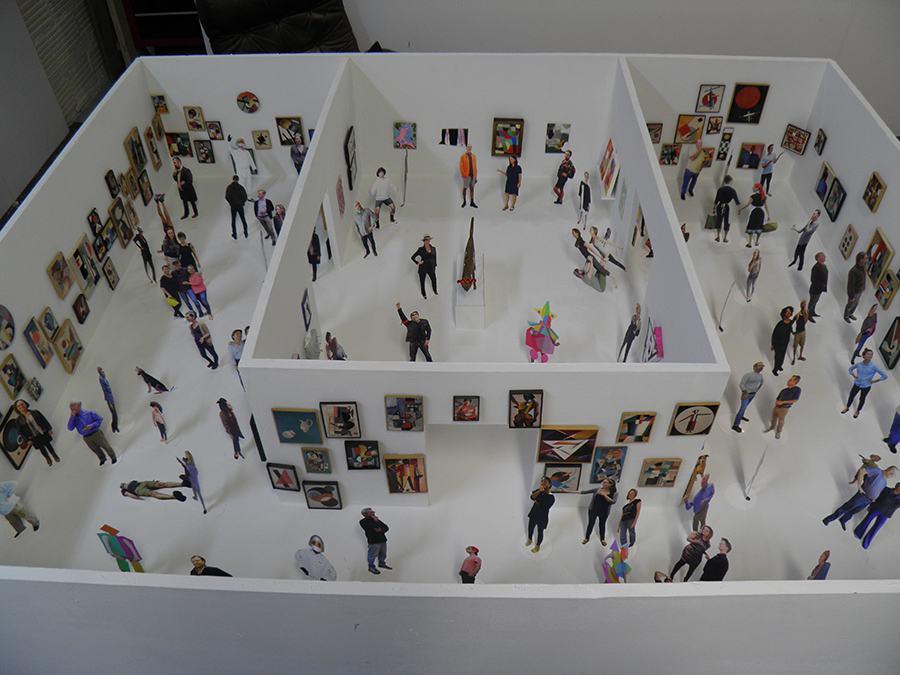 The virtual gallery physically exists as a 48x60x12-inch independent exhibition in Michael Velliquette’s Madison, Wisconsin studio space, running into its second year. With a brick-and-mortar background, Velliquette started Lovey Town as a logistical practicality to stay connected with a creative diaspora and recreate a fantastical version of the gallery viewing experience. “There’s something about these incredible little objects that tickle the brain,” said Pollard. “In the spirit of the original paintings, it brings it into life—back into a human place. By making it meta, the pieces become closer to what they originally were.” 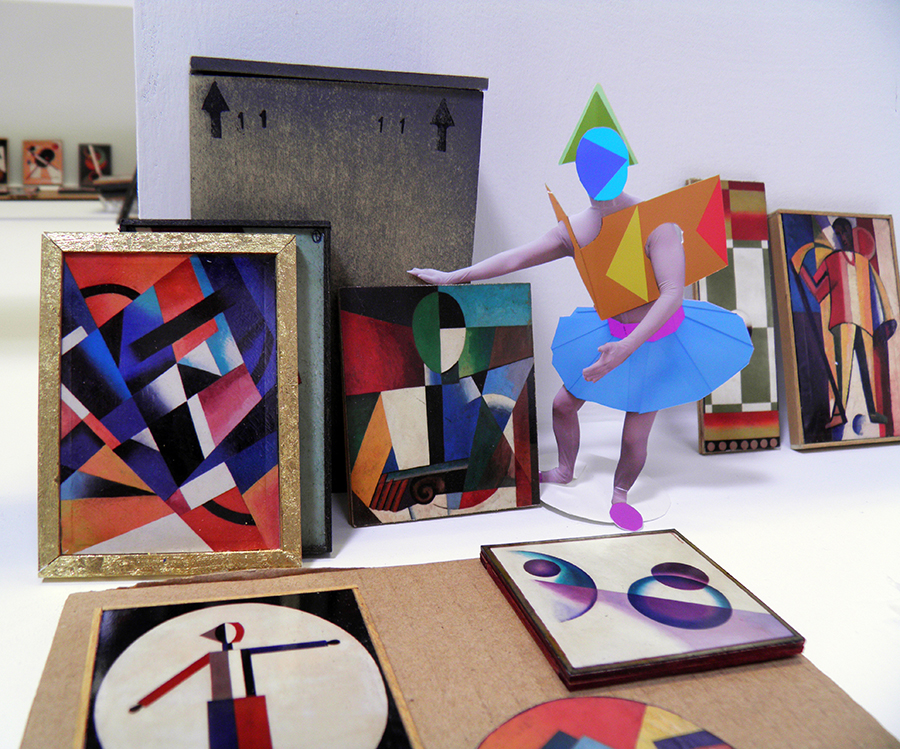 Pollard reached out to Velliquette after hearing a short snippet about the project via a podcast he happened to hear—a tiny needle in a tiny haystack. By collaborating and breaking the fourth wall, the mini-masters breathe new life into the purgatorial pictures, and relish in the surrealism of the small. “Ron’s works were a good fit for Lovey Town, because there’s an absurdity to it,” said Velliquette. “There’s controversy—also how beautiful it is and Ron’s sincerity. It’s amazing to think that he was as crazy as I was!” 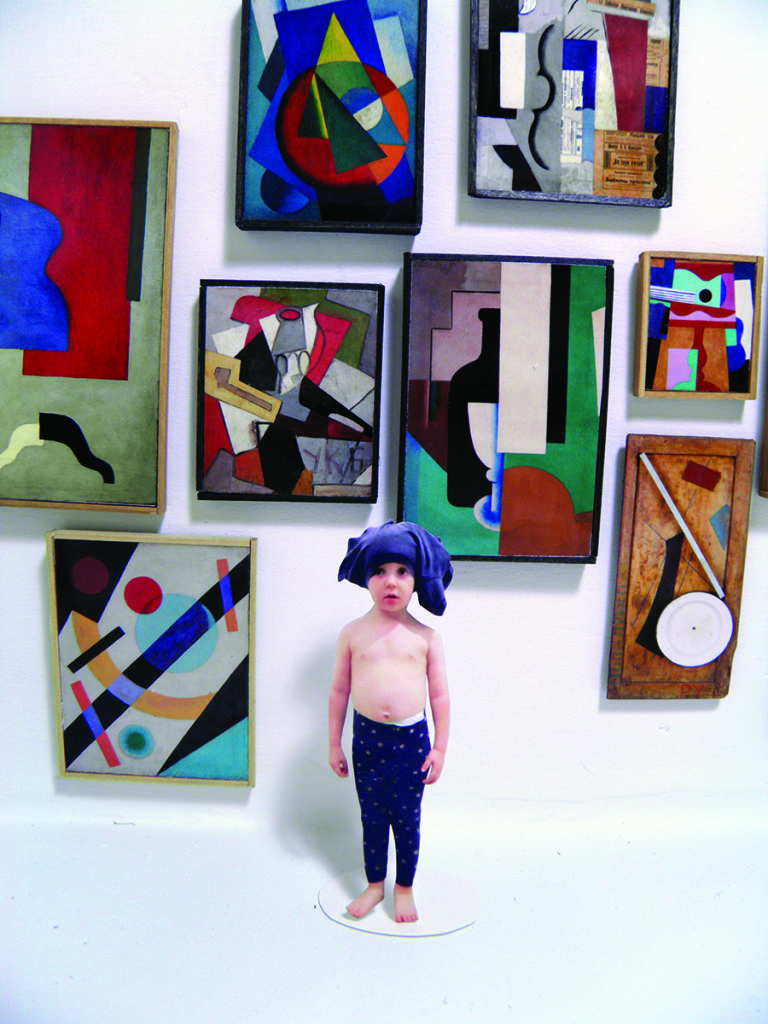 That sincere craziness—or as Velliquette puts it, serious playfulness, an experience that reveals itself upon closer reflection—is a question of what it matters to be real. The result is playful subversion: a space that exists simultaneously nowhere and everywhere. Familiar and new. Simulacra and stimulation in the passing storm. 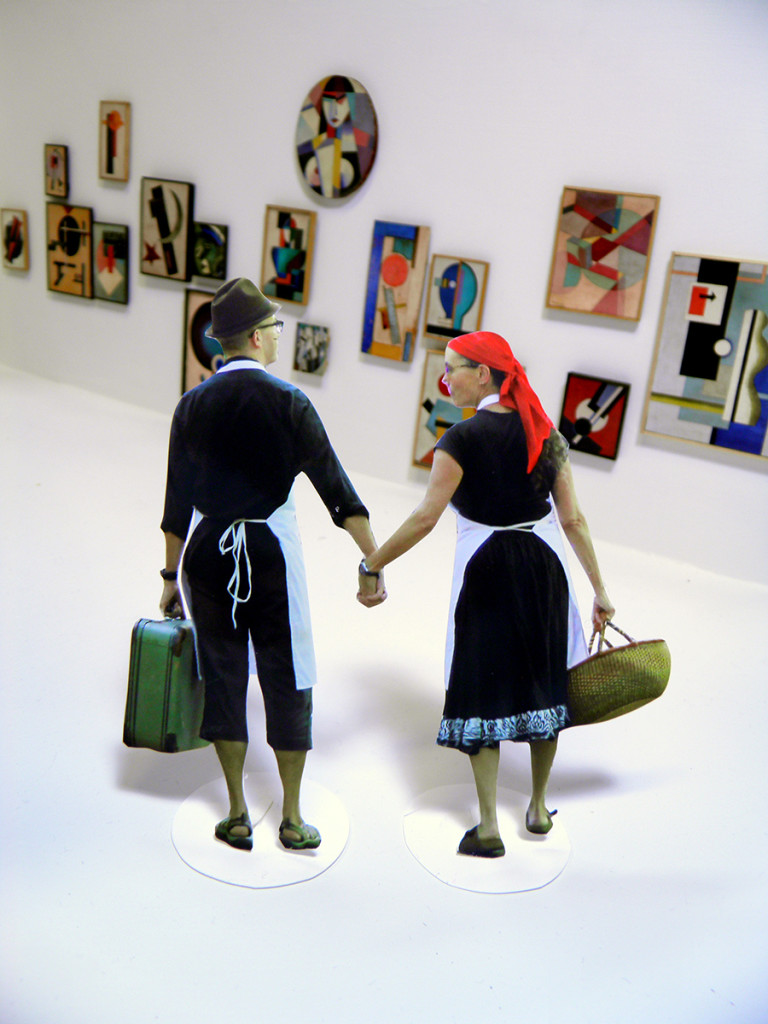 THE VISITING PROCESS
Attendees submit their photos via text or email to Velliquette, who prints, cuts out, and places them into the bitty exhibit where they’re photographed and uploaded to the gallery website. Visit Lovey Town yourself and see the Russian paintings in more detail.