WHEN THE FRYS LOST THEIR HOME TO THE FOURMILE CANYON FIRE,
THEY LOOKED UP—WAY UP. REBUILDING AT 7,300 FEET HIGH,
THE FAMILY SOUGHT A FRIEND TO REBUILD THEM
A FIRE-PROOF AND EARTH-FRIENDLY FORTRESS. 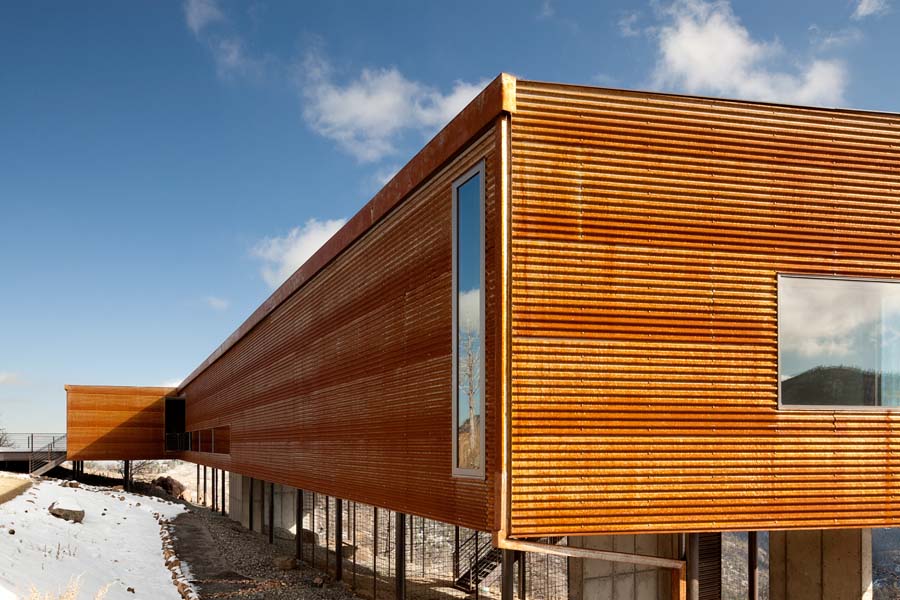 The first time Evan Fry stepped onto the property, he could still smell smoke leftover from the Fourmile Canyon fire four months earlier. He saw charred pine-tree skeletons and fields blackened like a Cajun-dinner special. There was no sign of life. Not a hint of green.

Except in the view. Oh, the view. Sunshine Canyon to the south, Sugarloaf Mountain on the west, and the Flatirons to the east. Evan had found his new home, just a mile as the crow flies from where the same wildfire that ravaged the Boulder hillside on Labor Day 2010 burned down his first home. “I actually thought it was beautiful charred. It’s so graphic. So simple. Everything one color,” said Evan, who other than clearing dead brush to meet fire codes, left the landscape as is. “What it looks out on wasn’t burned. Plus, I like the idea of regeneration and letting it regrow.” 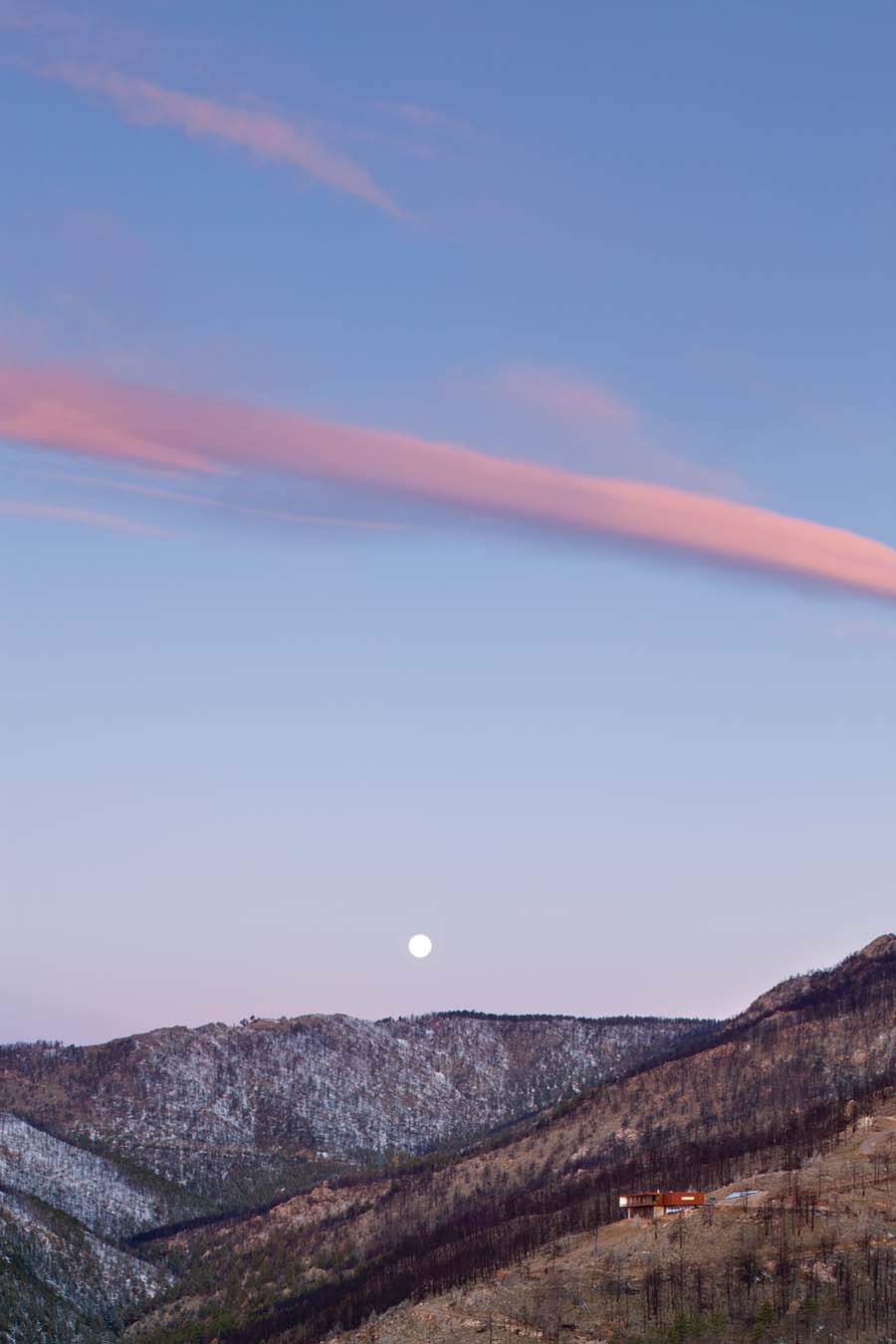 It would take three years of regrowth, building delays, and a marriage before he and wife, Melissa Fry, moved into their new home on Labor Day last year. The two shared an appreciation of modern design and letting nature return at its own pace. Having lost everything in the fire—two weeks after Melissa had moved in—they trusted Corey Martin to design a modern home to better withstand the elements. “It’s elevated off the ground and nothing is living underneath it, just rock, so it’s designed to not be flammable,” said Martin, Design Principal at THA Architecture Inc. in Portland. “…And when last year’s flood happened, the water ran down into the canyons below.” 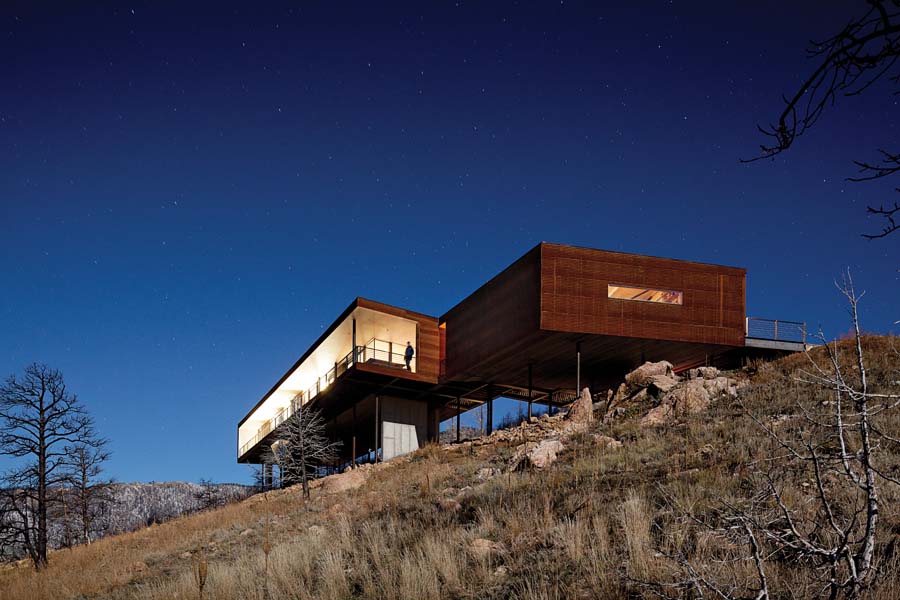 The house—which they call the Good Ship, because it appears to float—sits perched on a slope, like a golden eagle at rest. At 7,300-foot elevation, it’s higher than their last house. Floor-to-ceiling windows face south and offer views most only see in magazines. In fact, the house was positioned to get awe-inspiring views on all sides except one: the north, which faces the driveway, gravel road, and neighboring homes. 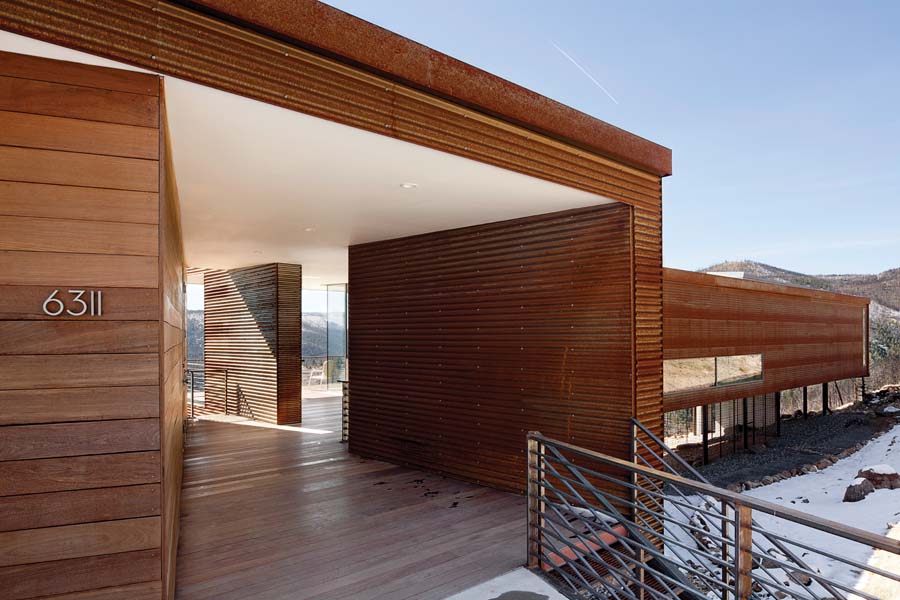 The low-maintenance home reflects the hillside, stripped to the essentials. The Ipe hardwood deck will gray overtime. The standard corrugated steel siding already has a nice patina, matching the rusted steel mining structures near the property. Underneath, there’s an unobtrusive fenced-in dog run to keep their terrier mixes George and Donnie safe from mountain lions. “My whole reason for living is to design things, whether it’s buildings or other things, that accentuate the connection to the landscape,” said Martin, who traveled at least 10 times over three years to the site. “To be able to work in the landscape and see the erosion and growth over time was a super opportunity.” 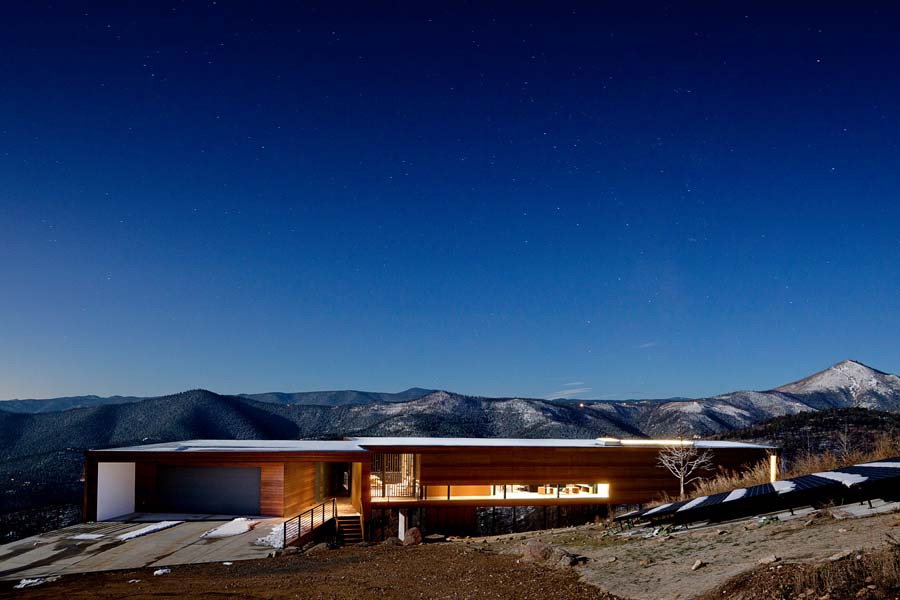 While Evan shares Martin’s philosophy, that wasn’t the main reason Martin got the job. Good friends since the University of Oregon, they continue to go on extreme vacations each year—“Not just normal ones, but ones that are really stupid,” said Martin, like the insane Selkirk Mountain Experience where Evan nearly slipped off a 3,000-foot cliff. Martin was the only architect Evan considered for the job. “I had never considered doing a home from scratch,” said Evan, who works as Crispin, Porter + Bogusky’s Executive Director of Creative Development. “After I lost my home, he [Martin] said, ‘Look, if you’re looking to rebuild, I want to design your home.’”

Evan, who loves mountain biking, would take Martin and the bikes on day trips to scout out the 8-acre property. Of course, it didn’t hurt that Martin was a partner at an award-winning architecture firm, with a modern bent and appreciation for sustainable design. 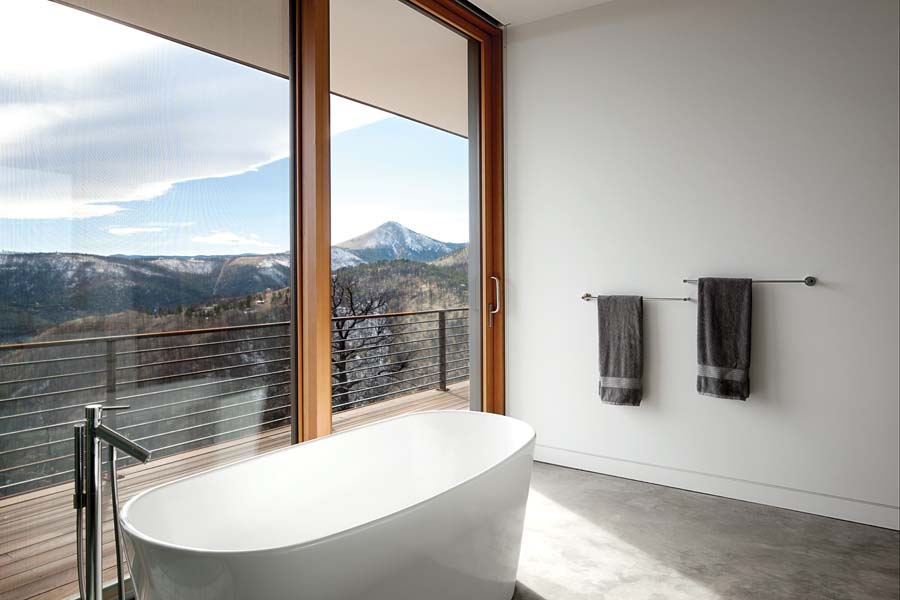 Still, the process took longer than expected. Well into the project, the builder doubled his price after realizing that constructing a two-story structure into a slope and hauling materials on a dirt road wasn’t normal. But the two didn’t give up. Within a few days of losing the builder, Martin returned with a simplified plan, about half the size of the original. “Corey liked it more than the original design, and I think I do, too. It’s less opulent. More forward thinking,” Evan said. Martin got rid of a floor and minimized the foundation, which is now anchored into several steel columns drilled deep into the granite. Floating the house next to slope also made it easier and less expensive to build.

The Frys splurged on the wall of windows. But the exorbitant price came partly from windows able to withstand winds up to 135 mph. Winds are so strong that you hear them howl even with everything shut tight. But the main reason for the windows was, of course, the view. “There is so much view with the windows that we didn’t feel like we had to do much interior decorating,” said Melissa, an Ashtanga yoga instructor at the Yoga Workshop. Losing everything in the fire, they furnished the home with objects acquired during the transition. “We were so happy with the view that we didn’t want anything to interfere with it,” she said. 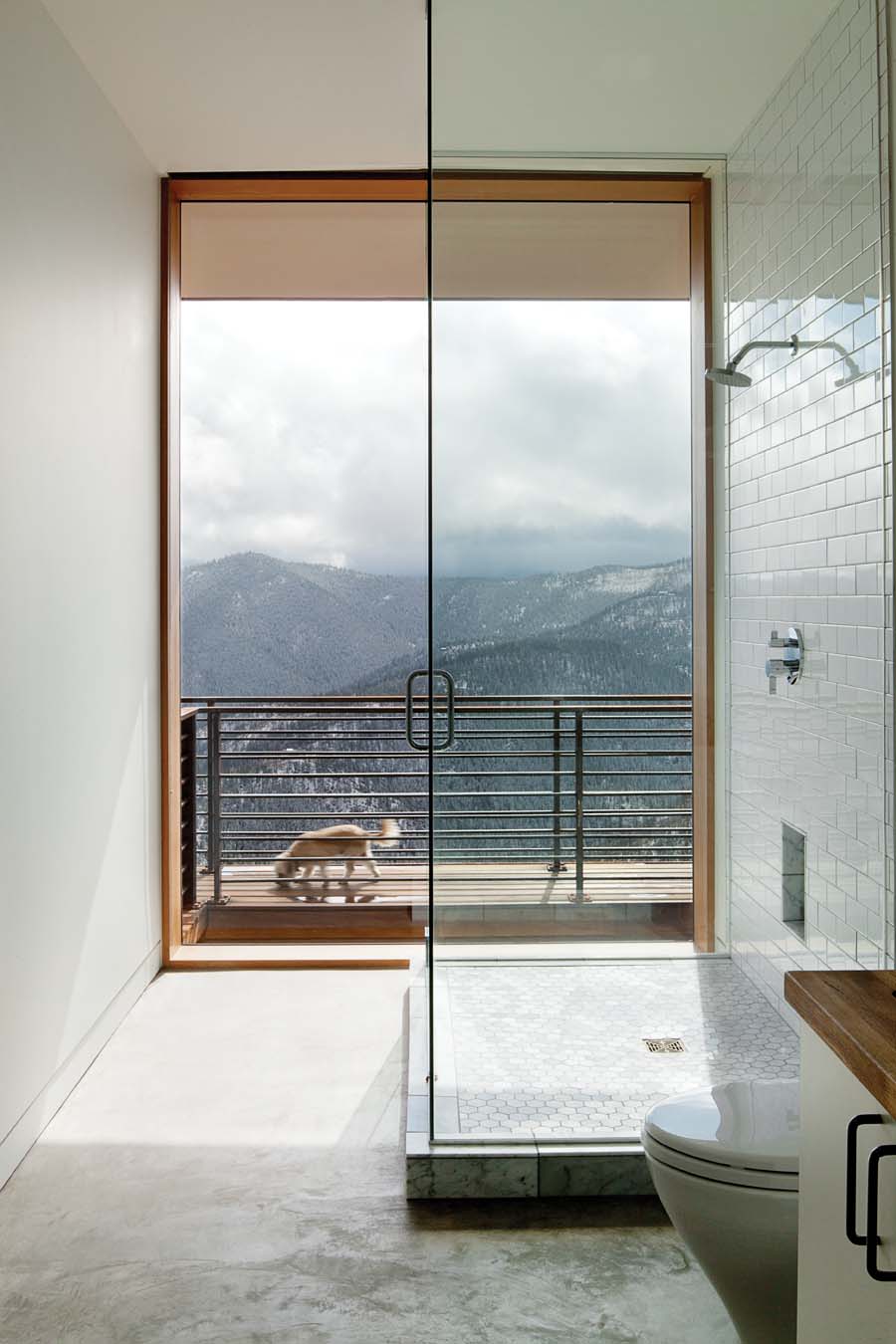 And like all good Boulderites, the Frys built energy efficiency into the house. Geothermal heating and cooling uses the earth to keep the home’s temperature comfortable. The home is insulated tight with foam, and the floors have radiant heat, while windows provide cross-ventilation when it gets too warm. An array of photovoltaic solar panels outside provides energy for the house and feeds what they don’t use into Xcel’s grid. Integrating passive solar design, the roof’s overhang blocks direct sun from hitting the windows in summer, while heating up the concrete floors in winter. “What I didn’t want was a propane tank next to the house. A lot of these mountain homes, you have to have mountain gas. But do I have to? It felt really weird to me to have fossil fuels trucked in,” Evan said. The geothermal and photovoltaic solar provide most of the energy throughout the year. From June to September, they haven’t had an electric bill, and they are 100 percent electric. 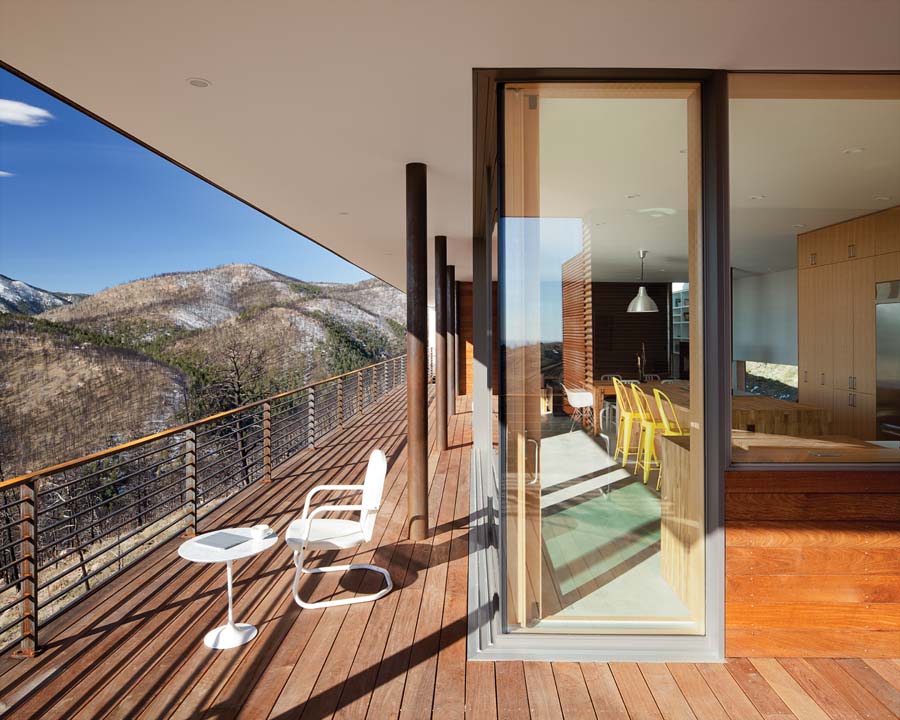 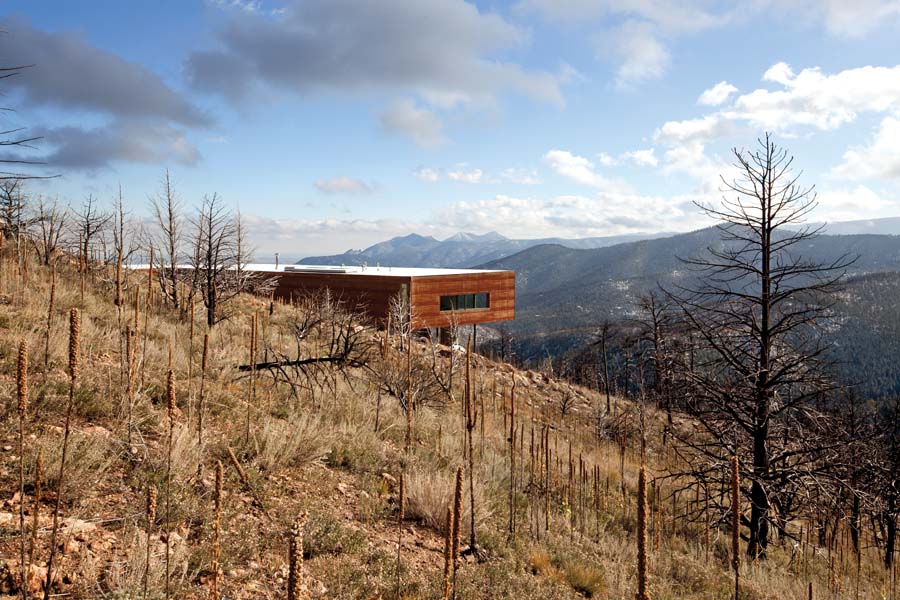 The expansive views make the house seem deceptively remote, but the house is less than 10 miles to downtown Boulder, a 15-minute drive in good traffic. The athletic couple works hard during the week, and when it comes to winding down, the first thought is home. “I just love being home,” Evan said. “And I live right where I want to be.”