In our winter issue, we profiled NINE dot ARTS, curators of the nearly 600 pieces of art decorating The Crawford Hotel and Union Station. You can read the story below or click the image to view the PDF. And when you’re done reading, play the Nine Dots game, from which NINE dot ARTS gained inspiration!

Amid the bustle of Denver’s newly redeveloped Union Station, The Crawford Hotel brings a uniquely modern flavor to a property best known for its history. Getting everything in its right place took plenty of time, resources, and collaboration. For the curators at NINE dot ARTS, placing nearly 600 works of art was only the beginning.

Spend a few minutes wandering the halls of Denver Union Station and you’re bound to be struck not just by the dramatic ceilings or the eclectic eateries, but also by the art—not the safe, blend-into-the-scenery pastels that frequently clutter the walls of public spaces, but actual art. Challenging pieces that grab your attention and start conversations. 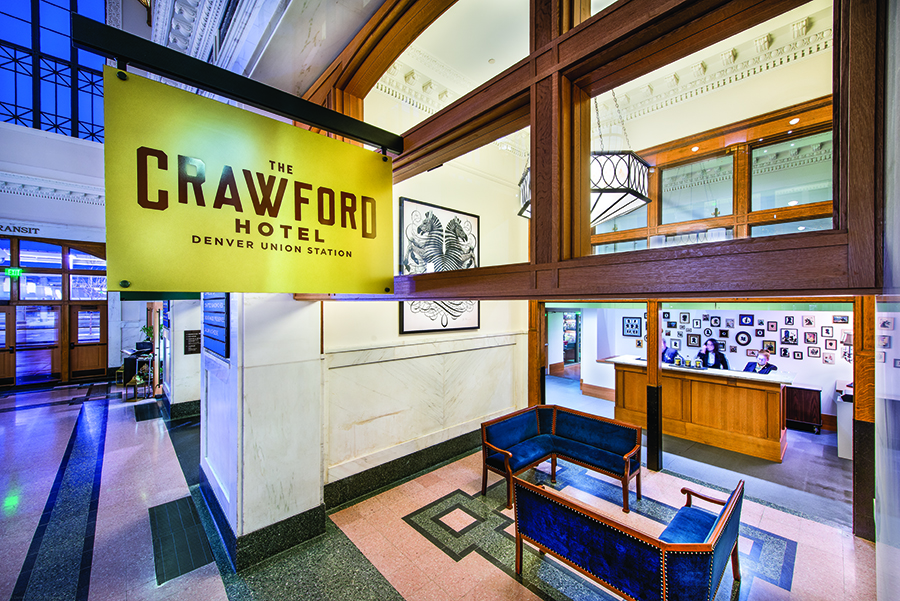 This isn’t mere good fortune, and it isn’t an accident. The 589 pieces that populate the Union Station collection were hand-picked over the course of more than six months under the guidance of NINE dot ARTS, a curating and consultancy outfit headquartered in Denver’s up-and-coming RiNo district. Taken together, the collection brings warmth and vitality to one of the city’s most historic landmarks. “In a sense, what we were doing was reacting to the origins of the building,” said Dana Crawford, the woman behind the redevelopment of Larimer Square in the 1960s and The Oxford Hotel in the 1980s. Crawford is a primary force behind the Union Station redevelopment and the namesake of the building’s crown jewel, The Crawford Hotel. “It was sort of like a little vacation to go over there and get involved with the art that is going to be a part of this great effort of bringing this building back to life. It redefines Denver in a very big way.”

A project of this size and scope required partners who were equal to the task. Crawford’s Urban Neighborhoods, Inc., worked in tandem with Walter Isenberg’s Sage Hospitality (developers of The Curtis Hotel and The JW Marriott, among others), and with local firms Larimer Associates and McWhinney. The result is a luxurious 112-room hotel that pulls off a delicate balancing act, embracing the property’s rich history while also flashing a fresh, modern atmosphere. 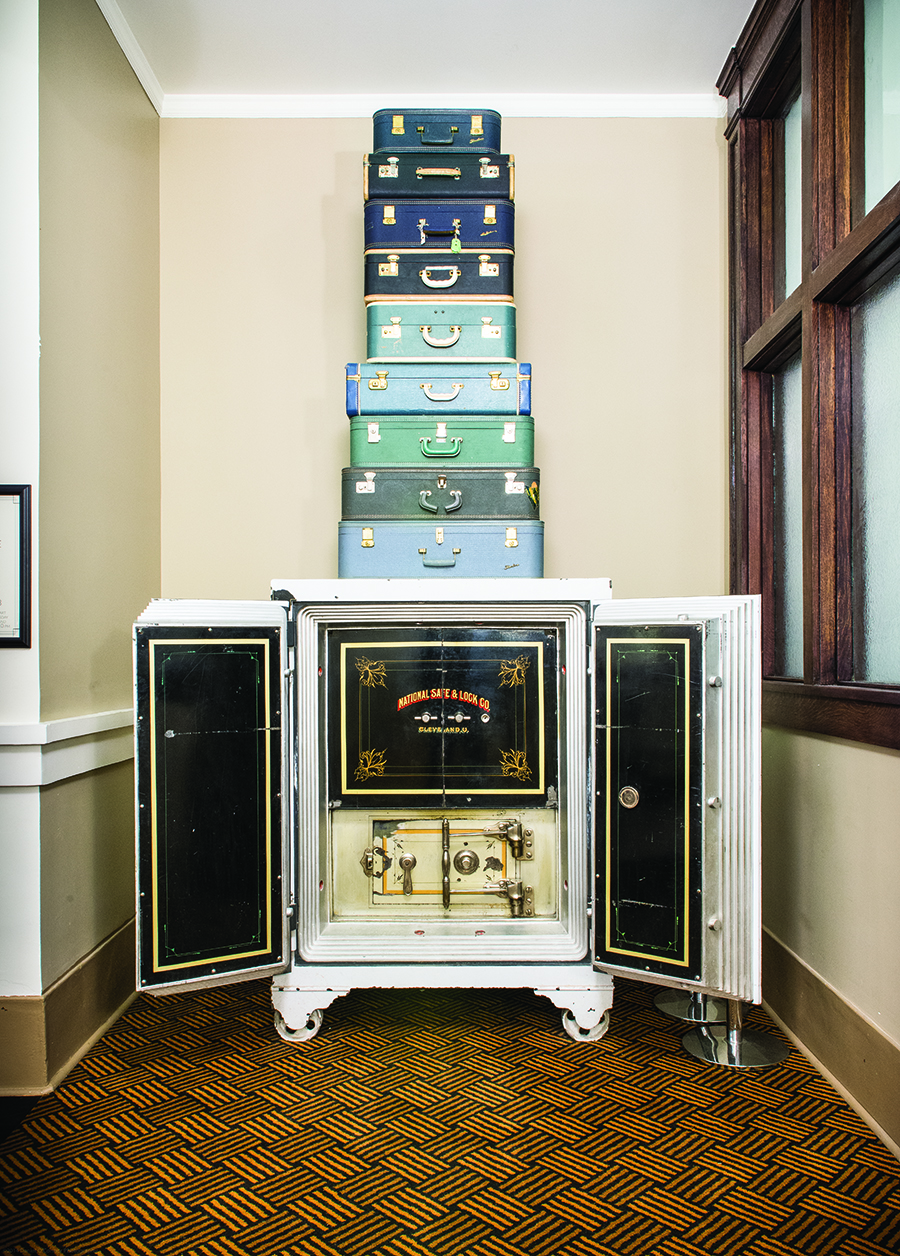 From room to room, from one floor to the next, The Crawford’s personality bends and shifts, setting expectations in one hallway only to defy them in another. Famous works by well-known artists hang alongside unknown works by undiscovered artists. Authentic transit scrolls and original blueprints from the early 1900s offset a giant silver leaf mural. Found objects from inside the benches of Union Station’s Great Hall offer a playful counter to the vast array of more traditional prints and canvases.

Despite all this diversity, there’s a common theme that emerges as you move from the main floor lobby to the top-floor guest rooms. Whether it’s Jake Weidmann’s “Indivisible” at the concierge desk, Bob Benevenuto’s “Hide and Seek” in the third floor north wing, or Mai Wyn Schantz’s “Seneca Deer” in the fourth floor lofts, many of the pieces are notable for their ability to marry the old with the new. Again and again, guests are met with classic Western iconography reinterpreted through a distinctly modern lens. Which, when you get right down to it, is an apt way to describe The Crawford Hotel, the entire Union Station redevelopment project, and the city it now anchors.

More than creative expression or personal experience, art has become something of a litmus test for the evolutionary path of American cities. When gauging a city’s cultural stock, visitors tend to consider the quality of local restaurants, the abundance of music and theatre opportunities, and, increasingly, the depth and breadth of the art and architecture scenes. Judged against those criteria, Denver is an ascending city, and one that continues to attract a wide array of burgeoning talent. None of which was lost on Crawford. “We wanted the spotlight to be on Colorado artists,” she said. “We wanted to get humor into it, and we wanted to bring a sense of the appreciation for the evolution of art in Colorado.” 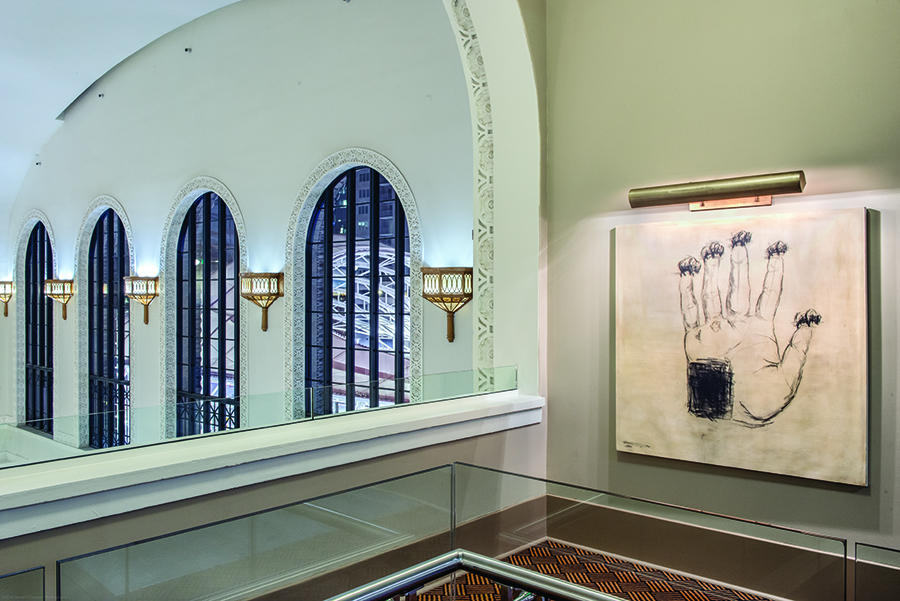 For help designing this high-profile property, Crawford and Isenberg turned to Tryba Architects and JG Johnson Architects. When they needed help with interior design for the Great Hall and the Terminal Bar, they turned to New York City-based AvroKO Designs LLC. And when it came time to dress up the place and give it a heartbeat, they turned to NINE dot ARTS, a rapidly-growing company that curates collections of all sizes for hotels, health care facilities, and even public art projects. Whereas a gallery owner works directly on behalf of the artist, NINE dot ARTS approaches public art from a different angle, bridging the often-substantial gap between a stark commercial environment and an engaging, enriching experience.

Here in Denver, NINE dot ARTS also presides over a growing roster of projects large and small. Their handiwork can be seen at the Colorado Convention Center and the Gates Family Foundation. At any given time, their nine-person team is at work on several dozen commercial projects, each uniquely tailored to meet the client’s vision. “The whole point is never to curate the same collection twice,” said Weidmann.

That need to provide a novel experience for each project is hinted at in the company’s name. NINE dot ARTS refers to a famous puzzle consisting of three equal rows of three dots. The challenge is to connect all nine dots using no more than four straight lines, without lifting the pen and without tracing over the same line more than once. The exercise has been stumping people for at least a century, but the solution turns out to be both simple and profound. Solving a problem like this requires lateral thinking—or, to put a finer point on it, thinking (quite literally) outside the box.

Weidmann and Casey took that concept and developed a proprietary nine-step process, from extensive pre-planning all the way through post-project sustainability, which helps clients define their goals and create a fully integrated experience. This structured approach allows for great attention to detail while simultaneously serving the bigger picture. When all is said and done, the art on the walls isn’t there for decoration. It’s part of the brand.

Redeveloping a historic property like Union Station requires scientific mastery, business acumen, and the seamless coordination of countless people over long periods of intense work. But it also requires an artist’s eye for detail and a gift for breathing new life into old spaces. After all, it isn’t enough to build the thing or to spruce it up with art that camouflages itself, chameleon-like, into the background.

A place like this, which houses not only the spirit of the past, but also a passport into the future, must have its own voice. The murals, the blueprints, and the paintings should speak to visitors—and just as importantly, those pieces should move the visitors to speak back. In the words of Weidmann: “If it disappears, what’s the point? Better to leave it blank.”