On the surface it’s a children’s story, but a closer look reveals that Andrew Henry’s Meadow is a manifesto for the creation of modern spaces. 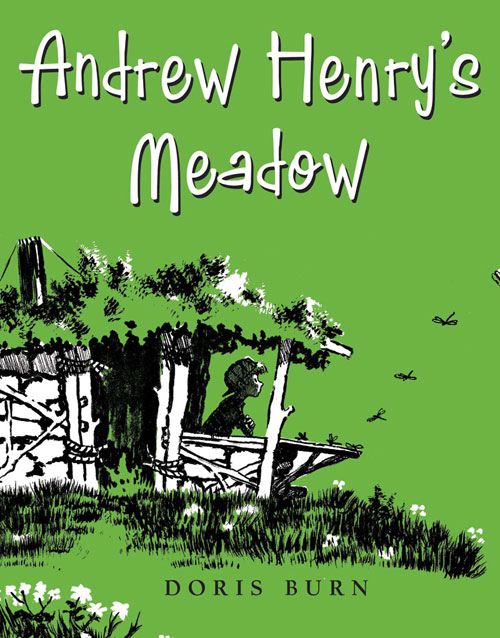 Andrew Henry Thatcher is a fictional boy in a striped shirt and ball cap who runs away from home and returns 30 pages later.

But there’s more to it than that. Andrew Henry ran away for the same reason we all do, except we never return. This 1965 children’s classic is stocked with intricate black and white drawings that cradle the very reason we leave our families. The story details why we must set off on the horizon in search of something we desire above all else. Something Andrew Henry found when he entered the meadow.

Nearly 50 years ago, Doris Burn presented the timeless story of a typical family of seven who live typical lives—all except for the middle child. “But Andrew Henry liked to build things,” is the line beneath a picture of the world’s most ambitious plant watering system, a monument of pulleys, buckets and birds. The little protagonist is an inventor. He’s a creative mind whose impractical, elaborate constructions rope in so many of the family’s personal belongings that he constantly encounters trouble. Andrew Henry consistently but accidentally invades his family’s space. So he thinks long and hard about how to resolve this unsettling conundrum and comes to a conclusion. “Quietly, he gathered together his tools,” goes the story, “He knew where he was going.”

Lucky for Andrew Henry. So many of us haven’t a clue where we’re headed when we take our initial step across the threshold of youth. All we know is that we need food, water and shelter. (Oh, and money.) To some, the shelter part seems an insignificant afterthought, flung together here and there. To others the creation of personal space is paramount. For Andrew Henry, shelter was the whole point. He didn’t simply require a place to sleep. The little boy needed a place to be. There was no separation from his personality and his surroundings. His personality required a space. His personality became the space. And in that desire, he was not alone.

The creation of expressive space is not just a complex concept reserved for those rich enough or vain enough to develop an enviable structure built simply for the sake of envying. The staying power of this story, recently released in its third edition, proves that many of us agree with its sentiment. At a very basic level, our inward identity demands an outward parameter. A quick glance inside a corporate cubicle will reveal at least one action figure, comic strip or family photo. We need room to express what we are and what we want to be. It’s not only natural, but essential. The story of Andrew Henry and the meadow he absconded to is about that need for a creative space—even if you don’t consider yourself a creator. 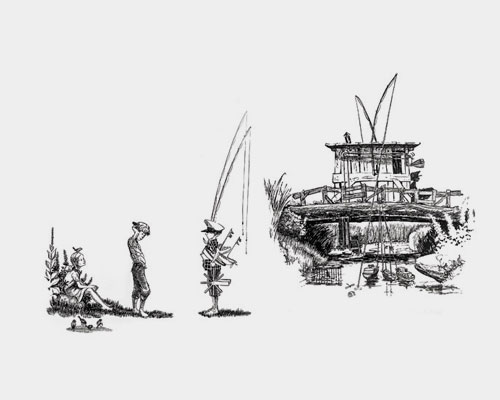 No sooner does Andrew Henry settle into his meadow home when another abject victim of an uncompromising societal structure comes along looking for a place to call home. It’s little Alice Burdock. With leather Mary Janes buckled across her feet and birdcages wedged beneath her arms, Alice left her family because of her affinity for birds. Her appreciation was unappreciated by her father, a farmer who hated all things avian because, “They ate his cherries, scratched up his corn and nested in his barn.” By not leaving room for Alice’s inspiration, the Burdock family left no room for Alice. So, being the innovative, charitable boy that he is, Andrew Henry (who obviously accepts anyone who will in turn accept him) builds Alice a house high up in a tree where she can keep all the feathered company that flies her way. As such, the beginning of an outcast society takes shape.

This slim book does more than charm, it begs us to ask ourselves, is our society that different from the one that forced Andrew Henry out? Do we marginalize our creative sons and daughters because they incite hiccups in the windpipe of our productive breathing? Regardless of the elusive answers to these questions, let’s ask a smaller question for now. Do we, within our own four walls, exhibit an environment that is conducive to our own creative nature? Creative in a sense that we make something from nothing—a computer programmer creates logic within overwhelming data sets, an actuary creates understanding within probability, a secretary creates systems to order time. No matter what you do, you are making something up. So no matter where you live, you need a space that sings of your spirit, because being human means being creative and having a visual representation of that truth. By definition, you are a creator. Someone who makes something out of nothing.

Meanwhile, back in the meadow, Andrew Henry constructs spaces for seven more children who left home for very specific reasons, but ultimately the same reason. There wasn’t enough room, figuratively or otherwise, for who they are in their former homes. Joe Polasky wanted an underground home for himself and his pet mice, rabbits and moles. Margot LaPorte wanted a space where she could practice her music in peace that was also soundproof for the peace of others. “Soon nine houses stood in the meadow. It looked like a small village.” The children who fled from Stubbsville—said fictional town—are ultimately creatures of contact who want their space, but don’t want it at the price of being alone.

Then what about the families they left behind? Are their interests and priorities not as valid as those of their offspring? The answer is no, but the families in this story represent a facet of our cultural mindset that warrants some prodding. It seems that wherever practicality, productivity and profit reign, these principles are accompanied by an overwhelming amount of ugly. Ugly furniture, ugly cars, ugly homes and ugly shops. Ugly. But what’s worse than eyesores in their unimaginative multiplicity is the abhorrent lack of self-expression that plague the people who inhabit these spaces. They seem to have failed to notice or perhaps forgotten that we are what we live in. Mediocre furniture and a centralized, oversized television can represent a mind that doesn’t know what it wants and so must be told, and a psyche that can’t conjure its own entertainment. It may seem trivial and tired to poke fun at dowdy mainstream decor, but how loud do we have to laugh until people realize that the draining of their creative consciousness is anything but funny? Many of us value ourselves so little that we can’t even remember who we are by simply looking around our own homes. We don’t take even a little time to make things right in our constructed environments. Again, this is not an issue of money. Andrew Henry built highly-intentional shacks in which the citizens of his utopian movement were happy to dwell. And though they may be two-dimensional, the kids in this book point out that the crux of modern living has much less to do with what you gain than what you take away. We don’t need (and don’t know we don’t want) a huge percentage of what we work so hard to obtain. This is not a novel statement, but simply one that we forget over and over until the ugliness piles up so high that we choke on it. So what did the wheezing, coughing families who lost their expressive children do then? 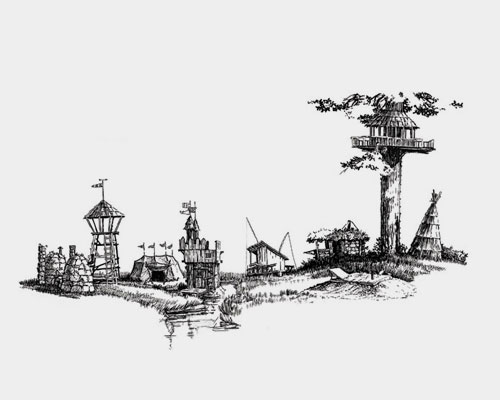 “For four days and four nights everyone searched frantically. They hunted in the fields and the barns, the buildings and the vacant lots. But the children could not be found.” Of course they’d be negligent fictional parents if they didn’t go out looking for their fictional children, but what’s more important is that when the annoying, eccentric members of the Stubbsville society went missing, it didn’t make their efficient town better. It made it worse. We may snicker at the obtuse concoctions of society’s most prominent creators, but we most certainly celebrate them once they’re dead. There are always benefits in celebrating creativity, from conception to retrospect. Even monetarily.

The bulk of the tourist world with their tourist dollars is not interested in our governmental repertoire nor our outstanding enterprise. They come here for the art. Charleston, South Carolina and San Francisco are premier tourist cities in our nation because of their denseness of beautiful architecture, refined culinary talents, richness of visual art and the creative habitants of these places that lead the way. And yes, of course calculated order and cooperation are what make any society thrive. Fruitful societies exist with a symbiosis of planning and philosophy—but when the love of structure snuffs out the desire for expression, then the society functions at a deficit. When we fail to make our spaces true physical models of our inward desires, we forget those desires. And then we lose them.

Even the man who created the world’s best toilets knew this. John Michael Kohler, founder of the Kohler Company, meditated on the words of Victorian art critic John Ruskin and had them hung in stained glass above the room where his immigrant workers dined. They were: “Life without labor is guilt. Labor without art is brutality.” Art is expression, plain and simple. Outward expression is living in its purest form. We all create a space that exhibits our qualities, even if those qualities are unintentional and unsightly. Boredom, exhaustion, anxiety, curiosity, compassion and talent all come out of the woodwork when given the opportunity to assemble our surroundings. And no, creative expression cannot flourish without the framework of fundamental needs, which is why Andrew Henry and his collective of outcasts are happy to return when their families, led by Sam the dog, discover them inhabiting the meadow.

However, things aren’t the same when Andrew Henry reconciles his place in the household. “The Thatchers gave Andrew Henry corner of the basement behind the furnace just to build things in,” which isn’t exactly the penthouse, but, “Andrew Henry was pleased to have such a fine place to work.” Some space is better than no space, and that’s the very thing we set out to find the moment we left home forever—a place of our own.