The details are fuzzy. We can make out the good-natured glow of a tiny crosswalk man in the painting’s left corner, who assures us it’s safe to proceed, still, something doesn’t feel right. Two distinct human figures are centered in the street scene. It’s unclear what they’re doing, but the digital looking date and time in the left hand corner suggest it can’t be good. The title, “Attack” puts us further on edge, but can we really be sure of what’s occurring between these people? “I completely trust my instinct,” says painter William Betts in regard to his work. But when we stare into the dynamics of his paintings, can we trust ours?

The visual impact is intense, to say the least. Thousands of perfectly stacked stripes adorn each painting. It’s 2004 and William is showing his first body of work—the line paintings. They’re flawless in their layered color spectrums, causing one to question whether a human hand could have possibly applied this paint. It couldn’t. Certainly others have created line paintings in the past, but William took the concept and pushed it to its furthest extreme. “There’s no printer out there that can do that,” says Denver’s Plus Gallery owner Ivar Zeile, who was one of the first exhibiting William’s work outside of his regular market. Ivar is right, no printer is capable of applying fresh paint in such exquisite detail either. William’s method is one factor that set him apart in the beginning, and now. He created a machine that applies paint to canvas in a way that could only have been conceived by William himself.

His Arizona State University degree in painting sat on the shelf for several years while William, who was born in New York, landed in Houston in the energy software business. By the end of his nearly 10-year career he was conducting his company’s entire software operation.  Eventually, as in all careers, the ride came to a lull and started slowing down long enough for William to see ahead in the distance. He decided to hop off. Not being able to imagine his life without painting, at last he picked up a brush and sat down at the easel. He painted using the traditional techniques he’d learned, but quickly came to an unsettling conclusion.

“This is so boring,” he thought, remembering well the times he was chucked from elementary school classrooms due to his elusive attention span. Feeling that he couldn’t simply walk away from the decade worth of life experience he’d acquired in software, William made a powerful choice. He went to work developing software that could interface between a machine, paint and his own artistic decisions. The results were incredible.

William’s line paintings were intense, dramatic representations of natural landscapes, but his next phase took visual interplay even further. His moire paintings could spark an acid flashback with their complexity. To create them, he put the canvas at varying angles on an XY axis while his machine applied the paint. The rotations eventually formed images reminiscent of woven rug patterns, but with immense density and color. Scholars and collectors both appreciated the pieces, but the conceptual evolution of his career was about to strike a chord in viewers that went far beyond their retinas.

On July 7, 2005 four bombs exploded during London rush hour. William was safe at home, but watched a broadcast of security footage taken before an explosion at the tube station he used every day while living there. The event left an imprint on hundreds of victims, and William as well. “There was this place I know and I’ve seen—and the surveillance made it impersonal,” he says. William zeroed in on the alteration of perspective that surveillance brings. It was an observation that would ultimately usher him into a profound period of his artistic career.

Perception is everything. William points out that one of the main intentions of security cameras is to alter the perception of a potential criminal. Like Foucault’s Panopticon theory, the assumption is that if people think they’re being watched, then they’ll self-regulate. “Yet it didn’t alter anything,” William points out, except for the way he perceived this uniquely 21st century method of viewing the world.

So William reconfigured his machine yet again. He departed from his color-drenched intensity, and programmed his machine to drip grayscale paint. It dried in varying forms, but mostly into shapes that looked like dots. “There’s a wonderful choreography that occurs between the machine and the operator,” William muses. Similar to the bristles on a paintbrush, his machine didn’t always do what it was told. And like any tool, it breaks. So the end result of this waltz between William and his machine were paintings that could not be duplicated due to idiosyncrasies. They were creations that beautifully combined human thought and technological utility.

But to William, the questions that arise from this body of work, such as—Is that a prostitute in a hotel room with some john? Why are they being watched? Who is watching them?—are as significant as the work itself. “The real important part about painting is what’s between the painting and the thought,” William suggests. It’s that gap that matters. People tend to focus on acquiring answers, but William is interested in the banal details. Little questions can compile an incredibly vast picture, just like the dots adorning his surveillance series. Collectively, it’s the dots in these paintings that also serve to mimic the pixilated effect of a security camera tape. Surveillance is a perspective that didn’t exist 100 years ago, and William’s artwork submits an even more complex perspective that didn’t exist until he arrived on the scene.

“There is a brilliance to his position in the pantheon of contemporary art,” Ivar insists, clearly enthused about the significance of William’s work. Back in 2005, William’s show was the first to ever sell out at Ivar’s gallery. People were drawn to his concepts and intrigued by their execution, so much that William’s work was snatched up nationwide. But eventually the tape ran out, and William had to determine what came next. That’s when he decided to allow his viewers to enter the picture.

Instinct tells us that traveling over the earth at 30,000 feet isn’t safe, but it is. Instinct also tells us that relaxing at the pool with our friends is safe, but in many ways, it’s not.Airports have an undercurrent of excitement, but they’re essentially glorified bus stops. Swimming pools have an air of elegance, but they’re where half-naked people let down their guard. There’s a lot more going on in these common places than we often conceive—and perhaps that’s the reason William’s recent work centers on airplanes, pools and beaches.

“I like my work to be very ambiguous,” he reveals, “Everyone comes to it with a different load of luggage.” And whether we have a swimsuit packed in our suitcase or not, we’re granted entrance into each of his new paintings. Literally. William’s mirror paintings are carefully executed with a newly configured machine and pieces of mirrored Plexiglas. William and his staff dictate to the machine how to drill tiny holes into the back of the Plexiglas, and then inject acrylic paint until it becomes domelike on the opposite side. Up close, one painting is a grid of arbitrary puffy spots, but from a distance it’s a woman sunbathing next to a yellow towel and a closed book. And floating somewhere in the scene is the viewer’s own distorted funhouse reflection. For lack of a better word, it’s awesome.

“I wanted the viewing experience to be different,” William says, hopefully realizing that his goal has been over-achieved. “He’s a genius,” Ivar states in that deadpan tone of sincerity. Describing the mirror paintings is akin to retelling dreams—it’s much better to experience them through one’s own eyes. Fortunately, this spring, selected pieces from William’s oeuvre will be on display at Plus Gallery before he dedicates his energy to an upcoming show overseas.

William’s constant evolution keeps him on the move, but at least his artistic inventions stay put at his studio in Houston. “We’ve gone through six different paint application technologies,” William says without even a hint of exhaustion. For him, creating art is not a constant struggle, but an activity that makes perfect sense in the context of his life. It’s life-giving. Singular in approach and large in scope, William’s collection of artwork has communicated thousands of words through individual images. Like a modern Morse Code, lines and dots have never spoken quite so well as they have in the past eight years whenever William initiated an incredible dance with his brainchild. 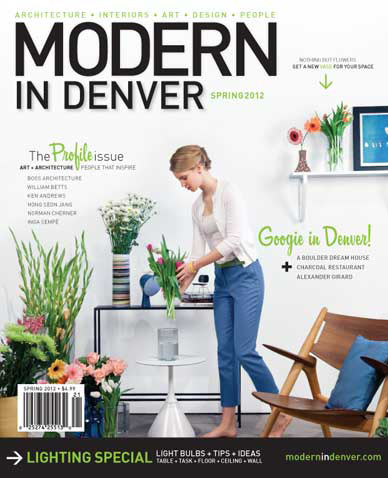 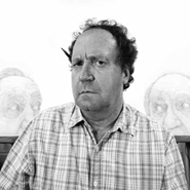