Modern In Denver proudly presents a Frazer Pogue Collective video. Since 2004 Denver native ad agency, Cactus, has housed their offices in a 1905 mercantile building on 15th and Little Raven. In 2010 Cactus partners, Joe Conrad and Norm Shearer, bought the building and in 2011 they hired tres birds workshop to renovate their space — taking it from a closed in, disconnected office to a open, airy and light filled place of work. The Cactus staff moved out for eight months while the renovation was under construction. On August 15th, 2011 they moved back in. Take a look at the photos of the building before and while under construction and then watch our short film by  Frazer Pogue Collective that illustrates the power of renovating something old instead of moving into something new. 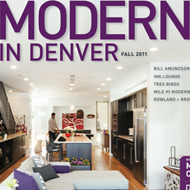