Rowland + Broughton plays matchmaker with two styles few would attempt to combine: modern and Victorian. Their recent project, The Form House, proves this unlikely pairing can, after all, be a match made in architectural heaven. 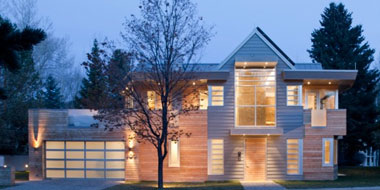 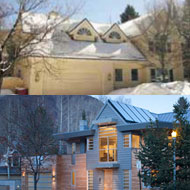 IF the fusion of modern and Victorian architecture initially strikes you as somewhat incongruous, you’re probably not alone—the two styles seem unlikely companions. However, it pleases us to report that a recently completed Aspen house has proven this seemingly improbable combination can produce spectacular results. The Form House—a Rowland+Broughton designed project in Aspen’s famed West End neighborhood—is proof positive that modern Victorian design can be a stunning oxymoron.

Originally built in the 1990s in a neo-victorian style, the house was acquired by a couple in the late 2000s looking for a home and a place to display their art collection. When approached with the project, Sarah Broughton knew the challenge would be maintaining her rational, modern design philosophy and somehow making the resulting aesthetic at home in a neighborhood of Victorian and neo- Victorian homes. Adding to the challenge was Aspen’s strict renovation requirement that 60% of the original exterior walls and roof remain in place (lest a six-figure fee be incurred). Ultimately, Broughton would leverage these two challenges into a solution: retain the large gabled roofs on the house’s two street-facing facades.

By maintaining the gabled forms, the design preserves the silhouette and scale of a Victorian house, allowing modern elements to be explored throughout the remainder of the project. Broughton was attuned to uncovering opportunities for the two styles to be integrated— the exterior siding was one such opportunity. “The exterior is a custom zinc panel in a clapboard pattern,” she says. “We liked it because it’s contextual with the neighborhood. It’s not a historic neighborhood but there are a lot of historic Victorian homes that are all painted clapboard. We liked bringing in that vocabulary but making it out of zinc—a more contemporary material that is low maintenance.”

The homeowners’ love of art along with the architects’ love of rationality led to another source of design inspiration—the art of Donald Judd. Dubbed a minimalist artist by critics, (a title he disavowed) Judd created work based on rationality, and an exploration of the spaces interrupted and created by his pieces. Among Judd’s most well-known work is his series Untitled (commonly referred to as Stacks), works composed of metal boxes stacked at a regular interval vertically up a wall (familiar if you’ve visited New York’s Museum of Modern Art). For more on Donald Judd please visit +juddfoundation.org. “The stacking windows and mullion details were very much inspired by Judd’s Stacks. That became a huge inspiration for the window fenestration pattern.” Says, Broughton.

When approaching the house’s interior, Broughton wanted to maintain uniformity of materiality throughout- nearly the entire house has 2’x2’ granite floors with an aluminum base and plaster walls. The stairs and the children’s rooms have a reclaimed teak floor. This uniform palette creates an unobtrusive display space for the owners’ art. The gabled structural elements are united on the interior through the use of a scrim that conceals mechanical systems and incorporates art lighting.

One of the homeowners’ design requirements was an elevator to address the verticality of the three-level home. “We worked tirelessly making mock-ups with a concrete subcontractor to create this elevator shaft right in the middle of the house,” says Broughton. “It’s inspired by Tadao Ando who’s an amazing architect from Japan.” The result is a perfectly smooth concrete shaft that is as beautiful as it is functional. The elevator’s Japanese inspiration was taken a step further with the use of the Tatami mat design module in its proportion. (See sidebars at right).

A change in ownership during the design process resulted in both the house and Rowland+Broughton’s design being transferred seamlessly to another art-loving couple. Miraculously, the project was set back little, if at all, and construction was completed in September 2009. Both designer and occupants couldn’t be happier with the results. “We love the house for its restraint, quality of light and design rigor. It is great to be able to create a modern house that is contextual with the neighborhood.” Says, Broughton. And it’s proof that happy unions can come from the most improbable pairings. 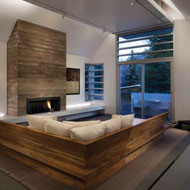 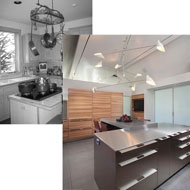 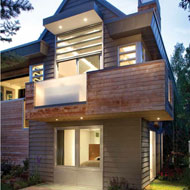 John Rowland and Sarah Broughton met in 1993 in their first year design studio at the University of Colorado, Boulder and have been together ever since. After graduation, the two had the opportunity to move to Sydney to work on the Olympic Village for the 2000 Summer Games. From Sydney the couple moved to New York to complete their internships before heading back west and settling in Aspen. In 2003 they started their own firm in Aspen and within a year and a half they added a Denver office. “I think we’re the only firm that has both a smaller mountain- town presence and an urban office,” says Broughton, “They compliment each other really well. We’ll have people from Denver come work in the Aspen office a few days at a time and then we’ve got people in Denver focusing on the urban projects and supporting the Aspen office by making trips to the Design Center- stuff like that. I think it’s a real asset to the firm.”

One thing that drives every R+B project is rationality. “We’re into very purposeful design,” says Broughton, “Almost 70% of the work we do is remodel. We also do ground up but we really like coming in and cleaning up spaces, making it rational, making it purposeful. That’s one thing you’ll see throughout all of our projects- purpose. There’s not a lot of waste.” R+B also enjoys the challenges of working at every scale. We’re working on a 15,000 square foot house right now, and we also have clients moving into a 2,000 square foot condo today. And we’re doing a ranch for someone with 60 buildings so we have all these different scales going on, which I think really informs our work.” says, Broughton. With the majority of their work being here in Colorado, the firm knows exactly how to design for some of the state’s unique challenges. “One other thing that I think would characterize us is the use of natural light. Living in Colorado, that’s so important and we consider that a lot in designing our windows and apertures. It’s something that is super important, especially here.”

In 2009 AIA Colorado bestowed R+B the coveted title of Young Firm of the Year. With approximately 100 projects built in Colorado R+B is a prominent figure in Colorado’s design-scape. You may have already enjoyed one of their spaces without even knowing it- if you’ve ever taken a flight into or out of Concourse B at DIA you can thank R+B for their design of the mezzanine level- completed in 2008. Among their current projects is the remodel of Aspen’s St. Regis Hotel- soon the world’s most wealthy and elite will be among those to experience the work of R+B.

The interior design of the Form House was by L.S.D Interiors.